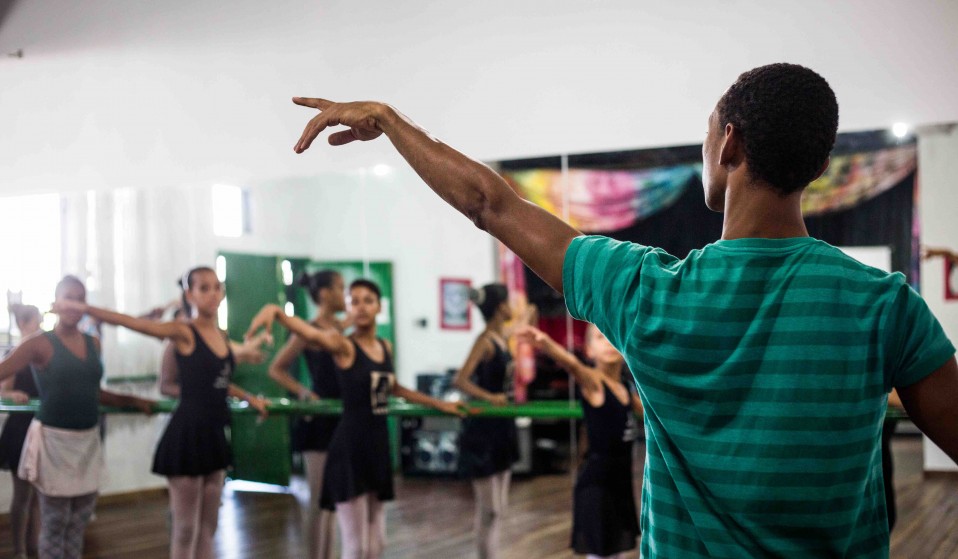 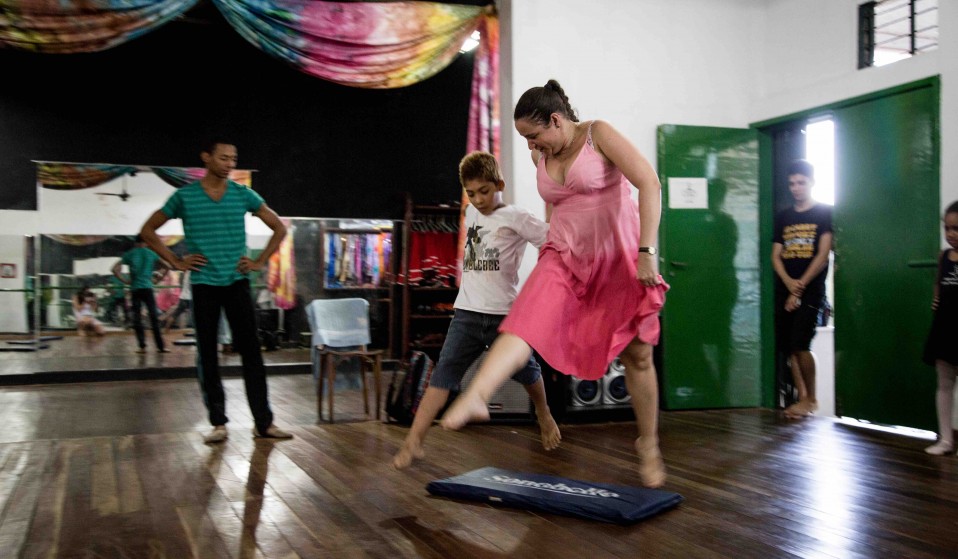 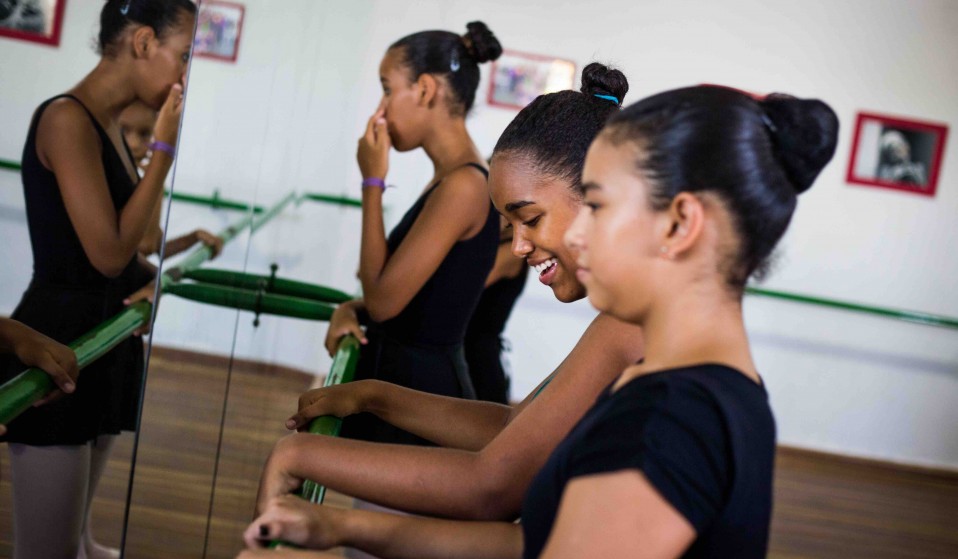 Rio de Janeiro’s Ballet de Santa Teresa is providing hope, education and a safe haven for some of the most disadvantaged children in Brazil.

Rio de Janeiro’s Ballet de Santa Teresa is providing hope, education and a safe haven for some of the most disadvantaged children in Brazil.

Down a quiet road, two bright blue steel gates open to a pathway decked with native tropical plants, signalling the entrance to Ballet de Santa Teresa, a free ballet school that caters for girls and boys between the ages of three to eighteen, from nearby Favela Morro dos Prazeres (‘Hill of Pleasures Slum’).

The fifteen-year-old project was born out of Vânia Farias’ lifetime passion. “I decided I was going to be a ballet dancer at four years old. From the window at my mother’s work I could see a dance studio. I asked my mother to put me into ballet. It was not easy, but she never abandoned my dream,” she recalls. “We grew up in Santa Teresa, it was actually a poor area at the time, but I always believed that life could be better.”

Now in her forties, having enjoyed a career as a ballet teacher, she decided to start a school of her own when a little girl, named Teresa, from the nearby favela, asked Vânia, ‘Aunty, when will you teach me ballet?’

Vânia still remembers that moment vividly. “I was bewildered and unprepared, so I didn’t answer,” she says. “I walked around the situation, but I left with the uneasy question still within me. I soon learned the little girl was a resident of the slum. Never in my life had I entered a favela. But I sought the president of the Residents’ Association and offered to do a project in the community with classical ballet. She loved the idea and gave me a space in the basement of their headquarters.” 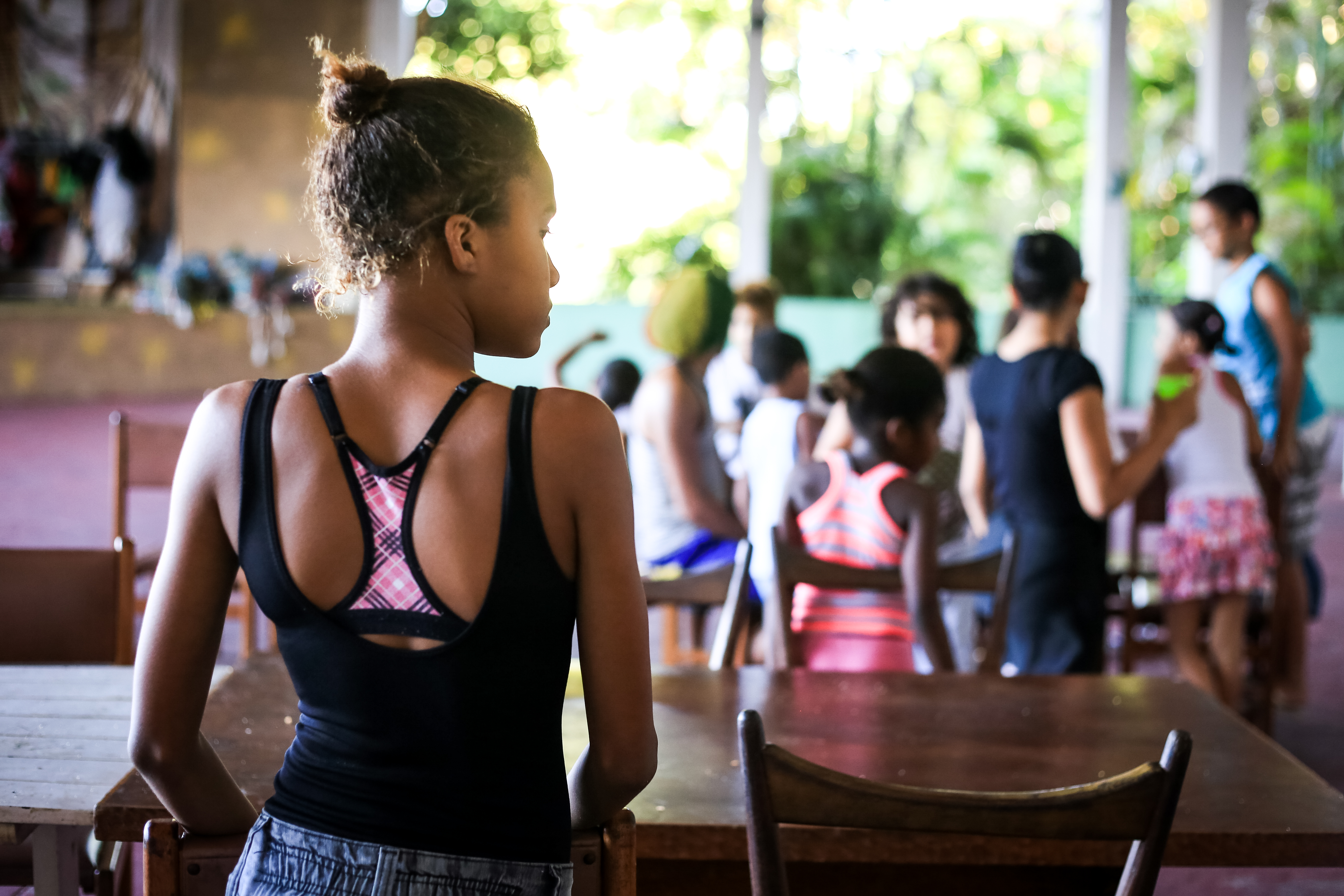 There were twelve children on the first day of class, among them was little Teresa. It was not an easy place to work; the windows had no glass, when it rained it flooded, the space was dotted with broken chairs and there was a ditch running through the room that was covered by precariously placed planks.

The school grew rapidly – in a couple of months the alumni became forty students and moved to a larger studio – and, in 2001, Vânia moved the school out of the favela and into nearby Santa Teresa where the ballet school, as it is now, was forged. Today the school caters to over a hundred children and teens, offering free ballet, music and literacy classes attended by all students, daily. But perhaps, most importantly, it provides a safe haven for some of the most disadvantaged children in Brazil.

The school has proven a huge success, as embodied by its first student. “The girl who asked me that question all those years ago, Teresa, now works here. She is a writing and reading teacher. She still lives in the favela,” says Vânia.

Another sign of success is the school’s high-profile “godfather”, Royal Ballet dancer Thiago Soares. “The children united themselves and each wrote him a letter to call his attention. He is also from a poor community in Rio and when he was reading those letters he saw himself in them, and was so emotional. Months later he came here and adopted the institution,” Vânia twinkles. “He has a very special place in his heart for the boys, because people see boys that practice ballet with bad eyes. He comes here and talks with them to motivate them.”

A group of elegantly attired students gather in the dance studio for the first class of the day. Here the girls, hair pinned back, and boys, donning ballet slippers, stretch before class. Then, as the music begins, the teacher takes them through graceful sequences, executed with delicate perfection. The hours wile away as they practice pirouettes and pointed toes: a steep contrast to their everyday realities at home. 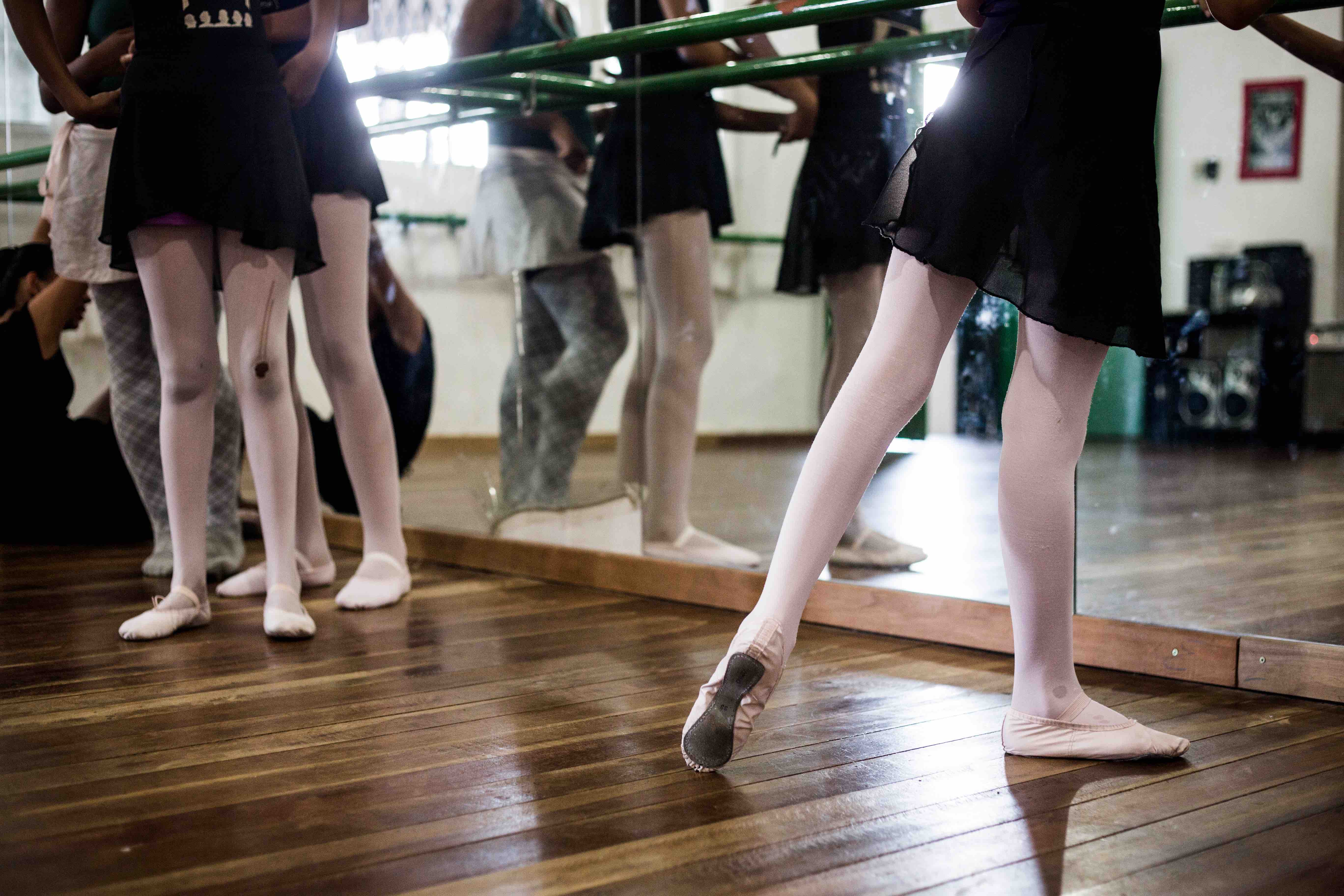 “Favela life is full of challenges,” says Vânia. “The only public service that reaches this part of the city is the police. The houses are extremely small and there is no space for the child to develop fully. Basic sanitation is a luxury in most slums and garbage accumulates everywhere.”

Despite their prevalence, the slums are the invisible neighbourhoods of Brazil. Some are lawlessly controlled by drug traffickers, while others have been ‘pacified’ – a local term that infers police have taken back control.

Morro Dos Prazers has been considered pacified since 2007. Pacified favelas are scattered with heavily armed police checkpoints. Despite the diminished threat of violent drug dealers, corrupt police pose their own kind of threat. And then there’s the militia.

Many of Rio de Janeiro’s slums – pacified, or not – are under the absolute control of the mafia-like militia; factions of policemen, ex-policemen, firefighters and military who have often been known to resort to brute force in order to rule the every move of favela residents. In some cases, they use police equipment, maintain constant communication with the police and act as a proxy for them. In some areas the militia control many aspects of everyday life, from who people vote for in elections, to where they buy their gas. Some also enforce illegal ‘taxes’ on those who make a living in their territory such as shop and bar owners or taxi drivers.

“The police are sometimes even more dangerous than the drug traffickers. There is also the violence, domestic and within the main community due to drug trafficking, but our biggest worry is the sexual exploitation of the children and teens,” reveals Vânia.

The government and media appear to be disconnected from these neighbourhoods, preferring to direct the public’s attention away from the crime, poverty, drug addiction and corruption. Instead, they dangle the juxtaposing image of rich Brazilian society in front of the world’s eyes, so that the realities of life for the average favela child is overlooked or forgotten. 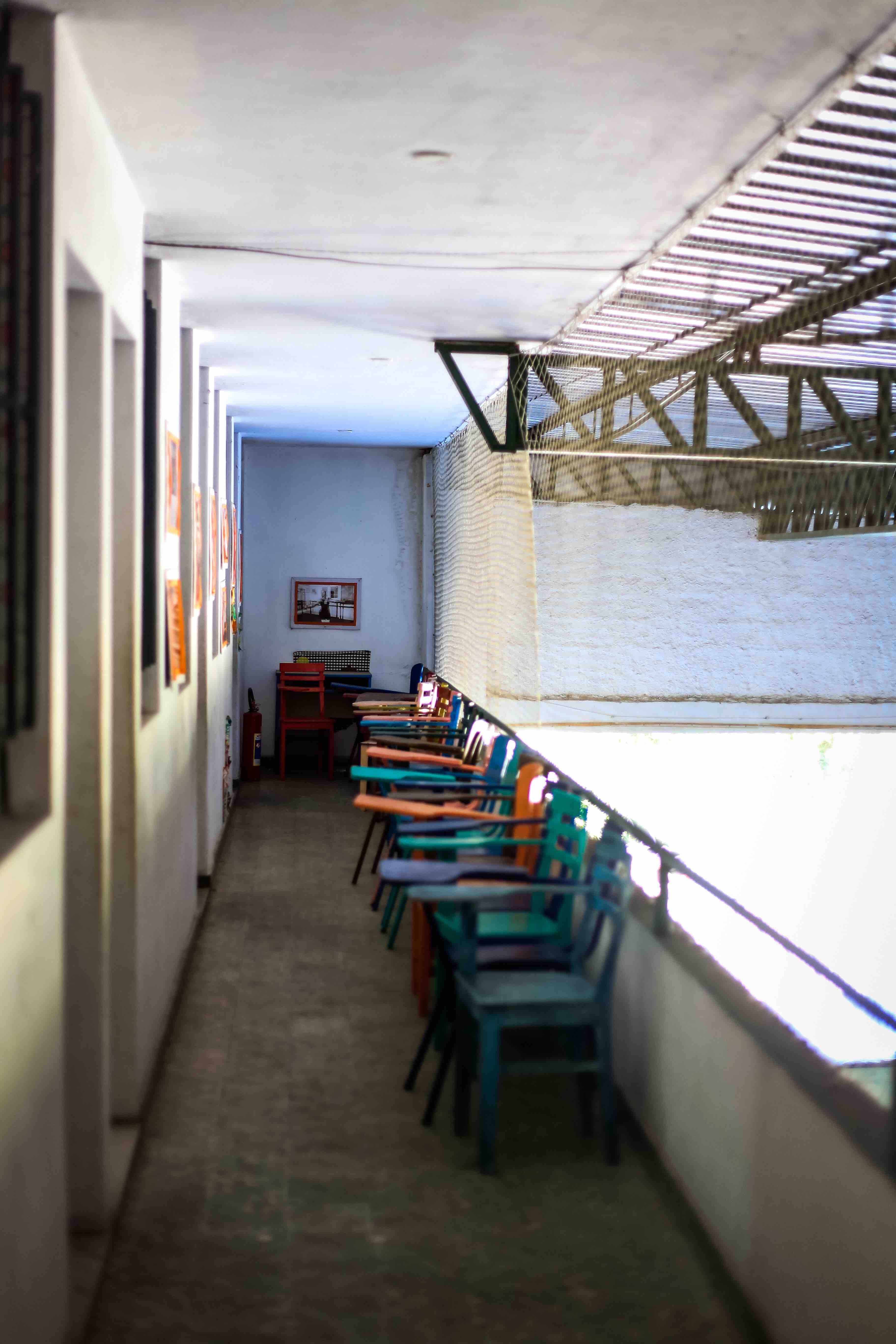 The belief at Ballet de Santa Teresa is that change starts at home. An in-house team of social workers and psychotherapists are on hand to guide parents, many of whom had children at a young age. “Many parents don’t know what to do with their children,” explains Vânia. “Then there’s the domestic work exploitation of kids which is what we call ‘invisible abuse’. Many parents abuse the kids by putting them to work when they are not supposed to. This is the most worrying issue because it is widely accepted in Brazil as normal.”

Education is therefore at the forefront of the school’s ethos. With ten per cent of the Brazilian population illiterate – according to World Bank statistics – the institution hopes to make a change with the families they are able to reach.

“Many of the kids didn’t have any kind of dream when we started with them, now they’re finishing high school and are attending college,” explains Vânia’s twenty-one-year-old son, João Pedro, who sometimes helps his mother.

Despite the positive growth seen in the children that attend the school, support for social causes from the Brazilian government is extremely hard to come by without the right connections.

“The government help a little, but there are many problems, like sometimes they don’t sign the support and then the institution doesn’t get the money,” Vânia explains. “Corruption is still a legacy of the time of [colonisation]. The government said in 2013 that there was a boom. It didn’t exist; we call it the ‘creative economy’. They didn’t have the money that they said, so they had to get money from other parts to justify it for the World Cup. The first place to get hit was social causes like us.”

These cuts have made it more difficult for the centre to receive government funding and in the last six months, Vânia has, for the first time, thought about closing its doors. As they do not ask a fee from their students, beyond capricious government funding, the institute depends on charitable donations from the public as well as from corporations – but sometimes there aren’t any. 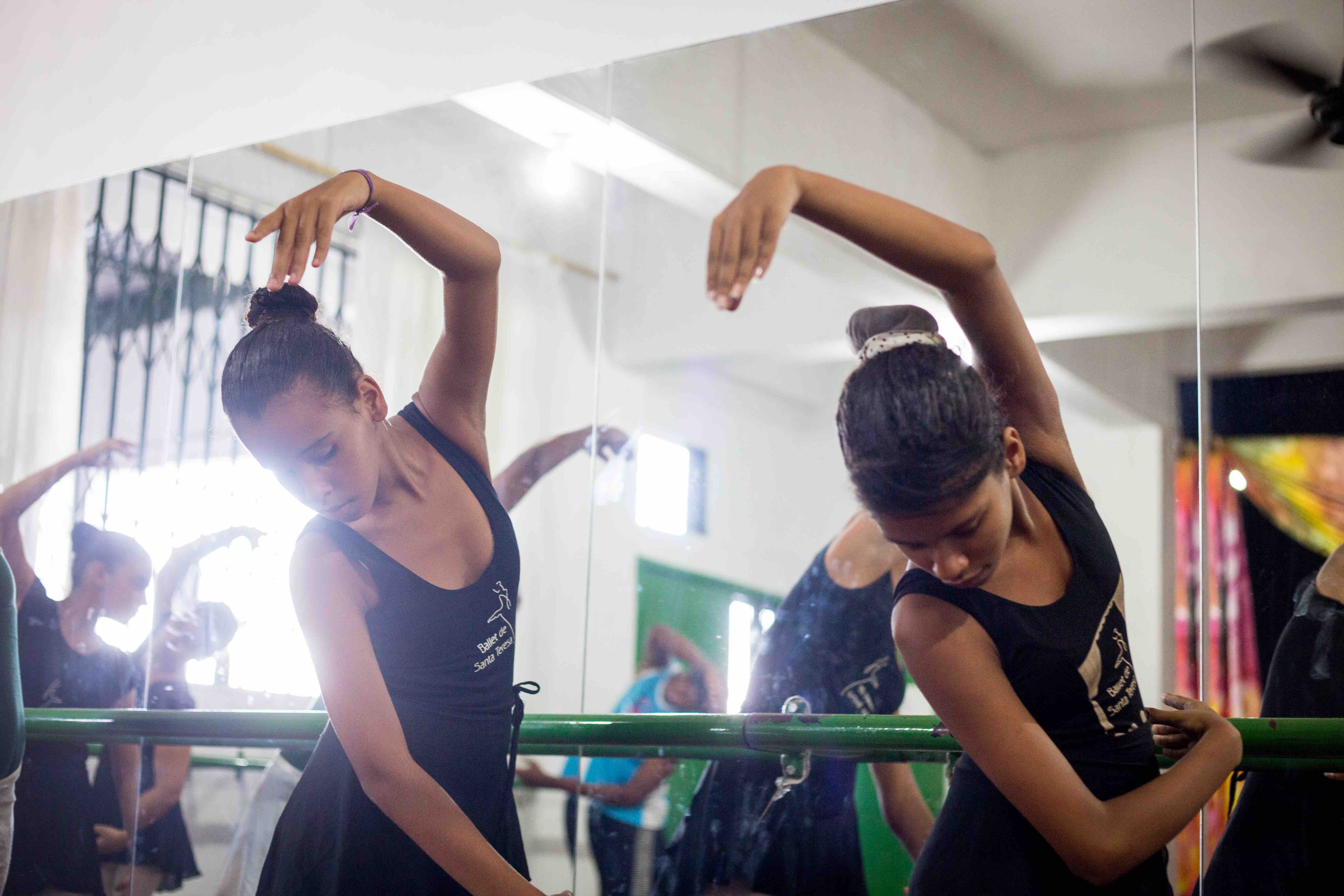 In the run-up to the 2014 presidential election, the media waves pumped out debates between president Dilma Roussef and rival candidate Aecio Neves – who beyond his right-wing, business-focused policies, is also well known for a recent scandal where he was found with 445 grams of cocaine in his possession. In late October, Roussef won the election. Her policies have helped lift nearly 40 million people out of poverty through income redistribution.

But to many Brazilians, like Vânia, the political manifestos that circulate around the polls at election time are nothing but the familiar sound of broken promises. “Education will be a success when the children of politicians are attending the same schools as the children of the slums,” says Vânia. “Candidates make a lot of promises that are not fulfilled, but most of the people still believe them. Brazilians have a very short memory.”

But, not one to simply sit on the sidelines and watch, Vânia doesn’t shy away from local politics. She is now the municipal councillor of the city’s Children’s and Adolescents’ Rights. “Our hope is that we can use the social technology of Ballet of Santa Teresa to transform public policy, so that more children and young people have free access to culture and education.”

Although the value of what the children gain in the ballet school is palpable, there is also a sense of fear – due to waning support from the government and the general public. Five years ago there were over ten social programs in Santa Teresa like the ballet school, but today it is the last man standing.

“I’m worried about society here, it’s too egocentric,” says Vânia. “People are more worried about the beauty of their avatar on Facebook. We’ve entered into a virtual world that doesn’t smell, that doesn’t have any flavour. We don’t try to help each other, we just see ourselves and let the needs of others go. We are forgetting the main thing about community, about the people being one.”

Despite the lack of support, Vânia remains optimistic that by following her life-long passion for dance – and sharing that enchantment with girls just like Teresa – the centre will continue to be there for future generations.

“The dream of being a dancer is like a spell for little children,” says Vânia. “It’s truly magical and I want to help show the children that they can grow their dreams into reality.”

Find out more about the Ballet de Santa Teresa.

This article originally appeared in Huck 47 – The Julian Casablancas Issue. Grab your copy from the Huck Shop or subscribe to make sure you don’t miss another issue.

Linkedin
RELATED ARTICLES
OTHER ARTICLES
Following the release of his latest album God Don’t Make Mistakes, the rapper talks horror villains, police brutality and being unafraid to show his vulnerable side.
While protests over abortion rights rage in the US, access to abortion services is still almost nonexistent in parts of the UK.
To mark the anniversary of the mass trespass of Kinder Scout, a group of hikers came together with the intent of creating a new, fully inclusive culture for rural spaces.
Photographer Robin Graubard’s debut book offers an unflinching record of turbulence and change across the Balkans.
Our new magazine is here, starring the inimitable Mitski. Order your copy now and join us on a trip around the world.
The government’s failure to take long Covid seriously has led to the formation of a group campaigning for the thousands of forgotten victims of the illness.