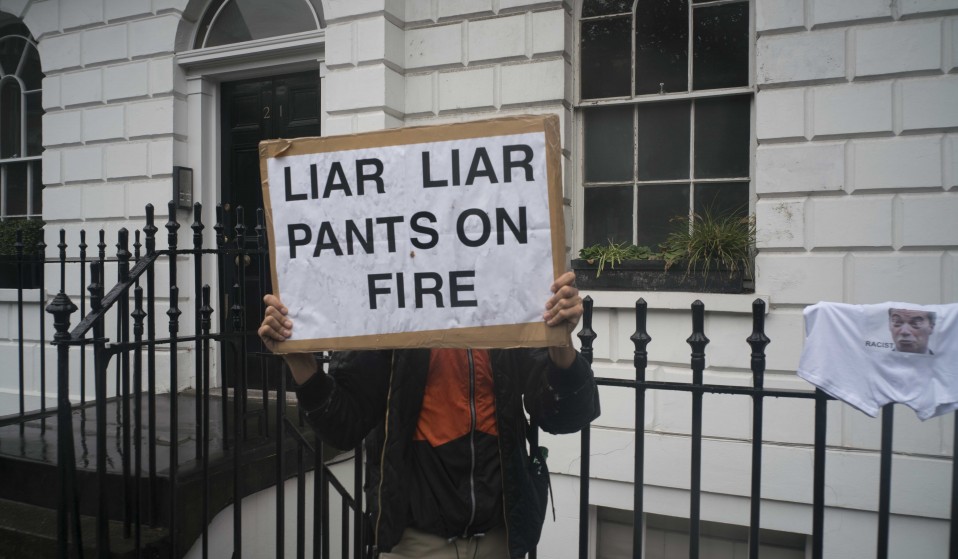 Early this morning, protestors gathered outside Boris Johnson MP's house, to highlight the lies he told in the EU referendum campaign.

The EU referendum campaign in Britain may only just be over, but both sides have already had the lies they told exposed. Early this morning, protestors gathered outside Boris Johnson MP's house, a prominent Leave campaigner, to highlight his false promises made to the British public.

At 7:00am on this grey Friday morning, standing outside Boris Johnson’s London home holding aloft a pair of pants, I asked myself, ‘How does Bojo see himself?’ Boris is no stranger to criticism and ridicule; he has been called out many times in his life for lying and fabricating evidence. Nonetheless, even for Boris, the position in which he now finds himself must seem somewhat extraordinary.

Boris Johnson championed a divisive and fraudulent but ultimately successful campaign for Britain to leave the European Union.

He told people to vote in favour of an ‘Independence Day’, a heroic moment in which Britain would boldly go where no EU member state had gone before. And yet, Boris has revealed himself as an anti-hero. Having got the result he wanted, engendering an economic and constitutional crisis in doing so, he is passing on the opportunity to follow through with his vision and lead.

This begs the question: did Boris think his vision through before persuading people to vote for it? The Leave campaign falsely claimed that costs to the EU are £350 million per week and promised a better-funded NHS, a barrier to the free movement of people, a stronger economy, international acclaim, and a return of British sovereignty. 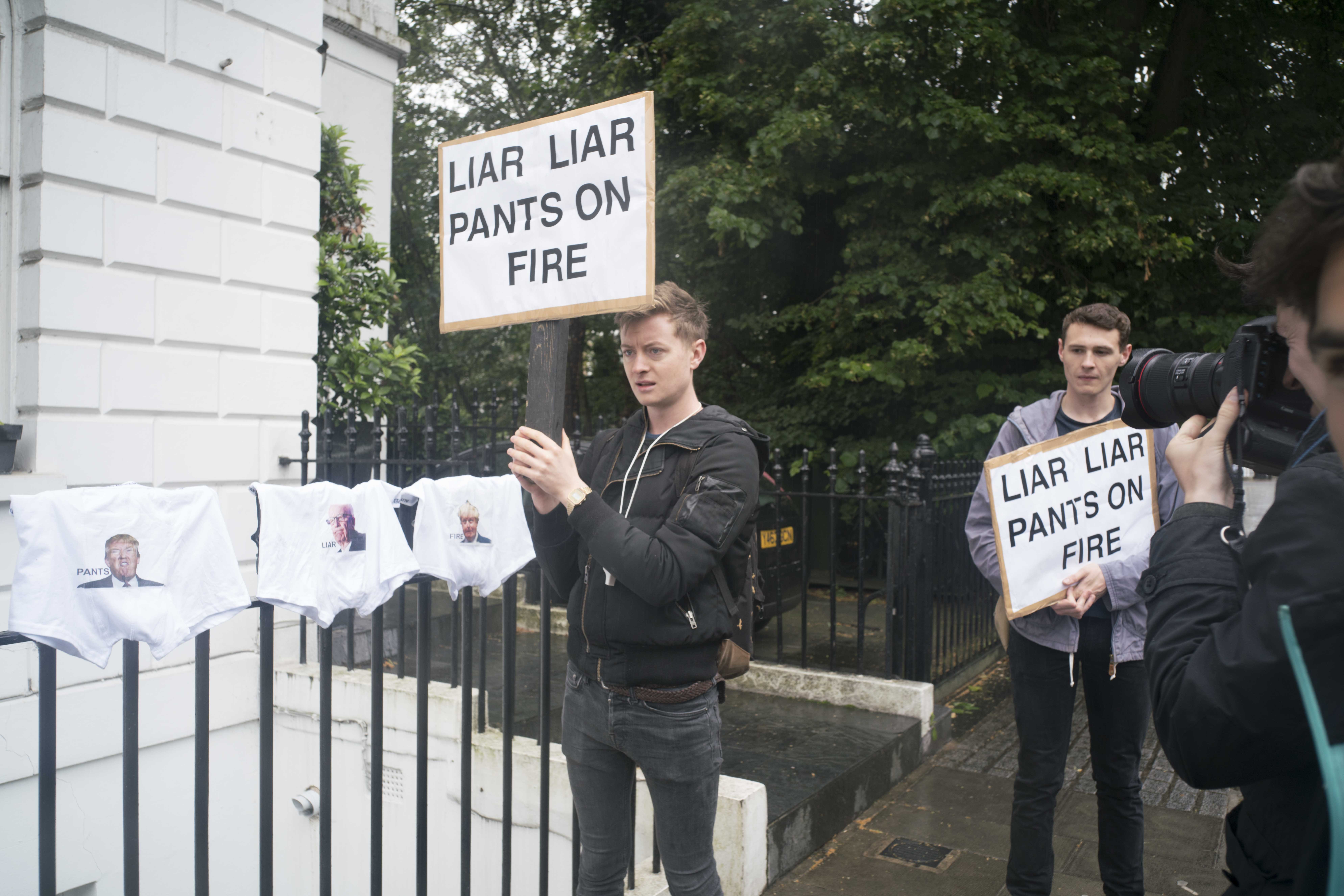 These promises now seem laughable. The NHS, we are told, will not receive extra funding. Britain cannot access the single market without adhering to the principles of free movement. The economy is descending into chaos, and there is no plan for its resurrection as the Tory party descends into infighting.

People around the world are laughing at us. People within Britain are crying and shouting with rage and frustration [meanwhile I’m still standing outside Boris’ house with pants – which are now aflame!]. Westminster is in crisis. The nation is divided, and a wave of racist abuse has swept Britain’s streets. How any of this is a victory for British sovereignty, I do not know. And Boris is turning his back on it all.

The faces of Rupert Murdoch, David Cameron, Donald Trump, Michael Gove and Nigel Farage are also printed onto five other pairs of pants which we are holding up while we chant: “Racists, Liars, Pants on Fire!”

I listen as a campaigner and medical student standing next to me tells the BBC reporter: “No single politician is responsible for the mess that we are in, but these six rich white men are all part of the same problem: power-hungry, careerist, xenophobic liars, leading political campaigns of division through peddling fear and hate.” 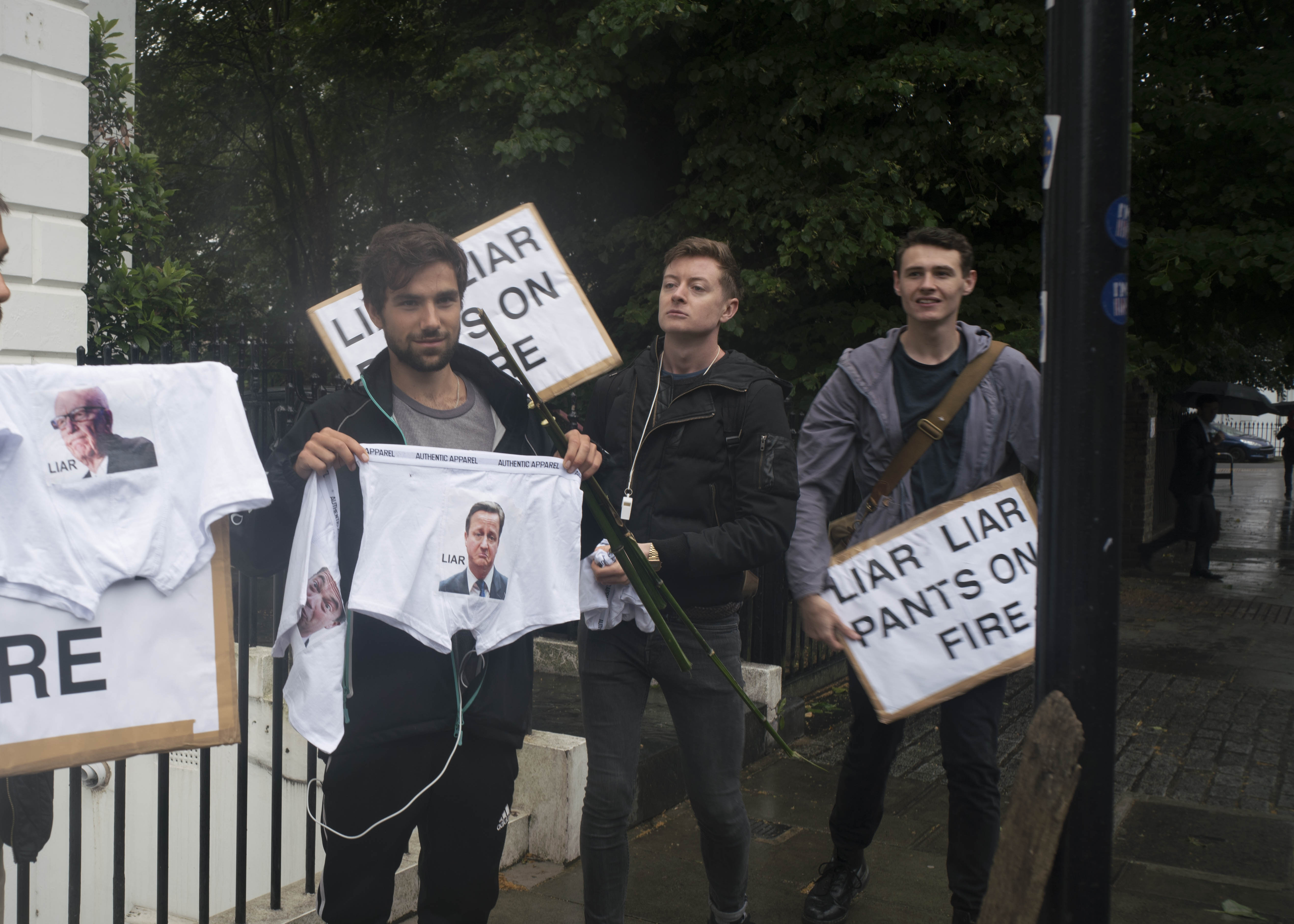 “The NHS desperately needs more funding,” they continue. “While the public will be paying for their mistakes in the Brexit vote for generations, these politicians must be held accountable for their promises. The propaganda machine that is Rupert Murdoch must be stopped and we demand that politicians and the media return to transparency, accountability and truth.”

So how does Boris see himself? The way I see him, he has created chaos. He has been stabbed in the back by his closest advisor. He lead a campaign that went against the wishes and the interests of the city of London, which, until very recently, he had been elected to represent. Londoners loathe him – he is routinely heckled on the street and outside his home. Surely he has been exposed as a self-serving, opportunistic liar. 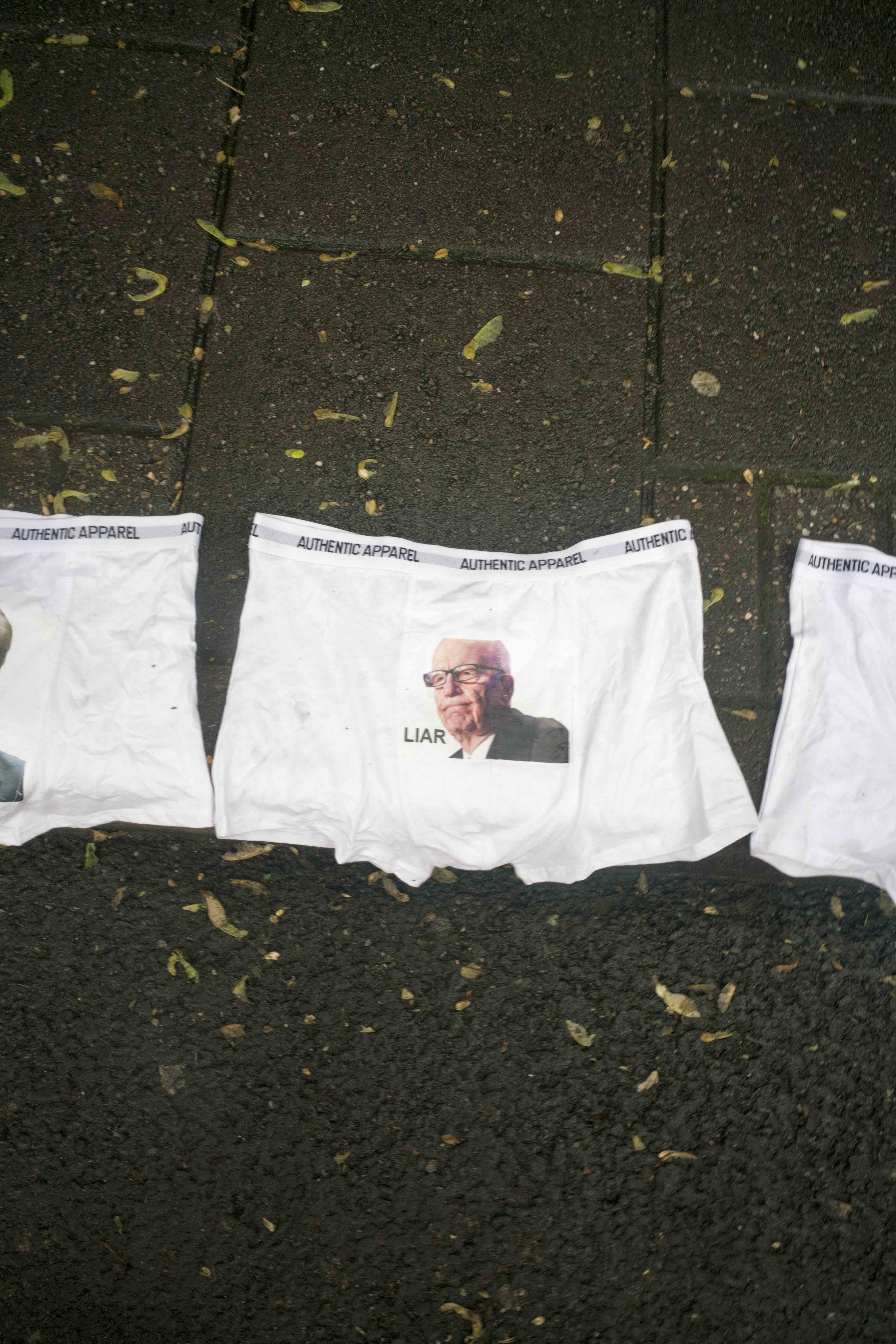 Perhaps all this washes off his back like drops of water on an otherwise oblivious otter. We may never know, but I hope that the country can see through his lies. And it may be a long shot, but I hope that, if he has a shred of credibility, he will now admit that it is not in Britain’s interest to leave the European Union.

Reddit
RELATED ARTICLES
OTHER ARTICLES
The 25-year-old talks history, heritage and why he wants to help build a new movement of independent Asian American farmers.
Campuses across the country have closed in response to the coronavirus crisis – but what about the students who have been left behind?
Photographer Weegee would spend his nights roaming the city, documenting its secrets, subcultures and forgotten inhabitants.
The city has changed immeasurably during the coronavirus crisis, with the future more uncertain than ever.
The head of XL Recordings has jammed several lifetimes into his 49 years. Here, he shares some of the advice he’s picked up along the way.
In the first instalment of a new series supporting locked-down artists, Miranda Smart shares how her work evokes the world outside her window.