News & Politics / Reportage / Can a renters union really help you take on your landlord? 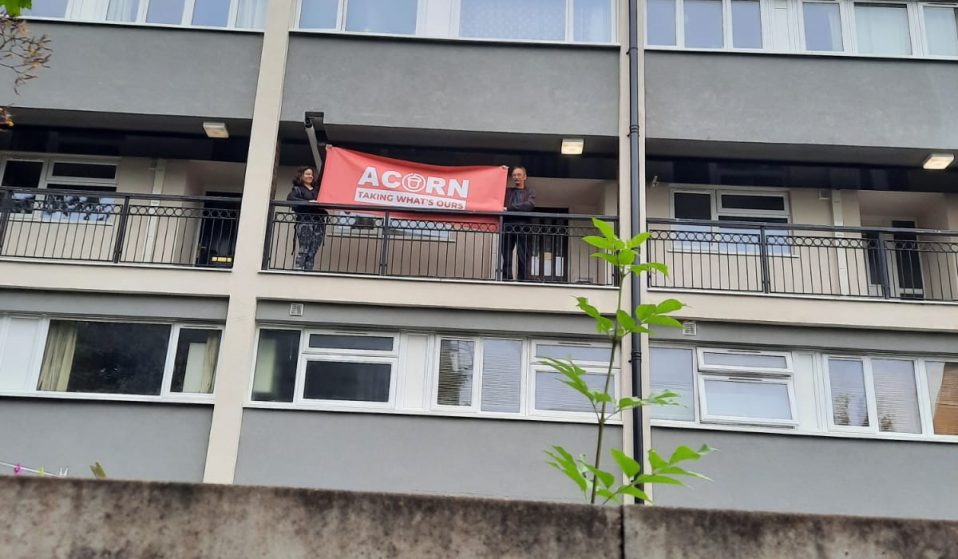 Across the country, landlords, letting agencies and tenant management companies are being challenged – and beaten – by grassroots organisers.

Across the country, landlords, letting agencies and tenant management companies are being challenged – and beaten – by grassroots organisers.

When the phones started ringing as their shift began, staff working at Nottingham City Homes (NCH) likely thought that Tuesday June 30 was going to be a busy, if uneventful, day.

The first caller to get through was 65-year old John Hiley, the owner of a leasehold property overseen by the housing management company, which is effectively part of Nottingham City Council. Hiley wanted to speak with Nick Murphy, NCH’s CEO, about a £10,000 charge* which has been hanging over his head for three years. Originally slated at £20,000, the charge relates to work carried out on his property which Hiley never consented to. He’s on a low income with health issues, so he has long been trying to convince NCH that he shouldn’t have to pay – with little luck.

Once Hiley hung up, another call quickly came through to do with the same case. The person on the phone was a member of Hiley’s tenants union, Acorn Nottingham, asking for the charge to be dropped. The next call was the same. From 8:30 am to 4:30 pm, this process repeated, call after call.

John and the union’s demands were relatively simple: to cancel the charge of £10,000 for “works started on his home nearly 3 years ago without his consent”. They were also demanding an “apology and explanation as to why this issue could not have been resolved sooner”.

Alex, an organiser with Nottingham Acorn, explains that this action is a tried-and-tested method of getting results in member defence cases, but the way it was applied against NCH was John’s idea. A reference to all the times that John had tried on his own to reach out to NCH for help, only to be ignored.

Before the “Communications Blockade” came a letter-writing campaign which saw more than 1000 emails flood NCH’s inbox. If their demands don’t end up being met now, says Alex, “we have further actions planned and ready to go”.

The vast power imbalance between landlord and tenant is an issue familiar to millions, with 4.6m households in England renting their home from a private landlord in 2018/19 (almost one in five households). But activists from Acorn, Britain’s largest tenant union, are using direct action and community organising to counter it.

While the housing crisis as it relates to the private rental sector is so often thought of as a London-only issue, the number of active tenant union branches springing up outside the capital in recent years suggests this is a shared national struggle. Private renting, it seems, is an issue everywhere: from tenants forking out huge portions of their income on housing inside the M25, to those languishing in ill-maintained properties, contending with unscrupulous landlords, along the M62 corridor. 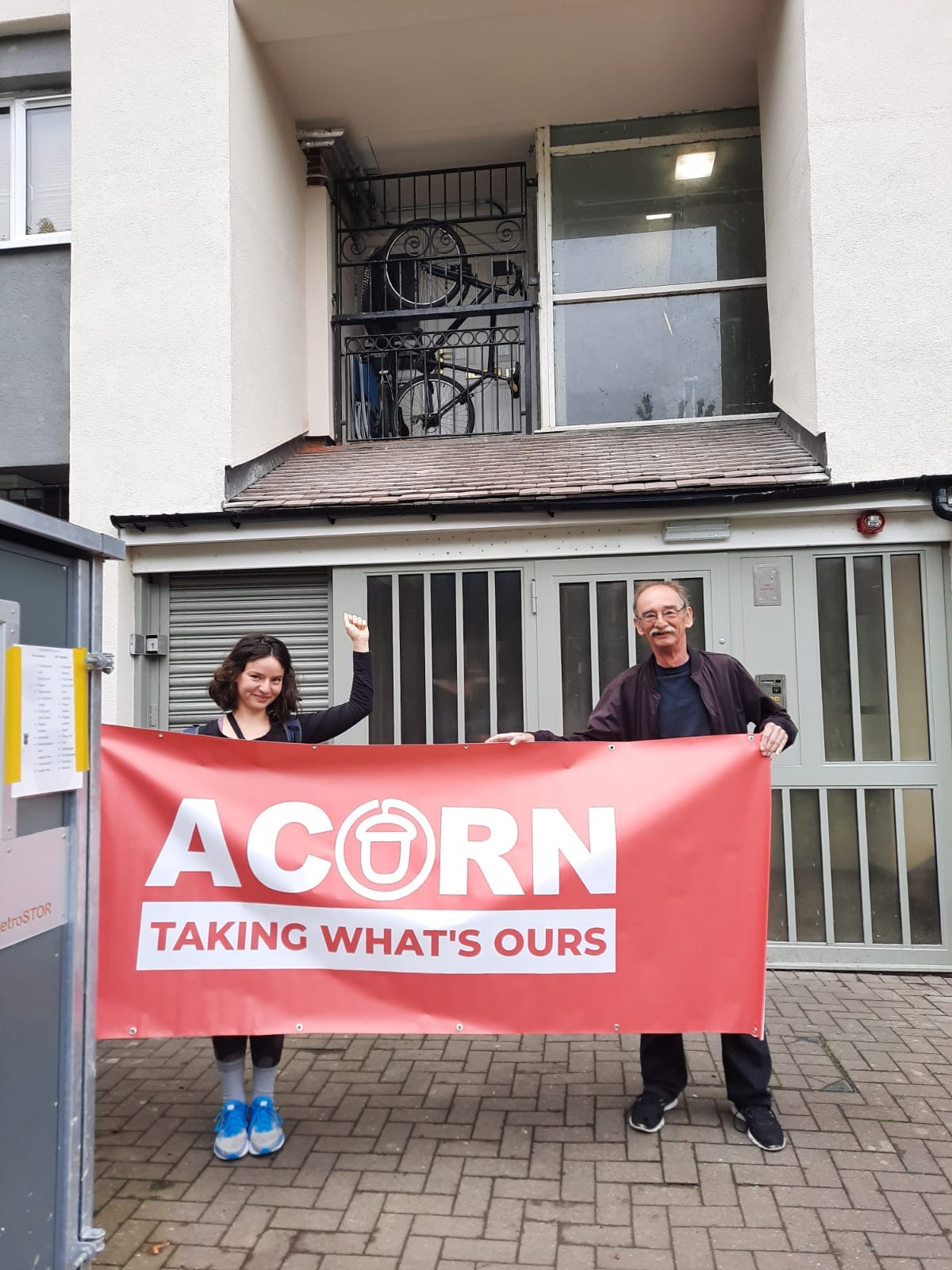 One such landlord’s day was disrupted recently, when around 30 members of Acorn’s Sheffield branch arrived at his residence in one of the city’s most affluent suburbs, intent on having him listen to their concerns. He refused to speak with them, so the activists slipped a letter listing their demands through the letterbox. Then, they waited.

Some of those present were the landlord’s tenants, forced into direct action after a proposed rent-rise, followed by threats of eviction, during a global pandemic. But most of those who turned up with signs and pickets, who stood and politely outlined to the landlord’s neighbours how he sees fit to treat his tenants, were just fellow members of the union.

Not long after they had arrived, the landlord called the authorities, and five police cars soon pulled up. According to Jamie from Acorn Sheffield, the union members refused to leave until the landlord agreed to talk, so the police ended up mediating a discussion between the two sides.

Hiley’s dispute – along with countless others in Sheffield, Liverpool, Manchester and Newcastle – are ongoing. But the tenants are confident in the strength of their union, because many cases have been settled, and many won.

Joe is a recent graduate who has just moved back home from university in Leeds. The flat he moved out of had, at one point, become so badly affected by damp that mould had sprung through the walls of his bedroom. The problem was significant, and the cause clear. A drain on the exterior of the property, located right above Joe’s bedroom, was leaking.

Despite alerting the letting agency to the problem early on, Joe had been forced to live elsewhere for six weeks because, during the two nights he spent there after the Christmas break, he could feel that he was “breathing in mould”.

Research carried out by Citizen’s Advice in 2019 found that over two years, 60 per cent of tenants surveyed experienced disrepair that was the responsibility of their landlord to resolve. One in five of those did not see repairs done in a reasonable time, with one in 10 not seeing a complete repair at all. Their research also found that one in six described the disrepair as posing a major risk to their health and safety, rising to one in five among disabled tenants. Shelter’s 2014 “Safe and Decent Homes” report found that 61 per cent of renters had experienced damp, mould, leaking roofs or windows, electrical hazards, animal infestations or gas leaks in the last 12 months. 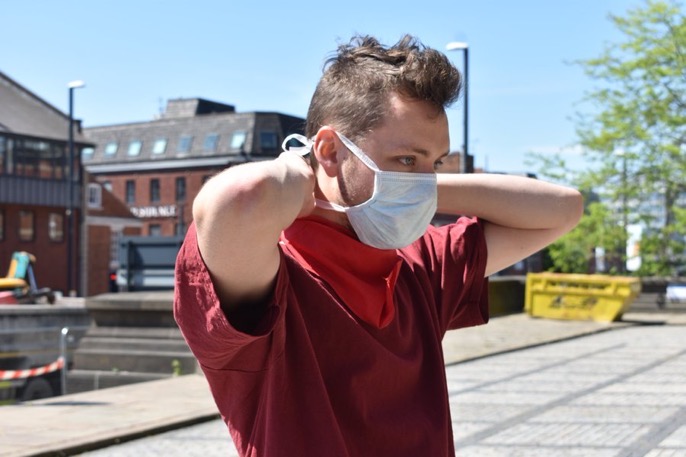 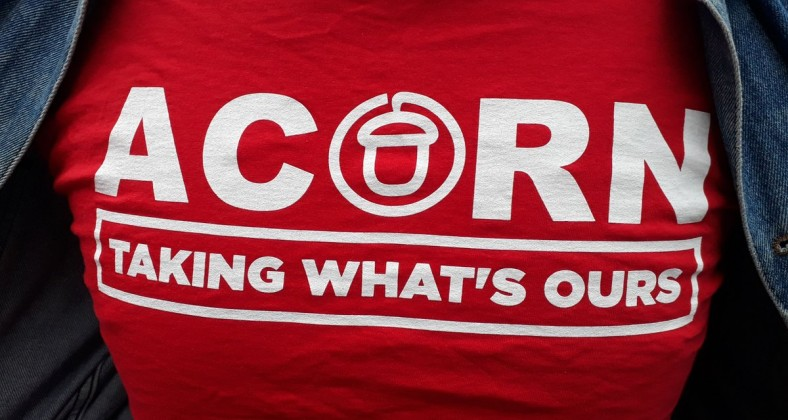 At first, Joe felt he’d be able to take on the letting agency himself. But after being fobbed off over a period of months and eventually being offered a derisory £50 in compensation, he sought support, joining Acorn Leeds.

Alongside their other campaigns and member defence cases, the union got to work. With Joe taking the lead, they settled on demands and mapped out an escalating strategy. A Facebook post, a few Google reviews and a “Communications Blockade” later, Joe got an apology from the letting agency as well as the full compensation he’d requested.

Joe was struck by the way the union were able to level-off the power imbalance between him, a student tenant who had no real idea of his rights before joining, and a letting agent who would later admit to Joe that the compensation he’d had to fight so hard for “would not make a difference to him at all”.

And Joe’s not the only one winning: in the process of writing this article, a message comes through to say another member has just won a case to have £1500 in rent waived.

“Something I found remarkable throughout was that all the people helping me – coming to my defence, carrying out all these actions on my behalf – I didn’t really know any of them, I’d never even met them,” says Joe. Now, he urges everyone facing similar problems to join.

“The solidarity was remarkable. The whole process has mobilised me, now I’m willing and able to fight for other people’s rights too – people I’ve never met.”

* When asked to comment on Hiley’s case, the NCH said: “Byron Court has benefitted from full refurbishment and green investment including solar panels and high levels of insulation, which has increased the value of the flats.”

“Resident leaseholders have a wide choice of repayment options to ensure they do not suffer financial hardship. This includes the offer of a title charge on the property, meaning they don’t have to repay the costs until the property is sold in the future. We advise and support all leaseholders with the options available – we don’t want anyone to have a repayment option which is not genuinely affordable to them.”

Learn more about Acorn, and how you can join, on their official website.

Linkedin
RELATED ARTICLES
OTHER ARTICLES
We catch up with the climber and podcast host at The Red, Kentucky – the latest stop on her perpetual American road trip.
While the rest of the world entered the uncertainty of 2021, in recent months, hundreds of thousands of Facebook users have signed up to groups that offer an escape from current times.
A new exhibition brings together the work of three artists navigating contemporary life in the US, raising pertinent questions about identity, place, migration and immigration.
Photographer Larry Racioppo remembers shooting NYC in 1979, providing a revealing glimpse into how the interwoven communities have changed since then.
Gypsy, Roma and Traveller communities are some of the most marginalised groups in the UK. As Covid-19 exacerbates the inequalities they face even further, many are now at breaking point.
Bolstered by the Capitol riots, this week, pro-gun activists, Boogaloo Boys, and Trump supporters gathered in their thousands for Lobby Day in Virginia.