News & Politics / Reportage / What can Captain America teach us about the state of US politics? 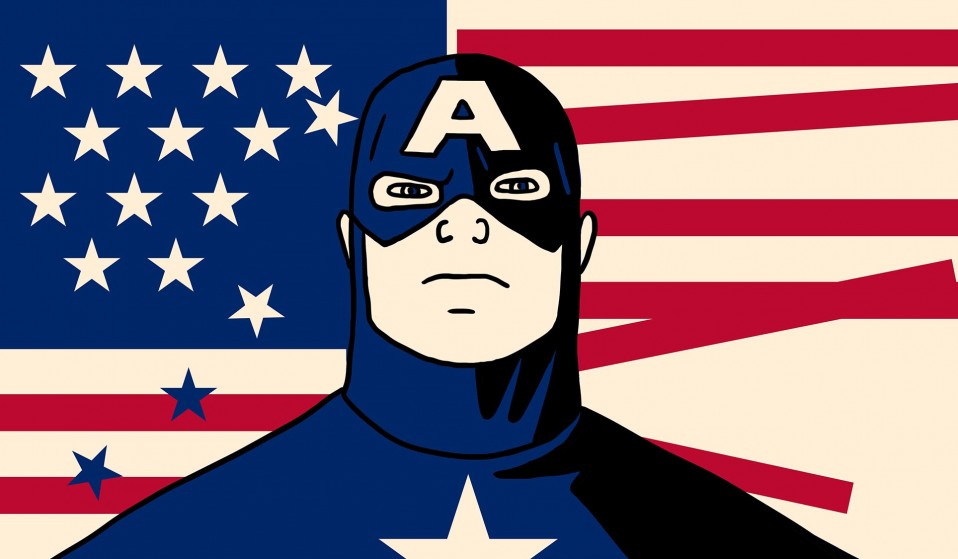 Can the story of this all American super-hero teach us lessons about the racist Alt-right and the rise of Trump? Professor Jason Dittmer thinks so.

Can the story of this all American super-hero teach us lessons about the racist Alt-right and the rise of Trump? Professor Jason Dittmer thinks so.

Let me tell you a story. It’s a story about a man who is an all American success story; a man loved by millions; a man who as President could single-handedly solve the problems facing the USA. That man is Captain America.

Indeed, the plot of Captain America #250, published to coincide with the 1980 presidential election, imagined just that scenario. Captain America, fresh from battle against terrorists, was approached by the bosses of the (fictional) New Populist Party and asked to run as their candidate.

His supporters argued that Captain America would be a real alternative to the Democrats and Republicans – a “real leader” and someone the people could trust. While Captain America would ultimately refuse the nomination, arguing sagely that the president should be someone who doesn’t wear a mask, the moment remains a crucial one for both the character and the (real) American people.

That is, the 1980 election of Ronald Reagan marked the beginning of the fragmentation of the liberal consensus that had governed American politics since World War 2, under which many tenets of American politics were bipartisan truisms. From that point on it would become increasingly difficult to position Captain America as a hero for all Americans. As the liberal consensus unravelled, so too did the easy equation of the star-spangled Avenger’s body with the American body politic. It would no longer be possible to envision a president of all the people, not even Captain America.

For several decades, the writers of Captain America had a relatively easy time in portraying him as someone occupying the absolute centre of the U.S. political spectrum.  This was partly possible because of Captain America’s role as a tool of foreign policy. Created by the U.S. Government prior to entry into World War 2, he was designed to be a super-soldier defending national interests at home and overseas.

As one tenet of the liberal consensus put it, “politics stops at the water’s edge”. So, whether Captain America was fighting Nazis, or protecting New York from an alien invasion, he was enacting a foreign policy agenda that could be embraced by both Republicans and Democrats. Beyond that, he articulated a somewhat naïve white man’s commitment to citizens’ equality as well as to institutions and their proper functioning.

When pushed by readers to reveal Captain America’s political views, the editors would respond that by dint of his place and time of birth (New York City, in the 1920s) he would have come of age as a New Deal Democrat, a positioning that located his political attitudes squarely at Ground Zero for the liberal consensus.

Any issue arising that divided that political consensus, like the war in Vietnam, was ignored (Captain America would go to Vietnam only twice, both times not to fight alongside American troops but instead on rescue missions that did not align him with American objectives). While letters-to-the-editor would fulminate over the issue, the character himself never discussed it – allowing readers who identified both left and right to continue to assume that Captain America agreed with them. After all, ‘getting political’ in a domestic sense would only lose customers.

This strategy started to change in the early 2000s. With the breakdown of the liberal consensus now well underway – and 9/11 amping up the political atmosphere -catching a hold of the zeitgeist became a way for publishers to gain attention for a medium that was rapidly being replaced by Hollywood films.

In 2006 Marvel Comics launched a ‘crossover event’ called Civil War, in which virtually all their heroes became tied up in a ‘battle royale’ that mirrored the increasing divide in American political culture. When the U.S. Government passed a law requiring all superheroes to register with the government and effectively go to work as civil servants, Captain America led the anti-registration forces, arguing that it was un-American for the state to have that much control over superheroes’ lives.

Read widely as a critique of the Bush Administration and its PATRIOT Act, Civil War culminated in Captain America being shot and killed on the courthouse steps in a scene that many analogised to the death of the American Dream (don’t worry, he was back in action before long). This perceived slight of the Bush Administration led to a vast amount of publicity, including an obituary in the New York Times and an appearance by Marvel Editor-in-Chief Joe Quesada on CNN:

CNN Correspondent: “So if the current storyline is an allegory for the post-9/11 social and political situation, what does the death of Captain America represent?”

Joe Quesada: “There is a lot to be read in there, but I’m not one that’s going to tell people this is what you should read into it because I can look at it and say, you know, I can read several different types of messages.”

It is clear from that exchange how Marvel was trying to benefit from the political resonance of the allegory, without actually committing to any particular political stance – a new iteration of a longtime editorial practice.

Similarly, in a 2010 storyline titled ‘Two Americas’ in which Captain America and the Falcon, his African American partner, investigated reports of a racist anti-American militia in Idaho, the Falcon noted that he didn’t think “a black man from Harlem [would be] fitting in with a bunch of angry white folks.”

The street scene before them included a large protest group, one of whom was holding up a sign that said “Tea Bag the Libs Before They Tea Bag You!”, a direct reference to a Tea Party protest sign from the early Obama years. Given that in the pages of Captain America the protesters were foot soldiers for the racist villain, this directly positioned the Tea Party as anti-American.

After substantial protest – enabled by the rise of the blogosphere and social media, which eventually led to Fox News and other mainstream outlets picking up the story – Marvel apologised, blaming a rogue artist, and offered to use a different sign in re-prints of the comic. Clearly by 2010 it was near impossible to garner attention by being political in Captain America without facing an immediate backlash.

Giving up on the body politic

As these examples of Captain America appearing in the mainstream media demonstrate, the comic attempted to straddle a growing divide within the American people. After all, the two storylines just cited were titled Civil War and Two Americas; was art imitating life, or life imitating art?

Media deregulation, the rise of cable television, and the coming of the internet contributed to the fragmentation of the mediasphere that underpinned the liberal consensus; Captain America was by the start of the current decade perhaps the last holdout from a bygone media world that didn’t think in terms of advertising niches and media bubbles.

In his stories Sam Wilson is a hero for the age of Black Lives Matter, fighting for people of colour and immigrants and trying to protect them from the dehumanising forces both of the state and of white supremacy. Meanwhile, the somewhat fusty liberal Steve Rogers has been transformed. Via the kind of absurd plot twist only available to superhero comics and the imaginations of three-year-olds, his entire history has been rewritten by a literal deus ex machine, the Cosmic Cube.

Now, instead of having his origins in the liberal consensus, Steve Rogers was raised to be a double agent for Hydra, the Marvel Comics version of a global Nazi conspiracy. This alternative Captain America abandons the traditional centre of American politics previously occupied by Steve Rogers in favour of the so-called Alt-Right which helped propel Donald Trump to office.

Just as there has been opposition among Internet-based fandom to the remaking of Steve Rogers into a Hydra agent, or to an African American being Captain America, within the Marvel narrative universe there has been a #TakeBackTheShield Twitter campaign to make Sam Wilson give the ‘real’ Captain America his shield back, as well as state opposition to his anti-racist advocacy.

While the themes highlighted by Captain America’s (almost) populist candidacy in 1980 were mirrored in Donald Trump’s 2016 campaign, it is notable that these values – masculine leadership, an affect (if not reality) of telling truth to power – failed to re-construct the body politic around those values.

Rather, they echoed through an increasingly fragmented media space, being received by different audiences and further being differently received by those audiences. Donald Trump’s victory in the Electoral College- despite the loss of the popular vote – reflects how minoritarian his vision of America is. The stories of Captain America, and the ways in which they have erupted into the American news cycle over the past 27 years, give us a hint of how the changing mediascape helped to produce the Trump Presidency.

Jason Dittmer is Professor of Political Geography at University College London and author of Captain America and the Nationalist Superhero.

Linkedin
RELATED ARTICLES
OTHER ARTICLES
A new series of photos by Johny Pitts shines a light on communities and subcultures that have all too often been overlooked.
Photographer Bud Glick recounts documenting everyday life in the area, and what it taught him about the Chinese immigrant experience.
Yesterday, rail workers came together to protest poor pay, working conditions and job cuts in their latest round of strikes.
The Conservative leadership contest has exposed an obvious truth: whether our next prime minister is a woman, or a British-Asian man, they will continue to fan the flames of division.
Ahead of the release of his new album, the producer reflects on his battle with drug use, getting into painting and what Madonna taught him.
Last week, Tower Hamlets council removed its nudity-restricting licensing conditions in a huge win for London’s kink community.