News & Politics / Reportage / Chile has woken: everything you need to know 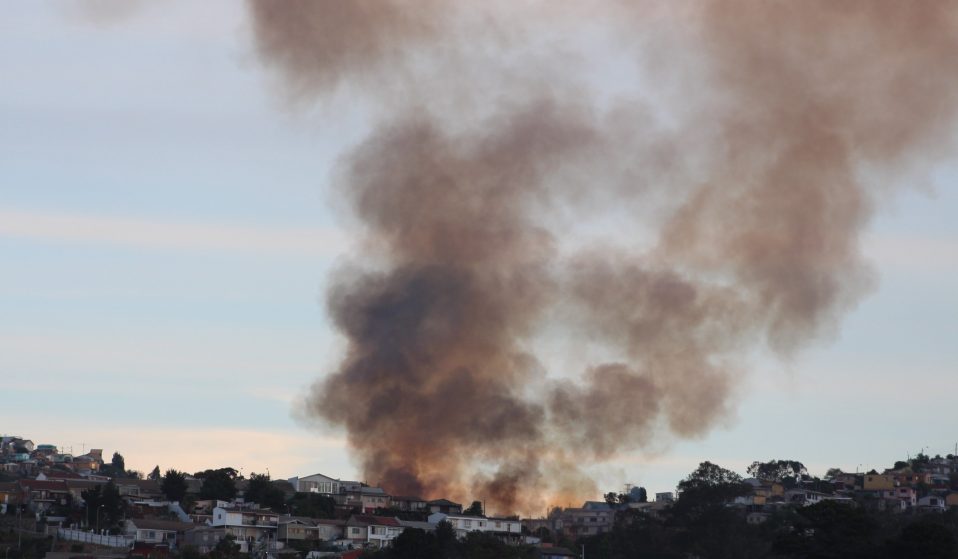 This week, Chilean protestors have been taking a stand against inequality, corruption and soaring living costs. We join them on the streets as they fight for a fairer future.

This week, Chilean protestors have been taking a stand against inequality, corruption and soaring living costs. We join them on the streets as they fight for a fairer future.

With a reported death toll of 18, almost 3000 citizens detained and thousands injured, Chile is now more than a week into its fight for human rights and equality. Today, October 25, marks its seventh day as a nation in a state of emergency.

It all began on Friday, October 11, when the Ministry of Transport and Communication passed a motion to increase the metro fare in the country’s capital, Santiago, by $30 pesos. News of presidential approval sparked a cascade of fury across the region, with students first to react in protest by jumping turnstiles in the central metro lines, refusing to pay.

Student-driven protests in and around the metro stations continued on Monday, October 14. By October 15, police forces were forced to deploy patrol forces in the main metro station entrances. The unrest expanded within the capital, taking the form of street protests, which soon unfolded into scenes of chaos throughout the country as the police began to clash violently with protestors and civilians.

The police and armed forces’ treatment of civilians has been under the spotlight, with Chileans in all regions of the country reporting incidents of gross and inhuman aggression, abuse and unjustified detainment.

The topic of military-induced confinement is, of course, a painful memory for Chile. It was only 30 years ago that the country escaped the brutal 17-year long dictatorship of Gen Augusto Pinochet, during which 3,065 deaths (and disappearances) are confirmed. Many are still haunted by the absence of loved ones that were arrested and never seen again. The personal grievances, trauma and abuse that Chileans suffered at the hands of the murderous dictator can still be felt today, which is why many are now wide awake and alert to the threat of another corrupt government. One of the campaign mottos pulling the nation together this week is “#ChileDesperto”, meaning Chile has woken.

It is surely this all too real memory of repression that has fired up a nation into a fight for equality and justice. The president and governments’ first response to the crisis was to label the protestors as delinquents and violent criminals. But after the initial days of protests and disturbances, President Piñera announced a recall of the metro fare increase motion. However, this doesn’t seem to have had the desired effect; the nation has already stirred and is determined to demand its rights.

So what is the reality for people on the streets? Since Saturday, curfews have been in place throughout the country from as early as 6 pm in order to aid the armed forces in their attempt to control the protests, stop the riots and prevent further damage to buildings and businesses.

Looting, violence and acts of vandalism, such as fires that have spread across the major cities on a daily basis, have been the most devastating consequence of the protests, with independent businesses, larger conglomerates and banks suffering from the destruction. Some of the most shocking scenes were witnessed in Santiago when, during the first two days of the crisis, riots led to the burning of metro carriages, tube lines, central banks and subsequent deaths.

As a precautionary step against the looting and vandalism, most supermarkets and larger shops have remained closed, (a select few open until 2 pm with heavy surveillance and military escorts on entrance). Suspension of classes has been applied throughout the entire education system, affecting preschools through to universities. Those who can work from home are advised to do so, and those who must go to their specific workplace are instructed to stay no later than 4pm to avoid being caught in the crossfire between protesters and armed forces in the afternoon marches. While a large portion of the population has been respectful of the curfew, many have taken to the streets and main plazas to continue their demonstrations late into the night. 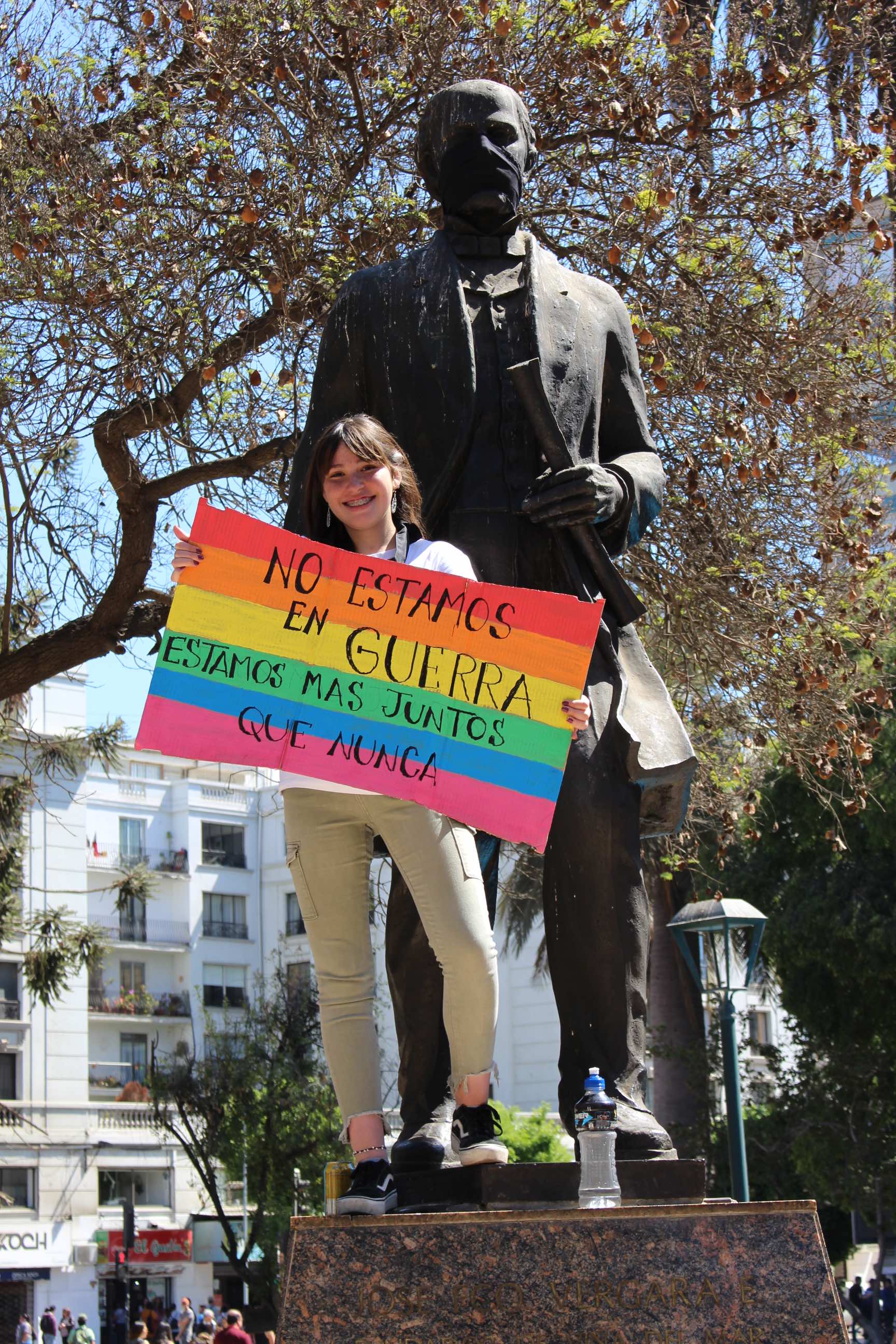 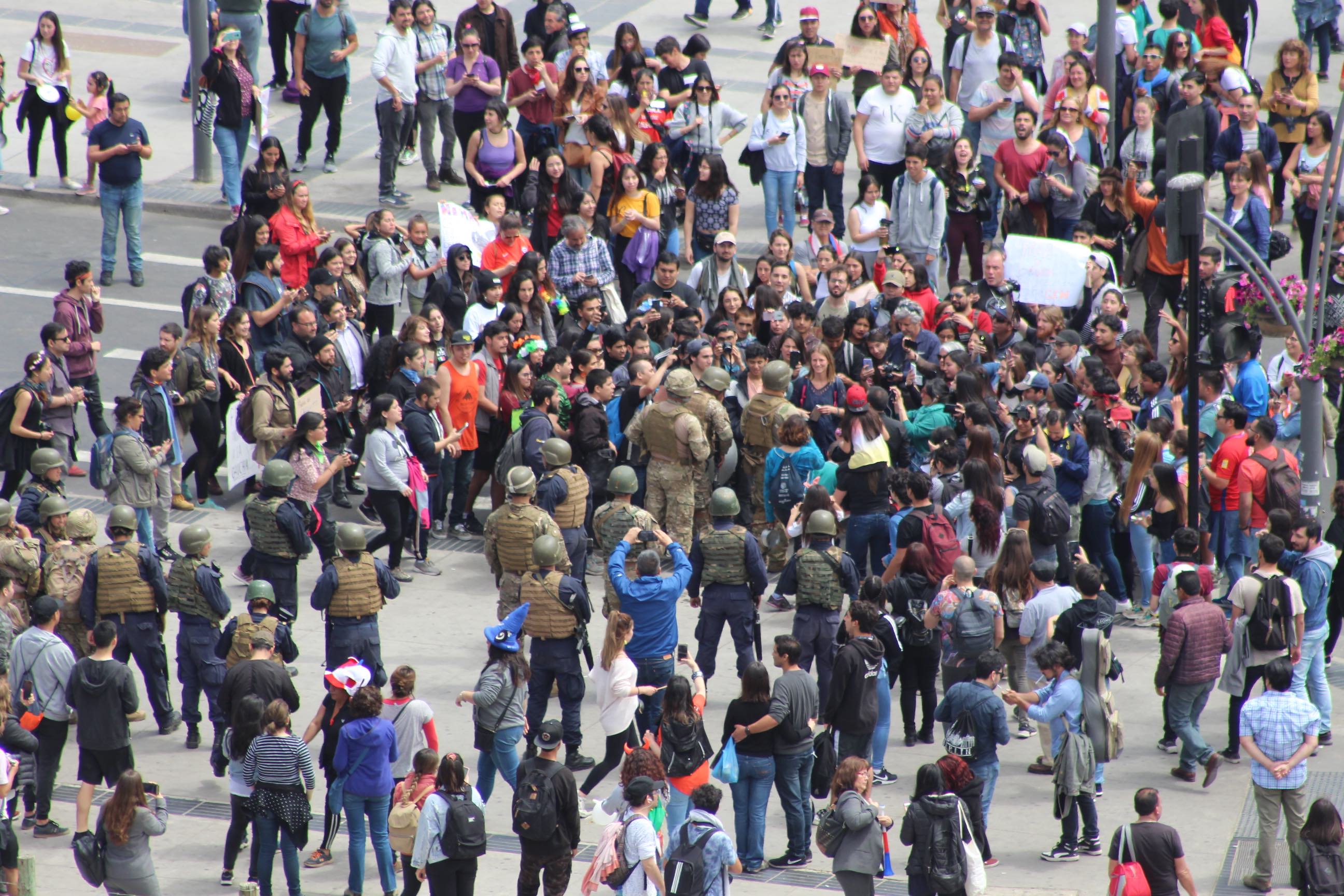 Helicopters circle the larger towns and cities almost 24 hours a day, while fire engines can be heard racing back and forth throughout the affected sectors. Another sound that has remained constant is the beating of pots and pans that hang around the necks and in the hands of protestors while on the street. The echo of kitchen utensils being hit in unified rhythms can be heard late into the night and early morning, giving the protestors only a few hours rest until they return to the streets and plazas the following day.

The inhumane behaviour of the armed forces has been one of the most controversial sources of media attention and riot provocation. While many incidents of detainment and violence against civilians has been the reaction to aggressive protesters and mobs of looters breaking into supermarkets, there have been a significant number of photos, recorded videos and first-hand accounts that indicate a gross abuse of power against undeserving citizens.

So what is really driving this uproar? A transportation-fare increase of $30 pesos may not seem like much unless you know about Chile’s current economic situation. As well as transport, there has been a rise in petrol prices, education fees, and the general cost of living. Pension rates are low, leaving much of the elderly in a state of poverty, with the minimum wage coming in at a paltry $300,000 CLP (USD $422.). The healthcare system has been failing due to a lack of government supplies and funding, while the country’s water system, which is privately owned, is also in crisis.

So although the proposed metro fare increase may not seem like a staggering amount – a mere $30 pesos (USD $.05 ) extra – those receiving minimum wage would pay roughly a sixth of their monthly salary on daily metro commutes. This would have added another deadly obstacle to the already challenging day-to-day existence and survival of many Chileans who are suffering because of the governments’ questionable moral structure. The proposed rise in metro fare was therefore just the tip of the iceberg. 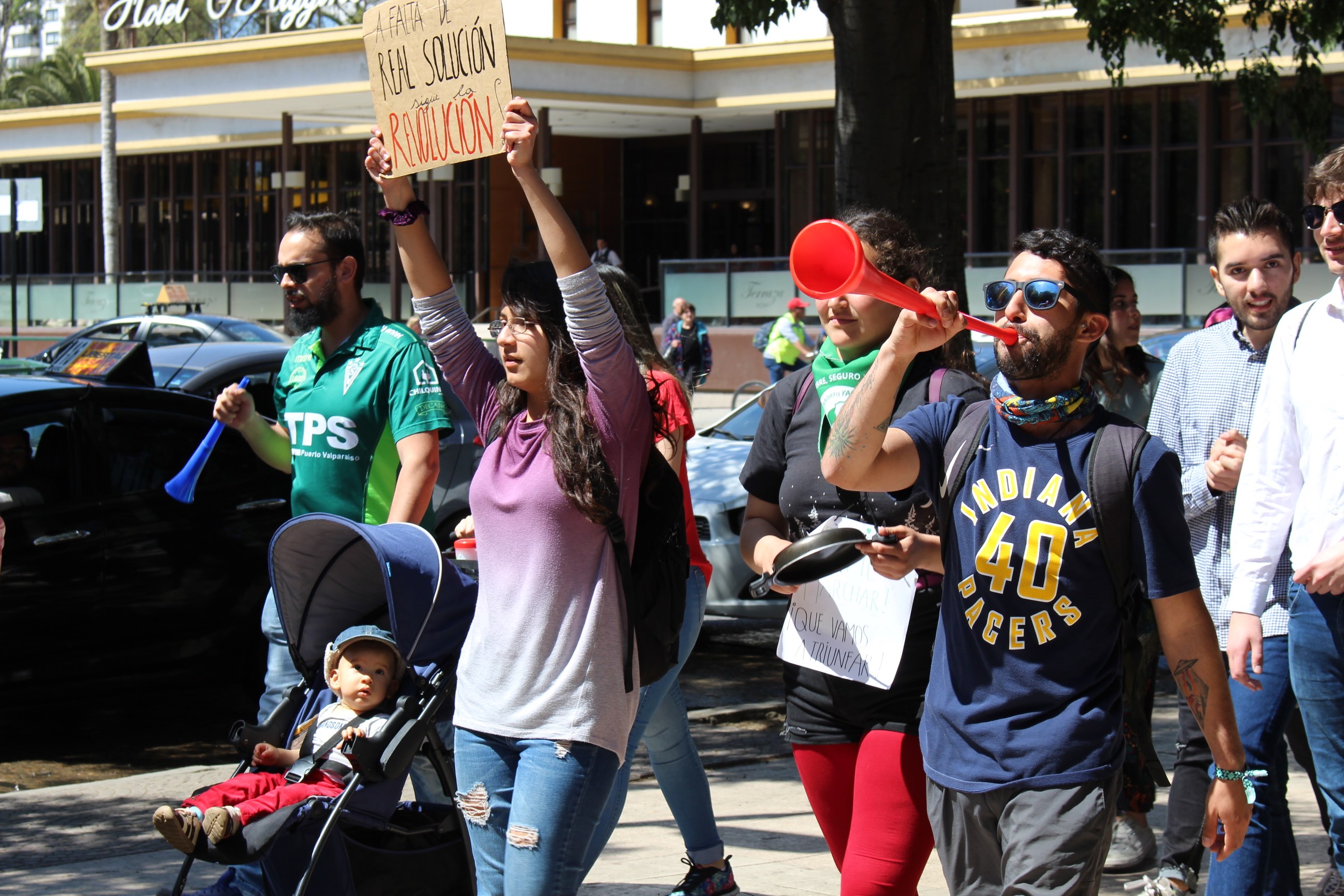 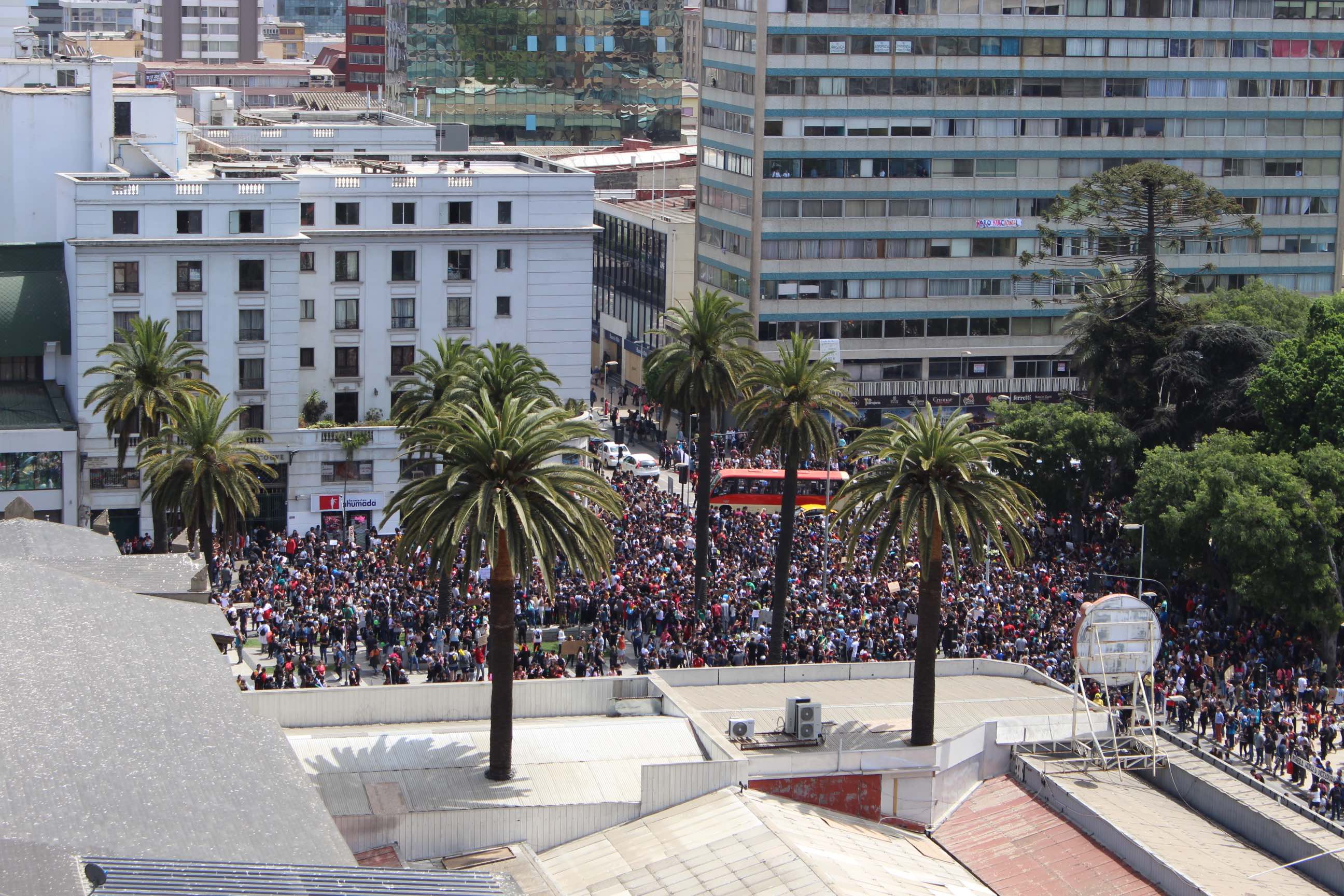 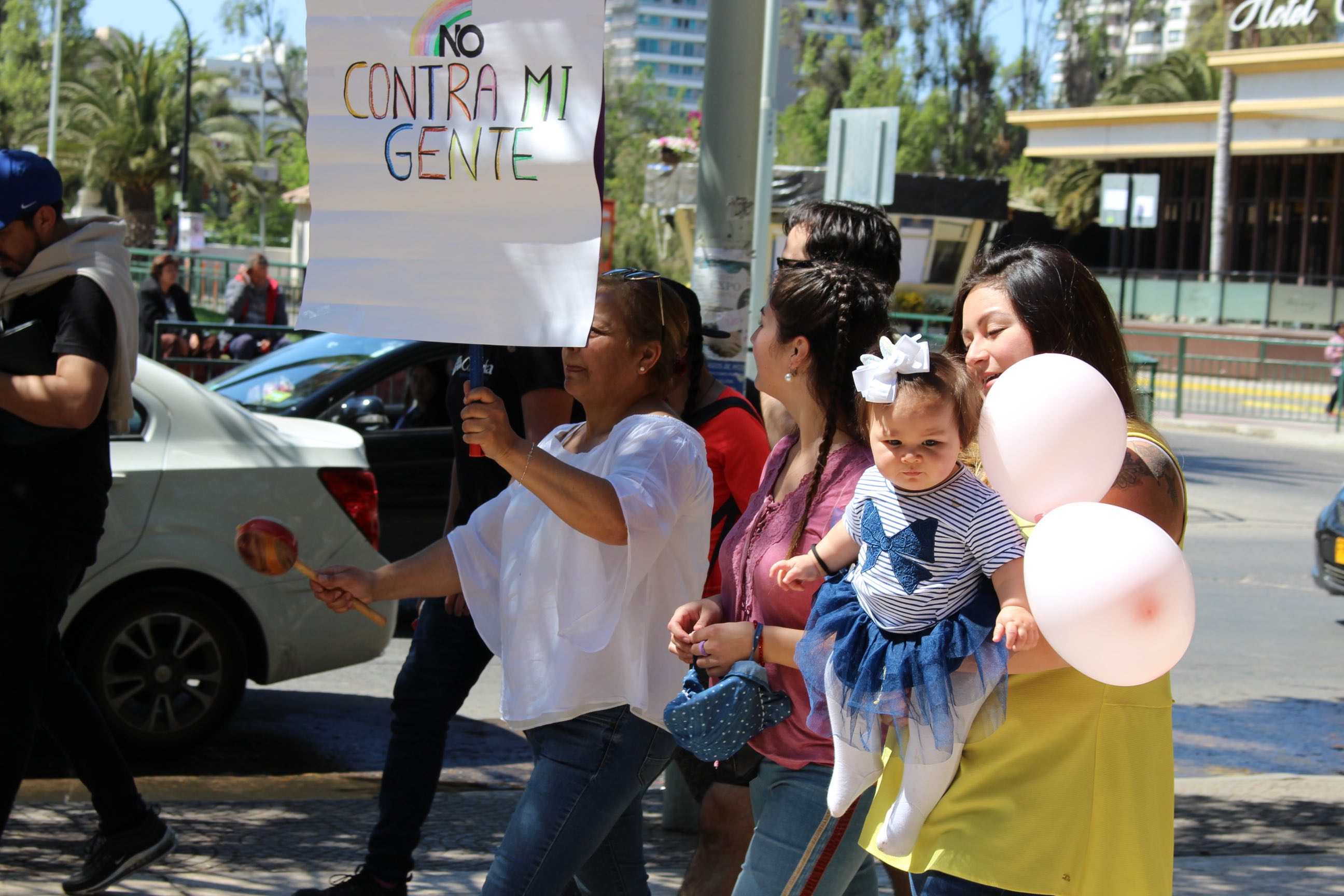 Linkedin
RELATED ARTICLES
OTHER ARTICLES
The past five years have seen a staggering increase in foodbank usage across the UK. Now, staff fear things are set to get much worse.
The author discusses the all-consuming nature of heartbreak, and turning the experience into an incisive exploration of love and loss.
With inflation now at a 40-year-high of 9 per cent, demonstrations organised by TUC took place to demand action from the government.
Proposals to introduce a minimum GCSE threshold for student loans will disproportionately affect those from marginalised backgrounds.
Over a dozen Stop Deportation activists locked themselves to each other outside a detention centre to prevent coaches taking those due to be on the Rwanda deportation flight from leaving.
Freddie Miller’s new series of photographs investigates who today’s trainspotters are and what drives their unfettered enthusiasm.