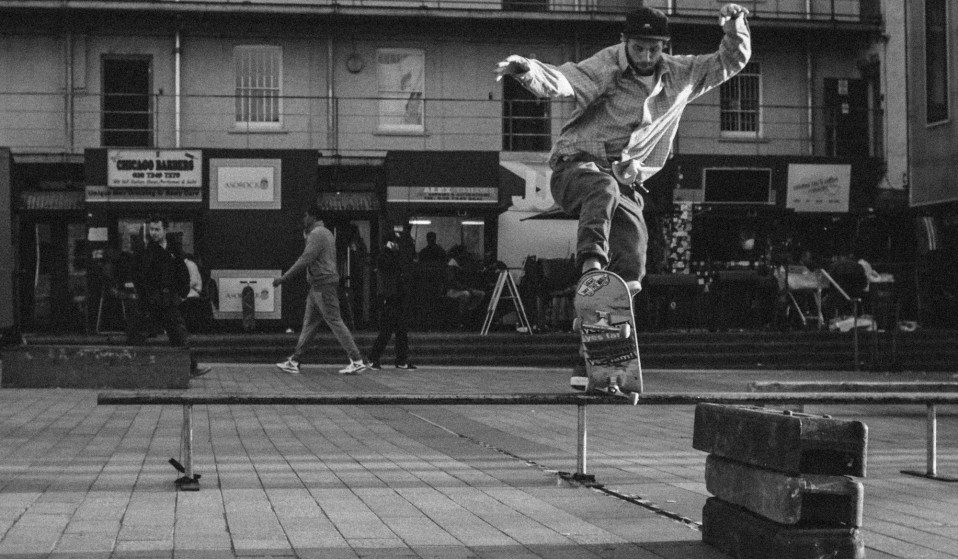 As well as being London's largest DIY skate spot, Gillett Square is also a sanctuary for people living on the fringes of society. But with plans to redevelop the area currently in the pipeline, these communities face an uprooting.

As well as being London's largest and most proactive DIY skate spot, Gillett Square is also a sanctuary for people living on the fringes of society. But with plans to redevelop the area currently in the pipeline, these communities face an uprooting.

Until 2006, what is now Gillett square was a car park in the centre of Dalston. Just over a decade later, it’s one of London’s most celebrated public spaces. Over those 11 years, the square’s inhabitants have become a loving, dysfunctional family. Without meaning to, they’ve created an exemplar of what civic life can be. Now though, the chemistry that makes the square what it is may be threatened by development. Plans that eat into its open space are in the offing, but those that built their community from scratch are fighting back.

“It’s like Coronation Street here,” says Moses. He’s been playing dominos on the site since it was a car park. “The only difference is, it’s unscripted.” Discussing the possibility of development, he tells me, “When they see something good, they just want to drop a stink bomb in it.”

Moses and many others were playing dominoes here long before the car park was transformed into what it is today. In those days, the only company they had was a police station that kept an eye on them from the other side of the lot. When the square was built around them, they stayed, and have been there ever since. 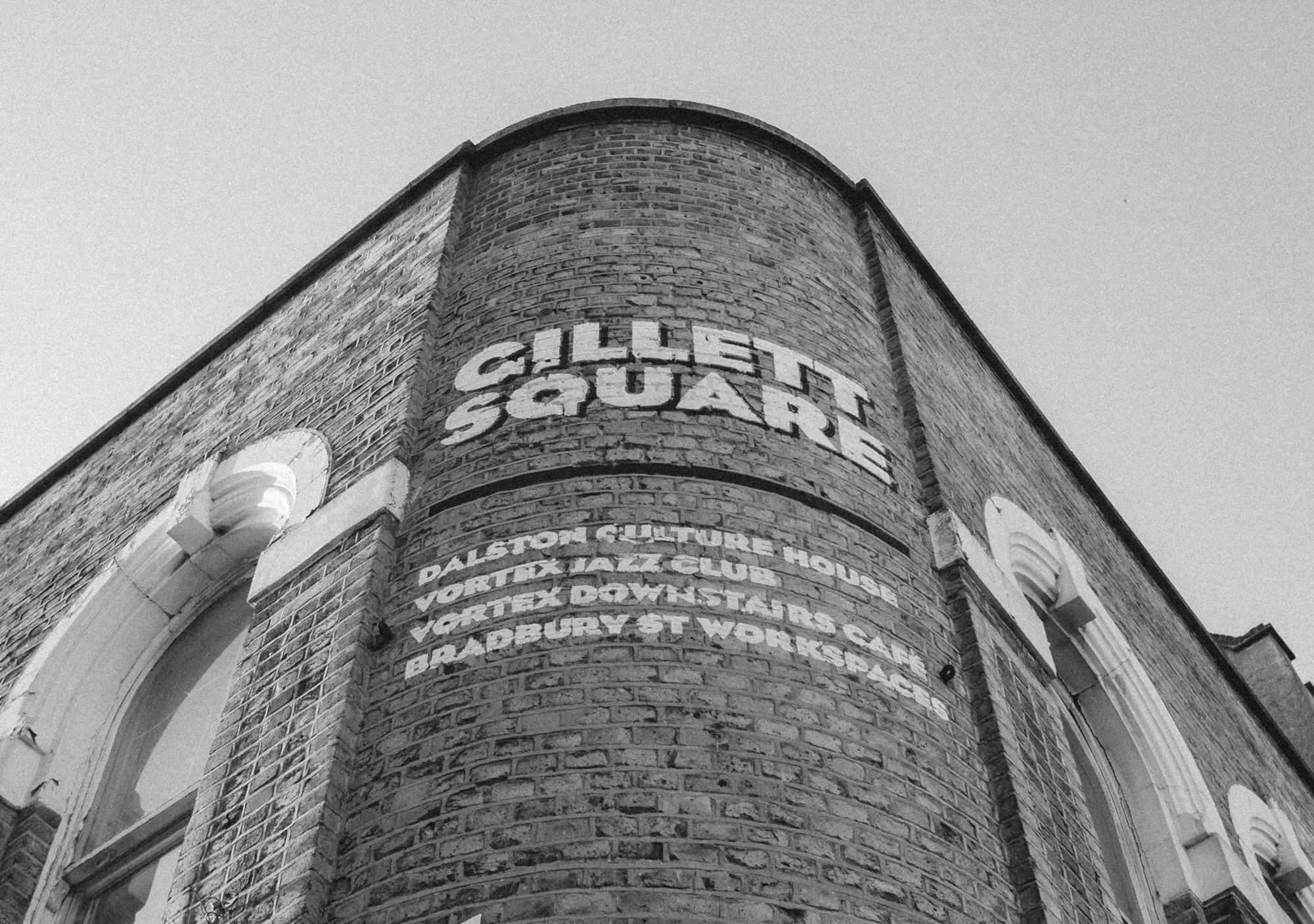 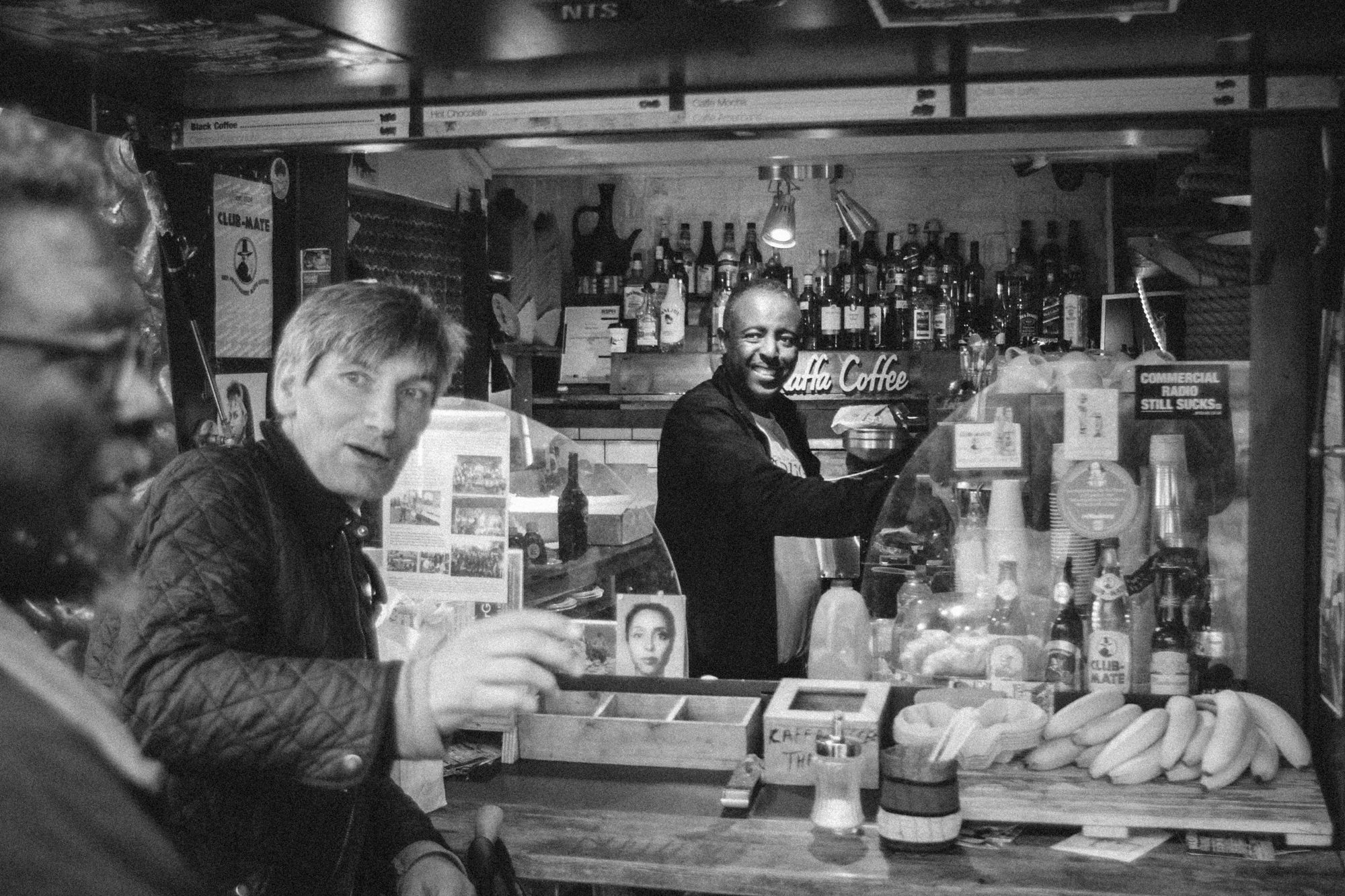 Life on the nascent square was tense. The area was notorious, and footfall was light. Other than the domino players and a handful of businesses, Dalston’s skateboarders were among the earliest adopters. Markos, the owner of the now famous Kaffa Coffee, set up shop in 2008 after a cafe he ran in Camden burnt to the ground overnight. When I ask about the early days, he tells me, “I started selling coffee, roasting coffee to attract people, and playing Ethiopian jazz, there were not many people at that time. Slowly the first skater appeared, I remember it was Pat. He got attacked so many times. People were setting dogs on him. It was a new culture on the square, so I protected him. I had a word with the people he was arguing with. I said come, we have to help each other.”

Skaters are often accused of acting as the ‘shock troops’ of gentrification, sanitising spaces used by the homeless, and readying them for development. At Gillett Square, this dynamic is stark but complex. “There’s a guy here tonight who tried to stab me, he doesn’t remember now, but he opened his coat, and had a knife, and he just went for me,” Pat recounts. “I had my board, and went bang, but they (the other drinkers) banged that guy down for me as well. Everyone stood up, it was a big moment.”

Moses remembers that era too, and his run-ins with Pat. “We had some beef with the skaters because they were running into people. I know Pat. We had some beef, but he’s a good man. We’ve all got to live together now.” Harmonious cohabitation still doesn’t happen 100 per cent of the time, but with those early days of push and pull (sort of) behind them, the square’s inhabitants have a bigger beef. 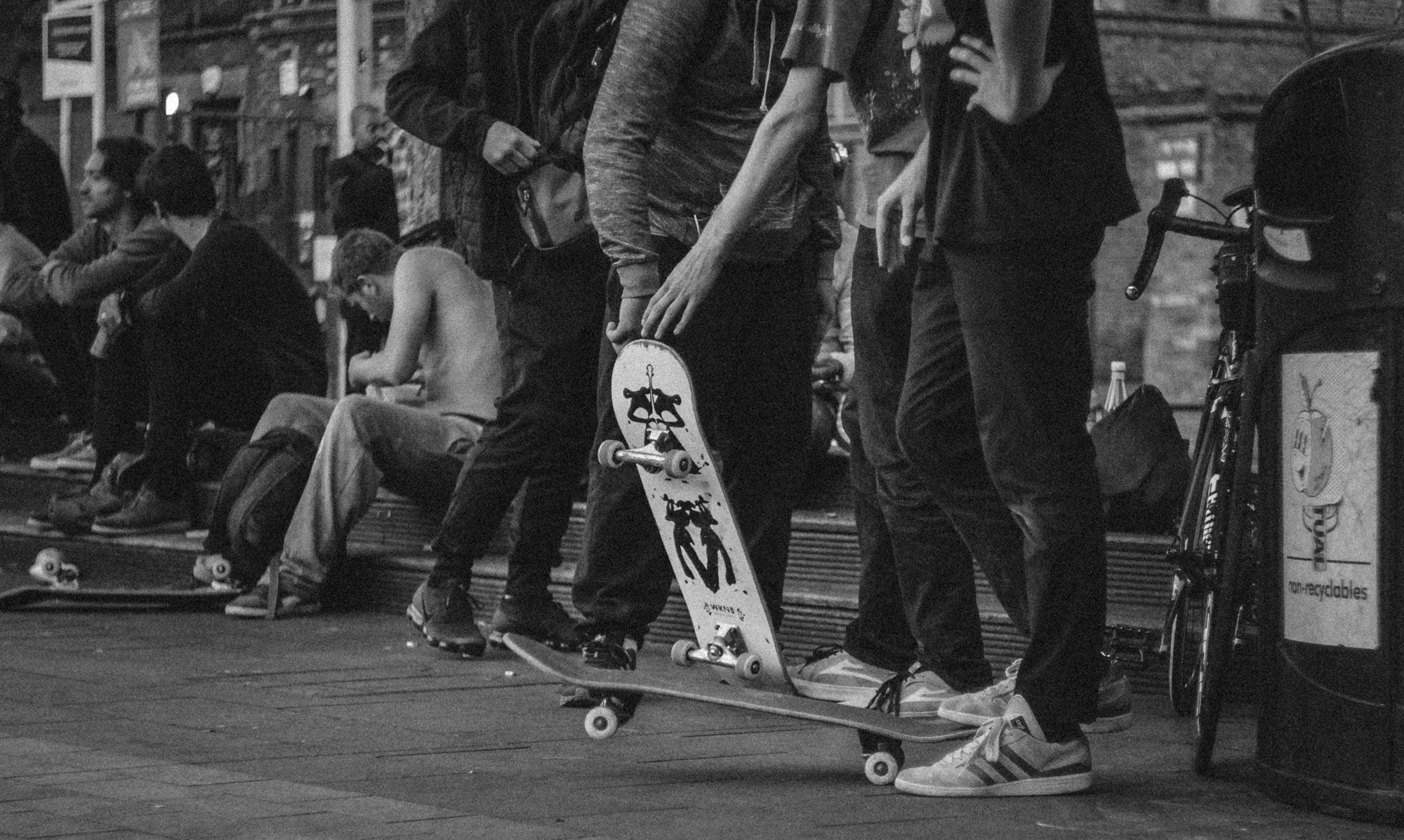 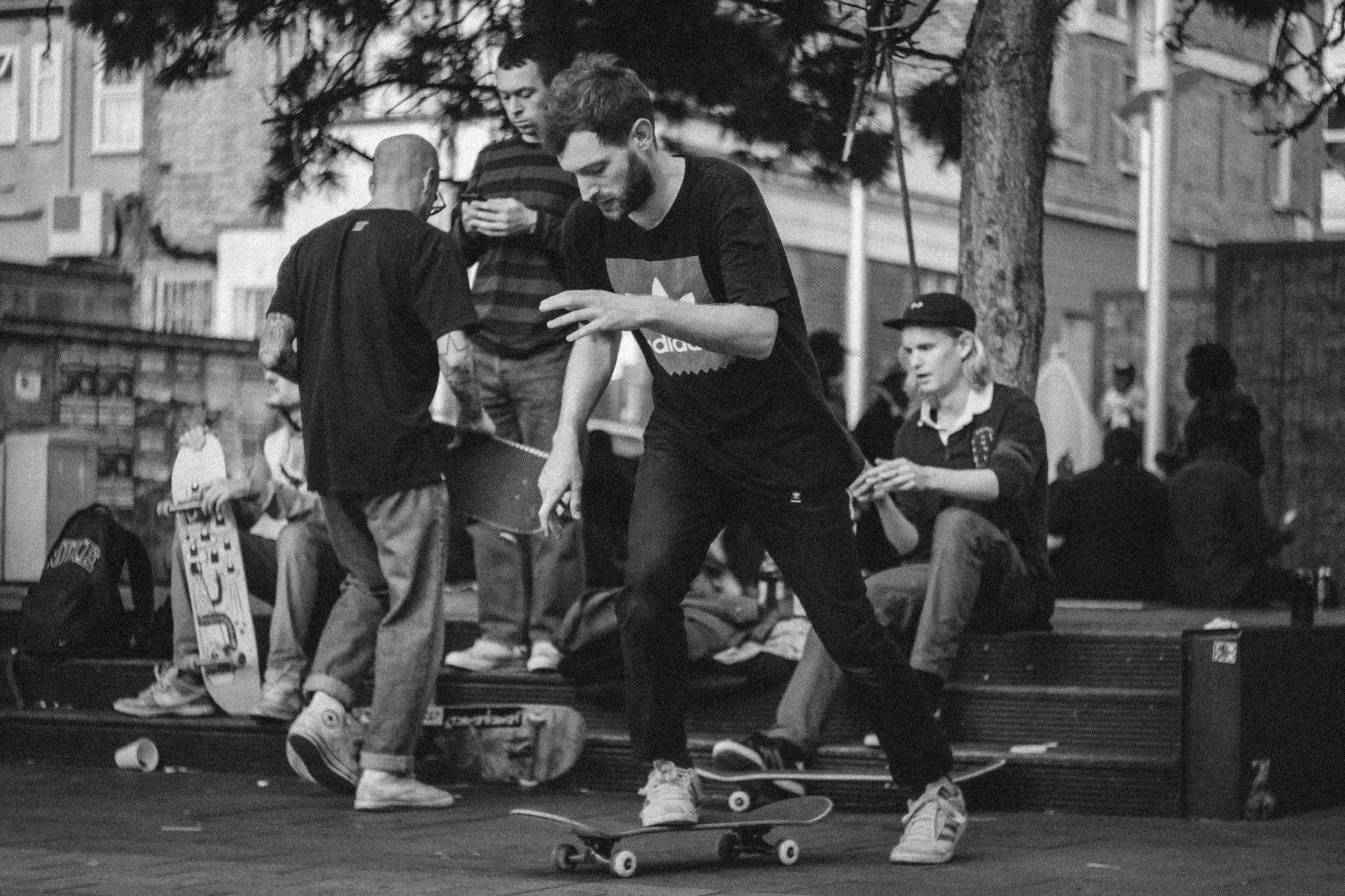 In 1999, the south edge of the site was lined with ‘pods’ – low rise, one room buildings – big enough for a small business to operate from. Today, they house businesses from Ethiopia, Biafra, Somalia, Jamaica and elsewhere, as well as the NTS radio studio, broadcasting seven days a week. Together, they make up the fabric of the square, offering not just, tea, coffee, haircuts and chicken, but providing much-needed spaces for people to meet and organise their own communities.

Hackney Co-operative Developments (HCD), the company that owns the pods, as well as a large, three-storey building behind them, have announced plans to extend the building into the square, to where the pods currently sit. Where the businesses housed by the pods will go if plans are approved is not yet clear, but the absence of any equivalent location doesn’t bode well. The fear of an unsatisfactory decision, and the resentment it would cause, is palatable. “We’re building our community, our thing. Why are they going to take this life from us? Sometimes I feel like i’m going to cry,” Markos tells me, describing the possibility of the community of businesses he has helped create being broken up.

HCD is not a huge, evil, or opaque company. It’s CEO and his employees have made clear they intend to do what they can to preserve the community. But the fact that the pods will have to move from their prime spot looking out onto the centre of the square, replaced by what is currently planned to be a three storey, glass fronted building, gives pause. Adam Hart, a former CEO of HCD currently campaigning against the changes, tells me, “the pods would have a completely different relationship with the space, they would be outside the space. They play a very important role, alive and open to the whole situation.” The problem facing the community is that there are currently zero satisfactory options for relocation. What’s worrying, is that the developers are intent on pushing ahead regardless. 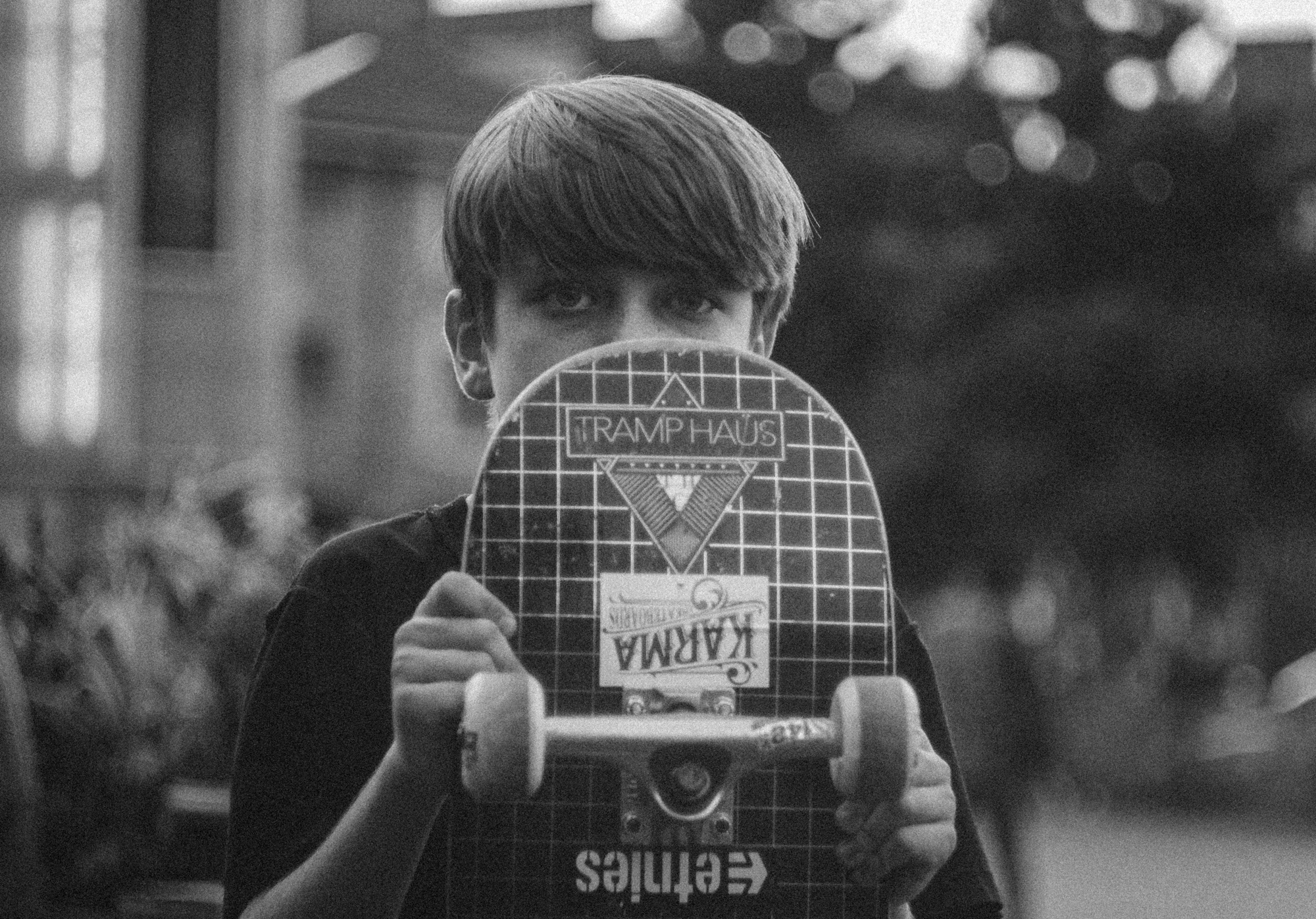 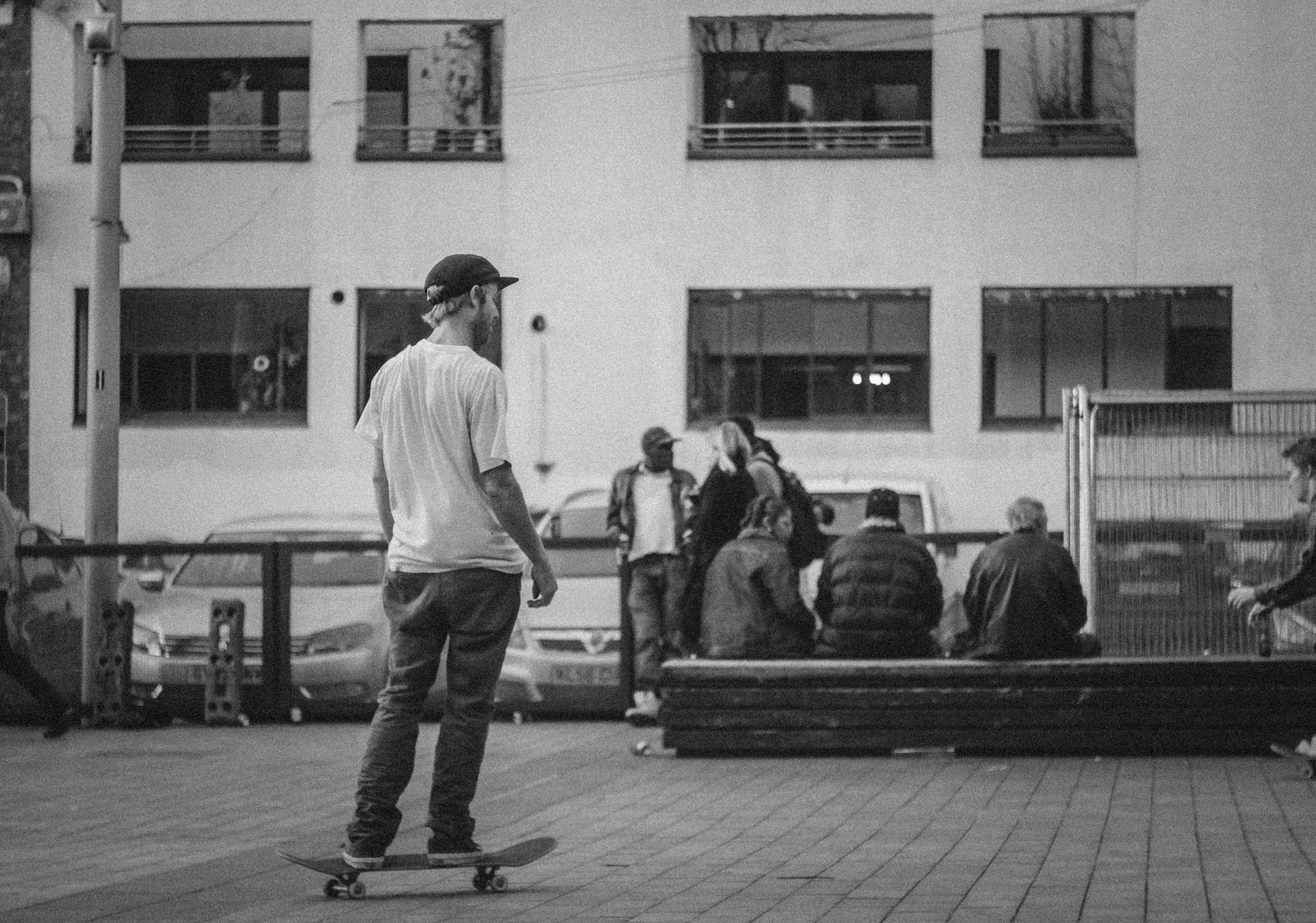 Again, HCD have made assurances that they will do what they can to preserve community cohesion. But in a city like London, pressure to turn space that you don’t pay to use, into space that you do, is huge. The square’s inhabitants know that, and although developers are saying what they’re expected to, fear remains, and with London’s record, it is more than justified.

The academy of urbanism describes Gillett Square as “a physical testament to what can be done if the special ingredients are found, and the right formula applied.” The alchemy that makes the square is hard won, and robust, but it is also fragile. City wide, residents know that when developers begin to circle, their days are numbered. A separate development deal, so close to completion that it was prematurely announced on the developer’s website, was recently quashed by Hackney council. Sadly though, once the first attempt on what could be prime real estate is made by developers, they tend not to give up. As we sit outside Kaffa Coffee, Markos sighs. “Everything is going to change, we are powerless. How we’ll stop it, I don’t know.”

Linkedin
RELATED ARTICLES
OTHER ARTICLES
Theo McInnes’s photos of the annual event provide an intriguing snapshot of contemporary Britain.
At his West Bank restaurant, Fadi Kattan established himself as the voice of modern Palestinian cuisine. Now, he’s bringing his innovative, bold flavours to the UK’s capital.
A recent High Court ruling against the right to wild camp in Dartmoor National Park sparked the largest land protest in history – and campaigners say their fight is not over yet.
AI companies that develop image-generators using copyrighted artwork from the internet are coming under fire from artists who say that it amounts to theft.
As she gears up for the release of her first book, the 24-year-old climate activist talks standing up to authority and building a more inclusive movement.
Filmmaker Laura Poitras discusses her new documentary which traces the remarkable life of the artist-activist and the impact of her battle against the US opioid crisis.