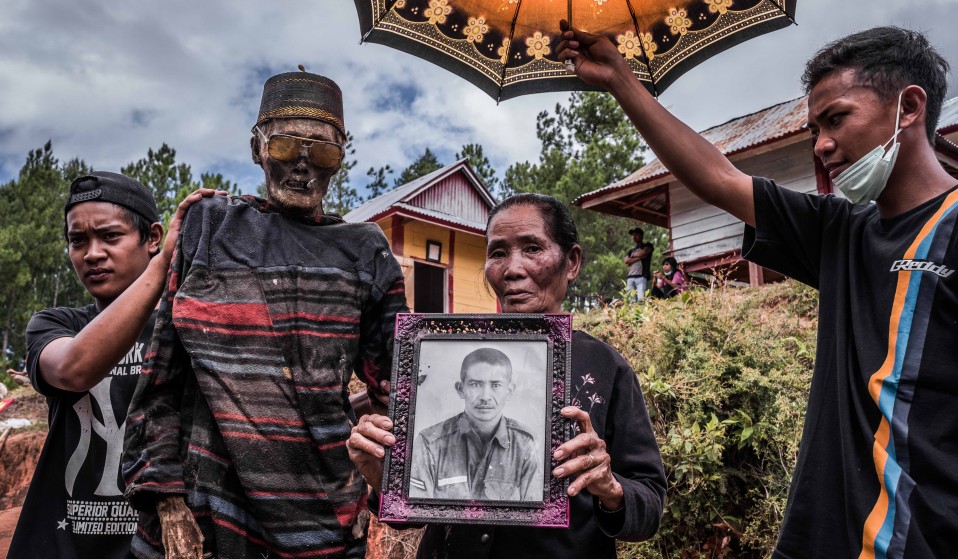 Photographer Claudio Sieber heads to Indonesia to capture ‘Ma’Nene’ – a soothing, spiritual which sees cadavers get re-clothed, polished, and given a sunbathe.

Photographer Claudio Sieber heads to Indonesia to capture ‘Ma’Nene’ – a soothing, spiritual ritual which sees cadavers get re-clothed, polished, and given a sunbathe.

In South Sulawesi, Indonesia, the Torajan people “live to die.” Mummified corpses, preserved with Formalin, are kept in the family home for years or even decades after death. Until a funeral – a multi-day event that can cost hundreds of thousands of dollars with dozens of buffalo and hundreds of pigs being slaughtered – can be arranged, the lifeless are not dead. They are simply “To makula” – sick people.

For Torajans, the line between this life and the next is infinite and porous. After a funeral, when the dead have been helped along the way to “puya” (the afterlife), their corpses are interred in a cave. But every year, in August, there is Ma’Nene ritual, in which the bodies are brought out and re-clothed, their bones polished. Sometimes, the newly-freshened cadavers are even taken for a walk around the village. 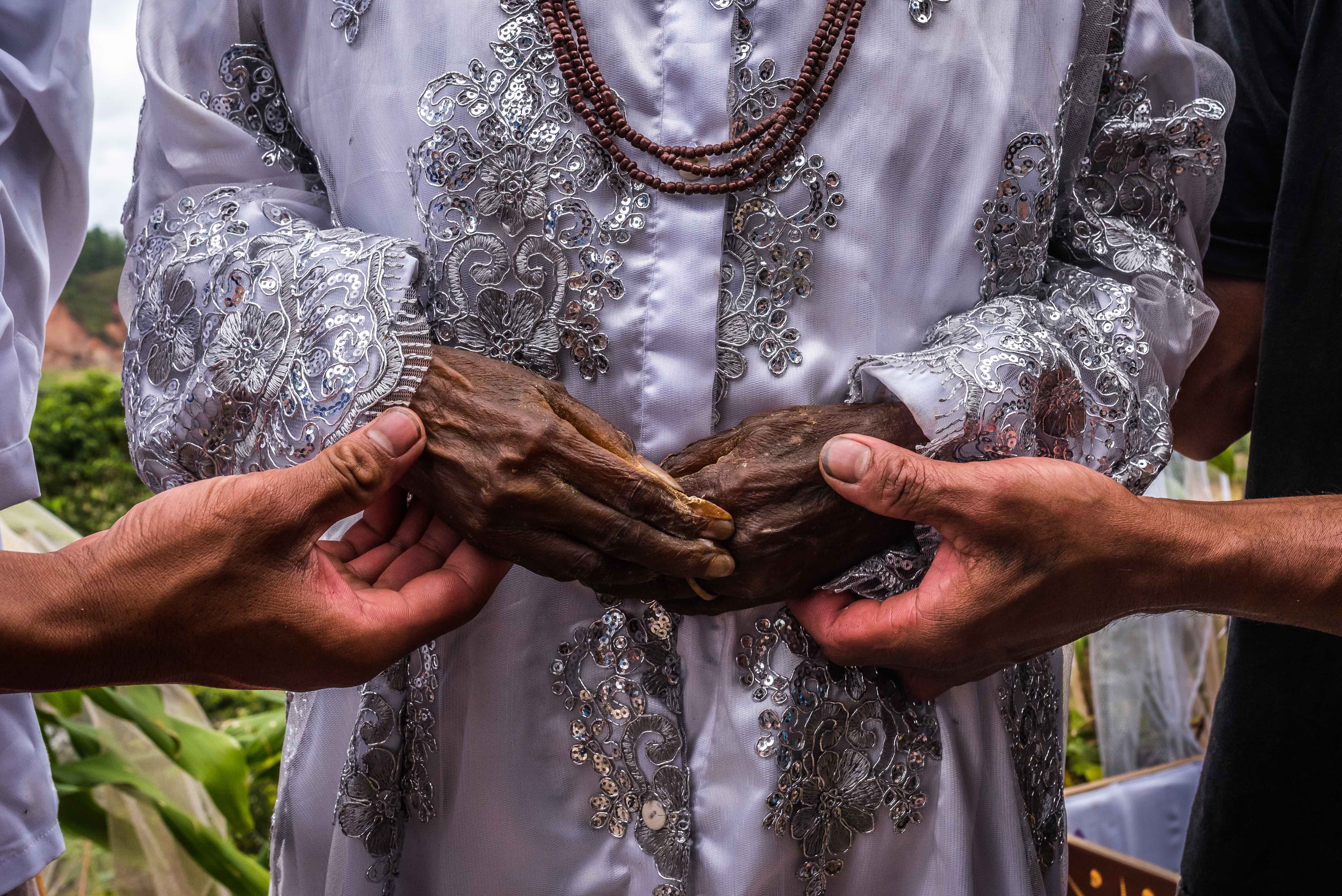 Relatives presenting Martha Rantelimbong, who passed away 2 years ago during the event of Ma’Nene (Care of Ancestors).

Swiss photographer Claudio Sieber’s photographs of Ma’Nene and Torajan funerals, taken this August during a three-week, three-funeral journey around Tana Toraja (“Land of the Toraja”), ought to make us flinch. There’s a mummified man in a crisp suit with a lit cigarette locked between the teeth of his permanent grin; three generations of a family smiling warmly for a portrait, propping up their long-dead patriarch, who wears black sunglasses; a girl no older than seven posing with the doll-like corpse of her infant sister, who died six years ago. But Sieber’s images aren’t as harrowing as they are uncanny. After scrolling through them for long enough, between the sheer weight of bodies and the relaxed atmosphere that surrounds Ma’Nene, the pictures end up with a strange sense of calm.

Sieber got used to it himself pretty quickly, too. “I became very comfortable with the situation after maybe two or three days,” he tells me over the phone from a cafe in Bali. “I changed my perspective about it because for them it’s life that goes beyond death. It’s not a sad moment.” 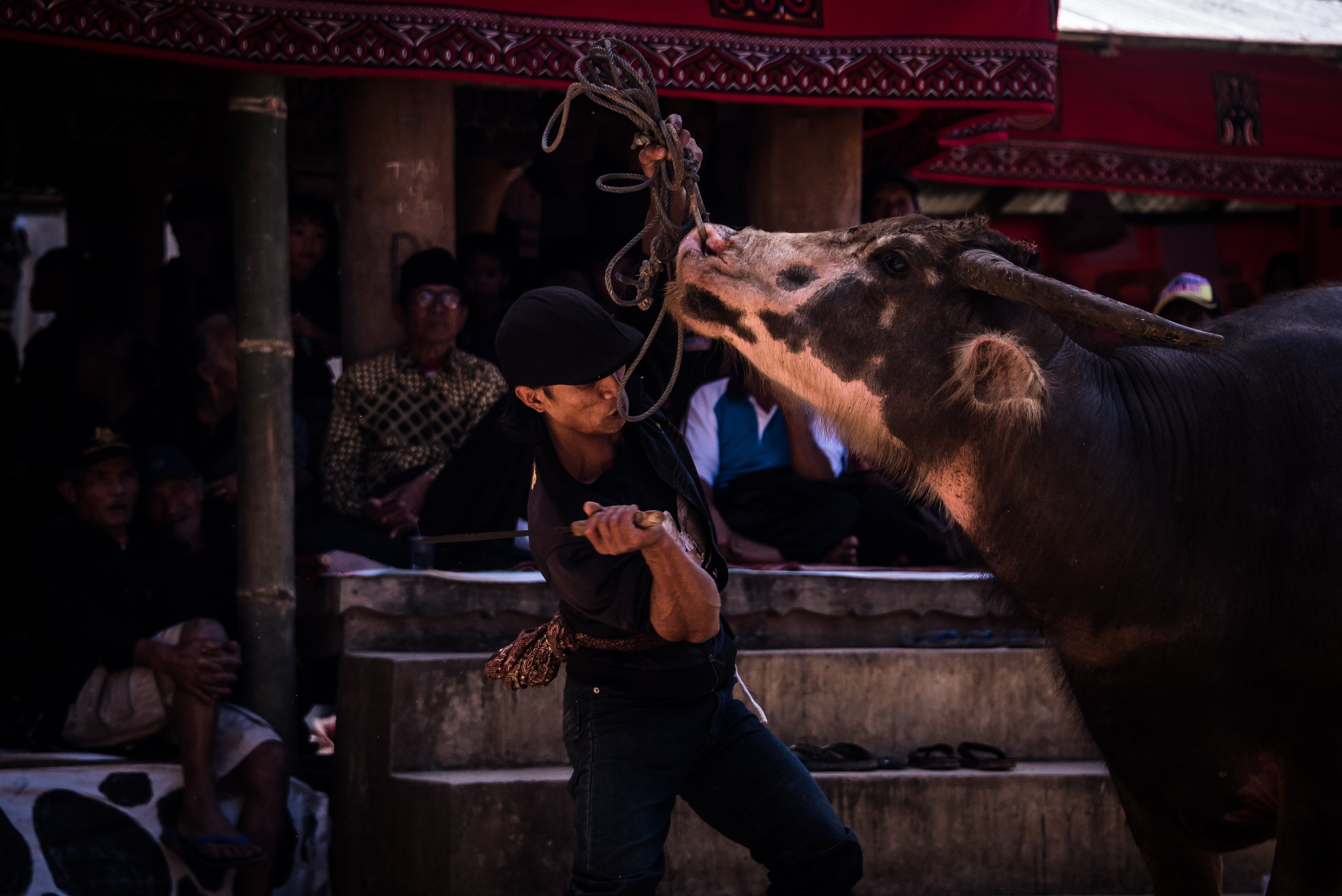 Almost half of Indonesia’s 1.1 million Torajans live in the highlands of Sulawesi, and the vast majority of the population have converted to Christianity over the past century, since Dutch missionaries first arrived. But that Christianity often remains entwined with “Aluk To Dolo,” the Way of the Ancestors. It’s an animistic belief system that, for most of its history, has touched every aspect of Torajan life between death rituals and life rituals. Those Dutch missionaries deemed the life rituals to be improper, and banned them from Toraja life. But the death rites, at least in villages like Lo’Ko Uru, live on.

Ever since National Geographic ran their first story on the Torajan people in 1972, Westerners have inevitably taken an interest in the region. Tourism began to boom in the 1970s and ‘80s and, though the industry has had dramatic spikes and troughs since, Tana Toraja is still thought of as the second-most popular destination in the country after Bali. 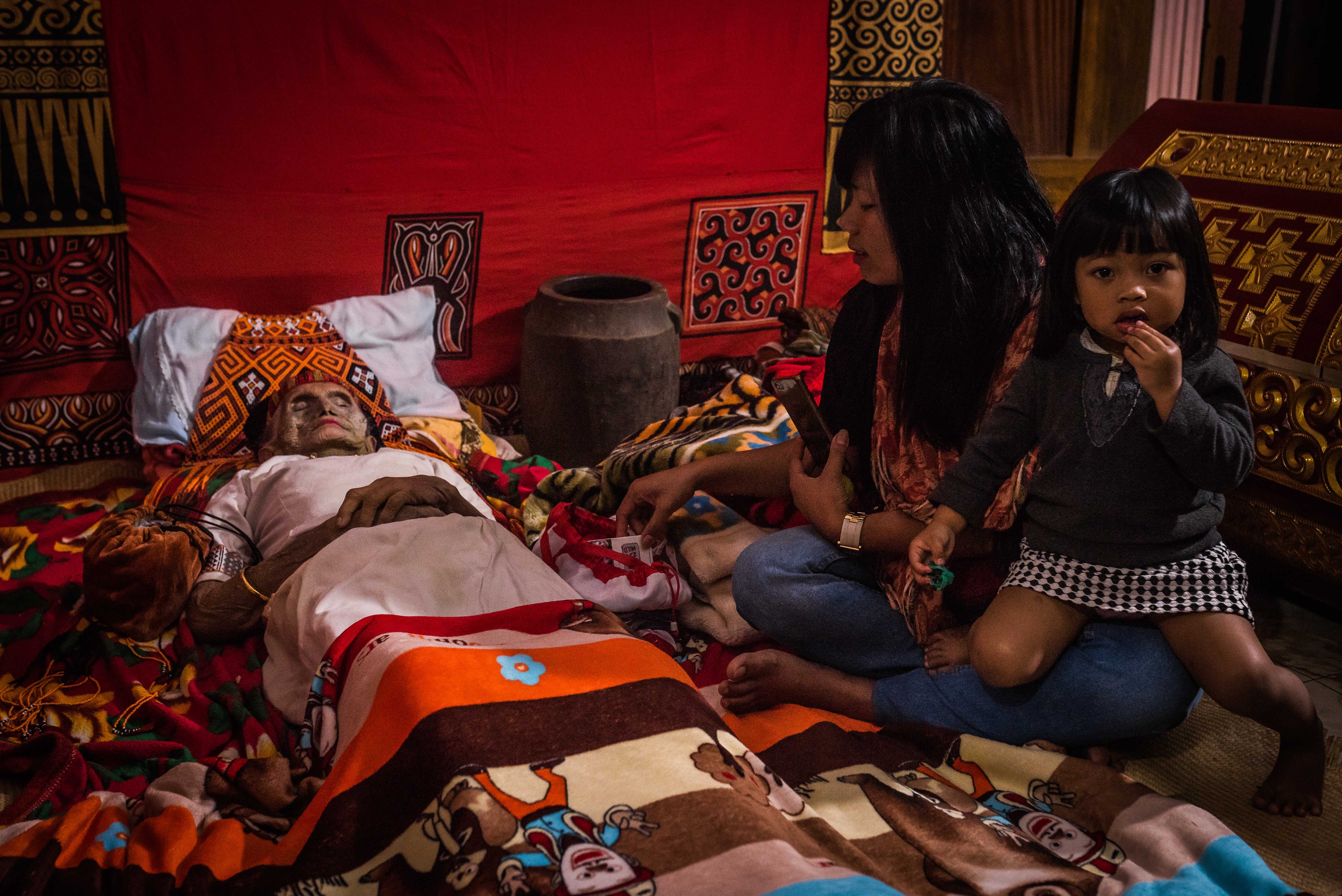 Relatives visit Nene’ Tiku who passed away 3 days ago in the age of 106.

The Torajan attitude to death is the perfect negation of our swift, out-of-sight grief. Everyone – from anthropologists to selfie-wielding students – is likely to be intrigued. “They’re very intimate, the small Ma’Nene rituals,” Sieber says. “There’s not really a lot of tourists. Maybe some other foreigners, maybe one or two. The funerals, the big funerals, that’s something different. I heard about one funeral that just happened, like, two weeks before I got there. They had more tourists than locals.”

As a photographer and an outsider, Sieber did have reservations. “It’s a little bit awkward for an outsider to be there and say, ‘Well, I’m really sorry for your loss, but can I take pictures?’” he says. But that dissipated when he realized how open people were. At one point in his account of the journey, which you can read on his website, Sieber asks a man called Noel, who is hosting a funeral for his grandparents that will be attended by roughly 800 people, if he minds a foreigner joining for the day. “For us Torajans it’s an honour to welcome a foreign guest at the ceremony,” Noel apparently responds, “especially because a Bule – Westerner – contributes well to the prestige of a family.” 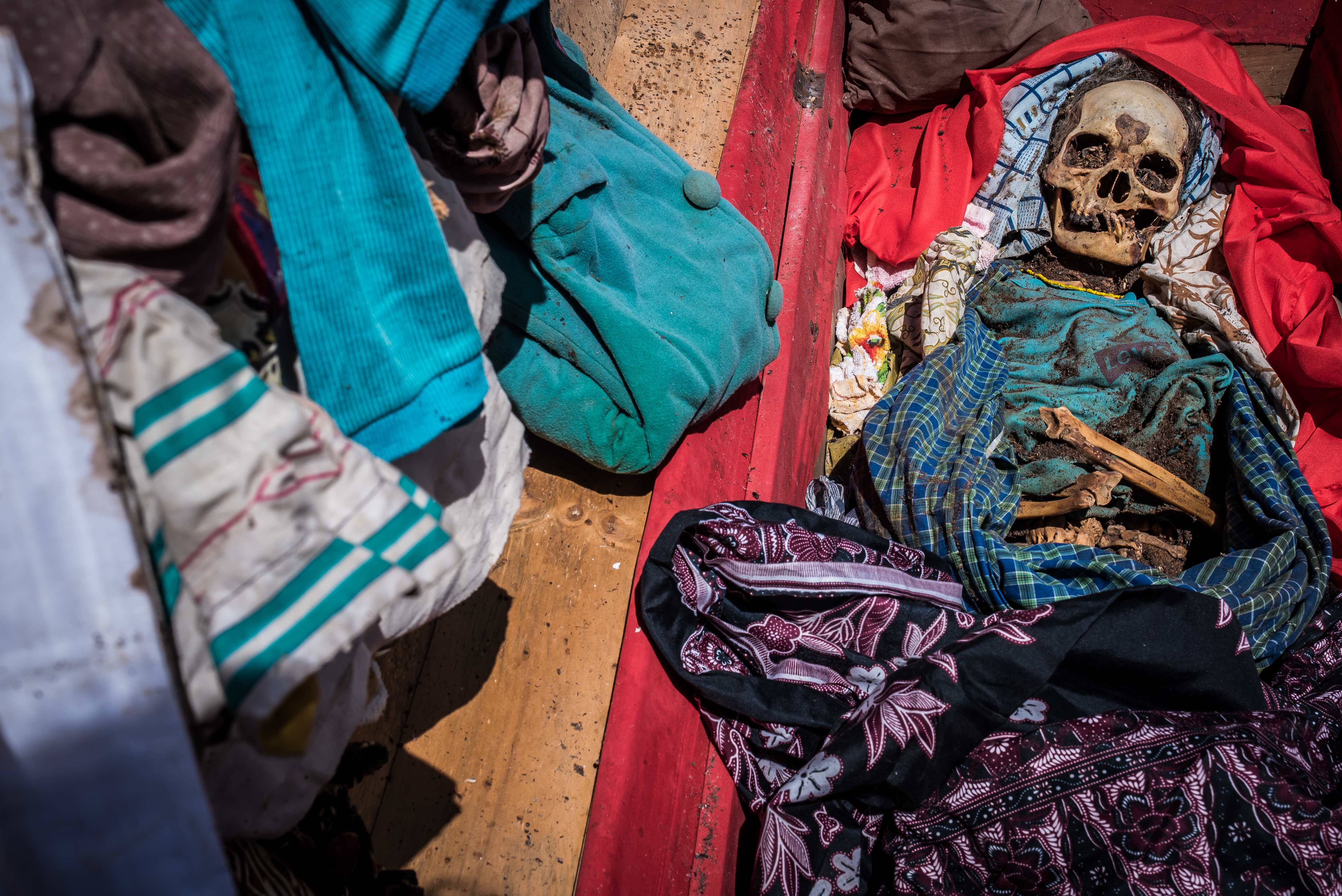 Though Sieber’s photographs do show an attitude towards death that diverges completely from our Western taboos, they’re not devoid of grief. In one photograph, a man holds the dead body of a baby up for the camera. In another, a young man stands over his recently deceased mother and cries. “Of course, I felt like I should go,” Sieber says of that moment. “After a couple of seconds, a couple of tears, he was just feeling completely normal again. [He] just stood up and was like, ‘That’s it. She’s sick, she’s doing fine.’ Then he gave her food.”

The animal slaughter and rice wine of the funerals and the colourful closeness to death of the Ma’Nene ritual are all naturally vivid in Sieber’s photographs. But that in itself can be a problem. Newspapers like the Daily Mail and The Sun have written about the rituals in ways that he thinks are too sensationalised. “It’s not really a festival,” he says. “It’s like an event where people come and gather, all the clan is coming back, they enjoy, they eat better, they enjoy food and stuff, drink rice wine. And yeah, that gives you also as an outsider the feeling that, well, it’s not too bad, life goes on.”

See more of Claudio Sieber’s work on his official website.

Linkedin
RELATED ARTICLES
OTHER ARTICLES
Members of the collective share some of their reasons to run as part of #UnitedBySummits, a campaign that looks to uncover transformative power of the outdoors.
Over the weekend, London locals came together to resist a pre-planned police raid targeting delivery drivers.
In the last of our dispatches from OFFF Barcelona, Rufus Deuchler and Vincent Gault discuss the future of creative process.
From the Yakuza to a biker gang, Bruce Gilden recounts capturing Tokyo and Osaka in the ‘90s.
A group of Ukrainians living in Poland are helping Ukraine withstand Russia’s brutal invasion by buying supplies and shipping them directly to the war’s frontlines.
Photographer Phyllis Christopher recalls capturing sex and protest at a time when the city had become a haven for the queer community.