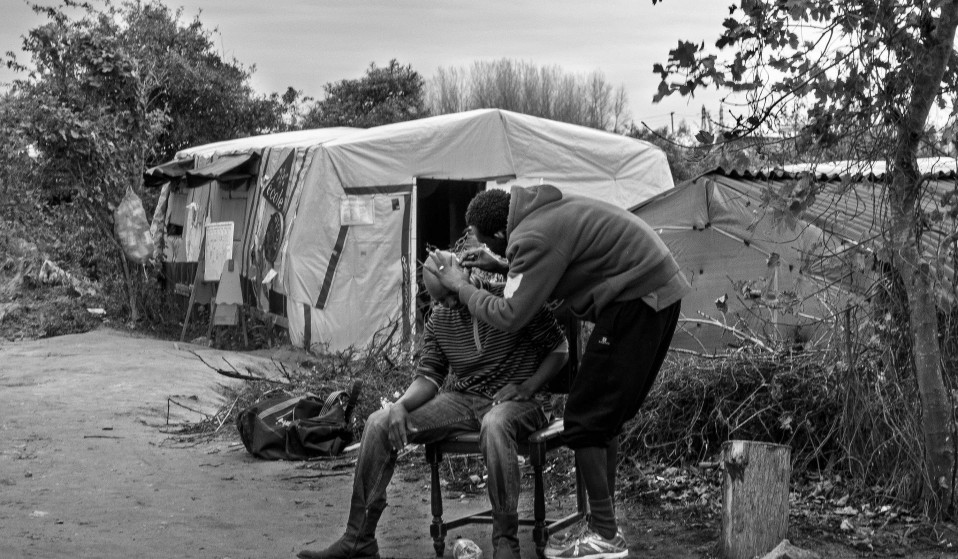 An intimate snapshot of the Zaghawa people

A snapshot of the Zaghawa people living in purgatory at the Calais “Jungle”, hoping they will soon find refuge.

Of the relationships I built with volunteers and refugees during my visits to the Jungle, it’s my time with the Zaghawa people sticks out.

The Zaghawa are a transnational ethnic group living mostly astride the border of Chad and Sudan, working the land for their livelihood for generations. In the 12th century their belief system was Animist, but they later converted to Islam, retaining strong links to their African heritage and identity. 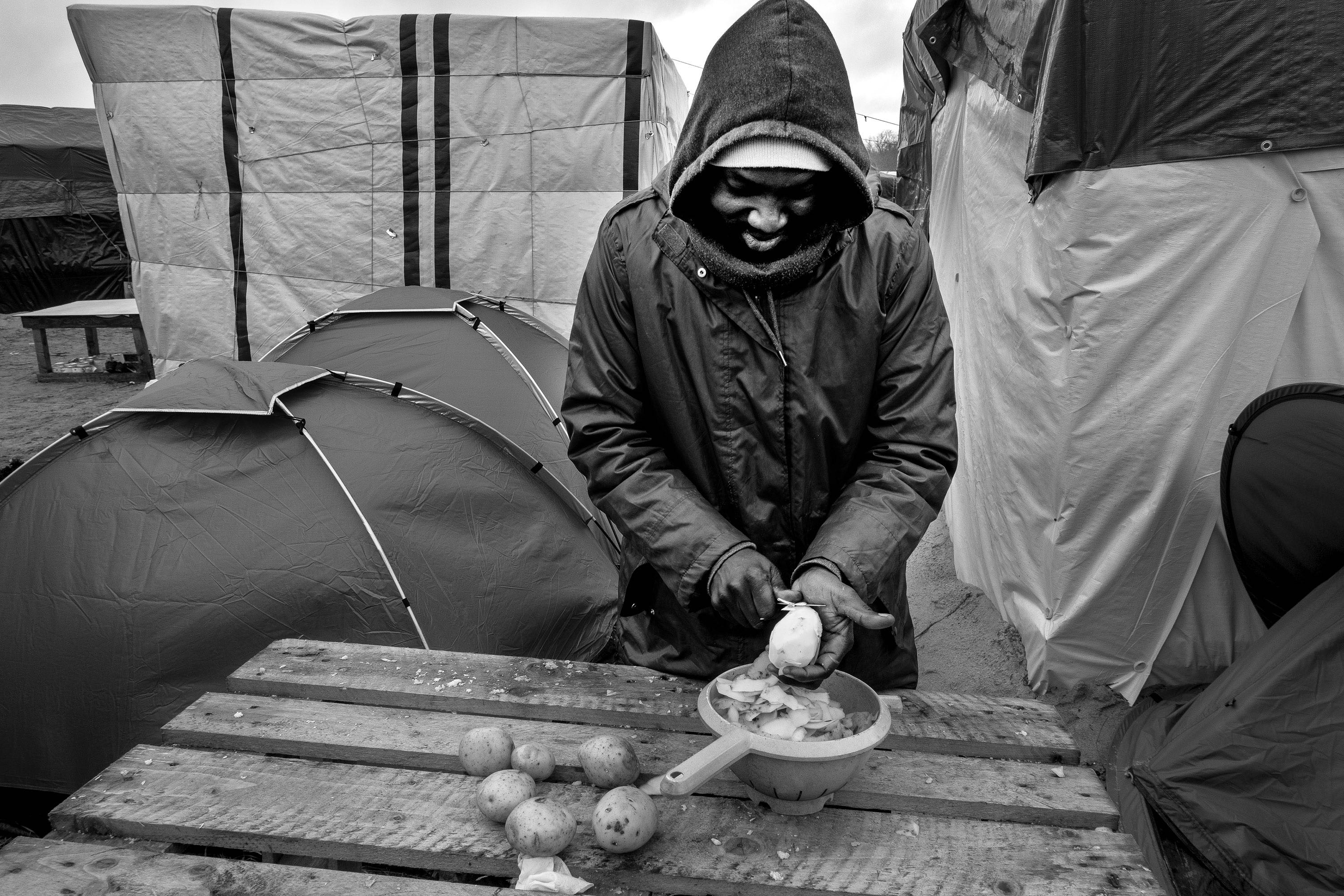 In Sudan the Zaghawa can be found in Darfur, one of the tribes most persecuted in the on-going conflict that began to ravage the region back in February 2003; the repression of Darfur’s non-Arab population has caused the majority of the bloodhsed. The Zaghawa have been heavily persecuted by the Sudanese government – using the violence and torture of the Sudanese Army and through local Janjaweed militias.

This conflict has forced hundreds thousands Zaghawa to flee to refugee camps located in Chad and the Central African Republic, but others have headed in the direction of Europe. Many made the long and arduous journey to Europe through Libya to Italy, by crossing the Mediterranean Sea. Their destination was England – as a former British colony many Sudanese refugees speak English, have relatives here, and retain strong emotional ties to the country.

One day, as I was walking inside the Sudanese area of the Jungle, I crossed paths with some refugees who I’d met on a previous trip. One of them, Mohamed, greeted me kindly, and invited me to join him for a coffee. We talked for hours, about life in Sudan, his journey to Europe, and living conditions in the Jungle. We agreed to meet again the next day, and I soon got to know his community. Some of those I met were electronic engineers, teachers or historians. Many held jobs as aid workers and strategists for the UNHCR, others have completed Masters degrees at the University of Khartoum. 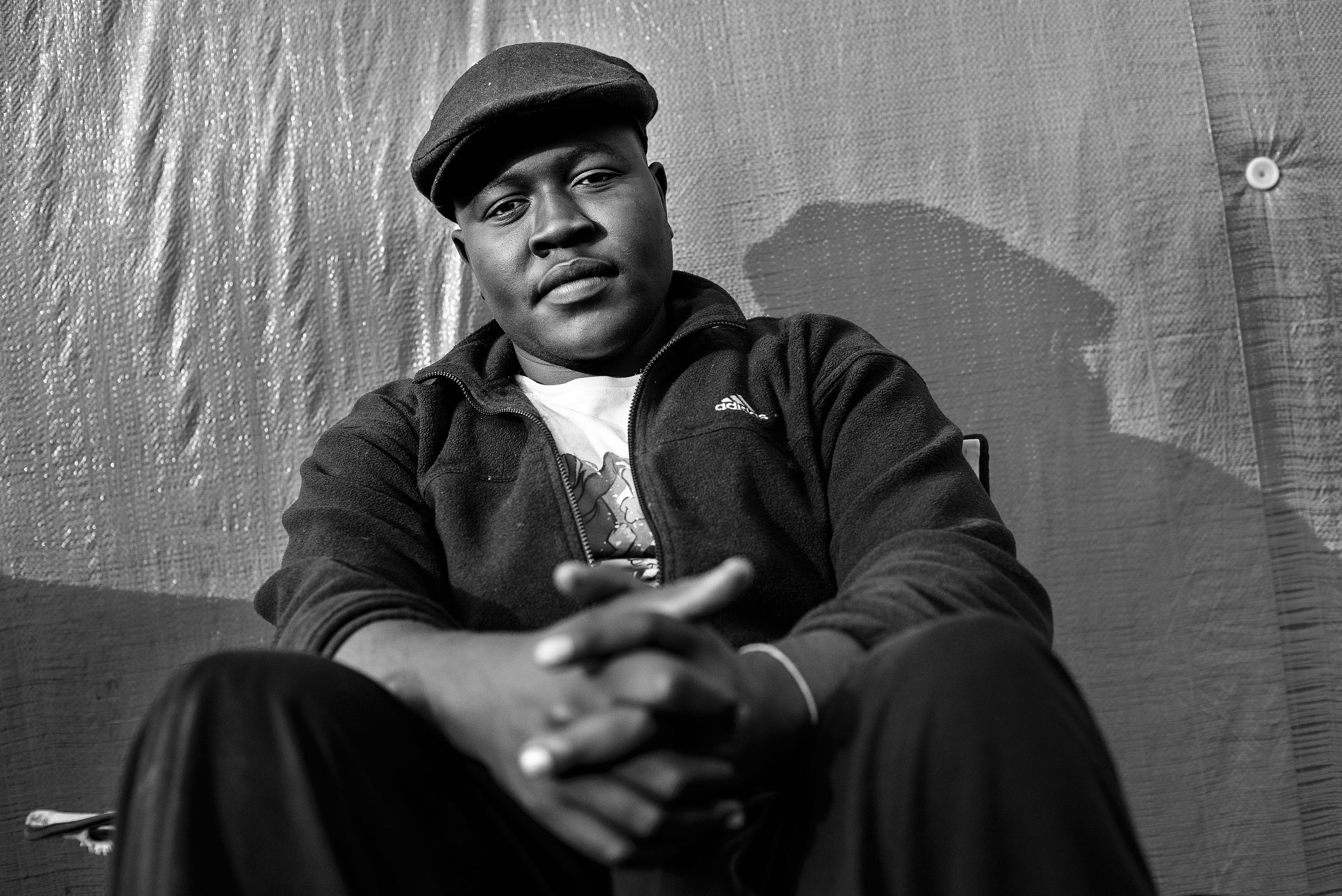 As I write, following a decision by the French authorities, their shelters and homes are being bulldozed. Once again their community again faces dissolution.

These photographs are an intimate window into the world the Zaghawa community have built for themselves, as the rest of the world continues to turn its back on them. 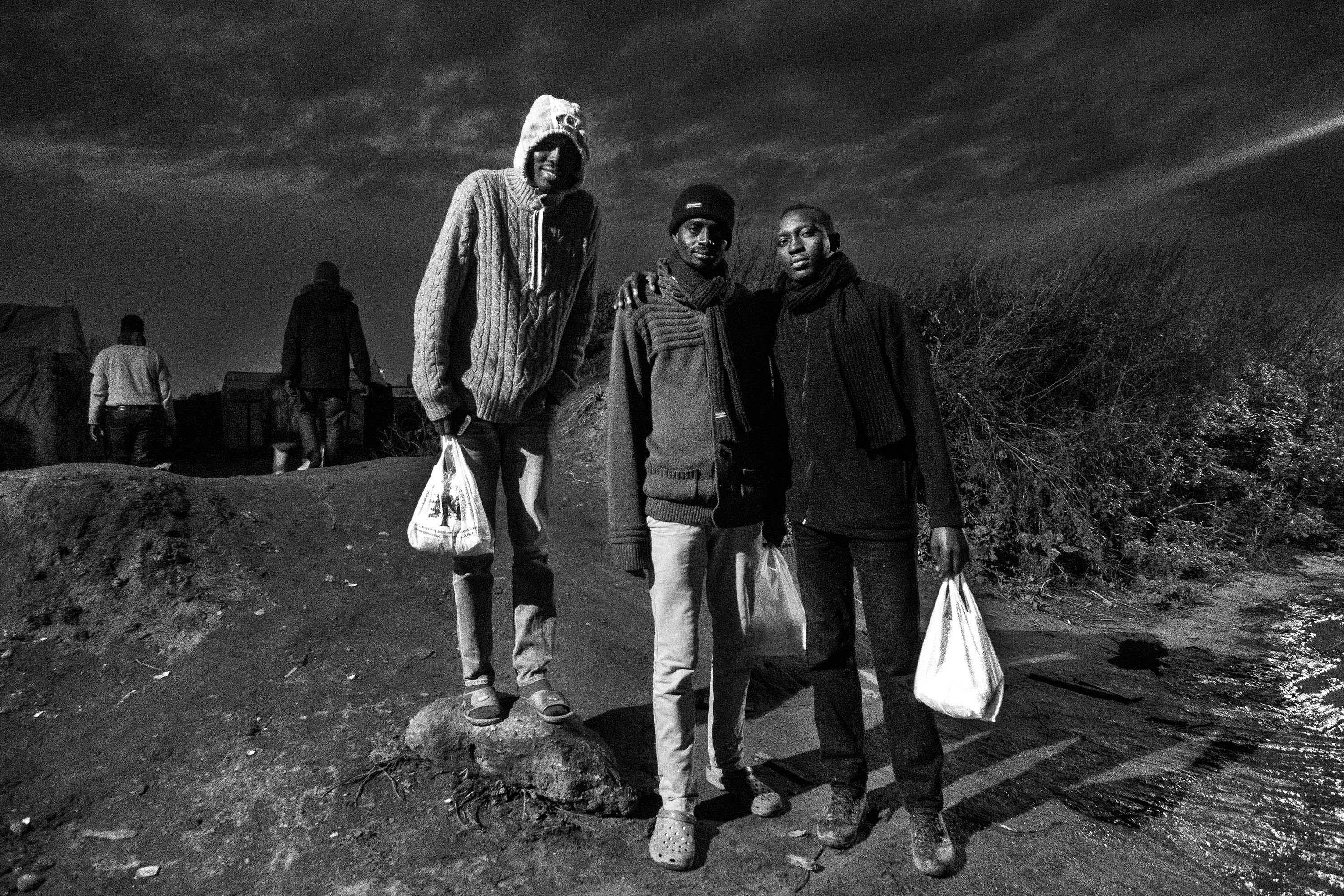 Sudanese refugees after collecting food from the camp’s distribution centre. 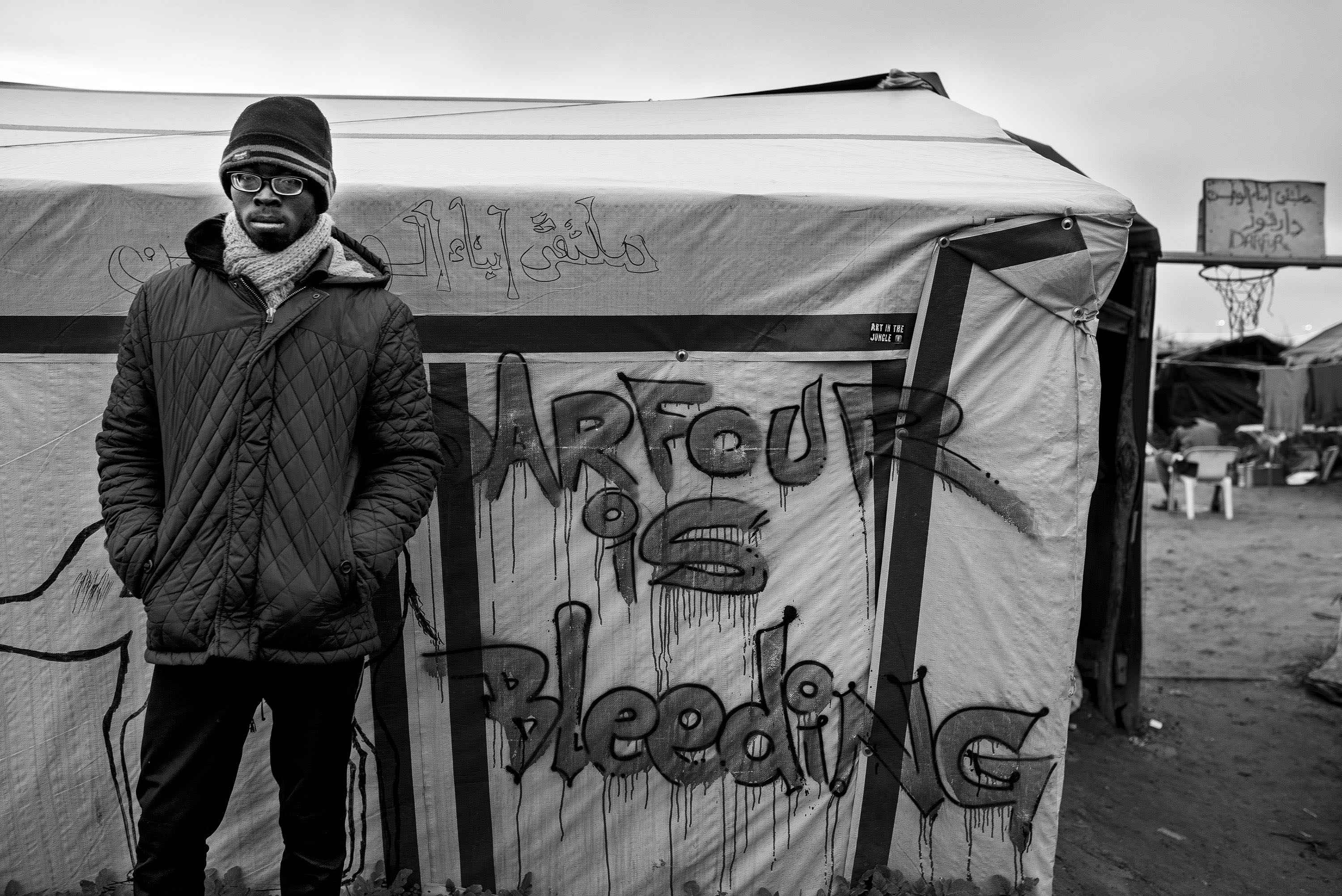 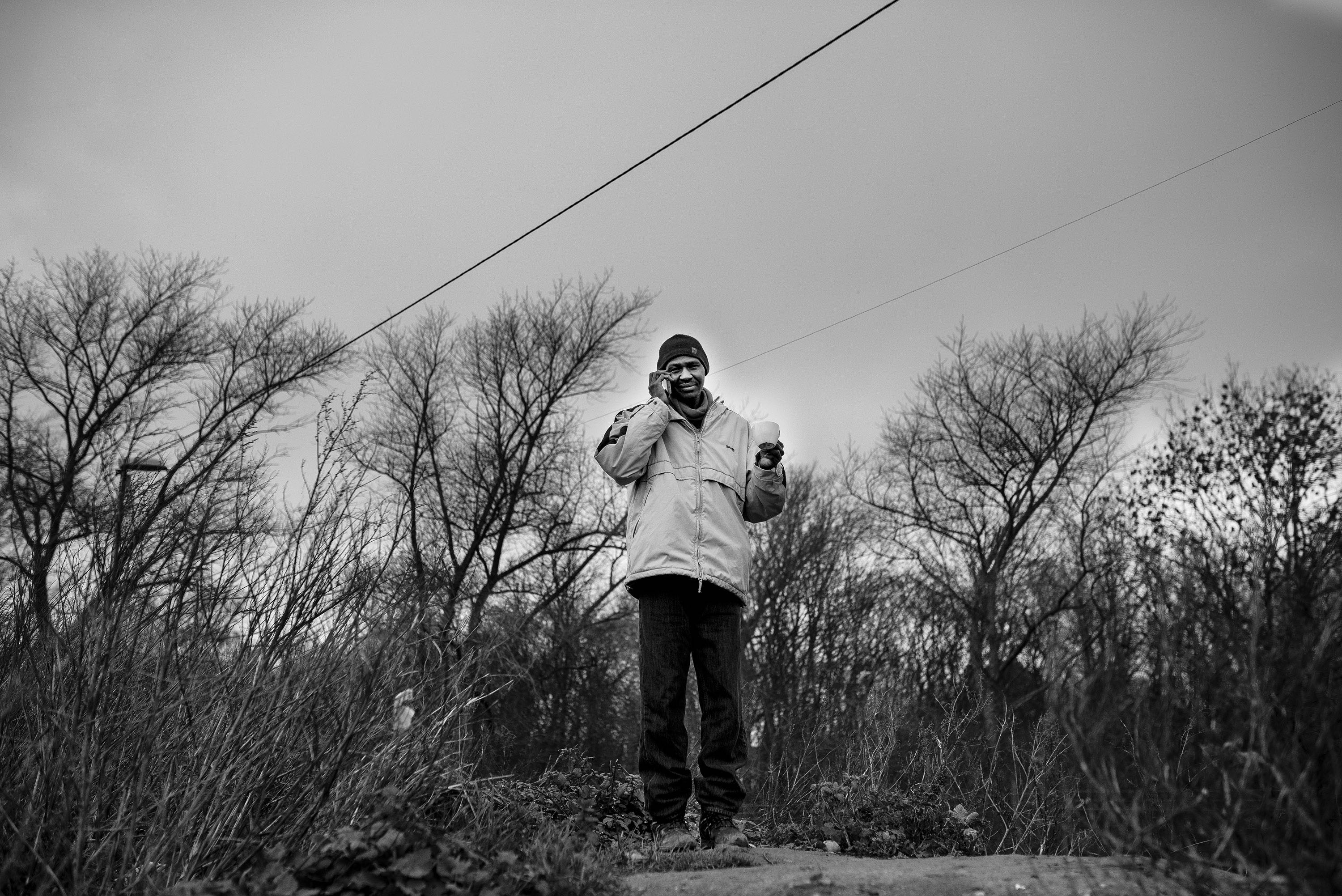 Mohamed takes a call while drinking his coffee. 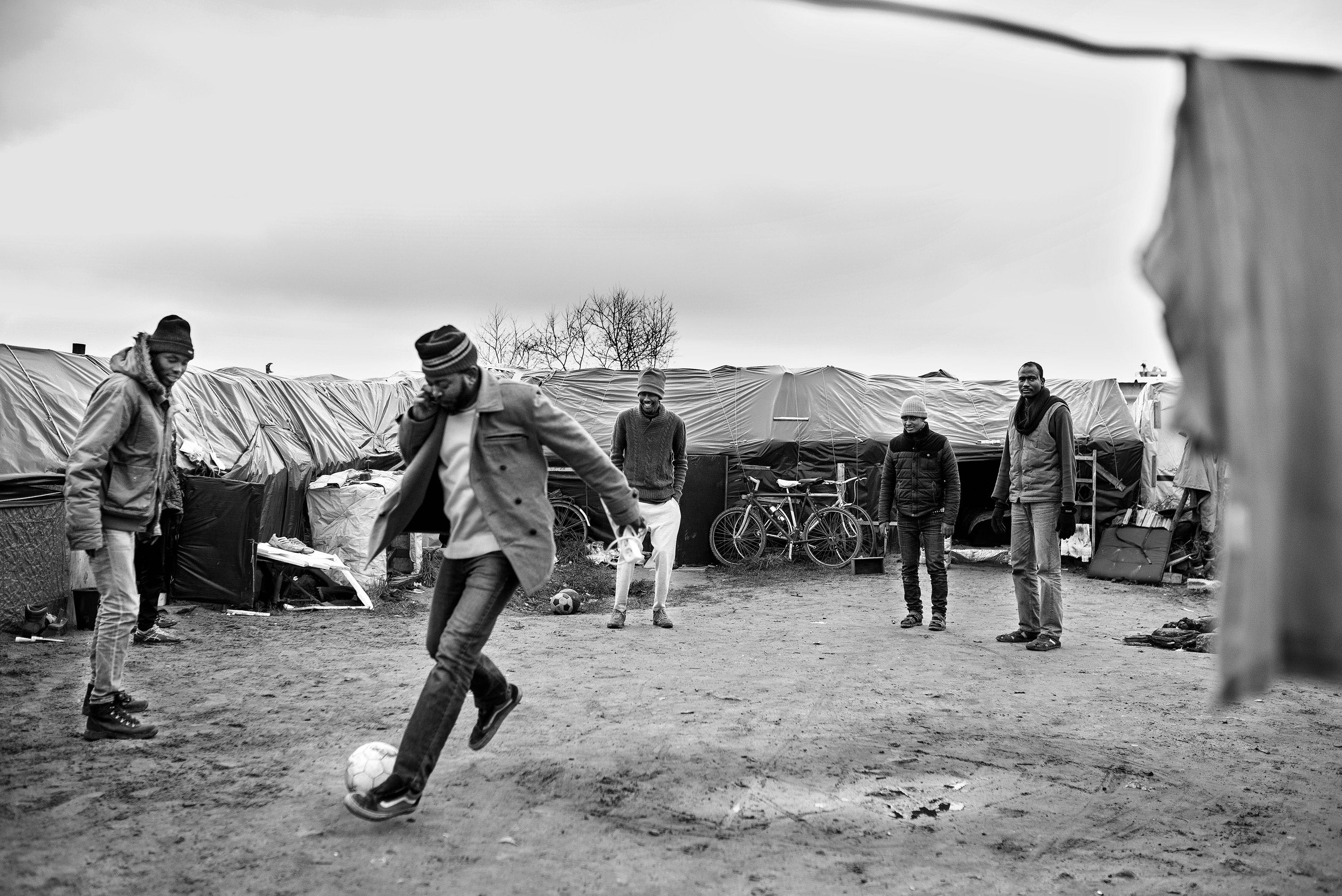 Playing football at the camp. 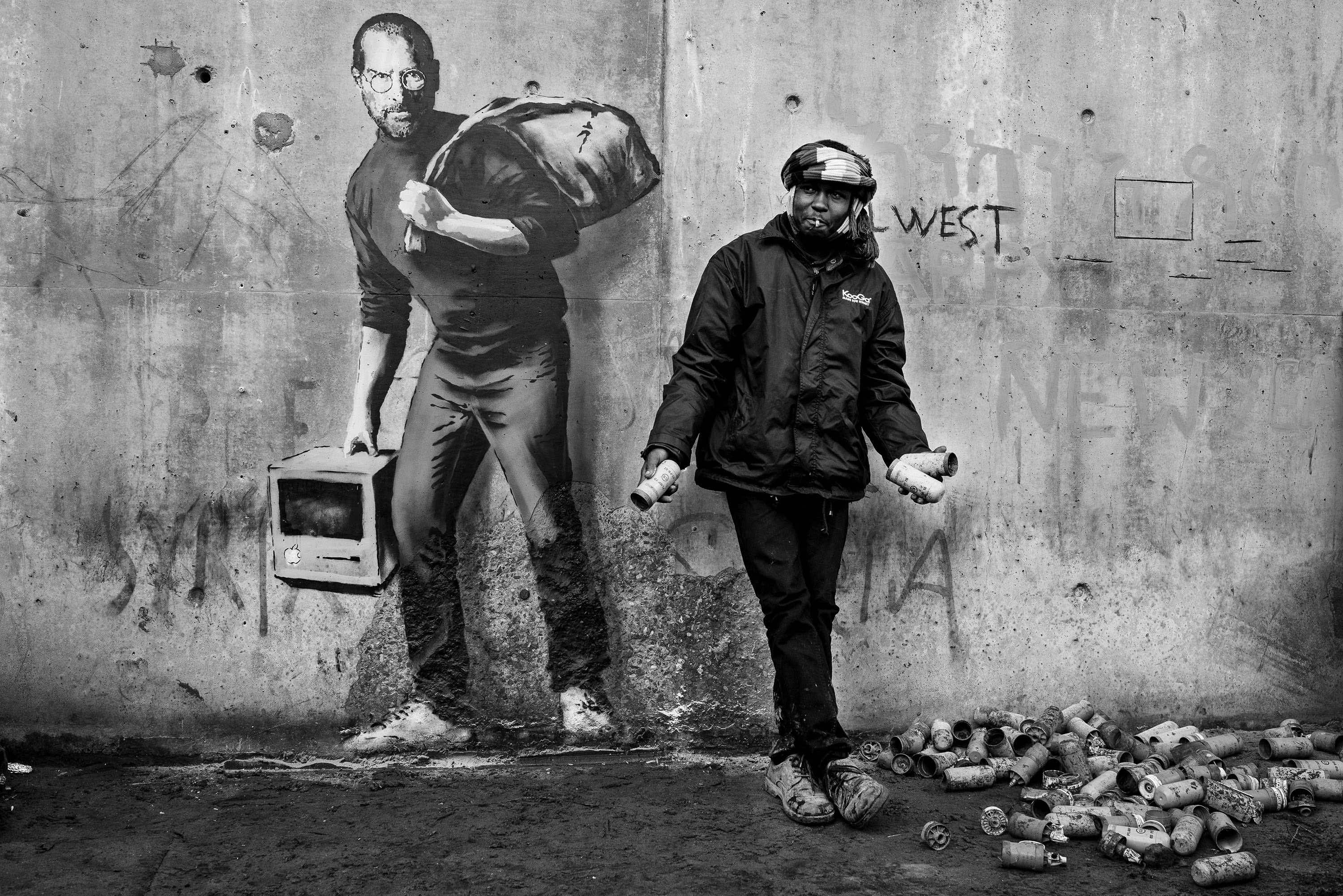 A refugee holds exploded tear gas canisters beside the Banksy mural at the entrance to The Jungle. 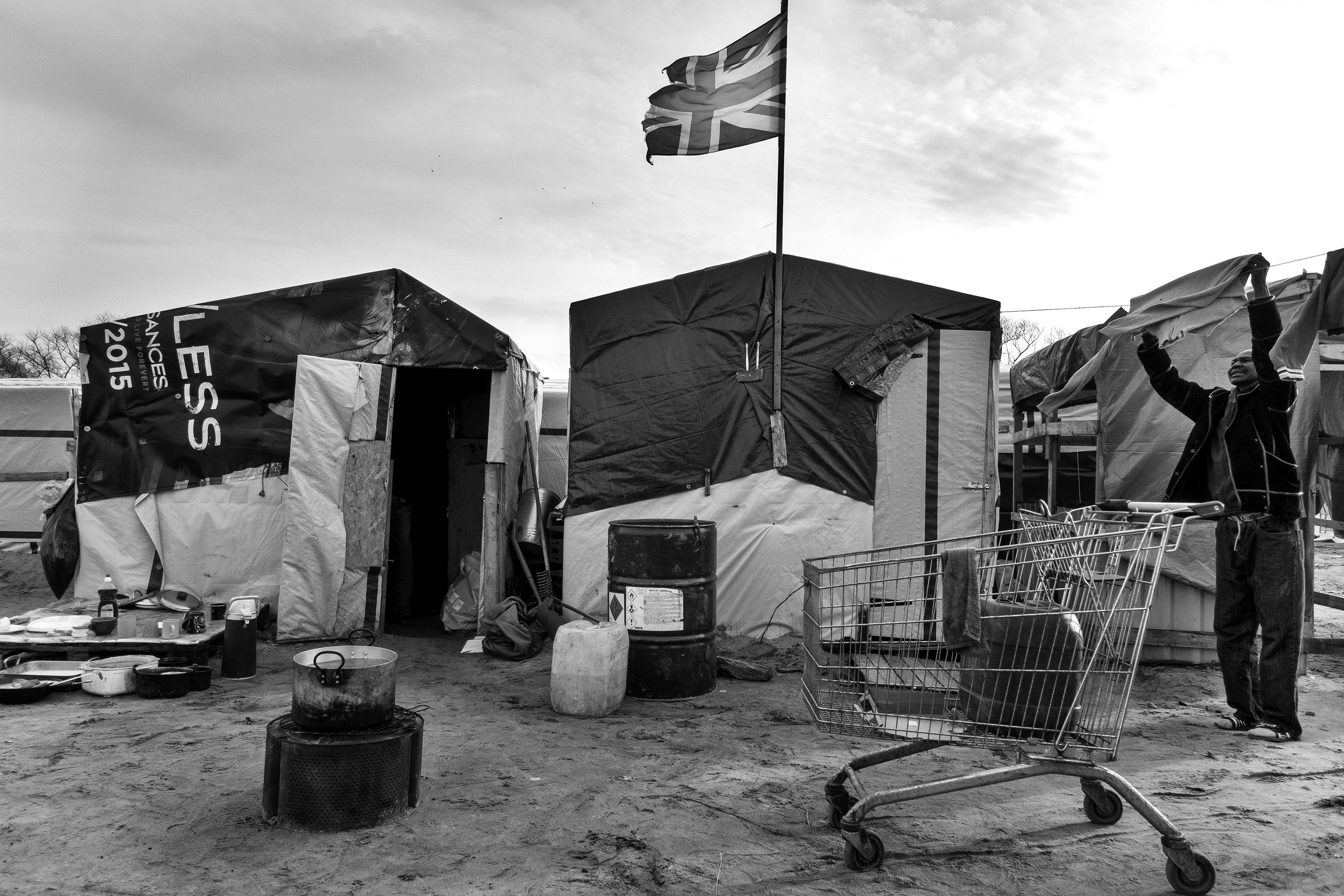 Abdul hangs out his clothes. 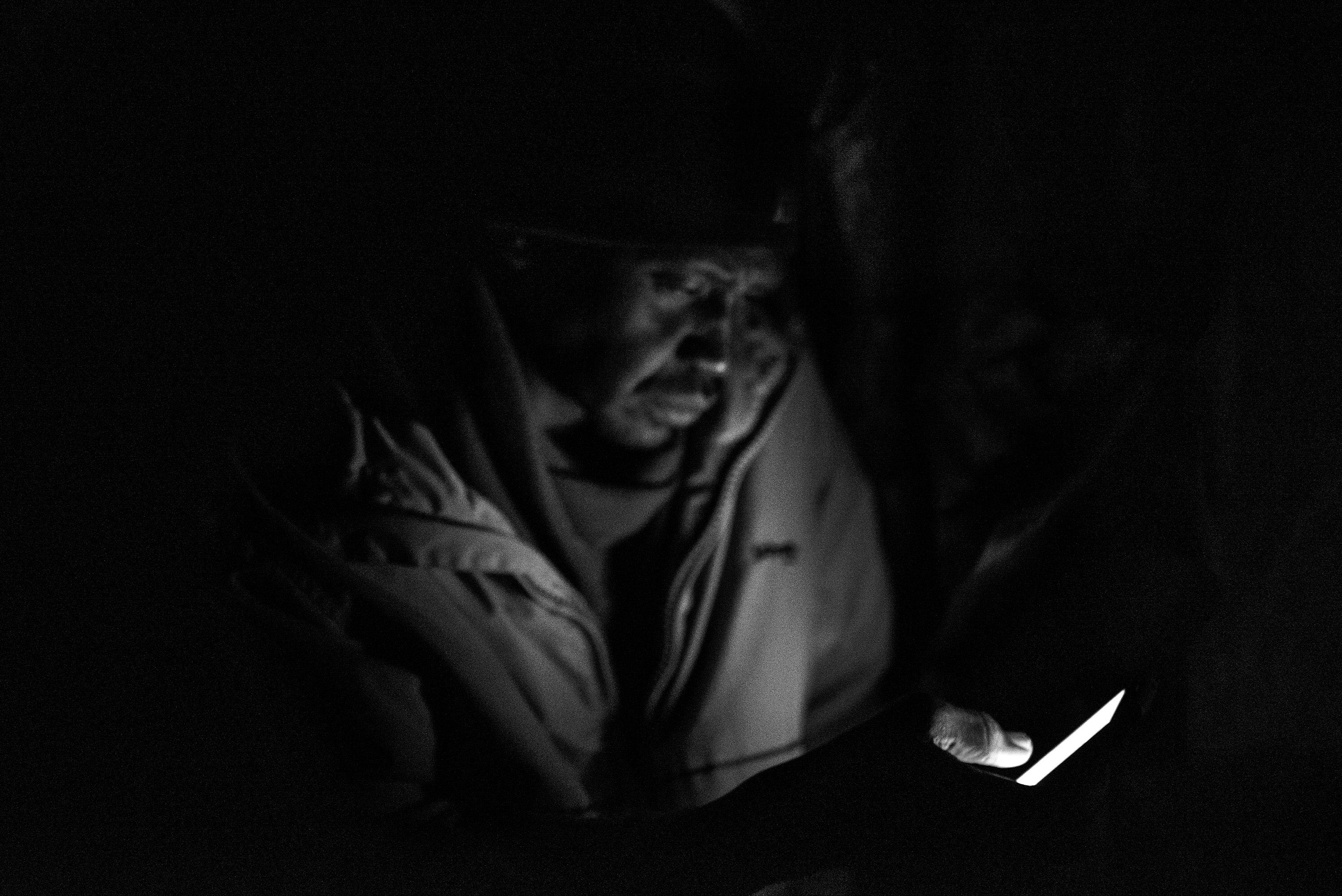 In the evening Ahmad stays in his shelter, using his phone to speak with relatives and friends. 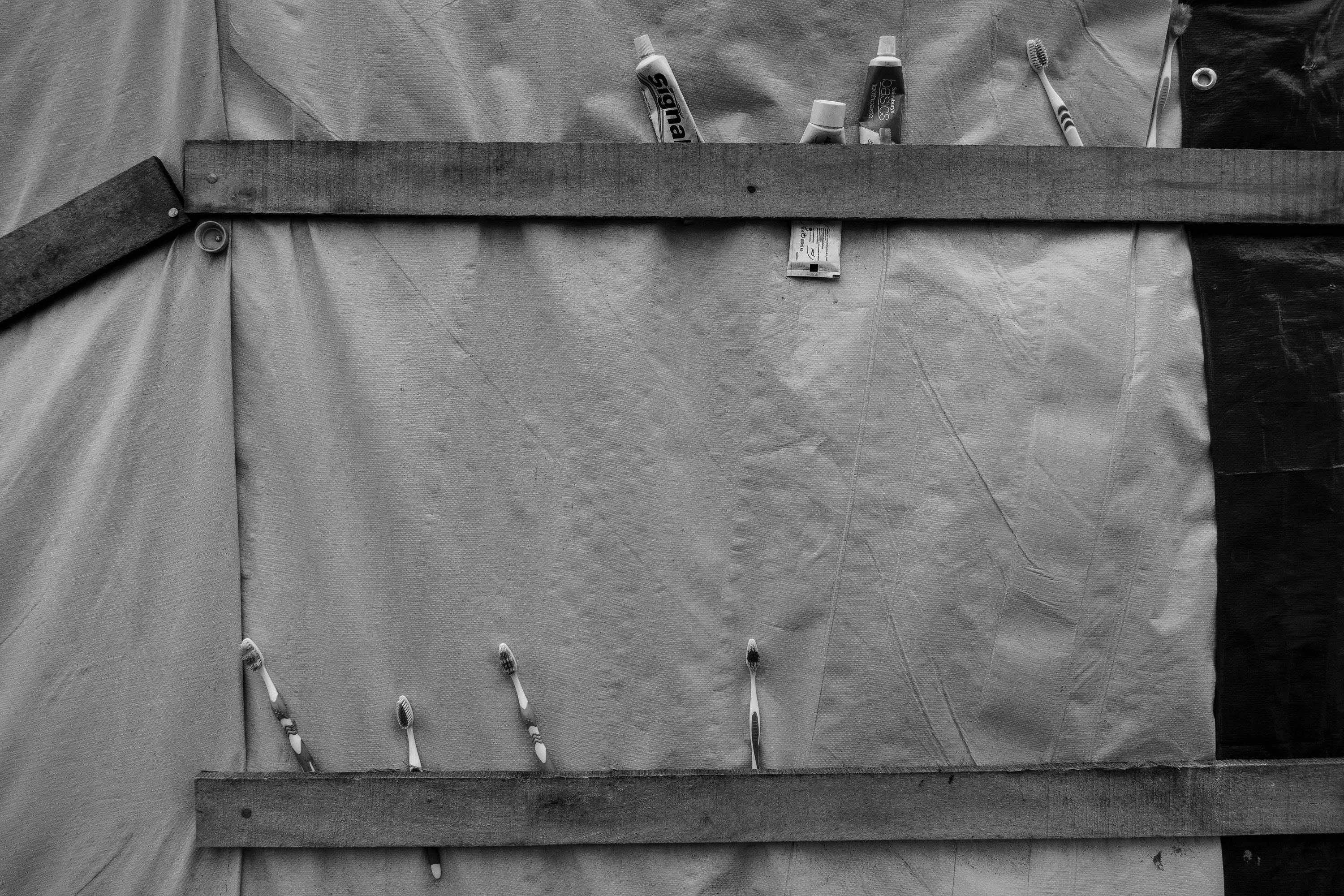