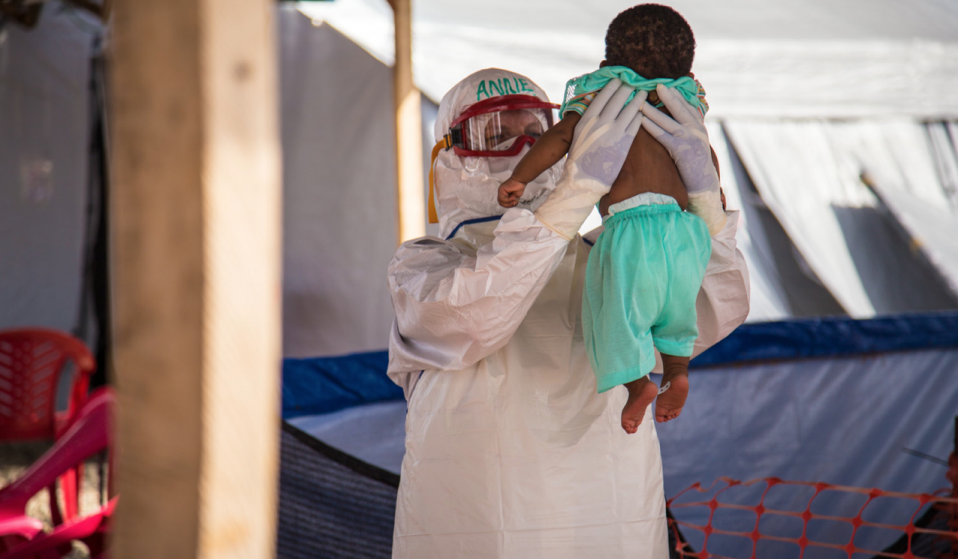 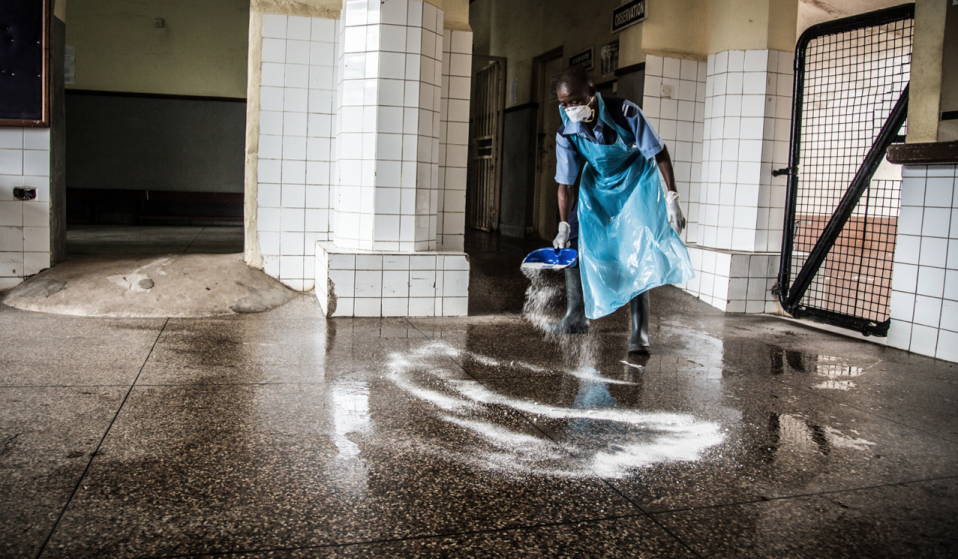 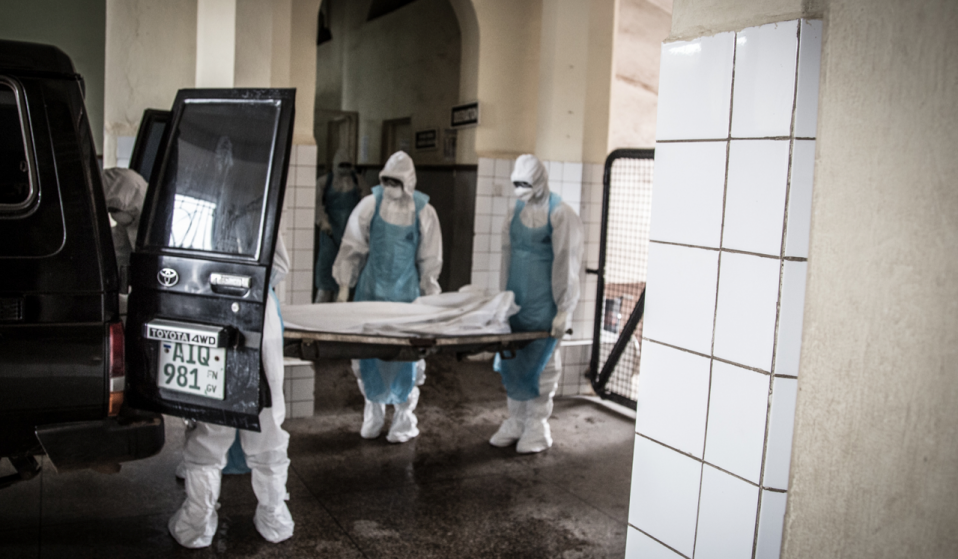 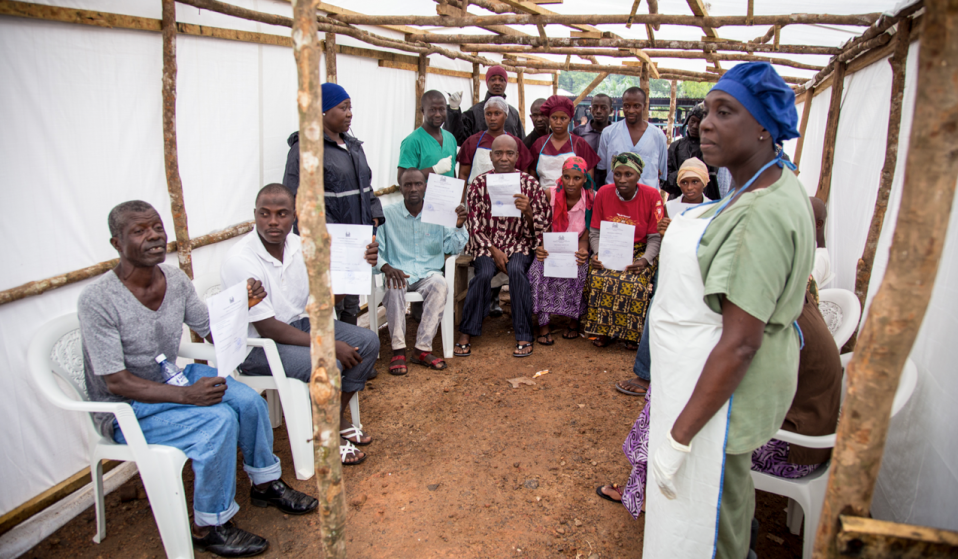 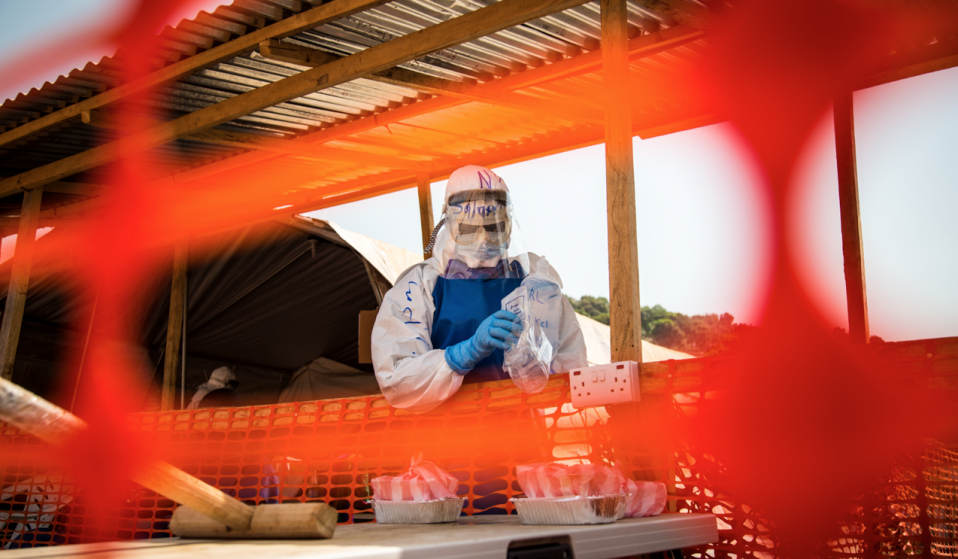 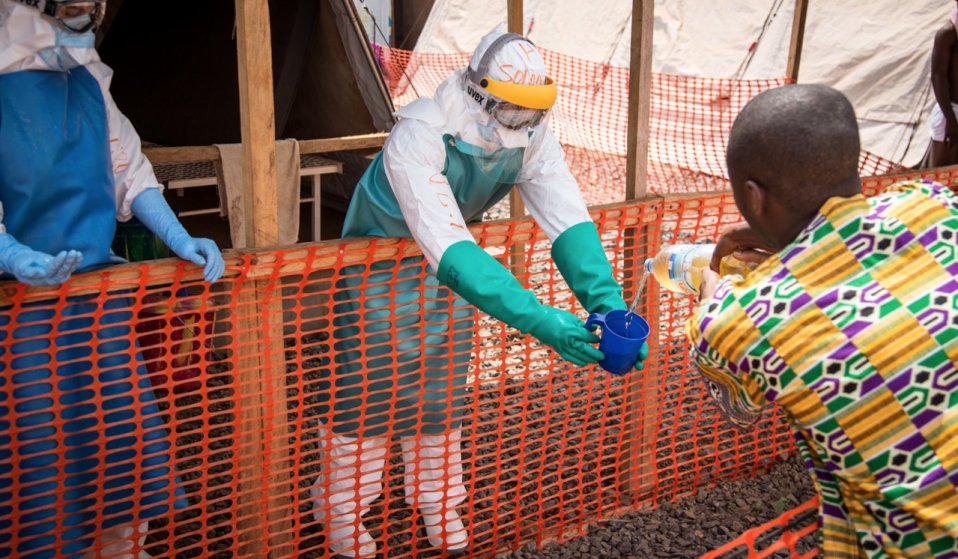 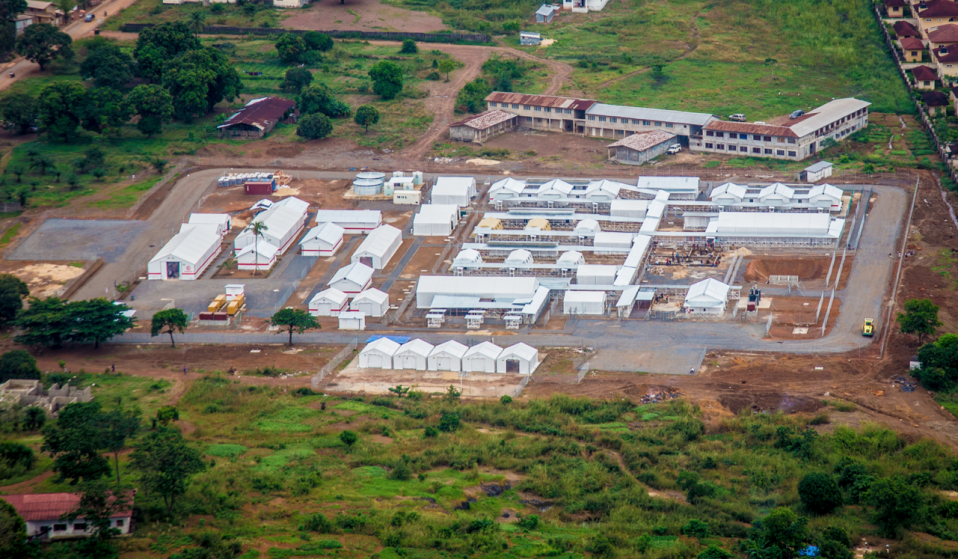 i
The 100-bed Ebola Treatment Centre operated by Emergency in the west of Freetown, Sierra Leone. 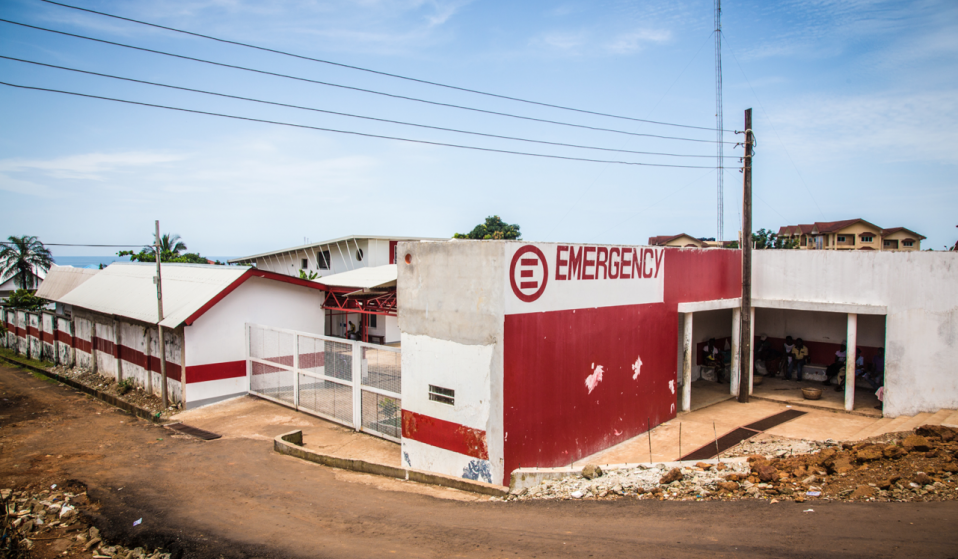 i
EMERGENCY clinic in Goderich, in the west of Freetown, Sierra Leone. 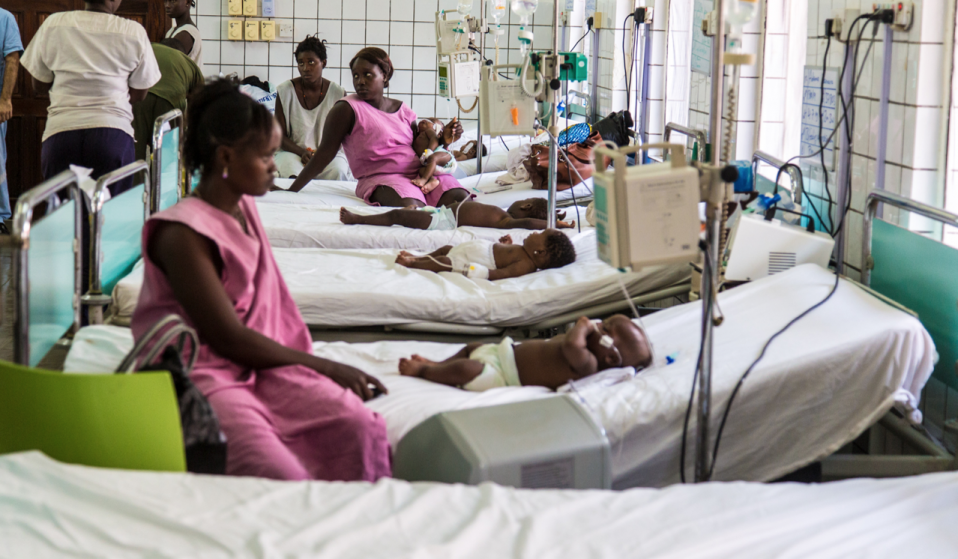 i
The emergency pediatric centre guarantees free healthcare to children under 14 years of age in Sierra Leone. 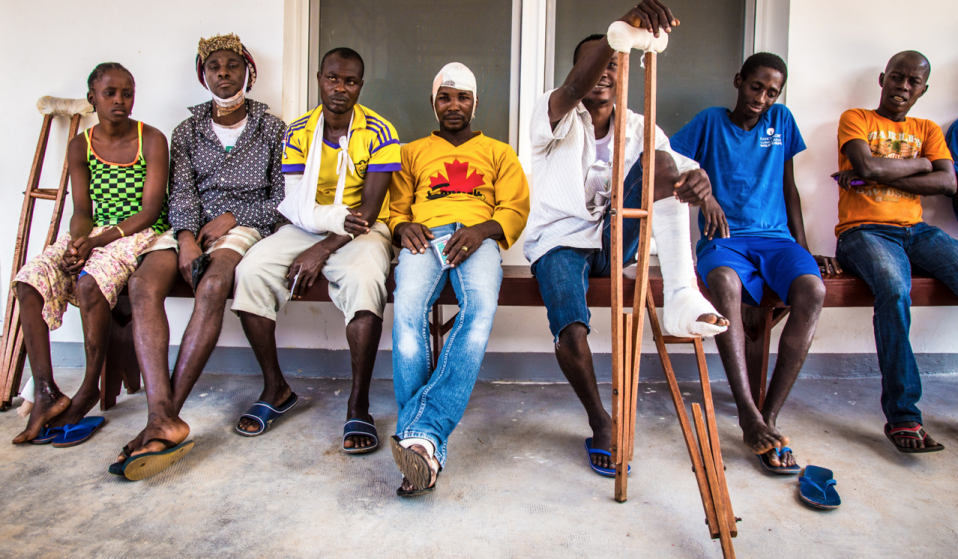 i
Patients needing checkups and dressings changed wait outside the EMERGENCY surgical centre. All care at the centre is provided free of charge. 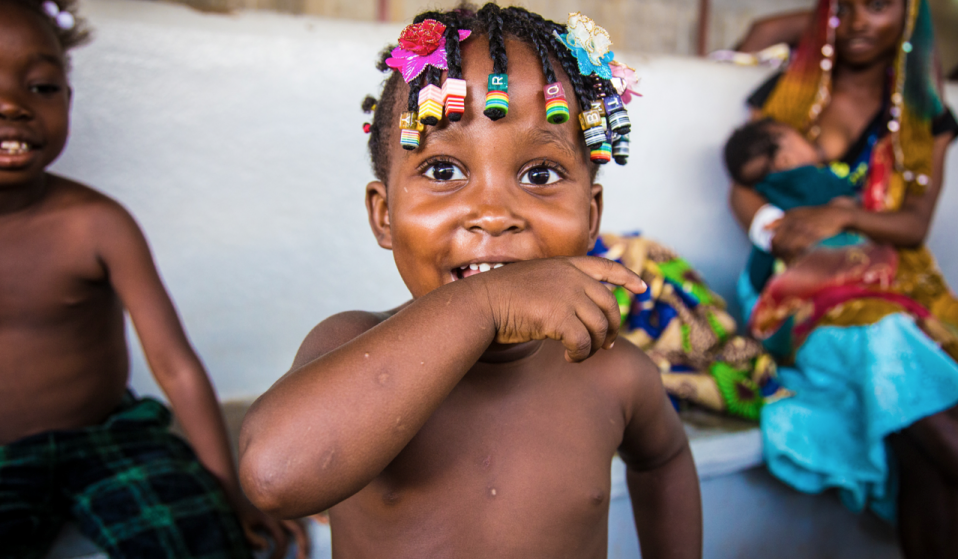 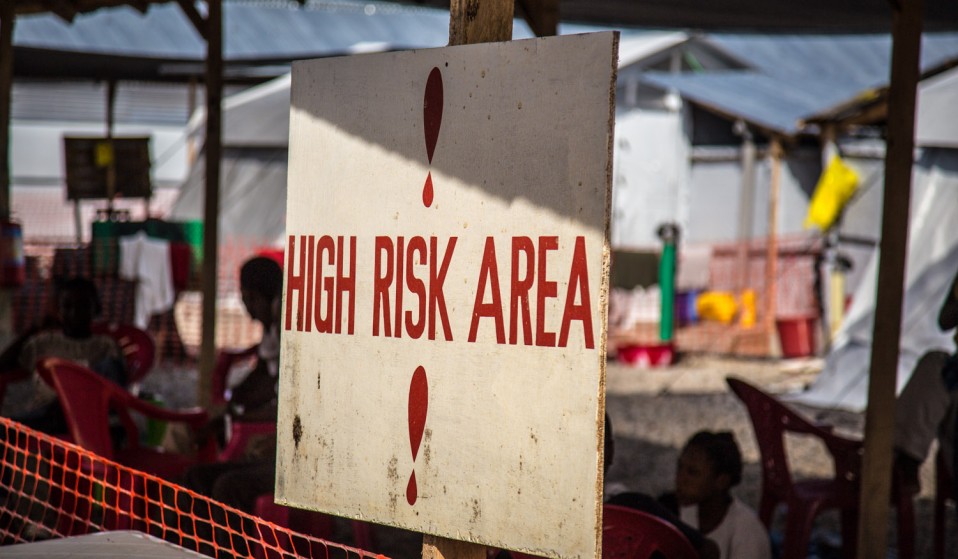 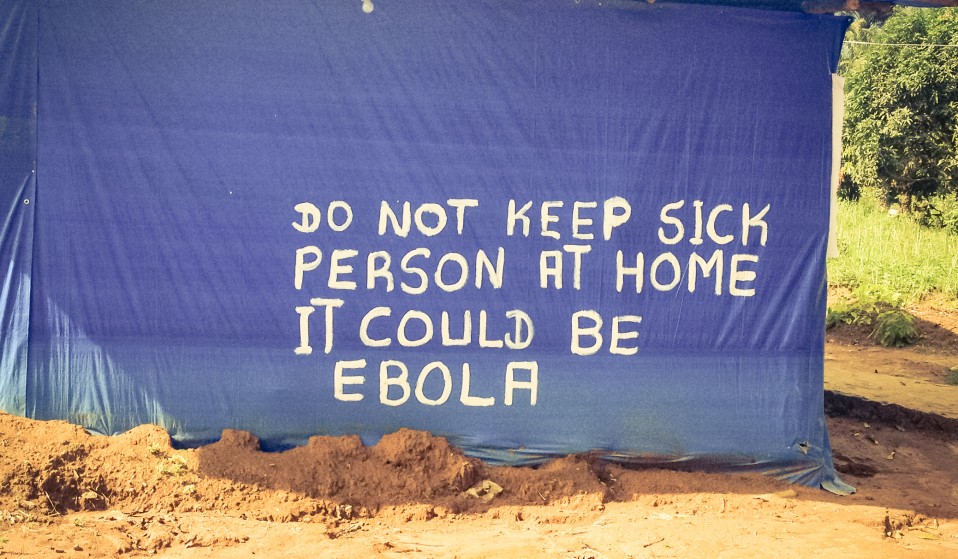 Photojournalist Michael Duff shares his experiences of Ebola – the most severe acute public health emergency of modern times – in his adopted hometown of Freetown, Sierra Leone.

Photojournalist Michael Duff shares his experiences of Ebola – the most severe acute public health emergency of modern times – in his adopted hometown of Freetown, Sierra Leone.

Michael Duff is a freelance photographer and filmmaker who has been living in Sierra Leone for three years. He has been covering the Ebola outbreak for numerous NGOs and government facilities – including EMERGENCY, an Italian organisation founded in 1994 by war surgeon Gino Strada – since the first cases were reported in Spring 2014.

Michael was particularly interested in EMERGENCY as it is “slightly off centre from the Ebola stories that we are seeing everyday”. The organisation has been operating in Sierra Leone since 2001, providing free healthcare to around half a million people. Their main clinic in Goderich, in the west of Freetown, provides world class trauma surgery and paediatric care free of charge, but when Ebola broke out they also built a dedicated Ebola treatment unit nearby.

Sierra Leone is a country that Michael loves and he has witnessed the devastation caused by Ebola firsthand. He has been appalled and impressed at different international responses and is striving through his work to represent the reality of the situation as honestly, and unsensationally, as possible.

This is his story.

How long have you been documenting EMERGENCY in Freetown?
I began documenting the work of EMERGENCY in October 2014. The Ebola virus was at its height and very quickly taking over all parts of Sierra Leone. The international response was severely lacking and most healthcare facilities were closing down. EMERGENCY hospital was one of the few organisations that continued to provide care to people and for 40 days during the peak of the outbreak in Freetown it was the only hospital continuously open.

How did you witness Ebola affect the community?
I saw the effects of Ebola first hand as both a journalist and as a resident of Freetown. Sierra Leone has been my home for the past three years and it was devastating to see the country decline especially when it was just beginning to rebuild itself after the civil war. Communities were completely wiped out – I’ve visited villages where more than half of the population have died from Ebola. Sierra Leone is a very physical country – people shake hands, people hug, people embrace, people help others in need. When someone falls ill in Sierra Leone it is most often left to the family members to care for that person; to provide care, to feed them, to wash them. This body contact with sick people is likely one of the main reasons the virus spread so quickly and often wiped out entire families.

What was EMERGENCY’s response to the epidemic like?
When most other international and national organisations were pulling out of the country or closing down EMERGENCY stepped up to ensure that their clinic could continue to operate. They built a small isolation unit at their main hospital where people suspected of Ebola could be isolated and cared for properly. It was very quickly realised that something more was needed and as such they built a dedicated Ebola treatment unit in the west of Freetown. The unit had capacity for 22 patients and during the height of the outbreak there was never an empty bed. If a patient died, or was discharged as a survivor, their bed would be taken by a new patient within a couple hours.

As the outbreak worsened and as international support and funding came into the country EMERGENCY expanded their Ebola Treatment Centre with the help of the British military. This centre continues to operate.

EMERGENCY hires local and foreign staff. Do you think that combination allows the NGO to better deal with the community’s needs?
EMERGENCY has been in Sierra Leone for more than 10 years and has a strong understand of the country, the people, and the culture, as well as having a strong staff of both Sierra Leonean and Internationals. This is crucial in ensuring an effective response to the outbreak. Ebola is a very intimate disease – it effects entire families, it holds a huge amount of stigma, and if it is not isolated quickly it will continue to spread. Having Sierra Leonean staff who can speak the language and have the trust and support of their own people is the only way that Ebola can be eradicated from this country.

What did you think of the media response to the epidemic?
The initial media response was incredibly sensationalist and I believe led to unnecessary fear and stigma around the world. This reporting hindered the international response as airlines cut off flights to the region and healthcare workers who may have volunteered to help were frightened to come. More generally the media continued to focus heavily on the international response, the european healthcare workers, the few infections of international staff and overlooked the hard work being done by Sierra Leoneans. Sierra Leoneans have been working on the response from day one, without break, without R & R (rest and recuperation), most often without pay, and yet we hear little about them in the media.

How do you think we can avoid another outbreak like this one?
The international response to Ebola in West Africa was appalling. International agencies such as The World Health Organisation were too slow to react and did not have the capacity to face an Ebola outbreak. The international community needs to be ready and willing to respond to the next outbreak swiftly and effectively. Having said that, in countries with poor healthcare infrastructure such as Sierra Leone, Guinea and Liberia, the international community could do more to building up healthcare services and ensuring that the local capacity is strong enough to avoid such a future outbreak.

As a photographer documenting the outbreak you had to be very close to the disease. Were you afraid?
Throughout the outbreak I did come close to the disease on many occasions (and still do). I regularly visit Ebola Treatment Centres as well as government hospitals, quarantined communities and villages where people were dying of the virus. I was always very careful and took all the necessary precautions so I don’t feel that I was ever at any real risk of contracting the virus myself. If you understand how the virus is transmitted it is very easy to protect yourself.

Ebola can only be caught by direct contact with the bodily fluids of a symptomatic person – so the first rule is don’t touch anyone. Second: don’t get close to sick people or body fluids. I would wash my hands in chlorine sometimes 20 times per day – every time I enter and leave a hospital, every time I get back in my car, every time I enter a shop or restaurant, before I eat. It became commonplace, and still is here in Freetown, to rinse hands in chlorinated water. The smell of chlorine will be a permanent reminder of this outbreak for me.

Having said that, I was somewhat worried the first time I travelled up to Kenema. More worried because I didn’t know what to expect. The hospital there was a complete mess – there was no international response in Kenema, just an overrun and under-resourced local hospital. But I took many more precautions that were probably necessary and was never at any real risk.

What did you feel your responsibility to the people you were photographing was?
I had already been living in Sierra Leone for a couple of years before the outbreak and it is a place I have grown to love. Sierra Leone is a safe and beautiful country with very friendly people. I felt that I couldn’t simply pack my bags and leave. I wanted to stay and document what was happening in a way that would hopefully represent the reality of the situation. I tried to capture the full spectrum of the outbreak by speaking to Sierra Leoneans in the communities, local doctors and healthcare workers, as well as the international staff. As a photojournalist we don’t always have editorial control over how our images are used so there was always concern that the images could be taken out of context – however, I always tried my best to ensure that the photograph itself told the story.

You can see more of Michael’s work on his website.

Linkedin
RELATED ARTICLES
OTHER ARTICLES
Sixteen features British actor Roger Jean Nsengiyumva whose Rwandan past is testament to what can happen when you persevere against all odds.
Elijah Zgambo may be responsible for the evolution of skateboarding in Zambia, but it was dodging skinheads as a black skater in Russia where he first discovered his passion.
Thanks to DIY education project Waves For Change the young people of Khayelitsha are getting a chance to experience the transferable skills of surfing.