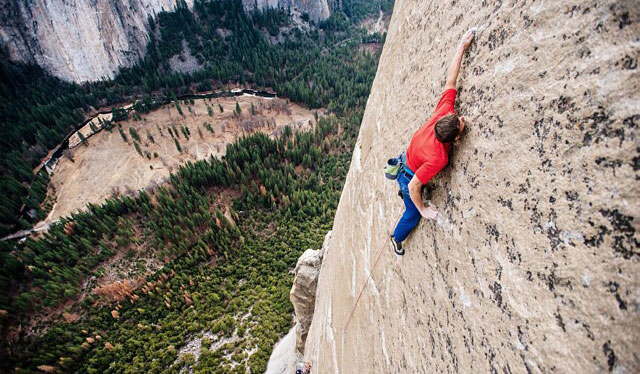 Kevin Jorgeson and Tommy Caldwell made history January 14 by free climbing the Dawn Wall route of El Capitan. But why is the feat so special?

Kevin Jorgeson and Tommy Caldwell made history January 14 by free climbing the Dawn Wall route of El Capitan. But why is the feat so special?

It’s an incredible feat but if, like me, you don’t really know your dyno from your deadpoint, here’s a breakdown of some facts about the historic achievement and why it’s so special.

This one is self-explanatory, but good for reference.

This is how reporters and family members were able to meet the two climbers at the peak. They did not helicopter in, as I first thought.

There Are Many Routes To The Top

This is not the first time El Capitan has been scaled. Legendary climber Warren Harding led a team to the summit as early as 1958 along a route known as ‘The Nose’, which follows the massive prow between the Southwest and Southeast faces, using fixed ropes. Many others – including Patagonia founder Yvon Chouinard – have done similar climbs up alternative routes, there are about 100 routes up in total.

Dawn Wall Has Been Climbed Before

In 1970 Warren Harding and Dean Caldwell climbed the Dawn Wall, a really difficult ascent on the Southeast face (which the sun comes up on), also using fixed ropes.

What makes Kevin and Tommy’s ascent so spectacular is that they free climbed – a technique in which climbing protection such as ropes and nuts may be used to protect against falls but cannot be used in ascending the climb – the Dawn Wall route. So they could only use natural rock holds for hands and feet. This was thought impossible on this scale, until now.

“If they get it completed, it will be the hardest completed rock climb in the world,” Tom Evans, who first climbed El Capitan 48 years ago, told New York Times. “This will be the climb of the first half of the 21st century.”

There Are Frogs 900 Feet Up

It is much easier for them because they have sticky feet. 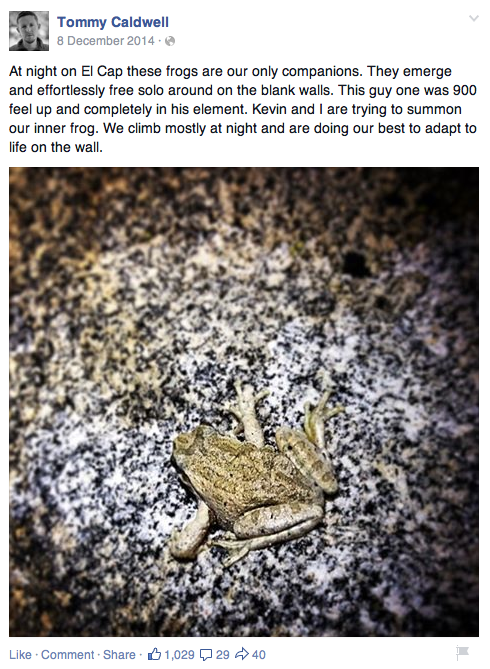 Both Kevin and Tommy have been using social media to document their ascent. Imagine the selfies.

It Can All Come Down To Fingers

The toll that free climbing and the freezing conditions of El Capitan in winter takes on the climbers’ fingertips is extreme. The climbers have to apply moisturisers like beeswax in the night and dutifully file down calluses and nails. They even superglue tape to any cuts to keep going. 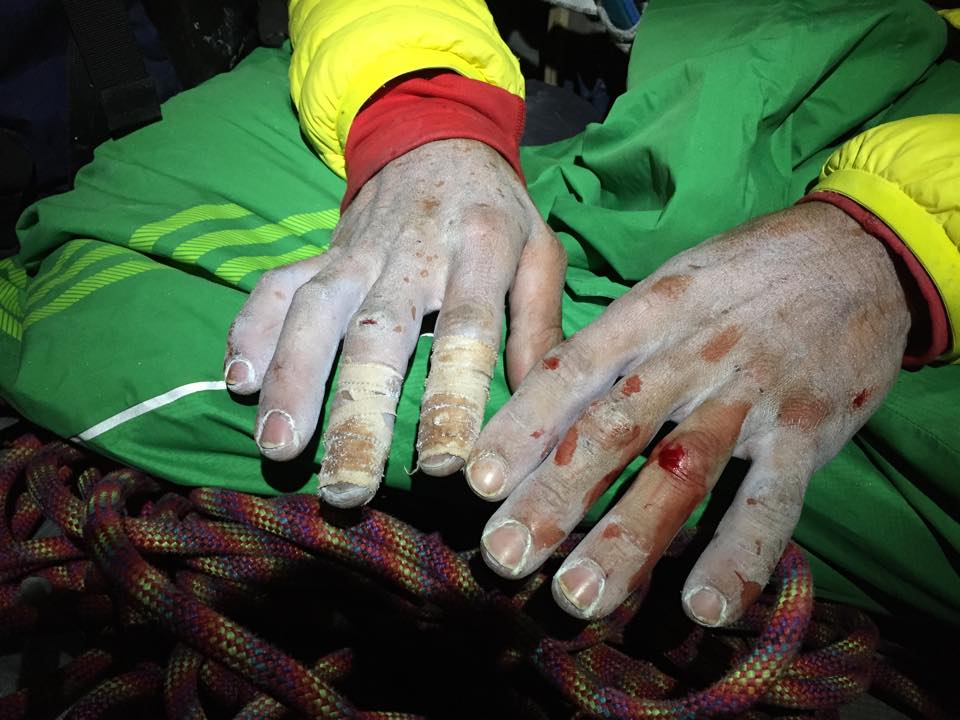 They Sleep In A Tent On The Side 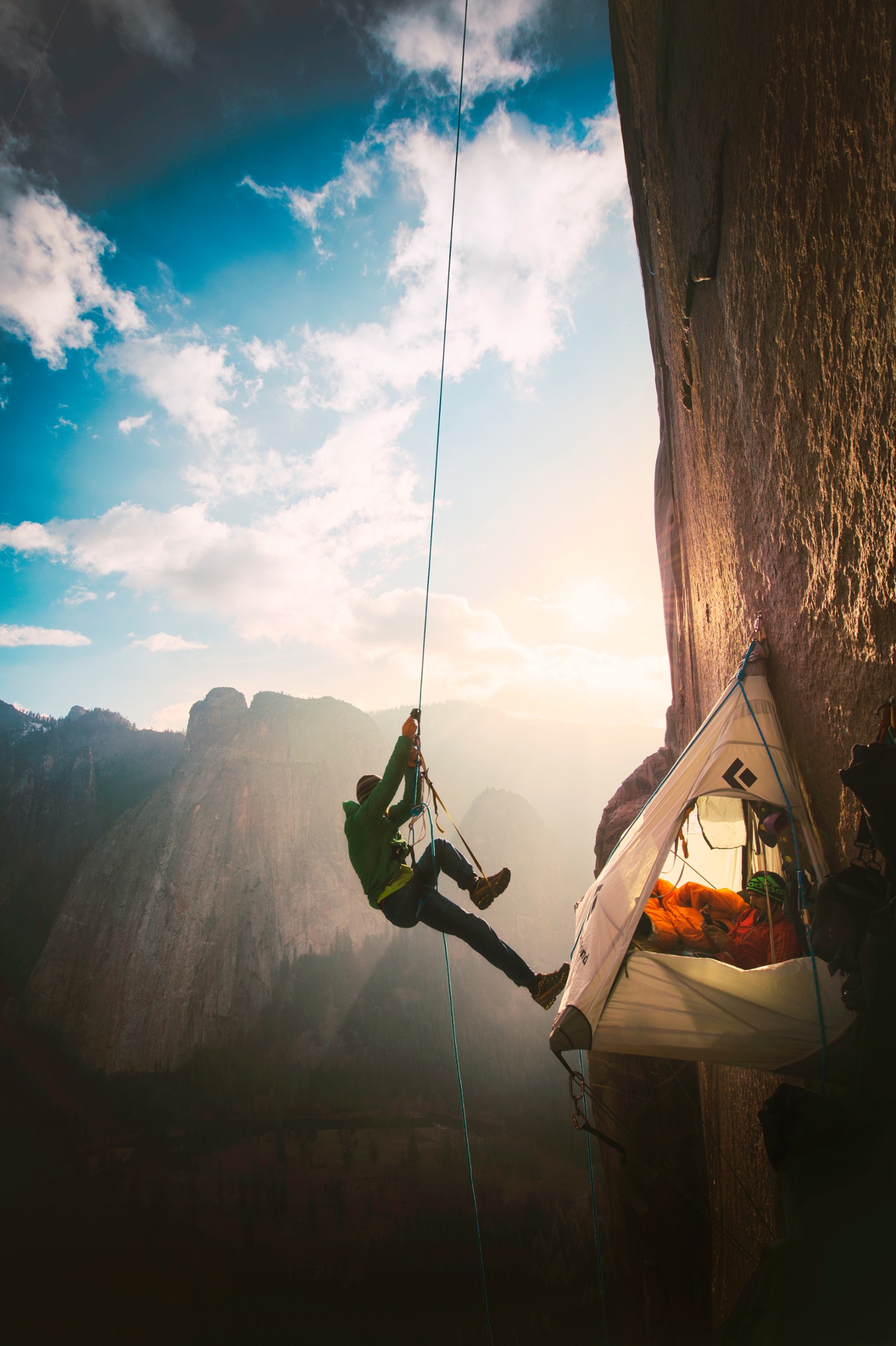 Their Achievement Is An Inspiration For People Everywhere

“I hope [the climb] inspires people to find their own Dawn Wall, if you will,” Kevin told The New York Times, after reaching the summit. “We’ve been working on this thing a long time, slowly and surely. I think everyone has their own secret Dawn Wall to complete one day, and maybe they can put this project in their own context.”

Linkedin
RELATED ARTICLES
OTHER ARTICLES
Your must-do, gotta-see, need-to-eat guide to San Francisco by photographer, writer, skateboarder and all-round rad guy Isaac Mckay-Randozzi.
DIY surfing wants you to buck the system! But in the cold, hard, green light of day, can you teach a revolution that should be self-taught?
New Age surfers, the Malloy brothers, open up on each other, the state of surf culture and the need to reinvent the way we grow our food.