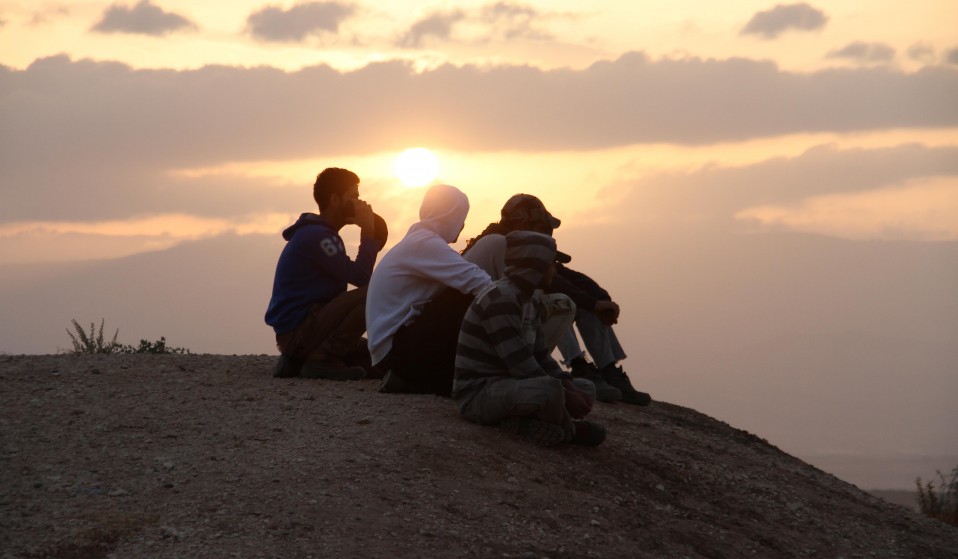 Meet the Palestinian men, women and children who work on and help build Israeli settlements in the West Bank deemed illegal by the international community.

Employing the Enemy is a new book about the Palestinian men, women and children who work on and help build Israeli settlements in the West Bank: settlements deemed illegal by the international community.

“They are forcing us, because of the situation, to have our kids leave the school early,” Jamela, a kind-hearted women in her early 50s, explains from Az-Zubeidat village a few miles up the valley and north of the [Palestinian village of] Fasayll. The village’s dusty streets have dozens of young children under the age of ten playing with whatever they can get their hands on. Groups of kids run up and down the roads chasing each other, one young boy plays with a discarded hubcap which he drags along the ground with enthusiasm using a piece of string attached to the metal. There is a distinct lack of children aged over ten.

“They’re working in the settlements,” Jamela says when questioned about the village’s other children. Jamela works in a settlement farm herself, earning 60 New Israeli Shekels (NIS, around £13) for between 8–10 hours picking herbs. It’s a common job for Palestinian women in the valley. Women make up around a tenth of all Palestinian workers in the settlements, working almost exclusively in the agriculture and service sectors.

They are subjected to a greater degree of exploitation by their employers with wages that are on average just half of what adult Palestinian male workers get on a daily basis. Jamela earns around 7 NIS an hour, but for female Palestinian settlement workers, this is the norm.

Jamela’s children work in the settlements too. She desperately wishes they didn’t have to. Behind her on the wall of her home, a colourful Bedouin farming scene has been painted out. Shepherds and sheep all going about their daily business in the valley. It’s a scene from Jamela’s childhood, before the occupation.

“We don’t have this life anymore,” she says gesturing towards the mural behind her. “Look at the settlers, look at their kids. Their kids can go to school, get an education, they can become engineers, pilots. Not like our children.”

Away from Jamela’s home, half a dozen Israeli army jeeps rumble slowly by on the nearby Highway 90. Following them, an armoured Caterpillar trudges behind – it’s a convoy that

brings fear into the heart of Palestinian communities here. Home demolitions are a daily occurrence in the valley, where it is virtually impossible to get any form of building work authorised by Israel. Further down the highway, in an area safe from the military jeeps, for today at least, 14-year-old Zacharia and 16-year-old Mohammed wait at the side of the road near Tomer and Gilgal settlements as their day’s work comes to an end. Zacharia gives an enthusiastic ahlan-wa-sahlan (welcome in Arabic), but looks exhausted. It’s hot, the sun is beating down, and both have been working the fields since 6am in the morning.

They’re lucky if they manage to get a thirty-minute break from picking peppers and onions all day, they say. Moving away from the busy highway, and settling under the welcoming shade of a nearby tree amongst the green Khubeza plant – a native vegetation of the valley that is used by poorer families for cooking – Zacharia begins to talk about his work.

“Last month the tractor drove over my foot,” he says wincing and gesturing towards his left leg as he sits on the ground. “My father had to take me to hospital, the farmer didn’t care. He just

told me I can phone my father and he can take me there. I just had to sit there and wait in pain for half an hour. My family had to pay for all the hospital fees.”

Zacharia’s foot was broken from the incident. The farmer gave him 70 NIS a day for two weeks while he was recovering. The same amount he receives for a day’s shift working on the farm – 15 NIS less an hour than the legal minimum wage. Like almost all Palestinian workers in the settlement farms, the teenager says health insurance wasn’t part of his contract, or an option.

The only contract he received, along with 16-year-old Mohammed who works for the same employer, was a piece of paper he was given at the start of his employment – when he was just 13 – stating that he agreed that he wasn’t allowed to claim compensation if he was sacked or for injuries obtained during work. He wasn’t allowed to begin work without signing the document.

“The settler doesn’t care,” he says. “We have no rights, no insurance. To be honest, the work affects me, it’s hard, I don’t like it, it makes me depressed. But I have nothing else, it’s the only place I can work, and my family need me to help out.”

When asked whether he knew that the minimum wage was 25 NIS an hour, and that the farmer by law had to pay that, Zacharia looks surprised. His eyes light up briefly at the idea of earning so much for an hour’s work before he glances towards the ground.

“I feel used by the farm,” he says quietly.

“It wouldn’t matter if we knew this before or not,” Mohammed says joining the conversation. “He [the farmer] has said before that if one of us takes him to court for anything, then he will fire us all. He has threatened us all with this. We can’t complain about anything, or ask for better conditions or money, because we will make a problem for everyone working.”

It’s not an uncommon threat. Palestinian workers are frequently punished for attempts at forming unions and lobbying for their rights. For both Mohammed and Zacharia, working in the settlements is an unfortunate family affair. Their siblings and parents work in the settlements also, picking and packaging vegetables and dates.

“There are no other job opportunities for us here,” Zacharia says with a palpable sadness in his voice. During harvest season the two teenagers say they have to work from 8am until 8pm. For the 12-hour stint, they receive the same 10 NIS an hour wage. If they tell the farmer they don’t want to work the extra hours, they say they will be fired.

“They don’t have the right to say they are doing something good for us by employing us,” the younger teenager says when asked about what he would say if the farmer claimed they were doing a good thing by employing Palestinians – rhetoric that is often espoused by Israeli politicians when questioned about the use of Palestinian labour in the settlements. “We don’t have any choice but to take their jobs. They know this, so they know they can treat us badly.”

“We have to go,” Mohammed says suddenly as cars continue to rumble past nearby. Both are nervous to be caught speaking about their work, they always have the looming possibility of dismissal hanging over their head. The idea of losing their jobs and putting their families in financial jeopardy is a terrifying one for both.

“You see the children working here,” [our guide] Hamza says after the children swiftly leave. “It can’t be denied. But ask any settler farmer and they will deny that they are employing children in the farms.” Hamza’s not wrong.

“There is nothing like this,” Shaul, an Israeli farmer in Tomer settlement remarks defensively when questioned about child labour in the Jordan Valley settlements. “I don’t know it and I don’t know anyone that does it. Palestinians will always complain.”

Employing the Enemy: The Story of Palestinian Labourers on Israeli Settlements by Matthew Vickery is published by Zed Books.

Linkedin
RELATED ARTICLES
OTHER ARTICLES
A new film from Berghaus traces the story of Adam Raja, who left behind a turbulent upbringing to discover the healing power of climbing.
The action took place in response to the 200 asylum-seeking children who were placed in hotels run by the Home Office who have gone missing.
As she gears up for the release of her first book, the 24-year-old climate activist talks standing up to authority and building a more inclusive movement.
David 'Dee' Delgado’s photo project is about honouring and uplifting the city of his youth, and a world rapidly disappearing under the relentless onslaught of gentrification.
A new podcast is opening up the conversation between trans women and trans amorous men in the hope of building coalitions.
Photographer Sean Maung reflects on documenting a small town in Pennsylvania afflicted by high levels of unemployment, poverty, violence, crime, and addiction.