Issue Archive / Favela ballet: inside a dance school unlike any other 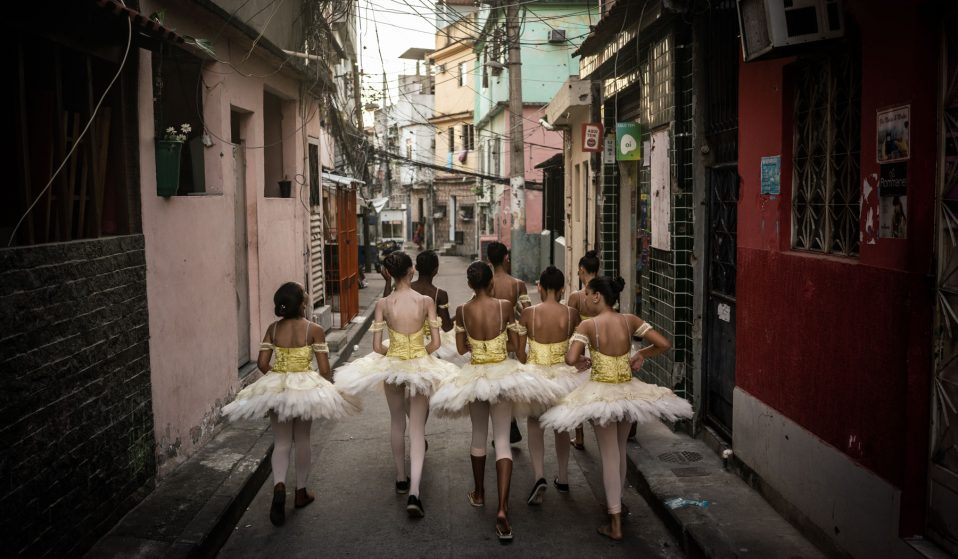 In one of Rio’s toughest neighbourhoods, a makeshift academy is offering young women the opportunity to escape – even if just for a day.

In one of Rio’s toughest neighbourhoods, a makeshift academy is offering young women the opportunity to escape the struggles of life – even if just for a day.

On the third floor of an old building in Manguinhos, Rio de Janeiro, a group of girls float silently across the wooden floor.

A teacher shifts between them, barking instructions. “One and two and three and close!” she shouts, pushing one dancer’s back straight as the others whirl, pirouette and plié in rows. “Four and plié and five and arabesque!” She corrects one girl’s calf and knee. “Port de Bras… elevé!”

Outside of these walls, Brazil is home to one of the world’s most unequal societies. According to Oxfam, the country’s richest 5 per cent have the same income as the remaining 95. Likewise, Brazil’s six richest men have the same wealth as the poorest 50 per cent of the population – which totals around 100 million people.

Nowhere is this kind of disparity more visible than in Rio. Around a quarter of the city’s near-seven million inhabitants live in favelas: shantytowns with ramshackle houses and winding alleys, where the sunlight doesn’t reach the ground. Most of Rio’s favela residents are situated in its North Zone, a flat urban sprawl featuring hundreds of different shantytowns. In here lies Manguinhos: one mammoth neighbourhood made up of multiple complexes that have since become indistinguishable. For many here, violence is part of the daily fabric of life.

But, around eight years ago, on one of Manguinhos’ main streets, something happened: a ballet school opened.

‘Ballet Manguinhos’ was founded by Daiana Ferreira de Oliveira, a 31-year-old local resident. Formerly a teacher for the South Zone rich, she started giving lessons for free in Manguinhos from a Baptist church. For Daiana – who, as a kid, first learned to dance in a disused printing plant – it was the injustice she saw everywhere that inspired her to start the school. After long days spent giving lessons to the children of wealthy families, she would return home to Manguinhos, only to see young girls from her neighbourhood roaming around the alleys in the evenings, with nothing to do.

In 2014, the school began operating out of a state-subsidised library in the favela. But two years later, amid the fallout following the 2016 Olympics, officials in Rio oversaw the widespread closure of government-run initiatives – including the library. In response, Daiana waited for just a few days, before returning with the children and a sympathetic locksmith. They cracked the lock, broke back in and became, for more than a year, the only occupied ballet school in the world. (Probably.)

Today, Daiana teaches out of a different building: a former drug rehabilitation centre comprising four floors, situated on the edge of the favela. When she first started, she taught just six ballerinas; today, however, there are 250 girls in her class and 400 on the waiting list. One of Daiana’s teachers studied at the Bolshoi Theatre; Claudia Mota, the Prima Ballerina of Brazil’s most important ballet, is the school’s patron. Now the school almost serves as a town square: the girls dance while their parents watch on, laughing and joking. “We can’t save Rio – or Manguinhos,” says Daiana. “All we can do is distance ourselves.”

1. Manguinhos is a complex of at least 17 favelas grown together. With shacks everywhere – many built on top of one another – the streetscape is uniform. Conflict, meanwhile, is the norm: police raids and gang clashes contribute to a culture of violence that’s can often feel difficult to escape. 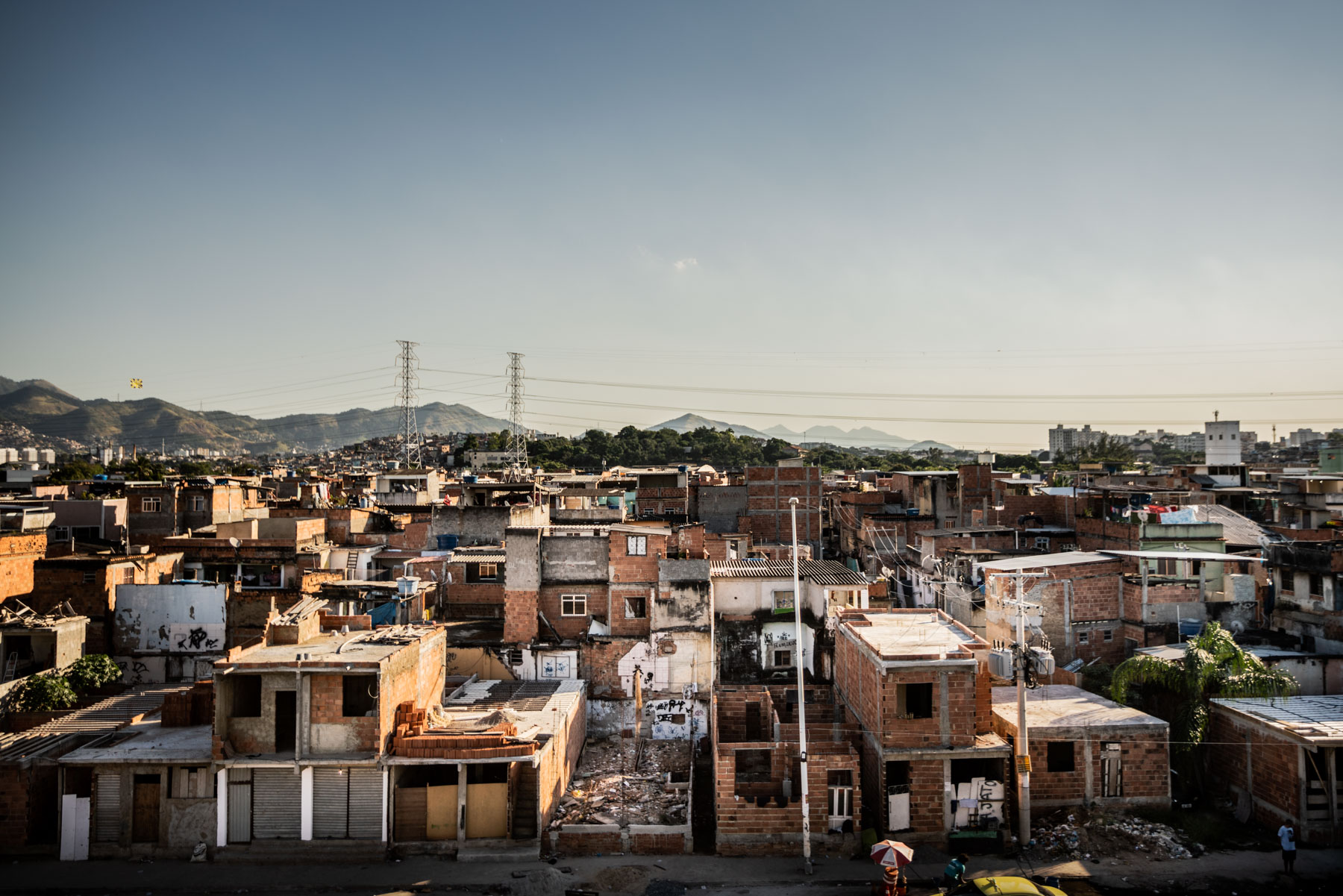 2. Daiana grew up here in what she calls a “typical favela family” – but her mother was always adamant her children should expose themselves to culture outside of Manguinhos. She was just seven years old when the family first visited the Theatro Municipal, an opera house home to Brazil’s most prestigious ballet, having secured cheap tickets. They began queuing at 7am for the performance: Pyotr Tchaikovsky’s ‘Swan Lake’. Daiana was so inspired by the experience that she still teaches the Russian method today. 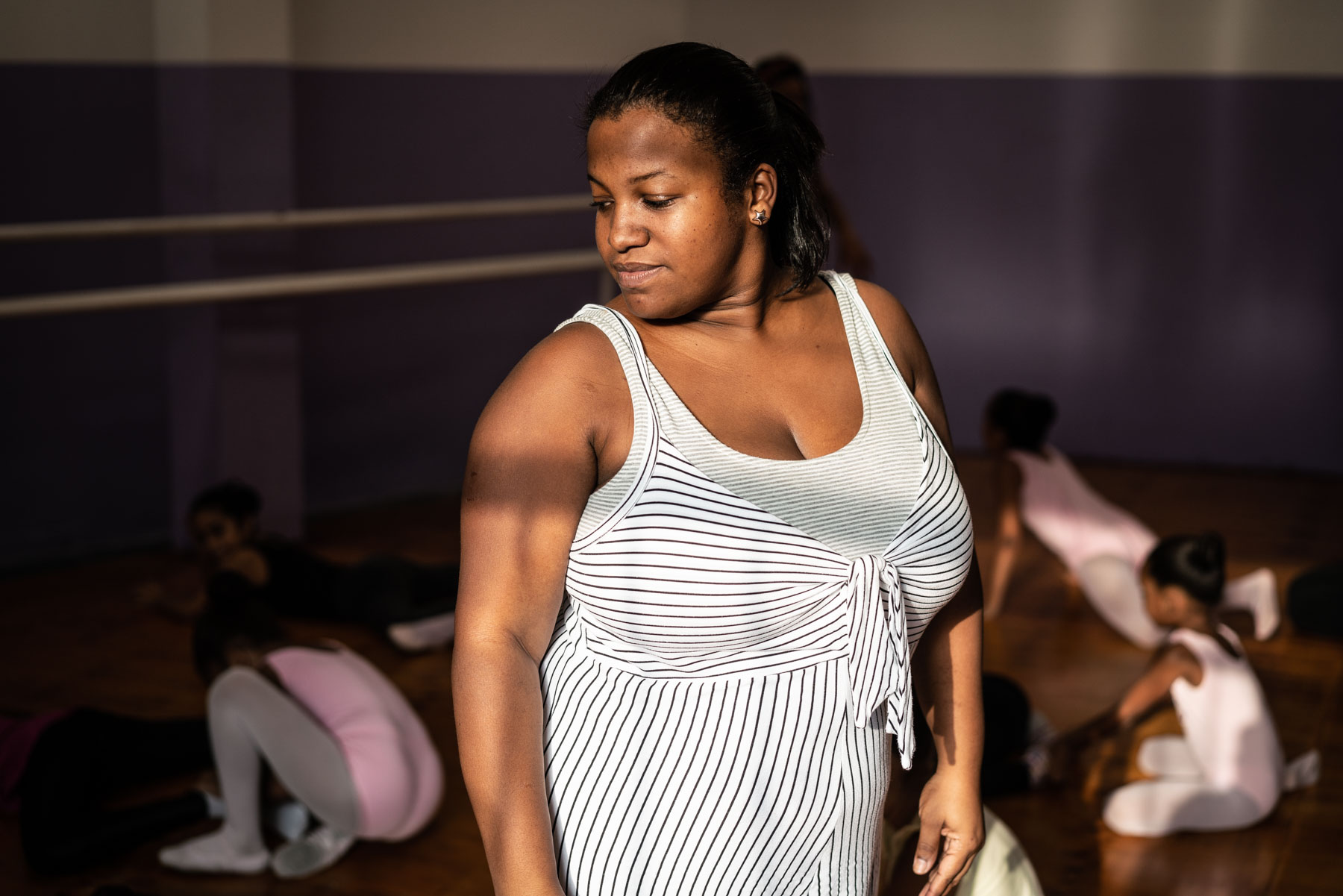 3. Maysa Barbosa Aben-Athar is one of Daiana’s pupils. Her journey to the ballet school includes a long walk along Rua Leopoldo Bulhões, Manguinhos’ main street, known locally as the ‘Gaza Strip’ due to its history of violence. “We had to throw ourselves in the dirt here,” says Maysa, referring to a messy stretch of road. “Because of a shooting.” 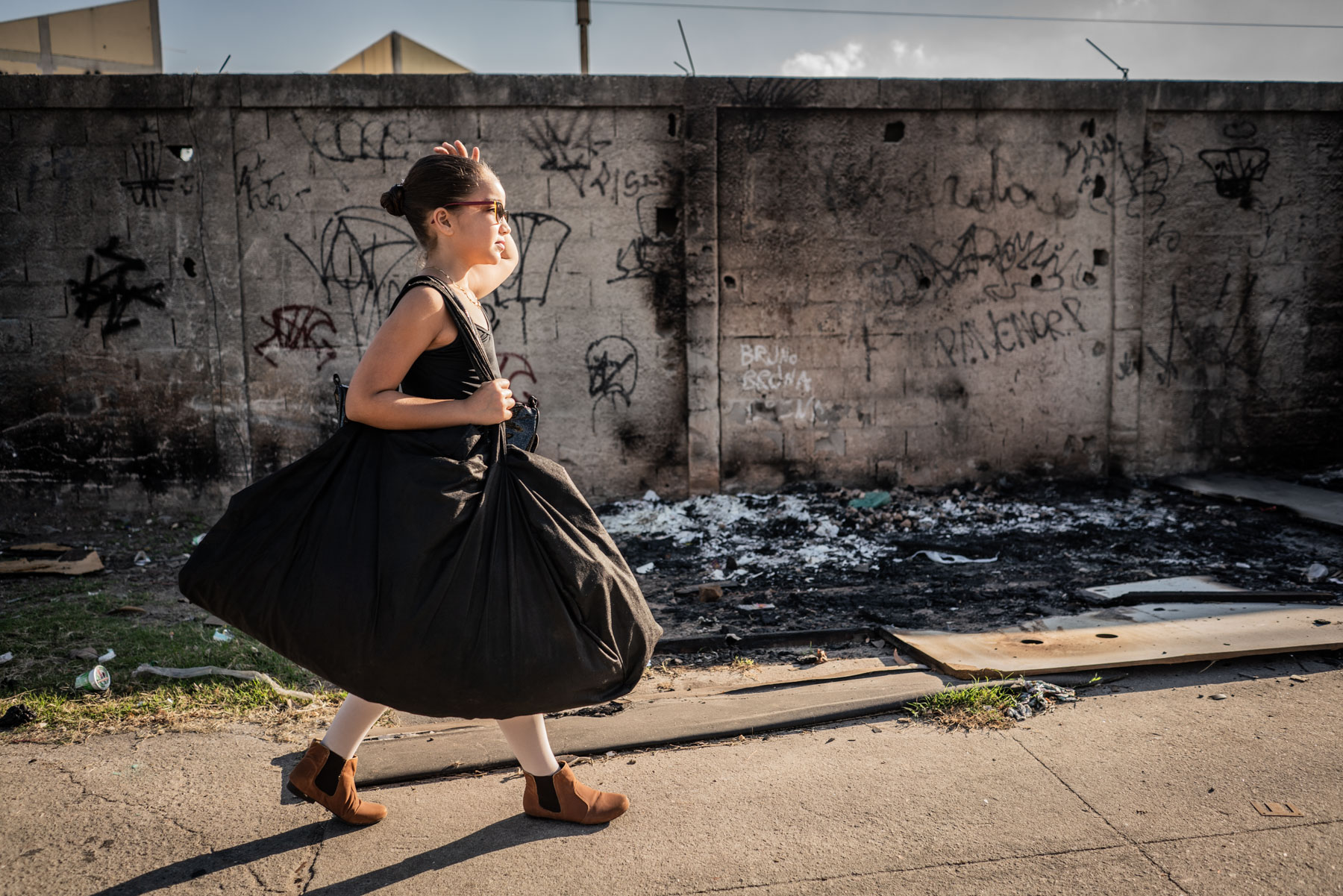 4. Maysa is 11 and part of the ‘Companhia dos Jovens’– a select group featuring the most accomplished dancers in her age bracket. Even in the school’s elite groups, she is one of the best. Her gold tutu, which she keeps under the bed she shares with her two sisters, is her prized possession: it cost 2,000 Brazilian Reais – around £330 – which is more than her mother makes in a month as a cleaner. 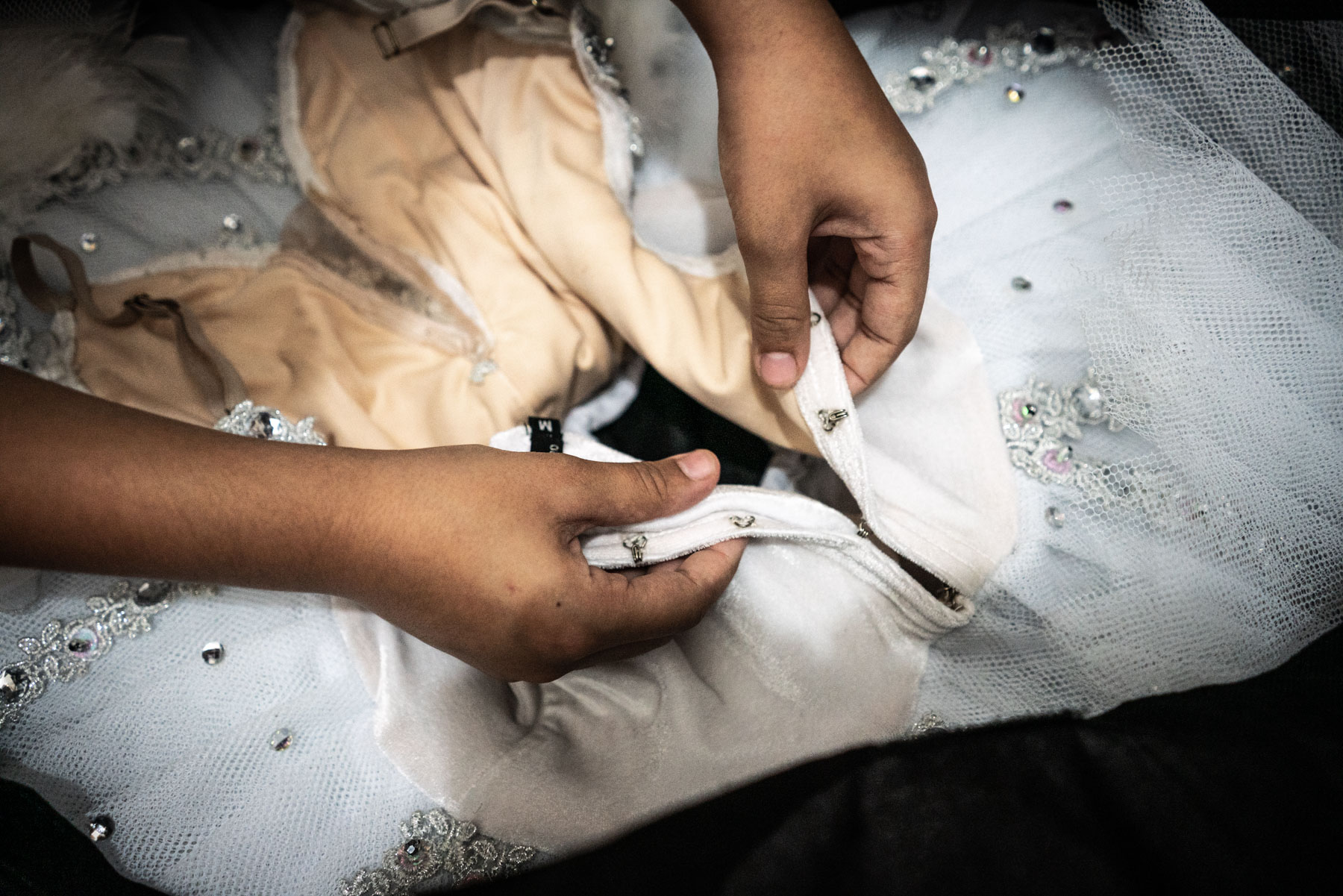 5. With the school, Daiana has tried to create a philosophy based around discipline. Being late to class is not tolerated, nor is deviation from the strict dress codes. “We do not give the kids time to breathe,” she says. “I mean that in a positive way.” 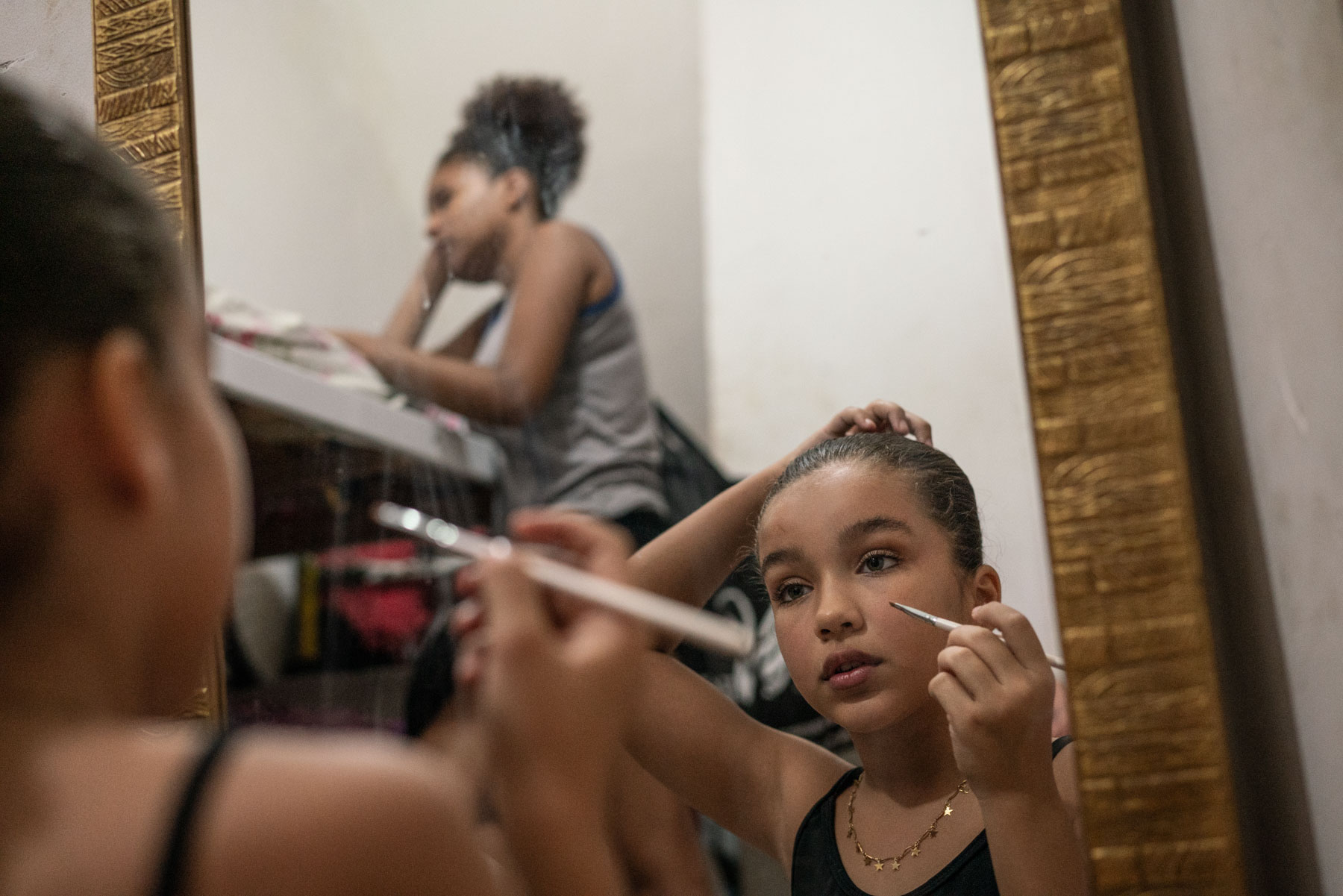 6. Today, the school is surviving. But further cuts to favela-based projects – particularly cultural ones – mean that its long-term future remains uncertain. For as long as far-right president Jair Bolsanaro is in power, the risk of further decimation is high. 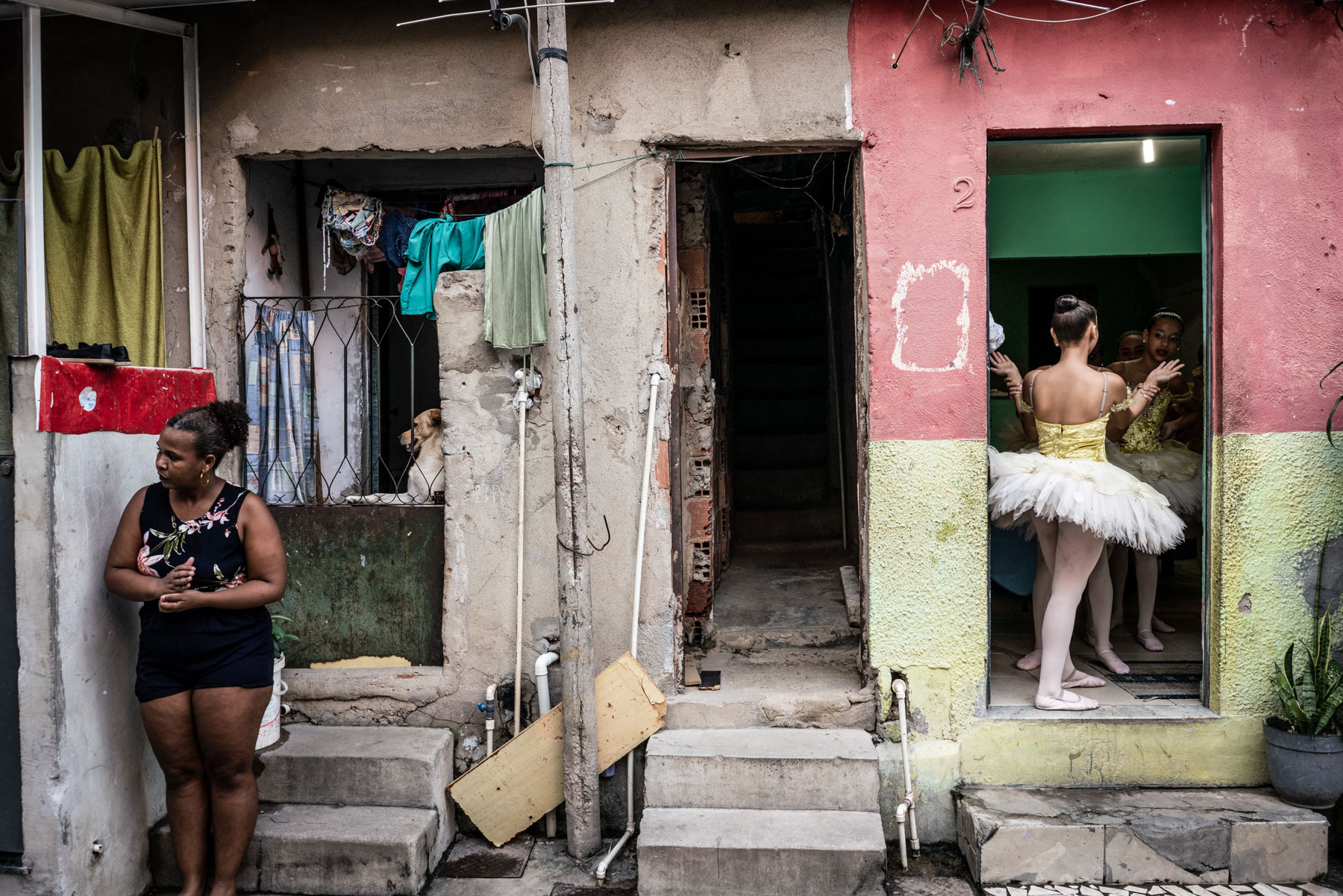 7. Ballet Manguinhos has allowed its students to experience things their peers could not. In 2018, they travelled by night bus to perform at a Winter Festival in the city of Ouro Preto; later some of the girls, including Maysa, flew to São Paulo for another show. People from all over Rio come to see them when they perform outside of the favela. While most of the girls will go on to do other things outside of ballet, what stays with them is discipline, strength and self- confidence – values Daiana believes equip them with the best chance of a better life. 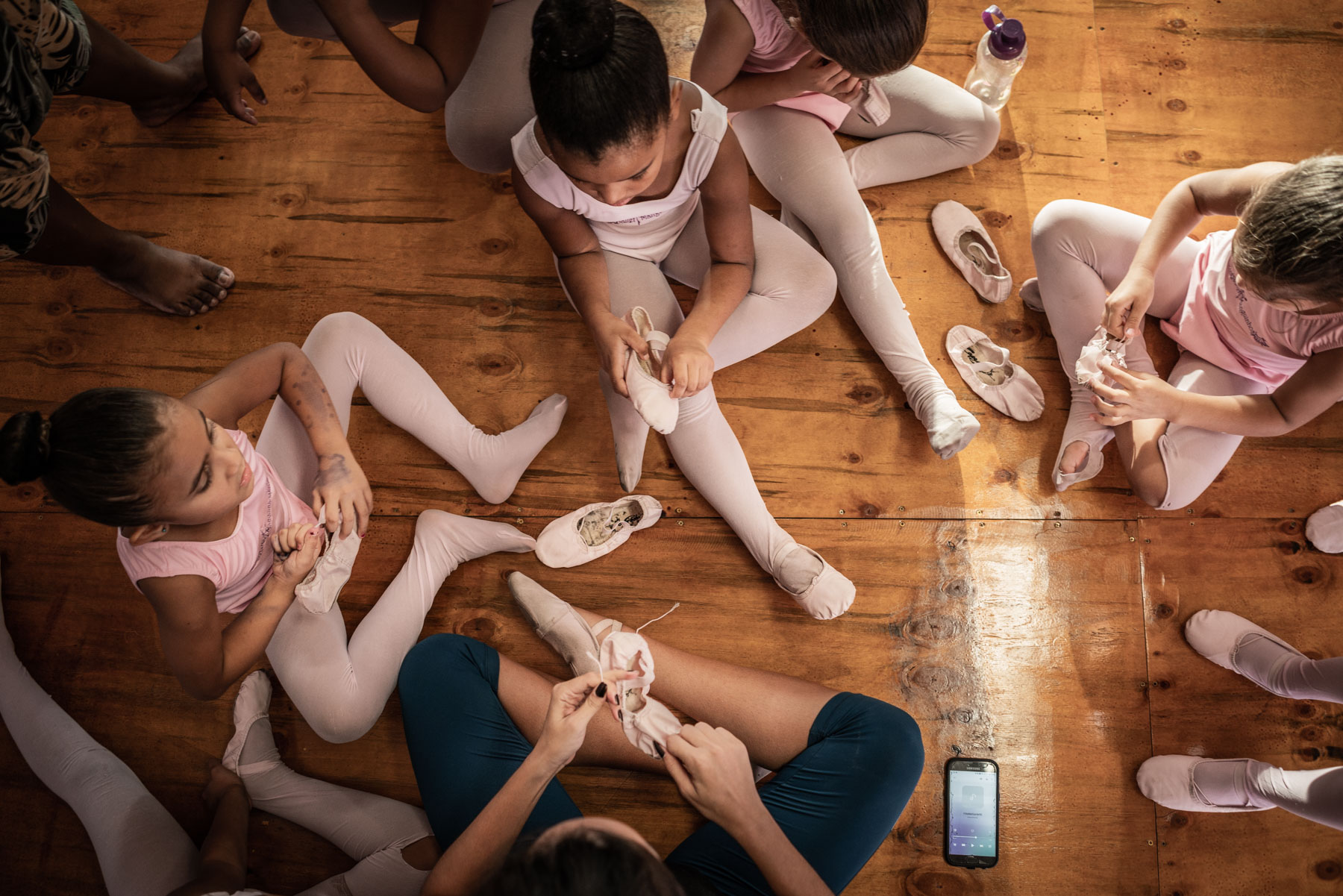 8. At first glance, the school’s set-up feels highly professional. But upon closer viewing, much turns out to be improvised: the doors were donated by the church, the mats are from a Jiu-Jitsu school, while the laminate floors were given to Daiana by a hardware store. The toilet paper they use is brought in by the students’ parents. “We live from favours,” says Daiana. “We are on life support.” 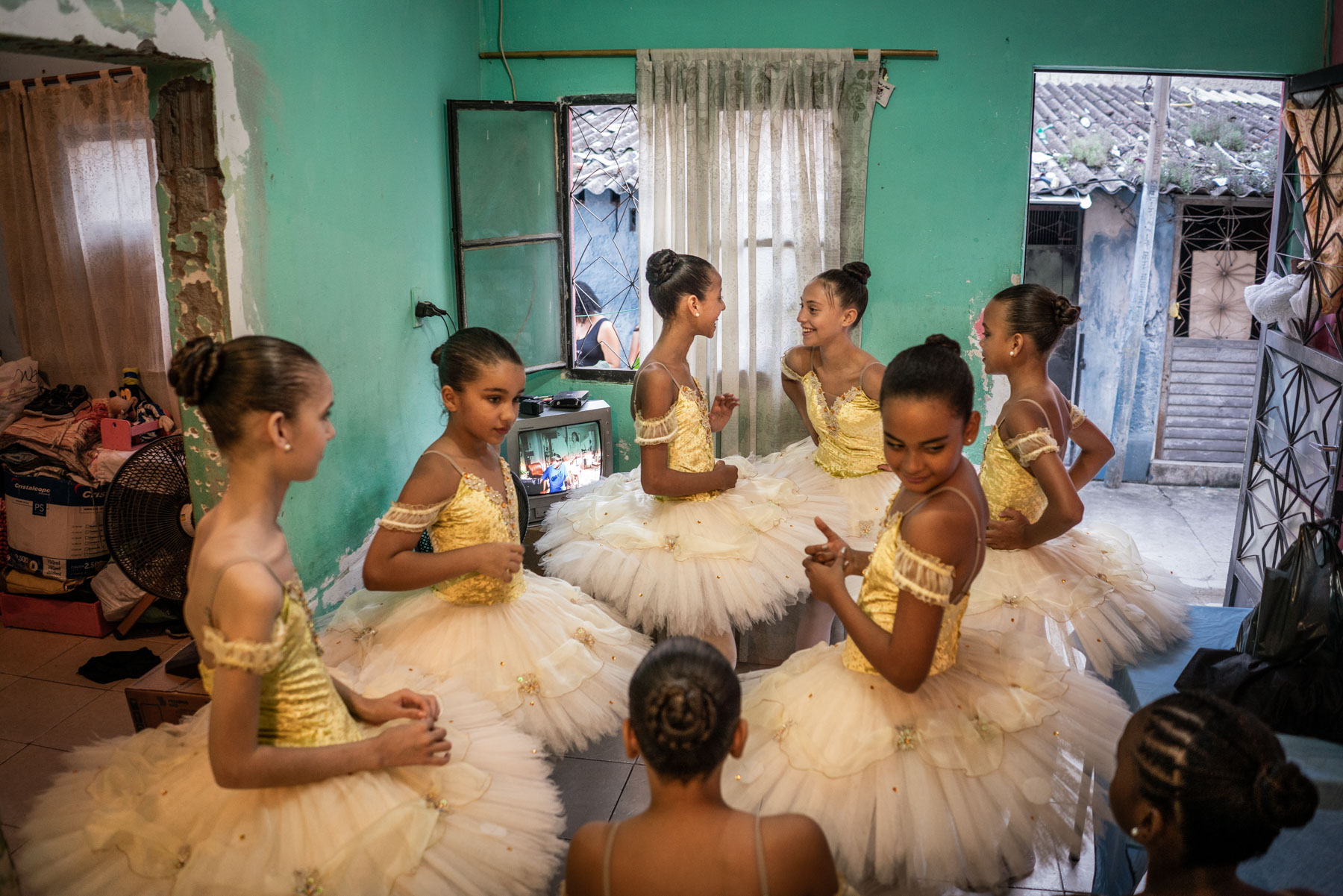 9. The ballerinas are well known in Manguinhos. Bystanders will take pictures; sometimes, locals will greet them with exaggerated ballet poses. If Daiana is with them, she will be stopped too – people asking whether the school has space for their daughters, nieces or granddaughters. 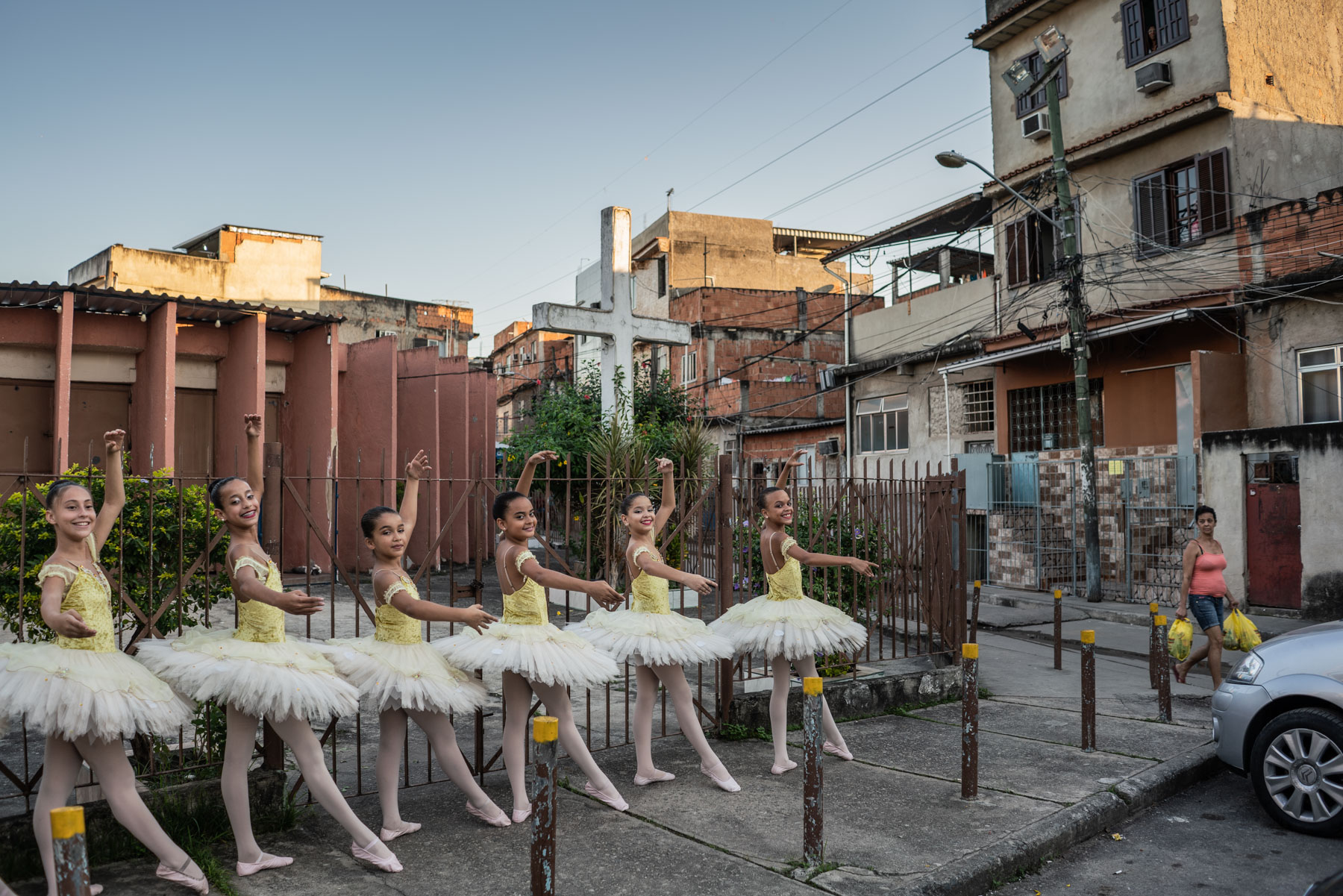 10. For anyone that wants to try and forge a career in dance, the challenges are clear – regardless of who they are, or where they are in the world. But two ballerinas from Manguinhos have successfully completed the admission exam at the dance conservatory of the Theatro Municipal. Maysa, as one of Ballet Manguinhos’ brightest sparks, plans to take it in 2022. Ask her what she wants to do when she’s older and her response is clear. “Dance. But not as a teacher. As a dancer – in a big ballet!” 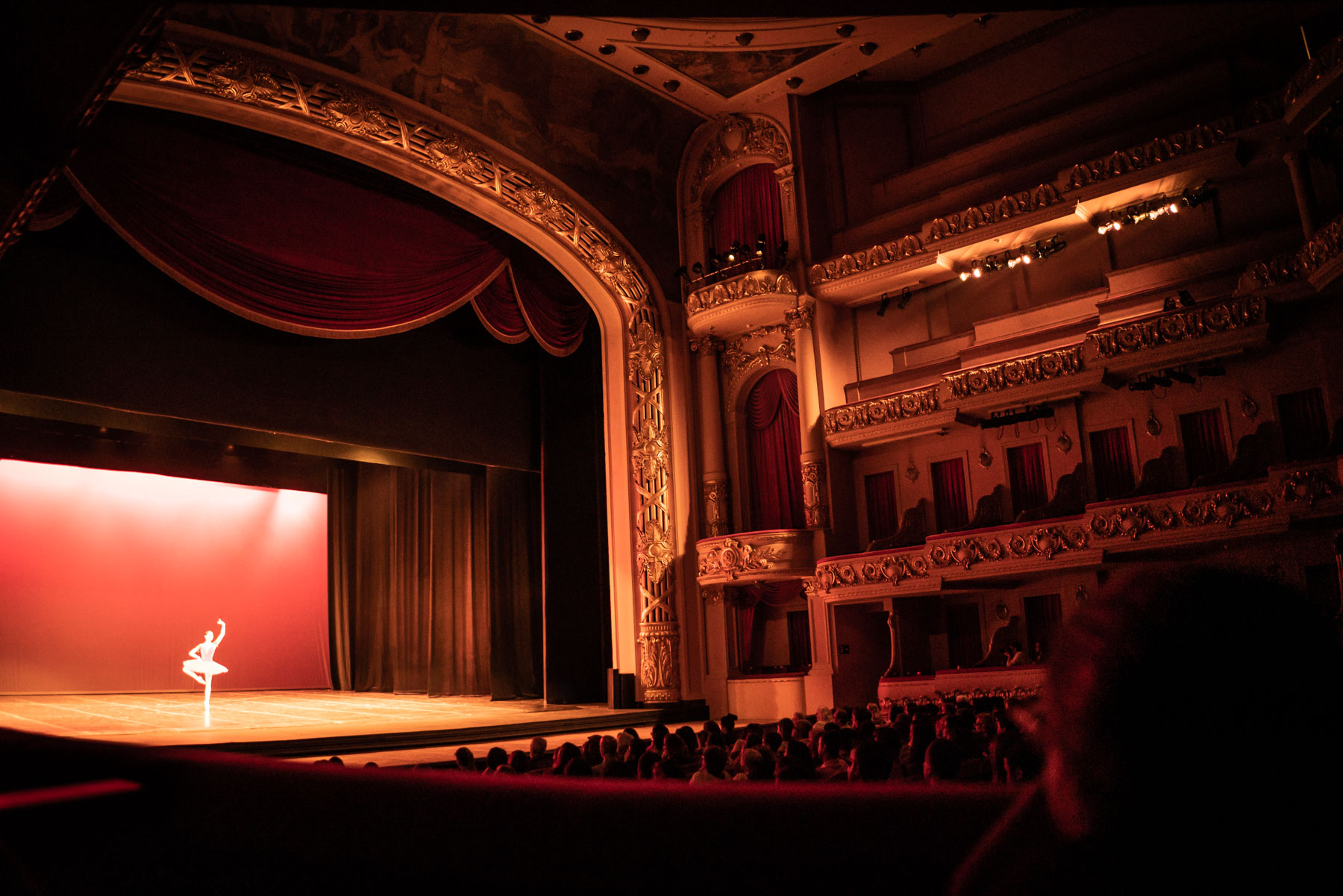 Linkedin
RELATED ARTICLES
OTHER ARTICLES
Since 2007, Gideon Mendel has made 20 trips to document floods in 13 countries. The result is an alarming record of what has already been lost to the climate emergency.
Social prescribing connects people with non-medical support to improve their health and wellbeing – but some experts worry it’s just a stick plaster solution.
Following the release of his debut single, Deyaz talks battling addiction, dealing with his struggles through music, and building a budding music career from his living room.
As she gears up for the release of her first book, the 24-year-old climate activist talks standing up to authority and building a more inclusive movement.
After blocking the Scottish government’s gender recognition reform bill, Westminster is now devising further changes to the law to make it harder for trans people to self-identify.
Tristan O’Neill’s shots of dancers caught in moments of reverie at the height of rave’s golden age are a testament to the UK’s legendary club culture.