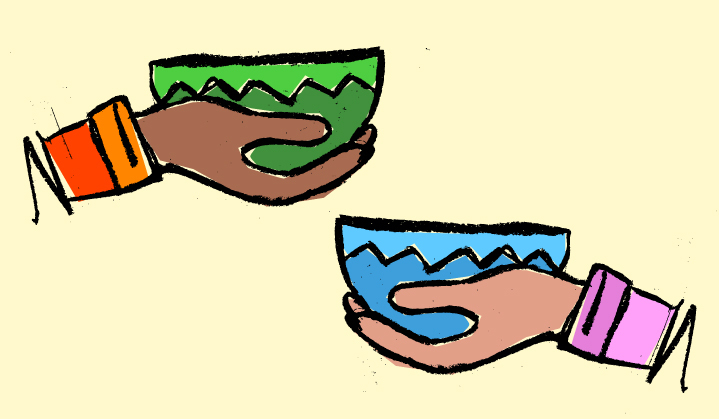 The coronavirus pandemic has seen millions of people going hungry. In response, activists are stepping up where the government is failing.

The coronavirus pandemic has seen a record demand for UK food banks, with millions of people going hungry due to the financial implications of lockdown. In response, activists are stepping up where the government is failing – advocating for a National Food Service to solve the crisis.

Food insecurity is not a new issue. For the past decade, austerity has squeezed the UK dry, leaving local councils depleted and desperate. Last year, as the country tumbled towards an unforgettable December election, the statistics were stark: more than 8 million people live in food poverty in the UK.

However, it has taken the coronavirus pandemic to bring it home for many. Owing to the financial repercussions of the global health crisis – a predicted 7.6 million UK jobs are at risk – those who previously thought they were safe are now vulnerable. As a result, food banks are currently receiving record demand: within weeks of the lockdown, it was revealed that 3 million UK citizens were going hungry, while recent data from the Food Foundation found that almost a fifth of households with children have been unable to access enough food since restrictions were put in place.

Jeanette Bailey is a single parent self-isolating in Sheffield with her two children, who are 12 and 16 years old. “My son typically has three school dinners a week, paid for by his dad using parent pay, and my daughter at college gets a daily £3 pass,” she says. “I wouldn’t typically have to pay for this, but now I am. And I am not receiving school vouchers”.

Bailey’s situation is far from unique. As schools have been unable to provide free breakfast clubs and lunches, many families are under increased financial strain. While the government is providing emergency provisions, only a limited demographic are eligible: those in the most high-risk health category, who are without a network of family and friends.

As more and more people are pushed into food insecurity, people are having to turn to community-led organisations, rather than the state, to help. Foodhall in Sheffield typically operates as a contribute-what-you-can dining hall. Today, though, its canteen is mobilised with volunteers packing up food parcels and rustling up pre-made meals. Jeanette heard about their Covid-19 response through Facebook and contacted their hotline. She was able to receive emergency food provision from them while waiting for the £20 uplift on her universal credit benefit. “The food delivered was gorgeous – mashed potatoes, soup and bread and butter pudding,” she says.

We’re supporting people through access to food, but our helpline is also a valuable point of contact if you’re struggling. Give us a call and mention “wellbeing” and one of our team will call you back as soon as we can ❤️ pic.twitter.com/scMF7p7ng6

These community initiatives are running all over the country. In Bristol, for instance, Coexist Community Kitchen – which usually serves as a non-profit cookery school for marginalised communities – is working with local charities to deliver food to those in need. As these kinds of organisations are independent – not run from the top-down – they’ve been quick to react and adapt. For Marsha Smith, who helps coordinate the response to Covid-19 on behalf of Nottingham’s social eating spaces, it’s because they’ve already fostered a network of trust and resilience. “As these hubs know their local community, they knew who was elderly, immunocompromised and who to reach out to,” she explains.

But for many of the organisations delivering emergency food provision, there is a surreal feeling that they’re doing the government’s work, without the appropriate government support. Foodhall has been inundated with phone calls, many of which they say have been directed to them by the council. While supermarkets have witnessed a £3bn bailout from the government, emergency food provision has only seen crumbs in comparison. “The central government’s support for emergency food aid during the crisis has been painfully slow and insufficient. Many organisations have been demobilised by a double swing; a lack of immediate financial help and sharply rising demand”, says Louis Pohl, Foodhall’s Director.

Due to the dizzying need for emergency food provision, many organisations have had to scale-up – such as The Magic Hat Café in Newcastle. Since teaming up with Fare Share and Food Cycle, two organisations which redistribute food surplus, the café, which typically fights food waste, has delivered over 20 tonnes of food to those in need. “Our operation was meant to be stock up till the council took the reins on it”, says co-founder Jess Miller. “We’ve struggled to keep up… the local council have just started to offer small grants, but that’s only to procure food – not to pay for anything else.”

“All of these incredible groups are doing what they’re doing because they’re from and attached to those communities”, she continues. However, she feels like the government is taking advantage of their attachment to the people that they’re helping. “I feel like they know we will do the work, whatever the cost.”

Another big day in the warehouse yesterday, preparing 200+ food parcels, thanks team! Another 200+ parcels to do today!

To support our project please share our posts and/or visit: https://t.co/AQ10KypJ2l pic.twitter.com/YrYEsjrxxO

The crisis currently unfolding currently only seems to be the beginning. Since lockdown began, the number of people on universal credit has increased by 40 per cent. Future predictions are particularly bleak, with the Bank of England warning that the UK will face a historic recession. With this in mind, activists argue that the government’s previous tactics of dealing with the food crisis will not be enough: while food banks are viable for those in immediate distress, they’re not there to feed thousands thrown into insecurity by sweeping societal changes. “People need much more than the passive receipt of a free benefit,” Smith says.

Alongside several like-minded branches, the likes of Smith and Pohl are arguing in favour of the implementation of a National Food Service: a mass re-introduction of affordable public eating spaces that are government-supported and community-run. “Putting shared food, shared resources and public space back into the heart of communities does an awful lot more than just feed people,” Smith says. “Food is a human right,” adds Louis. “The expense of losing lives due to food insecurity is much higher than the cost of supporting emergency food aid.”

As recently as the World Wars, state-subsidised ‘national restaurants’ were a common fixture in Britain. Dr Bryce Evans, an Associate Professor at Liverpool Hope University, writes in his research blog that they began as “voluntary projects within working-class communities to combat wartime supply disruption and inflation”. By 1918, it was believed that these restaurants would become a permanent national fixture. But they were soon dismantled due to opposition by the restaurant movement, as well as “penny-pinching local authorities”.

In modern times, public spaces have slowly disappeared altogether, replaced by privatised and segregated places that have become increasingly unequal and unaffordable. “A neoliberal economy based upon transaction and whether you’re able to pay for something is alienating for all humans,” Smith says. While she advocates that food should have a value, she believes it must be cheap and you should be able to pay for it with other means, besides just coins. For instance, Bristol’s Coexist Community Kitchen organises a community lunch on a Thursday night where those that cannot offer monetary donations give back next week by volunteering. By allowing members to contribute in this way, the hierarchical relationship you so often see between seller and customer is removed.

Our response to COVID-19
We are switching our service into en EMERGENCY kitchen to cook food for the most vulnerable. #InThisTogether pic.twitter.com/xZ5NbAUP9s

People don’t just need to eat; they need to eat together. Why? Because enjoying meals on mass is known to build connections. Human language was born around a campfire. Thanks to a lack of open access, social isolation is something that predates coronavirus: before the pandemic, almost a fifth of the UK population described themselves as lonely. Two-fifths of older adults say that television is their main company. When you help someone who doesn’t have access to food, you’re also likely to be helping someone who struggles with social isolation.

Shah Hussain and her daughter live with severe anxiety. Unable to work, Shah relies on universal credit. However, after bills and debt, she only has £100 a month for food. “We can’t go for luxury food,” she says. “Ramadan helped us because we had to fast.”

Shah has received some school vouchers, but shopping under the current conditions – the masks, the gloves, the aggressive stares – is difficult. “My daughter and I were already struggling. On top of this, we’ve had to face lockdown”, she explains. But with the help of support workers, she was able to reach out for help and “received three food packages, all in one go” – including one from Foodhall. “My daughter and I [said], ‘Look, there are kind people out there.’”

Although people may now be alone, if they are connected to one of these projects, these ties are invaluable. Currently, thousands of UK residents are experiencing the power of community food provision. When society eventually reorganises itself in a post-pandemic landscape, it’s clear that food insecurity will be as prevalent as ever. A huge collective will be required.

“I am hoping, post-pandemic, people are going to want to come out together and we need to engage these new audiences,” Marsha says. “We need to stop expecting that the government will save us because it’s not going to happen. What we need is regional networks and social movements that come from the ground up.”

Linkedin
RELATED ARTICLES
OTHER ARTICLES
Last week, Tower Hamlets council removed its nudity-restricting licensing conditions in a huge win for London’s kink community.
Danny Burrows discusses his new series of images documenting an pacifist anabaptist community who lead an alternative way of life.
One year on from the fall of Afghanistan to the Taliban, Tiara Ataii speaks to those who have been forced to make the treacherous journey to Europe for safety, and the barriers and horrors they have faced.
A 28-year-old from Texas was forced to travel across state lines for an abortion that would save her life and end a pregnancy that her baby had no way of surviving.
From the early originators to the female writers at the forefront of today’s scene, we talk to the artists redefining graffiti’s consciously macho origins.
Steel City is often overlooked when it comes to the country's cultural radar despite its role in shaping electronic music.