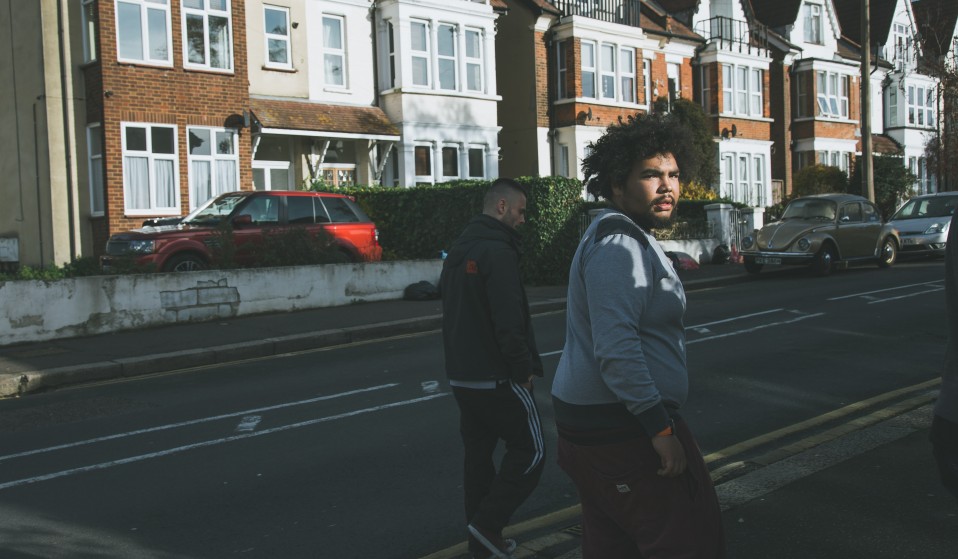 Spice, a dangerous and highly addictive variety of synthetic cannabis, has grown to become one of the biggest challenges for young homeless people. And a government ban this Summer could have made things worse.

Spice, a dangerous and highly addictive variety of synthetic cannabis, has grown to become one of the biggest challenges for young homeless people. And a government ban this Summer could have made things worse.

Inside an anonymous looking white semi-detached Victorian house on the outskirts of Southend, on the south coast of England, a group of young men are trying to put their lives back together.

For growing numbers, Spice is a major factor in why people end up here. Until they found local homelessness charity HARP’s Restart programme, both Lewis, 19, and Chris, 20, were on the streets, and addiction to Spice was sending them on an escalating downward spiral.

“[When I first smoked Spice] outside college, I thought ‘What’s this? I’ve got to have more,'” Lewis says. “I went to the shop later that day to buy more and from there I started to lose everything: my relationship, family members, education…”

He pauses, and hangs his head in his hands.

“With weed and other drugs, I’ve never felt anything close to Spice. I just had to have more.” 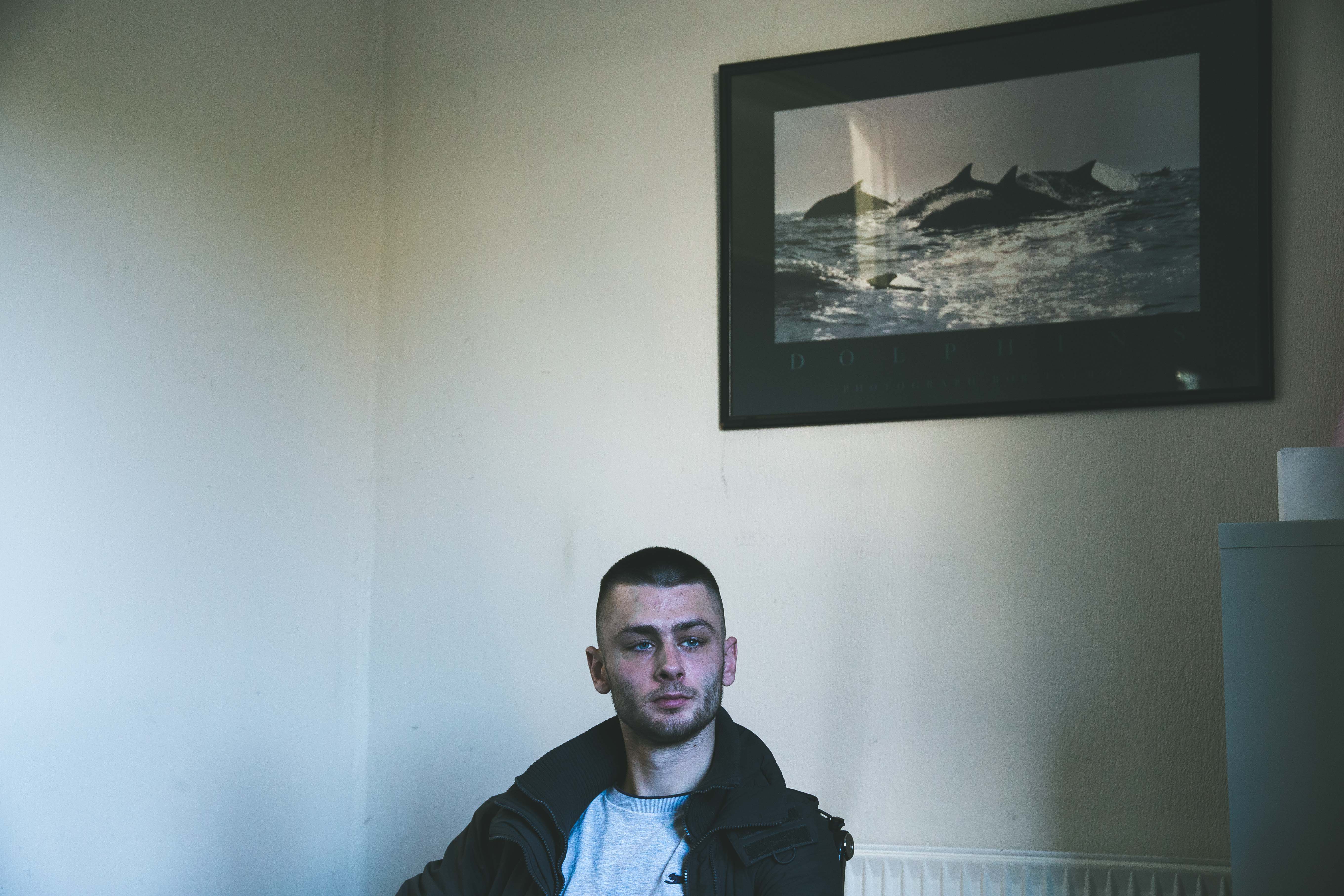 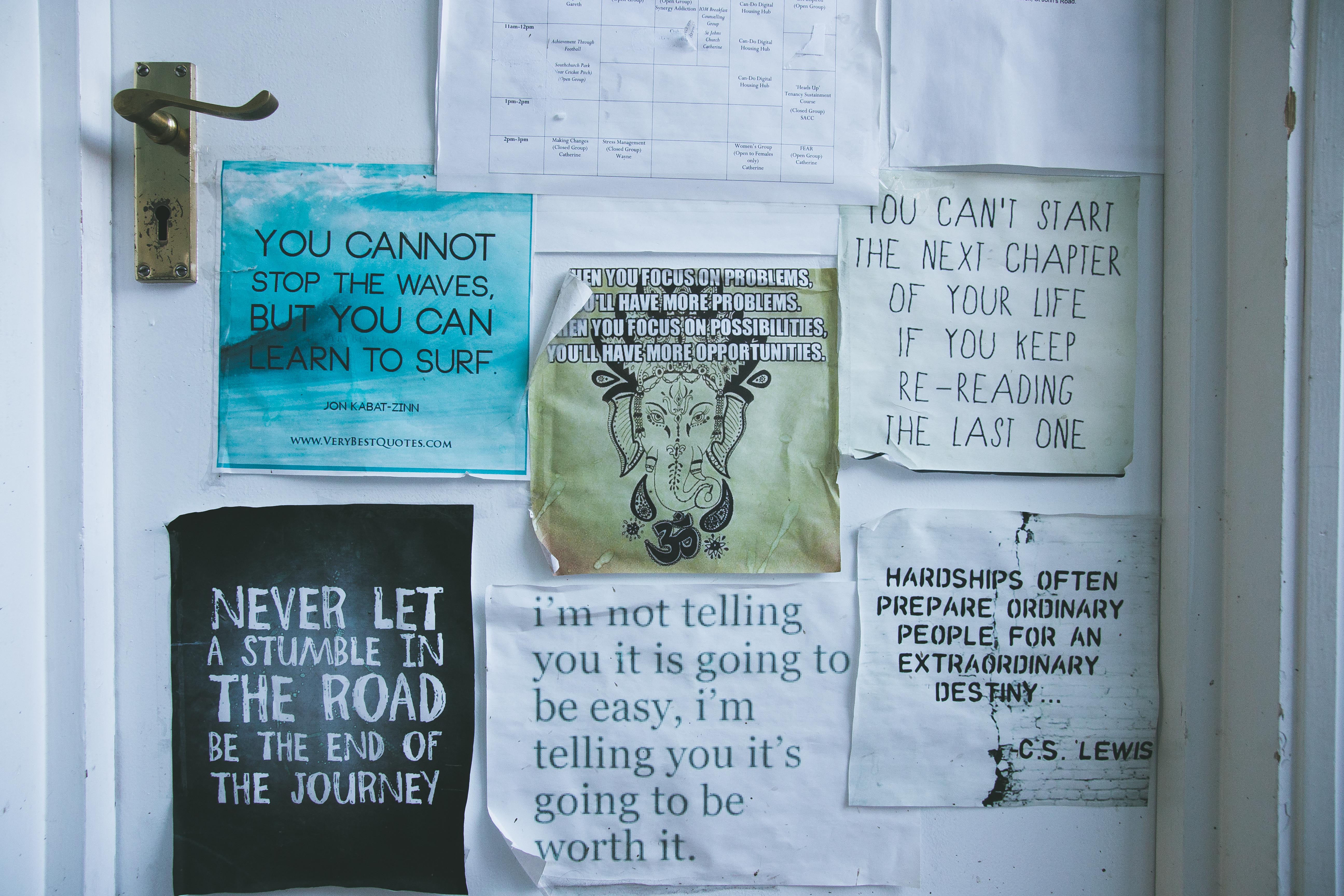 Spice is a variety of synthetic cannabis that has proven to be far more dangerous and addictive than herbal cannabis – responsible for multiple deaths and thousands of hospitalisations in the last year alone. Until the government’s New Psychoactive Substances bill or ‘legal highs ban’ came into effect in May 2016, it was sold over the counter at head shops, providing a cheap and legal alternative to cannabis.

But Spice addiction is a growing epidemic among homeless people, and criminalisation appears to have done nothing to restrict access or soften the blow. No nationwide data exists for addiction rates among homeless people, but experts and support services report a significant increase is use. Andrew, a Substance Misuse Co-ordinator at HARP who works with Chris and Lewis, says it’s now a bigger problem for people under 23 than Crack and Heroin – but frustratingly little is known about its harmful effects or how to devise effective treatment strategies. 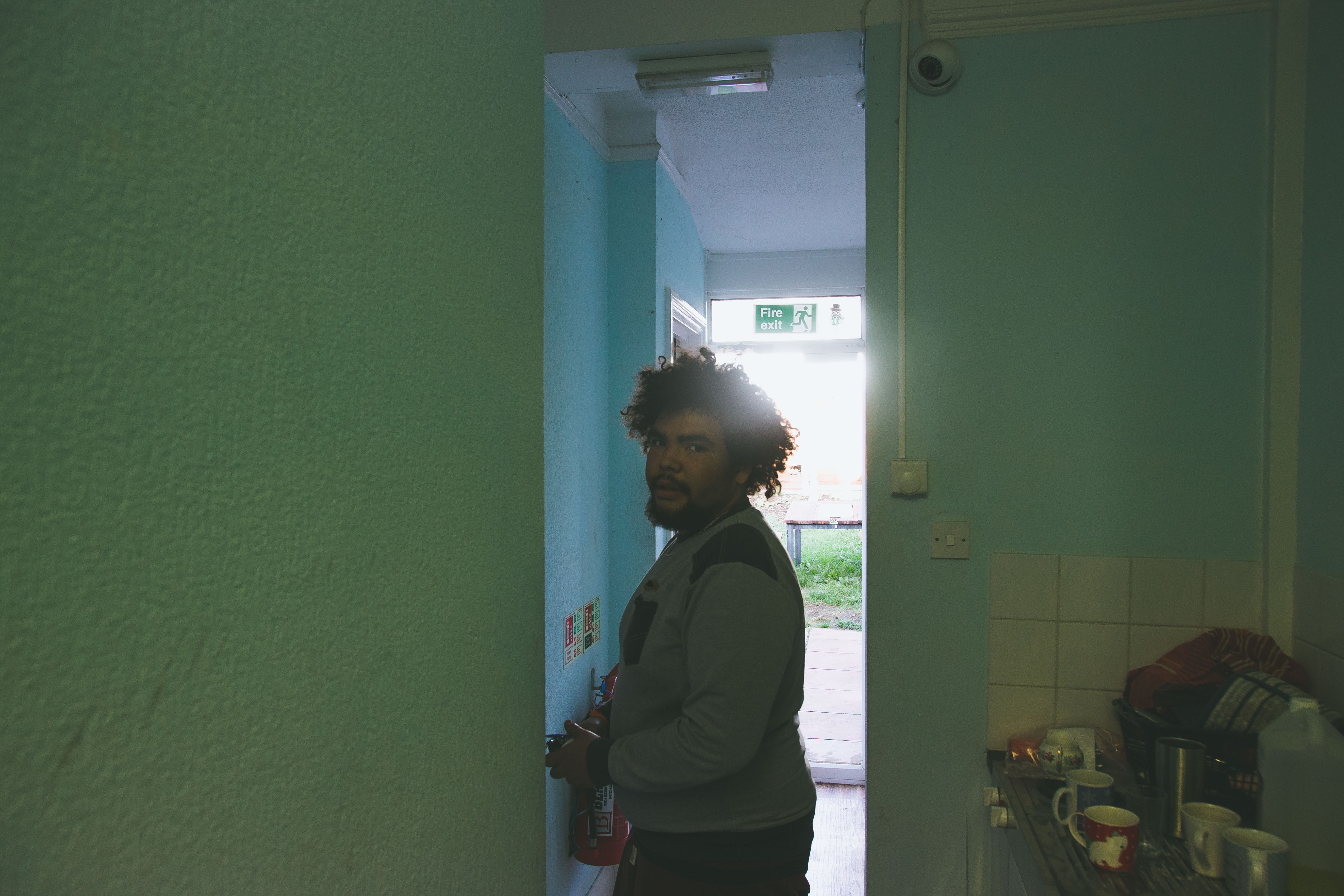 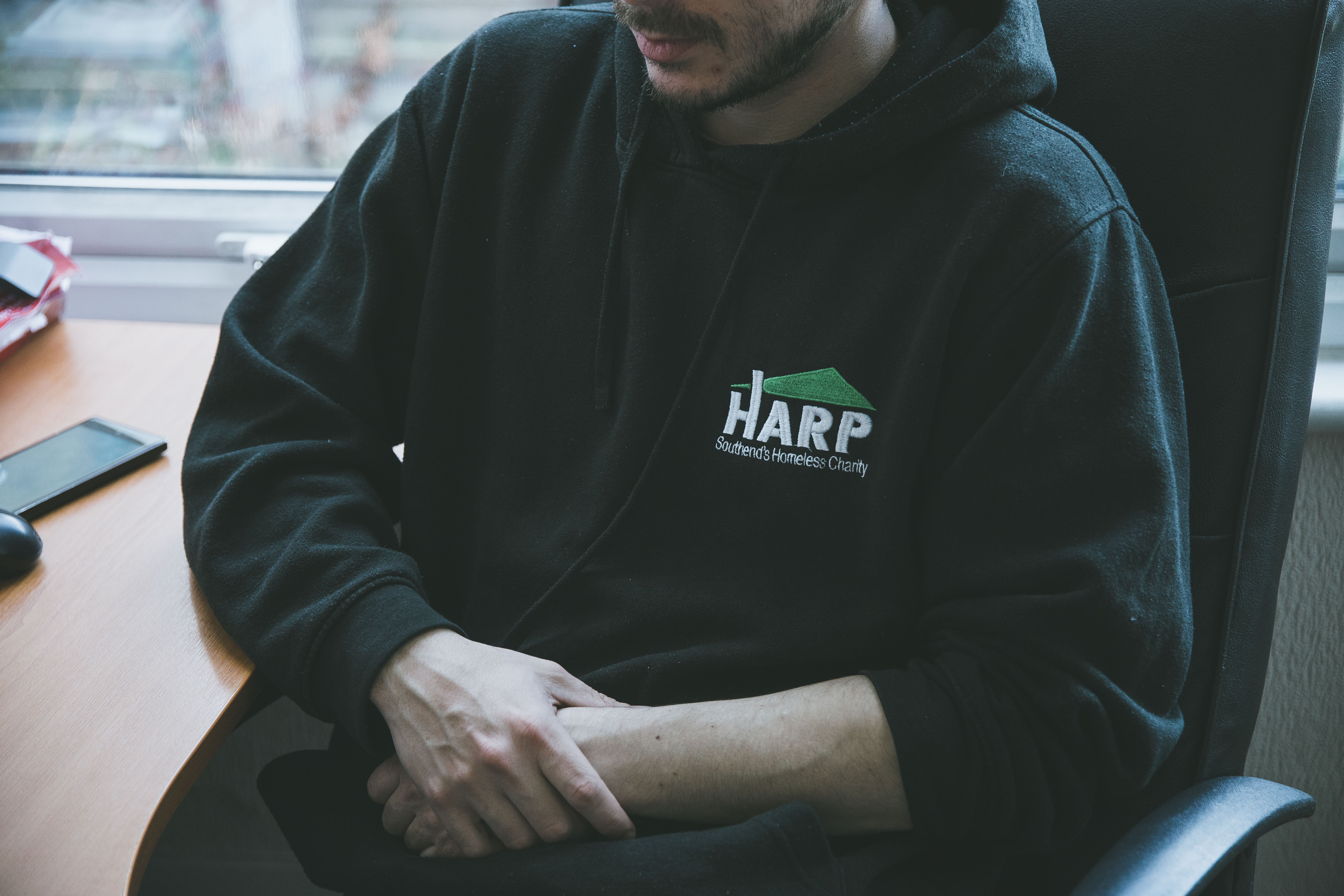 Sitting in HARP’s halfway house, Chris and Lewis are now in recovery but they’re eager to share their experiences of Spice in the hope that others avoid what they’re going through. Both explain to me that their need to get more of the drug at whatever cost put them on the streets. From that point on both of their usage went up dramatically as they struggled to deal with the pressures and insecurity of being homeless.

“When I was homeless I began smoking four grams a day,” Chris says. “Nearly all the homeless people I know were smoking. I would do anything to get it. Some people would go into town and steal things to give directly to their Spice dealer.”

Chris would start to feel withdrawal symptoms after an hour without smoking, that could include sickness, mood swings or shaking. But what shocked Chris and Lewis most were the psychological effects of smoking high quantities of Spice they saw was having on other homeless users.

“I’ve seen people turn into a dog, walk around on hands and knees barking,” Chris says. “Another guy thought he’d been turned into water. He was saying ‘Don’t move me or I’ll spill.’”

“I realised I had psychosis not long after I started smoking Spice,” Lewis explains. “Sometimes I would hear voices. That’s the reason I get sectioned for the first time, I heard voices and I went to jump off Victoria car park building. I don’t know why I did it, it wasn’t me.” 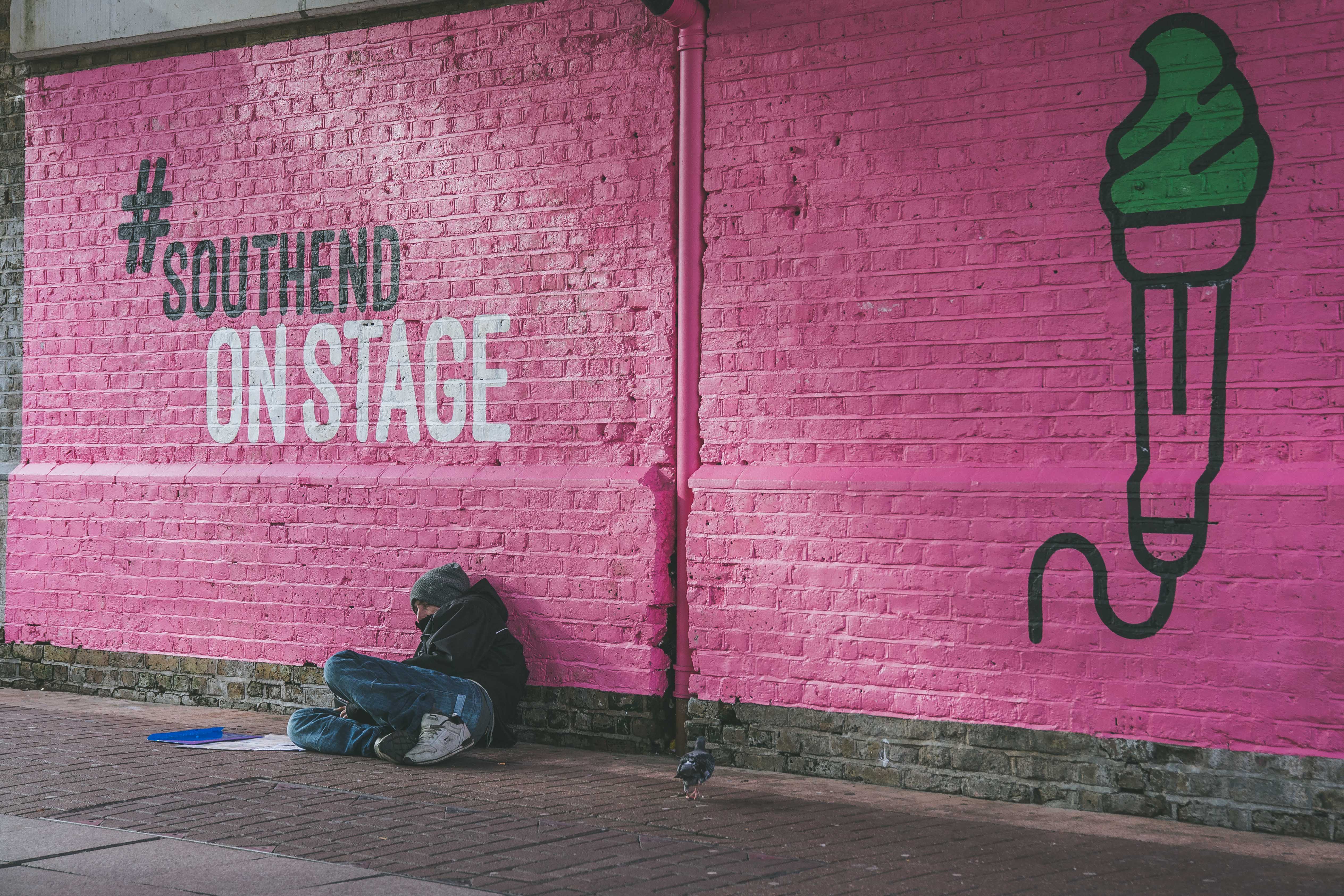 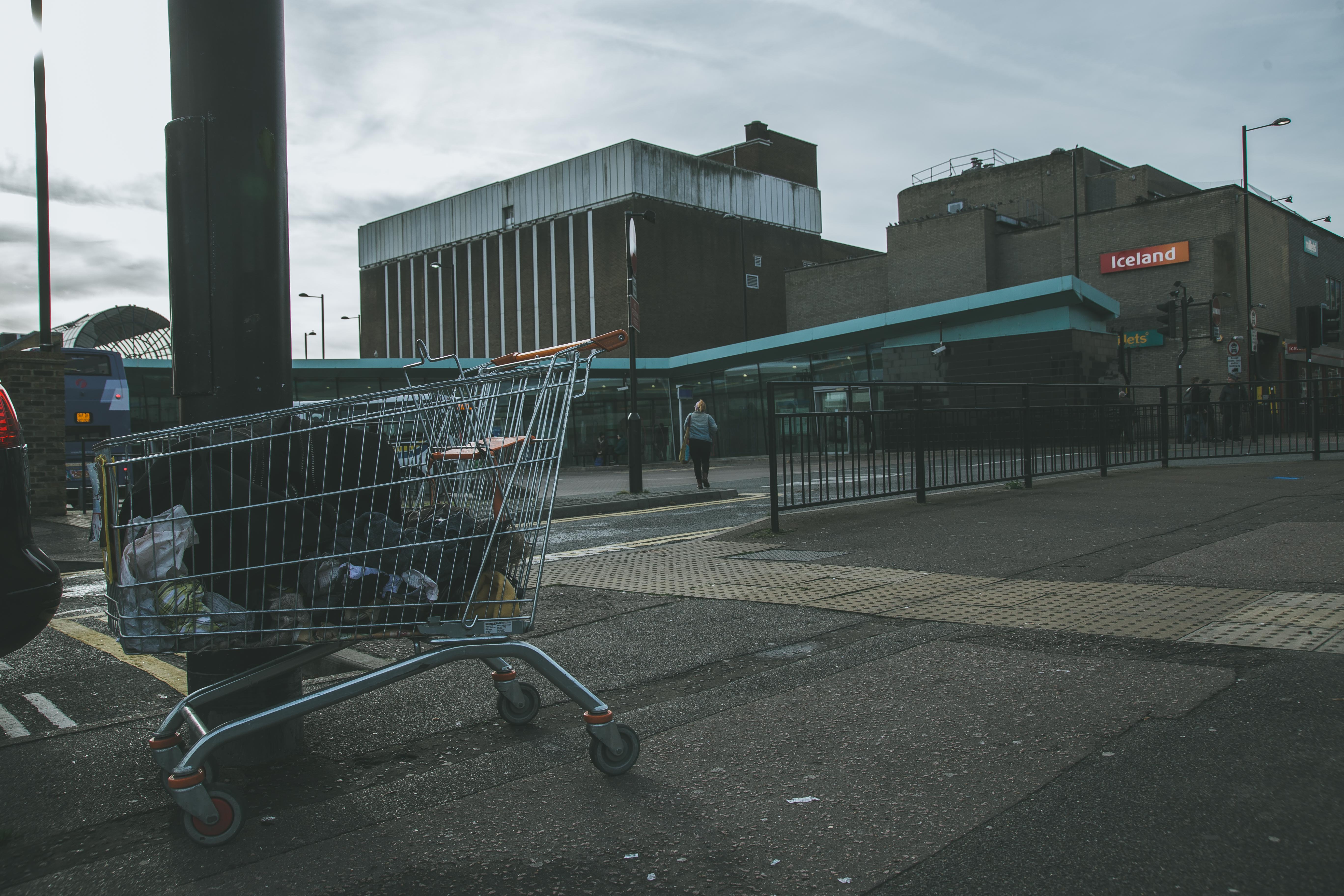 Despite a number of highly-publicised deaths, many people still see Spice as no more dangerous than herbal cannabis. Harry Sumnall, Professor in Substance Use at the Public Health Institute, suggests this simply isn’t the case.

“There hasn’t been a huge amount of research yet,” Harry explains. “But with regards to the profile of harmful effects, you’re seeing a more diverse range of effects and perhaps some serious conditions as a result of synthetic cannabinoids like Spice that you wouldn’t see with herbal cannabis.”

The high can be similar, but the pharmacology and toxicology of synthetic cannabis means it should be considered a totally different drug, Harry explains. “Usually people present to Accident & Emergency with changes in heart rate or panic attacks, which can also occur with herbal cannabis,” he says.

“But more serious complications like cardiovascular events, heart attacks, strokes, and damage to the kidneys or liver are rare with herbal cannabis and much more likely with Spice. Again, a whole range of psychiatric symptoms including psychosis, paranoia and hallucination can be caused by herbal cannabis but are much more likely from synthetic cannabinoids.”

Data on addiction to Novel Psychoactive Substances (NPS), such as Spice is patchy. However, statistics from Public Health England for 2015/16 show that across the general population, numbers of people who sought treatment for issues related to Spice, such as support with addiction, rose to 1024. This is just the tip of the iceberg. 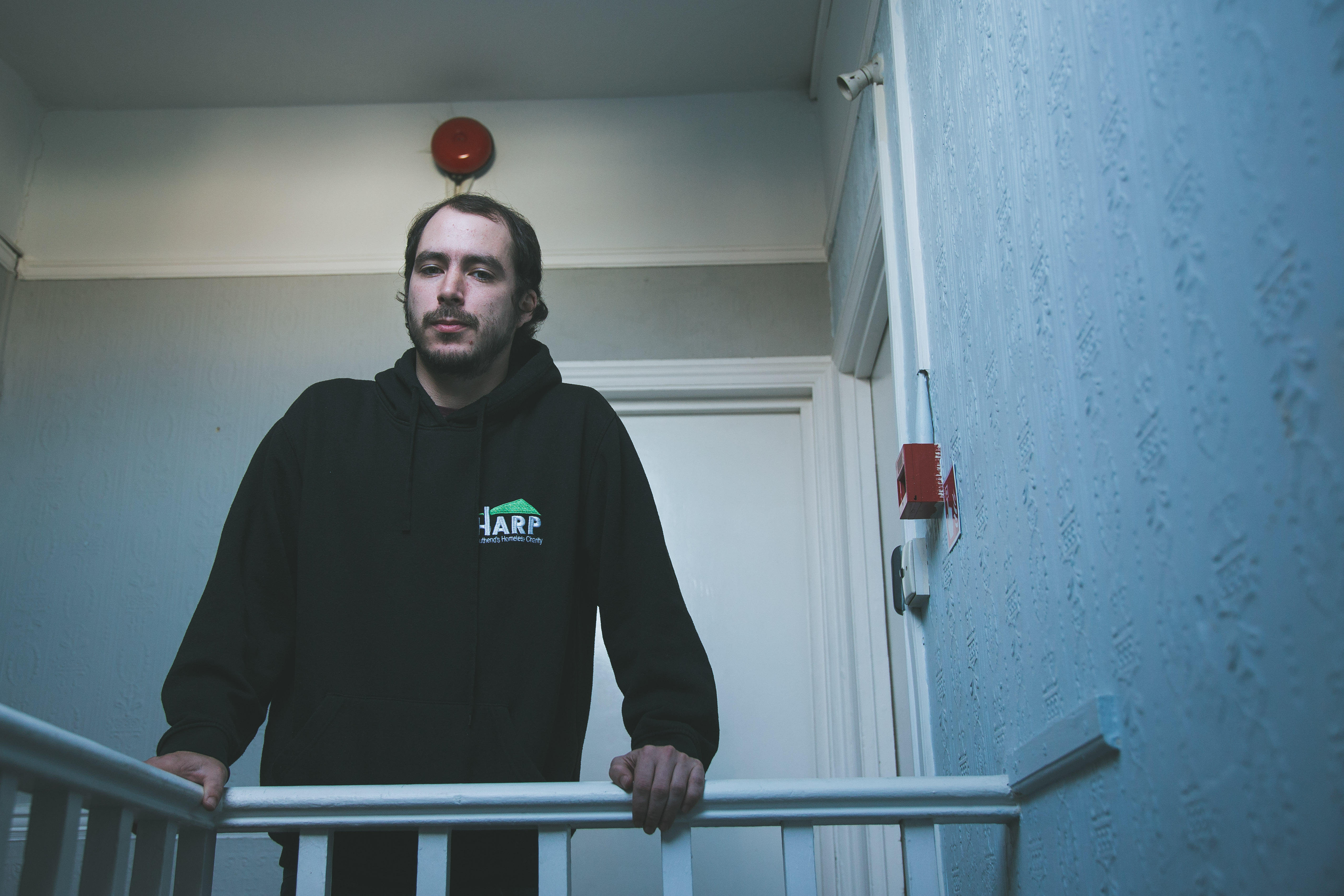 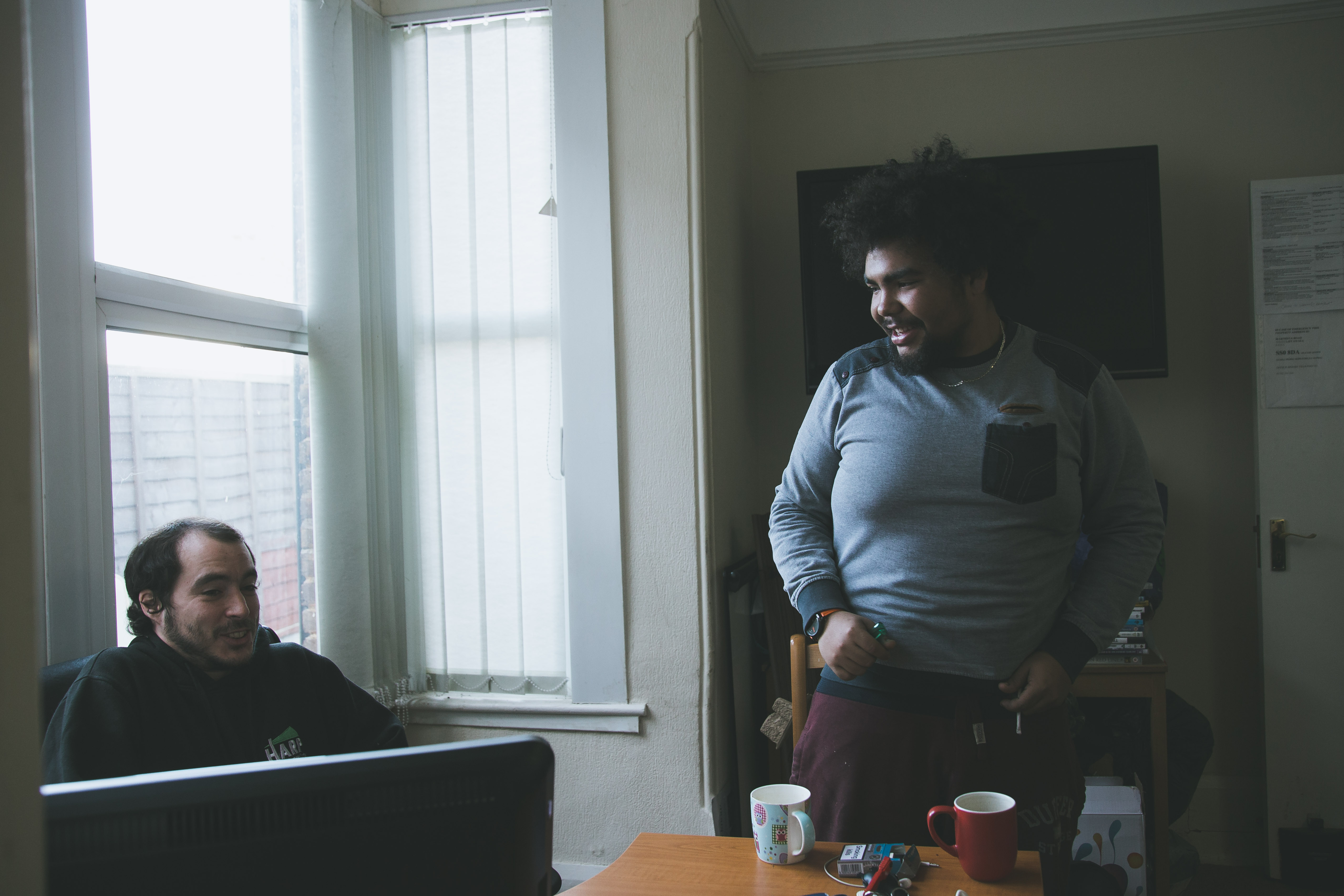 It’s the same picture seen by Andrew. “We we work with all types of addiction,” he says. “Traditionally we’ve mainly been dealing with Heroin and Crack addicts, but those numbers seem to be going down while Spice is going up and exploding. Heroin and Crack users are now taking Spice too, so it’s just another easily accessible drug that people can abuse.”

“Because it’s so new, there aren’t many training courses and what we know about it is very limited”, he continues. “There are no established treatment programmes like there are for Heroin and Crack.” 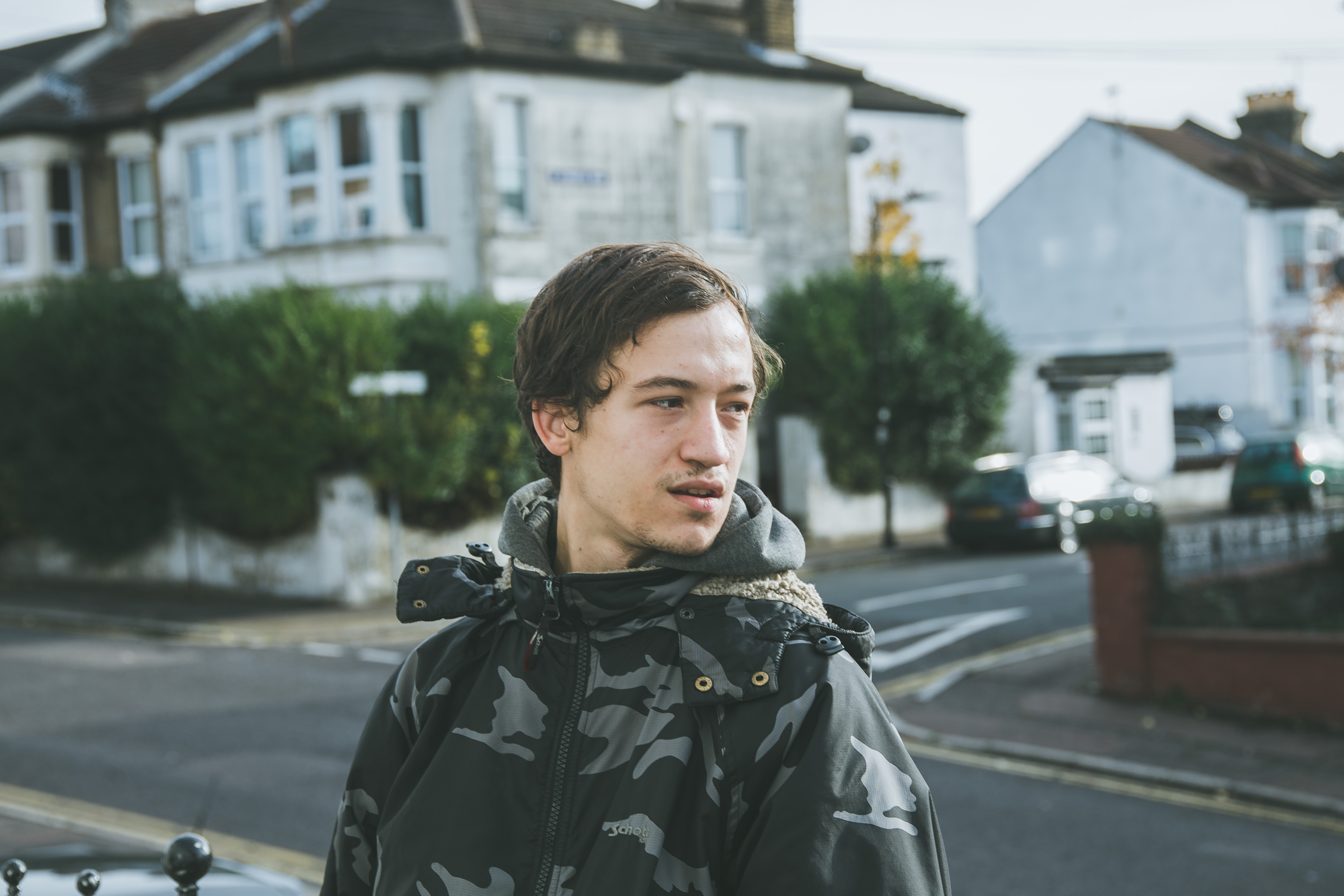 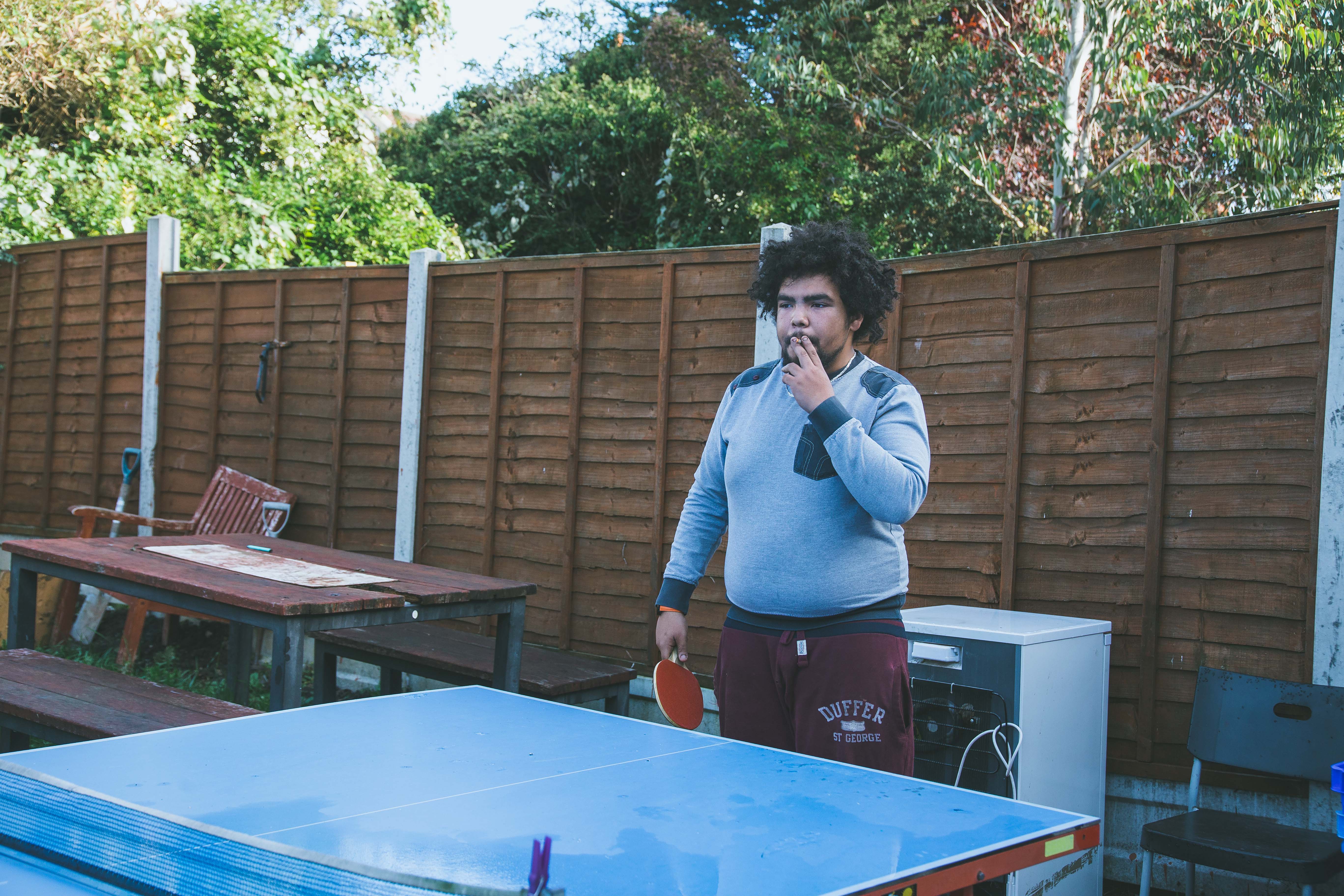 “Anecdotally at least, services, charities and drug treatment agencies are reporting real concerns about embedded use in [homeless] populations,” Harry says. “We don’t have exact numbers but it does seem to be a real problem for people who are homeless, particularly with regards to physical and mental health.”

Initial reports have shown that the NPS ban has closed the majority of head shops and cut down use of Spice among the general population, Harry explains. Yet, Chris and Lewis argue that criminalisation has done little to reduce the availability of Spice to homeless people, put supply in the hands of dealers who also offer other drugs and increased the likelihood of adulteration with unknown substances.

Now clean, Chris and Lewis are some of the few people HARP have seen successfully leave Spice behind. However, at stage two of HARP’s three stage rehabilitation process, they face a long journey before they are living independently and working the jobs they want, in security for Lewis and car engineering for Chris.

“We know that with a lot of high risk populations, including homeless individuals, drug use is just one issue they’re facing,” Harry says. “If we want to tackle some of the harmful effects of Spice, then we also need to address the other issues which are affecting people’s lives. Why aren’t homeless people receiving adequate housing support or good mental health treatment? It might seem obvious, but these sorts of activities would reduce the likelihood that people would be exposed to Spice and mitigate some of the harms.”

Linkedin
RELATED ARTICLES
OTHER ARTICLES
A sharp increase in officers armed with the electrical weapon is resulting in serious injuries and deaths.
The author discusses her new memoir, which offers a sobering reflection on the racism and otherness she’s experienced along with a joyful celebration of her culinary heritage.
Photographer Anne-Marie Michel captures the women who through determination and strength are forging their own way in a male-dominated industry.
Ahead of the release of his new album, the producer reflects on his battle with drug use, getting into painting and what Madonna taught him.
With the virus now a global health emergency, we must take steps to fight misinformation and demand a swift UK-wide vaccine roll out, writes Phil Samba.
As the Criminal Bar Association enters its fifth week of action, criminal barrister Russel Fraser explains why the legal professionals have walked out and how action is likely to escalate.