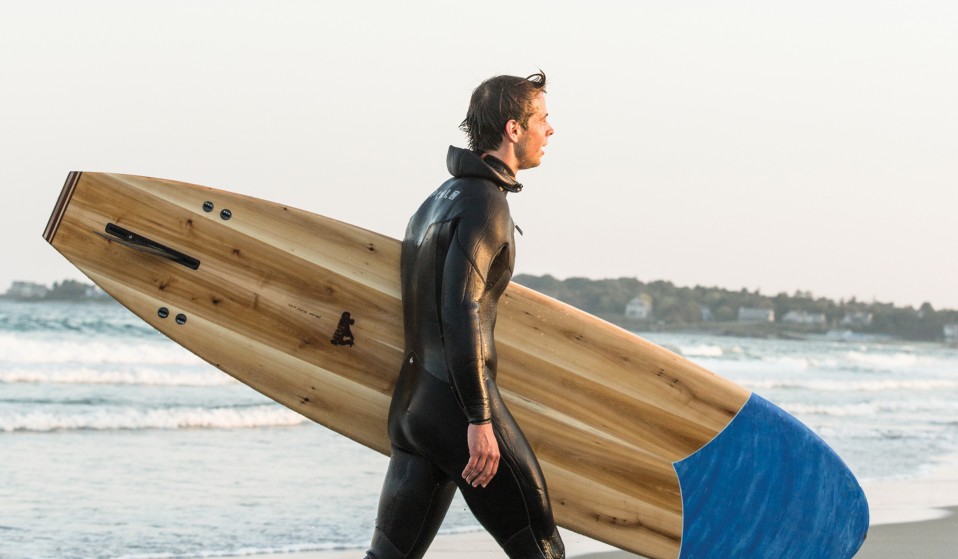 Handcrafted Maine is a new book celebrating the artists, artisans, and craftspeople of Maine – a US state known for its sense of independence.

Handcrafted Maine is a new book celebrating the artists, artisans, and craftspeople of Maine – a US state known for its strong sense of independence. In an exclusive extract, the board-makers behind Grain Surfboards share their story.

“When we started our company, we knew we didn’t want anyone to have set hours. We didn’t want nine-to-five for ourselves or for our employees,” says Brad Anderson, co-owner of Grain Surfboards. “All they have to do is make sure their shit gets done. I don’t care when they do it.”

On a blistering summer day, Brad has been up all night working in the woodshop. “Sure, I’m a little tired, but I do it all the time,” he says. “I actually love doing it. There’s nothing better than being up when the sun is coming up and the birds are singing, and I think, ‘All these people are sleeping and they’re missing this!’” Sometimes, he caps off his all-nighters with an early morning surf off the coast of southern Maine.

Grain Surfboards started as a passion project of Mike Lavecchia’s. “When I met Mike, he was doing this out of his basement,” Brad recalls. “We weren’t friends or anything, but we both had the same ideas about life. We want it simple and we don’t want a lot of stuff.” They had a few other things in common, too–both had backgrounds in boat building, believed strongly in the DIY movement, and were ardent environmentalists. And they both love to surf. 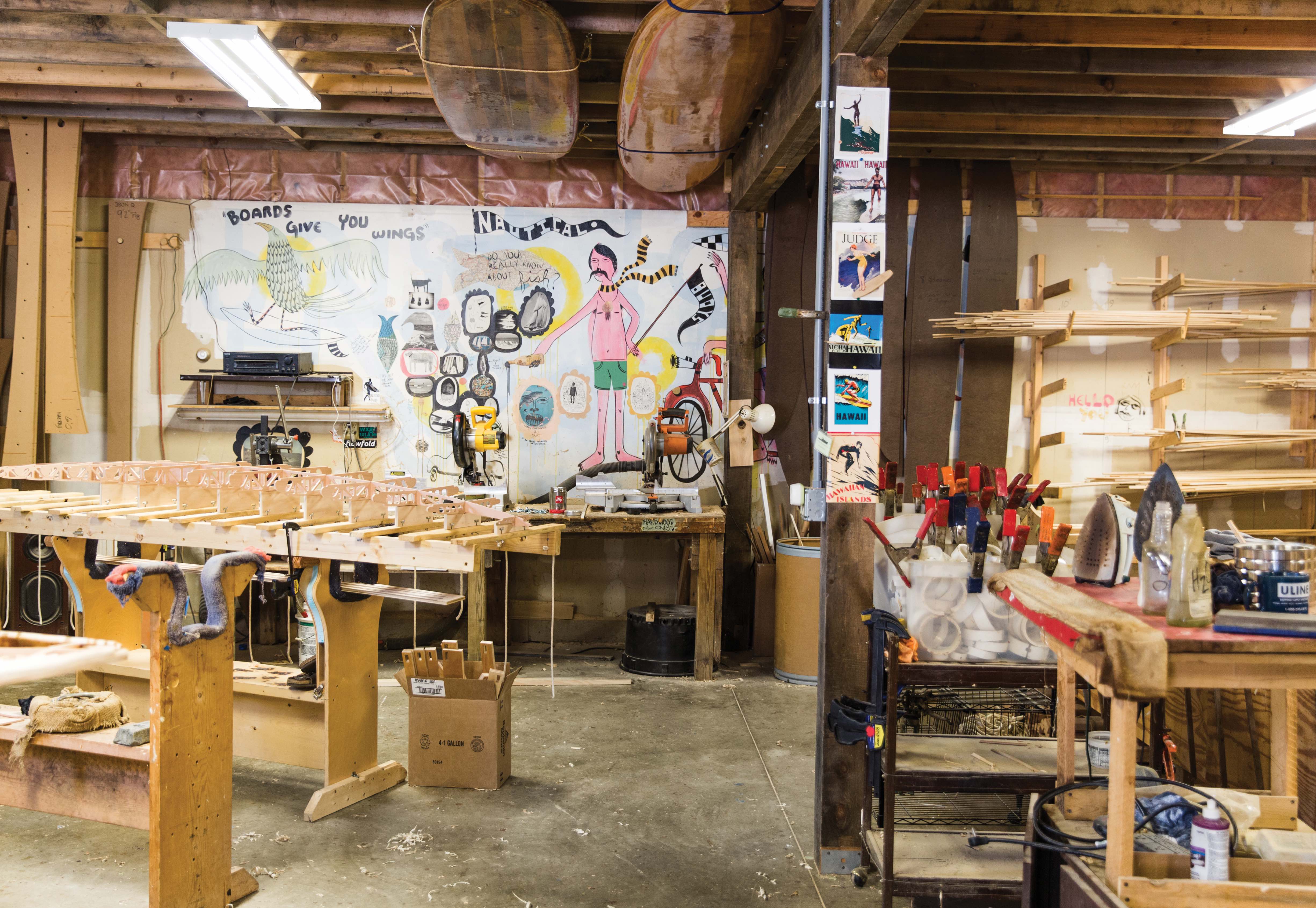 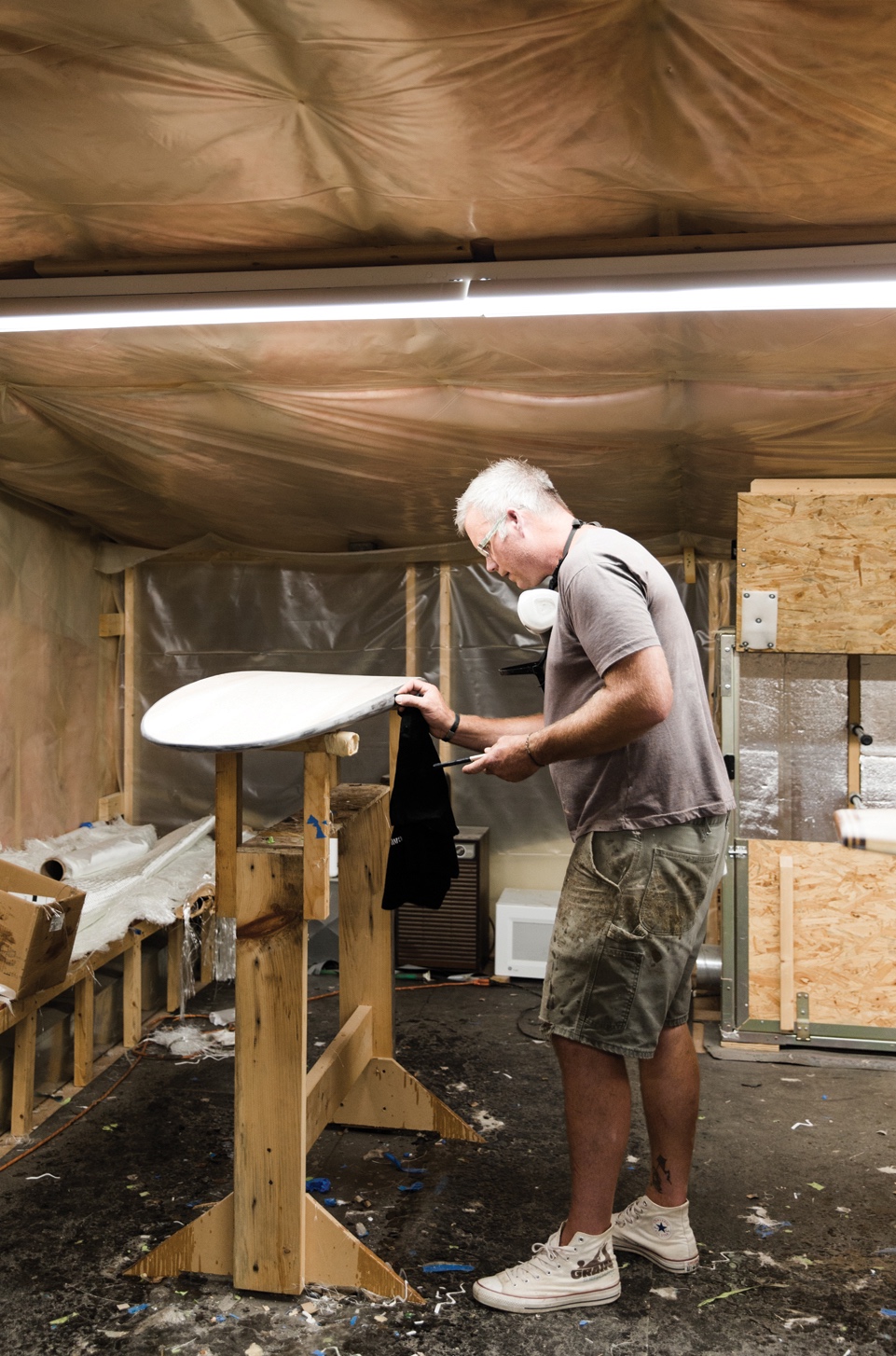 Maine surfers are an anomalous breed. They go out in winter, frozen sand crunching underfoot, to catch waves in wet suits as snow falls around them. They are protective of their surfing spots, often a little secretive–Mike and Brad are downright evasive about their favorite places to surf. They are dedicated to the sport, perhaps even a little fanatical. This trait is especially true of the younger surfers, like the guys who work in the Grain shop, sanding and cutting and fitting the various pieces that make up each board.

Now the company is over a decade old and the Grain co-founders have mellowed. They no longer work out of a basement; Grain is headquartered in a large and rustic white barn on a country road in York, Maine. Much of the work crafting boards is done here. A Grain surfboard is hollow inside and constructed around a frame composed of small pieces of wood. Precision-cut on CNC machines and then shipped to Grain, the interior scaffolding is assembled by Grain workers who add a cedar skin. The resulting boards are lightweight, durable, and uniquely beautiful, thanks to the natural variation of the white and red cedar planks.

Grain surfboards perform differently in the water than the foam boards that most modern surfers use (the earliest surfboards were made of wood; it wasn’t until the 1970s that foam and fibreglass boards began to dominate the market). “Even though our boards are heavier than foam boards, surfers remark that they actually feel livelier in the water,” explains Mike. “Real wood boat enthusiasts say that a wooden boat doesn’t wear them out the way a fibreglass boat does, and I think that’s true of our surfboards. Wood has memory. It always returns to its shape. Not all materials do that.” 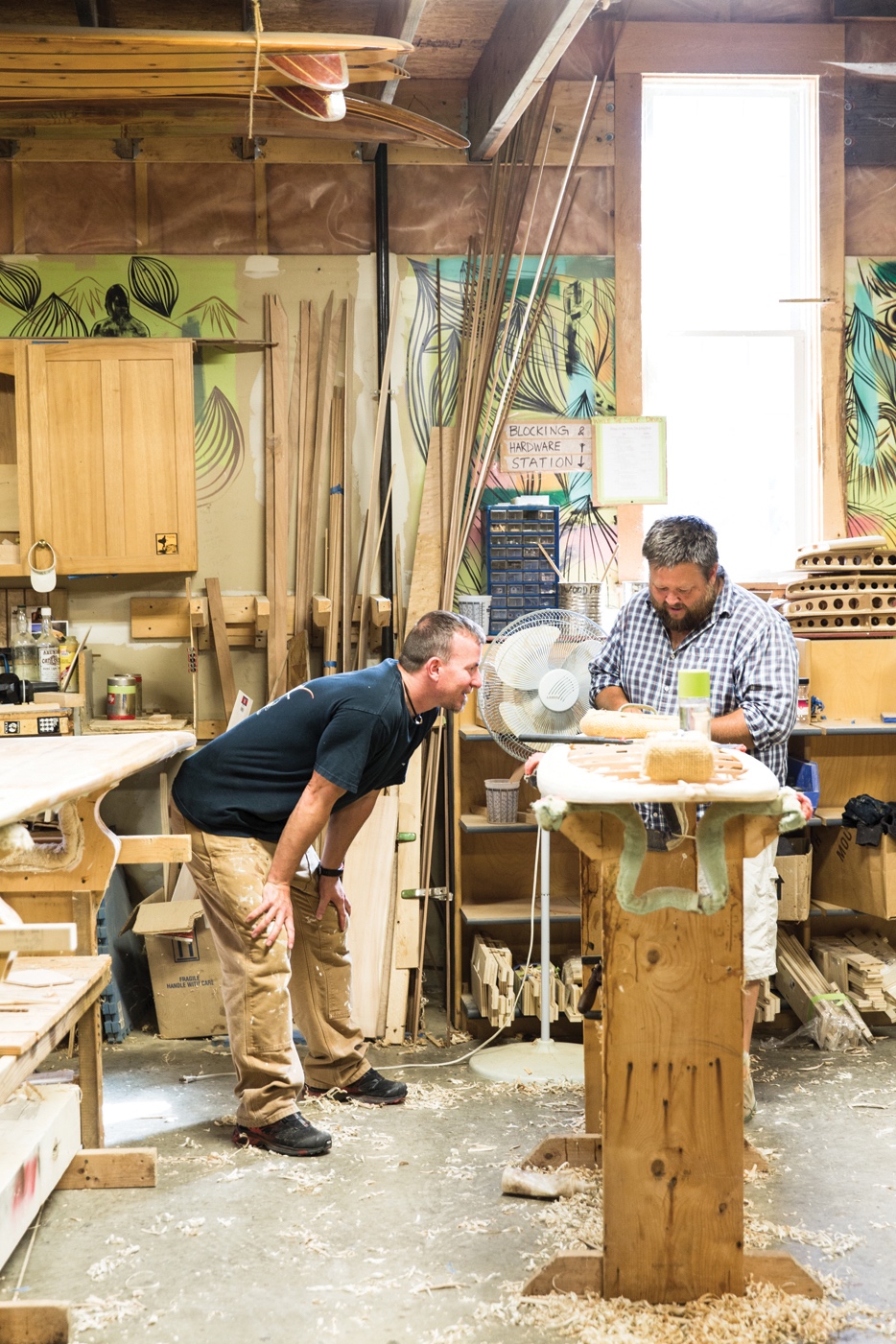 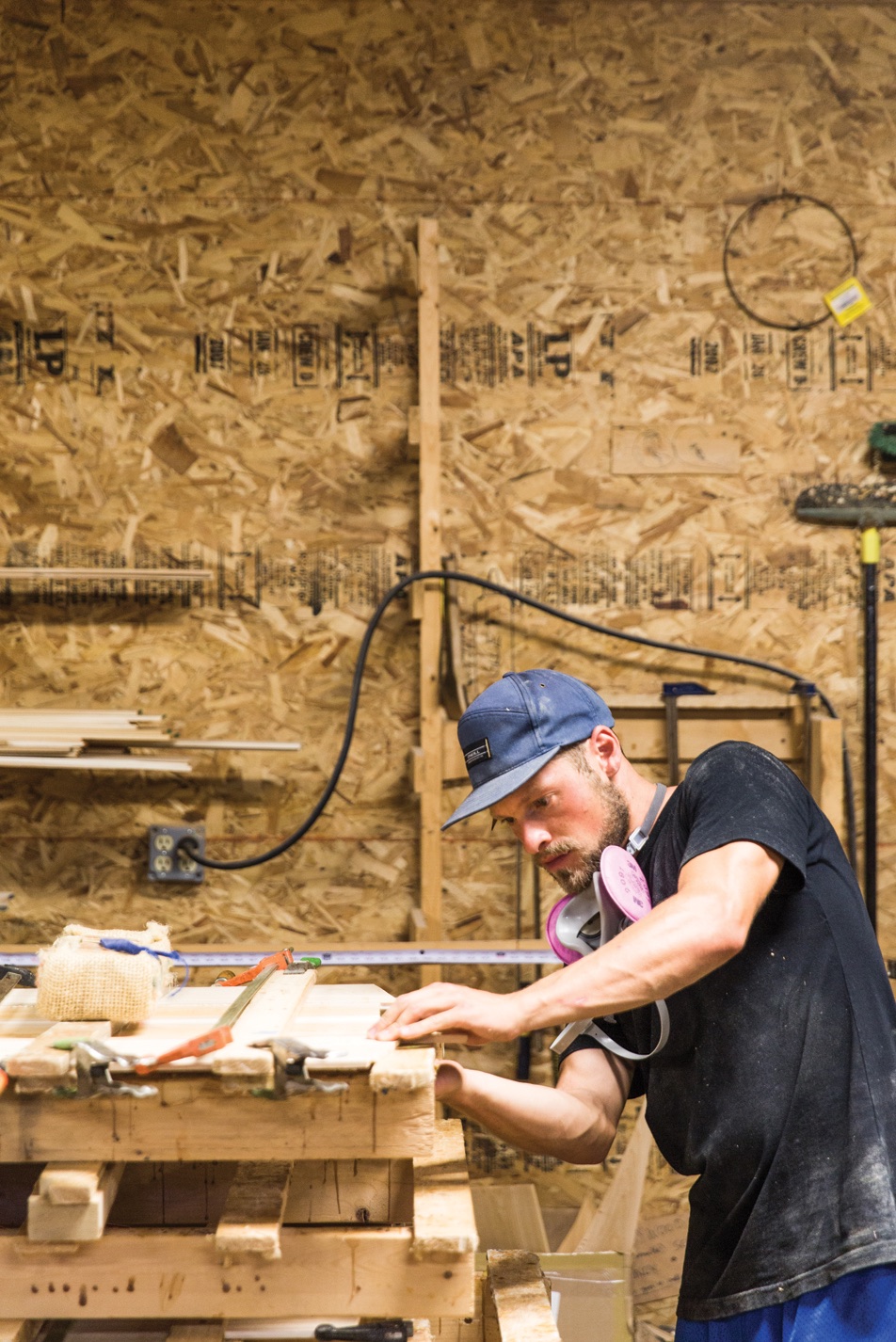 Each Grain surfboard takes approximately fifty hours to make, and the Grain guys claim that they can last a lifetime (with occasional repairs). “Part of our sustainability ethos is to build something that lasts forever,” Mike says. “There are faster and cheaper ways to build wooden boards, but I don’t think they’re better. When we first started, we spent a ton of time researching the history of surfing and the evolution of construction and materials. The way we build boards is similar to how you build boats, but we modified techniques to work better with the tighter compound curves of a surfboard.”

From the beginning, it was important to Mike and Brad to share their knowledge with fellow surfers. Much of their business comes from the surfboard-building kits they sell online. While they require some woodworking skill, the Grain kits are accessible, even for surfers with few tools and minimal workshop space. “We had a guy build a ten-footer in his apartment in Brooklyn,” Mike says. “We really want people to be able to make their own boards. Back in the day, everybody built their own boards. It was part of the experience.” Grain also offers on-site four-day workshops that generally run from Thursday to Saturday (“Just tell your boss you need a long weekend!” their website suggests). Students learn to construct their own surfboards, from building the rails and installing the hardware, to attaching the top planks and sanding them down. It’s an experience that Brad believes helps surfers better connect with their boards, which leads to better surfing—not to mention righteous bragging rights. “They can walk down to the beach, and whenever someone goes, ‘I like your board,’ they get to say, ‘Yeah, I made it,’” he says. 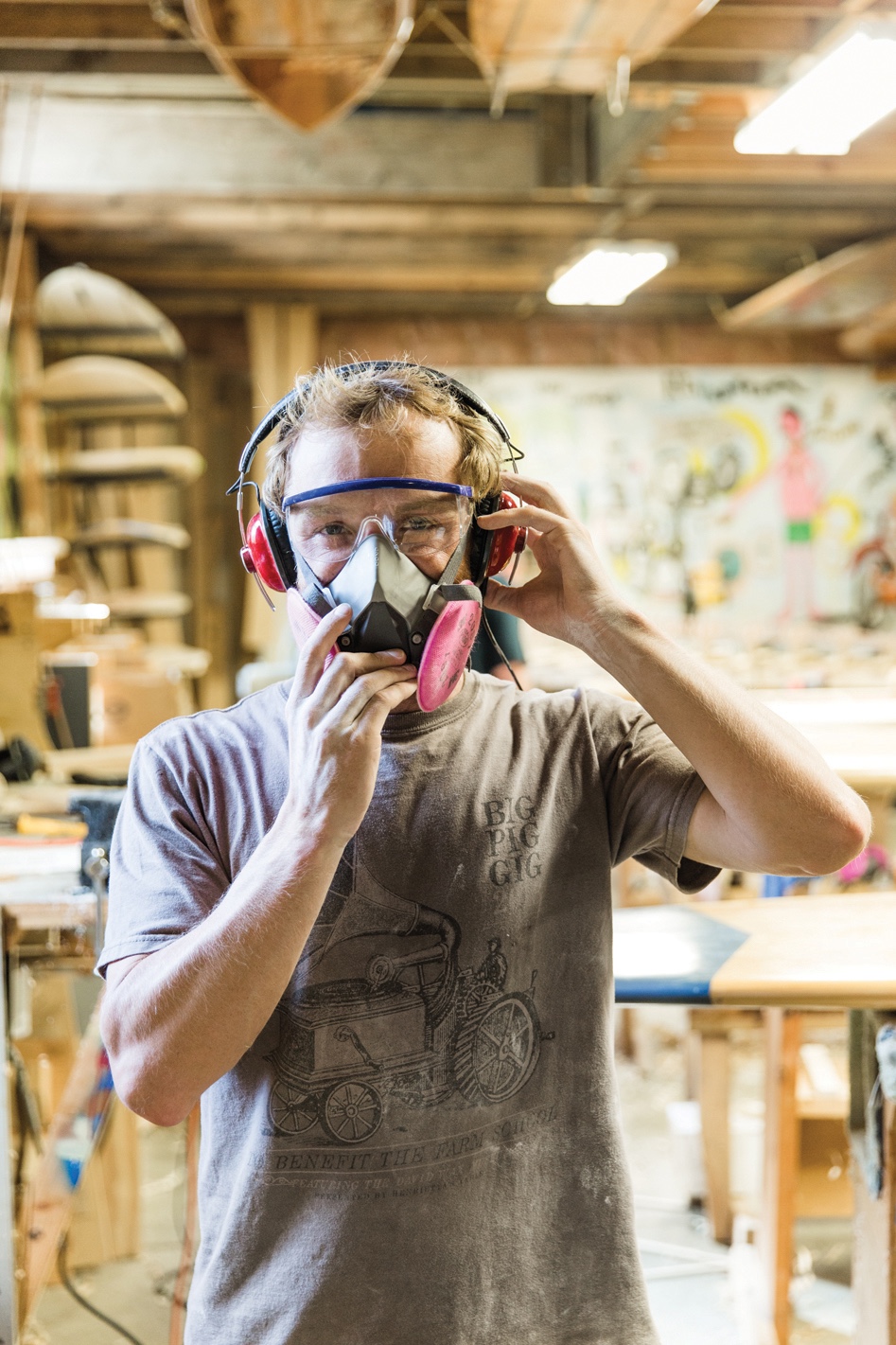 The workshops also offer a chance to experience the lifestyle enjoyed by the Grain co-owners, which includes lots of time outdoors, farm-fresh food served by an on-site chef, and working with their hands. “We’ve had all kinds of people come through, people on their honeymoons, retired guys, fathers with their sons. But my favorite students are the young guys, kids who are still trying to find their way in the world,” Brad says as he leans against the barn. Green fields stretch out before him and sawdust clings to his T-shirt. He doesn’t look like a man who has stayed up all night. He looks content, relaxed. It’s easy to see why a young surfer might envy his life. “When I meet guys who are a little lost, I tell them, ‘Look fellas, it’s not that hard. You don’t have to sign up for all the shit, all that quiet desperation. You can follow your passions. It may not pay you back in money, but it will pay you back in literally every other way. And that’s what matters.’” 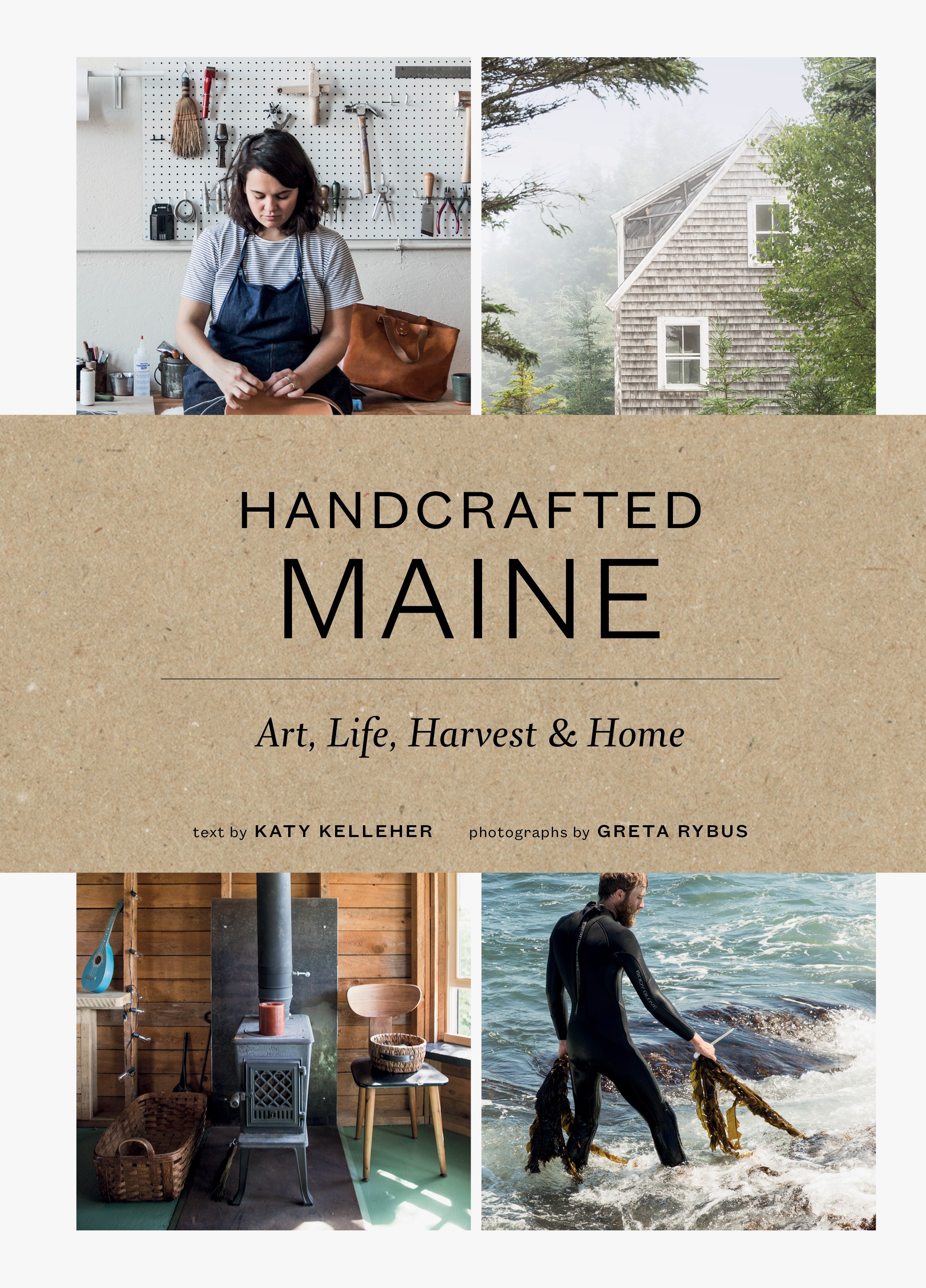 Linkedin
RELATED ARTICLES
OTHER ARTICLES
Ahead of the policing bill reaching its final stages in the Lords, protestors came together to rally against the legislation.
Photographer Melanie Nissen recalls capturing the characters, fashions and rarefied chaos of a rapidly-expanding set of punk bands who helped to redefine the genre.
The photographer reflects on building trust with his subjects and using the street as his studio.
Photographer Philipp Mueller reminisces on shooting Zurich’s thriving nightlife in an era fuelled by experimentation.
A new book traces the legislation’s tumultuous history and the lasting impact its had on LGBTQ+ activism today.
While police claim that body cams increase accountability, the proliferation of the tech raises questions over who it really serves.