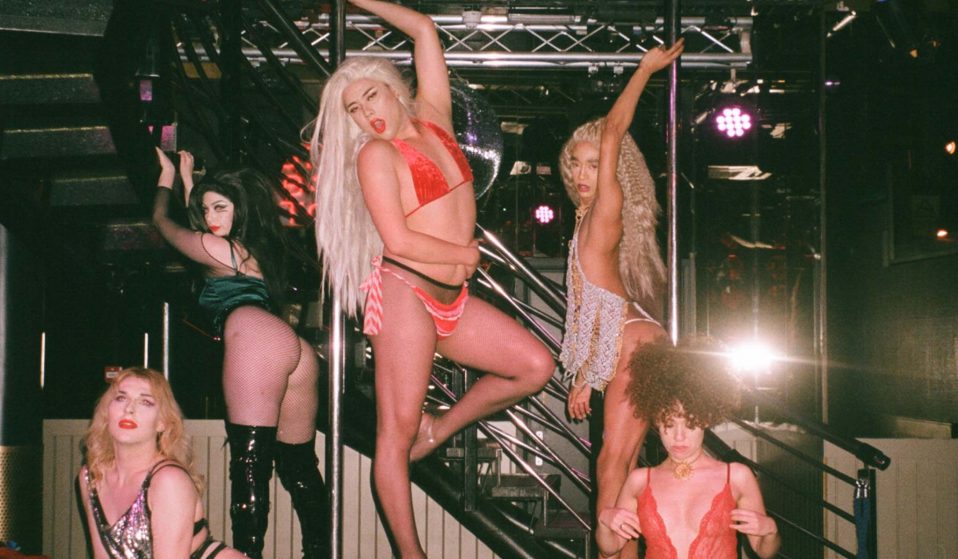 Ahead of its launch, we speak to the people behind Harpies – a new, inclusive London venue that seeks to capture the joy and excitement of strip clubs and transport it to a brand new audience.

Ahead of its launch, we speak to the people behind Harpies – a new, inclusive London venue that seeks to capture the joy and excitement of strip clubs and transport it to a brand new audience.

It’s 3am in Metropolis, one of east London’s busiest, most popular strip clubs, and former home of queer club nights such as Savage and Dollar Baby.

For most of the week, the venue is one like any other: charismatic strippers perform public and private dances for a crowd of largely straight, cisgender men. But tonight is different. With little fanfare, trans activist and performer Lucia Blake has thrown a surprise party for close queer friends and allies; the dance-floor is packed with punters decked out in glamorous looks, all of whom cluster around the performers to cheer and shout with delight. As clothes are slowly removed, specially-designed dollars fly through the air.

After a while the music drops and Lucia steps on-stage to address the vast crowd. The surprise announcement? This isn’t just a one-off club night, but the pre-launch party for Harpies, the UK’s first ever LGBT+ strip club. Upon this reveal, the audience screams with joy, before the rumble of an electric guitar drowns them out and the sound of Def Leppard begins to reverberate through the club: “Pour some sugar on me!”

“We really didn’t tell anyone why we had thrown this party,” Lucia tells me a week later, laughing as she recalls the night. “There were so many queer people who were just excited to be in a strip club watching exotic shows. It became this little hub of people enjoying an industry that’s usually closed off to them.” 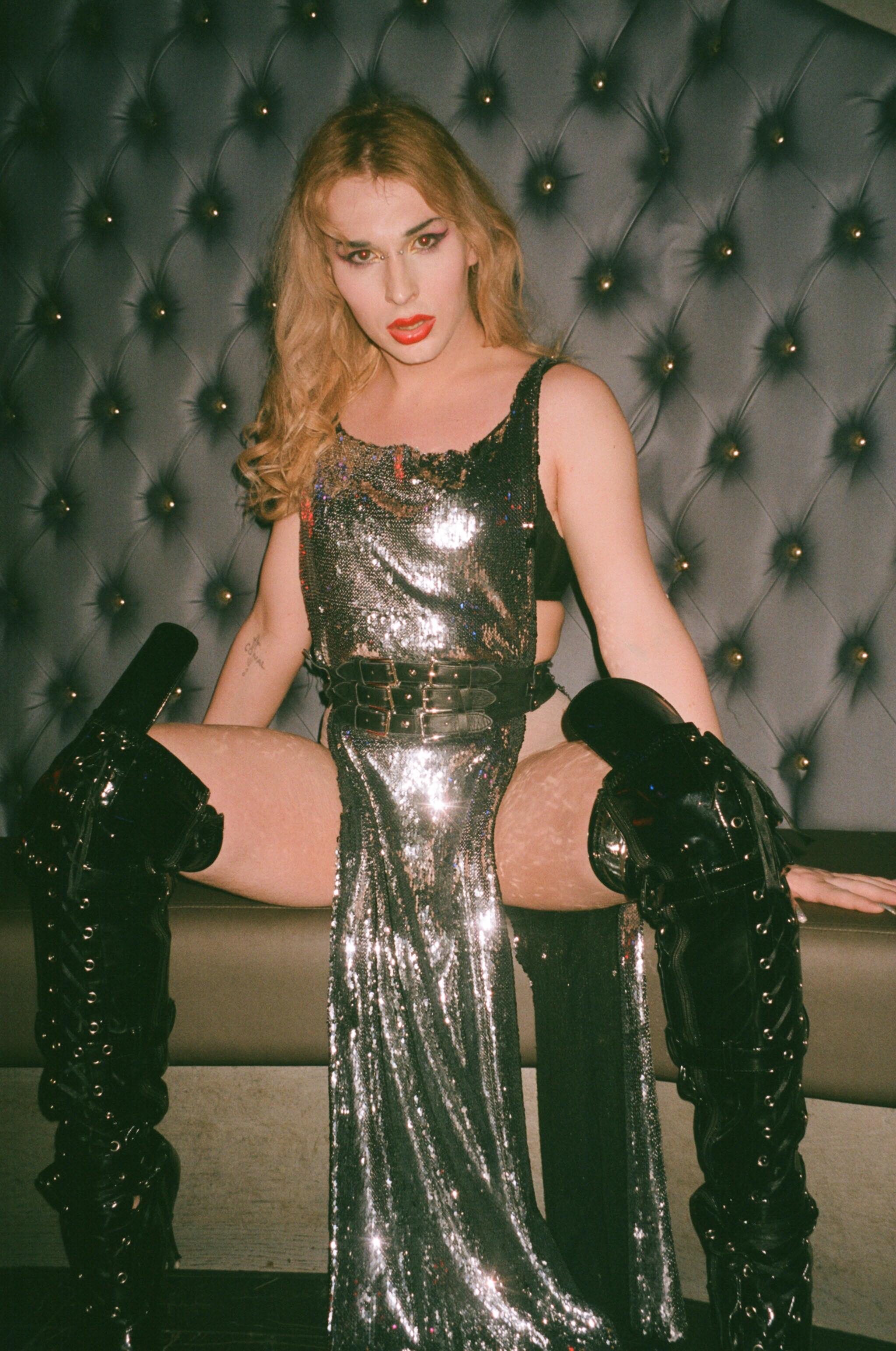 Lucia experienced this exclusion first-hand while hunting for stripping jobs. Having been introduced to the world through cisgender girlfriends who loved performing (“it seemed like a really empowering way to make some money from the sexualisation and fetishisation that’s forced on us by patriarchal structures”), her online searches for trans strip clubs yielded no results. “I found absolutely nothing.”

Frustrated by the lack of options available to her, she reached out to fellow Harpies co-founders Presley* and Jeanie Crystal – both queer women with years of strip club experience. “Mainstream strip clubs are not generally inclusive of queer and trans dancers,” says Presley, who has only worked with two trans dancers throughout her “relatively long stripping career” – neither of whom were working in the UK.

“It’s a huge disappointment, and it’s something we’re trying to change. A trans friend of mine is one of the country’s top cam girls, so there’s clearly no shortage of demand for trans sex workers. It’s about time the stripping industry caught up!” 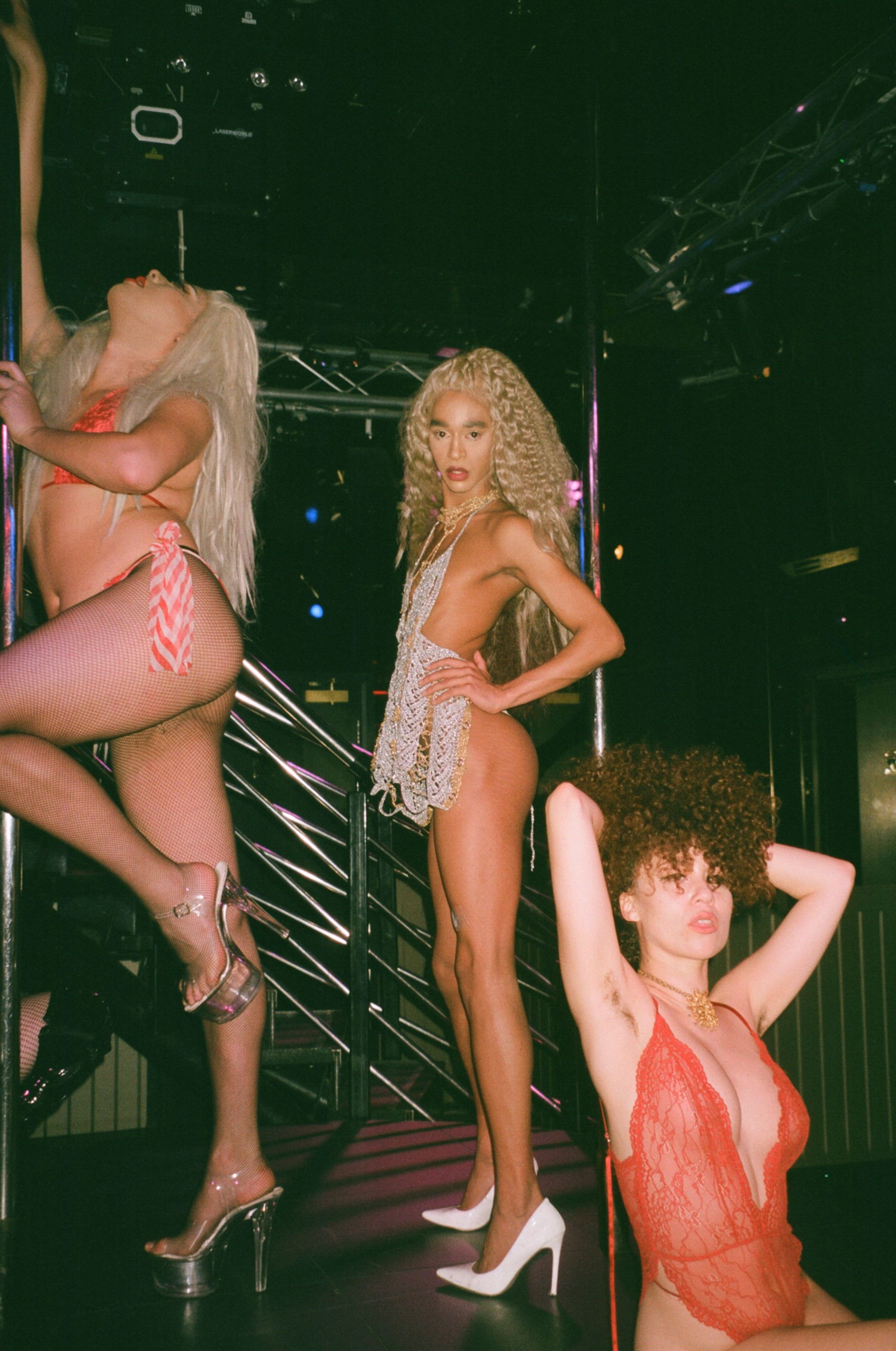 The club will primarily offer employment to communities at disproportionate risk of homelessness, poverty and workplace discrimination – and be run by women with dancers’ best interests at heart. “I’m sure male-owned clubs do a great job,” says Cassandra, a Harpies stripper with an existing reputation as one of London’s most exciting drag queens. “But I know the team [at Harpies] cares about our safety as performers, and our physical and mental wellbeing. Money is important from a business perspective, but when cash takes precedence over the wellbeing of strippers, things can get dodgy and dangerous.”

It’s this trust in the club that ultimately convinced Cassandra to come on board. “I haven’t had professional stripping experience, but I’ve certainly had personal experience,” she says, with a wink. “It’s always been a dream of mine to strip. I grew up loving films like Barb Wire and Flashdance – specifically the scene where [Sunny Johnson’s character] Jeanie fails her ice-skating recital and decides to become a stripper. But then [Jennifer Beals’ character] Alex drags her off the podium and throws her tips in the rain! I couldn’t understand why it was a shameful pursuit – and I definitely couldn’t believe she wasted Genie’s tips like that!” 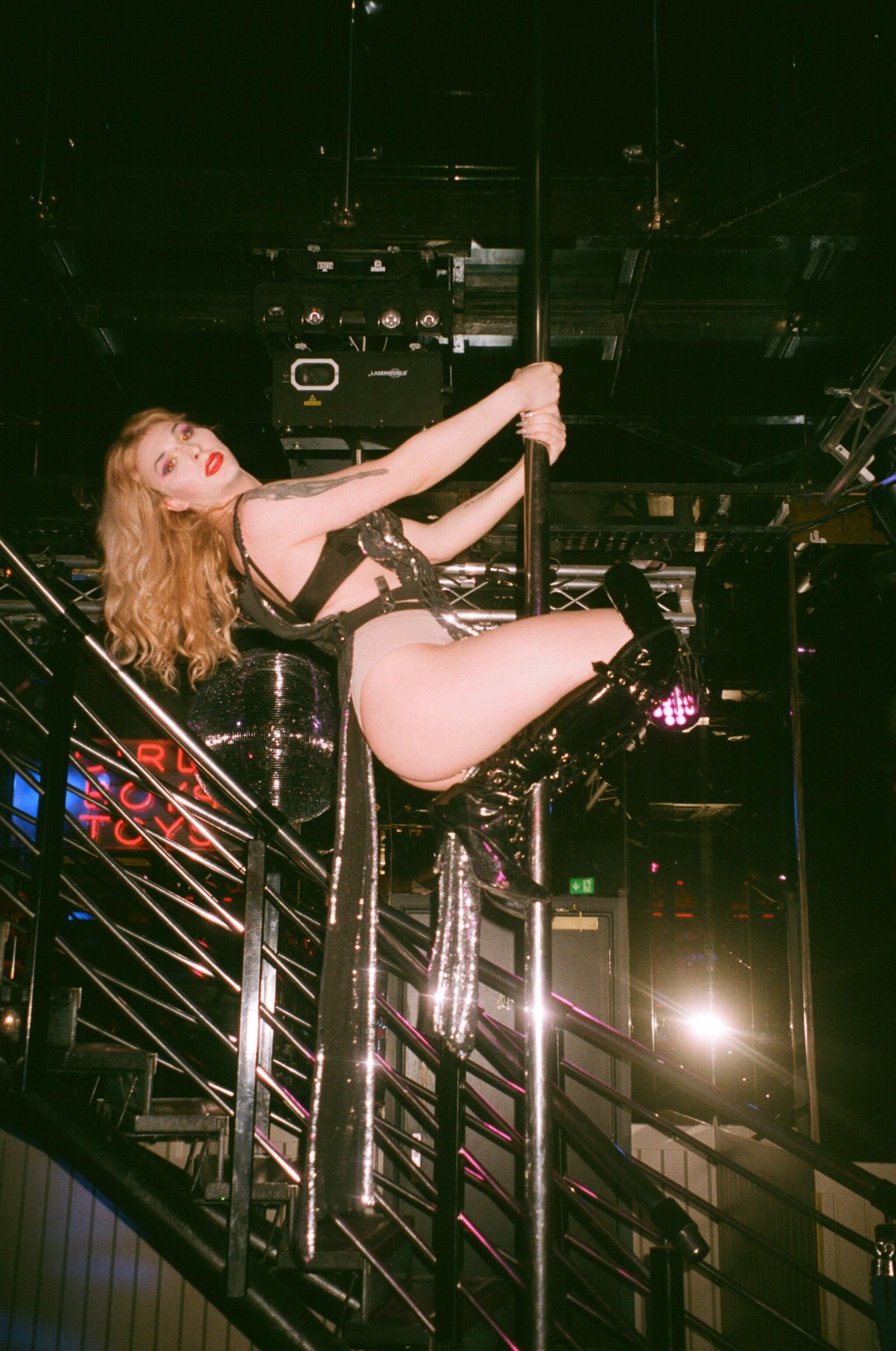 I ask what to expect from Cassandra’s shows, to which she replies: “SEX, SENSUALITY, GLAMOUR, MYSTIQUE AND PASSION!” Lucia, meanwhile, remains tight-lipped, but says there are “amazing things” planned, including performances from opera singers and ballet dancers. As well as stripping, there’ll be elements of performance art to celebrate “the art of exotic dancing, which is sometimes seen as cheap or low-class.” Imagine a sexed-up Las Vegas revue and you’d be along the right lines. “There’ll be something for everyone,” confirms Presley. “Guests can watch the performances, party in the basement or get involved and have a private peep show.”

Entry fee comes with branded ‘tipping dollars’ to make it rain on performers, who then convert them into cold, hard cash. It’s a straightforward business model based on a Las Vegas blueprint, which is less exploitative than the UK norm – something Presley knows from personal experience.

“In some London clubs you can be charged as much as £100 – or even more – as a ‘house fee’ for working per night,” she says. “You don’t get paid any kind of wage, so often dancers end up in debt to the club instead of making money. We will be paying all of our dancers just for showing up, ensuring that nobody goes home with negative cash – and dancers will keep all of their earnings and not just a percentage, which happens in almost every other club.”

They also promise to vet guests for the safety of dancers, support their performers and restrict filming and photography inside Harpies, to protect the privacy of workers who might not be ‘out’ to their families. “It really is about providing income for trans people in a safe space where they are being watched, and they are being looked after,” Lucia reiterates. “They aren’t being abused or taken advantage of, and honestly, if men were running this LGBT+ strip club to profit from women’s bodies, I wouldn’t agree with it.” 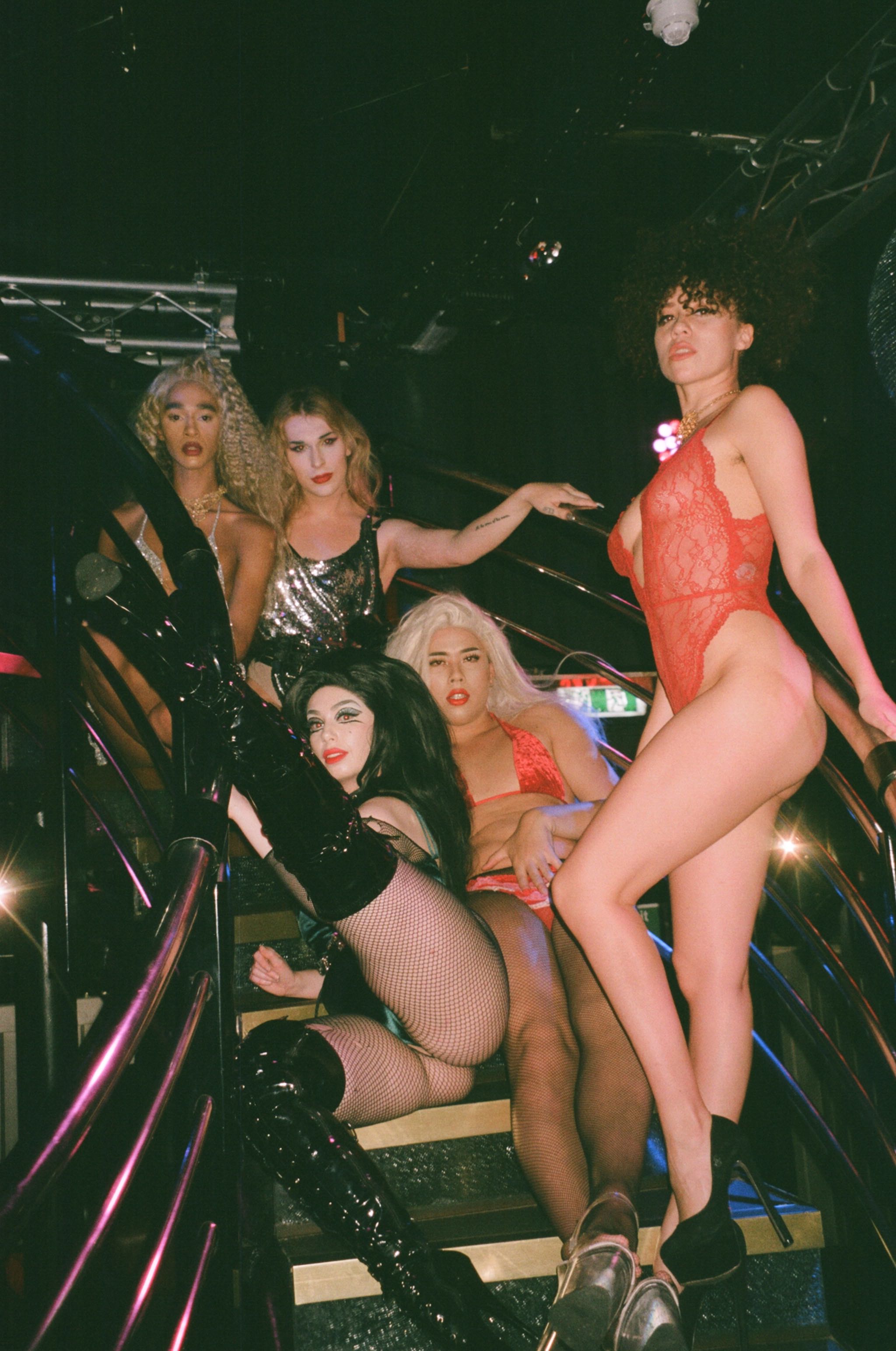 Men are, of course, more than welcome to attend. In fact, Lucia expects “a load” of straight, cisgender men to come and spend their money at Harpies. “We want them to come along and be open to trans attraction, but we’ll have strippers for everyone; trans and cisgender men and women, as well as non-binary strippers.”

This variety is unusual in the context of mainstream clubs, which sometimes ban women from entering as customers. Lucia argues that even the ones that do allow women to get private dances treat it in an almost comedic way. (“Women can’t sit there and quietly enjoy someone’s body like a man could, so we wanted to create a space where they could come without feeling judged in that typically male-dominated environment.”) Inclusivity is Harpies’ core value: by combining unique, sexed-up performances with strip club signatures like private dances and tipping dollars, the club is blazing a progressive trail through an industry built largely by men, for men – avoiding the usual exploitation in the process.

Refreshingly – especially in the midst of Pride season, which becomes more pinkwashed with each passing year – none of this is about tokenism or branding. It’s about satisfying and destigmatising the obvious demand for queer and trans bodies; about creating work opportunities for communities often shunned by mainstream clubs. Most importantly, though, it’s about redressing the power imbalance of queer fetishisation, and allowing performers a safe environment to actually profit from it.

But as well as these vital, political reasons, Harpies’ ethos is rooted in capturing the joy and excitement of strip clubs, and how they can bring that to a brand new audience. It’s a sentiment that Presley summarises neatly. “Why should LGBT+ people miss out on all the fun?!” 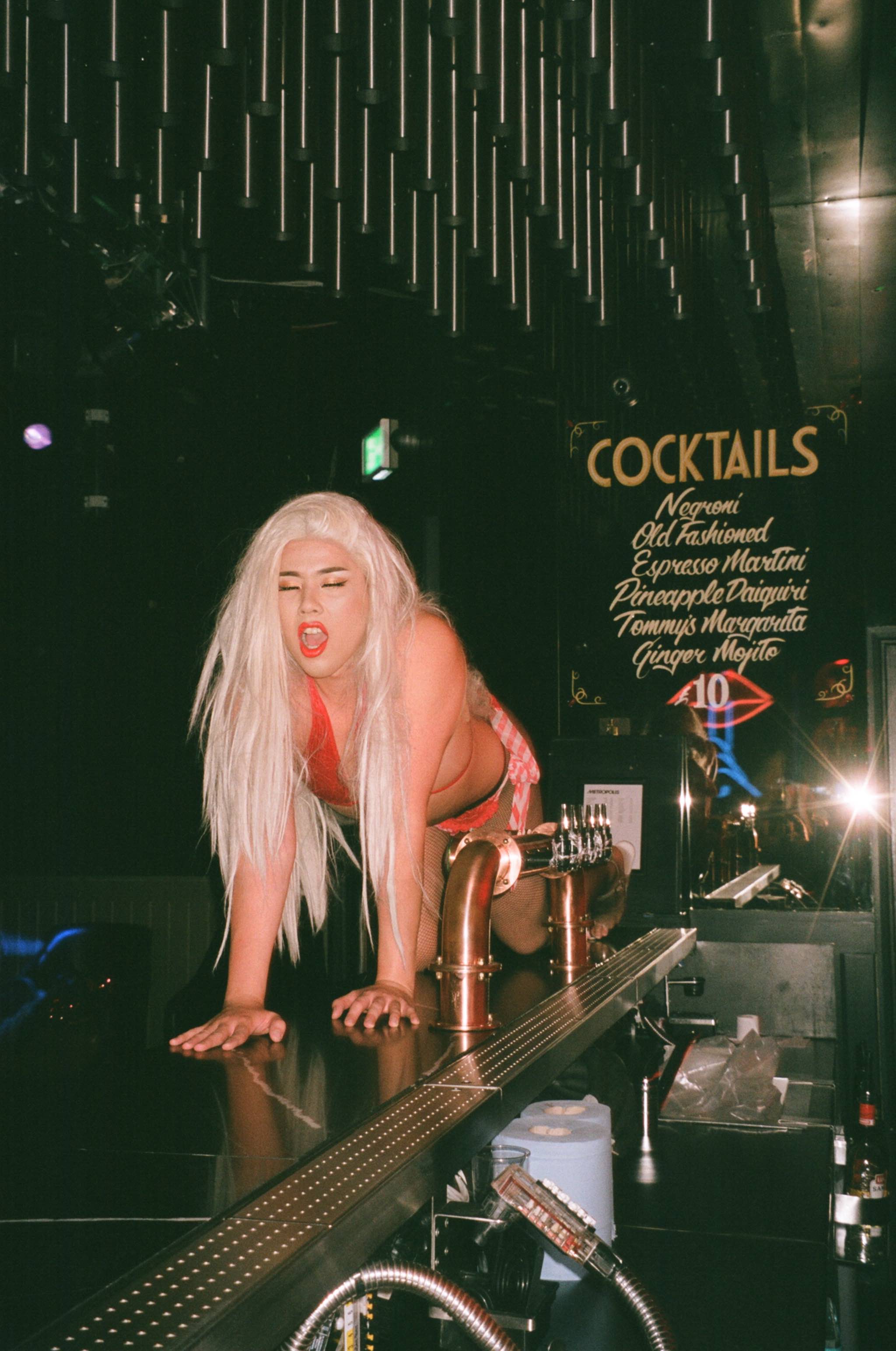 Harpies launches on 20 July, 2019. Tickets are available from Eventbrite.

Linkedin
RELATED ARTICLES
OTHER ARTICLES
The two-day long event returned to London this year, showcasing a spectacular parade, steel bands and Caribbean food.
Sean Maung’s photos are a love letter to the Black and brown communities that make up New York.
Rhiannon Adam spent three months capturing an ageing society wracked by division, isolation, and the aftermath of scandal.
Following the announcement of an 80% hike in the energy price cap from 1st October, crowds gathered outside the offices of energy regulator Ofgem to protest and declare their intention to undertake a payment strike.
Photographer David Corio’s archive offers a glimpse inside a revolutionary era of music and nightlife.
For over a decade, gamblers have won big by employing people to place live bets from the court. But does this dubious method still work?