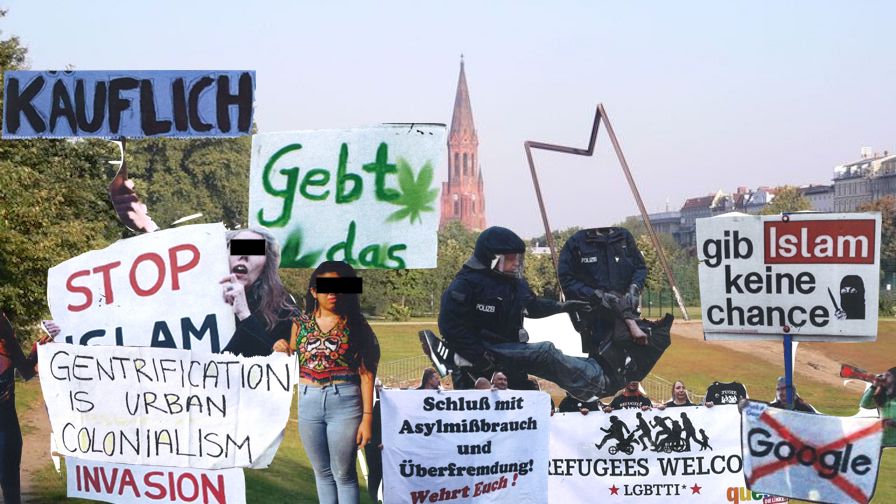 Görli operates as a microcosm of tensions in the capital. The fight for its future remains ongoing – but the conclusion will have an impact that stretches way beyond the park’s walls.

Known colloquially as Görli, the public space operates as a microcosm of tensions in the capital between liberal and conservative factions. The fight for its future remains ongoing – but the conclusion will have an impact that stretches way beyond the park’s walls.

Located on the site of a former S-Bahn train station bordering Kreuzberg – an area in East Berlin that has experienced rapid gentrification over the past decade – Görlitzer Park is known far beyond the city’s walls.

A favourite haunt for both local revellers and tourists, it’s one of Berlin’s most popular public spaces, embodying the free-spirited attitude that makes the German city such a draw. Recently though, Görlizter has become noteworthy for a different reason entirely: as a microcosm of the current tensions in the capital, between liberal and conservative factions.

For years, Görlizter (known colloquially as Görli) has served as a transactional space where illicit trade can take place in the light of day. The park’s location, popularity and reputation making it the perfect place for drug dealers to operate from. Take a walk through the patchy plains, and it’s guaranteed that you will cross paths with a local dealer hollering, “Need some grass?”

Back in May, after failed attempts by police to push out local dealers, park manager Cengiz Demirci decided to try a new tactic. Instead of clamping down, he provided designated areas where dealers were allowed to sell unchallenged, behind pink spray-painted lines. This move, to create the spaces for dealers, sparked outrage across German politics, with critics in both the Christian Democratic Union (CDU) and Federal Democratic Party (FDP) arguing it presented an invitation to break the law. They also claimed it was a betrayal of local residents’ interests.

FDP deputy Marcel Luthe described the graffitied lines as “a farce”. He saw the management method as an approach that merely paid lip service to wider conflicting conversations – such as the ongoing debate between those who would like to see the park physically and metaphorically ‘cleaned up’ and privatised, versus those who feel the park should remain in its unbarred state.

Those actually working in the park, naturally, view traditional policing methods with scepticism. “Sometimes, I think that the police just come here to show people that they are in the area,” says Joe*, a dealer who moved to Germany from Senegal. “But in the end, they aren’t that tough. Even when they come here and find [illegal substances] on you, they are not that hard on you.”

This performative nature of policing appears to be part of the broader problem. Both the locals who live in the newly renovated apartments near the park and the men working on the ground seem to have lost faith in the ability of state authority to establish a sense of cohesion.

Individuals such as ‘The Boss’, a large, sharp-witted man and local ringleader, refuse to be moved, arguing that he has resorted to selling drugs in the park as a way to make ends meet. “I want to work but the German law won’t let me,” he says, simultaneously coordinating multiple marijuana deals as he speaks. “If I can’t work, what else can I do?”

Positioned on the cusp between the park gates and the roadside, The Boss and his entourage occupy one of the most sought-after necks of the wood in Görlitzer – though it’s clear that this really isn’t where he would like to be. “I moved to Berlin because of the economic crisis in my country and to find a good job and a good life. I managed to work here for two years but I can’t work anymore because they [the authorities] don’t want to renew my visa,” he says.

It’s a sentiment echoed by the majority of those operating within the area. Ibrahim – a 22-year-old who came to Germany from Gambia (by way of Italy) – moved to Berlin in the hope of finding work and education. “I know that people in the park would like to work. But we don’t have the same opportunities as the citizens.” Eloquent and softly spoken, he’s sagacious when it comes to discussing employment opportunities. “You can study, graduate, learn the language and still, they will not let you work,” he says.

But Görli remains important for larger reasons. Detached from cultural barriers, the park has come to represent a place of social acceptance – making money isn’t the only draw of being there. “I’m so lonely at home but when I come here I can entertain with people in my own language so I feel better,” says Anthony*, who is originally from Senegal. “Berlin is a good place because you find almost every culture. I have many friends from The Gambia and Senegal that speak the same mother language with me. When I’m [at the park] I never feel alone.”

In the tightly clustered neighbourhood at Görli, a community – the majority of whom come from West Africa – find cultural support by fostering close social contact. Exclusion from entry, belonging, and citizenship is a narrative common to many men here. As such, the park acts as a protective space.

When Görli was transformed from the railway station into a green space it is today in the early 1990s, it was heralded as an inclusive space for all. Mass migration after the fall of the Berlin wall and a rise in cheap housing in the area made Kreuzberg an appealing place to settle for a wealth of immigrants. Home – or ‘heimat’ as it is called in German – is for everyone. But it is a political issue. As Berlin grapples with its newfound status as Europe’s centre for immigration, Görli is set to play a pivotal role. As a result, the battle for its future takes on a newfound significance – one that stretches way beyond the park’s walls.

* Names have been changed

Linkedin
RELATED ARTICLES
OTHER ARTICLES
The novelist discusses his electrifying debut, which offers a deft examination of masculinity under late capitalism.
In the UK, Hongkongers are continuing to stand in solidarity with the pro-democracy movement.
Hundreds gathered together to protest the policing bill by making as much of a racket as possible.
Jermain Cikic reflects on his experience of visiting the island of Samos, Greece, in the summer of 2021.
From Brooklyn gang members, to Welsh miners and the residents of East Harlem, Bruce Davidson used his camera to shine a light on the most marginalised.
Photographer Philipp Mueller reminisces on shooting Zurich’s thriving nightlife in an era fuelled by experimentation.