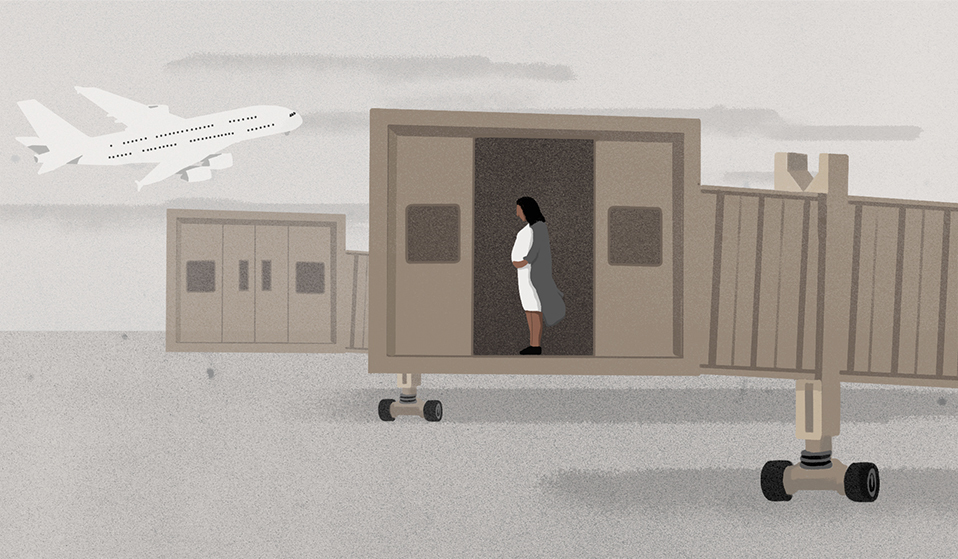 In countries where reproductive healthcare is neither safe nor legal, many women rely on travel to access the help they need. But in the age of coronavirus, this is no longer possible.

In countries where reproductive healthcare is neither safe nor legal, many women rely on travel to access the help they need. But in the age of coronavirus, this is no longer possible.

Anna* and her fiance have been living and working in Dubai for the past four years. They had planned to get married back home, in Seychelles, in the summer.

The plan for a wedding is now tentative, given the ongoing impact of the coronavirus pandemic. But Anna and her fiancé are busy making all the calls they can to secure a marriage certificate from the Seychelles embassy, which has been shut down for all non-emergency situations.

“I found out I was pregnant in early April,” says Anna. “I don’t know when the flights will resume. If I would even be able to fly by then, I can’t take the risk by waiting. I just need to get a marriage certificate urgently – I wish my embassy understood that this is a serious thing.”

Anna is worried because article 356 of the UAE Penal Code states that anyone convicted of engaging in consensual sex outside of marriage, if caught, is likely to be punished with a jail sentence, followed by deportation. Although Dubai turns a blind eye to unmarried couples who cohabit – usually wealthy expatriates – pregnant women have, over the years, been arrested and then jailed if they fail to provide evidence of being married.

To access maternity services – in both public and private hospitals – expectant mothers have to open a file and this requires a marriage certificate. While the current circumstances might be rare, Anna’s situation is anything but. Unmarried pregnant expatriates in the UAE frequently carry out most of their pregnancy back home and then return to UAE, if they choose to, after giving birth.

“Ideally, I am flying back to Seychelles as soon as flights return to normal, but I will need antenatal care sooner or later and I need to be prepared for the worst,” she says. “It is legally okay to be an unmarried mother in the UAE so long as you didn’t carry out your pregnancy here. Socially it is just like anywhere else – depends on your crowd.”

Anna is currently dividing her time in lockdown between trying to reach out to her embassy and seeking advice from online forums. There are a number of resources dedicated to women currently in the UAE who are seeking advice about the reproductive healthcare services that they would be traveling to access in regular circumstances.

“There [are] a lot of grey areas in the law so I am just turning to corners of the internet for help with information,” she says. “For instance, I found out that hospitals may compare the date of marriage against the estimated date of conception, but there is usually no issue if you got married at least six months before giving birth.”

Anna says she has connected with seven women online, all of whom are all in the UAE and awaiting flights to start operating again in order to access reproductive healthcare in a safe and legal way. Three of them were visiting Dubai when the travel restrictions were implemented and are now reaching out to their embassies for emergency repatriation flights, whereas the other four are seeking out ways to access abortion.

Abortions in the UAE are considered illegal in all circumstances but two – if the mother’s life is at risk because of the pregnancy, or if the fetus has a disorder that makes it “incompatible with life” and below 120 days.

Some doctors may offer manual abortion services privately but will typically charge extremely high fees and only consult patients who comes with a reliable reference – because assisting in aborting a pregnancy is also a criminal offence in the country that can lead to imprisonment to up to seven years.

It is also possible to purchase ‘abortion pills’ from the black market – but prices can go as high as AED 5000 (over £1,100). In comparison, the market price for a set of mifepristone and misoprostol tablets is around AED160 (around £35) in most European countries, and lower still in other Asian countries.

The pills sold on the black market can often be fake or expired. Even in the cases when they are not, mifepristone and misoprostol tablets can cause excessive bleeding, infections, and abdominal pain if not administered properly. World Health Organisation guidelines state that the use of mifepristone and misoprostol for termination at more than 63 days “requires an inpatient setting, and raises separate medical, legal, and service issues”.

A few years ago, a woman in Sharjah, UAE, went on trial for undergoing abortion after she developed complications from the use of these pills and had to be rushed to the hospital which found traces of misoprostol in her blood.

This is why most women who can afford to have been turning to nearby countries where abortion is legal – such as Tunisia, Morocco, Algeria, Turkey, or India – as their safest option to access reproductive healthcare. In fact, a few private clinics in India now offer packages including airport pick-up and drop-off services, as well as assistance with finding a nearby hotel, for women who want to take a single-day trip to India for getting a safe and legal abortion.

It is not just women in the UAE, however, that have to travel abroad to access reproductive healthcare services that are restricted at home: abortion is illegal in most circumstances in the entire Gulf region. Given the travel restrictions, they are all turning online to find information on alternatives.

Sarah*, a 23-year-old Saudi woman in an arranged marriage, is one of them. “I found out I was pregnant only 6 months after being married to someone I never knew so I did not feel comfortable completing the pregnancy,” she says.

Because travel wasn’t an option, Sarah decided to take the risk and get in touch with a local doctor (recommended by a friend’s mother) and ask for help. “It was risky and scary and she was crying and told me I am a monster for doing it,” Sarah says. “But I guess she liked the money, so she gave me some pills on the down-low.”

The pills, that Sarah now believes were probably the expired or duplicates that are widely available in the black market across the region, didn’t work. “I told the doctor who then offered, in her words, to ‘pull the baby out of me’. But at this point, everything seemed too risky and I was in a very bad place emotionally, so I thought about looking for other options,” she continues. “I am sure there are doctors here who are willing to help women without judging them so vocally – but I didn’t have that luck.”

Sarah reached out to a black-market dealer, whose number she found online. But the prices they were asking for to deliver the pills amidst the lockdowns were out of her budget.

“They were asking me for money I didn’t have – I could have gone to another country and back twice for that amount – and I didn’t want to take the risk in case the pills wouldn’t work again.”

That is how she came across a website that stated it provides abortion rights services, worldwide, to people who don’t have access to it. Women on Web is a Netherlands-based online abortion service that delivers mifepristone and misoprostol pills by mail to women in countries where abortion is illegal.

Those seeking an abortion must first have an online consultation with a licensed doctor. If they are less than 10-weeks pregnant and do not have any severe illnesses, pills are delivered, within a week, by mail to their home addresses. They are asked to make a donation of €70-90 euros – if their economic circumstances allow – to ensure that the service continues to be available to everyone who needs one. Sarah had her online consultation and received the misoprostol and mifepristone three days later.

In January 2020, Women on Web received 69 help requests from the UAE  and 43 from Saudi Arabia that went up to 185 and 94 respectively in April. “The inquiries we have been receiving from the Gulf region have doubled since lockdowns began to be implemented,” says Hazal Atay of Women on Web. “We were initially not certain if we’d be able to continue our services seamlessly given the uncertainties of everything but luckily our suppliers, that are based in China and India, have not been affected and postal services have not been disrupted.”

Sarah had believed she was 9 weeks pregnant but later recognised that she had miscalculated and was 13+ weeks in. “I actually went through labor and gave birth while my husband was asleep next to me. I kept quietly pulling my hair from the pain during the whole process because I couldn’t wake him up.”

Sarah had to take the pills every three hours and, in the morning, she woke her husband up and informed him she had to go to the hospital as she was bleeding. The doctor confirmed the miscarriage and has asked her to come back in 14 days for a cervix cleaning surgery.

“It was an extremely painful experience, physically and emotionally, but at least, I was able to find my way around it given how different everything is right now” she says. “I am lucky that I am married because if I wasn’t, the risk would be so much higher because if something went wrong and I would have gotten caught being pregnant and attempting abortion, I don’t even want to imagine the consequences.”

* Different names have been used to protect anonymity.

Linkedin
RELATED ARTICLES
OTHER ARTICLES
Zsófia Sivák’s ongoing project documents the country’s tavern culture, preserving a once defining part of rural life.
Taking us through one of the most dynamic years in recent history, Laylah Amatullah Barrayn new photo book contains tender yet confrontational portraits.
A new podcast is opening up the conversation between trans women and trans amorous men in the hope of building coalitions.
After fleeing the war in Ukraine, people are finding it impossible to secure affordable and decent housing in the UK.
A group of aid workers face prison for helping to save people fleeing their homes at sea. If they are charged, it will have a chilling effect on humanitarian efforts.
After building his reputation covering the US civil rights movement in the 1960s, the photographer went on to produce some of the most enduring images of the past century.