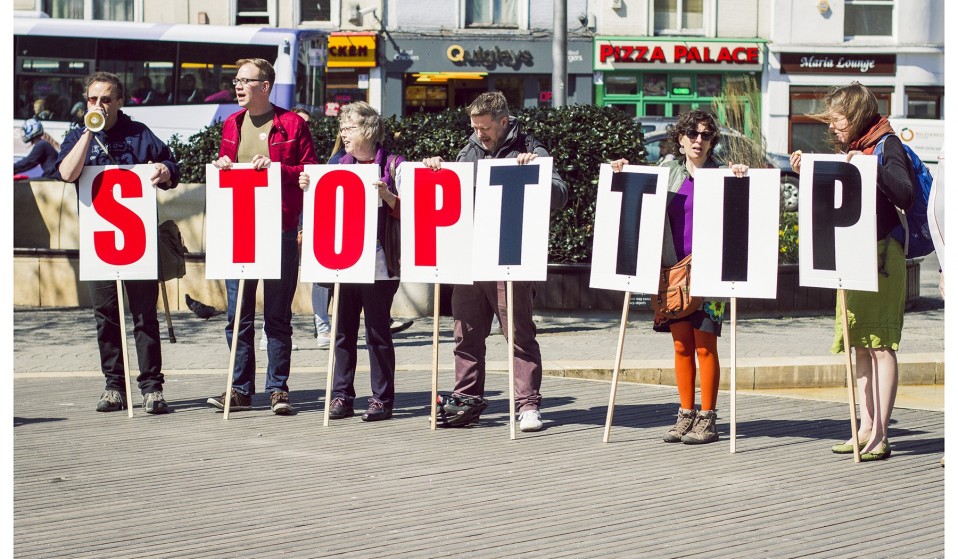 The Transatlantic Trade and Investment Partnership is championed by the European Union as a groundbreaking new deal that'll guarantee us way out of recession, but in reality it'll pave the way for lower safety standards on products, force the privatisation of public services, and give immense power to big business.

The Transatlantic Trade and Investment Partnership is championed by the European Union as a groundbreaking new deal that'll guarantee us a way out of recession, but in reality it'll pave the way for lower safety standards on products, force the privatisation of public services, and give immense power to big business.

So far, the trade deal TTIP hasn’t been very popular with the public. Hundreds of thousands took to the streets of Berlin to show their discontent with the proposals last year, and over three and a half million people (and rising) have signed a petition demanding it be scrapped. But what is the Transatlantic Trade and Investment Partnership? What’s all the talk about regulations and investor rights? And why are people rallying against it?

TTIP, according to those who are fighting it, has irreversible consequences that will shape our economies for decades. We’ve put together a guide to help make sense of it all.

The United States and the European Union have been negotiating the TTIP trade deal since 2013. In short, TTIP is trying to make it ‘easier’ for companies on both sides of the Atlantic to do business with each other. Most trade deals aim to get rid of tariffs – taxes you pay to trade with someone outside of your country. But tariffs between the US and the EU are already seriously low, averaging at around 3%. TTIP sets out therefore to get rid of regulatory barriers to trade, although these “barriers” represent safety standards set to protect people and the environment.

What are the benefits set to be?

Those advocating for TTIP say it will positively affect growth, help small businesses, and create more jobs. We’re told it’ll cut prices when we shop and offer more choice for consumers. You could use the example of Levis jeans: because of trading tariffs, they are much more expensive in the UK than in the US – supporters of TTIP say this could all change.

So far, so good. Jobs, economic growth, taking care of small business… Why are people making such a fuss, then? The problem can be summed up with three words: deregulation, privatisation and corporate courts.

What’s called ‘regulatory convergence’ seeks to bring standards on food safety and the environment in the EU closer to those in the US. This means that food safety rules such as the use of GMOs, labour rights, use of toxic chemicals and digital privacy laws will all have to ‘harmonise’ between the EU and the US.

Take chemicals: In the EU 1321 chemicals are banned cosmetic industry – In the US it’s just 11. If trade is going to be easier, the EU will have to allow for more chemicals in its cosmetics in order to “harmonise” with standards in the US.

Meanwhile in the United States, bank regulations are much stricter than in the EU. Put in place after the financial crisis, the US regulations seek to curb the power of bankers. It’s feared that TTIP’s ‘regulatory convergence’ will loosen up regulations and hand the power right back to big corporations.

One of TTIP’s main aims is to open up Europe’s public health, education and water services to US companies. This could mean the privatisation of services such as the National Health Service in the UK. In the deal is something called a ‘stabilisation clause’, which means that once you ratify TTIP the deal is binding for 20 years.

So let’s imagine Jeremy Corbyn or Bernie Sanders end up in charge, and one of them decides TTIP isn’t really their thing – it will still be in place for twenty more years, effectively locking us in.

One of the aspects of TTIP that has seen strong opposition is the immense power it gives to big business. Part of the deal is the Investor State Dispute Settlement (ISDS) mechanism. This gives companies the power to sue governments if they feel a government policy is causing a loss of profit, or will cause them to lose profit in the future.

The European Commission says it’s great for small businesses – but the average cost of a case is $8 million, and your average small business probably can’t find that amount of cash, let alone risk it. Oh, and then there’s the whole question of democracy.

ISDS is already in place in other trade agreements around the world, with cases that illustrate how dire the mechanism  is. Take the American company Lone Pine that’s suing Canada for their ban on fracking in Quebec.

And that’s just what we know

The deal itself may be sketchy, and the process hasn’t been very transparent. It’s all been happening behind closed doors, and it wasn’t until Greenpeace leaked some of the negotiation documents earlier this month that it could face proper public scrutiny.

It does look as though TTIP, if it goes through, could become just another modern trade agreement handing power to big business at the expense of people and the planet.

Linkedin
RELATED ARTICLES
OTHER ARTICLES
Shaunak Sen discusses his documentary chronicling an ad hoc hospital’s efforts to protect the city’s birds of prey.
The photographer reflects on a decade which saw the rise of MTV and the flourishing of new genres.
After being subject to racism growing up, Kavi Pujara’s photo series allowed him to reconnect with and reimagine his hometown.
The hate Just Stop Oil faced after throwing soup over a Van Gough painting has been immense. Here, they explain why it won’t deter them.
A centuries-old tradition is offering families a way to honour the deceased, reports Arbab Ali.
A new photo series documents tribes preserving the environment through simple, sustainable practices in central Asia.