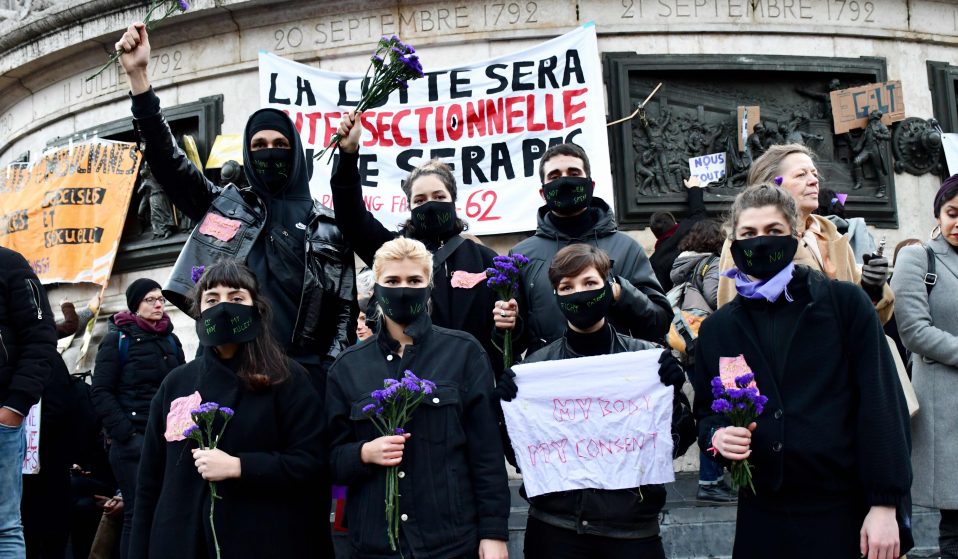 Around 30,000 people took to the streets of Paris on Saturday for a rally spurred by #NousToutes (#UsAll) – the feminist movement calling for an end to all forms of violence against women.

Around 30,000 people took to the streets of Paris on Saturday for a rally spurred by #NousToutes (#UsAll) – the feminist movement calling for an end to all forms of violence against women.

The UN’s International Day for the Elimination of Violence Against Women is on Sunday November 25th, but it was the day before that that the real feminist celebration took place in France. On Saturday, tens of thousands marched from Opéra to Place de la République in central Paris, with chants demanding justice and an end to aggressors’ impunity.

The protest had been planned for several months and gained momentum online through the #NousToutes hashtag, France’s response to #MeToo. The American movement has undoubtedly provoked a reaction in French society: a report released by the French government revealed that the number of sexual harassment cases recorded by the police increased by 23 per cent since it started causing waves in the country in October 2017.

France remains on a slow course when it comes to making progress with gender disparity and violence against women. The same government report disclosed that 250 women are raped each day in France, one woman out of three has already experienced sexual harassment at her workplace, and around 220,000 women are victims of physical violence by their spouse or ex-companion each year.

This high level of domestic violence in the country urged women of all ages to stand united on Saturday. This included Claudine, a 70-year-old activist. “I am a feminist not since my birth but since 1968, because despite our constant battles, there are still women suffering from violence who are often killed,” she told me. “There are murders which happen in areas of conflict, but also a lot at home.” 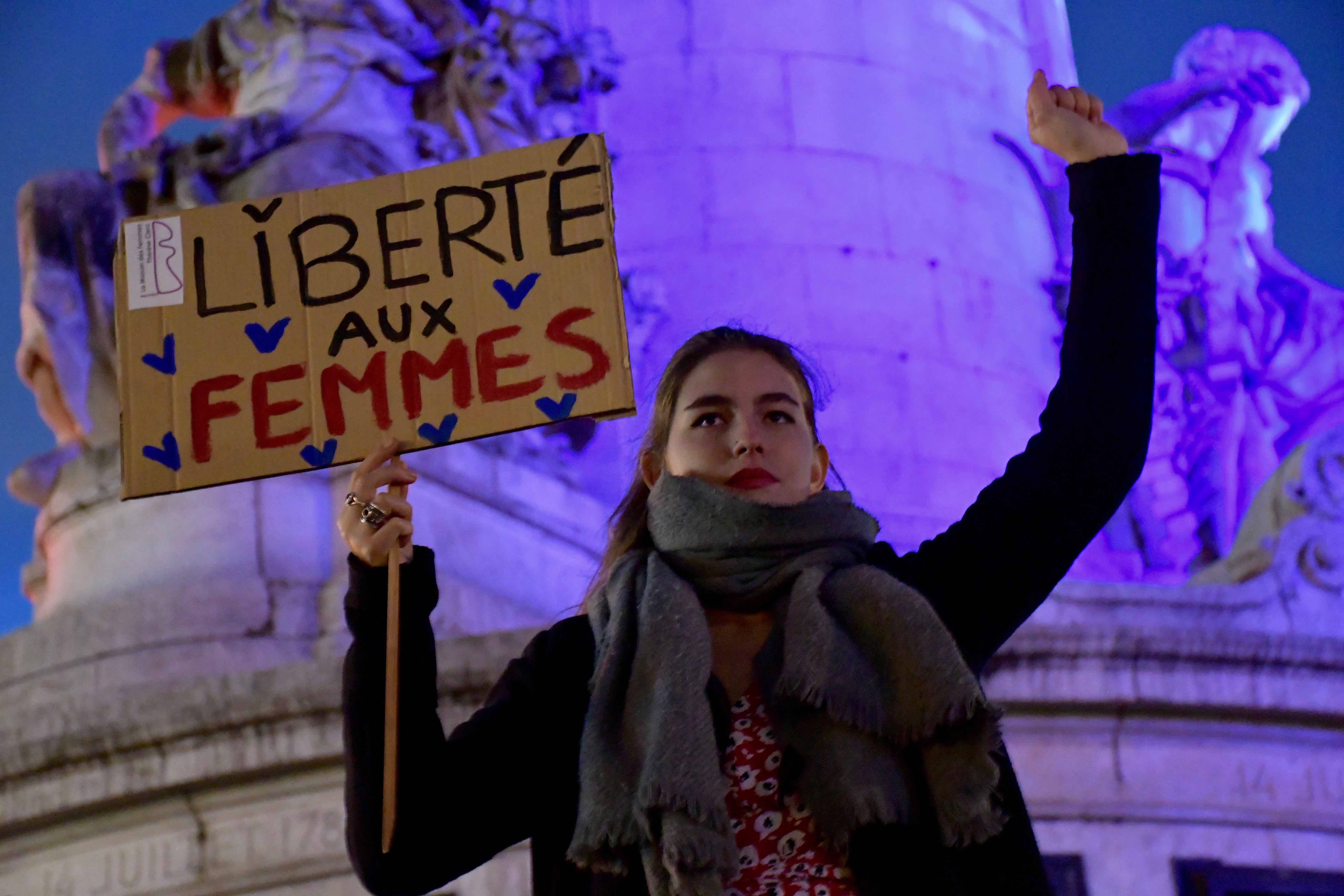 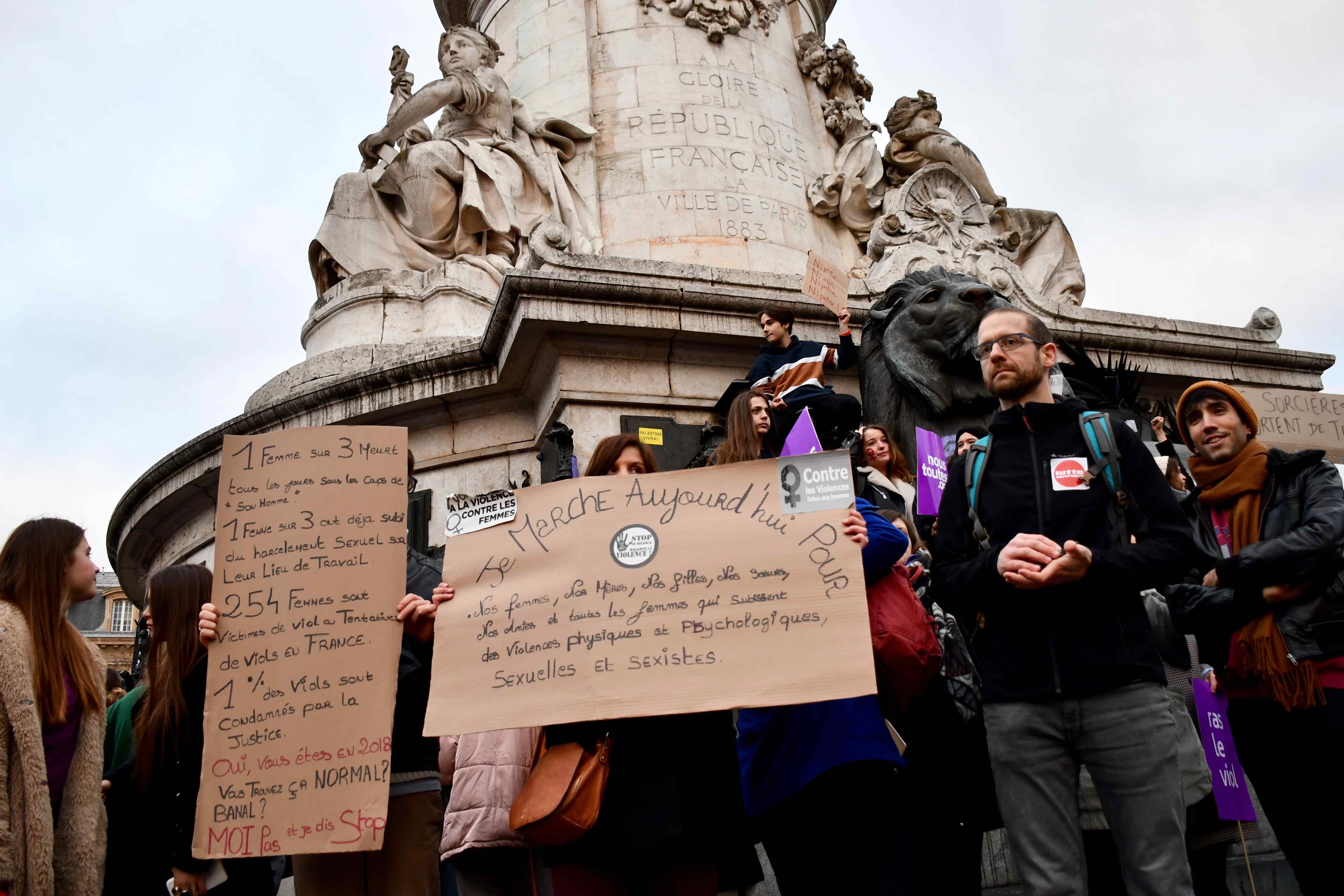 Another protestor, Nathalie, who was distributing flyers for #NousToutes with a list of numbers to call if a case of sexual harassment occurs, said: “We have a real problem in France where we [women] struggle to detect and know what violence means – that really needs to be taught to people. We also have difficulty knowing how to react in front of a case of violence. Normally it should be the government doing campaigns of prevention, detection and forming professionals, but since it isn’t we are raising awareness here in this protest.”

It was a strange day in Paris, as the peaceful march was juxtaposed with the violent protests by the ‘Gilets Jaunes’ (Yellow Vests) demonstrators, which was taking place further west around the Champs Élysées. Initially sparked by a rise in fuel taxes, the ‘Gilets Jaunes’ protests have grown into an anti-Macron movement, where disenfranchised citizens mix with rioters who are burning cars and throwing stones at police – a completely different atmosphere from the events around République.

But the 5,000 yellow vests would not outshine the tidal wave of purple that covered the eastern streets of Paris. The choice to associate the protest with this colour by the #NousToutes citizen collective was not aesthetic but symbolic, due to purple’s long association with feminist movements dating back from the Suffragette period more than a century ago. 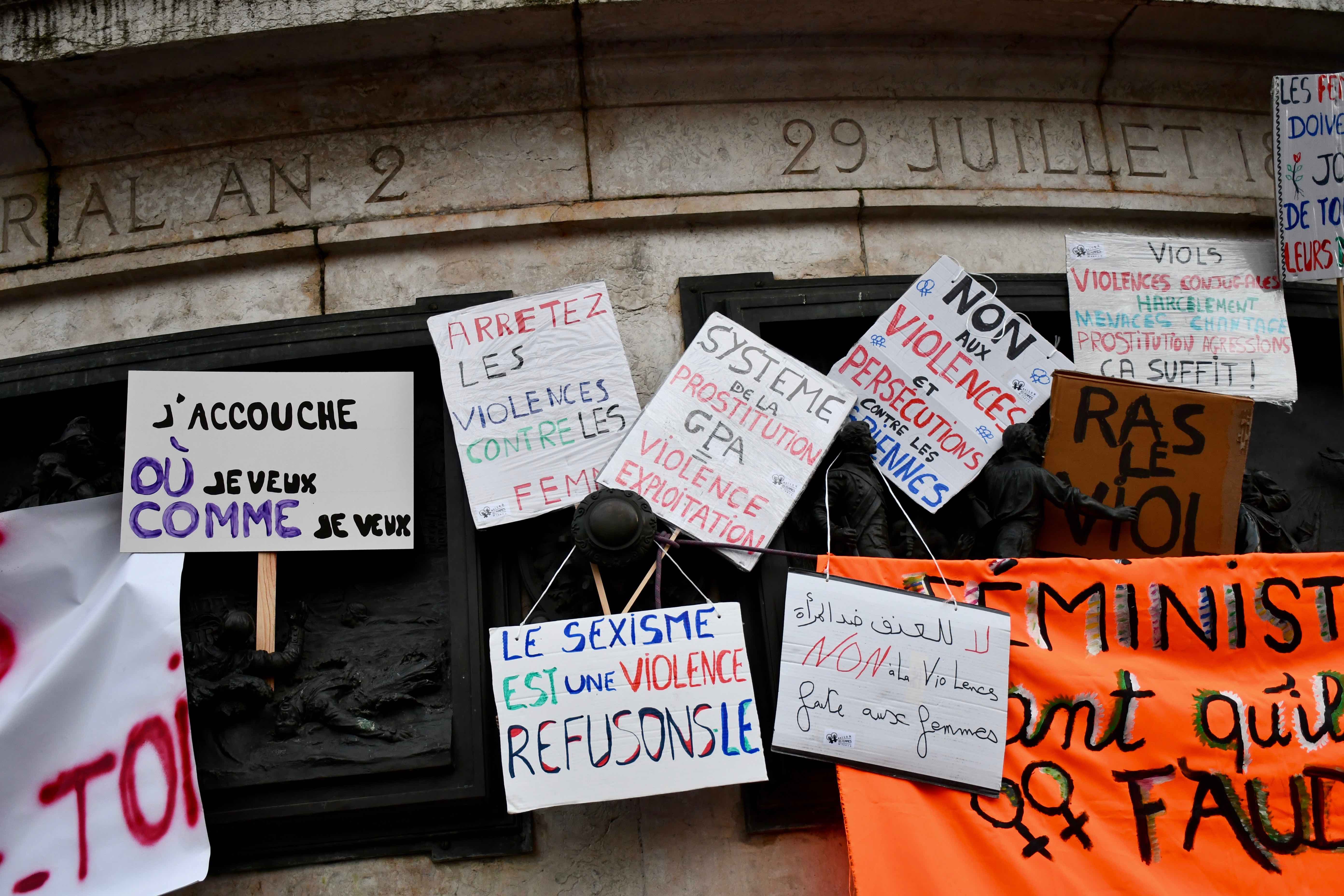 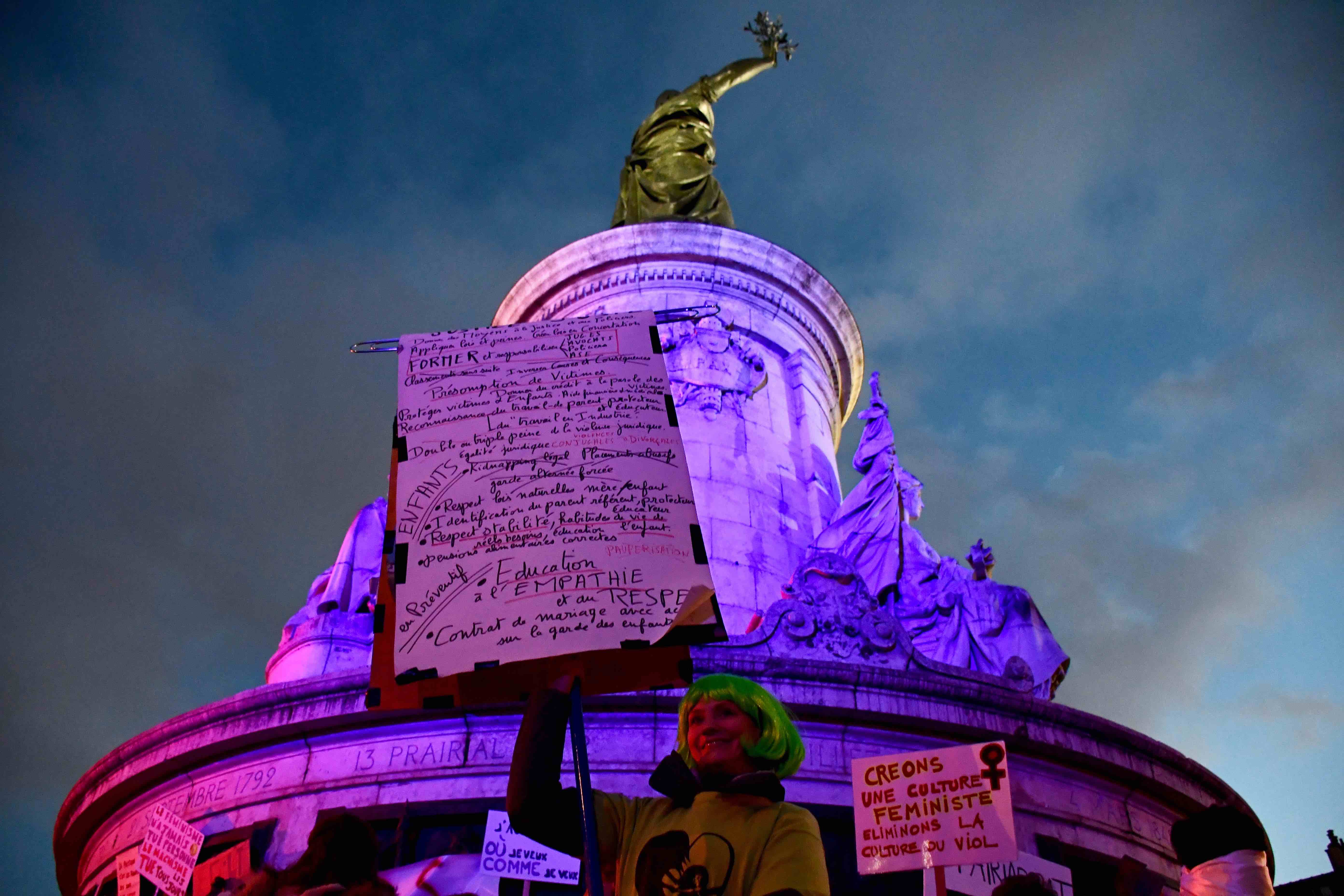 The peaceful protest gained attention even before it began, as more than 400 female journalists published an editorial piece earlier that morning. “We, women journalists, will be part of the movement,” they wrote. “It is no longer possible to assert this truth: every day, in France, women are harassed, threatened, raped, killed, because they are women.”

But beyond tackling a range of issues relating to women’s rights, such as genital mutilation and abortion, the demonstration also raised awareness about transphobia and the danger that trans sex workers face – particularly relevant following the murder of Peruvian sex worker Vanessa Campos in Paris last summer.

For protestor Emilia, a Mexican woman now living in Paris, the fact that she lives in a supposedly progressive, western society is no reason to stop fighting for rights and dignity: “We need to address all the things that are intangible and issues that we don’t think about every day to continue making progress.”

As the demonstration concluded around Place de la République – the Paris square renowned for protests – young people waved signs such as “When she talks, I hear a revolution,” or “The battle will be intersectional.” But as others hung banners on the statues with frightening facts about the number of ongoing persecutions nationwide, it was clear to everyone present: the fight was far from over. 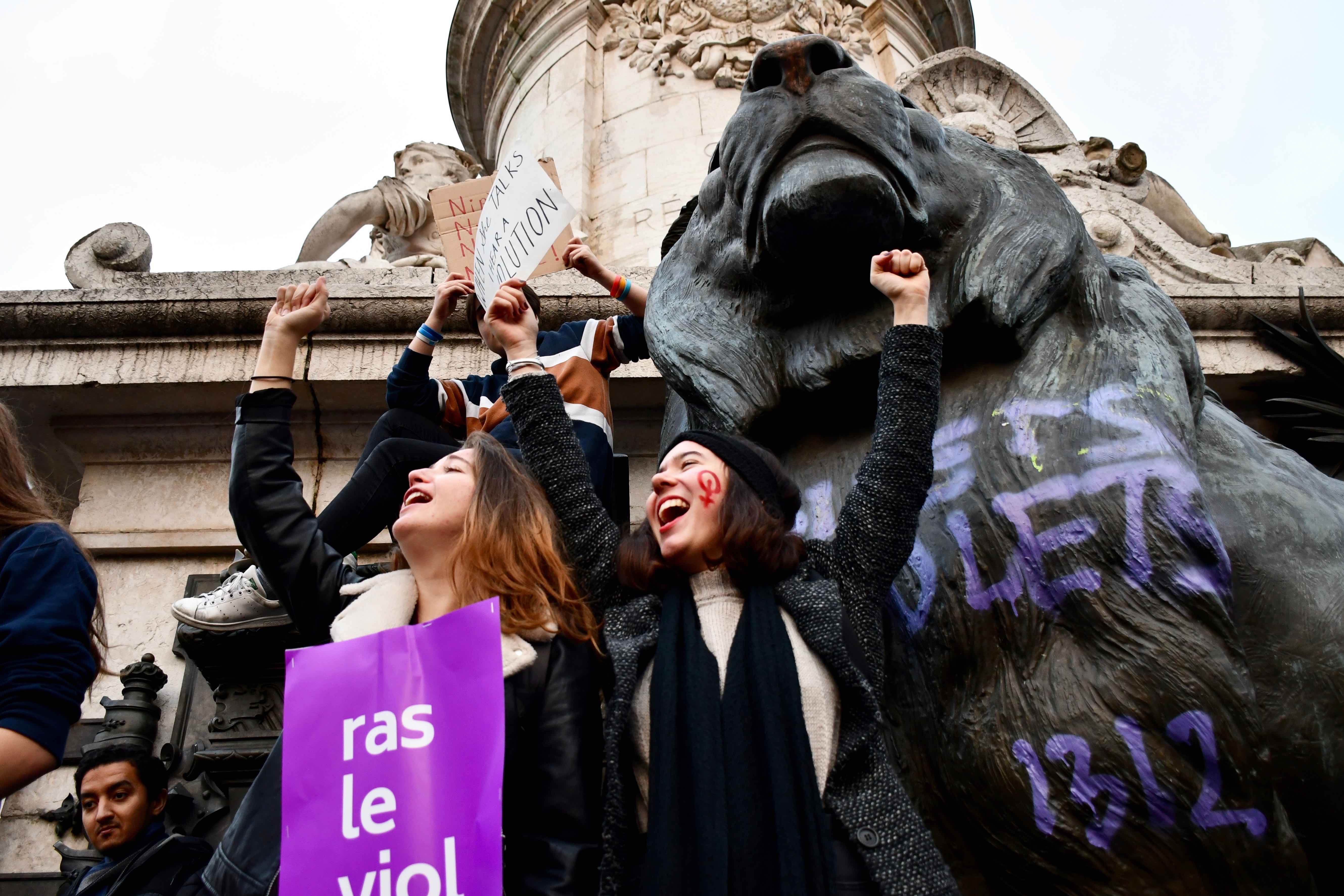 Linkedin
RELATED ARTICLES
OTHER ARTICLES
Leading art critic Robert Storr reflects on the photographers – from Seydou Keïta, to Malick Sidibé, to Carrie Mae Weems – who helped to transform and redefine the medium.
Photographer Yan Morvan revisits a radical moment in history, which saw the emergence of a fiercely-rebellious spirit among the UK‘s youth.
In 1984, Martin Shakeshaft set out to document the miner’s strike as it really happened, using his photography as a tool for activism.
The photographer reflects on building trust with his subjects and using the street as his studio.
The internet furore surrounding a certain NY-based furniture designer should make us question whether condemning people in the harshest possible terms harms more than it helps.
Ahead of the policing bill reaching its final stages in the Lords, protestors came together to rally against the legislation.