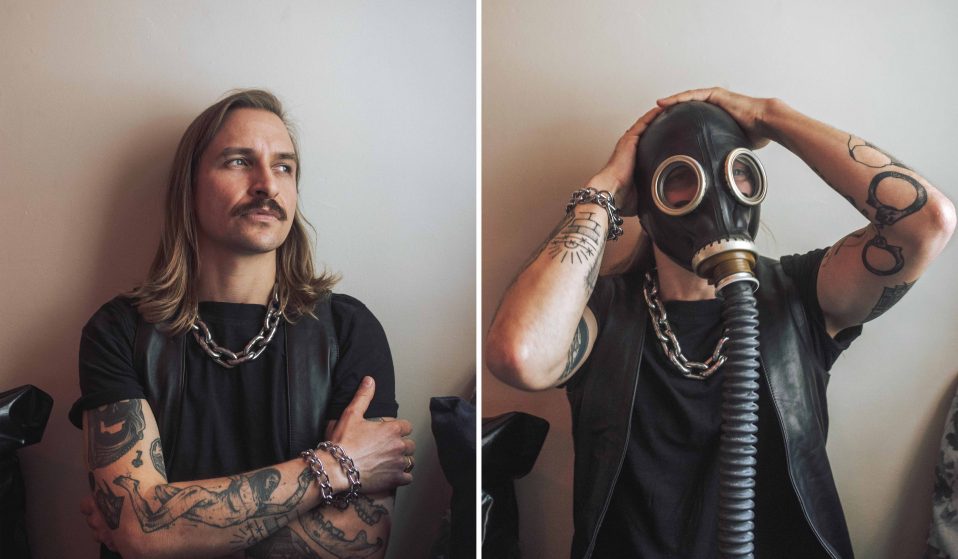 Text By Will Coldwell

The capital’s nightlife is under constant threat, but a new wave of DIY fetish parties is fighting back. Writer Will Coldwell takes a trip to the dungeons.

The capital’s nightlife is under constant threat, but a new wave of DIY fetish parties is fighting back. Writer Will Coldwell takes a trip to the dungeons.

Behind a PVC strip curtain covering the entrance of an unmarked warehouse in east London, Klub Verboten is starting to warm up. Techno echoes around the gaping industrial space, while the crowd – donned in leather harnesses, latex and rubber, dance and mingle in the dim light while abstract projections colour the walls. A narrow corridor leads into a second space, where dungeon furniture is placed around the bare room like exhibits in a modern art exhibition. On one, a woman is already being spanked, artfully, while a leather swing awaits ominously nearby, flushed in the red glow of a neon light beside it spelling out the words: “nothing but love.”

Moving between the rooms, I run into the party’s organiser, Karl, who’s wearing a military hat and leather jacket with a heavy metal chain around his neck. Founded two years ago, Klub Verboten – or “London’s contemporary fetish club” – is part of a new generation of events in the capital catering to a growing desire for parties that create space for sexual expression and exploration. Since its launch – and despite being a selective, members-only community – it has rapidly built a following for itself. Tonight, Karl tells me, with a warm German accent, “is their highest production event yet.”

“I never thought we could get to this stage,” he says. “We only accept a third of everyone that applies as a member, but we’ve been selling out almost every night. It’s a lot, it’s really a lot, and we have way more to come.” 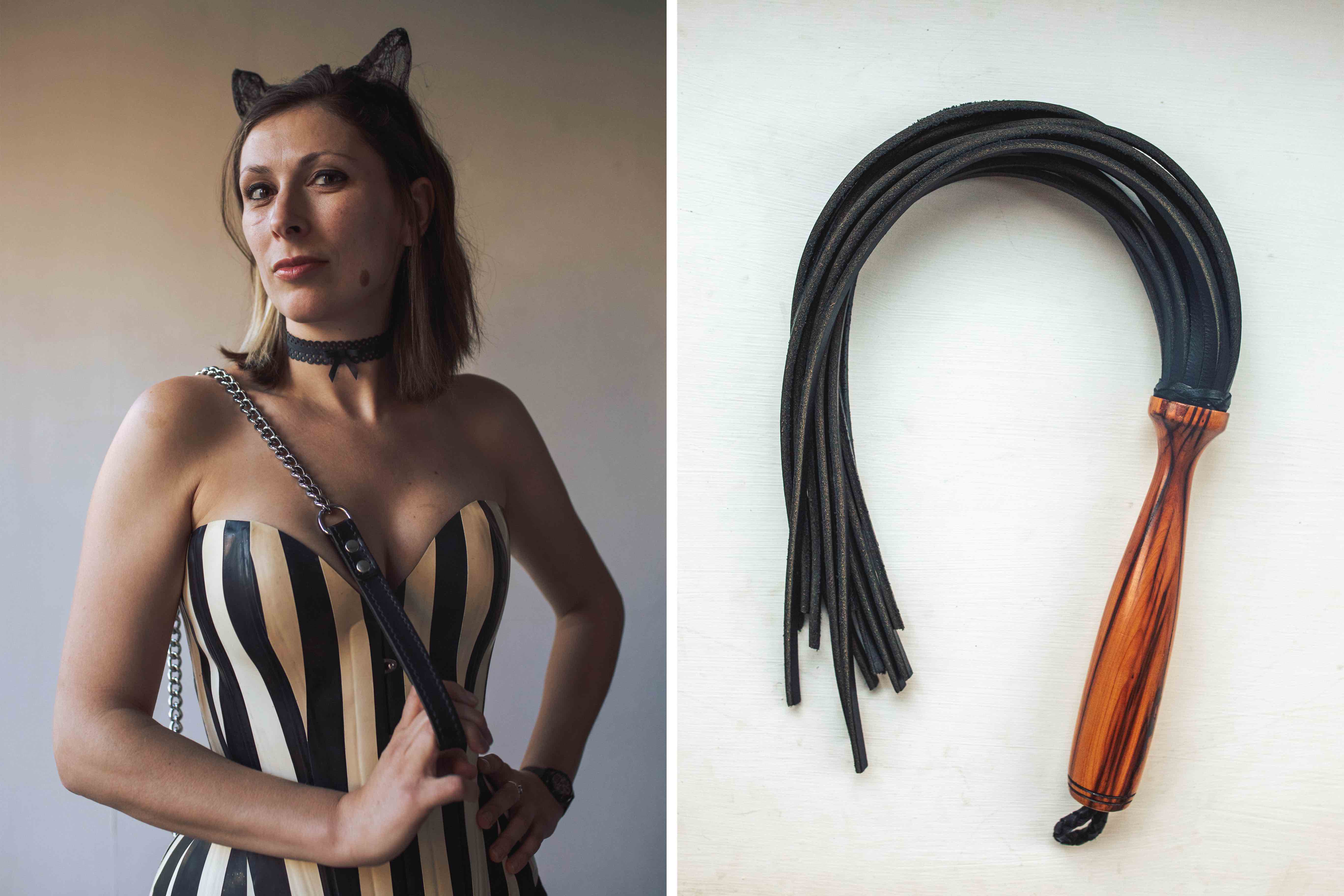 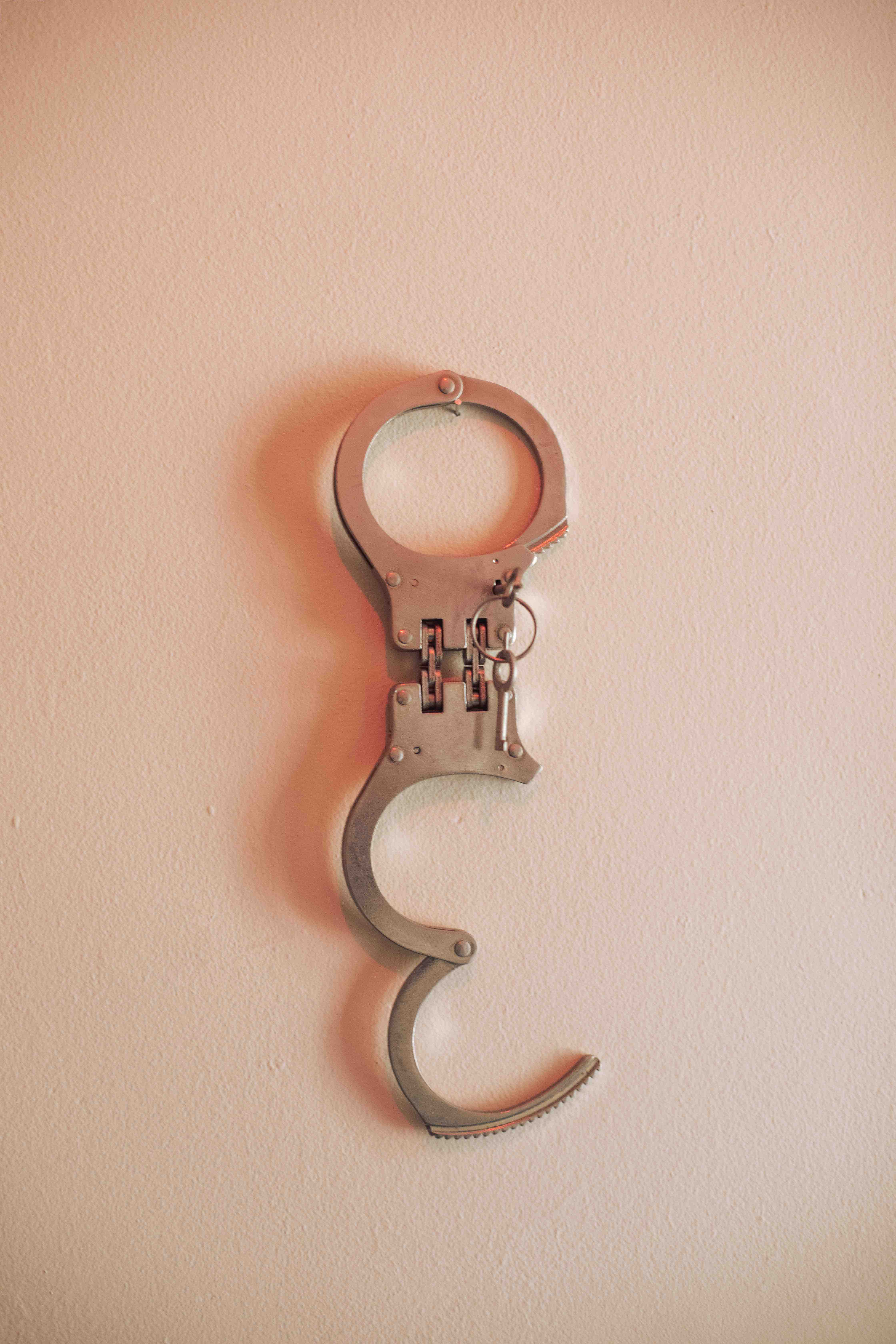 Karl founded Klub Verboten to bridge the gap between techno nights and fetish parties, creating an event that evokes the kind of permissiveness that is commonplace in German nightlife, yet remains lacking in London.

“One thing that was lacking for me, coming from Berlin, was it was all a bit restricted and divided in London,” he says. “You’d have to split up from your friends; some would go to Torture Garden and others would go to a normal techno night.”

This sentiment is apparent from people I speak to during the night. I meet one fetish wear designer who is pleased to have found an event where music is taken more seriously; Torture Garden – Europe’s largest fetish club, which serves as an introduction to the scene for many – doesn’t quite cut it for the techno crowd. In the queue to the toilets, a woman with nipple tassels is discussing the night with a man in a leather kilt. Again, she’d been to Torture Garden and Killing Kittens (a more “glamorous” styled sex party geared to the straight crowd), but wanted to try something new.

“I think it’s just a natural progression,” says Karl. “Torture Garden has been going for such a long time but it was starting to feel, to me, a bit dated, the music hadn’t changed for 15-20 years. People might like it, but for my taste, it was too much like a bit of a fairytale.”

Drawing on his background as a video technician, Karl aims to create a multi-sensory event with a modern edge, playing with a sense of rawness and intensity to evoke excitement.

“I think with modern technology, there are huge things you can do with lighting,” he says. “Drawing those aspects in for a night you have a lot of tools to do something visually and aurally pleasing, and create this thing where someone walks through the door and instantly feels a bit uncomfortable under the skin. For me, this is what brings a night alive.” 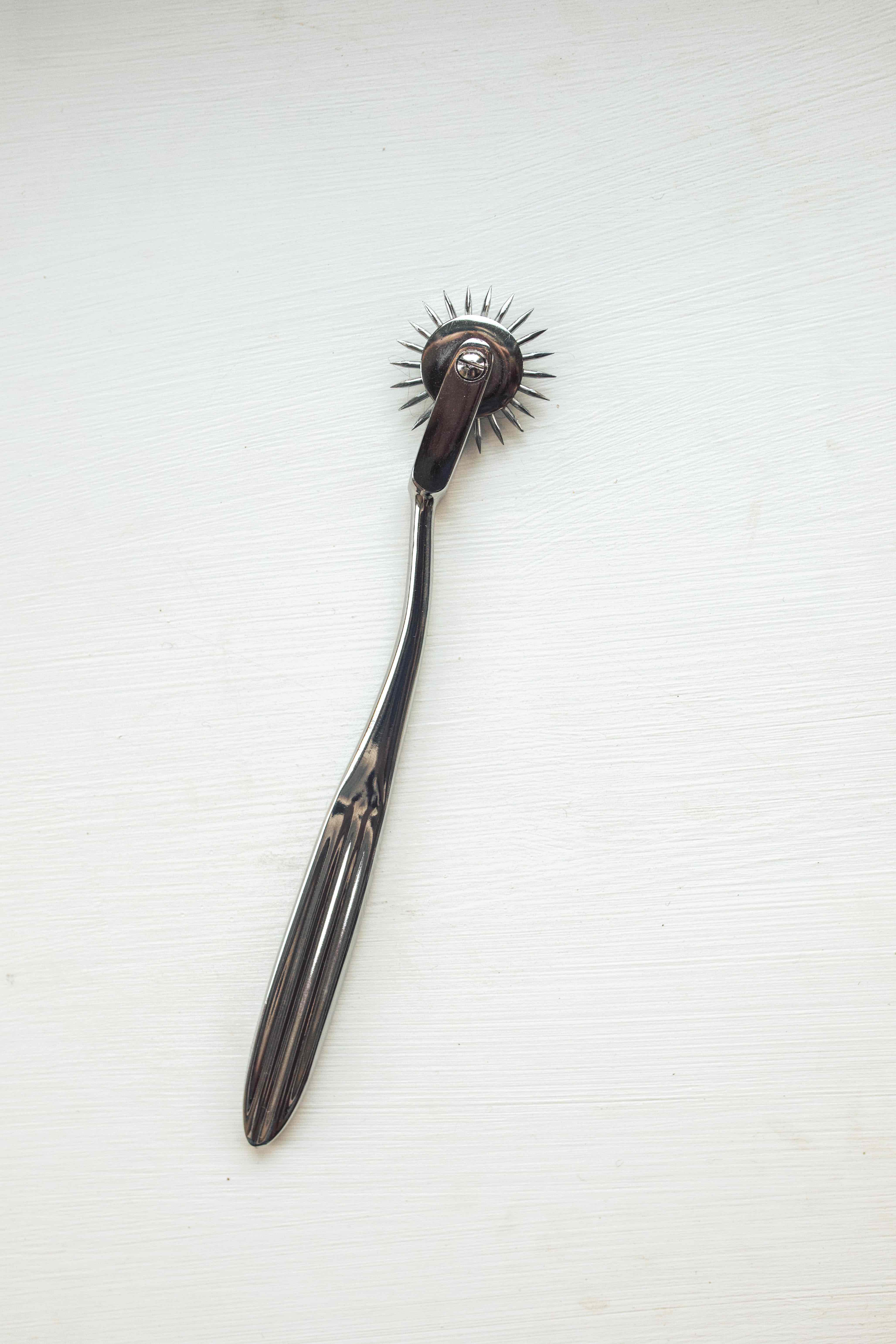 Klub Verboten is not the only sex party to emerge in London beyond the bigger, long-running events like Torture Garden, Killing Kittens and Kinky Salon (a colourful and particularly body-positive party that encourages costume and playfulness to deconstruct the hierarchies often found at sex clubs).

Business partners Pierre, 33, and Hannah Bea, 32, who work in digital marketing and event production respectively, started Slap Stick Club – a bi-monthly party – just over two years ago to create a smaller, informal event that combined play, fetish workshops and socialising. Though they remain longtime fans of nights like Torture Garden and Antichrist, they wanted to create an event that came with less pressure (and, crucially, fewer queues for the dungeon equipment). “While the big events are good to meet people and interact with, to actually practice fetish it’s not very practical,” says Pierre.

A usual night at Slap Stick Club begins with casual drinks and chit-chat, followed by performances – something like burlesque or rope – then the play starts, with a large dungeon area and a soft area with pillows, cushions and beds for those looking for “sex, or comfort, or you know…group hugs.”

Pierre shares a favourite memory: seeing a dominant, male partner in a couple take the role as sub for the first time. “The man was tied up to a cross and we had four or five girls spanking him and mistreating him. He absolutely loved it…it was super hot…” He pauses. “But it was also very heartwarming.”

Slap Stick Club, which draws around 50 people to each event, has also seen growing demand.  “We never have an event without new people that are discovering the scene,” says Pierre. “Either through their friends, personal desire… plenty of reasons. But there’s a normalisation of the fetish scene now definitely. And I’m not saying that in a bad way at all – people are seeking out info about the scene and events a lot more casually, which is great.”

One reason why demand outweighs supply is the difficulties of putting on events of this kind, which are perceived as risky by venues. The challenges for licence holders in London have been widely reported, as have the closures of many nightlife venues in recent years. In this context, finding a venue that is willing to accommodate kink and fetish events is a formidable task.

Klub Verboten and Slapstick were originally held at Murder Mile Studios in Clapton until the landlord evicted the people running the studios at short notice in 2017. Both events were left floundering; Klub Verboten (after visiting around 20 possible venues) hopped between a smaller space in North London then another way outside the city (which still didn’t deter its followers). Slapstick found a new venue but have an agreement that they keep its details completely under wraps. Klub Verboten, too, only releases the address of the party to ticket holders on the night.

While these challenges haven’t deterred the emergence of other discreetly promoted DIY events in London (another party I contacted preferred not to speak to the media), others in the scene have been taking matters into their own hands altogether, choosing to self-organise private sex parties with friends.

Katie and Tom (not their real names), are both in their 30s and in a polyamorous relationship. They had been attending some of the existing parties, but gradually realised they wanted to curate the experience specifically to their tastes. As they developed more connections in the scene, they began hosting bespoke gatherings with a group of around 10 friends (and lovers).

“It was a way of introducing new people to our circle who were advocated for, and also a way of making it an experience that didn’t have to end, necessarily…!” they say. “It’s nice to be able to stay in your own environment for longer. It’s also cheaper; it’s good to not have your actions be governed by money.”

They’ve seen a growing number of peers seek out sex parties over the past few years, something they see as part of a wider shift in how young people construct and manage their relationships; non-monogamy is increasingly common among millennials.

“There’s a call for an alternative kind of relationship among the younger generation,” they say. “A desire to not necessarily follow the standard escalator-structure that we’ve been taught is important, (whether that means marriage or babies or job or house), and to explore the options available, so I think that sex parties are an expression of that need for an alternative way to connect.”

Back at Klub Verboten, the party is approaching closing time and attendees are starting to filter off. One group wait in the dark courtyard for a taxi, chokers and latex peeking out from their winter coats; the only hint of the event they had just attended.

While organising the event is a challenge (not least making it profitable), Karl is optimistic about the future for the scene in London, as well as clubs and nightlife in general evolving to become more accommodating of sexual expression.

“The fetish scene has always been a bit of a closed community,” he says. “But it’s breaking down more and more. I think in the future people will just play and have sex at techno parties, it’s just what it is.”

He adds: “We need to give up on the misconceptions. If people like each other, let them like each other. Particularly in a city like London – it has bigger problems to deal with.”

Linkedin
RELATED ARTICLES
OTHER ARTICLES
In her new book, the author explores the country’s housing crisis in human terms and calls for radical action to address a broken system.
Over a dozen Stop Deportation activists locked themselves to each other outside a detention centre to prevent coaches taking those due to be on the Rwanda deportation flight from leaving.
The singer-songwriter discusses her intimate new project – and the advice she’s picked up across a career as one of rock’s leading voices.
In the latest instalment of Photographers in Conversation, the chronicler of raves, protests and beyond explains why he’s drawn to such specifically visceral environments.
Finland-born photographer Sirkka-Liisa Konttinen looks back on her decades-long documentation of life in Northern England.
Freddie Miller’s new series of photographs investigates who today’s trainspotters are and what drives their unfettered enthusiasm.