News & Politics / Instagram’s prison chefs are cooking up a storm 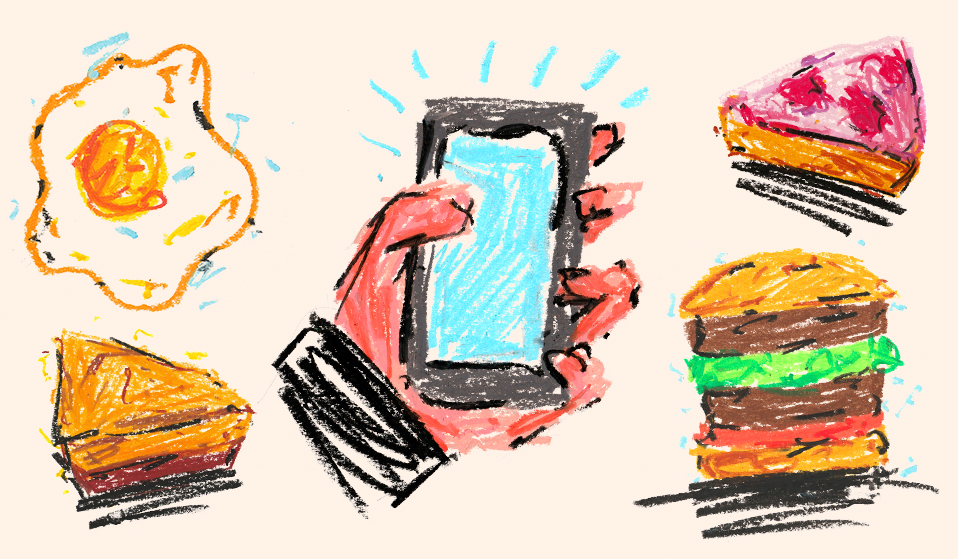 Prisons are failing inmates when it comes to food. But using a kettle and whatever supplies they can find, inmates are getting creative and showcasing some of their most impressive culinary creations to devoted social media followings.

Prisons are failing inmates when it comes to food. But using a kettle and whatever supplies they can find, inmates are getting creative and showcasing some of their most impressive culinary creations to devoted social media followings.

It’s a January evening in lockdown, and Sean* uploads a video of himself preparing dinner to his Instagram account, @uk_jail_truths, from his prison cell. He’s dicing onion, reducing chopped tomatoes, and seasoning a bubbling curry with cumin, turmeric, garam masala, coriander and chilli powder, before throwing tinned spinach and pre-cooked, canteen-foraged chicken into a kettle. He writes in a caption: “I didn’t want to put music over this vid, I want you to hear the sizzling kettle.”

For those watching, and flooding the comments with flame emojis, this type of confinement dinner takes on a new resonance in lockdown. But inmates like Sean have been using Instagram and similar platforms to document their cooking creations long before the pandemic. Indeed, kettle cooking isn’t new to prison, nor is social media. Mobile phones, smuggled in over the walls, sold on by corrupt staff, or dropped off by drone, are rife inside prisons.

Though phones are illegal, “tonnes of prisoners have them and they’ve got mates, co-defendants, cousins, brothers and dads in different prisons – they’re all chatting all the time,” says Chris Atkins a former inmate, whose memoir, A Bit Of A Stretch, documents his time in prison at HMP Wandsworth. There were about “two officers to two hundred people,” Atkins says, “so if you’re caught with a phone you’re in trouble, but people are pretty open about it”. 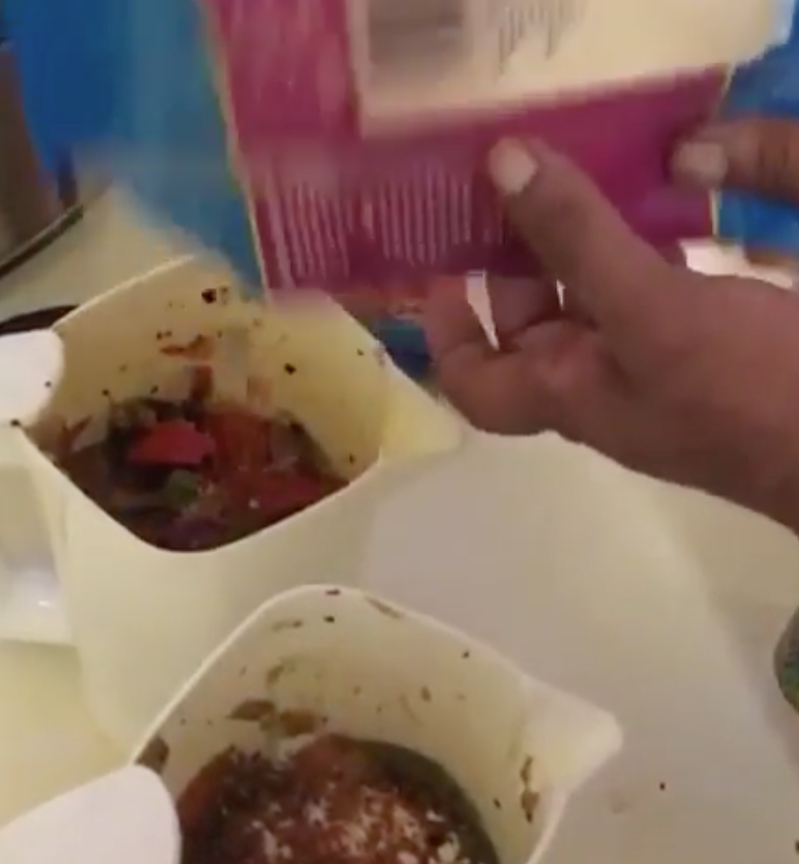 For Dany Hellz Kitchen, one of Instagram’s most famous prison chefs with 28,500 followers, going without a phone is fine – up to a point. “For two months it was okay actually, but more than three months – it’s not possible. After that, I need one,” if only to stay in contact with the “outside, civilised world”. But illegal phones bring problems when you’re caught with them. Dany says he’s spent around a year in isolation out of his six years in prison because of being caught with his phone.

He tells me this via a WhatsApp call, having the night before cooked and uploaded a video of one of his now trademark tagines from his cell outside of Paris. “When I’m out, I’m going to ban some ingredients,” he says, talking about last night’s dinner. “It’s all the same spices [in prison], the same mix.” Tagine, it looks like, will be off the menu.

In Britain, things are much the same for inmates when it comes to kettle cooking – though only a few could imagine being lucky enough to eat home-cooked tagine inside. Atkins found that meals provided by the prison were often “the cheapest shit they could find”. Quality of food is, he says, one of the most popular topics of conversation among inmates: “It was almost like TripAdvisor ratings, people would [request to transfer to] different prisons if they thought the food was going to be better.”

Inmates certainly haven’t held back on the topic of dire prison food. “Worse than dog food,” is how one inmate from HMP Risley described it in a 2019 letter to Inside Time, the national newspaper for inmates. “I thought that one of the basic duties of care of the prison system was to give us enough food to survive on?” bemoans another prisoner in a letter from 2016. Another, from 2011, is simply titled: “Prison food – the silent killer?”

“The food they provide us with inside is tasteless and the quality is bad,” confirms Tom*, who runs the Instagram account, @prison_chef_uk. From inside his cell, he cooks everything from mackerel curry finished with fresh coriander, to fried chicken that sits bubbling and shallow frying in a pan on top of a toaster on full whack. Ingredients are bought from the canteen, sourced from the kitchen, or foraged from meals provided. “I do it because I want to cook my own food,” he says. 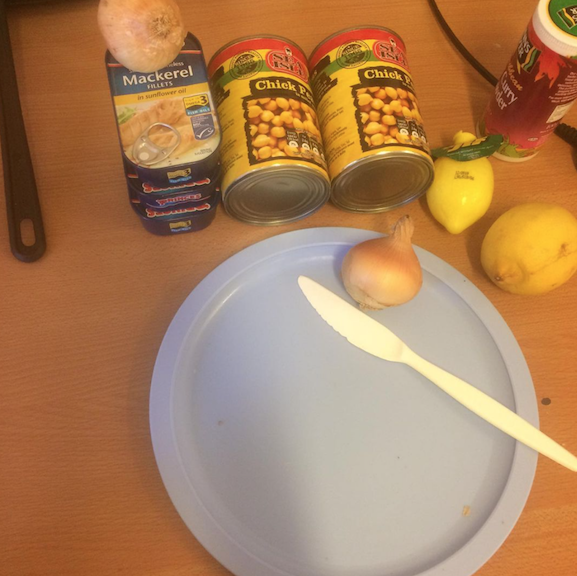 In France, ‘good food’ is central to the culture, and this appears to extend to the prison canteens. “There’s protein. There are vegetables. The taste is not great because it’s bland. But, otherwise, it’s quite, as we say, balanced,” says Dany. He says that his situation is different from Britain’s prison chefs, who are cooking not just for pleasure but also out of necessity. The purpose of prisons are, supposedly, rehabilitation. But it’s hard to imagine rehabilitating on a diet of plain penne pasta and a limp sausage roll.

“One thing I’ve found really frustrating over the years – and I’ve had this said to me by prison governors, people at the Ministry of Justice, and politicians – is that prisoners don’t want healthy food. They just want chips and all that stuff,” says Lucy Vincent, the founder of Food Behind Bars – the UK’s only charity focused on improving the standards of prison life through food. “But actually, from what I’ve seen and having spent a lot of time speaking to prisoners, the opposite is true.”

The budget per prisoner for three meals a day in UK prisons is £2.10 a head. Not a lot, but there is autonomy for a prison’s governor to increase this budget, “if a governor can see that the food being made is good, by a team in the kitchen that’s having a positive impact on prison life,” says Vincent.

Seldom talked about, though, is the positive impact that allowing inmates to cook their own food can have. As Dany puts it, “food is therapy”. He goes onto talk about “making a tagine for the guys, because they’re my mates”. Elsewhere, in a video posted by Ryan*, who runs the account @hmp.chef, it’s breakfast time, and the chef introduces “the cheesiest, cheesiest omelette”, with spicy beans, fried sliced potatoes in an old Quality Street tub, sausages and more, to his fellow inmates. The excitement is real, the “mmms” are non-stop, while someone mutters “scrumptious”. The atmosphere feels jovial.

Vincent points to this sense of community that kettle cooking can create, describing it as “quite a convivial thing” where prisoners will “chip in money to get joint ingredients from the canteen so that they can cook meals together”. 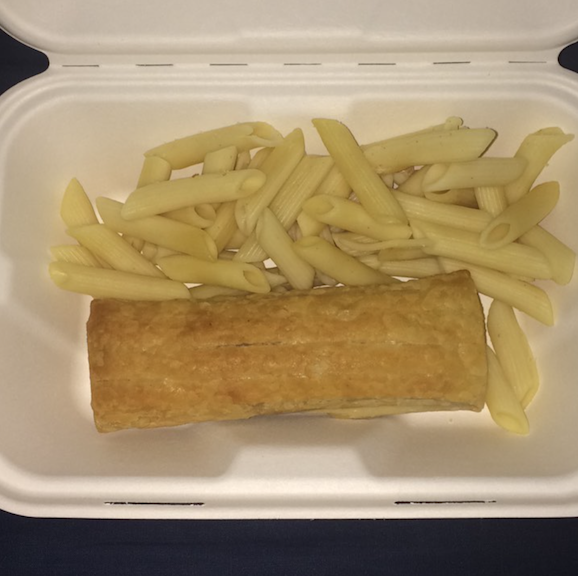 But the benefits of food culture is still a blind spot to a majority of the UK prison system – both literally and figuratively. As Tom surmises: “We cook our own food because it’s a skill that we want to have when we’re released.”

By showing the world these skills in makeshift kitchens, Instagram gives inmates a platform to communicate their creativity. Dany even suggests it has been helping his rehabilitation, saying: “It’s a blessing to be in prison, as I’m a better human being than I was before – none of this would have been possible outside.” Specifically, he’s referring to his huge Instagram account and burgeoning CBD olive oil business he’s set up while inside. “Humans adapt to their environment and I adapt to mine. I’m quite a creative guy by nature.”

The creative outlets of social media and simmering kettle dinners aren’t available to everyone, though. Ryan, who runs one of Britain’s most popular prison chef accounts with almost 25,000 followers, says that in his prison, phones are “not that common, they’re expensive… only if you can afford to buy one, can you get one”.

Kettle cooking relies on buying ingredients from the prison canteen, with larder supplies like tuna or corned beef also functioning as a currency inside. It gives prisoners who can afford kettles a degree of control over what they want to eat. “This can create divides between the people in prison who have nothing and those who are getting money from partners, or parents, to spend on canteen food,” explains Vincent.

Evidently, even behind bars, Britain’s class war exists. Some prisoners simply don’t have the option of cooking a chickpea, spinach, and chicken curry like the ones showcased on Instagram. A pasty and four potatoes from the servery might be their only option. 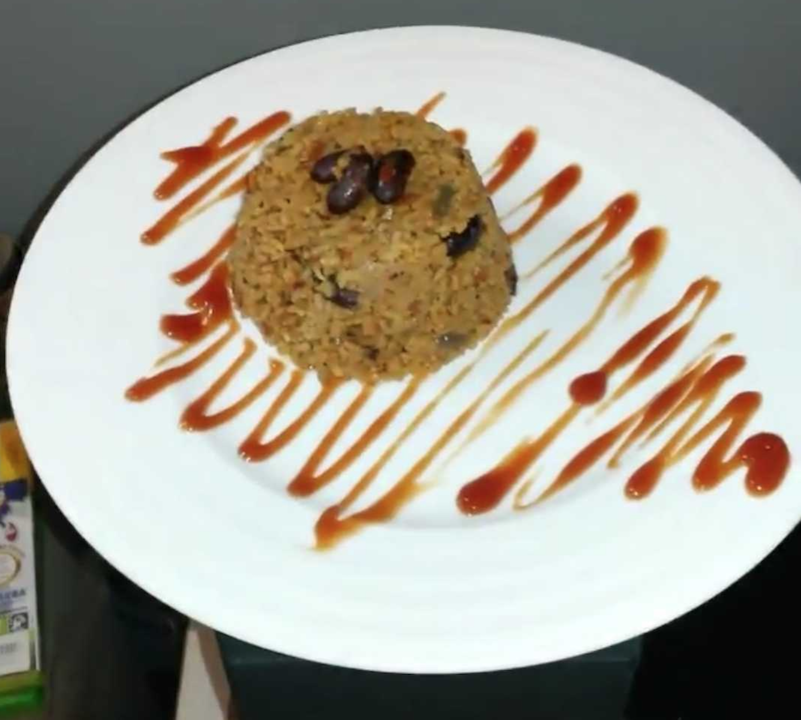 Failing food systems is nothing new for Britain, and the idea that prisoners going hungry can appear more palatable under the guise of punishment, or similarly that school meals could ever be dismissed as “only lunch”, is just another product of a callous government. For prisons, this one-size-fits-all approach isn’t just failing, but actively making things inside worse. During his time inside at HMP Wandsworth, Atkins says that “the food was a source of a huge amount of aggravation, distress and violence – it caused huge problems”.

As Vincent points out, “The requirements for food in a Young Offenders Institute shouldn’t be the same as in an ageing all-female establishment.” For all the mouthwatering meals that end up on their grids, prisons chefs like Sean are also exposing and raising awareness around just how bad the food situation can be behind bars. Below a picture of a forlorn-looking pasty from the prison canteen uploaded to his Instagram account, one user comments: “Grown men can’t survive on this shit,” to which Sean replies: “we tell them this every day”.

That said, there are positive examples as well as negative ones. At HMP Brixton “mealtimes are a really positive part of the day,” says Vincent. Brixton is the highest rated prison for food in the UK according to Inside Time and its overall prison rating has improved alongside its menu.

For all of these Instagram prison chefs, food is more than just fuel. But for many prisoners across Britain, the latter is barely being fulfilled. Until the prison system grasps that fact, inmate’s kettles will continue to boil – to fill them and their Instagram feeds.

Linkedin
RELATED ARTICLES
OTHER ARTICLES
In the last of our dispatches from OFFF Barcelona, Rufus Deuchler and Vincent Gault discuss the future of creative process.
To mark the anniversary of the mass trespass of Kinder Scout, a group of hikers came together with the intent of creating a new, fully inclusive culture for rural spaces.
Satirical culture in the UK routinely protects the powerful and punches down. It’s time people stopped laughing along, writes Elia Cugini.
Over the weekend, London locals came together to resist a pre-planned police raid targeting delivery drivers.
Shifting the focus from the cost of living crisis to tackling obesity while many starve or freeze is farcical and pointless, writes Fatzine founder Gina Tonic.
Following the release of his newly republished 1991 book, Redheads, the American photographer reflects on his celebration of ginger people and their magnetic power.