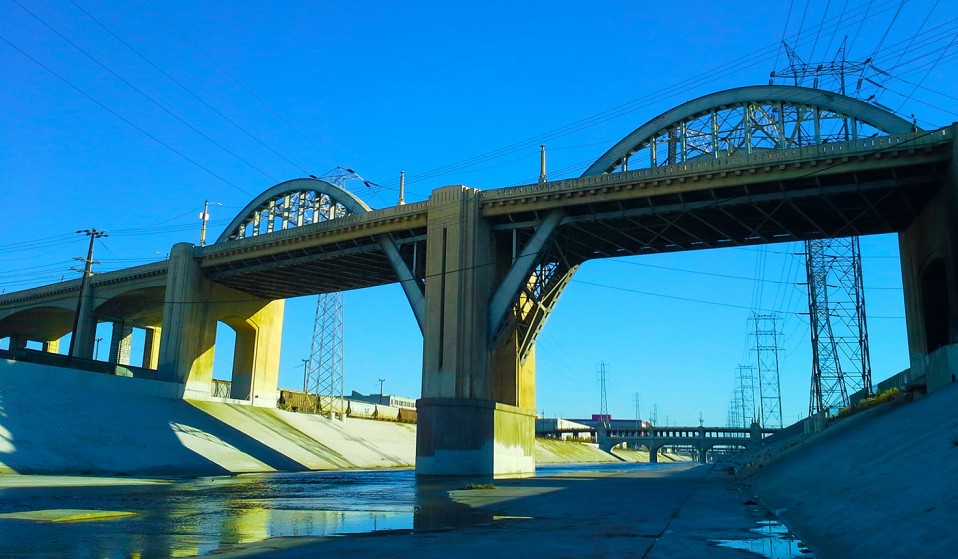 Local landmark, subculture magnet and Hollywood star – Los Angeles' 6th Street Viaduct was many things to many people. Until it was torn down in late January, to be replaced by a space-age bridge straight out of the millennial architect handbook. Residents are worried, while others, including Dogtown legend CR Stecyk, continue to mourn its legacy.

The 6th Street Viaduct is one of the most recognisable bridges in the world, yet you probably didn’t know its name. Located in downtown Los Angeles, it’s been the backdrop for everything from drag-races in Grease to thrilling vehicular pursuits in Terminator 2. Giant mutant ants crawled all over it in 1954’s Them!, and you could speed through its arches in one of the many incarnations of Grand Theft Auto. Hollywood filmmakers requiring a visual shorthand for inner-city California flocked there. Pop chanteuses in need of a vast canvas to jiggle down had its coordinates embedded in their Google Maps. That was all until late January, however, when the 6th Street Viaduct was torn down.

Cursed with a terminal case of alkali silica reaction – or ‘concrete cancer’ for us plebs – the bridge was deemed by city officials as a safety hazard. If a particularly bad earthquake were to strike, the 6th Street Viaduct would crumble in a hot minute. Merely restoring the bridge would also be impossible, chemical rot having spread through the structure’s interior.

It’s the sort of language often used for human beings, all mournful diagnosis and talk of cancer spreading. But it speaks to local Angelenos’ deep-seated love for the bridge – the longest in the city, and stretching across residential communities, industrial warehouses, rail tracks, and the LA river. 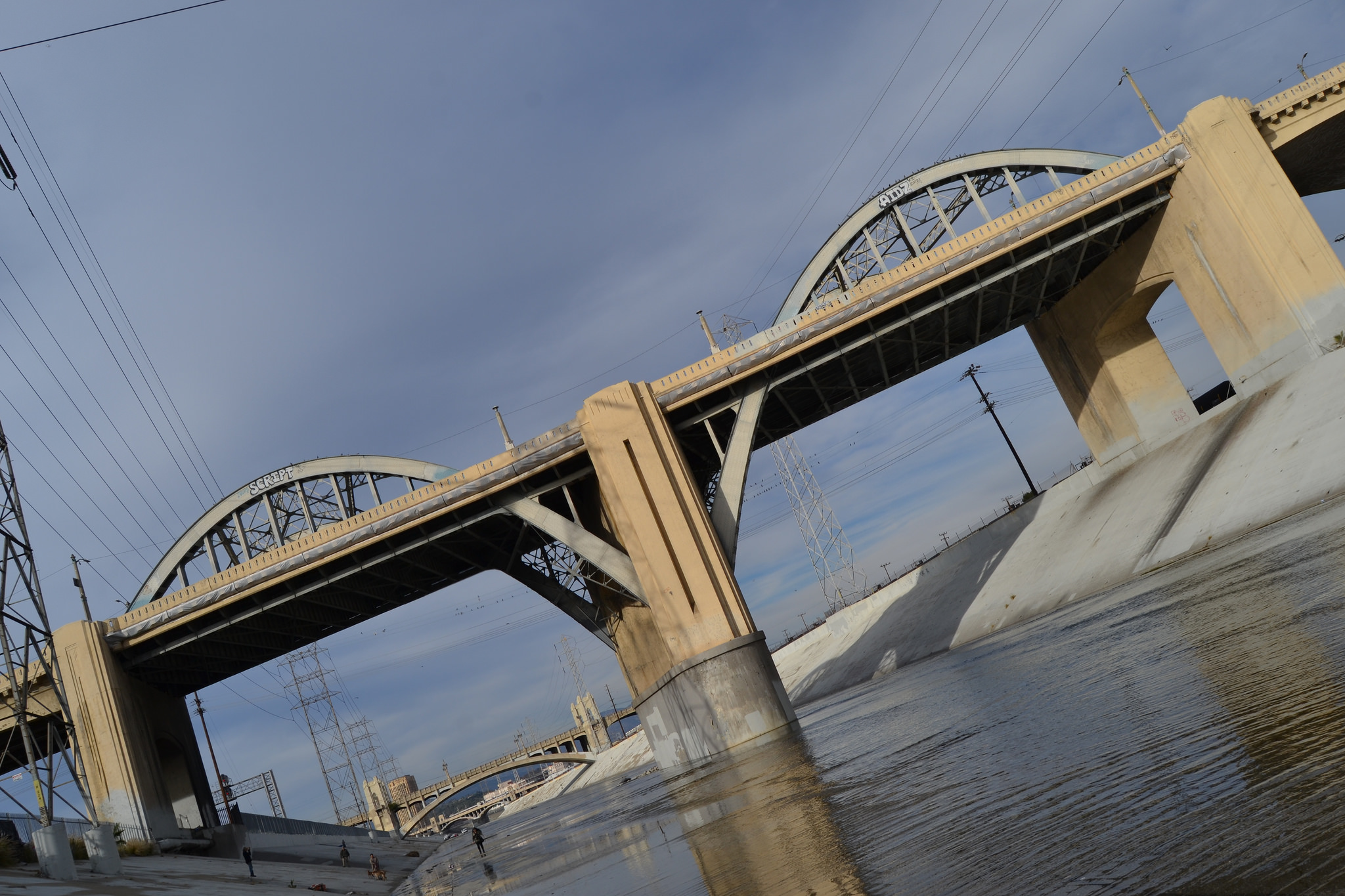 The new bridge, under construction now for a planned opening in 2019, has been described by architects as a “ribbon of light.” Made up of flamboyant arches that resemble space-age squiggles, it’s the sort of wacky architectural design that’s become overly commonplace. So much that something as self-consciously futuristic is rendered almost boring in its incongruity. Surrounded by proposed shops, parks and bicycle access, it will link the local Boyle Heights area with the trendy Arts District. It’s also become a symbol of a culture slowly under threat.

You’re by now more than likely familiar to the tune of iconic landmarks and cultural touchstones being dismantled by building associations and real estate developers – it’s become a tragic testament to our times. But it’s a trend that is especially concerning for the people of Los Angeles.

One major concern is whether those currently living in the area will still be able to afford to do so, come 2019. The new bridge marks an area-wide rejuvenation necessary for safety reasons, but potentially damaging for the actual community itself. California residents already spend more of their monthly income on housing than the rest of the USA, and specifically in downtown, where the bridge was located. The worry is that local businesses and cultures (downtown has a large Latino community) are being slowly driven out. Replaced by, you’ve guessed it, trendy young things with big wallets and flashy new apartments. 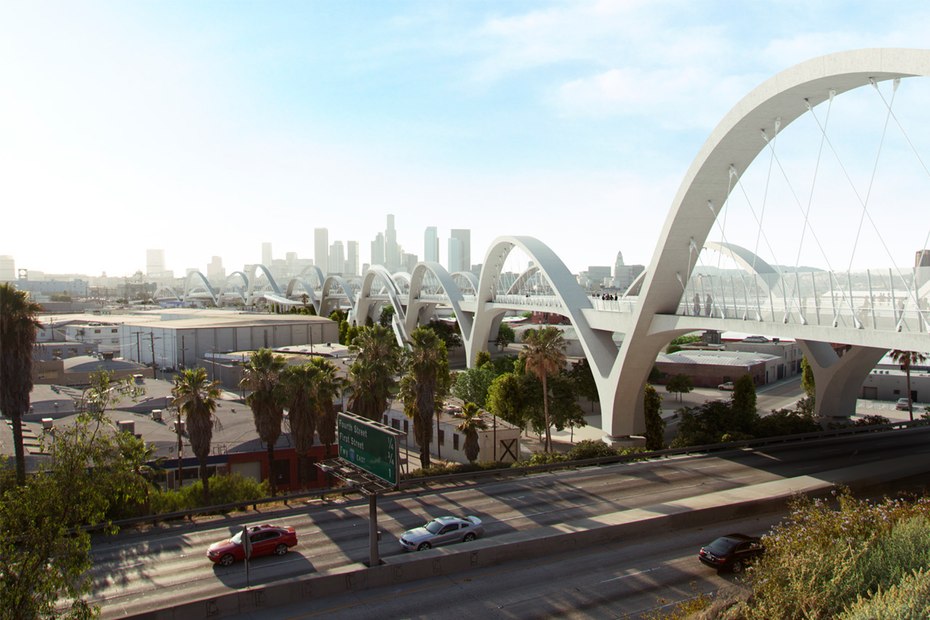 A December article in the The New York Times wrote that a popular band rehearsal space in the area has already been taken over by members’ club Soho House, while a punk rock bar nearby has just been replaced by a yoga studio.

At one point in time, the 6th Street Bridge acted as a convergence point for a host of interesting subcultures. There were regular congregations of skaters, drag races, and vintage car clubs, while teenagers emulated Grease‘s T-Birds by hanging out along the vast concrete creeks beneath it. It has also long been a hub of activism. 1967 saw 250 members of the NAACP Youth Council march through its arches in support of open housing in the area, while in 2014 activists from Occupy LA passed along the bridge while protesting the shooting of 18-year-old Michael Brown in Ferguson, Missouri.

The 6th Street Viaduct was so synonymous with Los Angeles and its diverse history that it came as no surprise that news of its demolition was met with an outpouring of grief. October saw a festival of art and activities take place to celebrate the bridge, while an elaborate farewell party was held in late January which saw hundreds of revellers gather to bid sayonara to an art deco masterpiece. The crowd, piled in on each other on their skateboards and bicycles, riding their Harleys and lowrider vehicles, collectively united in mourning what was being lost, while apprehensive about what the future could have in store.

Dogtown legend CR Stecyk is one of many to have long been enamored of the bridge, documenting its recent closure and demolition. His memories of the area, sent to Huck via email, come complete with his trademark spacey elegance. “The 6th Street Viaduct was a gathering spot situated close to the sites of Yangna, the original indigenous village, the first Spanish Pueblo, and the current federal, state and city command centers. Its graceful concrete spans were crafted from the river’s sand at an on-site factory set up in 1932. When they started beating on it in a frenzy of demolishment, it was ironic to see the newly liberated sandy particulate returning to the river from whence it came.”

“$500m is being spent on replacing one of the most recognisable structures in the world,” he continues. “The old bridge appeared in hundreds of films, television shows and photographs. The Dark Knight Rises, The Mask, To Live and Die in L.A., and Repo Man all shot there. While Kanye West, Bruno Mars, Foo Fighters, Madonna, Pharrell Williams and Kid Rock crooned there. Who will sing the praises of its successor?”

Stecyk’s sadness is echoed by filmmaker and skate photographer Kevin Barnett, a former California resident and devotee of the bridge. “LA is such an odd and spread out city, with very little actual living going on downtown, until fairly recently,” he says. “But having a skyline along a very timeless and instantly recognisable pathway was an odd sort of antidote to that disconnection one so often associates with Los Angeles.”

Barnett no longer lives in LA, but suspects on his return that he will sense an unmistakable void in the city. “It’ll be something more than just a missing street, and greater than just a closed down landmark. It was a unifier of sorts. Something for the born and bred Angeleno and the visiting tourist to share on equal ground.”

Linkedin
RELATED ARTICLES
OTHER ARTICLES
The author discusses her blistering new novel about history, revolution and queer love.
After news broke last week around an expected reversal of the 1973 landmark law that made abortion legal in the US, protestors gathered in the UK in support of American women.
In the latest OFFF Dispatch, the enigmatic designer dives into his process, connecting the dots between his unique and varied creative output.
While protests over abortion rights rage in the US, access to abortion services is still almost nonexistent in parts of the UK.
Over the weekend, London locals came together to resist a pre-planned police raid targeting delivery drivers.
Government plans to make it harder for people to go to university will only entrench inequality.