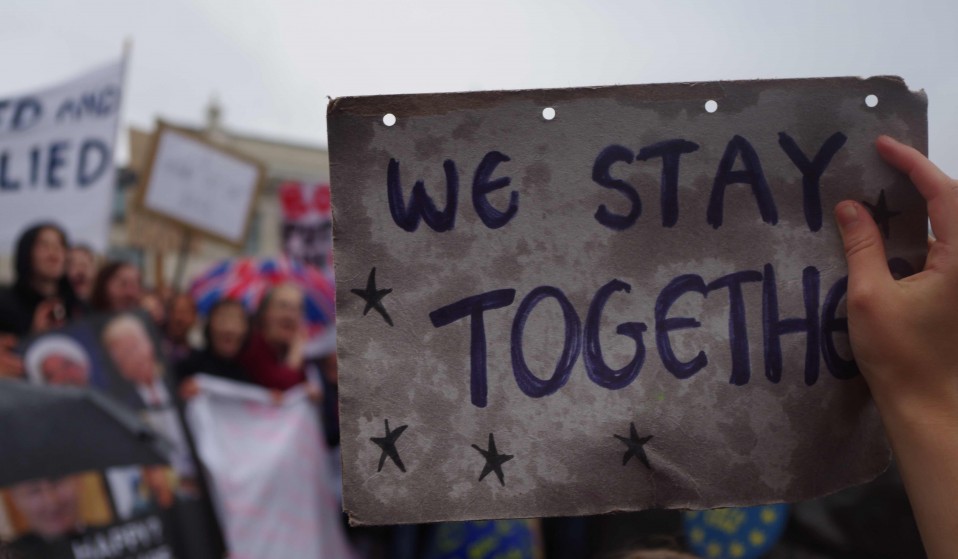 While the United Kingdom may have voted to leave the European Union, London, like Scotland, voted to remain. Thousands marched in the capital to demand that Brexit be halted last night, saying a campaign based on lies and broken promises is an insult to democracy.

While the United Kingdom may have voted to leave the European Union, London, like Scotland, voted to remain. Thousands marched in the capital to demand that Brexit be halted last night, saying a campaign based on lies and broken promises is an insult to democracy.

It’s a damp and grey Tuesday evening in central London, as Trafalgar Square bustles with activity. The rain is lashing down, the police are standing by, and the mood is far from celebratory. It’s unsurprising really, given what’s happened since the United Kingdom England (against the will of Londoners) voted resolutely for Brexit. 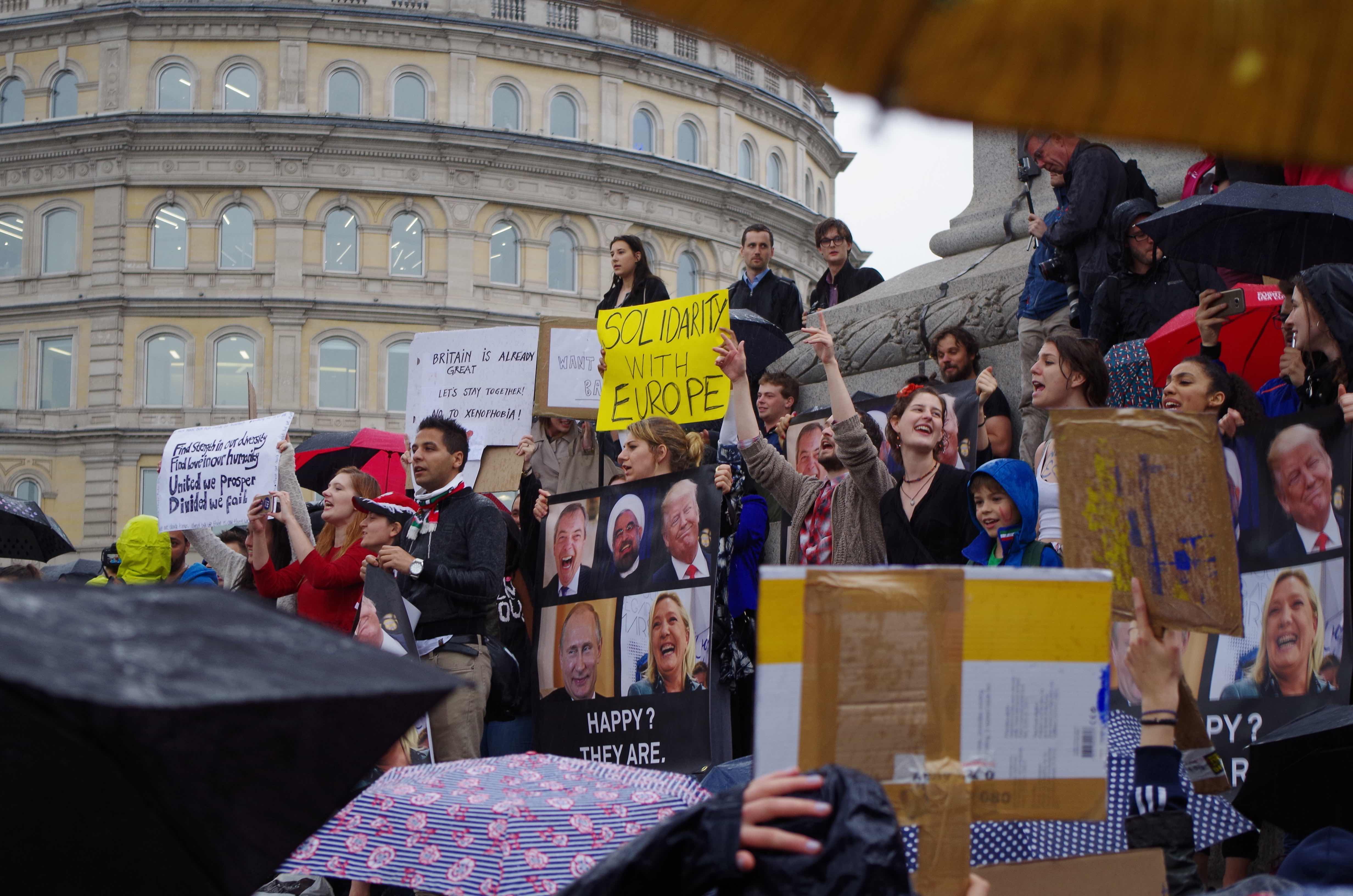 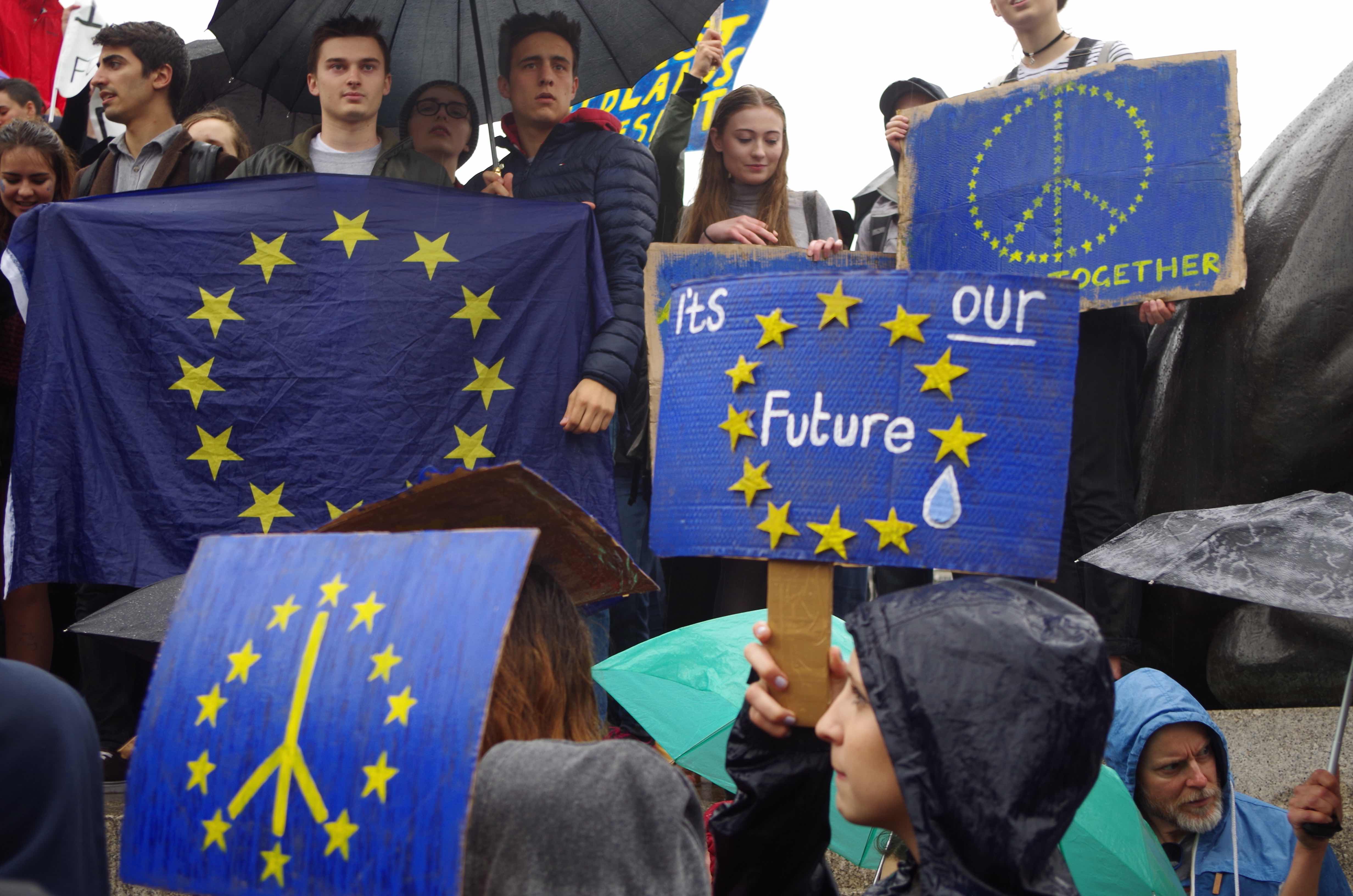 The thousands of people braving the rain are angry: angry at the lies from the likes of Boris Johnson and Nigel Farage, angry at the nation’s decision to leave the European Union that they didn’t make, and angry at the alarms rise in hate crime in the capital and beyond that’s come from a referendum fought on fear.

Many of the crowd have come straight from work, and briefcases and suits jostle with the placards and umbrellas. It feels like a gentler protest, the kind which waits at the traffic lights for the green man before filling the road with thousands of angry voices. The kind that will go on to welcome a Liberal Democrat and a Conservative MP to address them.

As we stand huddled under umbrellas, the atmosphere is sombre. Days of political uncertainty, job losses and far-right rhetoric have taken their toll on this diverse capital city, and despite attempts to cancel this rally, people have come out in force. 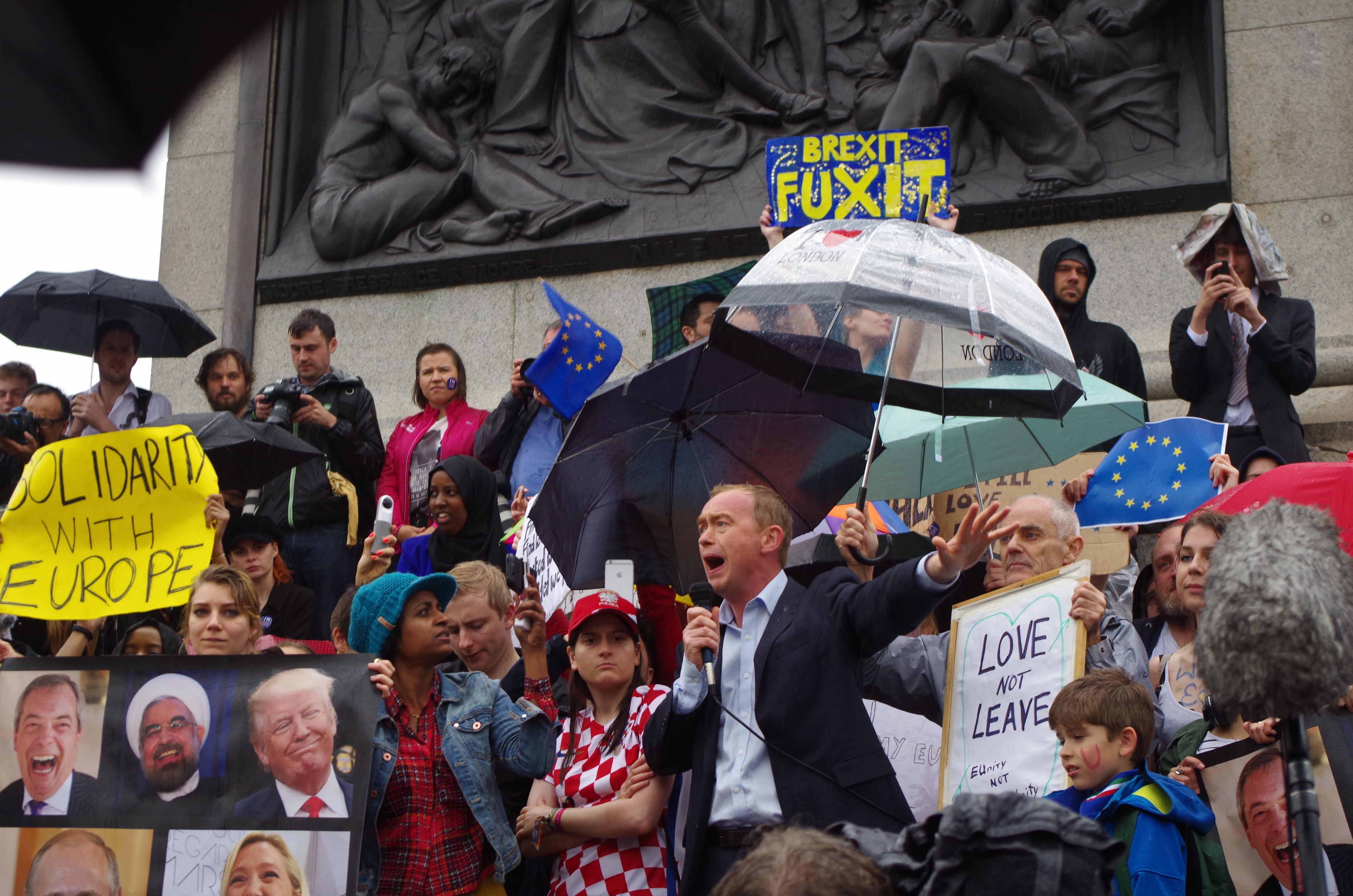 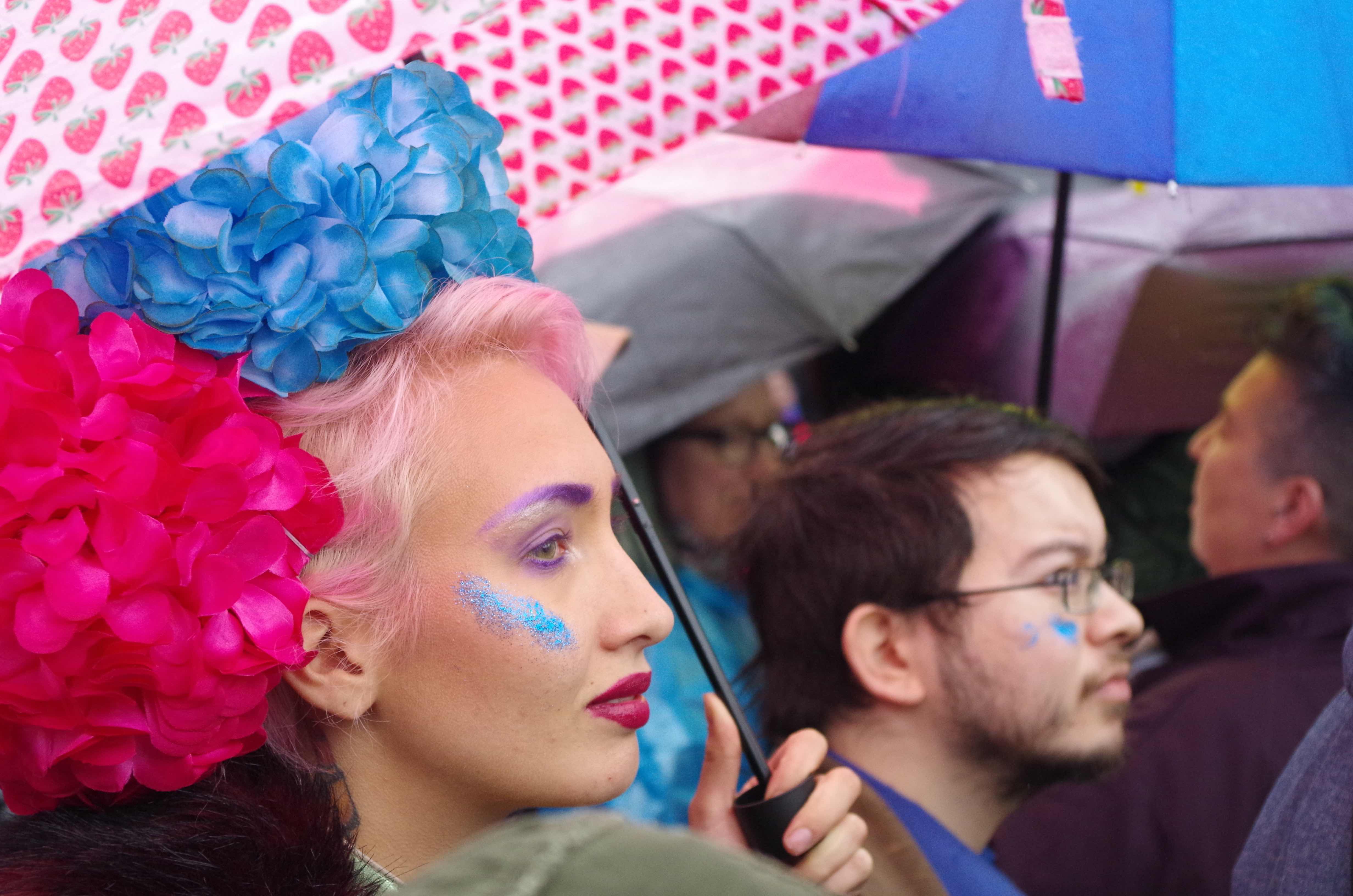 Weaving through the crowd it’s clear we’re young and diverse: hardly surprising given three quarters of 18-24 year olds voted to remain. Frustratingly turnout was as its lowest for this demographic – young people just didn’t turn out to vote. Looking around the plinths and platforms thought I can’t help but think it’s possible that this is the politics my generation recognise – taking to the streets rather than placing trust into crosses and ballot boxes.

Drenched in rain, and with no music, flares or balloons, it is a sombre atmosphere, there is a palpable sense of loss in the crowd. We’re mourning our country’s decision, torn between accepting a democratic decision and desperate to fight the divisive politics that drove it. 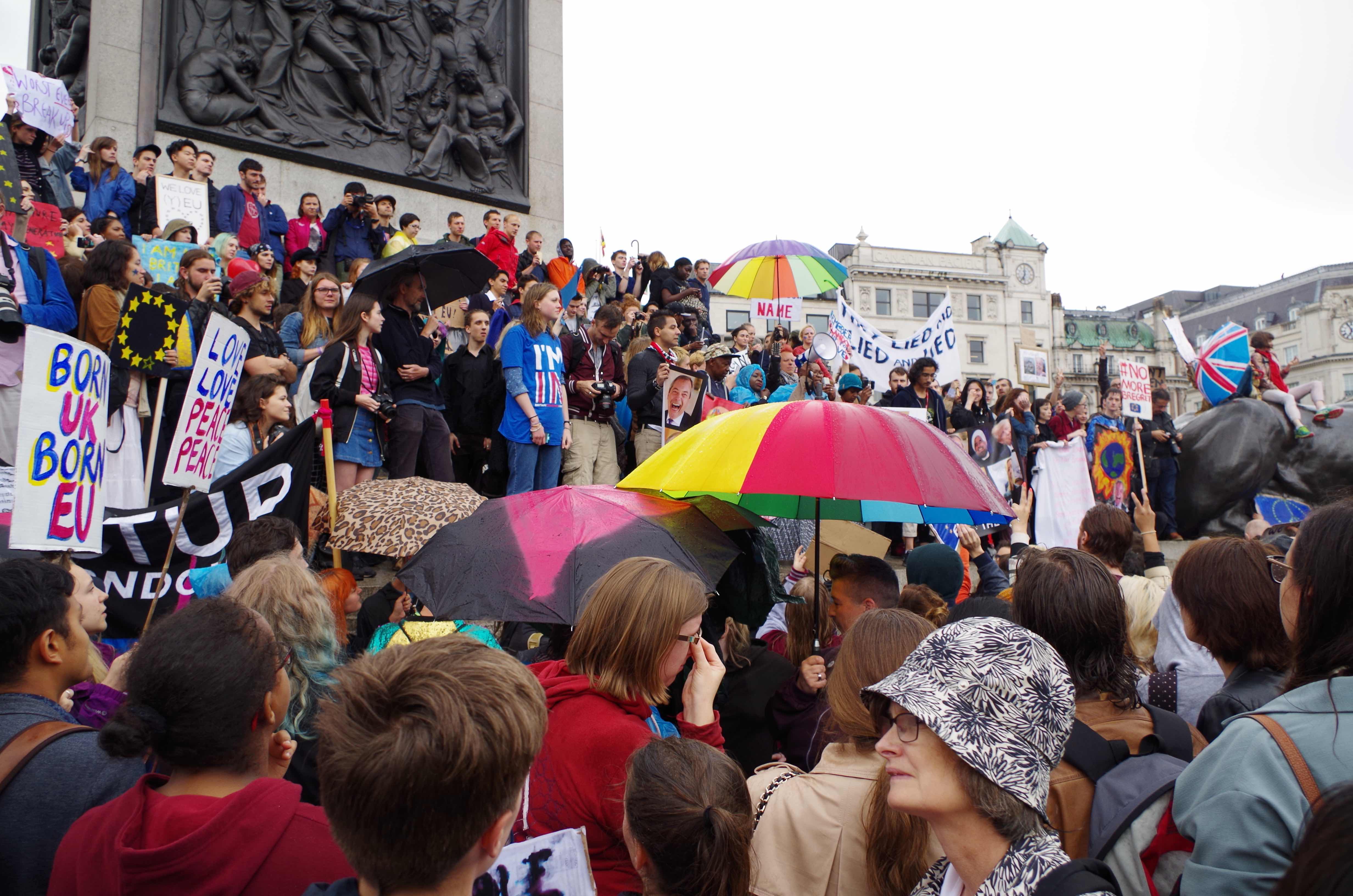 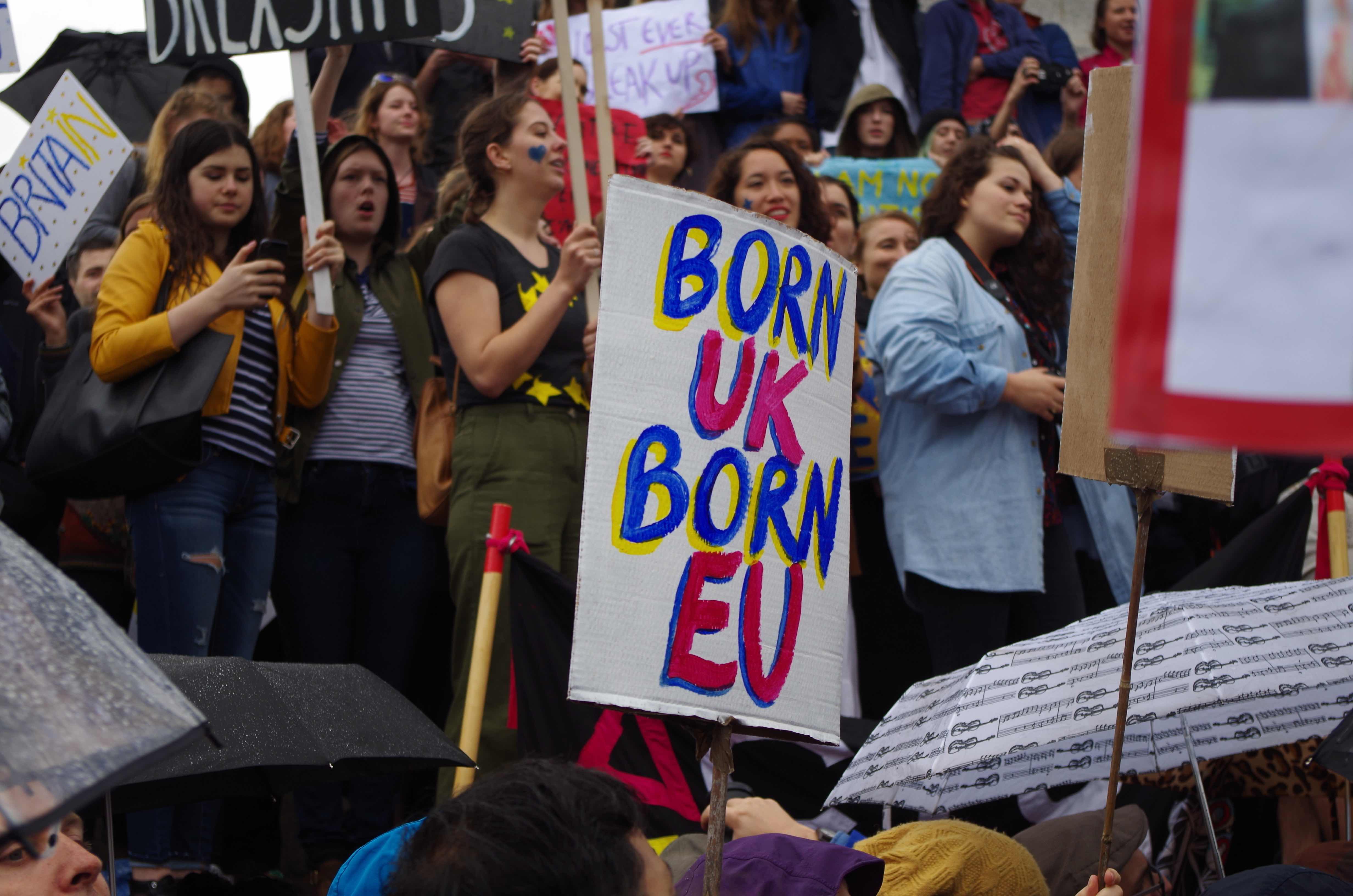 There’s chanting and singing, but little else going on, so I start chatting to a bloke called Dave Ivermee, who’s 28. “Tonight feels slightly strange”, he says to me. “I’m proud that people have braved the rain to be there, but also sad about the result and the aftermath. This evening reflects that the Remain campaign lacked a sense of the pride that people tonight obviously felt.”

With the numbers growing, and people feeling restless, the crowds set off on an impromptu march down Whitehall, bringing the busy London street to a standstill as we head to the Houses of Parliament.

“We can do this,” someone yells from the crowd, although it’s not entirely clear if they’re referring to reversing our EU exit or simply successfully making it down the street. The grass outside Parliament is flooded with people, as live news broadcasts are interrupted by a throng of protestors. 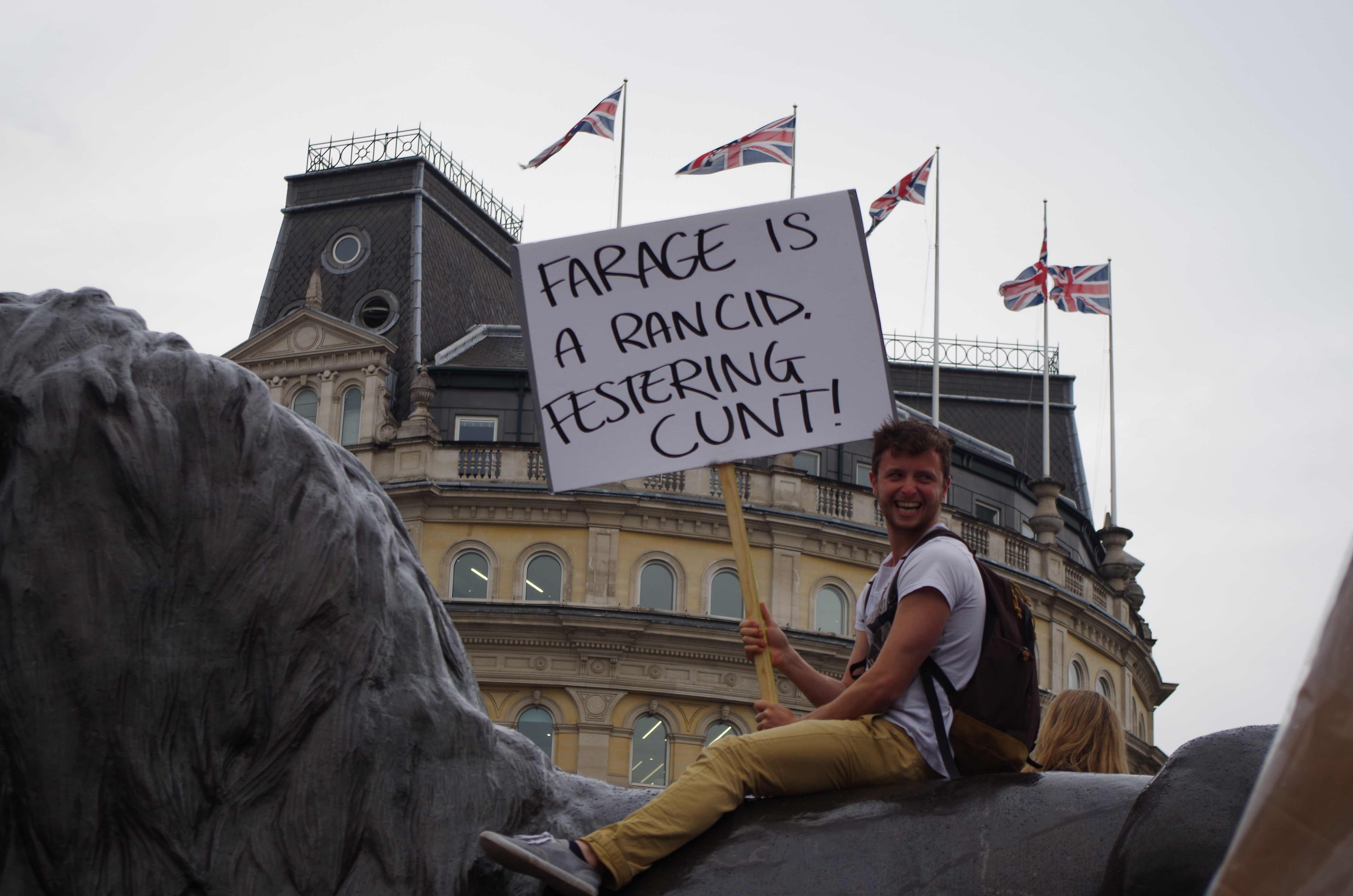 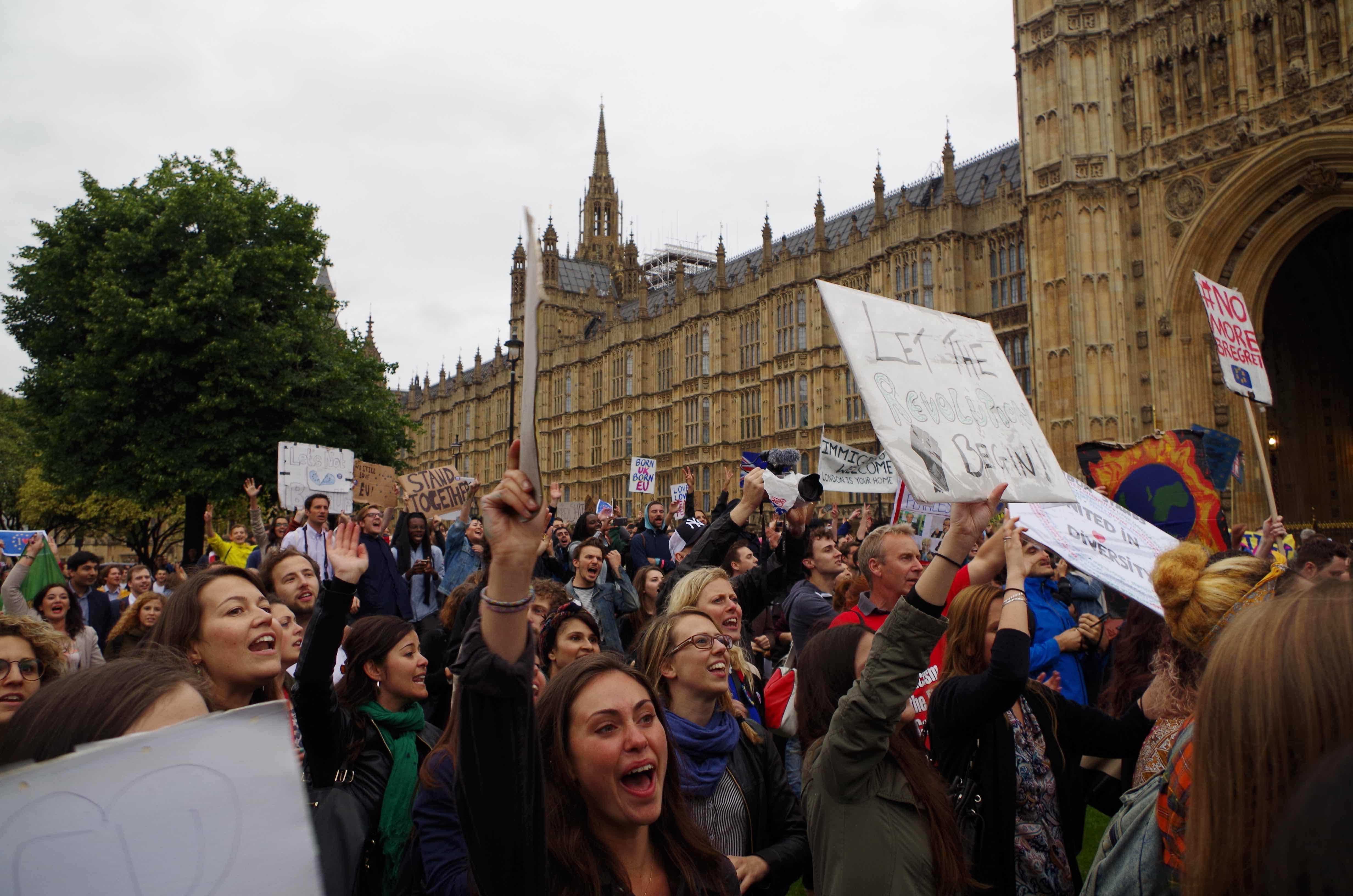 As we arrive a minute’s silence is held in memory of the murdered Labour MP Jo Cox, and afterwards a young guy addresses the crowd. “Our voices weren’t heard last Thursday”, he says. “We’ll make them heard now, through our silence and our compassion. Parliament must listen.”

I wasn’t quite sure what he meant: unlike in most other British elections, in the EU referendum every person had just one vote in a national decision – every had the same amount of sway.

Outside Parliament, Conservative minister Anna Soubry is suddenly wielding a microphone, “My mother is 84 and she wept on Friday”, an emotional Soubry tells us, “just like my 24 and 25 year old daughters shed tears, because we made a terrible mistake.”

As the demonstration continues and the rain fizzles out, the sense of loss increasingly turns to anger. Promises made by the leave campaign have already been reneged on and broken. Promises to divert £350 million to the National Health Service have already been ditched, while leading Brexit campaigners have been forced to admit there’s unlikely to be an end to immigration or free movement of people in Europe. 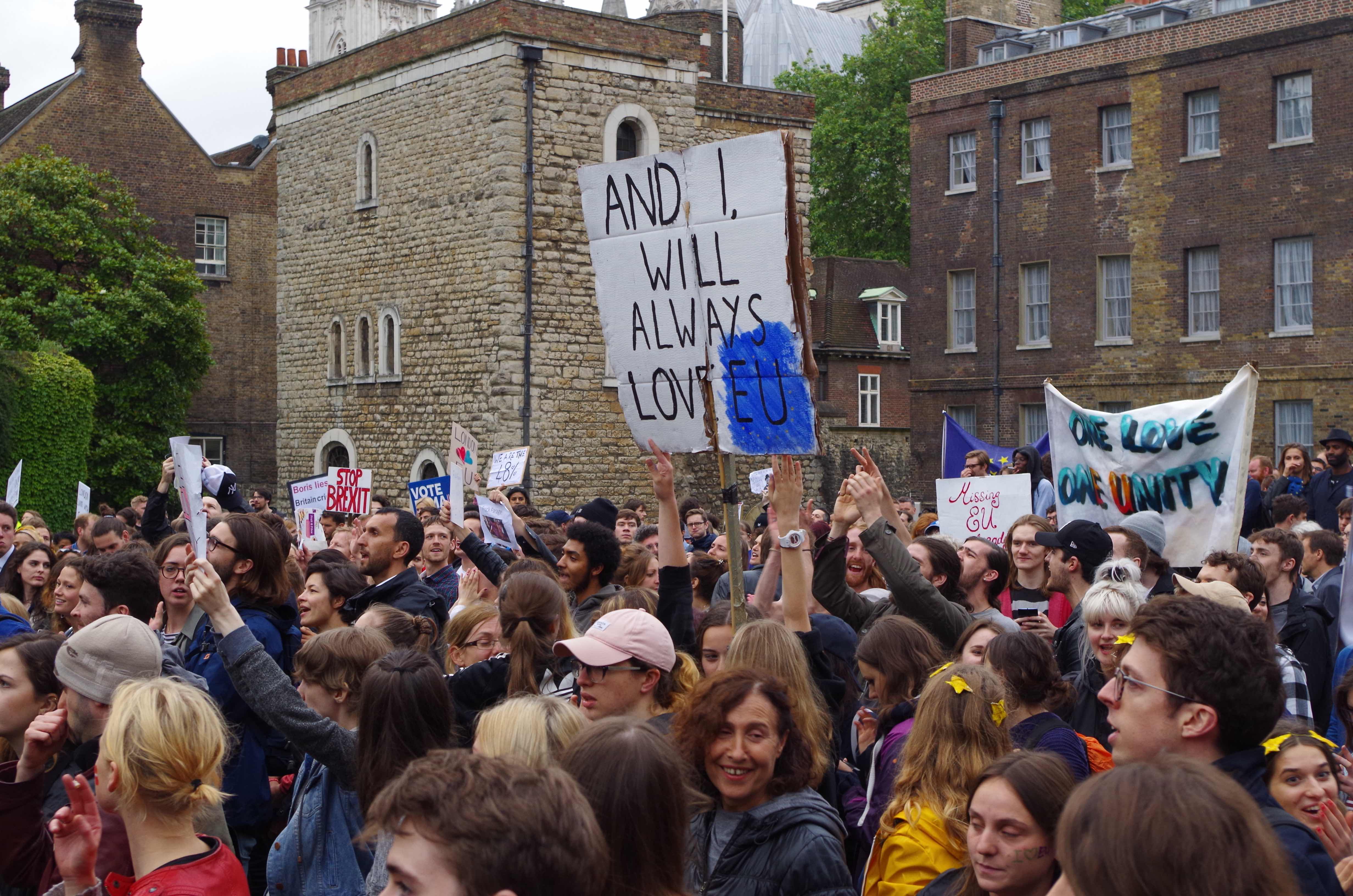 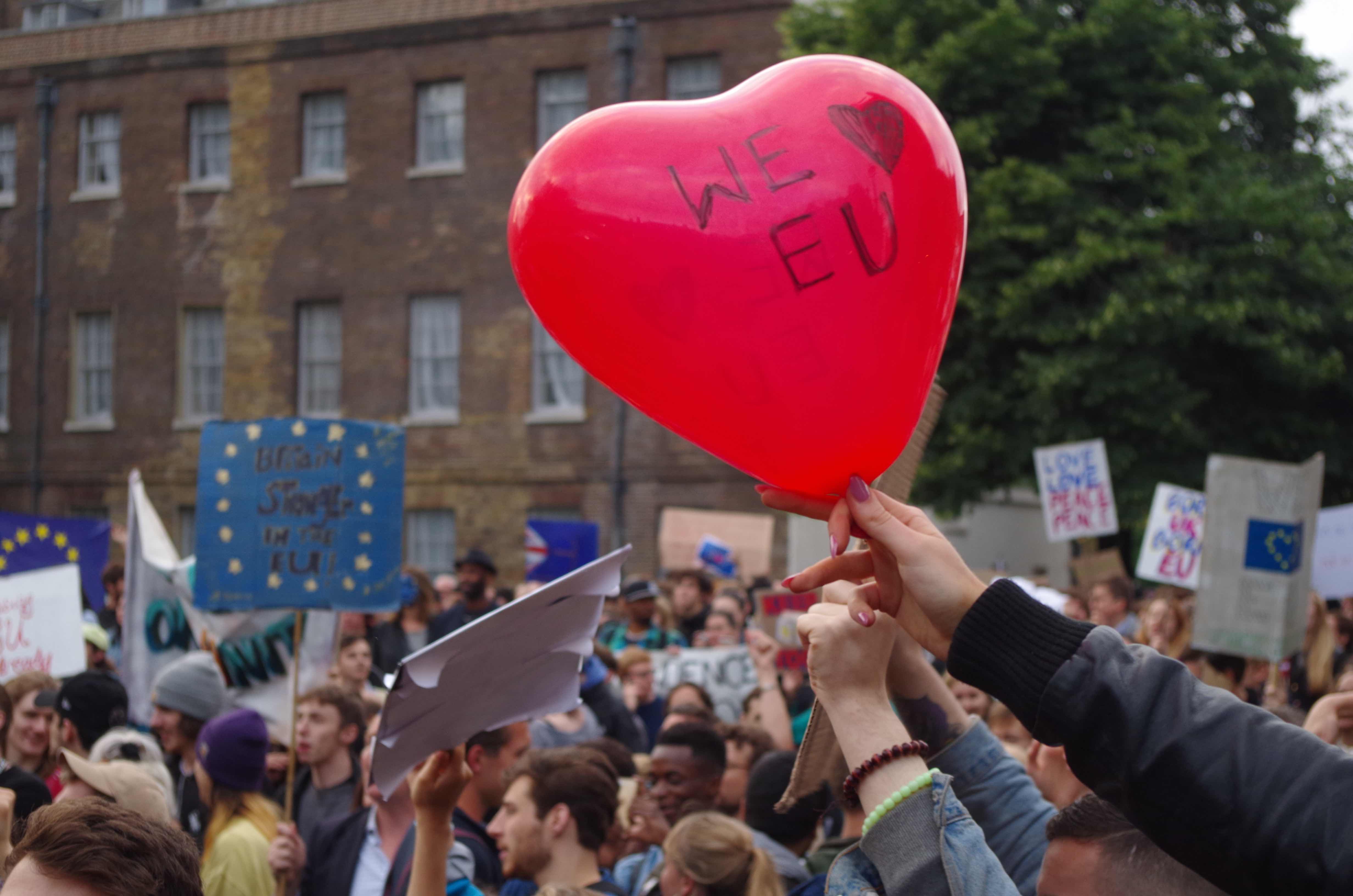 While most politicians are arguing that the referendum must be binding, the people have had their say, it strikes me that this protest might not be so undemocratic. One of the reasons we’ve become so disenfranchised in Britain, especially as young people, is that we’re used to politicians lying. Remember when the Liberal Democrats said they wouldn’t raise tuition fees? When the Conservatives said there’d be no attempt to cut child tax credits? 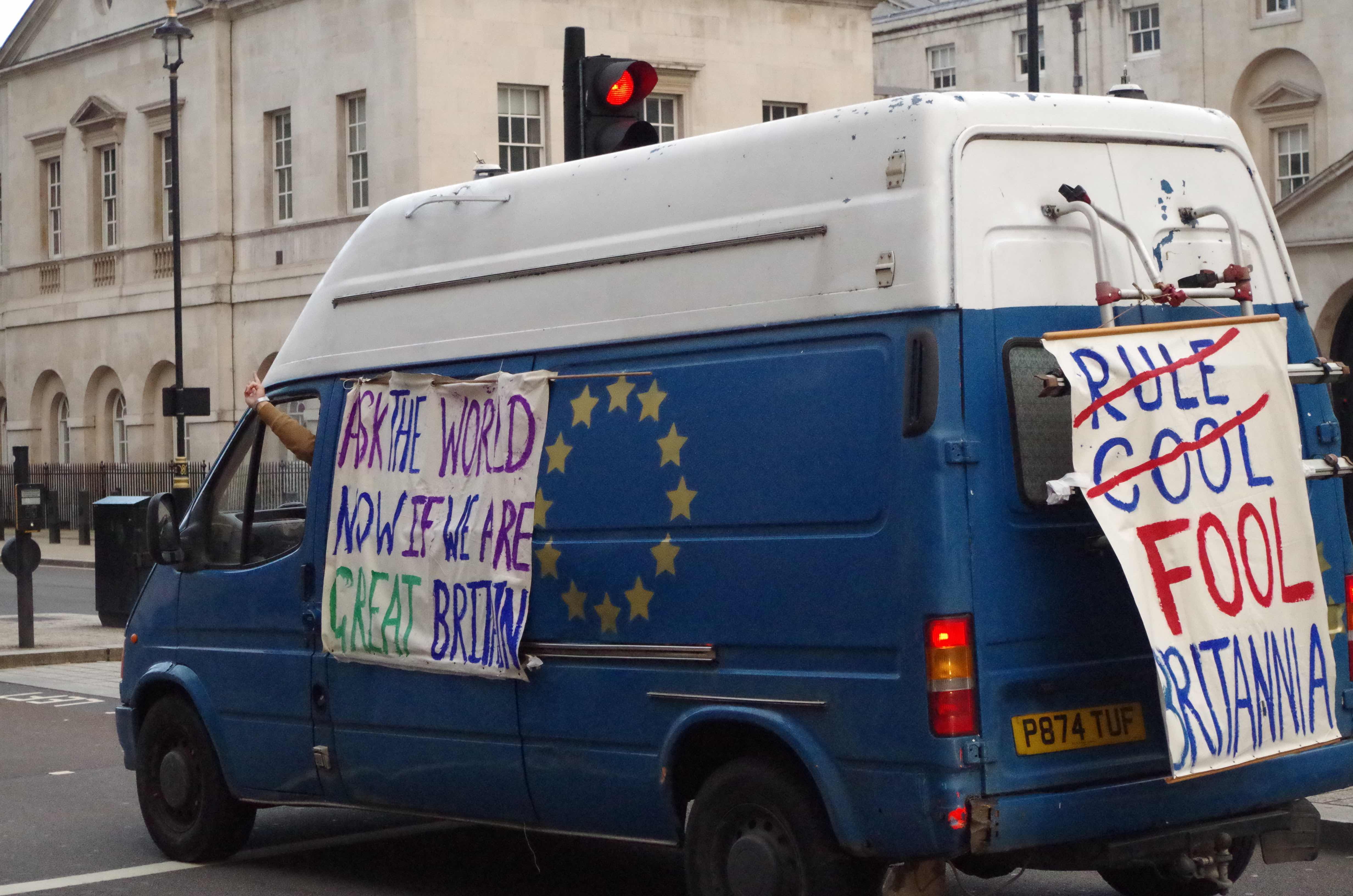 If this campaign gathers momentum, it could be the start of the public truly holding politicians to account. Should we not be provided with opportunities to vote again when ballot boxes were ticket based on lies?

Reddit
RELATED ARTICLES
OTHER ARTICLES
In their latest project, A Glittering Eye, photographers Courtney Asztalos and Michael W. Hicks capture a lavish world on the brink of collapse.
Campuses across the country have closed in response to the coronavirus crisis – but what about the students who have been left behind?
The US author reflects on the success of her genre-bending queer gothic memoir, In The Dreamhouse.
In a new series, produced in partnership with Squarespace, we spotlight real-life artists and makers as they adapt to life under lockdown.
The New York rapper pushed hip hop into bold new realms. He lived through a dark time – but with one hand on the mic, he survived to tell the tale.
It’s been six years since homosexuality was effectively criminalised in Nigeria. Despite this, LGBTQ people in the country are still finding ways to party.