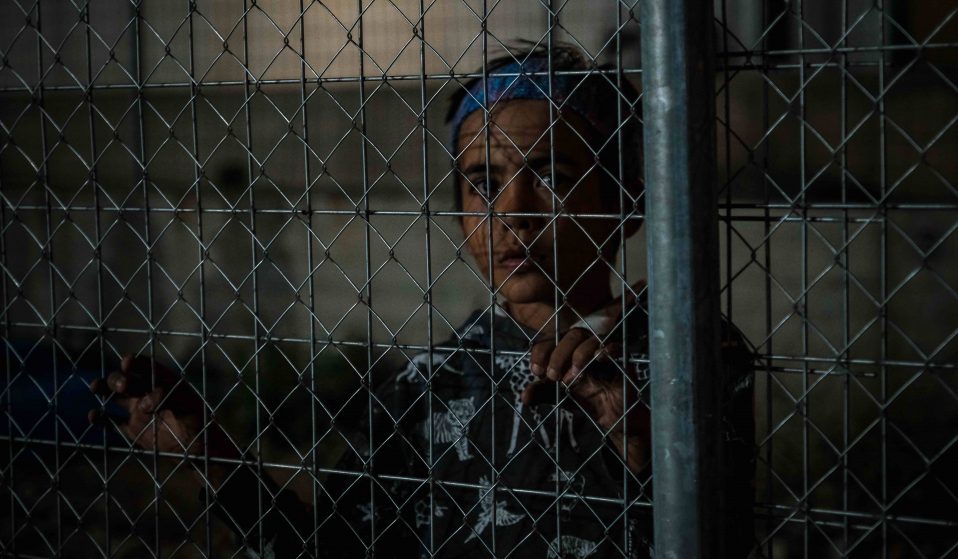 The camp’s population has swelled while living conditions have deteriorated under government inaction, making this crisis inevitable.

The camp’s population has swelled while living conditions have deteriorated under government inaction, making this devastating crisis inevitable.

“Moria is hell, but we’ll miss it when we are gone,” a young Syrian man told me in March, pairing the statement with a smile to indicate the gallows humour.

This was prior to the coronavirus lockdown, and before a fire swept through and destroyed Europe’s largest refugee camp on the evening of Tuesday 8 September. Miraculously, nobody was killed or injured. The young man I spoke to earlier this year may have managed to leave and get a transfer to the mainland. Or perhaps today he is left, like thousands of others, with just the possessions he managed to grab as he fled the burning camp.

Now Moria is gone, there are few that will mourn its passing. Moria was hell. An open air prison. Journalists who have reported from refugee camps across the Middle East have repeatedly said conditions in Moria were worse than anything else they’d seen. Aid workers and journalists have been predicting an impending disaster for months, not least since a huge fire tore through a similar camp on nearby Samos in April and the far-right torched a number of refugee facilities on Lesbos. 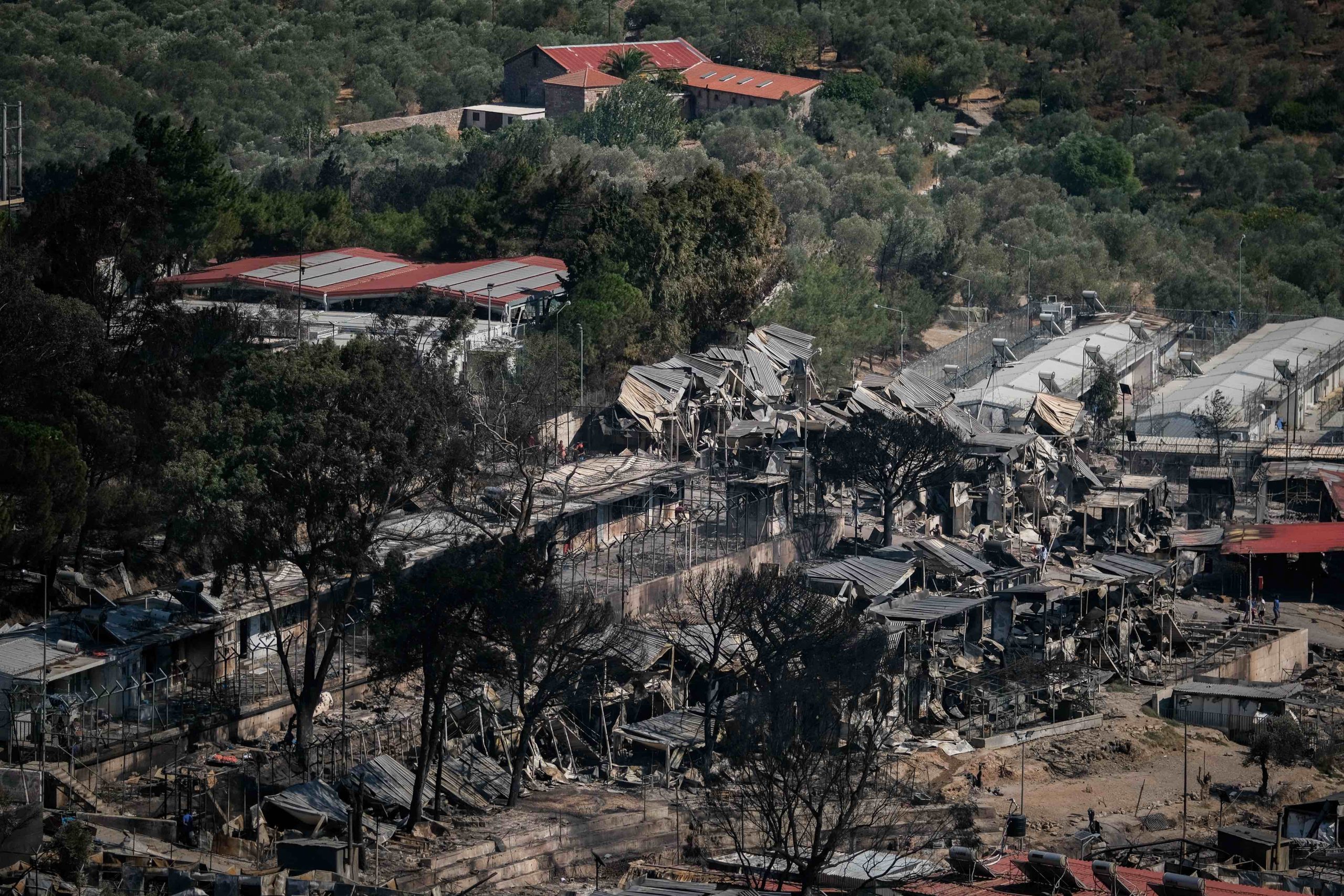 A view of a burned Moria Refugee Camp from the adjacent mountainside.

It’s still unclear exactly how the fires started, although the multiple spots the fire broke out suggest it was deliberate. Authorities blame frustrated refugees while the residents blame local fascists. It should come as no surprise to anyone that Moria was eventually destroyed in a horrific inferno. Despite all the warnings, when the fire erupted Moria was more than four times over its original capacity, with nearly 13,000 people living there – mostly in flimsy tents and hand-built shacks.

Residents, mainly Afghan, Syrian, Iraqi, Pakistani and some west Africans, usually had to queue for around six hours each day for food. Access to clean water and sanitation was incredibly difficult, making ideal conditions for the spread of disease. Yet, when the coronavirus pandemic broke out, the Greek government chose to lock down the camp, rather than move residents to more suitable accommodation. Even after COVID-19 cases appeared in Moria, the government held to their policy. For most, fleeing the flames will be the first time they have left the camp since March.

“Living here was terrible for refugees,” Ahz* explains. “There were so many fights and so many people died here. I decided to take photographs so that people could see the situation inside the camp for themselves. People don’t have enough food, the children don’t have anything and they can’t go to school to get an education.” 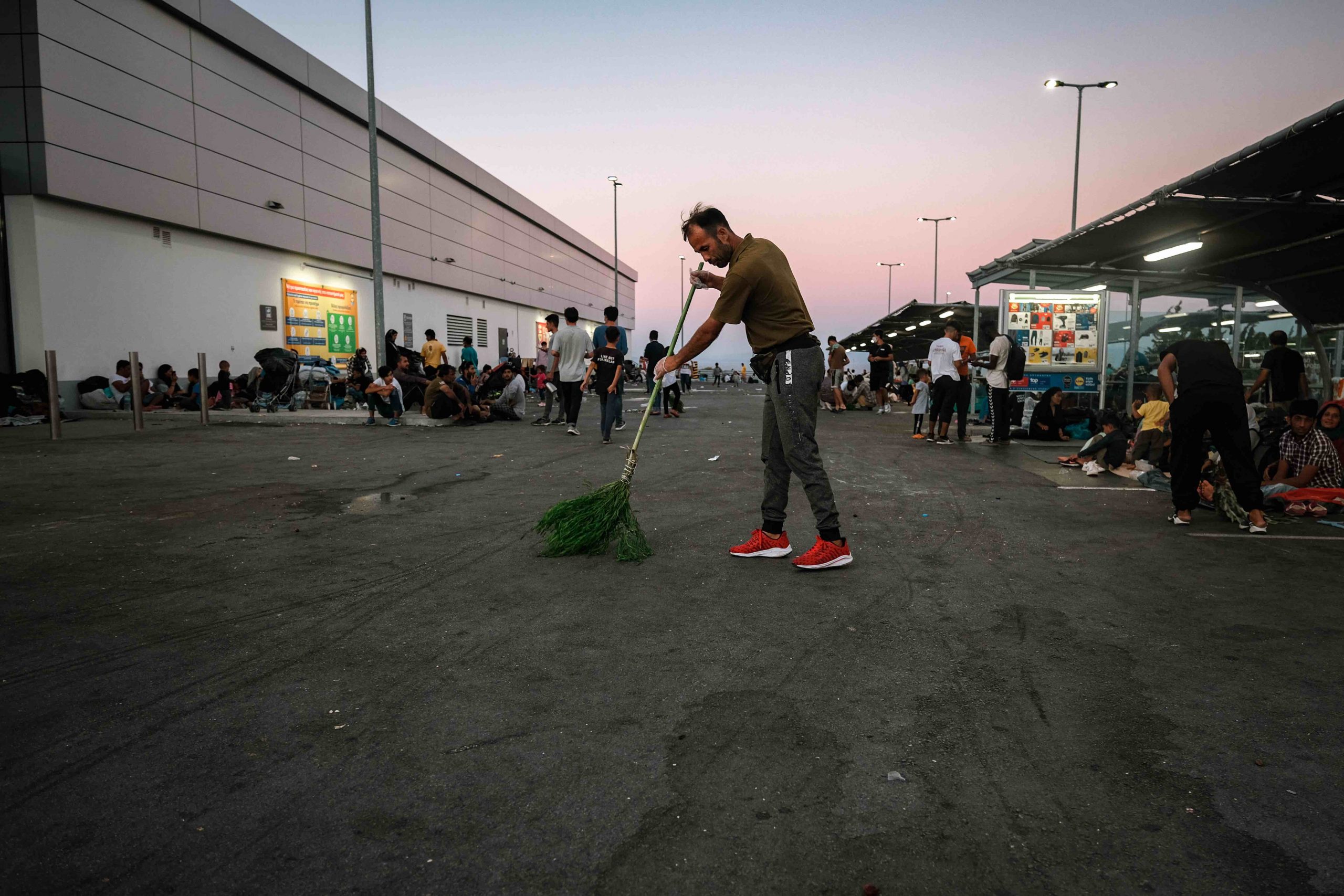 A man sweeps the parking lot near where his family members are resting after Moria Refugee Camp was destroyed by fire and they had to flee.

Ahz is 20 years old, from Afghanistan and lived in Moria for around nine months before the fire. He arrived alone, and was living in a tent with friends he made in the camp. Determined to use his time in Moria as constructively as possible, he set out to teach English and swimming to children in the camp. Until lockdown, he ran regular swimming lessons at the beach, half an hour’s walk from the camp.

Ahz’s photography was shared online by Afghan journalist Mortaza Behboudi and his talent for visual storytelling was recognised by Spanish photojournalist Isabella Fredrick. Together, Isabella and Ahz created ‘Now You See Me’ – an Instagram account spreading awareness of the situation in the camp to the outside world. Ahz has shared his own experiences on the account, from having all of his belongings stolen, to stories of the children living in the camp, and dire conditions under coronavirus, where hygiene and social distance are near impossible.

When he posted images of flames rising above the camp and of terrified refugees trying to escape, he wrote: “This is the current situation in Moria Camp. The fire destroyed almost everything, leaving nearly 13,000 people without shelter. Yesterday we had to sleep on the roads. This is a humanitarian disaster.” 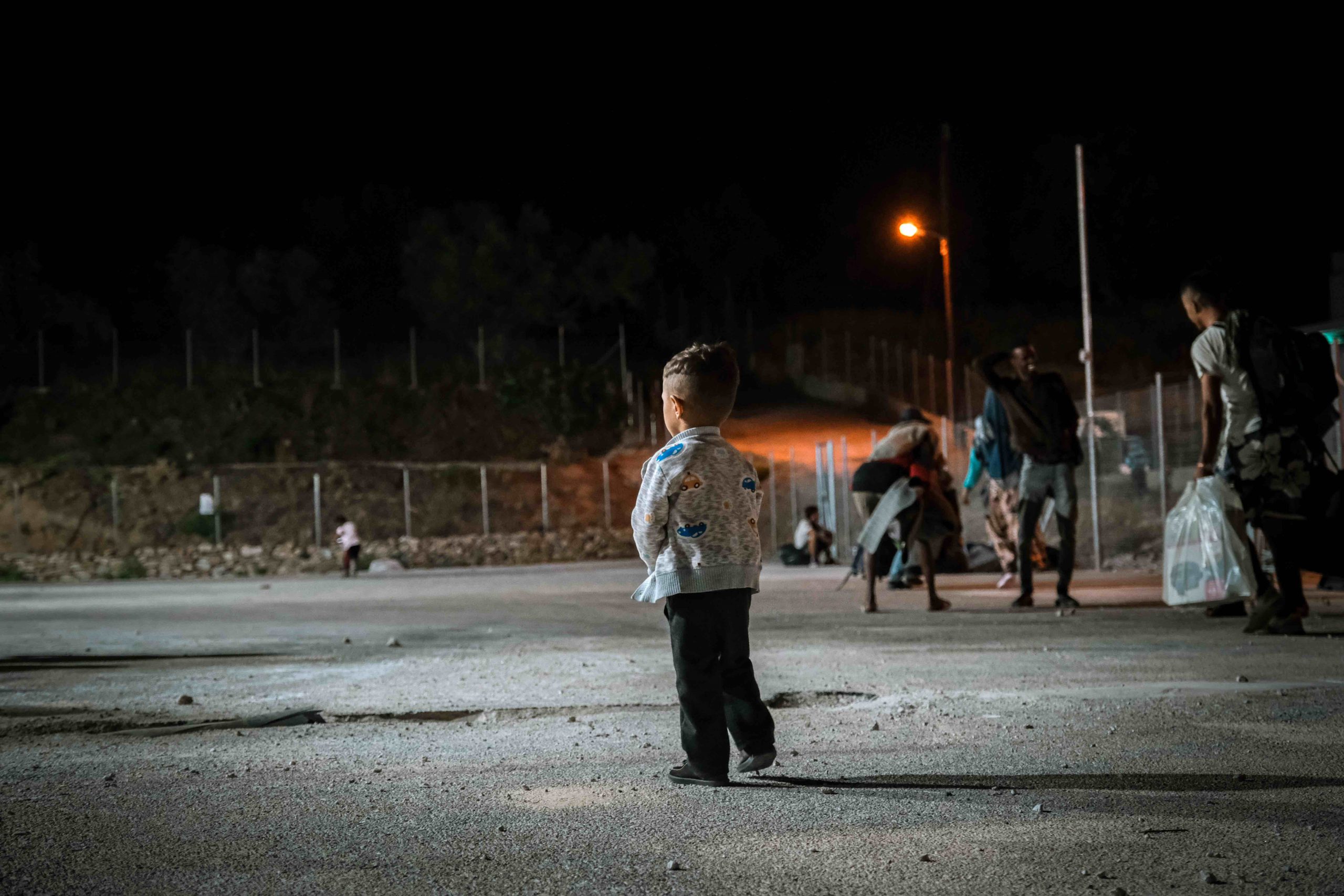 A young Afghan asylum seeker searches for a place to spend the night after fleeing the second night of fires at Moria Refugee Camp.

The Greek prime minister Kyriakos Mitsotakis expressed a similar sentiment to Ahz, calling the situation an “unprecedented humanitarian crisis.” But unlike Mitsotakis, Ahz has no power over what happens on Lesbos. This was a wholly avoidable crisis created by politics, not by the humans confined to Moria but by a lack of humanity shown by the right-wing New Democracy administration, who took power a year ago and have allowed the camp’s population to swell, while living conditions have deteriorated – all under the watch of the European Union.

As a crowd full of children and elderly people were fleeing the camp along the road to Mytilene, they were tear gassed by the Greek police. “We have long warned of the failed ‘hotspot approach’ that has caged people in obscenely overcrowded and unsanitary conditions,” explains Josie Naughton, Chief Executive Officer of Help Refugees. “This is a wakeup call to the European Commission and shows the deeply inadequate system of European solidarity and responsibility-sharing.”

“The Greek government, supported by European countries, needs to immediately address the humanitarian situation while averting a public health emergency,” she continues. “We are calling on the Greek government to conduct immediate rapid testing of the newly displaced population in a safe environment with access to food, water and medical care. Following testing, people should immediately be evacuated from the island to appropriate safe locations.” 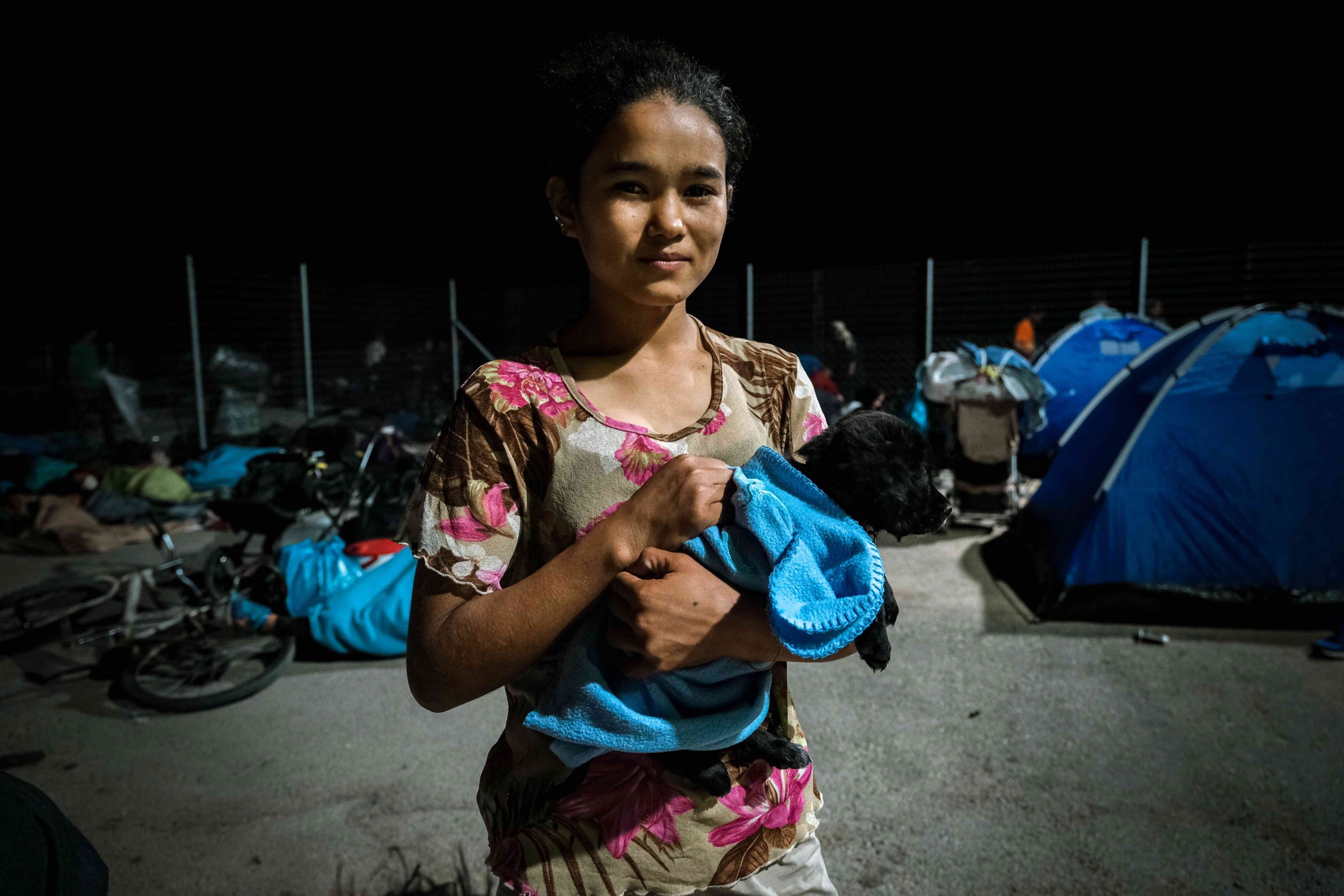 A young Afghan girl holds a small dog she found as she and her family fled Moria Refugee Camp.

Today, Ahz has been documenting how the camp’s residents have fared in the two days since fleeing the camp; sleeping in a cemetery and queuing for hours at a makeshift food distribution point. “Everyone is scared and confused,” Ahz explains. “We can’t go anywhere, the police won’t allow us to go to Mytilene. We’re just sitting in the street and some people are sleeping. We don’t know what will happen to us.”

The EU has agreed to relocate 400 unaccompanied minors to the mainland and the German state of North Rhine-Westphalia has pledged to take 1,000 refugees. But right now, it’s still unclear where most of the rest of the 13,000 will end up. But as little-to-nothing is being done to address the conflicts and ecological crises that continue to force thousands from their homes, there will be more Morias — and surely more fires.

“I just want a normal life, like other people,” Ahz explains. “They say we are guilty for all the bad things that are happening, but we just want peace and shelter. I want this world to recognise that humanity is important. We should all be human to one another.” 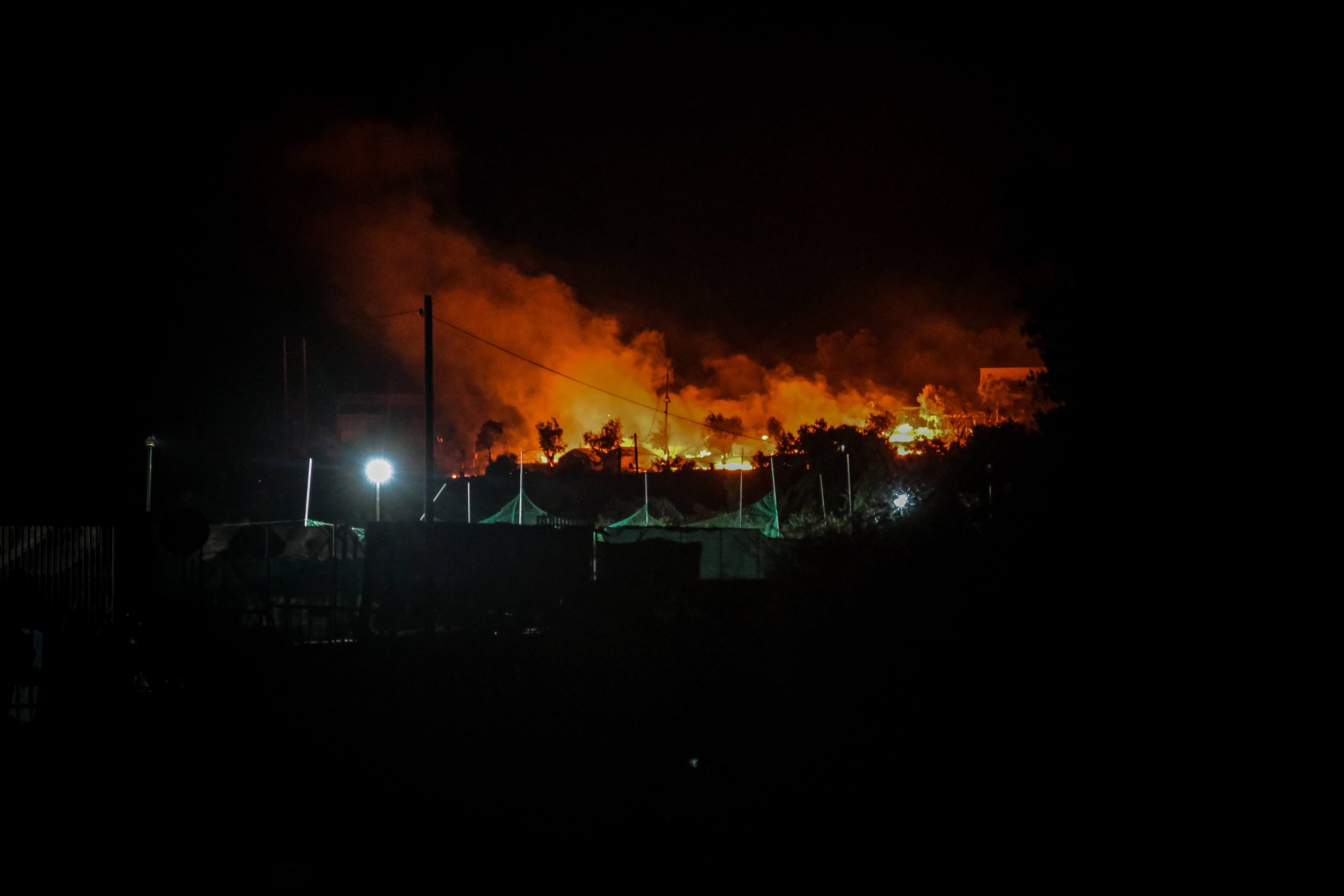 Moria Refugee Camp on Lesvos Isalnd burns for the second night in a row.

*name has been changed to protect identity.

Linkedin
RELATED ARTICLES
OTHER ARTICLES
Despite numerous lawsuits, deaths and disturbing health reports, the Michigan city’s tap water remains untreated. A new documentary tries to find out why.
In an abandoned school in the heart of the city, hundreds of families are surviving without official support, funding or paperwork.
In his latest collaboration with Save The Children, photographer Giles Duley returns to the Iraq city to captures the devastating aftermath of the Battle of Mosul.
For 25 years, Dutch photographer Jan Grarup has been travelling the world to document some of history’s most significant wars, crises and catastrophes.
The lack of government humanitarian support and incendiary media coverage has prompted ordinary people to go to Calais and help out any way they know how.