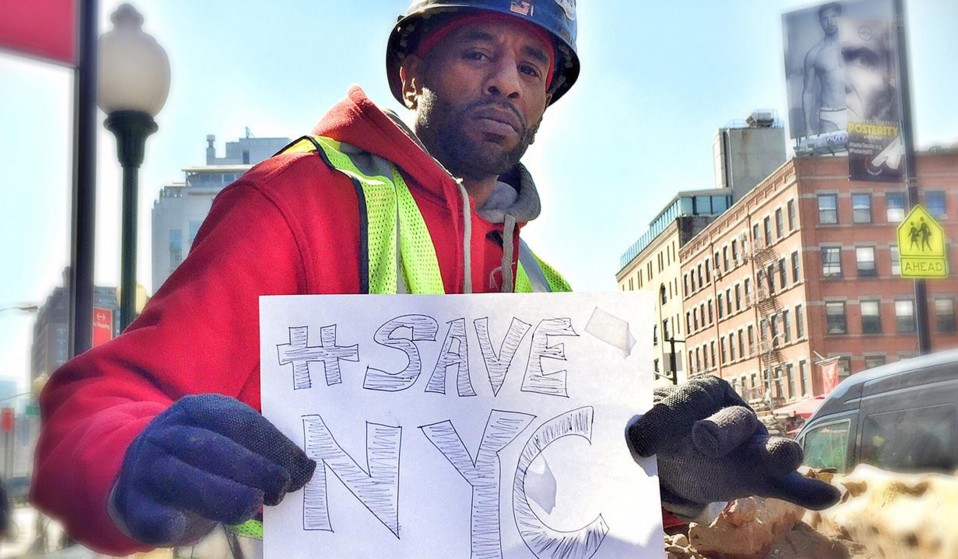 Gentrification is suffocating New York’s creative culture. We spoke to #SaveNYC campaign founder Jeremiah Moss to find out why it’s time to fight back.

Gentrification is suffocating New York’s creative culture. We spoke to #SaveNYC campaign founder Jeremiah Moss to find out why it’s time to fight back.

A strange force is spreading across New York, turning the city’s chaotic, technicolour mass of humanity and culture a dull corporate beige. It’s called gentrification, and it plays out on many levels: from the closing of mom and pop stores, attempts to hide (but never solve) social ills such as homelessness and the expulsion of the poor and minorities, to the unstoppable spread of bougie brunch spots and the tearing apart of long-established communities.

New York City is devouring its children and all we have to show for it are chains: endless hotel, restaurant and store chains.

As the editor of Vanishing New York, Jeremiah Moss has long documented destruction of the city’s cultural heritage – but now enough is enough. He’s struck back with the #SaveNYC campaign, a growing movement that aims to unite New Yorkers around preserving what makes their city great.

Through a multi-level strategy that includes a social media campaign, neighbourhood action and political lobbying to pass The Small Business Jobs Survival Act, it’s the most joined-up effort yet to fight back against gentrification.

We spoke to Jeremiah to find out more.

When did you first begin to feel there was something wrong in NYC?
The colossal, sweeping change we’re seeing today began before Bloomberg, but I started noticing that the shift went into hyperdrive around 2005. Bloomberg’s plan to transform the city into what he called a “luxury product” was beginning to take shape. Around 2003, his administration unveiled the plan, with an ambitious brochure entitled “Bloomberg Administration Major Economic Development Initiatives.” It included a map of the whole city, covered in darkened sections to be re-developed. In the end, the Bloomberg Administration rezoned nearly 50% of New York, more than 104 neighbourhoods across the five boroughs, bringing in massive luxury development and mega-corporations. 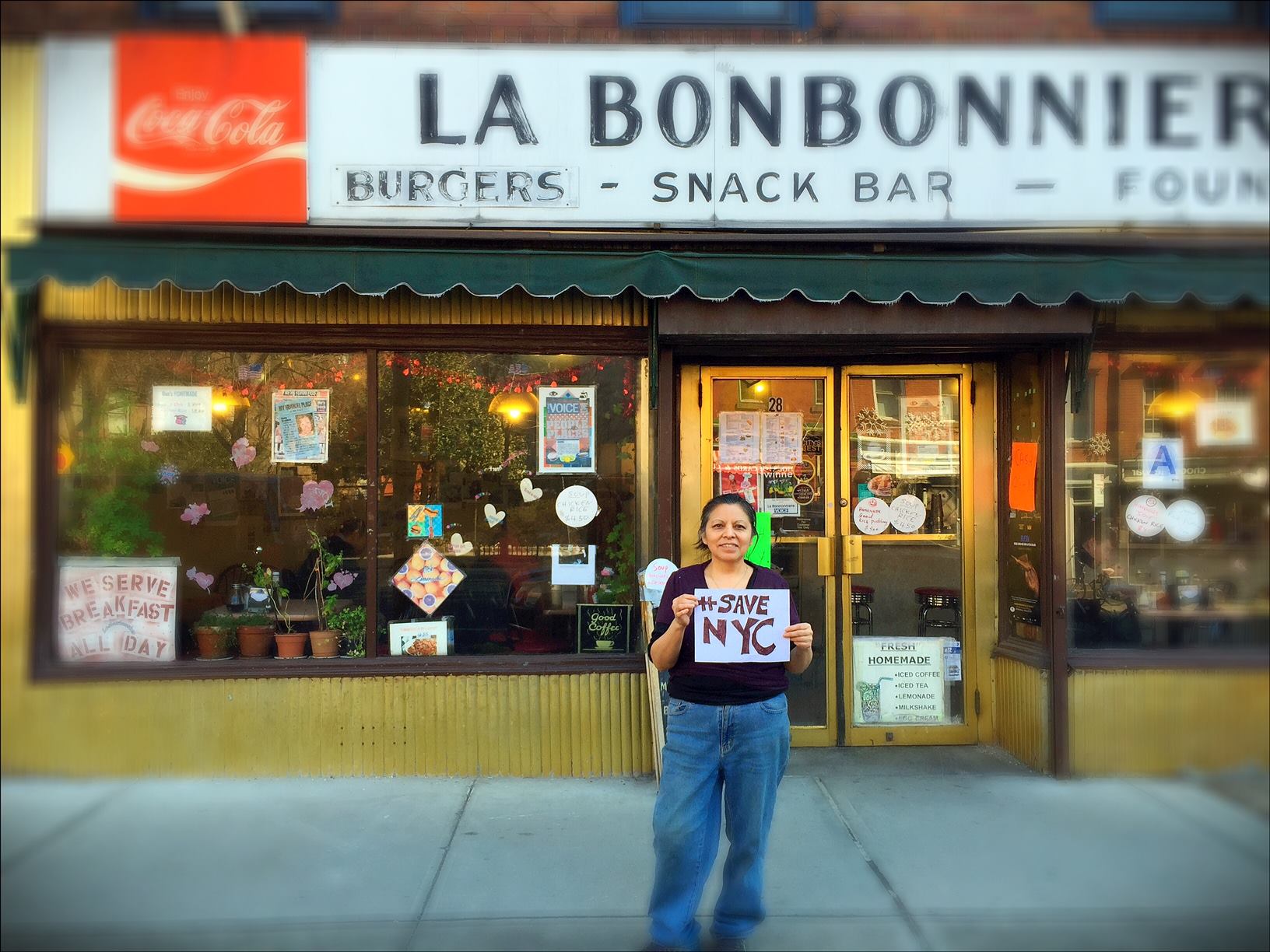 What do you feel is really driving gentrification and the destruction of the city’s heritage?
It’s a manifold issue, but to keep it more or less simple, on my blog, I talk about what I call hyper-gentrification. The academic Neil Smith called it the “third wave” of gentrification, or “gentrification generalised,” which is not like gentrification of the past. Starting in the 1990s, according to Smith, “Gentrification became a systematic attempt to remake the central city, to take it back from the working class, from minorities, from homeless people, from immigrants who, in the minds of those who decamped to the suburbs, had stolen the city from its rightful white middle-class owners. What began as a seemingly quaint rediscovery of the drama and edginess of the new urban ‘frontier’ became in the 1990s
broad-based market driven policy.”

So hyper-gentrification is when the city government colludes with corporations and developers to remake neighbourhoods for the upper classes. And then this happens at a breakneck pace. It’s very fast and it aims for completion, pushing out all small businesses, evicting individuals, and replacing the existing culture with the new – upscale businesses, national chains, and people who can pay high rents or buy luxury condos.

New York, like other global cities, is also experiencing a reversal of the white flight trend of the mid-20th century. Urbanist Richey Piiparinen calls this back-to-the-city movement “white infill.” In short, young white people from the upper classes are flocking to New York from the suburbs. Many of them bring their suburban tastes and lifestyles with them. They want chain stores. They want Starbucks and Olive Garden. It makes them feel safe and comfortable. When you scratch the surface of that sentiment, it’s apparent that they don’t actually like the city. They are afraid of, and often disgusted by, the truly urban.

Going back to Neil Smith, he called this “revanchism,” for revenge. The suburbs are getting revenge on the city.

How will the city and its culture be affected if these trends are allowed to continue?
It will be filled with nothing but chain stores and people with a suburban mentality. Its character, its unique personality, the diversity and creativity that makes it a great city, will be destroyed. Already, this has happened across entire neighbourhoods. And it’s not just Manhattan. While character remains in the outer boroughs, hyper-gentrification won’t stop. It doesn’t recognise borders. This is clear-cutting and it’s spreading everywhere. 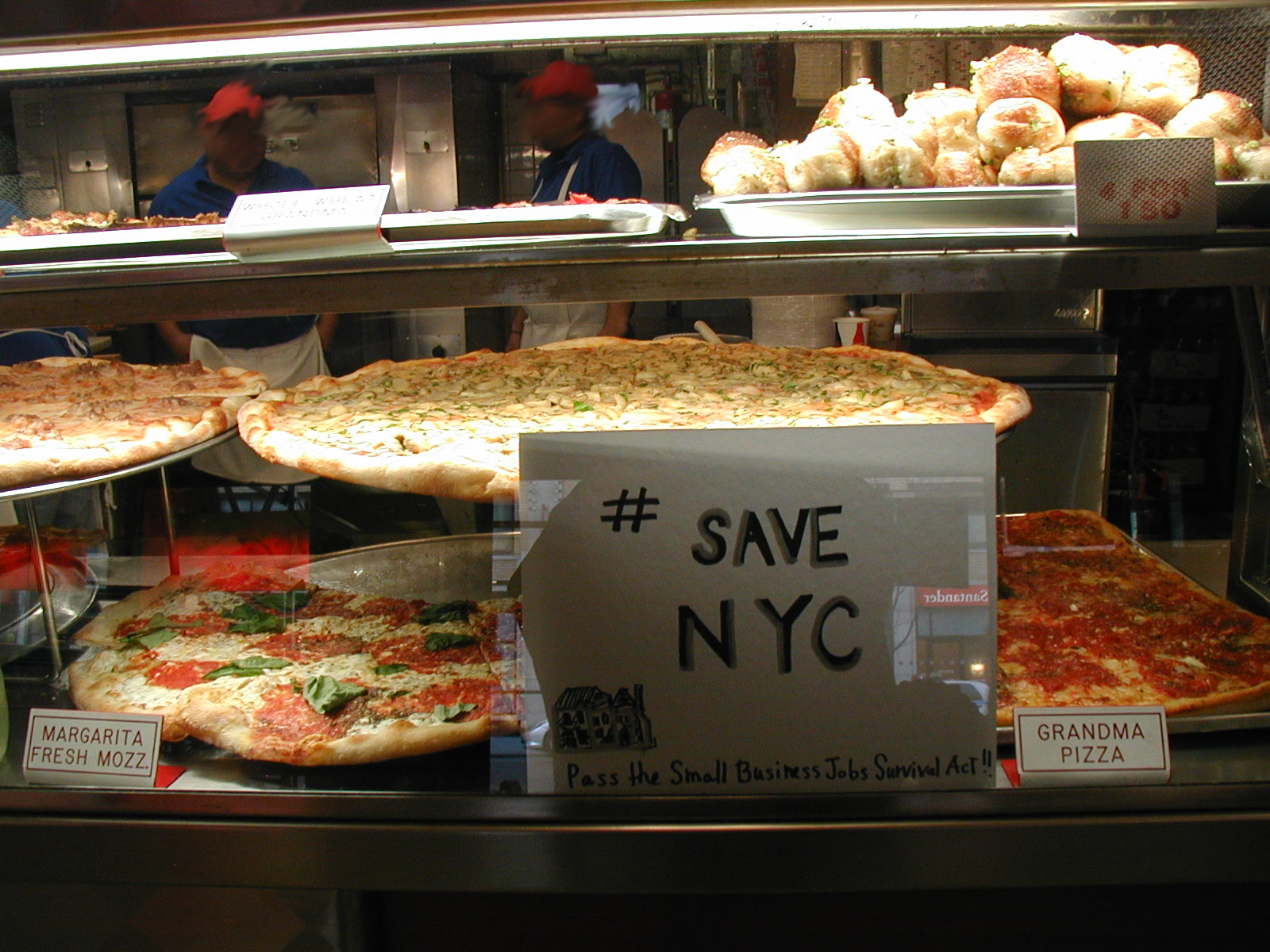 Is this not just nostalgia for the good old days?
Some of it is nostalgia, but mostly it’s – at least for me – about the wish to live in a true urban environment, which means diversity, a certain amount of chaos and unpredictability, unique personalities, a possibility for strange and wonderful and creative things to happen.

None of that can occur in a controlled, bland, predictable environment built on the model of a suburban shopping mall. New York City is being curated and packaged for mass consumption. “Disney-fied” is the word that often comes to mind.

Could you explain how you came up with your multi-pronged strategy: social media campaign, testimonials and political activism? Why is it important to fight on many fronts?
The destroyers of New York used a multi-pronged strategy: rezoning, eminent domain, tax breaks to corporations, etc. So we need a multi-pronged strategy to stop the destruction and course correct. In London, there’s the Save Soho project, where a few celebrities made a video, and I thought why not do #SaveNYC, providing a space where New Yorkers, tourists, celebrities, anyone can post a video or send in a photo with the #SaveNYC message. This would show City Hall that there’s a crowd of us out here, we’re angry and we’re tired of watching the city be destroyed. We want real change.

The Small Business Jobs Survival Act will help to protect existing small businesses when it comes time for them to renew their leases, and we’re fighting hard for that right now. We also need a city-wide ordinance to slow down the spread of chain stores. I’m not advocating for no chains, and I shop at chains myself, but it’s about balance. We’ve gone way out of balance and it’s getting worse every day. Such an ordinance is not so far out – San Francisco does it. And when Rudy Giuliani was mayor, he rezoned so adult businesses could not cluster together, so why not rezone to stop the clustering of chains?

If we could get at least those two strategies in place, I could breathe a little easier.

Also, and here’s where small towns excel at something New York doesn’t – their townspeople get to say no to an incoming national chain. Neighbourhood people in New York should have the power to say no, too, and influence the commercial landscape of their parts of town. 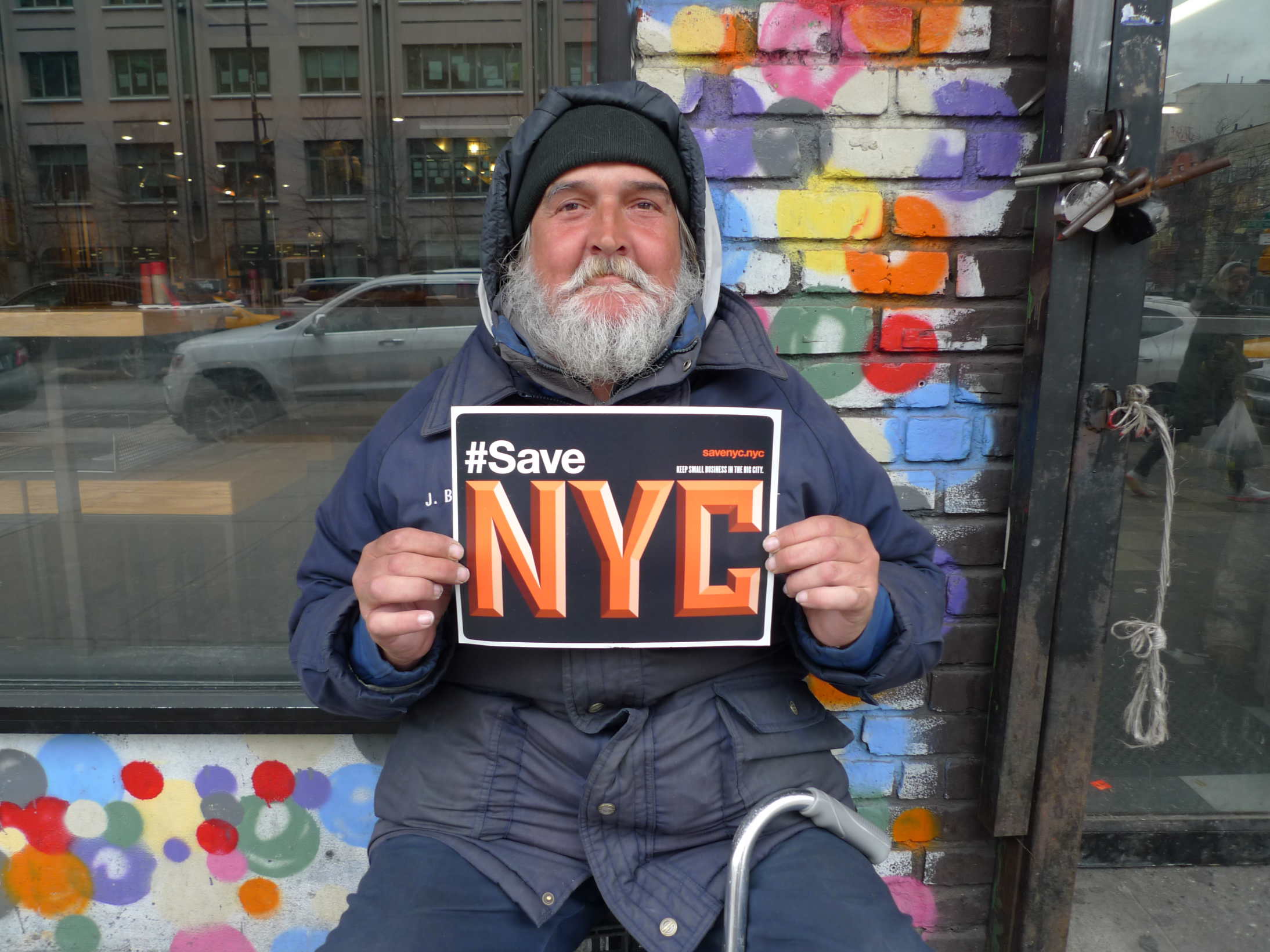 What will New York look like after it is ‘saved’?
I hope its streets will repopulate with small businesses, and that the number of chains will decrease. That will restore the aesthetic diversity of the streets and repair some of the damage done to local community networks.

What’s your call to action? How can people get involved, show support, be part of the change, etc.?
I’d love to see more people adding their videos and photos to the website at savenyc.nyc. They can also join the #SaveNYC Facebook group to discuss taking action, which might mean going to a meeting or attending a rally. We’ve got a concert/performance coming up in May, featuring the downtown legend Penny Arcade. We also want people to tweet and retweet with the hashtag #SaveNYC.

People are encouraged to bring their own ideas to the online forum, use their skills and talents, and get things going in their own neighbourhoods. Already, multiple leaders are emerging from the #SaveNYC group, and they’re doing their own things, which is great. #SaveNYC is a crowd-sourced grassroots movement. If we’re going to save New York City, it’s going to take a crowd.

Find out more about the #SaveNYC campaign.

Linkedin
RELATED ARTICLES
OTHER ARTICLES
Rhiannon Adam spent three months capturing an ageing society wracked by division, isolation, and the aftermath of scandal.
For over a decade, gamblers have won big by employing people to place live bets from the court. But does this dubious method still work?
Ahead of the release of their first collaborative album, the producer and rapper talk psychedelics and the state of UK hip hop.
Cindy Campbell recounts how her brother ushered in a new era of musical culture at a party she held in the Bronx in ‘70s.
Birdy Chu reflects on documenting the historic moment in which the territory was formally passed back from the UK to China.
Financial turmoil is pushing people who work in the sex industry into more dangerous and desperate situations as a means of survival.