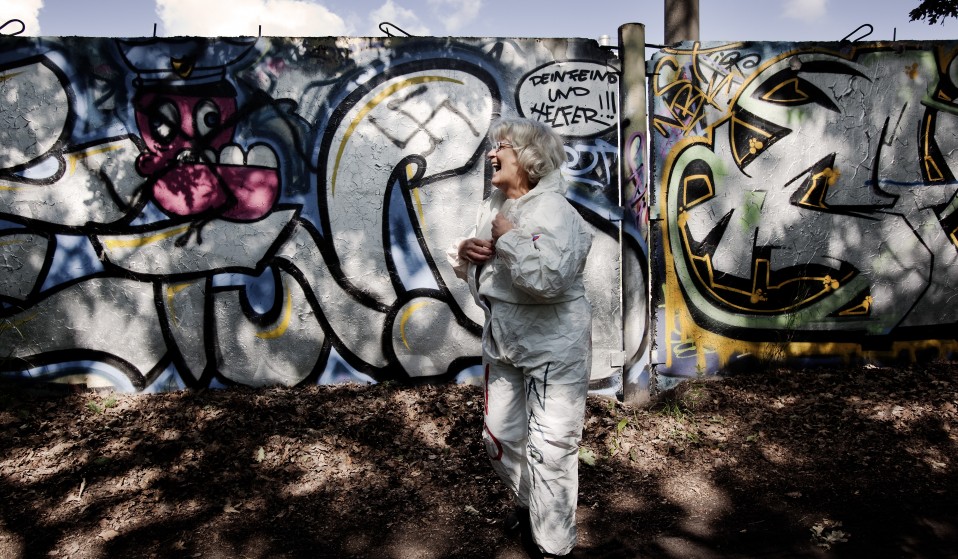 Berlin-based pensioner Irmela Mensah Schramm is on a one-woman crusade against fascist propaganda.

Berlin-based pensioner Irmela Mensah Schramm is on a one-woman crusade against fascist propaganda.

This story first ran in Huck 29.

Schöneweide in East Berlin is a neo-Nazi hot spot. Known for its clashes between right-wing extremists and left-wing activists and police, some commentators have dubbed it a ‘no-go area’. But it’s here, in the former Soviet industrial district, that we meet sixty-five-year-old Irmela Mensah Schramm, otherwise known as ‘The Hate Destroyer’. For the past twenty-five years, this strong-minded pacifist has been resisting the far-right with nothing more than a metal oven scraper.

Irmela points out a local neo-Nazi bar called ‘zum Henker’ which means ‘to the executioner’. It’s one of the most important meeting places for Berlin’s right-wing scene. We walk five minutes from the station and find a street with fascist and racist stickers on every available surface – drainpipes, signposts (and the signs themselves), bike stands, electricity boxes and phone booths.

Irmela gets to work scraping the stickers off. After each one is destroyed, she smiles broadly. “Freedom of expression has limits,” she says. “It ends where hatred and contempt for mankind begins.”

According to the German Federal Office for the Protection of the Constitution (BfV) in 2011, there were approximately 26,000 right-wing extremists – 5,600 of which are fanatical and violent neo-Nazis – living in Germany. In 2010, reported the BfV, they were responsible for 16,000 incidents of crime, from vandalism to aggravated assault.

Although German law forbids swastikas and other neo-Nazi symbols, fascist groups including the National Democratic Party (NPD), push their racist ideology in places like Dortmund and Berlin through stickers, posters and spray-painted slogans such as ‘Foreigners out’ and ‘Berlin stays German’.

Irmela says the authorities don’t seem interested in cleaning the streets up. The police show little interest in her work (although they have accused her of defacing property), but the neo-Nazis are more pro-active, spray-painting threats to her on walls.

“I am known to them by name,” she explains. “They sprayed on the wall of a building, ‘Schramm, we will get you.’ I have already called the police a few times, because they have threatened me. But nothing happens.”

It seems that things are getting more dangerous for this silver-haired pensioner. Just recently, in Schöneweide, Irmela was chased by five, masked neo-Nazis. But she remains undeterred, having removed over 40,000 stickers since January 2007. So what compels her into action? “If you keep silent you are complicit,” she says. “And I just don’t want to be complicit when the social climate is tainted by hatred.”

Irmela may be leading the charge in her “full-time job against intolerance” – spending around a hundred hours of her time and €300 from her pension every month – but Berlin is starting to catch on. As Irmela gets to work on some fascist stickers at a train station in South Berlin, two boys recognise her and shout, “There’s the taker offerer!” A man tells her she’s vandalising property, but another comes up and helps her with a sticker beyond her reach. Some people even hug and thank her.

When she is satisfied she has removed every last inch of offending material, Irmela gathers her things and heads to the next place on her list.

Linkedin
RELATED ARTICLES
OTHER ARTICLES
Photozine and documentary by Russian filmmaker, photographer and fashion designer show a cultural struggle happening behind the scenes of a war zone.
The battle for the Southbank skate spot is still raging but no matter what the outcome, the Southbank activists (LLSB) have succeeded in mobilising a stigmatised London youth.
A selection of cool films, books, events and skate-related stuff from Berlin's Bright XVII trade show.
Society pond squatters with a monochromatic filter of misconceptions, but there's a unique tone in their living mode.
HUCK takes a stroll into the bucolic English countryside to visit the commune-style home of anarcho-punk band Crass, pioneers of direct action sound.
Tipi Valley has thrived as a community for over three decades with no rules and no councils, blazing a path for alternative living – hardcore style.