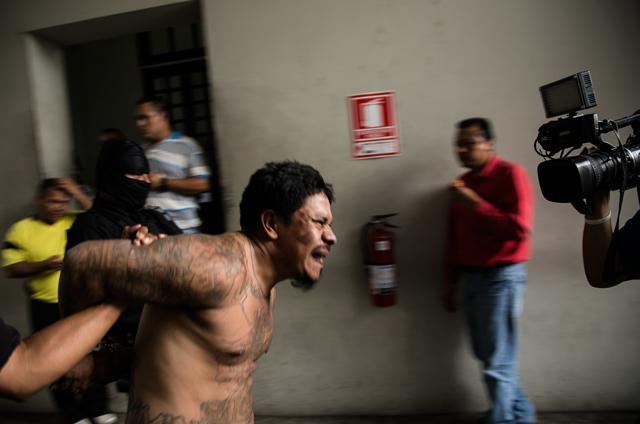 Journalist Óscar Martinez is on first name terms with the street gangs of El Salvador - the most violent country in the world outside an official war zone.

Journalist Óscar Martinez is creating political earthquakes with his up close and personal investigations into the street gangs of El Salvador - the most violent country in the world outside an official war zone.

Journalist Óscar Martinez knows the man he is talking to is going to die. It won’t be old age, a fall or cancer that kills 30-year-old Miguel Ángel Tobar, also known as El Niño Hollywood, but another epidemic which plagues the small Central American nation of El Salvador: gang violence.

El Salvador is a country at war with itself. Since a brutal civil war began in 1980, it has witnessed some of the highest levels of violence in the world. After the signing of the peace accords in 1992, the nature of violence mutated into a new kind of civil war, between the authorities and two opposing street gangs, the Mara Salvatrucha 13 (MS-13) and Barrio 18 (18th Street), which has helped maintain El Salvador’s infamous position as the world’s most violent country outside a declared war zone.

Witnessing the aftermath of horrific violence and seeing sources killed on a regular basis is all part of a day’s work for an investigative reporter at El Faro, Latin America’s first online newspaper and a beacon of investigative journalism in the region. Óscar and his colleagues in the Sala Negra investigative unit have had to learn to live with the responsibility that their stories can and do get people arrested, forced to flee their homes or even killed.

“Assassinations, dismembered bodies and the gangs’ culture of death are all aspects of the hyper-violence in El Salvador,” Óscar explains. “Journalists can make the mistake of thinking that just by describing those kind of acts, they’re explaining something. But to really explain what happens when gangs control the neighbourhoods and why the political class of El Salvador don’t give a shit about what happens in those areas, you need time and you need to talk to a lot of people.”

In a land where life is cheap, Óscar is one of the few people trying to understand the violence – and hold those responsible to account. While others turn away, he and his team at El Faro have spent years building up an extensive network of sources in gang neighbourhoods, political parties and businesses.

Often their long-term investigations require getting up close and personal with those pulling the trigger, like contract killer El Niño Hollywood, whose tragic end is just one of the stories that makes up Óscar’s gripping collection of long articles, A History of Violence: Living and Dying in Central America. The book focusses in on the personal stories of characters caught up in the gang war, as well as in drug trafficking in neighbouring Honduras and on the migrant trail to the United States. 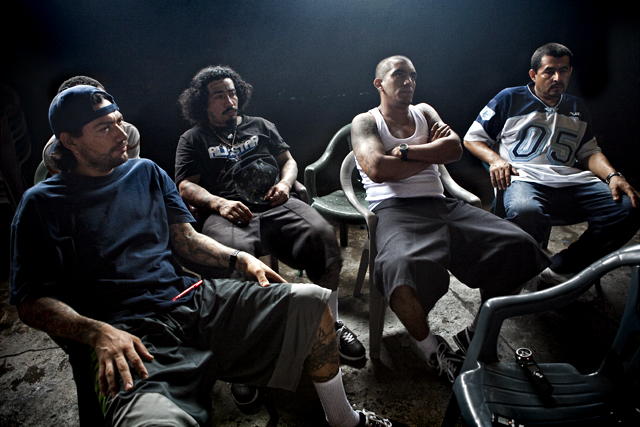 The leadership of the La Mara Salvatrucha. Photo by Pau Coll

But it’s the violence of his home country of El Salvador and the authorities’ inability or unwillingness to stop the bodies piling up, that is Óscar’s greatest concern. “One of my obsessions is to explain the root of the violence,” he says, which is a sorry tale that goes back decades – and strongly implicates the US.

Shortly after Central America was embroiled in Cold War US-proxy civil wars during the 1980s, the American government deported 4,000 gang members back to Guatemala, Honduras and El Salvador. Gang violence from the US inner cities was exported to Central America – and blossomed. The Mara Salvatrucha, for example, was founded in the 1970s in Southern California and now counts 40,000 members in El Salvador alone.

As El Salvador is not a trafficking route, it avoids the collateral damage of narco-traffickers ferrying drugs to the US. However, Óscar’s work highlights the American connection to gang violence, the exodus of people north and cartel violence in neighbouring countries. In the book’s introduction, he addresses the US public directly: “‘What is the solution?’ It’s up to you. The solution is up to you. The crisis will be solved when people understand, and worsens when they don’t. It’s that simple. And it’s that complicated.”

The American influence in the region is indispensable to understanding the history of violence in the region, but Óscar is not content to use Uncle Sam as a scapegoat or let local interests off the hook. He reserves his greatest scorn for “cowardly, cynical” local politicians. He blames the political class for the collapse of the controversial 2012 truce between MS-13 and Barrio 18, which halved the country’s murder rate, until the government declared it officially over in March 2014. Since the end of the truce, the homicide rate has skyrocketed to unprecedented levels – yet many of those who brokered it, including psychologists, teachers, senior police officers and prison wardens, have been handed criminal charges by the current government.

“They destroyed the truce and ended the most peaceful period this century,” Óscar says. “They chose votes and they don’t care about the bodies.” 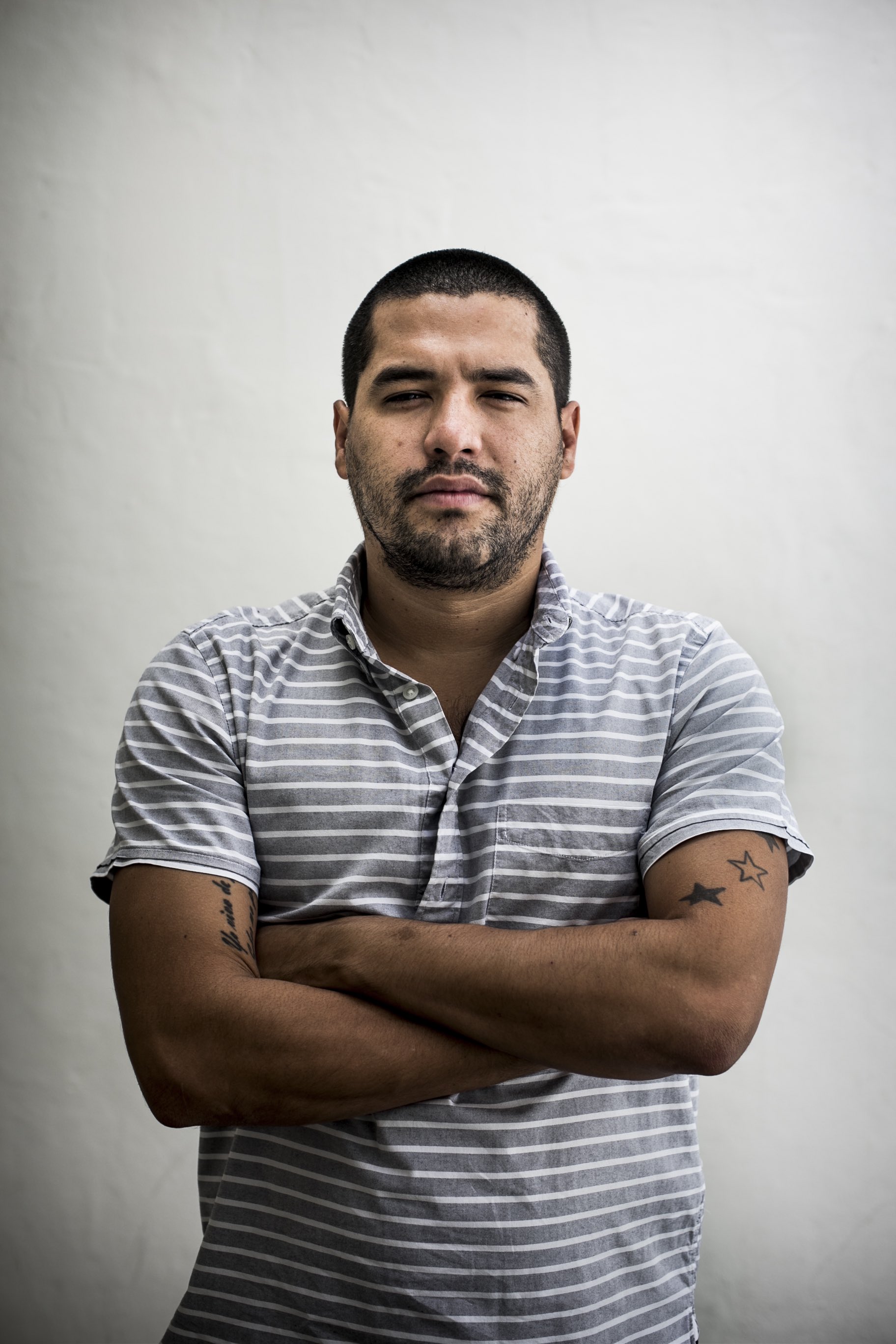 With violence predominantly confined to poorer neighbourhoods, there’s insufficient political will to truly tackle its causes. Out of sight, out of mind. Although dressed up in progressive rhetoric of social programmes and crime prevention, Óscar argues that current policy of the left-wing FMLN government is a return to the punitive populism of the mano dura or ‘Iron Fist’ policies of previous right-wing administrations: a violent confrontation with the gangs and the tacit approval of shoot-to-kill – which has resulted in extra-judicial killings, police massacres and a climbing murder rate. The Iron Fist approach has proven irresistible to politicians because it is popular at the ballot box and also far cheaper than carrying out the police, prison and judicial reforms the country desperately needs.

After being freed of constraints by politicians, an academic source argued the Salvadorian police operate under a logic of limpieza or social cleansing, more reminiscent of the civil war-era death squads than upholding the rule of law or community policing. To many, they appear like just another unaccountable, armed gang.

In the same way that Medellín, Colombia was synonymous with Pablo Escobar during the ’80s and Rio de Janeiro, Brazil with the favela drug lords during the ’90s, El Salvador has become synonymous with the violence of the Mara Salvatrucha and Barrio 18. The truce emerged as much as an effort to improve the tarnished reputation of the country, as an attempt to drastically reduce homicide rates in the short term, thus buying the fledgling government of Mauricio Funes some political breathing space from its critics.

But the truce was doomed to fail, because unlike Medellín or Rio, which were able to fund massive community development and violence reduction programmes, El Salvador is a small, poor Central American country. It has no major commodities or outside investors, like the US who pumped billions of dollars into Colombia, for example. Without the economic resources to improve the horrific conditions in notoriously overcrowded and gang-dominated prisons, invest in the communities most affected by gang violence or fund gang rehabilitation strategies, such as job-creation programmes, which gang leaders negotiated as terms of the truce, it was only a matter of time before the government’s inability to keep its promises led to the agreements’ collapse.

Óscar is pessimistic about the chances for a reduction in violence in the short term and sees little evidence of moves to address its long term causes. Without any avenues for El Salvador’s 60,000 gang members to reintegrate in to society and no moves to reduce the high levels of social and economic exclusion that have driven instability, he sees no happy ending in sight.

When politicians, economic elites and the public favour a hard line against the gangs, that makes Óscar’s task of challenging that counterproductive approach all the more important. To do that, he must not only investigate the wider structures of power that influence the gang war, but understand the lives and motivations of all those involved.

“My work has two objectives,” he says. “Firstly, make the lives of the corrupt people and politicians a bit more uncomfortable, to put what obstacles I can in their way. And secondly, to shine a light into all the dark corners of society – into the situation of the gangs, but also shine light into the world of the victims.”

After our conversation, Óscar goes off radar for a few days, resurfacing after La Sala Negra drop their latest political bombshell: releasing videos of the FMLN government in under the table negotiations with MS-13 and Barrio 18, with ministers offering their leaders up to $10 million in micro-credit.

The story undermines repeated denials from the political class that they negotiate with gangs – and Óscar is adamant that these conversations should be brought into the open. In fact, he argues the greatest unlearned lesson from the truce period is how much can be achieved by negotiating with MS-13 and Barrio 18.

“Even before truce, both the FMLN and the Arena [the former centre-right governing party] were talking with the gangs, but they were too cowardly to admit it,” he says. “People in El Salvador will hate to hear me say this, but it is possible to negotiate with the gangs. It’s hard to make the case for discussions with people who commit murder and extortion every day, but it proved it could produce results, at least in the short term. And there is no legitimate alternative, because after two decades of crisis in El Salvador – that’s longer than the 12 years of civil war – the government has proven it cannot defeat the gangs by force alone.”

What stands out above Óscar’s meticulous investigations and his captivating prose is his empathy for all those affected by El Salvador’s deadly cycle of violence. But to bring this cycle to an end, he feels society at large must invest the same effort into empathising with its victims – both gang members and civilians trapped in the neighbourhoods they control.

“It’s a real struggle for me to try to understand how people live in this environment, seeing violence around them their whole lives,” he explains. “In El Salvador there are millions of people who have never known peace. Gang members are seen as monsters but people need to realise that if they had grown up under the same conditions, they would be just as bad. Try to imagine never being able to leave the house and be confident that your kids will be safe or knowing that inside your kid’s school, there’s a huge criminal organisation like MS-13 trying to recruit. I want people to understand that tragedy and that bravery.”

A History of Violence: Living and Dying in Central America by Óscar Martinez is out now, published by Verso.

This article was updated on October 31 to include the Sala Negra report into the FMLN’s negotiations with the gangs.

Linkedin
RELATED ARTICLES
OTHER ARTICLES
Tristan O’Neill’s shots of dancers caught in moments of reverie at the height of rave’s golden age are a testament to the UK’s legendary club culture.
Photographer Becky Tyrell went down to the fading banger and stock raceway to meet a community desperate to keep it alive.
Photographer Sean Maung reflects on documenting a small town in Pennsylvania afflicted by high levels of unemployment, poverty, violence, crime, and addiction.
A new law change is enabling Britain’s donor-conceived children to know the truth about their origins – but campaigners say the fertility industry must do more to protect people.
A new exhibitions brings together the work of photographers who documented the deep unrest of these pivotal decades.
At his West Bank restaurant, Fadi Kattan established himself as the voice of modern Palestinian cuisine. Now, he’s bringing his innovative, bold flavours to the UK’s capital.