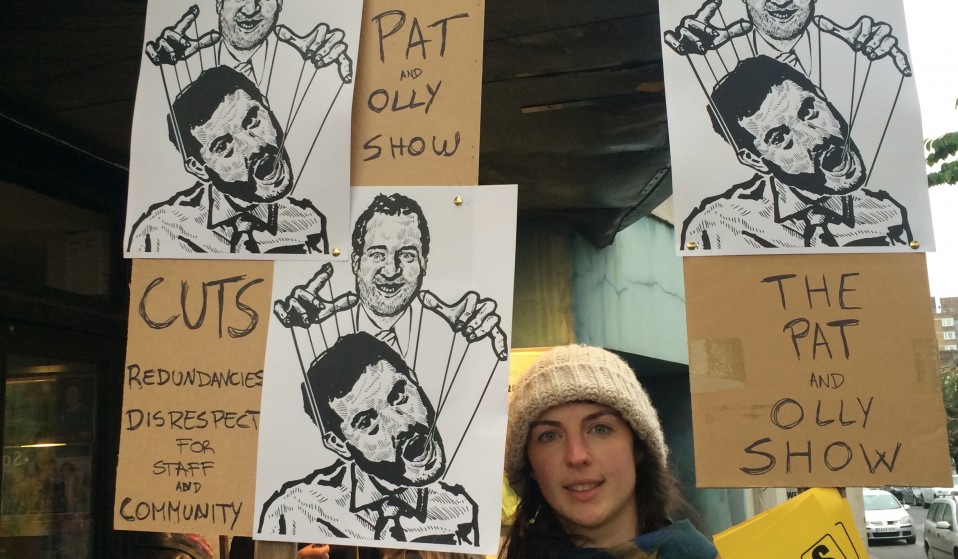 Hundreds join Dalston’s Rio Cinema picket line against mass redundancies, to “save the soul of the local community cinema”.

Hundreds join Dalston’s Rio Cinema picket line against mass redundancies, to “save the soul of the local community cinema”.

A strike at one East London cinema hopes to save a community asset that’s currently under threat – the Rio Cinema in Dalston.

The Rio’s near closure back in 2013 reflected a wider trend in the decline of independent, single-screen cinemas, despite audience figures growing across the board. According to figures published by the UK Cinema Association, nationwide cinema admissions grew from 157.5 million in 2014 to 171.5 million in 2015. “The advent of the multiplex, and record levels of investment in improving the theatrical experience (still ongoing), have seen admissions recover such that since 2000, they have remained (sometimes significantly so) above 150 million,” says the organisation.

Cuts to the Rio cinema staff team, however, are reflective of widespread cuts to cinema and film: in March this year it was announced that Creative England was being made to “streamline its film department due to budget constraints,” and late last year the BFI announced that its funding was to be cut by £1.3 million over the next four years. 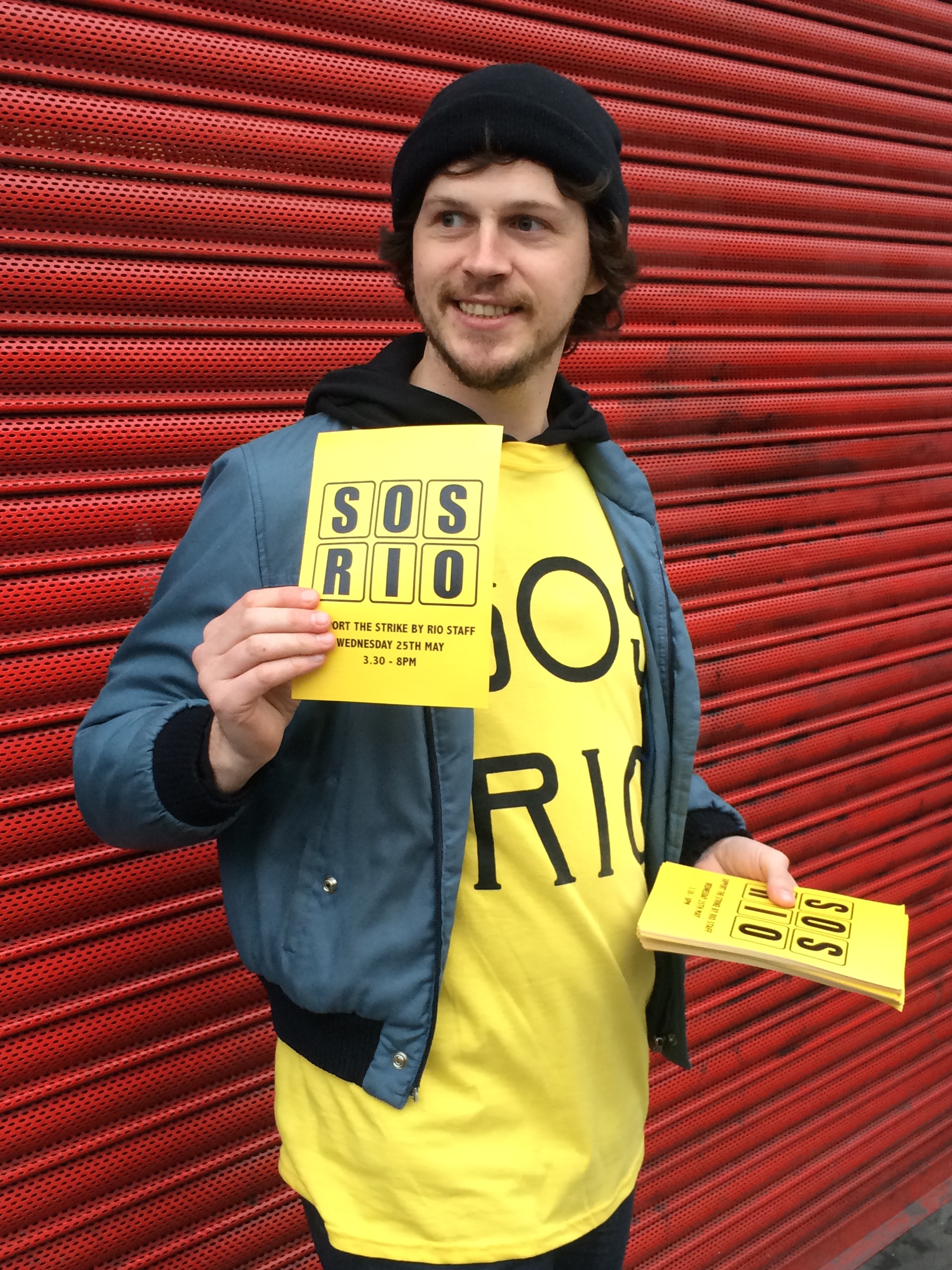 Around 400 people took to the picket line outside the cinema on Kingsland Road on Wednesday, railing against mass compulsory redundancies, restructuring, and the Rio’s refusal to pay the London Living Wage (LLW), which is currently £9.40 an hour.

With most of the cinema’s 30 full time, part time and casual contract employees and many more friends and advocates sporting yellow SOS Rio T-shirts, holding placards and handing out flyers, the crowd was a peaceful yet determined force against what’s going on. “A staff restructure is set to cut jobs, cut hours, cut salaries and marginalise investment in the community,” reads the SOS Rio campaign flyer. “The staff want change but not change that rips the heart out of The Rio!”

Filmmaker Julia Sukan del Rio, who helped coordinate the London Turkish Film Festival at the cinema, was among those on the picket line. “They’ve called it a restructure so they can have a smaller team”, she said, “but the job descriptions have been altered, or qualifications are suddenly needed, so effectively people have been dismissed.” 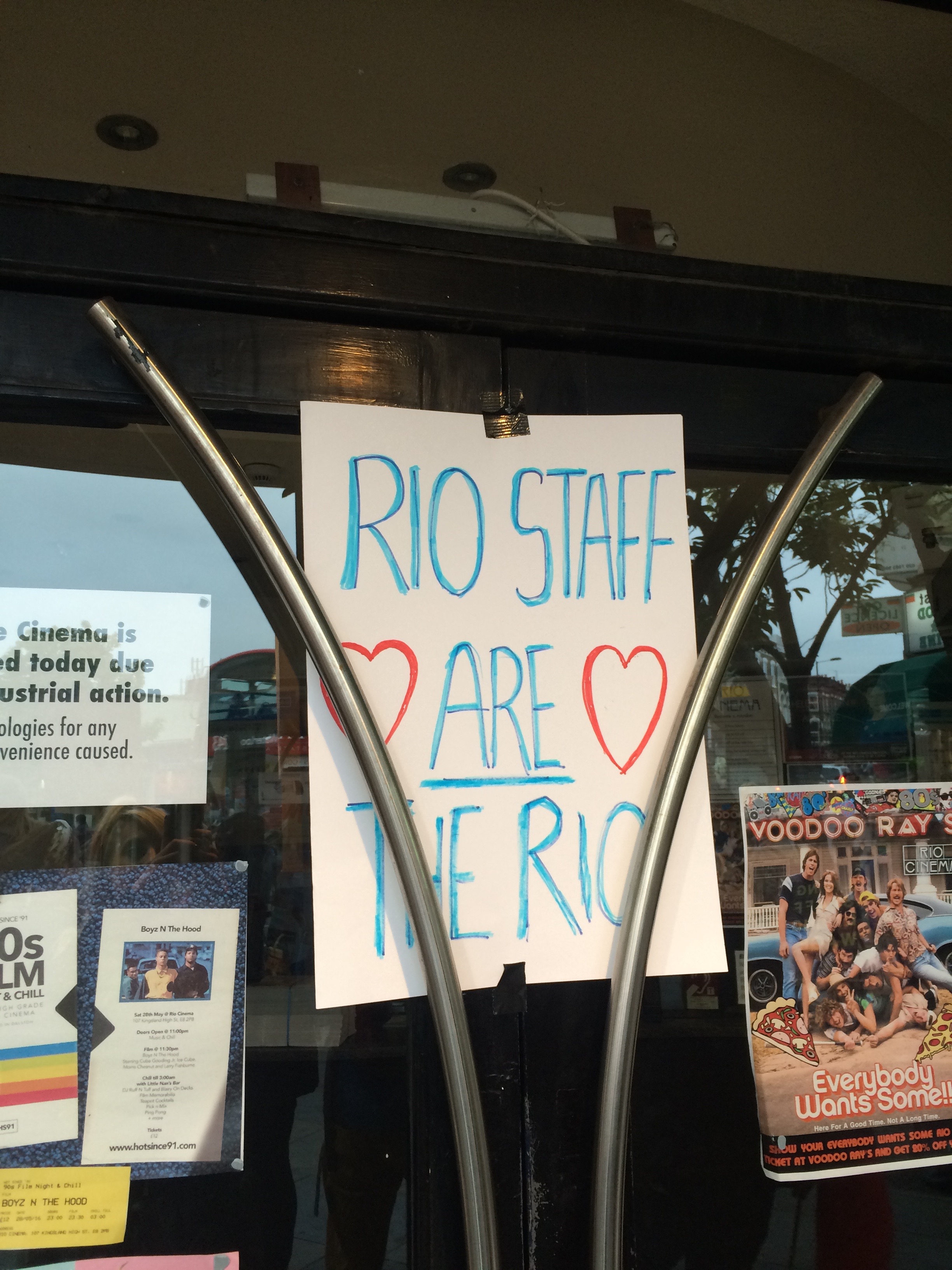 “It’s probably going to be the end of that community spirit and soul, that dedication and film geekiness from the staff. It’s so disappointing to see such a lack of support from higher management.”

Around half of the Rio employees are members of cinema worker, media and entertainment trade union BECTU, which has spearheaded the SOS Rio campaign and strike action. “What started out as a simple pay dispute has turned into a passionate ideological battle over the soul of one of the last community cinemas in London,” said Sofie Mason, a national official of BECTU to local paper the Hackney Citizen. 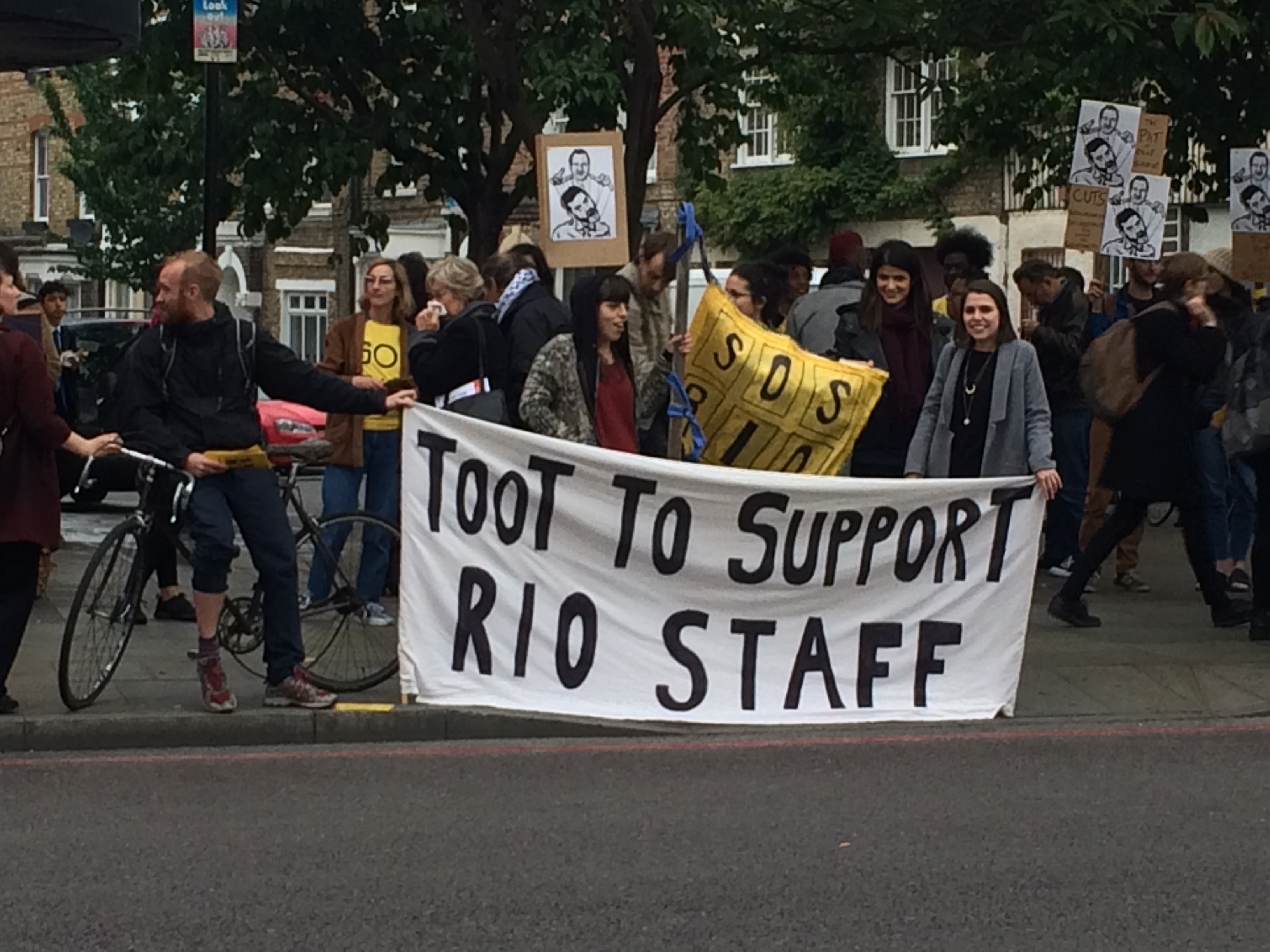 The strike comes three years after 2013’s announcement from the cinema’s board that the Rio was going under. To save it, staff agreed to a seven month-long 10 per cent pay cut; they asked for this to be repaid and for a pay rise in October 2015. The board offered a pay increase that worked out to £8.10 per hour for the lowest paid – £1.30 an hour shy of LLW – and this fed into the company-wide restructure that was being protested this week.

A statement on the Rio’s website concerning the industrial action reads: “We were saddened to receive an email from BECTU stating its intention ‘to induce members of the Union’ to take part in industrial action against the Rio, which is a registered charity, has no shareholders and returns all surpluses to the organisation and its staff in support of the Rio’s charitable activities.”

The fight for independent cinemas continues.

Linkedin
RELATED ARTICLES
OTHER ARTICLES
Taking us through one of the most dynamic years in recent history, Laylah Amatullah Barrayn new photo book contains tender yet confrontational portraits.
A group of aid workers face prison for helping to save people fleeing their homes at sea. If they are charged, it will have a chilling effect on humanitarian efforts.
After blocking the Scottish government’s gender recognition reform bill, Westminster is now devising further changes to the law to make it harder for trans people to self-identify.
Mass crustacean die-offs in the North East have led a community of fishermen to take action to save their seas.
Photographer Sean Maung reflects on documenting a small town in Pennsylvania afflicted by high levels of unemployment, poverty, violence, crime, and addiction.
After fleeing the war in Ukraine, people are finding it impossible to secure affordable and decent housing in the UK.