News & Politics / Reportage / Inside The Resistance: The young activists fighting for Venezuela’s future 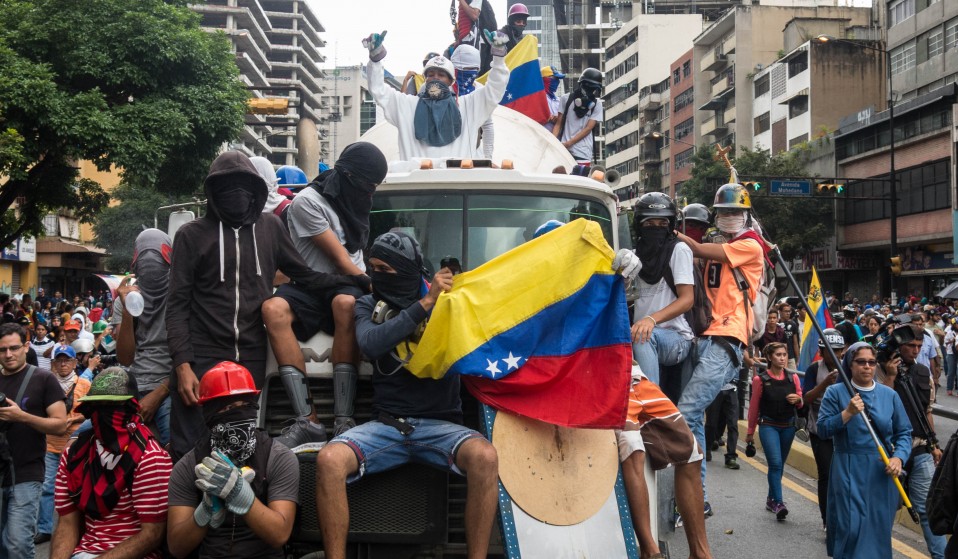 We hit the streets of Caracas with the youth of La Resistencia, a movement determined to see democracy return to Venezuela in the face of state violence.

Anti-government protests in Caracas have already paralysed the Venezuelan capital for months, young people fed up of a corrupt government as hunger and hyperinflation continue. Despite the state violence and constant repression, the resistance movement shows no signs of stopping.

The street is filled with fog and the mood is tense. Explosions sound when a large group of armed gunmen on motorbikes arrive, their riders all dressed in black, as a screaming crowd disperses looking for cover. It might sound like the opening of a Western, a Hollywood blockbuster with cattle thieves and bank robbers and a brooding sheriff, but these wounds and weapons are all too real. We are in Caracas, Venezuela’s capital city, where violent protests for the last four months have been pretty much constant.

On the other side of the smoke curtain an organised block of youngsters declines to run, instead protecting themselves behind DIY shields painted with anti-government slogans and the colours of the Venezuelan flag: red, yellow and blue. It’s here, behind this impromptu barricade, where you’ll find 24-year-old Alberto*. Caracas born and bred, he became an active member of the resistance in early 2017. While there’s been unrest in the South American country for years now – just look at the protests sparked by a murder in January 2014 –  it was in April 2017 that this wave of unrest became ever more volatile. 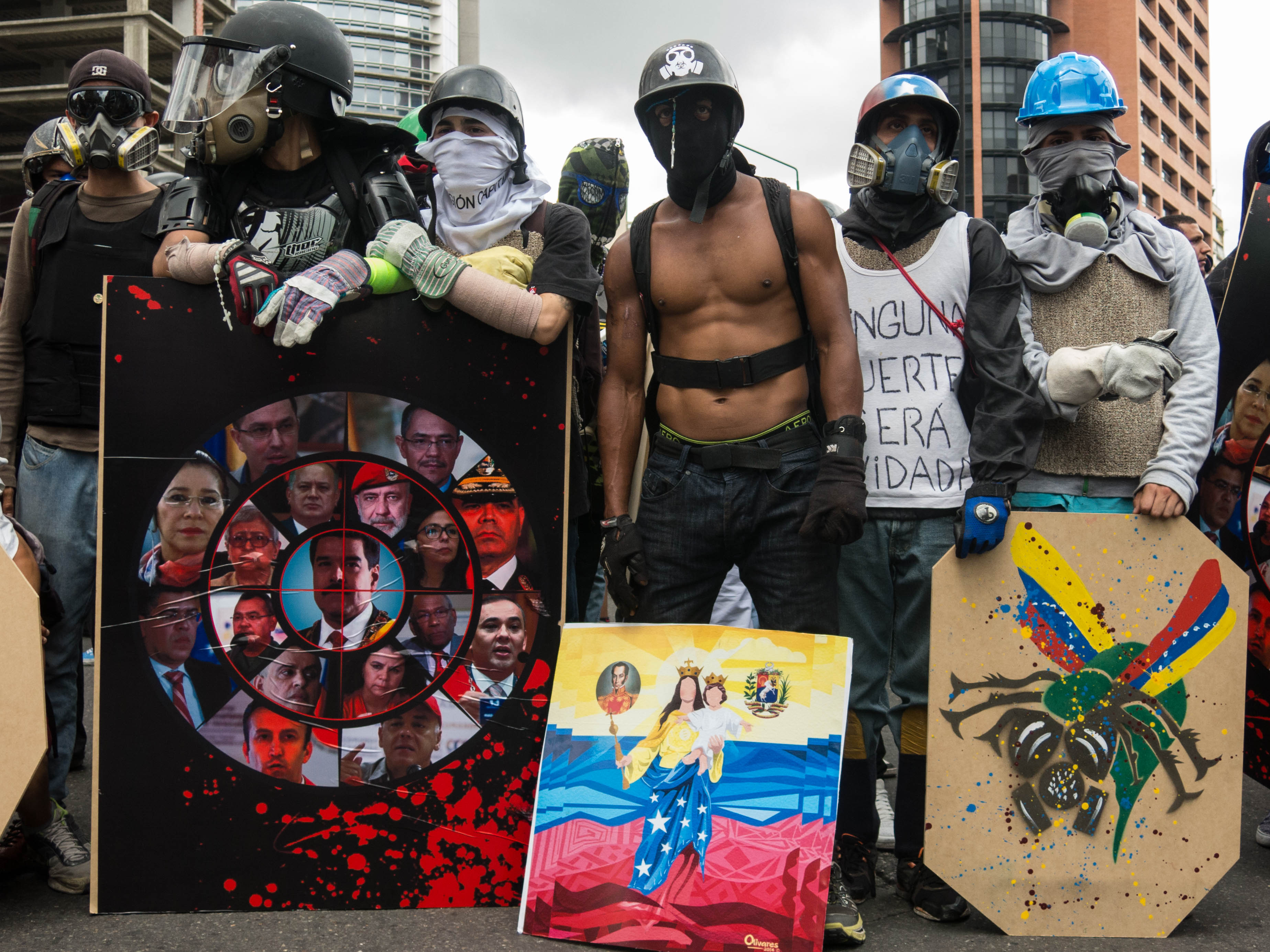 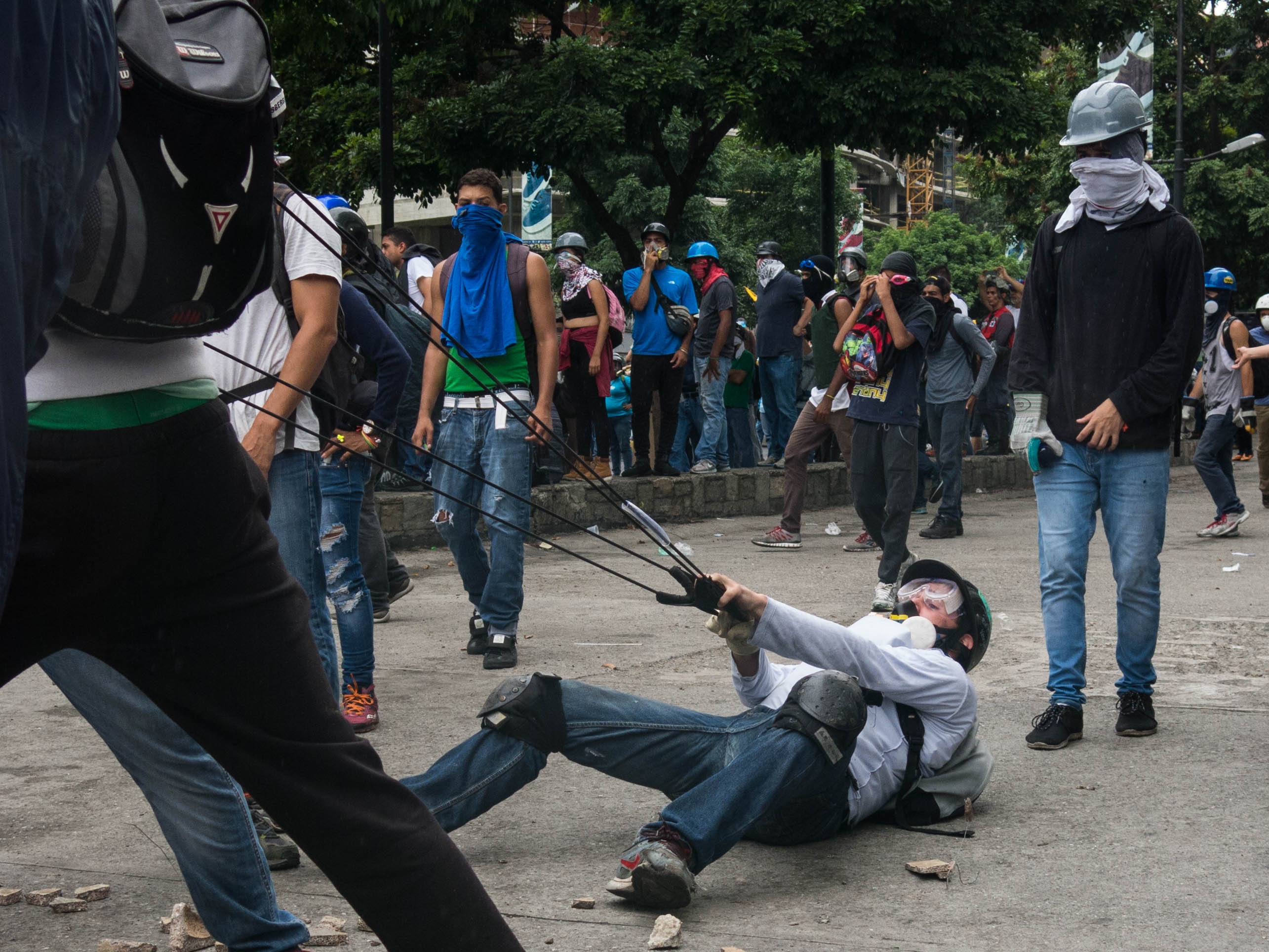 On May Day this year, just a few months ago, Alberto witnessed the repression and the harsh, brutal force used against protesters – many of whom were elderly, entire families too. Getting together with other young people in his neighbourhood Alberto joined The Resistance or ‘La Resistencia’ – a network of Venezuela’s youthful, militant partisans, determined to fightback against an undemocratic state.

When Alberto agrees to meet me, he makes it clear we must do so in public, petrified as he is that he’ll be abducted and made to disappear by the state, a worrying fate he tells me two of his friends have already met.

“We are a pacifistic resistance movement looking for change,” explains Alberto, when we meet at a discreet corner of one of Caracas’ universities in mid-June. “Personally, I want the government to change. In the last years we’ve seen death, repression, sadness and hunger. The health services do not function and education doesn’t work.” Alberto works as a teacher, and now finds himself in the classroom often on the brink of despair.

“It hurts, because I can teach democracy to my students, explain what liberty is, what it means to be a good citizen, but when they leave for the streets they will see the contrary. They will see the National Guard attack the people, when they come home they see them lashing out against their neighbours as they’re forced to swallow teargas.”

Meanwhile food and medicine is in short supply, the Venezuelan Bolívar (the country’s national currency) has experienced hyperinflation. Protesters are demanding the government halt human right abuses and call fresh elections, but President Maduro intends to rewrite the constitution by implementing a Constituent Assembly. If he succeeds on 30 July in effect his dictatorship will be cemented. 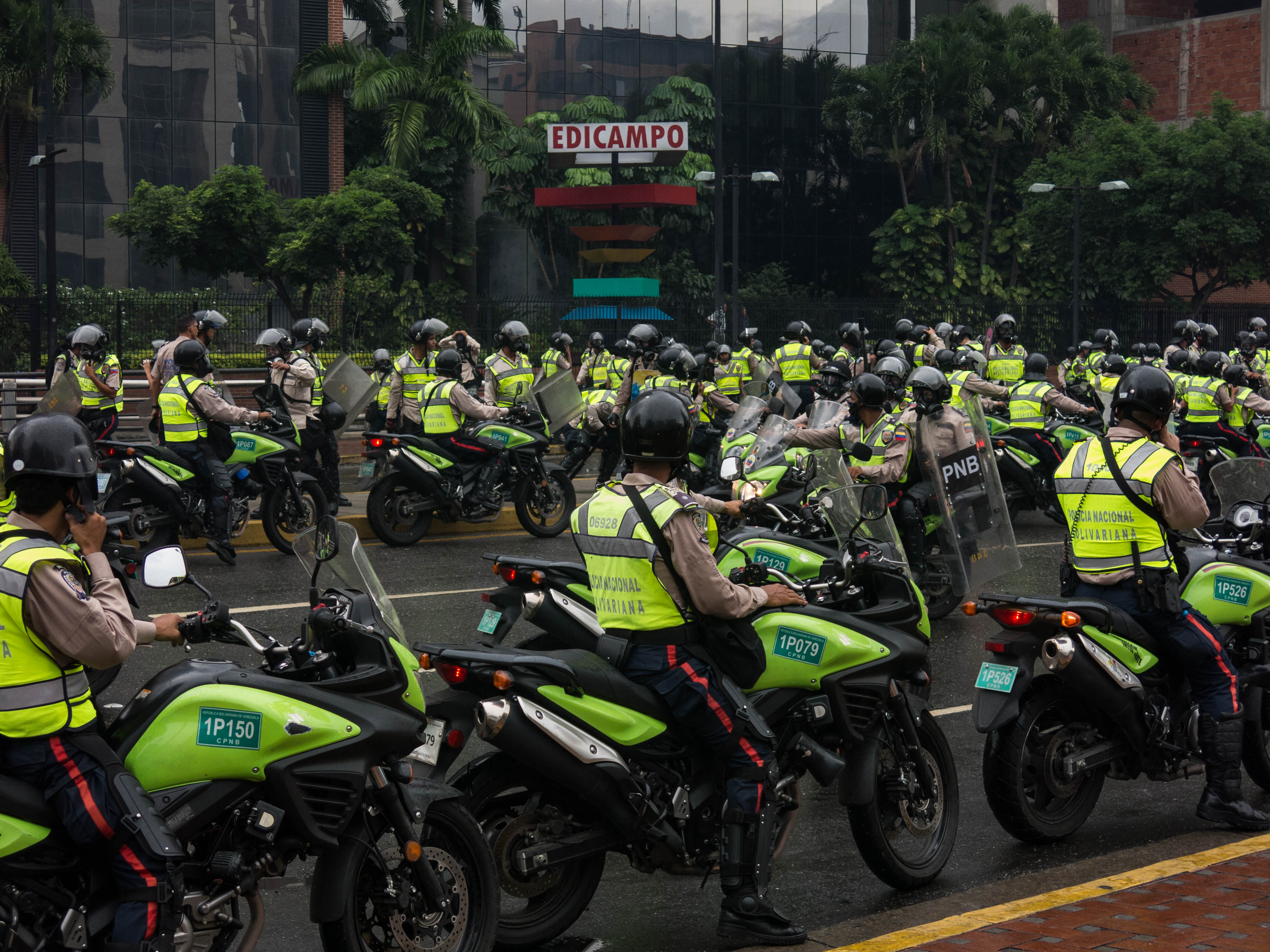 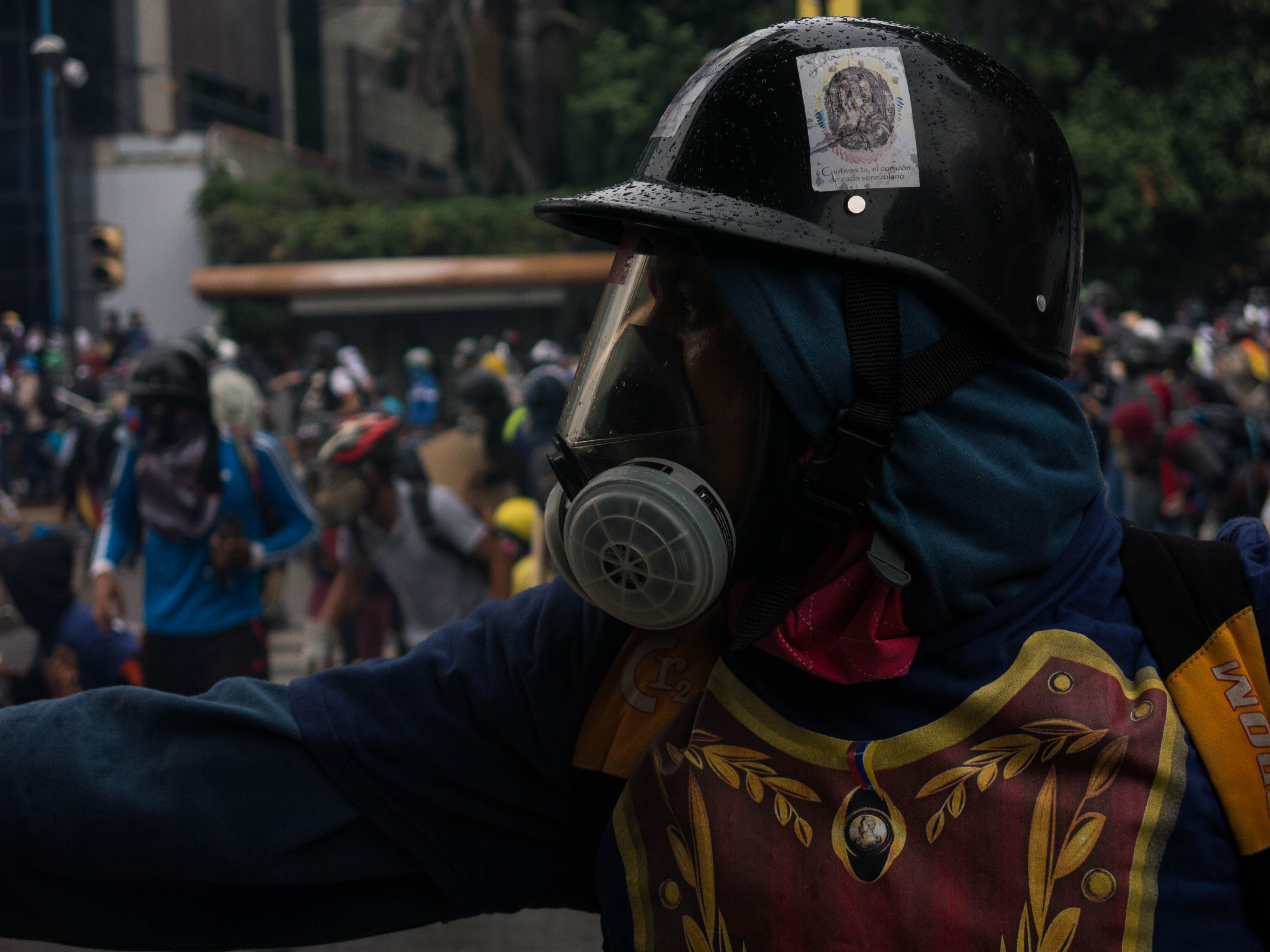 More than 100 people have died since the nationwide protests escalated in April, and almost 4,000 have been arrested.

Although well prepared, wearing gas masks and glasses for protection with gloves ready to pick up teargas grenades, The Resistance isn’t a movement on the offensive. “We do not call for violence. We wait for [pro-government forces] to act violently for us to react,” Alberto says. He tells me that he and his group form a buffer zone around women, the elderly and families who march behind them.

“We are up front to protect the masses, so that they can continue to march safely,” he adds, aware that it’ll only be with widespread, popular support that their movement can succeed.

Every day he receives a voice message from his mother, wishing him well. “It is difficult to say to my mother, ‘mother I’m leaving and I’m not sure if I come back’,” admits Alberto, “but I’m fighting for a just cause, for what she taught me to believe in.”

It’s a sentiment shared by the activists, students, graduates and young people who are putting their bodies on the line day and night, maintaining a critical mass on the streets not just in Caracas but nationwide.

Not all students in The Resistance are on the frontline fighting back against state violence. Some people, like 24-year-old Irene Ioannou, put on their helmets, gloves and gas masks, but not in preparation for battle. She alongside other volunteers is an emergency response paramedic – there to look after the wounded who so desperately need care. An industrial engineering student at the Andres Bello Catholic University, she is circling Caracas’ central Altamira Square when I first meet her, anxiously waiting for another day of unrest to begin.

The daughter of two medics, she uses her free time to improve her first aid skills, a practice she began as a young child. Now when protests kick off, she and other teams of student paramedics from various universities wade through the clouds of teargas, determined to get to the wounded despite the hostilities that surround them. 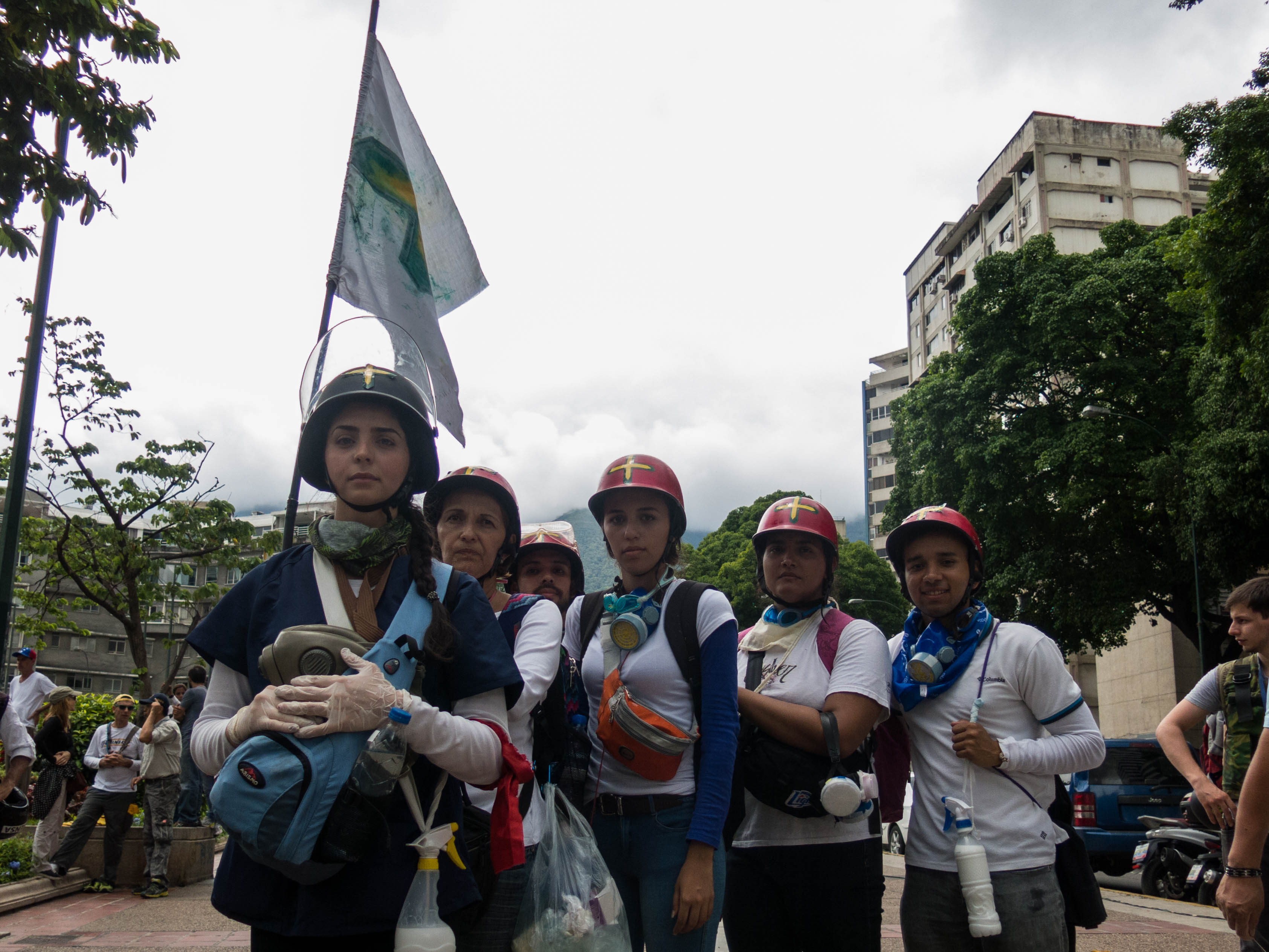 Irene and other medical volunteers

“We provide a health service for everybody, it does not matter if someone is part of the National Guard, a police officer or a protester,” explains Irene. “Most people we help are victims of shotgun ammunition, fire weapons and marbles.” Recently more and more protesters have bullet wounds she adds, while showing me the white flag with a green cross emblazoned upon it that she hopes will protect her and her team of six from being attacked.

As protests have increased in regularity and momentum, so too has the number of volunteers coming forward to join these DIY medial units. As they walk through the crowds they’re understandably met with hugs and nods of appreciation. Irene knows why they are so popular on the streets. “If we fall, thousands of people will fall,” she says, knowingly. Without their services countless more lives would be lost as official medical services stay away from the protests.

Volunteer medics don’t have the resources to invest in enough supplies. Even if they did, the shortage of medical equipment in the crisis-ridden country would make it impossible to be stocked up.

“The resources are used very fast because of the daily amount of people wounded,” explains a frustrated Irene. I ask what she needs. “Medical gloves, gauzes, saline solution, creams to treat burned skin and bruises, bandages, Maalox which is used against tear gas,” she replies, none of which are available.

She also talks of the psychological wounds that are set to scar her generation – the corpses on the street, the daily battles, the trauma that comes from repression.

Lexys Rendón is the director of Venezuelan NGO ‘Laboratorio de Paz’ (Laboratory of Peace). Her organisation, based in the capital city, calls itself a “citizens initiative”, determined to promote, through research, new technologies and grassroots activism a culture of peace and the demilitarisation of Venezuelan society.

“People go to the marches already with the expectation of being repressed,” she tells me, “and the repression is getting tougher by the day.” Make the short trip to the Central University of Venezuela (UCV) in the centre of the city and you’ll see just how true that is. 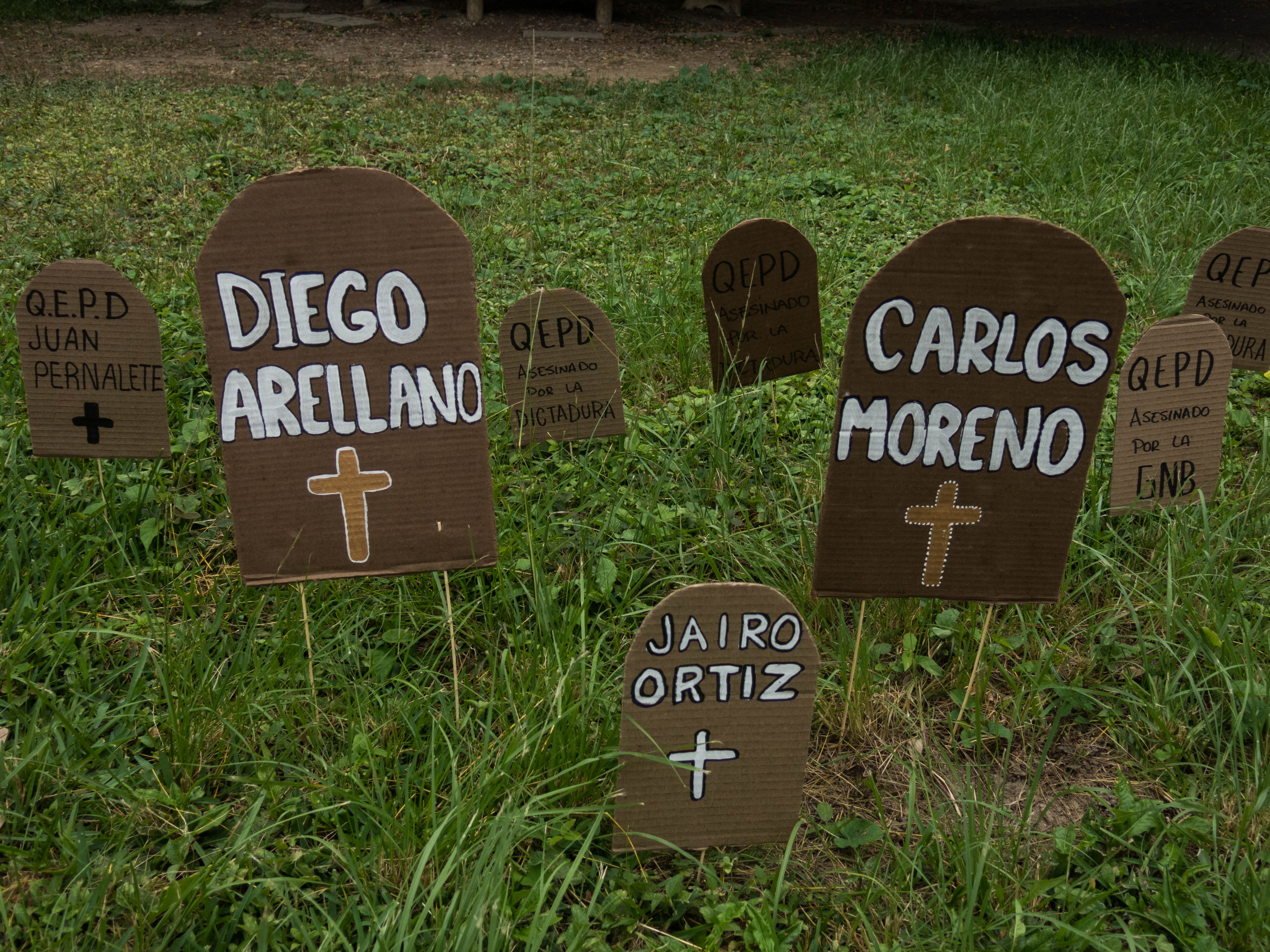 Hidden behind the faculty of social sciences at the UCV sits a plot of grass, where the names of “fallen” students are inscribed onto cardboard tombstones. Rafael Eduardo Álvarez Léon, a student in political and administrative studies from the UCV, sits down on a log in front of the memorial as he speaks of how his experiences on the streets have made him stronger.

“I received blows to the head, I got hit on my body and had cracks in my ribs – they hit me with various objects,” he tells me, describing a time the National Guard attacked him as he painted a message of resistance on the street outside Venezuela’s Supreme Court building.

He was detained for a weekend, a time he says was characterised by violence. He received no legal punishment – he reckons because any appearance in court would have let judges and the public see just how extensively he was beaten by the authorities.

“The detention not only motivated me to continue,” he says, “but also reminded me of the awful things this government is capable of doing to us, to any person that sets out to protest.” Rafael counts himself in some ways lucky – he says many youngsters have been tortured far more: locked up in rooms full of teargas, forced to drink urine, struck with electric shocks.

Despite the injuries, the imprisonment and the toll this constant fight is taking, Rafael is determined the movement won’t stop resisting. He believes it’ll only be through keeping a critical mass on the streets that the government will fall, allowing new democratic and open elections to be held.

“What else is left to the people, since all democratic channels are closed?” he asks.

His generation knows that the dysfunctional country needs to go back to basics to rebuild itself, a task they are willing to take on. As far as Rafael is concerned, those of all ages around the country are desperate to let them.

“We won’t stop taking to the streets or raising our voices until Maduro’s government stops destroying our country. That will be the moment we stop.” Until then, the resistance will continue.

*Alberto’s name has been changed to protect his identity.

Linkedin
RELATED ARTICLES
OTHER ARTICLES
Activists and campaigners are fighting back against new laws that would seriously undermine the ability to take industrial action, calling it an attack on fundamental workers' rights.
A new film from Berghaus traces the story of Adam Raja, who left behind a turbulent upbringing to discover the healing power of climbing.
As she gears up for the release of her first book, the 24-year-old climate activist talks standing up to authority and building a more inclusive movement.
At his West Bank restaurant, Fadi Kattan established himself as the voice of modern Palestinian cuisine. Now, he’s bringing his innovative, bold flavours to the UK’s capital.
A new podcast is opening up the conversation between trans women and trans amorous men in the hope of building coalitions.
After blocking the Scottish government’s gender recognition reform bill, Westminster is now devising further changes to the law to make it harder for trans people to self-identify.