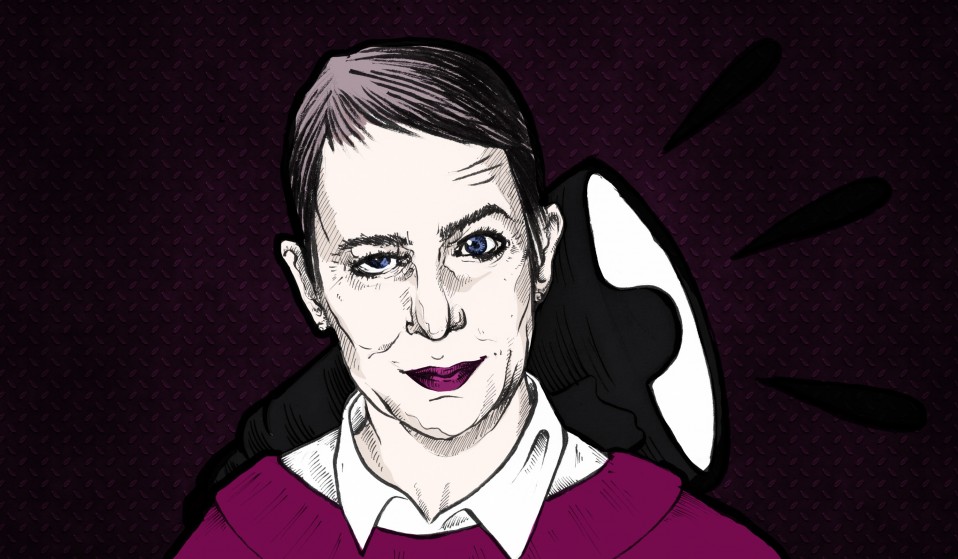 If you hoped Katie Hopkins getting dropped by the Mail and LBC would spell her end, think again.

If you hoped Katie Hopkins getting dropped by the Mail and LBC would spell her end, think again. She's now signed up to work for far-right outfit Rebel Media, which has ambitions to build a racist movement on Britain's streets.

After professional troll come-rent-a-racist Katie Hopkins was finally dropped by “mutual consent” from the Mail Online – having already lost her LBC radio show – it wasn’t entirely clear what would happen next for the pound shop bigot. Finally unwanted by the mainstream British media – her views no longer considered palatable by those for so long willing to profit from her hatred – she is now, somewhat unsurprisingly, continuing her journey towards the unpleasant corners of the British far-right.

Hopkins last week announced she will join Canadian-based Rebel Media (Rebel), a far-right operation which has boosted the careers of alt-right YouTubers, regularly pushed racist narratives, and has celebrated neo-Nazi violence. It looks set to be a bigoted, bad-taste marriage of convenience: Hopkins’ venom has now, finally, been banished from the mainstream airwaves while Rebel’s profile in Britain, its boss hopes, will be bolstered by securing Hopkins on the team. It’s certainly a less prestigious gig for Hopkins, but it’s one she’s unlikely to be fired from after a public campaign of outrage.

But Rebel isn’t just a platform; its model hopes to mobilise its viewers into action too – and with Hopkins’ established audience this could be a toxic combination.

Rebel itself was launched in Canada in early 2015 by right-wing former cable TV host Ezra Levant and has seen explosive growth – Rebel’s videos have been viewed over 300 million times on YouTube and the channel has over 800,000 subscribers. One of its correspondents played a role in the leaking of thousands of emails sent and received by French president Emmanuel Macron during the presidential campaign, leading Canadian politicians have slammed the site as a platform for the alt-right, and there have been calls for advertisers to boycott the outlet. While still relatively unknown in the United Kingdom, it is vying to get its campaigning ‘journalism’ heard.

Having been operating in Britain since early last year, the outfit has wasted no time in whipping up racial tension and pushing their reactionary agenda. They have been working closely with far-right organisations – largely because the people they have hired have been part of the British far-right for years. Founder and former leader of the anti-Muslim English Defence League (EDL) Tommy Robinson and former British National Party activist Jack Buckby are on their books already.

Robinson has led the site’s UK coverage: harassing journalists, demonising Muslims, turning up at court appearances and accusing rape defendants of being ‘Muslim paedophiles’ (earning himself a suspended sentence after being found in contempt of court) and hyping up a number of far-right protests.

Julia Ebner, a researcher into the far-right for the Institute of Strategic Dialogue, tells Huck that Robinson’s shows for Rebel “have been strongly focusing on Islamophobic and anti-immigrant narratives.” While the overall tone of the reporting is centred on a clash of cultures, it uses carefully selected language to not breach any hate speech laws. “The stories are often suggestive of racist narratives and conducive to conspiracy theories,” Ebner explains.

Spreading these narratives exacerbates racial and religious tensions and makes it easier for the far-right to recruit, but Rebel doesn’t stop there. Its UK employees regularly advertise far-right activity on their own social media accounts, and have helped far-right groups with promotional material. Shortly after the Westminster terror attack Rebel employees, including Robinson, met with Britain First’s Paul Golding and Jayda Fransen in a swanky Chelsea bar opposite the rented flat Rebel were using as a studio. Afterwards, Britain First announced a protest which the Rebel UK team helped to push online and then covered sympathetically.

After the Manchester Arena terror attack in June, the Rebel UK team went one step further, hijacking a protest organised by an EDL-linked LGBT group for themselves. Rebel posted a promotional video for a protest which saw thousands of far-right activists take to the streets, violently clashing with anti-racist protesters and intimidating a group of Sikhs helping the homeless.

One of the guest speakers at their Manchester protest, who has appeared on the YouTube channel on several occasions, was notorious anti-Muslim activist Anne Marie Waters, who announced her intention to stand in last year’s UKIP leadership contest in that very speech. The campaign manager for her leadership bid was none other than Rebel’s Jack Buckby, who works as a researcher for the channel. When Waters’ bid to drag UKIP further to the right failed she launched a new party, currently calling itself For Britain. Rebel were the only media company to attend the launch.

For the Manchester protest, Rebel were able to mobilise nearly six thousand people at a weeks notice. While these numbers might not look like much, they’re still relatively worrying given the UK’s anti-Muslim street movement has spent the past few years struggling to hold protests that hit attendance levels in the triple figures.

Rebel’s first two UK employees left the channel in August following a well-publicised dispute with Levant. They revealed details about the model Rebel has used to grow, claiming they were pressured to produce content which could be tied to campaigns for which petitions could be launched. This, they added, enabled Rebel to acquire data and build up its database of email addresses, which are then bombarded with links to content.

Visitors to Rebel’s new Hopkins site – distastefully labelled ‘Hopkinsworld’ – are already being asked to hand over their names and email addresses to be alerted whenever she publishes new content. And if Hopkins decides to support her colleagues’ organising efforts – which would take her from far-right pundit to far-right activist – the potential audience she could mobilise in Britain could be large.

Hopkins is arriving at an ideal time for Rebel. After the August 2017 rally in Charlottesville led by neo-Nazis, which left one dead and scores injured, Rebel went into meltdown. Levant sacked a popular correspondent who had been mocking anti-racist protesters just before a car mowed into them. The same presenter then appeared on a neo-Nazi podcast. Another was lured away by a rival channel offering more money. The meltdown and departures saw the channel’s subscribers fall in number by tens of thousands. Hopkins, Rebel hopes, will help them buck this trend.

Signing up with Rebel also works well for Hopkins – there aren’t many media outlets on the planet which have an audience who could be more receptive to her unashamed bigotry. The channel has even agreed to fund three or four large-scale “missions” for Hopkins which will see her travelling around the world to report on stories.

While Huck wouldn’t give Hopkins a platform to spread her dangerous and nasty views, in an interview last week we asked her why she signed up to Rebel and what she hopes to achieve there. “I need a platform that is not beholden to anybody,” says Hopkins. “When I say beholden to anybody I don’t mean an editor… Let’s take the example of the lobbyists inside the left-wing, some station’s are vulnerable to lobbying from them, others are vulnerable to lobbying the Muslim mafia or from the Jewish brigade.”

We asked Hopkins how she felt about working alongside the former EDL leader and former BNP activist Jack Buckby, who has a long track record of far-right organising. “I’m delighted with the people I’ll be working alongside,” she said. “When you think of me you think of migrants and anti-migrants and Muslim-bashing… which I appreciate is part of my portfolio which I’m proud of.”

When asked if it’s fair to call her a racist, Hopkins added: “I don’t mind what you call me, it doesn’t really matter if you call me a racist.”

Hopkins’ new position at Rebel is certainly less prestigious than her previous gigs, but the legitimacy some corners of the mainstream British media have long given her, combined with Rebel’s activist agenda, could make this new gig just as fruitful for the racist British right.

Linkedin
RELATED ARTICLES
OTHER ARTICLES
A group of young Palestinians have found temporary freedom in the act of parkour, reimagining wreckage and ruins as a series of high-octane playgrounds.
With skyrocketing rents, packed out viewings, bidding wars and more, renting in London has never been harder.
Rhiannon Adam spent three months capturing an ageing society wracked by division, isolation, and the aftermath of scandal.
Photographer David Corio’s archive offers a glimpse inside a revolutionary era of music and nightlife.
Following the announcement of an 80% hike in the energy price cap from 1st October, crowds gathered outside the offices of energy regulator Ofgem to protest and declare their intention to undertake a payment strike.
Financial turmoil is pushing people who work in the sex industry into more dangerous and desperate situations as a means of survival.