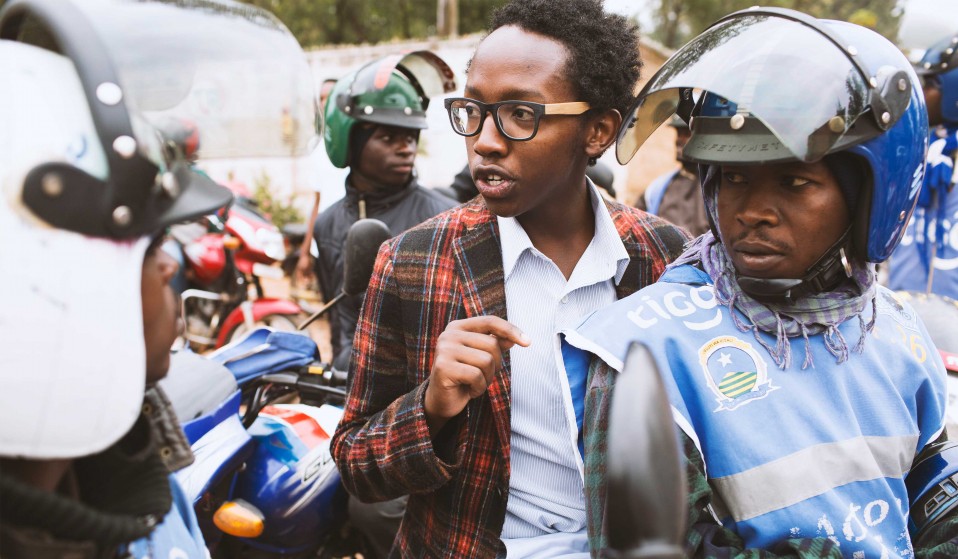 Road accidents are the second biggest killer in Africa, after HIV/AIDS. But SafeMotos are fuelling a tech boom with their life-saving app in Kigali – and beyond.

Road accidents are the second biggest killer in Africa, after HIV/AIDS. But Peter Kariuki and Barrett Nash are defying the stats and fuelling a tech boom with their life-saving app in Kigali – and beyond.

There’s a traffic jam developing outside the busy Remera bus station in central Kigali, Rwanda’s capital. More and more mototaxis join the crowd, trying to see what all the commotion is about. At the heart of the tangle of revving motorbikes, tech entrepreneurs Peter Kariuki and Barrett Nash are demonstrating their innovative new app, SafeMotos. Curious drivers ask about how it works and the registered drivers proudly explain that they’re connected to potential passengers via their smartphones.

SafeMotos has been billed as Africa’s answer to Uber – but it’s so much more than that. The app is designed to reduce the shocking level of preventable deaths on the continent’s roads. It encourages safer driving and ensures that responsible drivers are rewarded with a stable income by helping them stand out in a crowded marketplace.

For founders Peter, twenty-three, from the small Kenyan village of Engineer, two hours north of Nairobi, and Barrett, twenty-eight, from Vancouver, their vision goes much further. Two decades after the Rwandan genocide, the small African nation is rapidly making strides towards becoming a tech powerhouse – with the fastest Internet and cheapest data on the continent. The pair have positioned themselves at the heart of a growing community of ambitious tech entrepreneurs, coders and developers, helping to establish Kigali as the “test kitchen for tech disruption in Africa” and transform the continent’s relationship with the rest of the world. 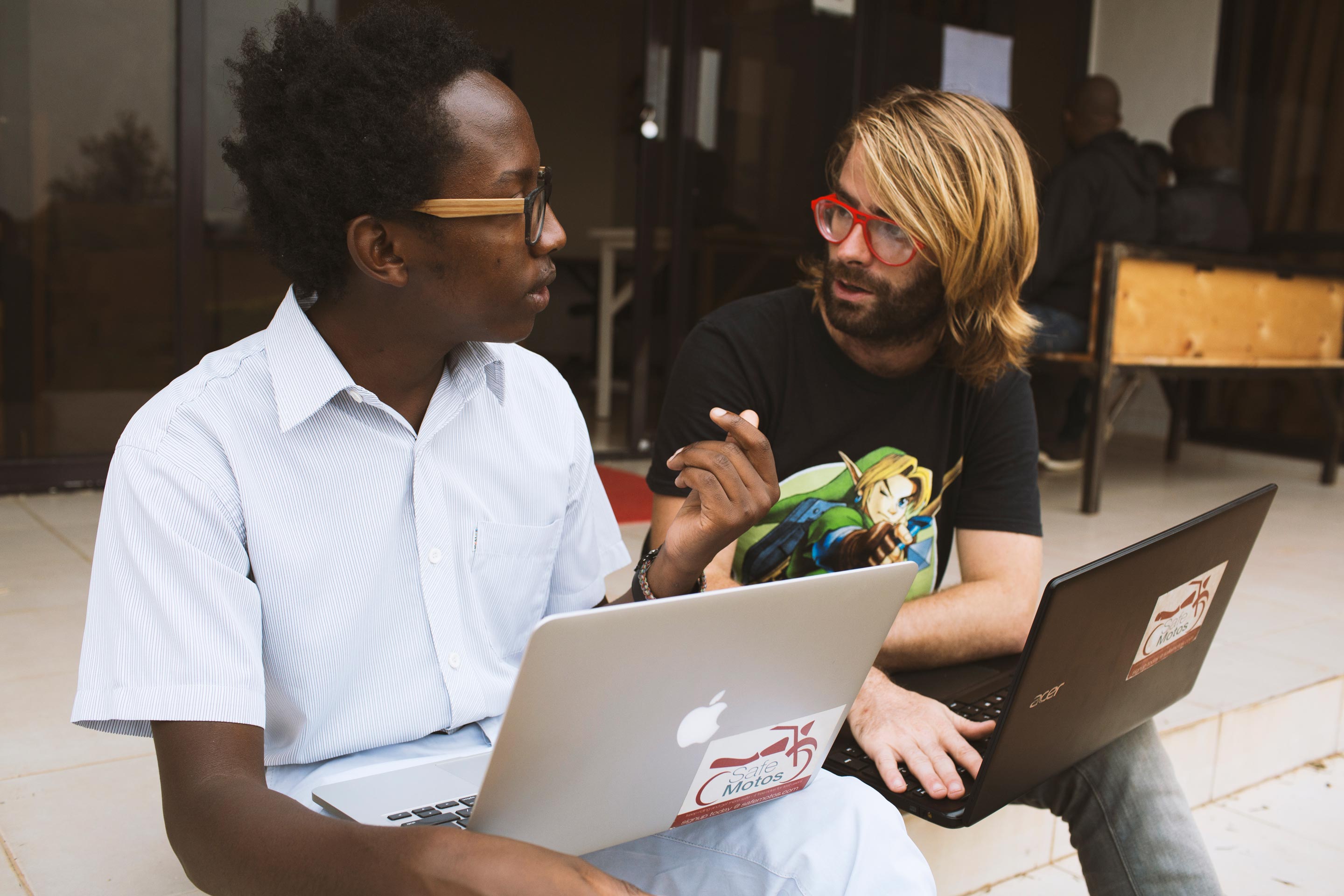 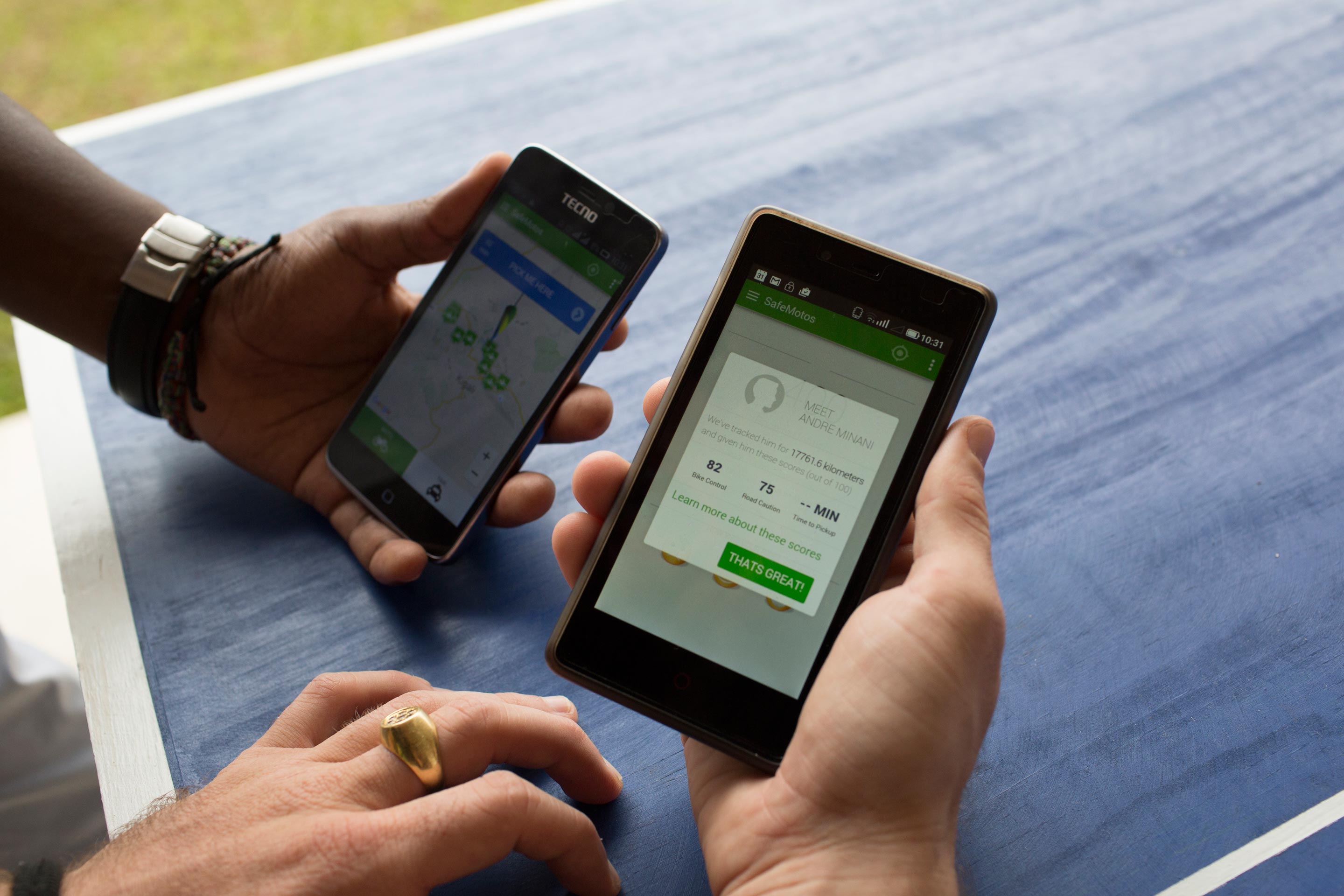 But let’s start with Africa’s ubiquitous mototaxis. Low- and middle-income countries have around half the world’s registered vehicles, but they make up ninety per cent of road traffic deaths globally. In Rwanda, for example, you’re 363 times more likely to be killed as a motorist than you are in the UK – and eighty per cent of accidents involve mototaxis. After HIV/AIDS, it’s the second biggest killer on the continent and will take the top spot in the next two years.

For Peter and Barrett, on a wet June evening last year, the statistics became all too real: riding home on separate mototaxis, a truck pulled out in front. The drivers hit the brakes hard, but on the slippery tarmac it was too late. “I watched Peter slam into the side of the truck,” Barrett explains. “I thought, ‘Oh shit, my best friend is dead.’ I hit it right after him, looked up at the dent I made and remember wondering, ‘Can I walk now?’” Barrett escaped without serious injury, but Peter broke three teeth and had to be rushed to the nearest hospital.

“The first mototaxi you see, you’ve got no idea if he’s just coming back from the hospital after killing ten people or if he’s a really good driver,” Barrett explains. “But when you hop on the back, you know almost immediately if they’re a bad driver. That’s kind of where the idea for SafeMotos came from: if I can feel I’ve made a mistake with this driver, how can we scale that?” Interested drivers with at least three years experience are given a smartphone and the SafeMotos app, which records their speed, acceleration, GPS and gyroscope information. The data is analysed remotely and combined with passenger feedback to arrive at an overall safety rating and drivers must score over ninety per cent.

Rwanda has invested heavily in its tech infrastructure, but it will take developers like Peter and Barret, who are passionate about using technology to improve people’s lives, to unlock its full potential. “Rwanda is doing its best to create a platform for technology and start-ups,” Peter explains. “Ordinary people hear on the radio that we have the fastest Internet, we have fibre optic, but they rarely get to feel the impact of that. I feel we’re bringing technology to them, right at this level.” 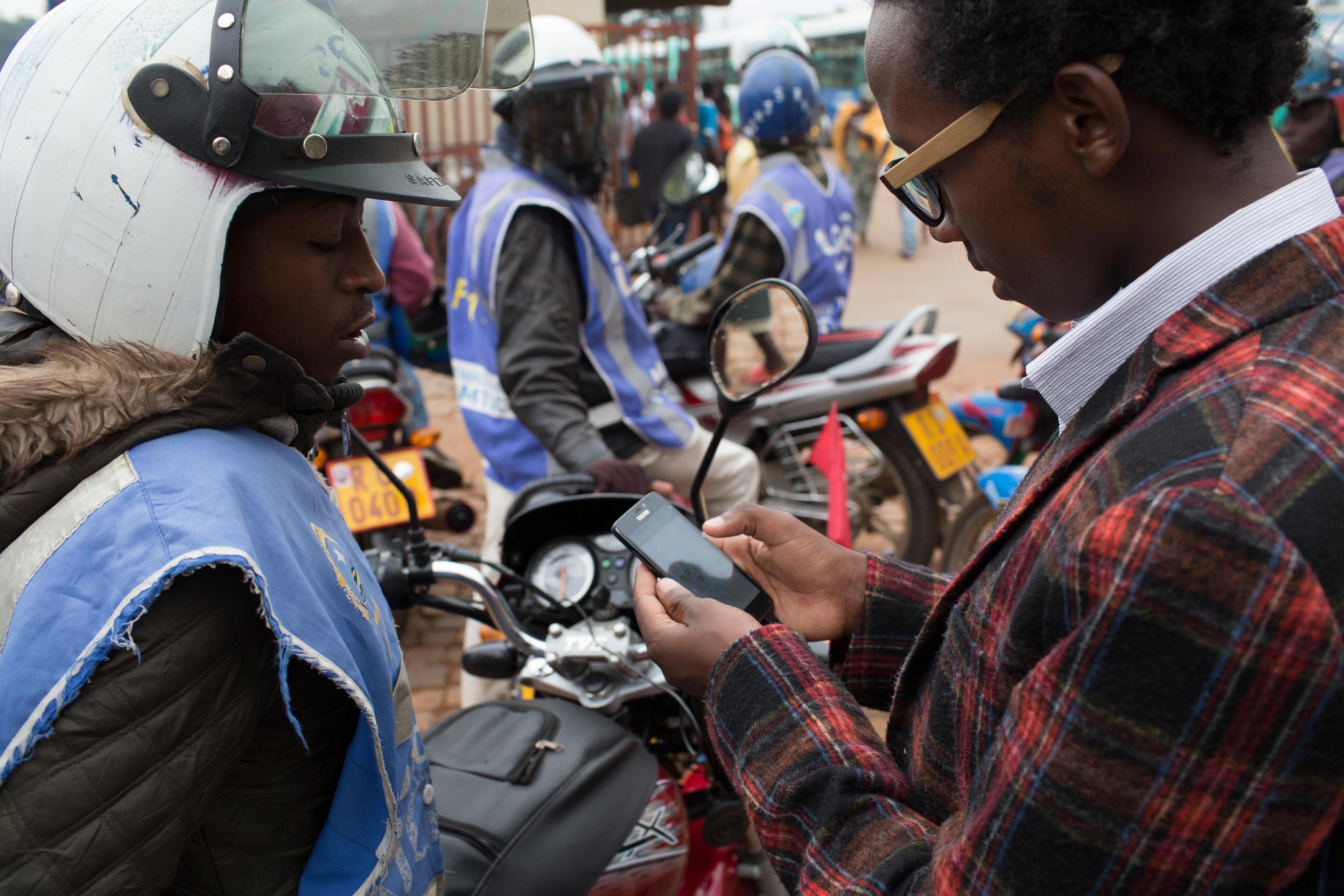 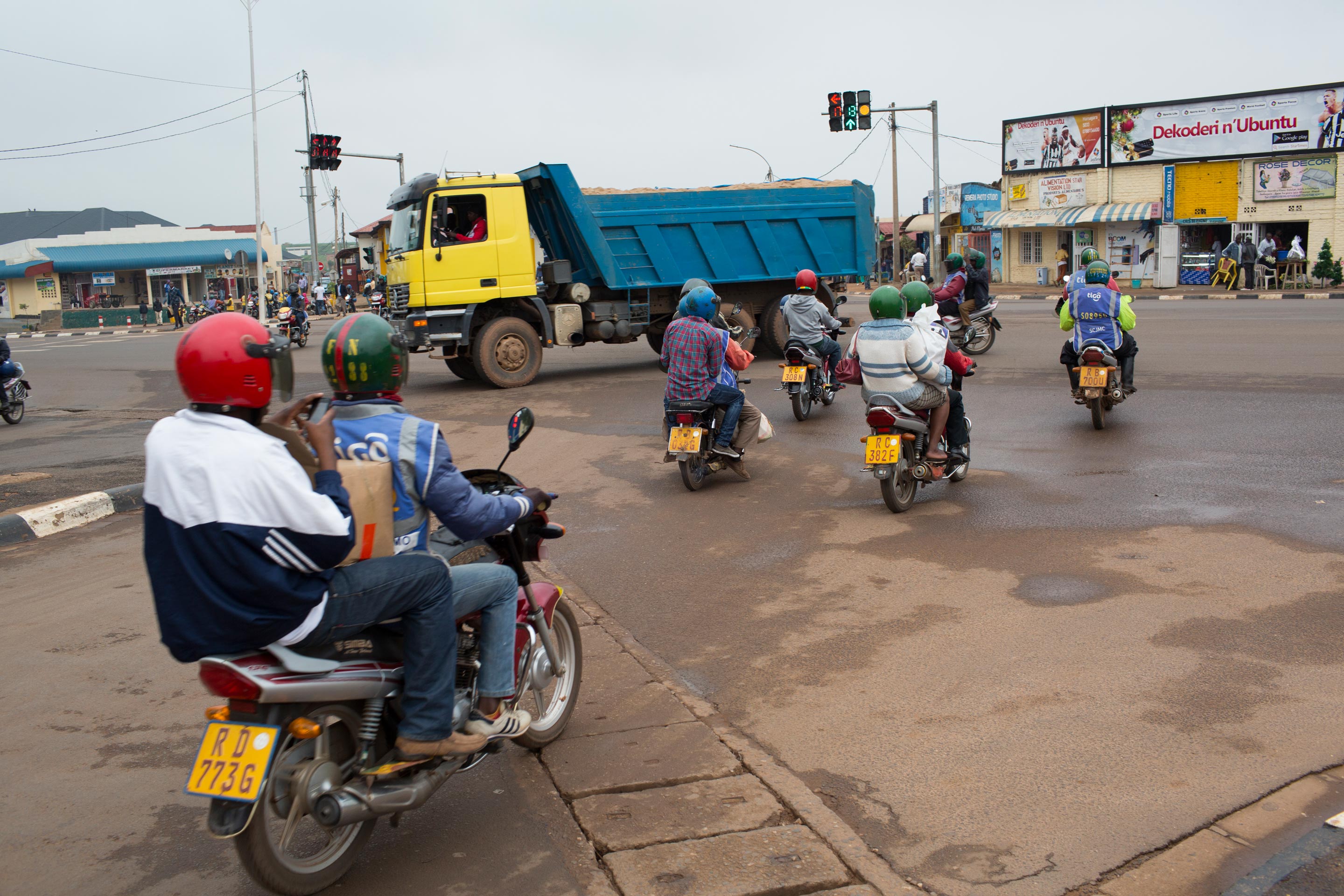 In Rwanda, over eighty per cent of homes still have no electricity and the median income is around two dollars per day. Solving Africa’s unique problems requires a level of local understanding that international companies and aid agencies ‘trying to help’ often lack. Copying what works in the West rarely succeeds. “One of the big things is realising that the conditions on the ground are different,” Peter explains. For example, SafeMotos found that most drivers can’t read maps, making dropping pins difficult, so they developed a bespoke landmark-based navigation system.

Peter explains African tech growth is still constrained by a lack of money, expertise and an ecosystem capable of developing talented problem solvers. “All we need is builders,” he says. “People should be learning: how do we take an idea and convert it into an app or piece of software?” But when things go right, success can be huge: like Kenyan mobile payment system M-Pesa, which has taken the developing world by storm.

“Right now, I think technology is the most effective way to confront a lot of the world’s challenges,” Barrett explains. Especially for countries like Rwanda, it could be crucial in bridging the development gap. “How do you measure development?” he asks. “If we’re getting five per cent growth per year we’re good, right? But honestly, fuck that. Right now, the convergence rate to American GDP per capita for sub-Saharan Africa is about 300 years. How can the global community accept that these guys won’t have the same standard of living as us for the next three centuries? So how do we disrupt that? How do we disrupt the model of a country? We need to be thinking beyond five per cent per year, looking at 500 or 5,000 per cent, and I really think technology is the only way we can achieve that.”

Find out more about SafeMotos.

Linkedin
RELATED ARTICLES
OTHER ARTICLES
While the popular news aggregation service has been kicked off Twitter, its demise does not spell the end of digestible misinformation.
In the UK, Hongkongers are continuing to stand in solidarity with the pro-democracy movement.
Hundreds gathered together to protest the policing bill by making as much of a racket as possible.
While the Colston 4 verdict is worth celebrating, it‘s debatable whether the law would’ve had such empathy for Black people in the same position.
In 1984, Martin Shakeshaft set out to document the miner’s strike as it really happened, using his photography as a tool for activism.
From Brooklyn gang members, to Welsh miners and the residents of East Harlem, Bruce Davidson used his camera to shine a light on the most marginalised.