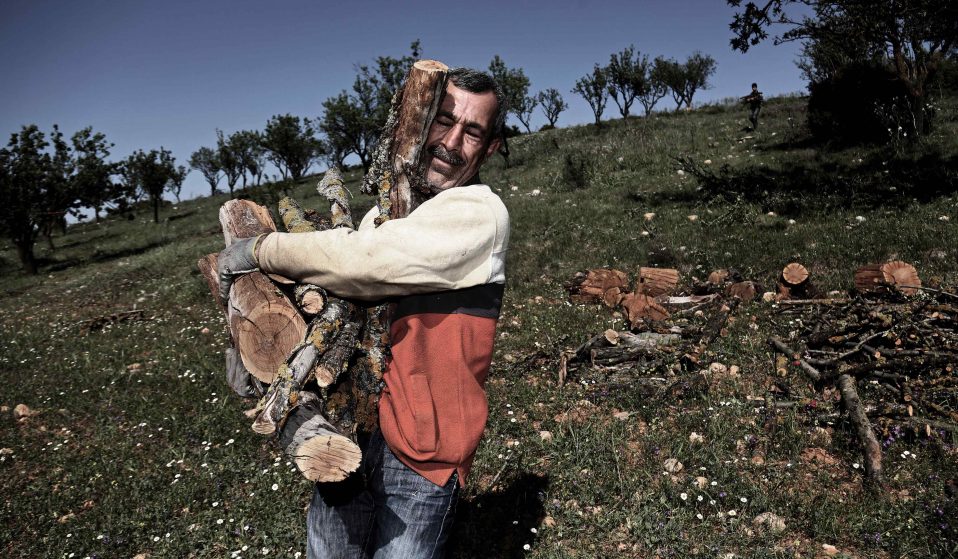 Just outside of Athens, a group of people have built a community that serves as an alternative to the indignity of refugee camps.

Just outside of Athens, a group of people have built a community that serves as an alternative to the indignity of refugee camps. Led by the enigmatic Kastro, this experiment in self-sufficient living has created a space in which everyone has an equal stake.

Embers rise into the night sky. Kastro reaches a hand into the tall stone oven to light his cigarette. With a shovel, he makes room for the loaves of bread he has been preparing. In between drags of a cigarette, he sings folk ballads in both Greek and Arabic as he pours ingredients into a deep plastic mixing bowl: flour, butter, tahini, red wine, black sesame, sugar, wild honey and sunflower seeds – most of which has been grown on the farm that surrounds us, now all but invisible despite the glow of the full moon.

There are currently around 100,000 refugees in Greece, and almost half are living in horrendous camps that have been locked down and largely abandoned due to the coronavirus pandemic. But just outside the small village of Plataea, a 60-minute drive from Athens, lies an alternative to that indignity. Known as the Solidarity Fields, this experiment in rural self-organisation began in 2016, when Kastro and a group of others came together to rent a patch of abandoned land so that they could begin cultivating their own food. The project quickly snowballed. Today, rather than relying on charity, many families from Syria, Iraq, Palestine and beyond live on the farm, participating equally in work and decision-making, while growing enough produce to feed themselves and other similar projects in Athens.

Kastro is something of a mythical figure among Athens’ refugee solidarity movement. He was born Suleiman Dakdouk in 1969 in Tartus, on Syria’s Mediterranean coast. Aged just 13, he discovered Marxism, joined a left-wing group which opposed Hafez al-Assad’s brutal Ba’athist regime, and was expelled from school after protesting against mandatory military drills. At 16, he was tortured by Assad’s security services and had two nails ripped out with a coin. He then went on to fight in Lebanon alongside the Palestine Liberation Organisation, before growing disillusioned with the war and returning to Damascus to study at the School of Fine Arts. 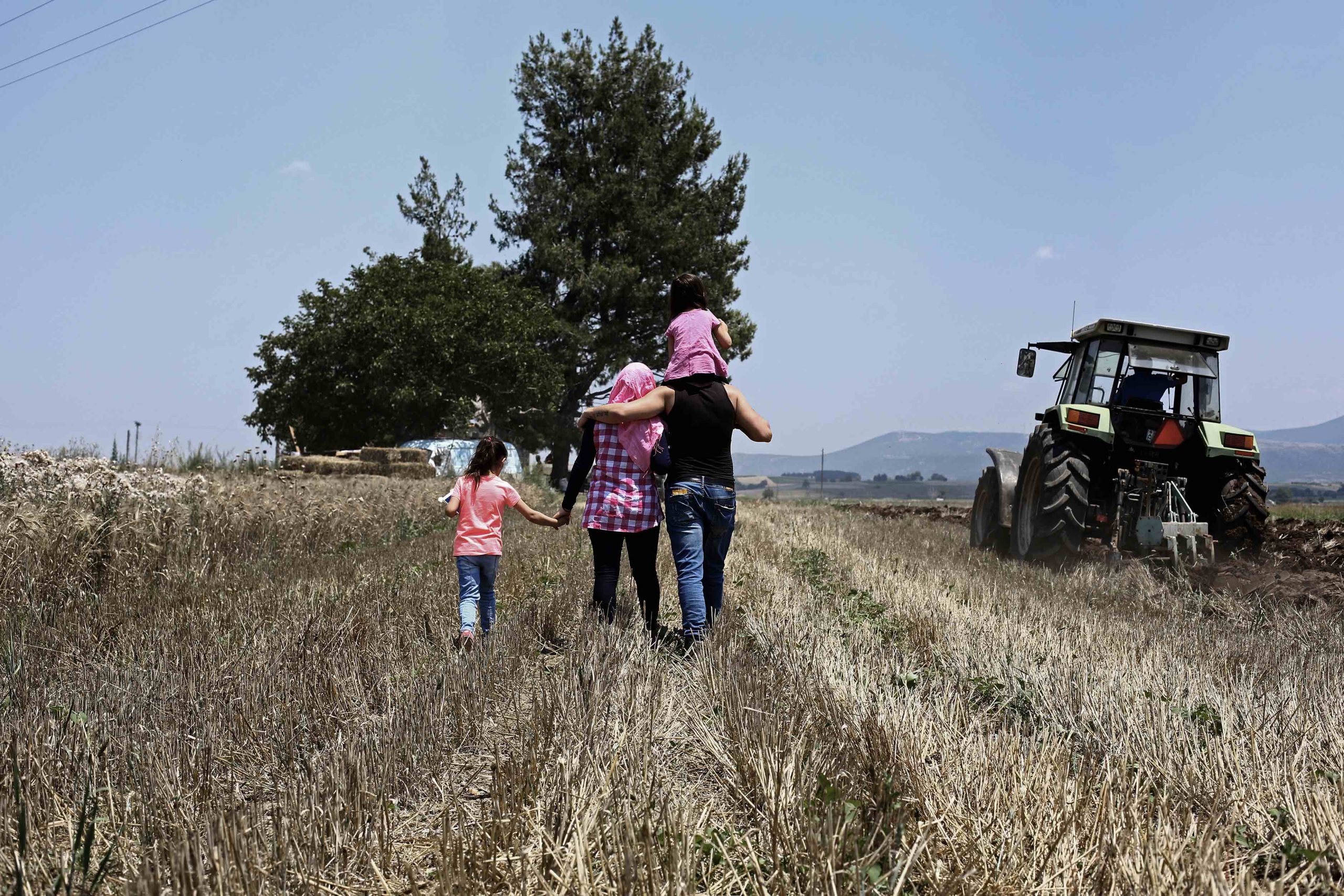 In the aftermath of the 1982 Hama massacre – Assad’s response to a Muslim Brotherhood-led uprising – the Syrian regime was clamping down on opposition groups. To avoid being conscripted into the army, Kastro hid in a camp for Palestinian refugees in Damascus for a year. After realising the situation in his home country had become unbearable, he left through the port of Latakia and arrived in Piraeus, Greece – via Cyprus and Rhodes – in 1989.

For the next 17 years, Kastro – whose father first bestowed him with the nickname he now uses full-time – lived in different cities in Crete, where he continued to make art alongside manual labour jobs. After the collapse of the communist regimes in Eastern Europe, thousands of Romanians, Poles and Albanians migrated to Crete to join the many Syrians, Egyptians and Pakistanis already working in the fields or on building sites. Many employers took advantage of the situation by reporting workers without papers to the authorities to get out of paying them. This spurred Kastro to begin organising with fellow immigrant workers to enter unions.

They won numerous protections, taught language skills and helped many get legal paperwork. But today, when he looks back at that time, Kastro is most proud of helping create a “culture of coexistence” amongst immigrants, refugees and the local community – an aspiration he has carried with him in every subsequent project, including the farm. “Wherever they come from, people are together here,” he says. 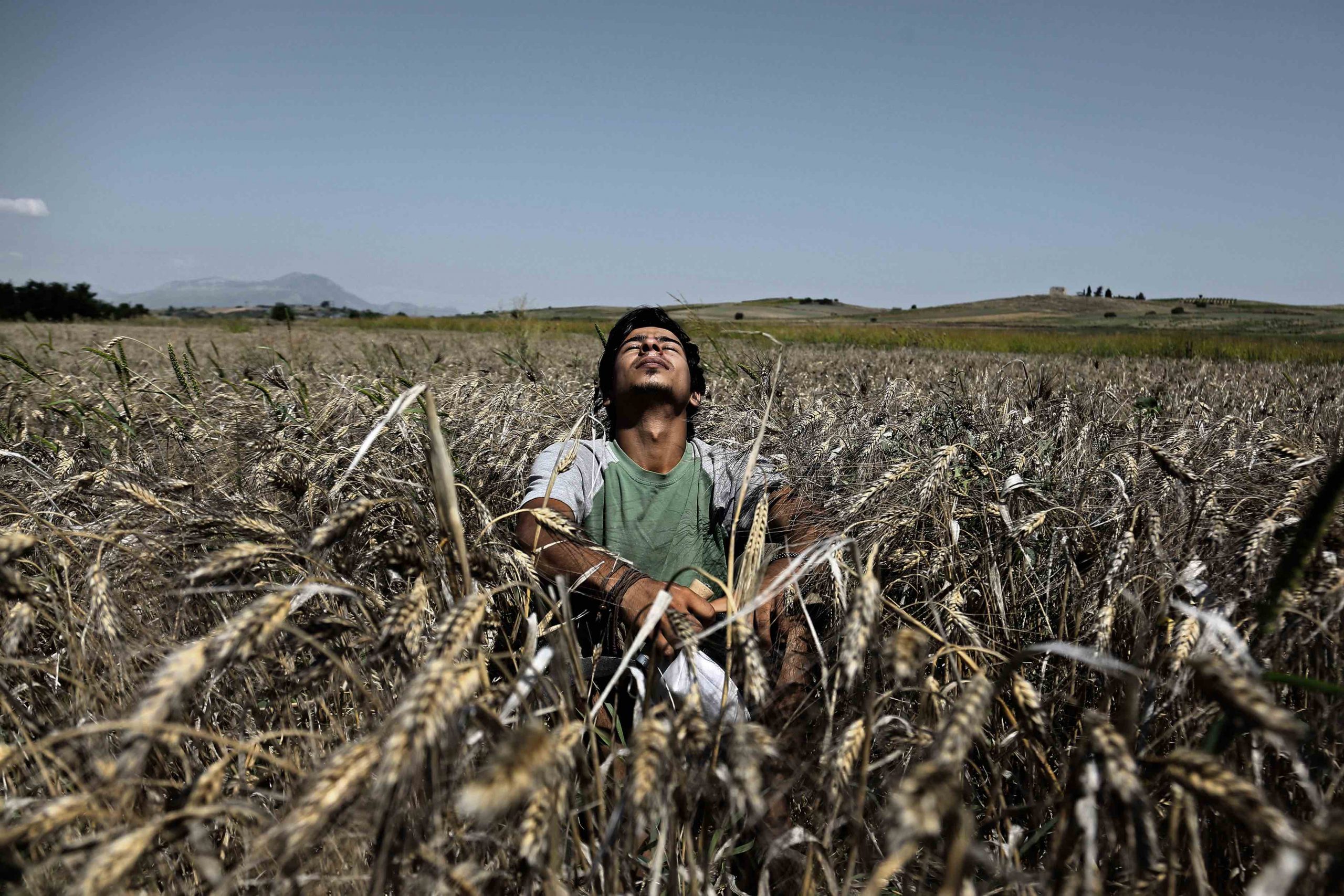 Kastro explains that his vision for the Solidarity Fields is of a place where refugees can find freedom and independence through growing their own food. Indeed, many of those who have lived here over the years were farmers back home, who felt out of place in the cities of their adopted countries. Much of rural Greece is experiencing a long decline, with many landowners preferring to live off subsidies than farm themselves, while the young leave for opportunities in the likes of Athens and Thessaloniki. With vast swathes of land going unused, Kastro hopes the Solidarity Fields can become a model for refugees to find their own place in Greece, as well as providing new energy to help resuscitate rural life across the country. He has deep roots in Greece; he wants to help others find a home here too.

After the Syrian people launched a peaceful uprising against Hafez’s son Bashar in 2011, Kastro joined a group from the diaspora who returned home to support displaced people inside the country. But when it became clear a bloody and protracted civil war was developing, they were forced to leave. Turkish officials ripped up Kastro’s passport, preventing him from returning to Greece legally. So he picked up a jet ski in Turkey and crossed himself. After seeing the increasing numbers who were escaping war and the awful treatment they faced during their journeys, Kastro went to Lesbos, where the majority of Syrians were reaching Europe in flimsy dinghies. Hundreds have died making this perilous crossing. 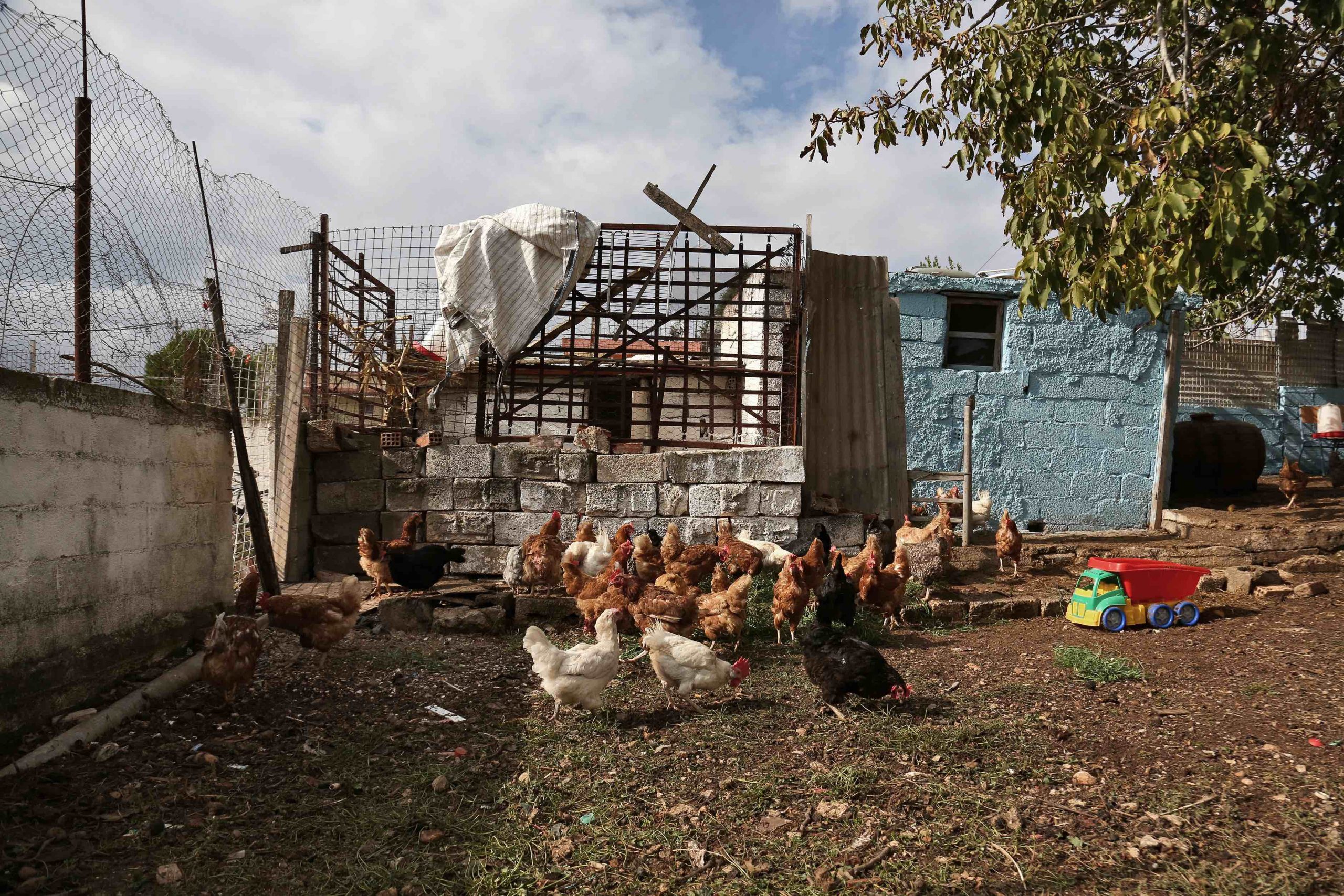 In Lesbos, Kastro helped occupy a disused government building in Mytilene, the island’s capital, which was turned into the Syria Solidarity House in December 2015. At the height of the so-called ‘European refugee crisis’, most displaced people were reaching Athens, staying for a few days, then continuing their journeys west along the Balkan route – mainly to Germany. In February 2016, however, Bulgaria and Macedonia closed their borders, stranding thousands of refugees in Greece. Previously, the estimated 850,000 people who had passed through the Greek capital would only have needed shelter for a few days. But now, with nowhere else to go, there was an urgent need for long-term accommodation. As more people arrived, the numbers sleeping in makeshift camps around the city were growing every day.

The deep scars of Greece’s economic crisis had left abandoned buildings all over Athens. Frustrated with what he saw as a sluggish response from the refugee solidarity network, Kastro helped open a squat in an abandoned school. “Once that was filled up, we opened another one, and then another one,” he remembers. They ended up opening seven in just under two years. “I know it’s not great for a family to stay living in an old school, but the camps are even worse,” Kastro continues. “We built proper kitchens at the squats and cooked together with everyone. In the camps, you queue up for hours for the terrible food they distribute. You take what you’re given – it’s dehumanising.”

The Solidarity Fields began shortly after with a small patch of land outside Plataea and became home to people from the network of squats. More and more families moved out of the city to live in peace on the farm and the project grew, renting more plots of land around the village. They planted wheat, potatoes, tomatoes, courgettes and tended to the vineyards and olive groves. Initially, the Arabic-speaking arrivals were met with suspicion from local Greeks. But after mediation by Kastro, the villagers began to appreciate the newcomers. Food produced on the farm was delivered back to the squats in the city and doctors who worked in the squats were brought out to attend to the villagers. 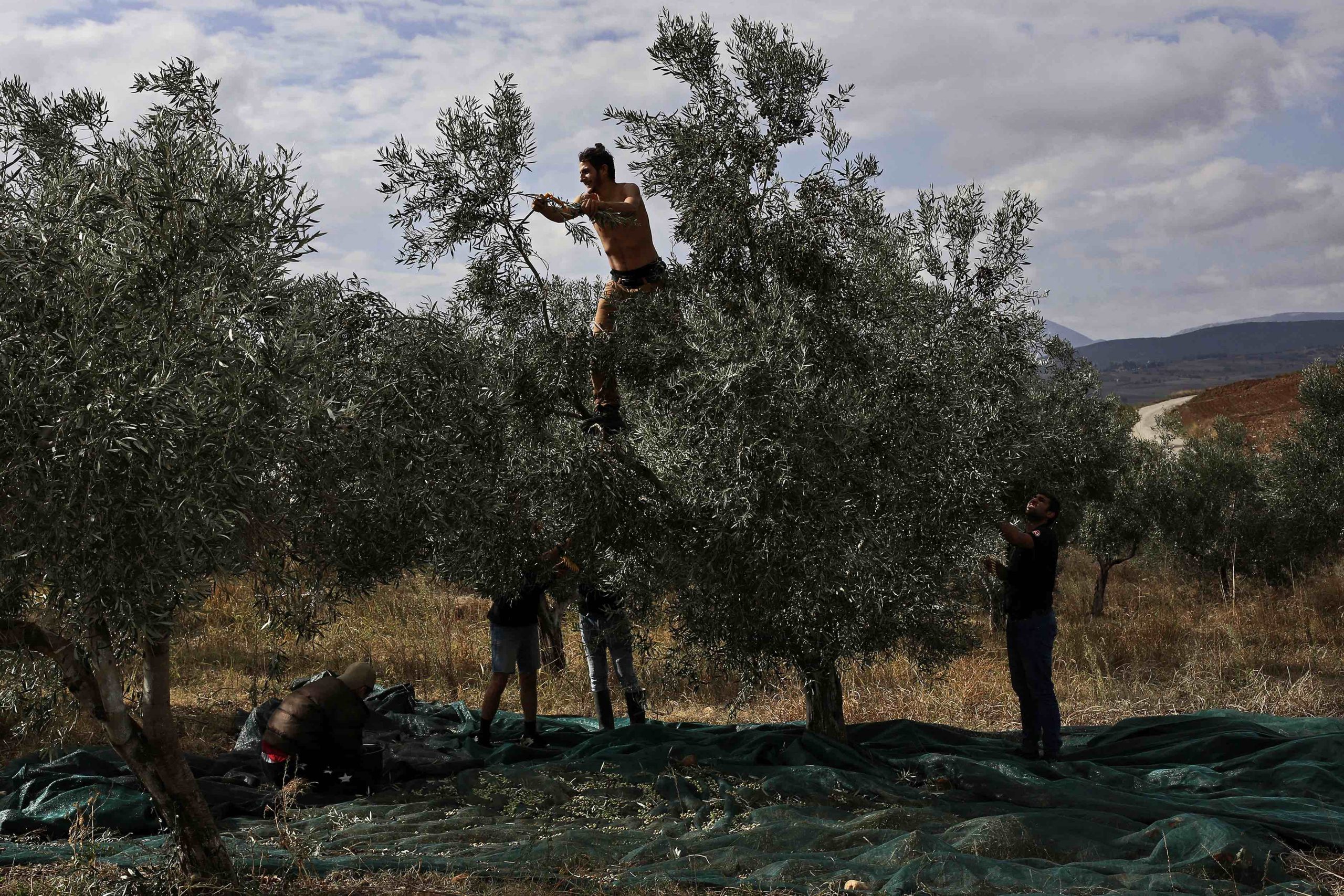 When the right-wing New Democracy (ND) took power in July 2019, the party moved quickly to implement a ‘law and order’ agenda. By the end of 2019, all of the squats Kastro helped run had been evacuated. ND abandoned the previous government’s de facto ‘live and let live’ policy – where grassroots projects like Kastro’s were allowed to continue operating, even if they weren’t strictly ‘legal’ – instead preferring to house refugees in closed detention centres or keep them out of the country altogether.

Wael Habbal began to farm with Kastro in 2020. He also came to Greece from Syria – specifically Darayya, a suburb of Damascus, which was one of the first areas to rise up and see heavy fighting. In Athens, Wael is a cultural mediator, activist and co-founder of The Syrian and Greek Youth Forum (SGYF), which collaborates with the Solidarity Fields in farming the land around Plataea. 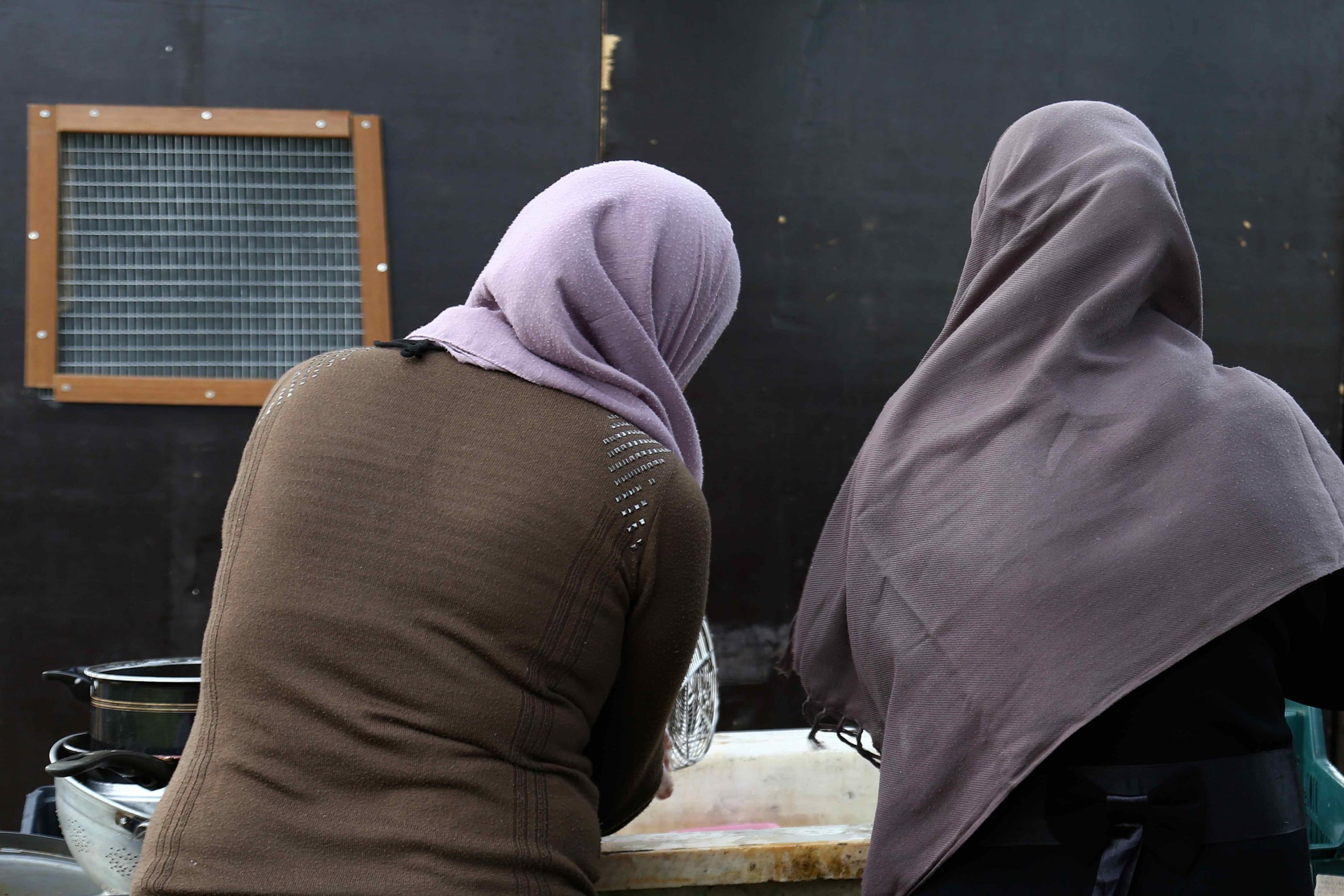 SGYF also cooks once a week at the nearby Khora Social Kitchen, an emergency food programme that delivers food to vulnerable people in Athens: at the height of lockdown, it was producing 1,500 meals a day. Given that the government has stripped many refugees of cash support and failed to meet the increasing need for help among Greeks citizens, Wael has found himself playing an active role in supplying the community with food.

“When I left Syria, my family lost everything, so there was no one to support me,” he remembers. “I always worked but I got hungry so many times. In Lebanon, Turkey and Greece, I slept on the streets and spent many days without any food. Being hungry is such a strange, powerful feeling: your view of people and the society around you changes. You see life in such a narrow way because all you are focused on is how to get your next meal. I don’t want to be hungry again. I don’t want anyone to be hungry. Learning that I could grow my own food created a huge connection between me and the [Solidarity Fields]. It’s a source of refreshment that brings me closer to the earth and reminds me of our roots as humans.”

The political situation in Greece feels volatile and ever-changing. But on the farm, surrounded by nature, mountains and ancient ruins, there’s a feeling of timelessness and peace. Right now, Kastro, Wael and the others are getting ready to sow their summer crops, as generations of farmers have done here for millennia before them. In turn, they will be rewarded with a harvest that will sustain their community. “A major thing refugees have lost is their dignity,” Kastro says. “The way the government and other organisations treat them denies them this. In the Solidarity Fields, people eat, work and live with dignity. They don’t rely on any person, state or organisation.” 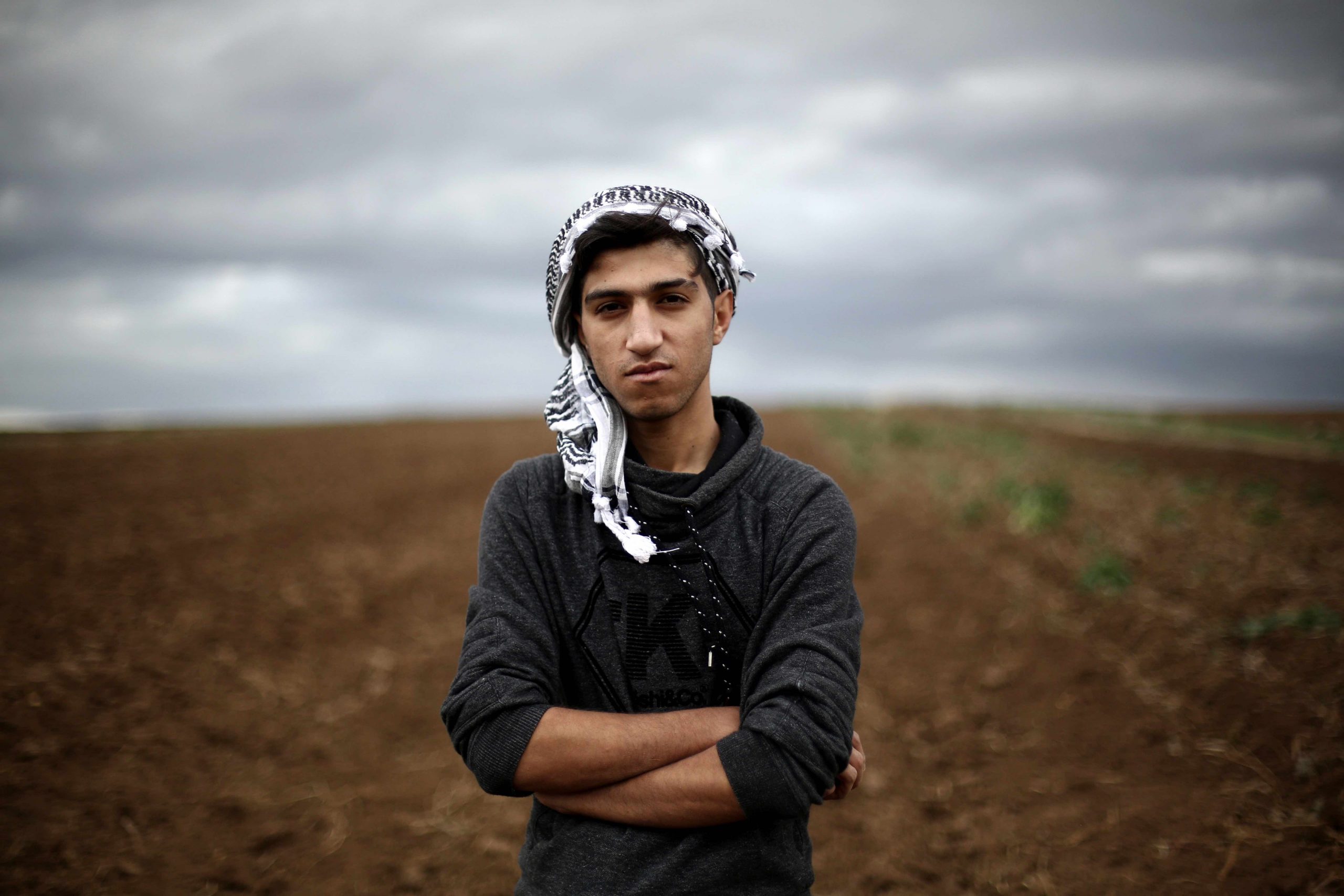 Linkedin
RELATED ARTICLES
OTHER ARTICLES
A new podcast is opening up the conversation between trans women and trans amorous men in the hope of building coalitions.
Theo McInnes’s photos of the annual event provide an intriguing snapshot of contemporary Britain.
Photographer Becky Tyrell went down to the fading banger and stock raceway to meet a community desperate to keep it alive.
Since 2007, Gideon Mendel has made 20 trips to document floods in 13 countries. The result is an alarming record of what has already been lost to the climate emergency.
As she gears up for the release of her first book, the 24-year-old climate activist talks standing up to authority and building a more inclusive movement.
At his West Bank restaurant, Fadi Kattan established himself as the voice of modern Palestinian cuisine. Now, he’s bringing his innovative, bold flavours to the UK’s capital.