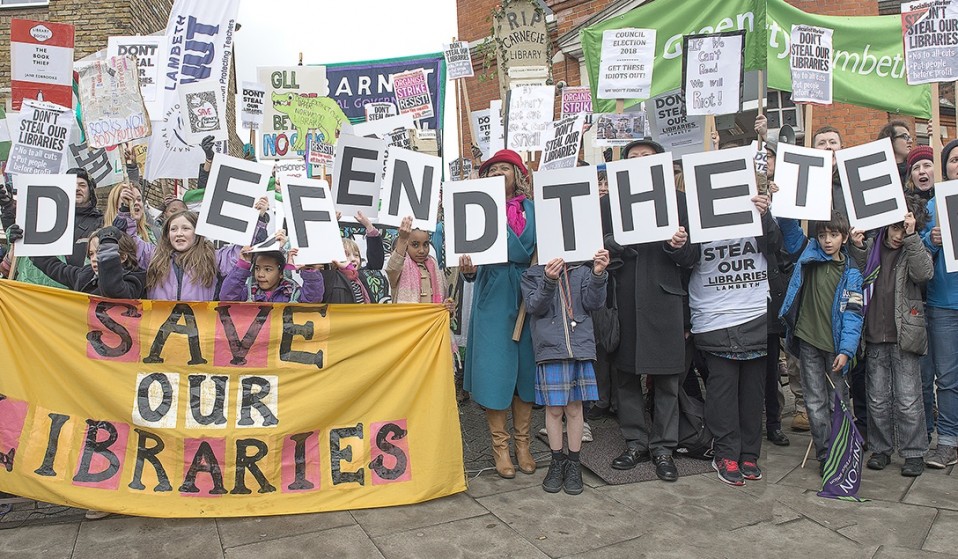 Standing up to fight for London's libraries.

When a London council announced plans to shut down local libraries, residents decided they weren't going to take it. Since Friday hundreds of people have got involved in occupying one library until Lambeth Council changes its mind. Alice Ashton went down to find out more.

The Carnegie Library sits in the centre of a long, steeply inclined road that stretches up from the historically feisty Loughborough Junction into the more genteel heights of North Dulwich in south London. Perhaps it’s the geography of the fault lines that’s made this grade 2 listed building the unlikely site of mobilisation for the diverse but increasingly disgruntled population of Lambeth.

In response to millions of pounds worth of cuts to local authority budgets, the council in this Labour safe seat have pushed through plans (albeit ones that don’t incorporate detailed financial and physical technicalities of the proposed process) to convert two of its libraries into “Healthy Living Centres”, and drastically reduce the services of three others. Despite my best efforts, I am yet to find any working definition for what a “healthy living centre” actually is. A spokesperson for Lambeth Council told me the plans are “still being developed”, while Councillors are tweeting pictures of cats to residents with genuine concerns.

It’s no great surprise that plenty of locals aren’t 100% convinced their libraries are going to weather the storms of austerity, despite the tepid excuses coming from local officials.

The library was due to close its doors for the final time on Thursday at 6pm, the sun drenched reading garden filled with children. A candlelit vigil had been called for the final moments, food provided and drink was flowing. Micki, an local woman, announced to the crowd that plans had been made, for those who wanted to, to stay in the library indefinitely until Lambeth Council changed their minds. Speeches followed, and then the occupation began. Over 100 people spent the evening there, with the majority spending the night. 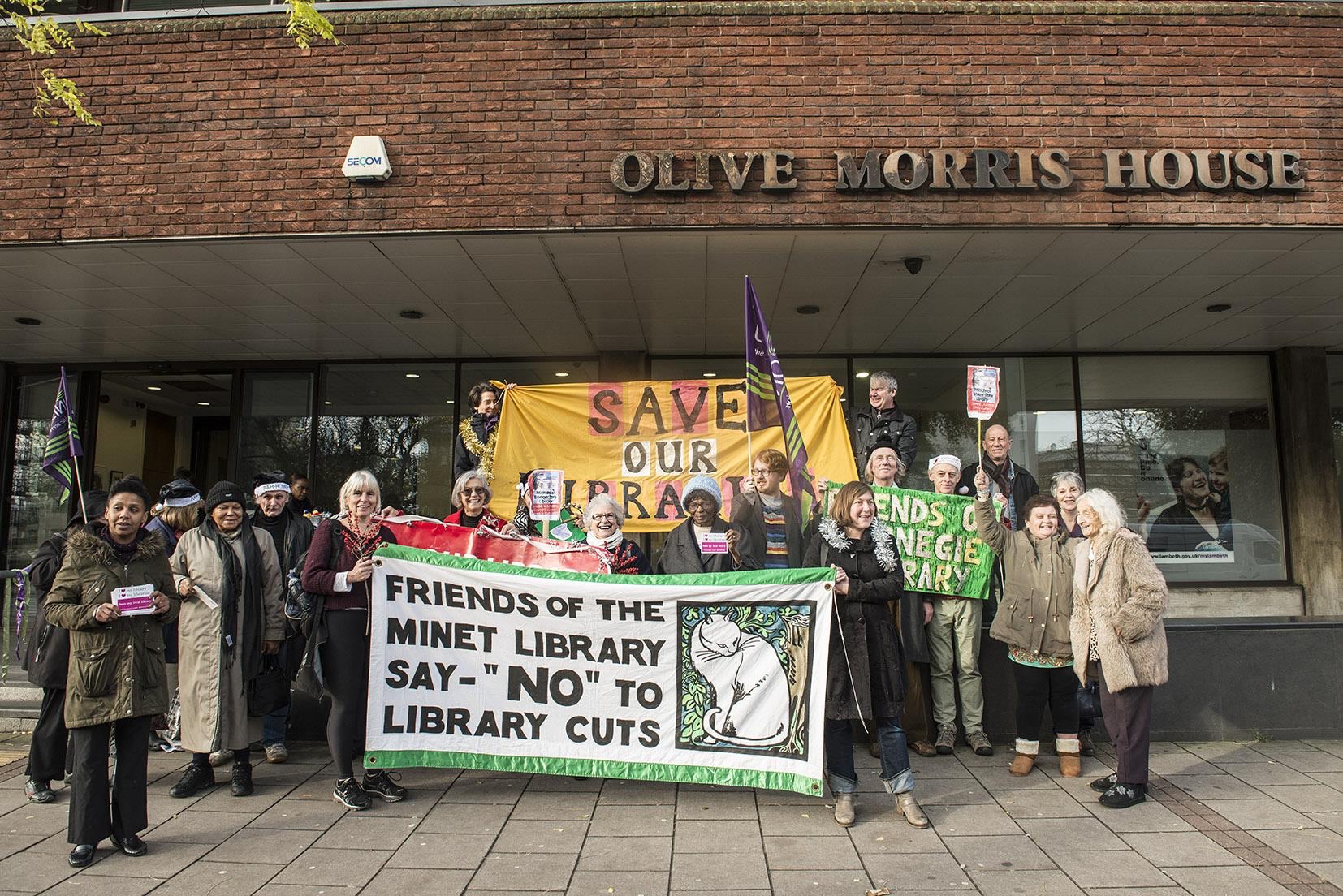 For the following 24 hours people came and went as they pleased, restaurants donated food, people of all generations pulled together to talk, organise and celebrate.

By Friday afternoon the number of security guards was increasing, and some police officers rocked up to try and make the protest dissipate. Police numbers have increased, refusing access for people to join in the occupation. Word is a court injunction will be served shortly to kick the protestors out.

One angry and unconvinced constituent is Theresa Mailroth, a mother of two who started using the library during a bout of postnatal depression following the birth of her second child. “It was a safe place to come to and be supported, and to spend time with other parents and children in a friendly environment”, she says.

In an affront to these campaigners, Lambeth Council have said that keeping its libraries as they are would mean cutting essential services for its most vulnerable constituents. Those occupying the library, and their supporters, say the libraries are just that.

“It’s a lifeline for so many people”, says Jeffery Doone, chair of the Friends of Carnegie Library Association. “The most vulnerable people use the library, this is where they come, and this is their refuge. I see people with mental health issues, I see people who are lonely, depressed, isolated, they come here, and they feel welcome.”

“There are people who are learning to read here, adults who never properly learned to read…they’ve been reading here for 41 years, Ruskin Readers adult literacy training,” he continued. Vital services like this have an uncertain future if the library is forced to shut its doors.

I guess the bloke in charge of the Friends of Carnegie Library group would have to say that, right? But it’s true. I, someone who is much too shallow and unprincipled to take a stance on almost anything, have had timely attestation to the power of the library. I’ve recently tried on more than one occasion to access Carnegie library, but I’ve unfortunately always been caught out by its dramatically diminished opening hours (it had the lowest amount in the borough).

A Spokesperson for the council told me that protestors are “misleading residents and the public”, and that “it is unfortunate that a small number of people have decided to be obstructive, especially as Lambeth Council has worked incredibly hard to minimise the impact of the cuts on Lambeth libraries.” Residents aren’t convinced. 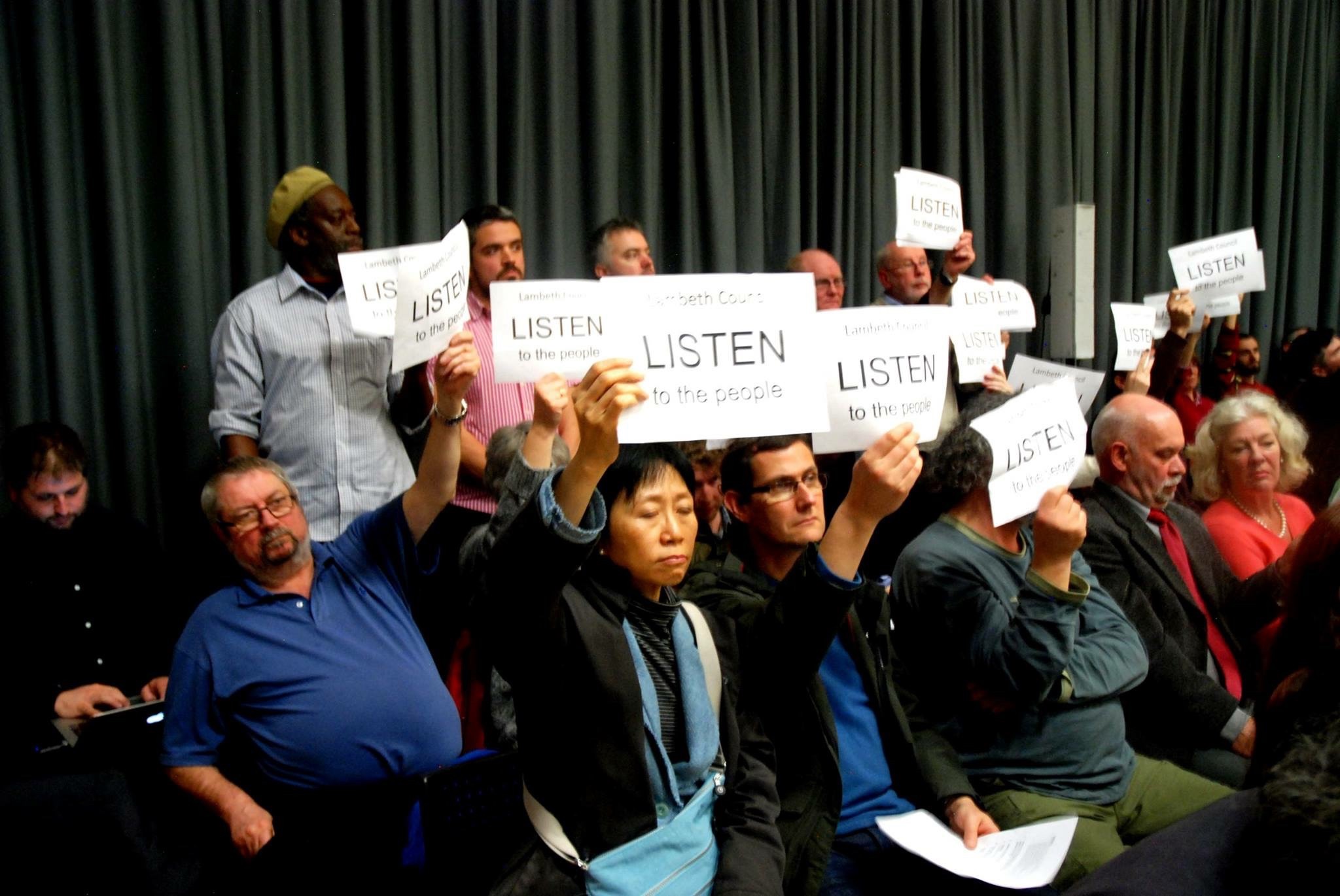 But it so happened that on the day before Carnegie library’s closure, my computer stopped working, struck down by a virus. Thankfully I still just about had a local library to save me from a day of otherwise inevitable daytime TV. I found myself surrounded by people from all backgrounds, using the library to read, to meet, to study and to talk.

A few days later and I am standing outside the occupied library when someone stops to show their support. They’ve never really used the library, but they did work for GLL, the company due to take the building over and host the Healthy Living Center.

“They treat their workers like crap”, he says to me. “They reduce your hours at the drop of a hat and don’t pay you on time…they exploit people.”

That’s when I realise that protecting libraries isn’t about the merits of gyms v books, or body v mind – but about keeping the fabric of our community together. Those people occupying the library are fighting for a vital shared resource, a place for civic good, a sanctuary for those with mental illness, and in support of librarians whose jobs are on the brink. That’s the power of our libraries, and it’s a place to get free books too.

Linkedin
RELATED ARTICLES
OTHER ARTICLES
Last week, Tower Hamlets council removed its nudity-restricting licensing conditions in a huge win for London’s kink community.
The government’s brutal crackdown on NGOs has left victims of rape without anywhere to seek help. And now, as the country plays a key role is Russia’s war, things are only getting worse.
Students are being left to languish in unsafe housing, in some cases leading to serious health complications.
With the virus now a global health emergency, we must take steps to fight misinformation and demand a swift UK-wide vaccine roll out, writes Phil Samba.
The author discusses her new memoir, which offers a sobering reflection on the racism and otherness she’s experienced along with a joyful celebration of her culinary heritage.
A sharp increase in officers armed with the electrical weapon is resulting in serious injuries and deaths.