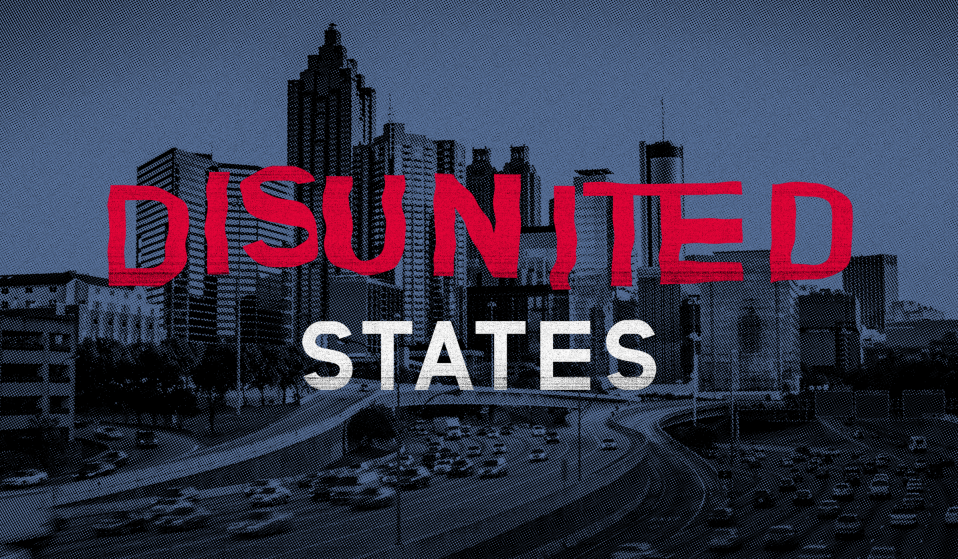 With Donald Trump heading to the White House, Huck sets up camp in Georgia, to hear stories from voices on the ground and make sense of America's future.

When news broke that Donald Trump would really be taking up office in the White House, we sat shocked, angry and bemused at what to do. Now Huck’s News Editor Michael Segalov is heading Stateside to Georgia to hear stories from voices on the ground. In his first dispatch from the US, he explains where we’re going, who we'll be talking to, and how we'll be trying to make sense of America's future.

A word of warning: I haven’t really slept. I’m not entirely sure what time it is; what time zone I’m in; if I should be eating breakfast or going to bed. And before you say anything, I’m painfully sober.

When I jumped on my flight to the United States yesterday afternoon, I think part of me was desperate to cross the pond just in case this whole election was a practical joke being played on the rest of us, which had got a little bit out of hand.

I hoped I’d touch down in New York City to be greeted by hoards of Americans drinking and dancing, mocking me and my cute British accent. “Ha, you really thought we’d vote for Trump as President”, they’d cackle. “That’d be as ridiculous as a vote to leave the EU, oh wait you did that!”, one would laugh. Someone would pass me a beer, I’d head to the Big Apple for a night on the town. The joke would be on me.

I won’t pretend it wasn’t wishful thinking, but I suppose I needed to see it to believe it, with my own weary eyes.

Then I get off the plane. A Latino maintenance woman stands by the exit as I take my first step on to American soil, her pained expression plain for all to see. At passport control a family of six sat on the floor, a baby crying: they’d landed from Iraq, I overhear a security guard explain. A Muslim man in front of me gets pulled in for questioning.

As I wait for my bags, I hear two young black women behind me muttering in disbelief. The fading American flag hanging above us sways in the air con-induced wind. It was probably like this yesterday too, I tell myself, but it’s little comfort, this is definitely real.

So, now I’m sat in a brightly-lit departure lounge, the TV screens above me beaming down live pictures of protests kicking off in Manhattan, just a few miles away. It’s happening all over. The Mexican-born server who chucks me my over-priced beer keeps looking up, “it’s just not set in yet”, he sighs.

America has spoken, and to be honest, I really don’t like what I can hear. Except I know that deep down I’ve not been listening. In a similar vein to Brexit, despite reading, watching and writing politics for a living, it seems I’d once again buried my head in some progressive, compassionate sand.

I think that it’s understandable: sure, an element of naivety, but also an explainable unwillingness to avoid facing up to the facts. I know that one day (as time goes by, I imagine it’ll be increasingly soon) I’ll die – it’s an inevitability – yet I still don’t like to think about it day to day.

So, now I’m stateside, and I’m going to try and find out why. How did it come to this? What on earth do we do now?

I’m en route to Atlanta, Georgia. It’s a place I settled on for a whole load of reasons. Georgia wasn’t necessarily a battleground swing state, but it was certainly one that people were watching. Speaking to pollsters, it seemed apparent that for Clinton to succeed in her path to the White House she’d need to be clawing ground here. A traditionally Republican heartland (they’ve won here for the last two decades), there was a time when Clinton looked set to nab these electoral colleges. She failed.

Atlanta itself a buzzing, multi-cultural Democrat metropolis surrounded by a sea of Trump supporting red. It played an important part in the Civil War (here’s hoping it won’t soon be known as Civil War I), as well as the Civil Rights Movement of the 1950s and ’60s. It’s here that Dr Martin Luther King Jr was born, and some of his contemporaries remain in the city to this day. The majority of people in Atlanta are black, it’s a city that by all accounts did not vote for Trump as their President.

So here I am, nearly 24-hours later, sat with a beer in Newark Airport, NYC, watching the end of the world on TV. My flight to ATL takes off shortly.

In the coming days I’ll be asking people from all walks of life one simple question: what next? I’ll be hitting up the gay bars to see how LGBTQ people are faring, speaking to young women about how they move forward under the premiership of the ‘pussy grabbing’ Trump. Young Muslims, black people, skaters, community leaders and teens. I want to know what they’re feeling, planning, thinking. I’ll be in the city, but searching for stories in the Republican leaning sticks, too.

There are also questions to be asked about the future of this very democracy. Why, was turnout so goddamn low, especially amongst traditional Democrats? Clinton actually secured the most votes in the popular ballot despite not winning the election; the 18th-century Electoral College system is what gave Trump his prize, is it time for it to go? Did the Democratic establishment hand Trump his presidency on a plate by not backing Bernie?

I’ll be honest, this Brit abroad for a handful of days isn’t likely to answer them all. No doubt in the months before Trump takes his place in the White House (shit, I still can’t quite believe I’m writing this), there’ll be ample time for introspection and soul-searching in the months to come. Right now I want to start listening, to those who are petrified of the future, those stepping into the unknown, those who thought that their nation was truly something better.  And yes, those who feel vindicated by the shocking results.

Linkedin
RELATED ARTICLES
OTHER ARTICLES
A new podcast is opening up the conversation between trans women and trans amorous men in the hope of building coalitions.
At his West Bank restaurant, Fadi Kattan established himself as the voice of modern Palestinian cuisine. Now, he’s bringing his innovative, bold flavours to the UK’s capital.
The action took place in response to the 200 asylum-seeking children who were placed in hotels run by the Home Office who have gone missing.
AI companies that develop image-generators using copyrighted artwork from the internet are coming under fire from artists who say that it amounts to theft.
Since 2007, Gideon Mendel has made 20 trips to document floods in 13 countries. The result is an alarming record of what has already been lost to the climate emergency.
Filmmaker Laura Poitras discusses her new documentary which traces the remarkable life of the artist-activist and the impact of her battle against the US opioid crisis.