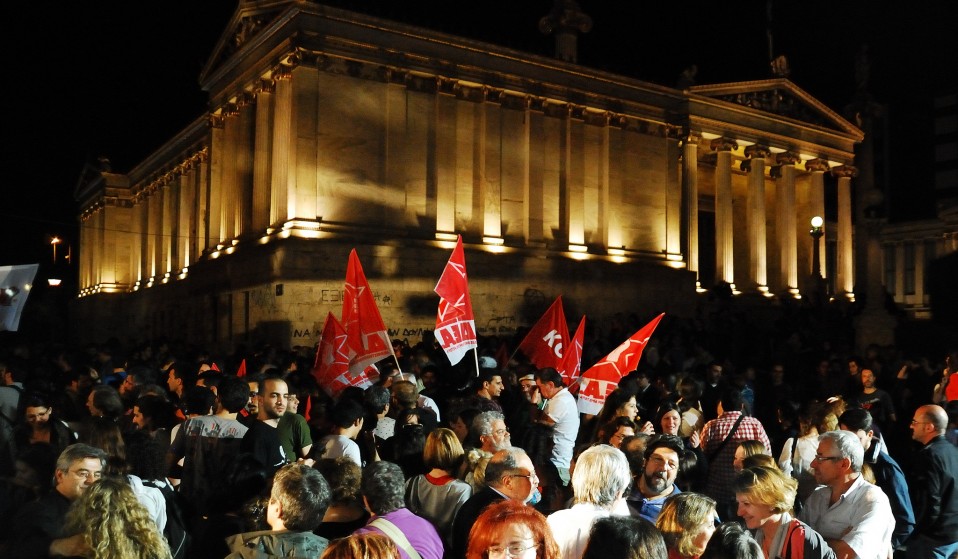 Austerity has been a disaster for young Europeans but the blow has fallen hardest in Greece, where youth unemployment has reached 60%. Since the crisis broke in 2008, the economy has shrunk by 25% and more than 200,000— mainly young people — have left for other European countries due to the lack of opportunities – the biggest brain drain in an advanced western economy in modern times.

Left-wing party Syriza swept to victory in Sunday’s elections on a promise of challenging the austerity imposed on Greece by the EU and IMF. But what does their victory mean for young Greeks, many of whom have already left the country? To find out, we spoke to Despina Koutentaki, 25 —one of the young economic exiles, who now lives in Annecy, France after leaving Greece in 2012.

“Falling salaries affected all types of people: parents, kids, single and married,” she says. “As a single young person, it’s cruel to feel that I have no future in my own country, yet still feel proud to be Greek at the same time.”

Despina studied architecture and business, but she realised there was little hope of securing a job in Greece. She chose to study abroad to increase her chances of finding work elsewhere and arrived in London in 2012, supporting her studies by waitressing and flipping burgers at McDonald’s. She moved to France in 2014 and is now taking online business courses.

“The reality is that only a very small percentage of the young people who are leaving Greece really want to live permanently in another country,” she says. “Only the lack of career or educational opportunities could force them to take such a decision and move to another country where their studies would be appreciated and they could have hope for the future.”

Syriza’s win has ousted the conservative New Democracy party, who along with PASOK have been the only two parties to rule Greece since the end of military dictatorship in 1974. Syriza’s victory puts the country on a collision course with the EU.

Despina hopes to be able to return home and is convinced that abandoning austerity is the right move for Greece, but is cautious about Syriza’s chances of success. “If things get better in Greece, I think most of the young people will return,” she explains. “I believe that anti-austerity will improve the situation. I’m just not sure if I believe that Syriza will make the difference. Hopes are high but people are always in a state of disbelief.”

Linkedin
RELATED ARTICLES
OTHER ARTICLES
Jermain Cikic reflects on his experience of visiting the island of Samos, Greece, in the summer of 2021.
In 1984, Martin Shakeshaft set out to document the miner’s strike as it really happened, using his photography as a tool for activism.
With abuse of call-centre staff on the rise, many are now speaking out about the hostility they’ve faced.
While the Colston 4 verdict is worth celebrating, it‘s debatable whether the law would’ve had such empathy for Black people in the same position.
From the queues outside to the last ones standing, Francesco Mellina’s new photo book follows a night that has gone down in the Northern-Soul history books.
In the UK, Hongkongers are continuing to stand in solidarity with the pro-democracy movement.