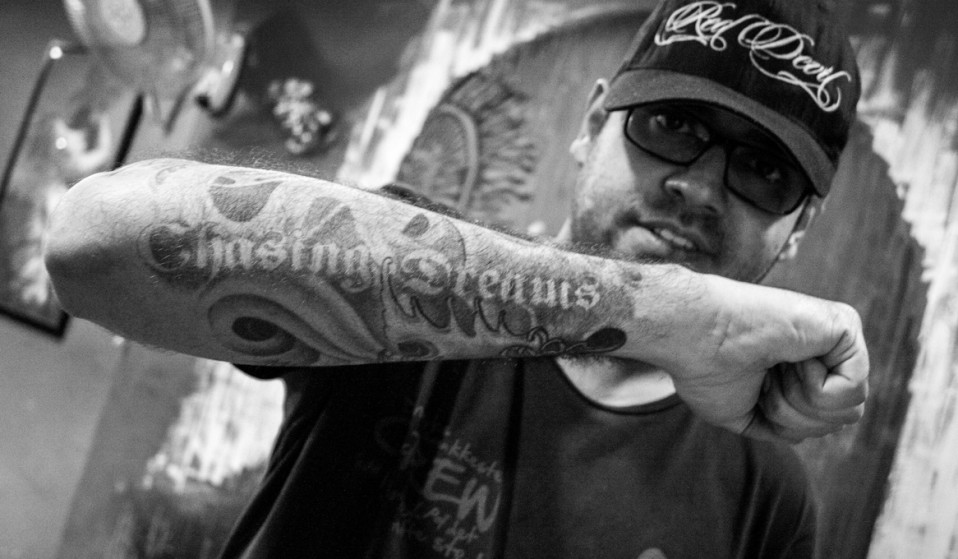 Behind a black tinted glass door in a busy market square in Greater Kailash, South Delhi, sits an unassuming shop called Devilz Tattooz. Inside you’re welcomed by an air-conditioned chill, and a deeper sense of cool that permeates the place. Two giant wall murals depict the faces of tattoo legends Paul Booth and Bob Tyrell. Despite creative bric-a-brac – dreamcatchers, wooden ornaments and Buddha statues – this clean and clinical tattoo parlour is rated among the best in India, frequented by the young and rebellious.

Body art in India is neither foreign nor new. But while temporary henna tattoos are seen as a female birthright, permanent ink is still stigmatised in a society that values conformity over individual freedom.

But at Devilz, things are changing. Founded by Lokesh Verma, a self-taught tattooist from a conservative Hindu upbringing (parents who pray twice a day every day and a Masters in Business), this unorthodox, thriving business is shaking things up. “I wanted to do something different so I got my first tattoo,” says Lokesh. “I got hooked and then wanted to do it myself. Someone from the States was coming over, so I got the kit imported and started on myself and my friends as a hobby. I never thought it would be a profession.” In 2005, Lokesh opened his first tattoo space inside a friend’s salon in then-trendy Vasant Vihar (a rich neighbourhood in South West Delhi). Studios in West Delhi’s Rajouri Garden, on the outskirts of the city in Gurgaon, and here in GK soon followed. “When I started, I hardly did any tattoos. Maybe fifteen a month,” says Lokesh. “Now we have nine artists in three practices and we do around 400 tattoos a month. It’s a very reliable career and it has taken me places.” In the last two years he’s been to Europe and the US five times, guest-tattooing in Sweden, Denmark, Germany and France.

Experiencing freedom of expression in foreign lands left a permanent mark on Lokesh, who is trying to connect new-world attitudes with old-world values. “My mother’s father had a big Lord Hanuman tattoo on his thigh. He got it from a local mela [village fair] where they would do godna [burning skin with a needle]. No one knew what sterilisation was, I’m talking about the 1940s. And in the north east state, Nagaland, they have the whole head-hunters tribal ritual. When they kill a person they get a tattoo done.”

Technique and style may have come a long way since his grandfather’s day, but most of Lokesh’s clients still err towards tradition. “People in India don’t go for new-school designs. There are just two kinds of tattoos that go down very well here – either religious things or something related to family, like names or portraits.” There’s no doubt that India’s tattoo culture is booming – a survey taken by mydala.com in 2013 showed a 100 per cent rise across a broad age range – but according to Lokesh, the change is superficial. “It’s changing just because of TV shows like Miami Ink,” says Lokesh. “They think it’s in fashion. Before, tattooing used to be a very underground society. Not everyone had the courage to walk into a tattoo shop, but now people can see it on TV.”

Where gunpowder grafts of sacred gods were once inscribed in the name of devotion, copycat A-List tattoos – like Bollywood actress Priyanka Chopra’s ‘Daddy’s Little Girl’ – are repeatedly plagiarised on impressionable flesh. It’s not the show of individualism Lokesh was hoping for. Feeling like the bird has flown the nest and crash landed, he’s exasperated by the hollowness of this revolution. “Boys will even come to get ‘Mama’s Little Boy’. Can you believe that? It’s so stupid,” says Lokesh. “I try to tell them to be more original, but then they’ll get ‘Rahul’s Little Angel’ instead! I always try to encourage them to think [and challenge things], not just about tattoos but other things like religion.” He explains: “If you are born in jail, you will grow up and find the walls very normal. So if you have been brought up to pray and do the rituals of your religion, you will think it’s normal. It’s the family who have to let the child develop its own lifestyle and beliefs.”

As a home to ancient faiths – Islam, Buddhism, Jainism and of course Hinduism which dates back as far as 7000BC, and numerous younger denominations – religion plays a central role in India, influencing everything from community and family life to business transactions and judicial practices. Often shrouded in rituals and mythology, superstition tends to play a part, too.

“The other day two girls and a guy were getting tattooed on that station and there was a big calamity in India, you know the natural disaster where thousands of people died?” says Lokesh, referring to the cloudburst that flooded the northern state of Uttarkhand in June 2013, reportedly killing 5,700 people and trapping 100,000 pilgrims in holy sites located in valleys devastated by landslides. “Between them they were asking, ‘Why did this happen?’ The guy said they had removed Lord Shiva’s sculpture from somewhere, so this is his wrath, this is the way of revenge. And the girl was like ‘Yes, definitely, this is bound to happen!’”

His face visibly pained, Lokesh goes on: “So this is the younger generation!? You would think people who are getting tattooed would be more open-minded, but if they are thinking like this, then there is no hope. It’s like, ‘Screw logic, and screw science, and whatever ecological changes caused the calamity.’ And this is because they are just blindly taught by their parents.”

Though he doesn’t impress his views on others (“I try not to talk too much because I’ll have a conflict with the client”) Lokesh tries in stealth to promote free-thought in his young clientele. “They are not confident, this is one thing I see in India. Peer pressure and parental consent is very much important.”

Instead of taking to a soapbox, Lokesh tries to trigger change by doing what he loves. Alongside his hand-picked team, he has introduced safer, fresher, artisanal inking techniques to the trade; importing previously unseen designs and colours and seeing to it that women infiltrate the industry in an effort to bring delicate art forms like filigree to the books.

“I think [tattooing] has become accepted now, not in the small towns and villages, but at least in the cities,” says Lokesh, who boasts a portrait of his wife on his arm. “My clients tell me they see more and more tattoos on the streets. It’s becoming normal. There are definitely alternative cultures that are emerging and thriving in Delhi. Whatever is here, it’s growing.”

This article originally appeared in Huck 42 – The Mark Improv Issue. Buy it in the Huck Shop now or subscribe to make sure you never miss another issue.

Linkedin
RELATED ARTICLES
OTHER ARTICLES
London-based photographer Lola Paprocka focuses her lens on the often overlooked curiosities of city and suburban life.
London-based artist Elfin shares some of her inspirations after the opening of her solo exhibition at Circle Tattoo in Soho.
Body art is going avant-garde, thanks to a new generation of Berlin-based tattooists who see a canvas where others see skin.