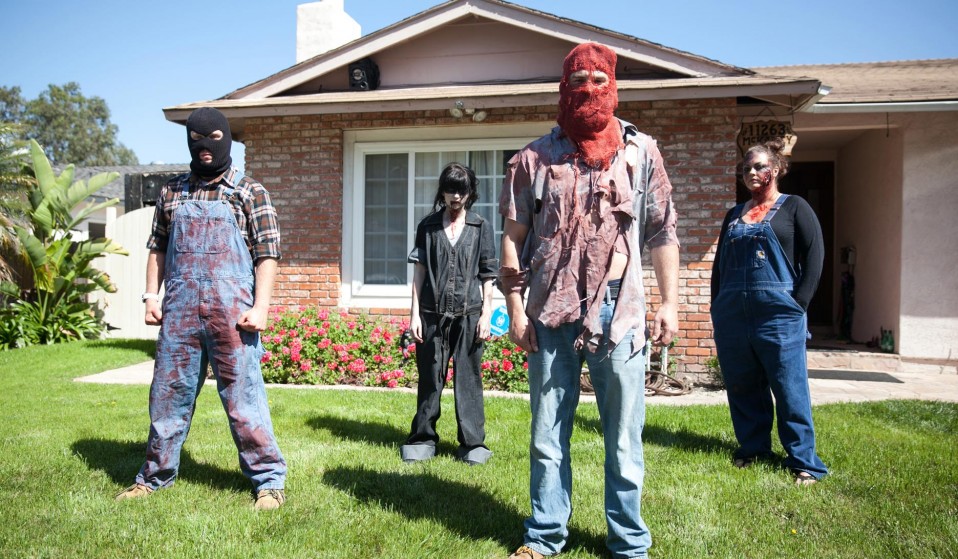 Russ McKamey turned his home into an ‘extreme haunted house’. Now producers want to turn his torture sessions into a hit TV show.

When Russ McKamey turned his home into an ‘extreme haunted house’, he never imagined his taste for terror as anything more than a labour of love. Now producers want to turn his eight-hour torture sessions into a hit TV show.

On a quiet street in Rancho Peñasquitos, a family-oriented suburb of northeast San Diego, one resident has converted his home into America’s most extreme haunted house. This is McKamey Manor: a hybrid adventure park and torture cell.

Since 1998, Russ McKamey has been mentally and physically driving participants to breaking point – all while filming their meltdowns and sharing the footage online.

“Compared to Guantanamo Bay, we’re a lot worse,” he says. “We don’t have months to break people down. We have five minutes.”

The experience begins when Russ and his crew of actors blindfold guests and throw them into a red, windowless Dodge Sprinter.

It’s known in the neighbourhood as ‘the kidnap van’ and has a license plate that reads ‘Djparty’. 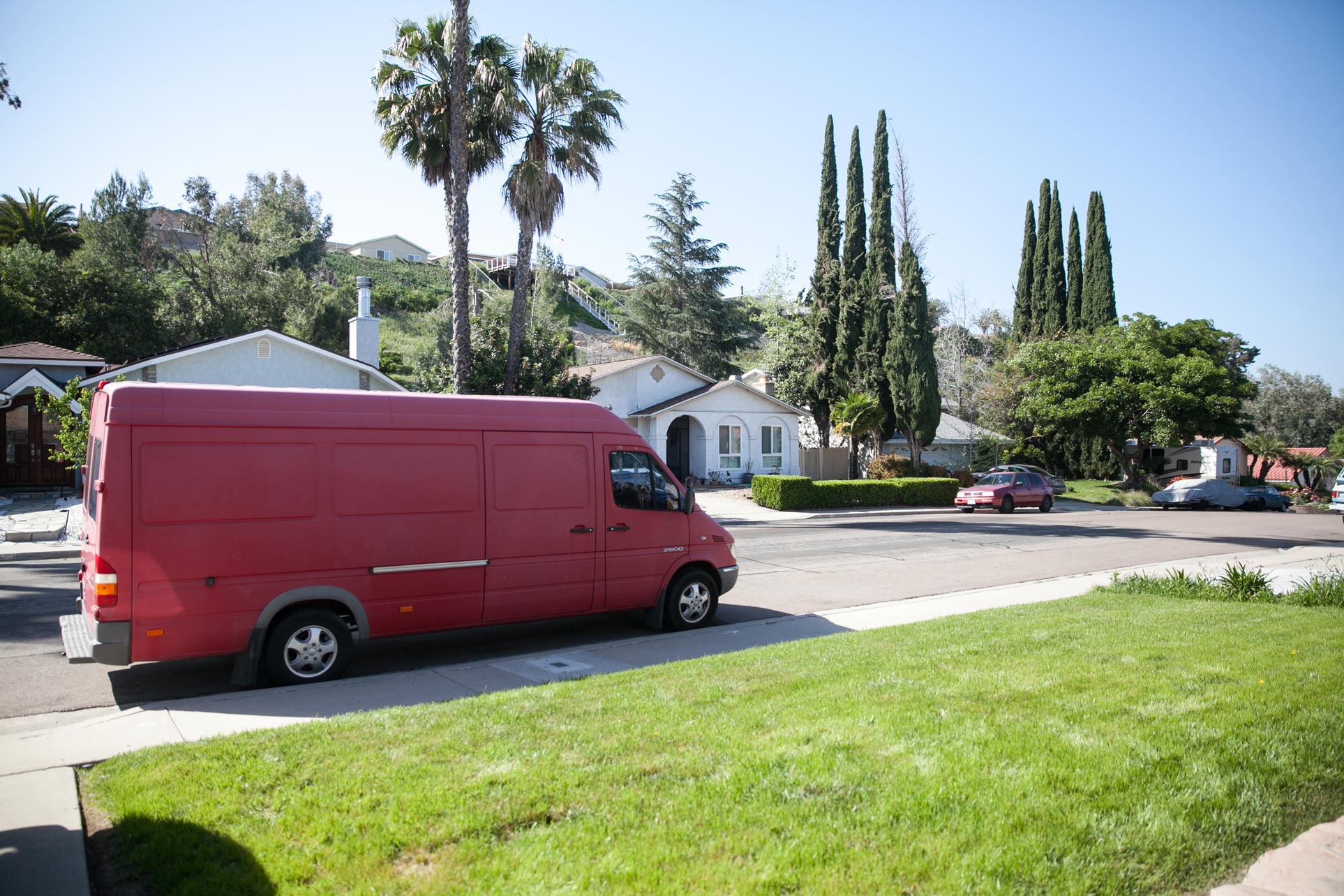 From that moment on, they can expect to be held hostage and forced to eat the likes of cockroaches or human hair, tied to a gurney as a spider crawls over their face, and have their heads dunked into a dirty toilet bowl.

Technically, there’s no safe word to make it stop but not one person has ever been able to get through the entire eight-hour experience.

And yet, not only are people willing to sign a liability waiver to take part, the manor’s cult-like following has led to a waiting list of thousands from all over the world.

In fact, its crew of masked kidnappers are mostly volunteers who were once guests themselves. 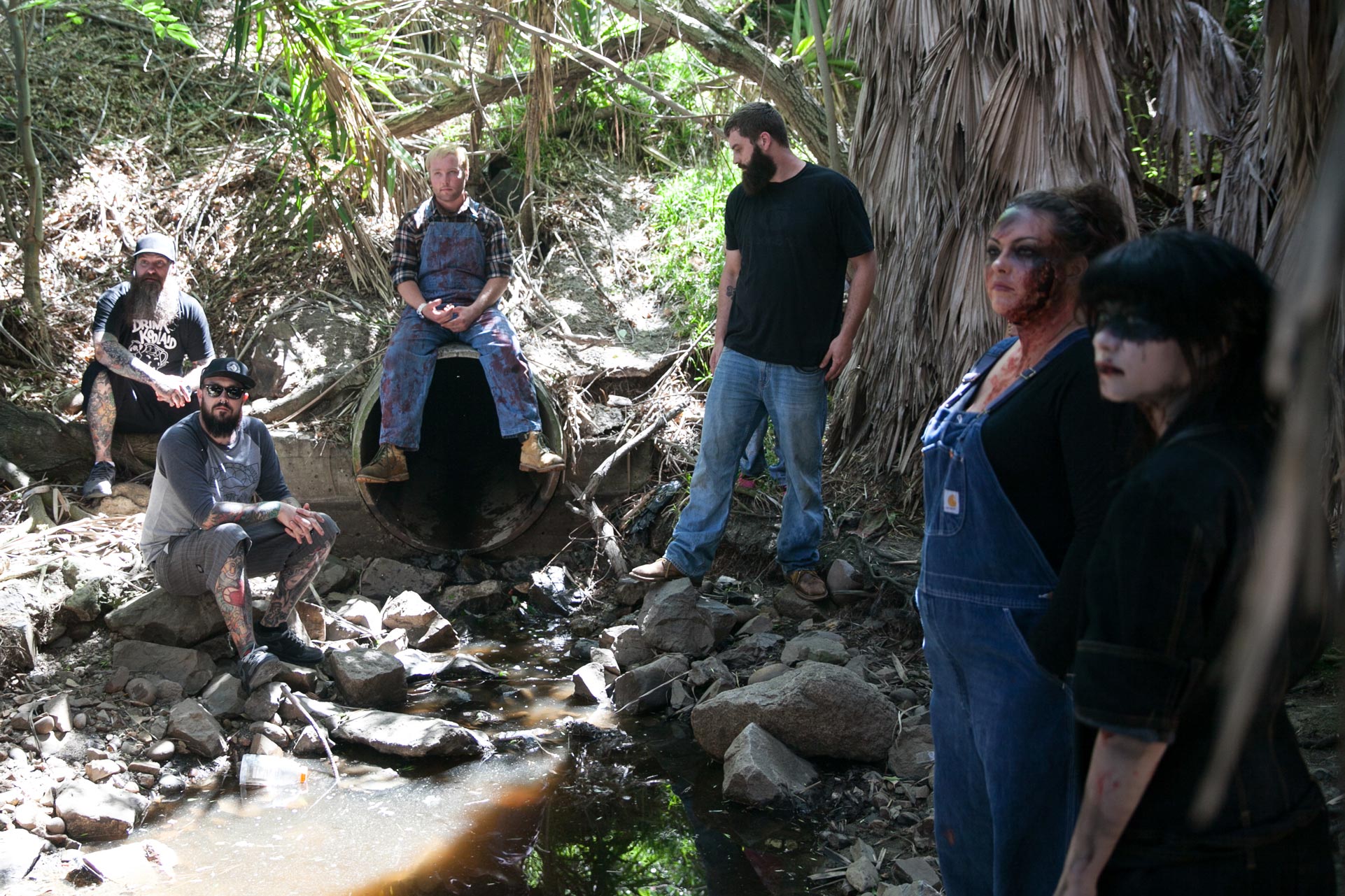 “I am McKamey Manor,” says Russ when we meet. “When I built the manor, I built it with the things that scare me in mind.”

In person, Russ’s towering stature and intimidating presence makes him seem like a cross between Biff Tannen from Back to the Future and Gunnery Sgt. Hartman in Full Metal Jacket. He’s loud but surprisingly friendly, grabbing my hand to greet me as if we’re old friends.

As the door to his home opens, seven dogs pounce forward to lick my hands, prompting Russ to joke that they were once a pack of twelve and that I should consider myself lucky.

In truth, he and his partner Carol Schultz are committed to rescuing greyhounds – so much so that they only accept payment in dog food. 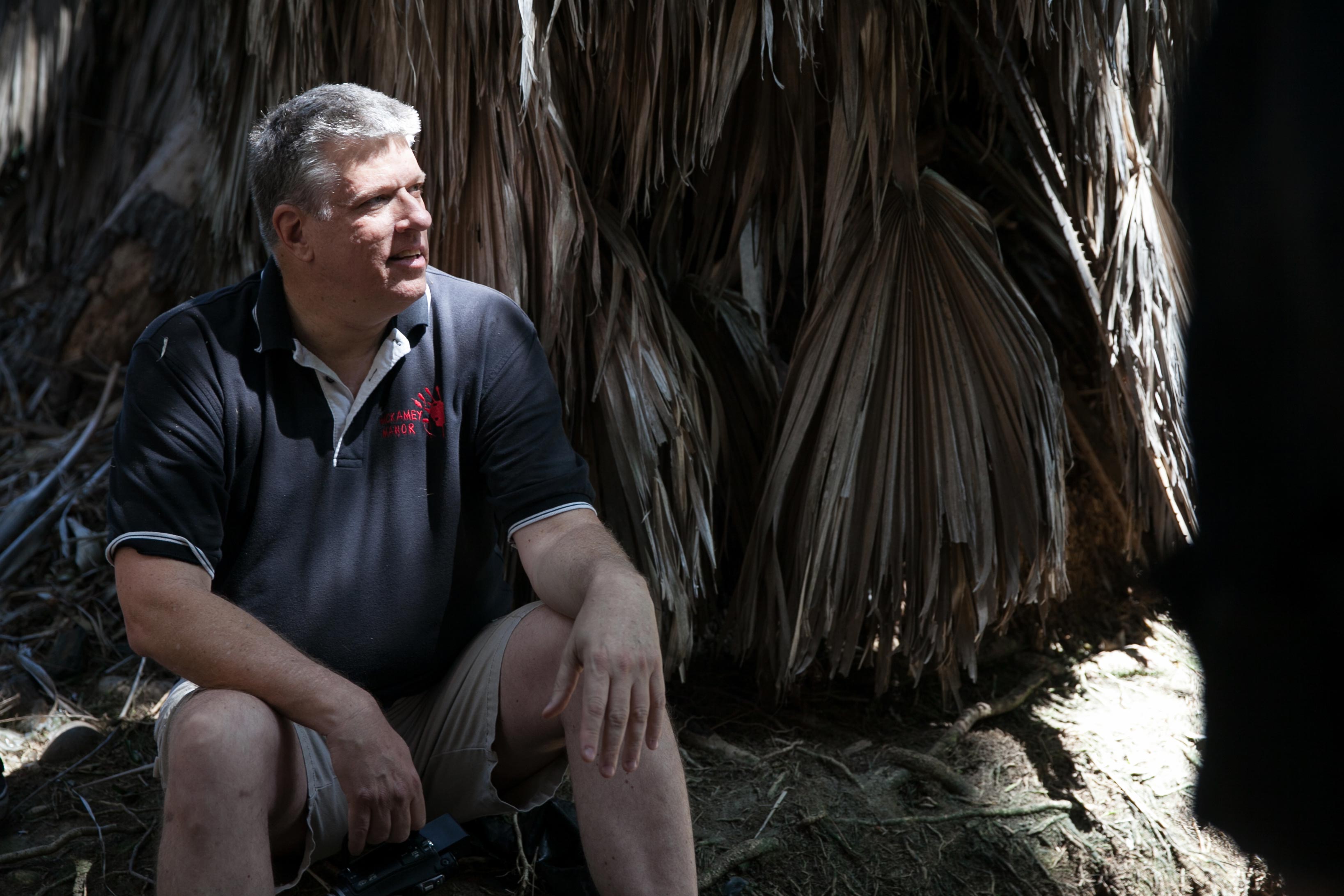 “He cares a lot about people,” says Beth Hipple, a former participant. That description might be hard to square with the merciless drill sergeant you see in the YouTube videos, but he insists that’s just a character. In real life, Russ considers himself straight edge: he doesn’t swear or smoke and promises he’s never been drunk.

After sliding open a glass door in his living room, escorting me beyond a black curtain, we enter what remains of McKamey Manor. Parts of it have already been disassembled and shipped to two new sites: one in Los Angeles and one in Scottsdale, Arizona, where he’ll charge participants for the first time.

In the backyard, Russ hops in a wooden chair and closes a cage over his head – a setup instantly recognisable from videos where he blasts participants with water and dumps snakes into the cage. Behind him lies an array of animatronic zombies, Medieval torture devices and other painful-looking contraptions that Russ invented himself. 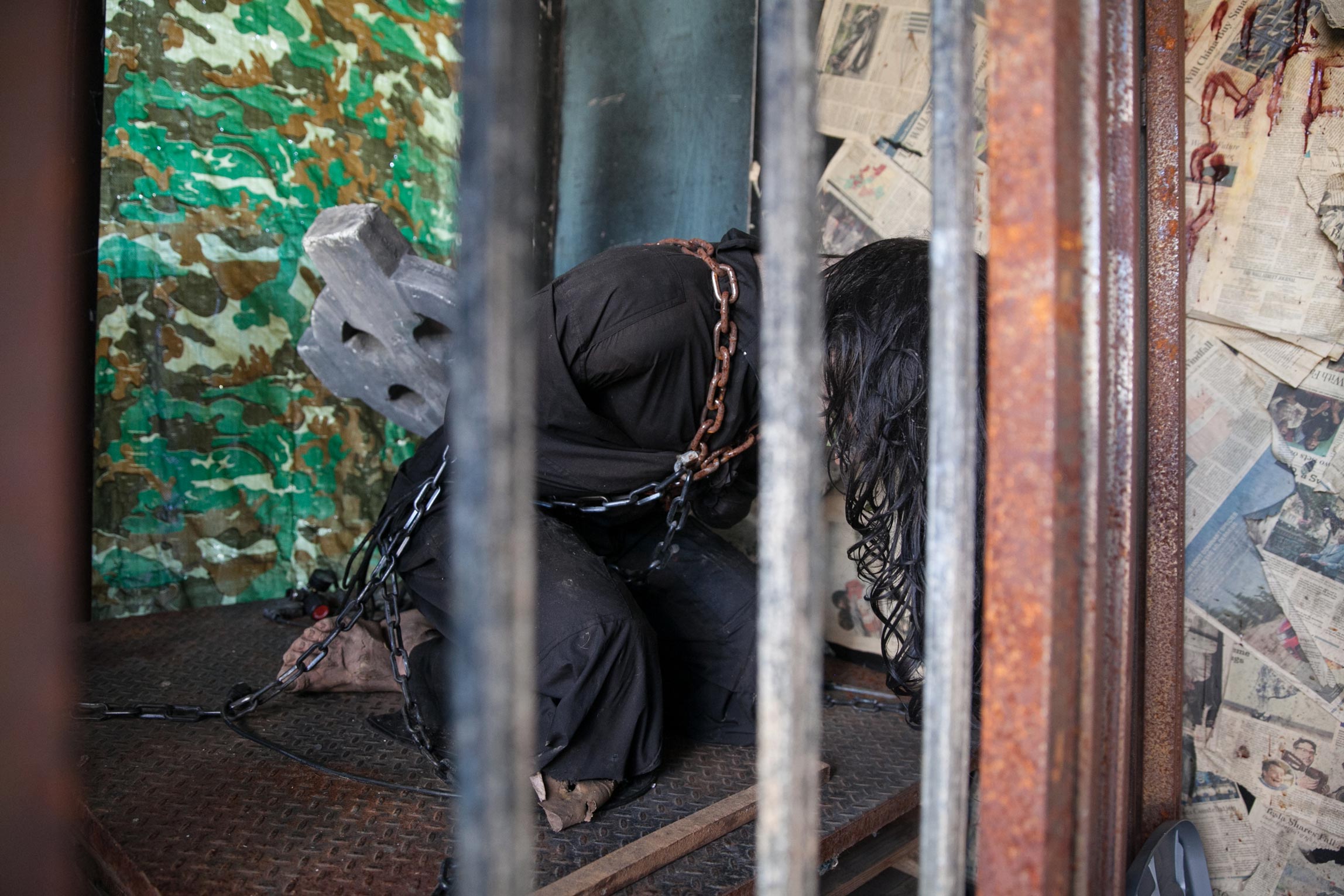 Viewed in the California sunshine, however, it all looks like a harmless theatre set.

“It’s like putting on a big play,” says Russ, his jagged teeth sticking out of a smile. “It’s showbiz! I’m a showbiz kind of guy.”

Russ sees himself more as an entertainer and filmmaker than the owner of an interactive haunted house. He always thinks about the experience from a director’s perspective, factoring in things like lighting, camera angles and emotional resonance.

He enjoys editing countless hours of footage, imagining himself as a contemporary William Castle – the B-movie horror producer behind films like like 13 Ghosts, House on Haunted Hill and Rosemary’s Baby. 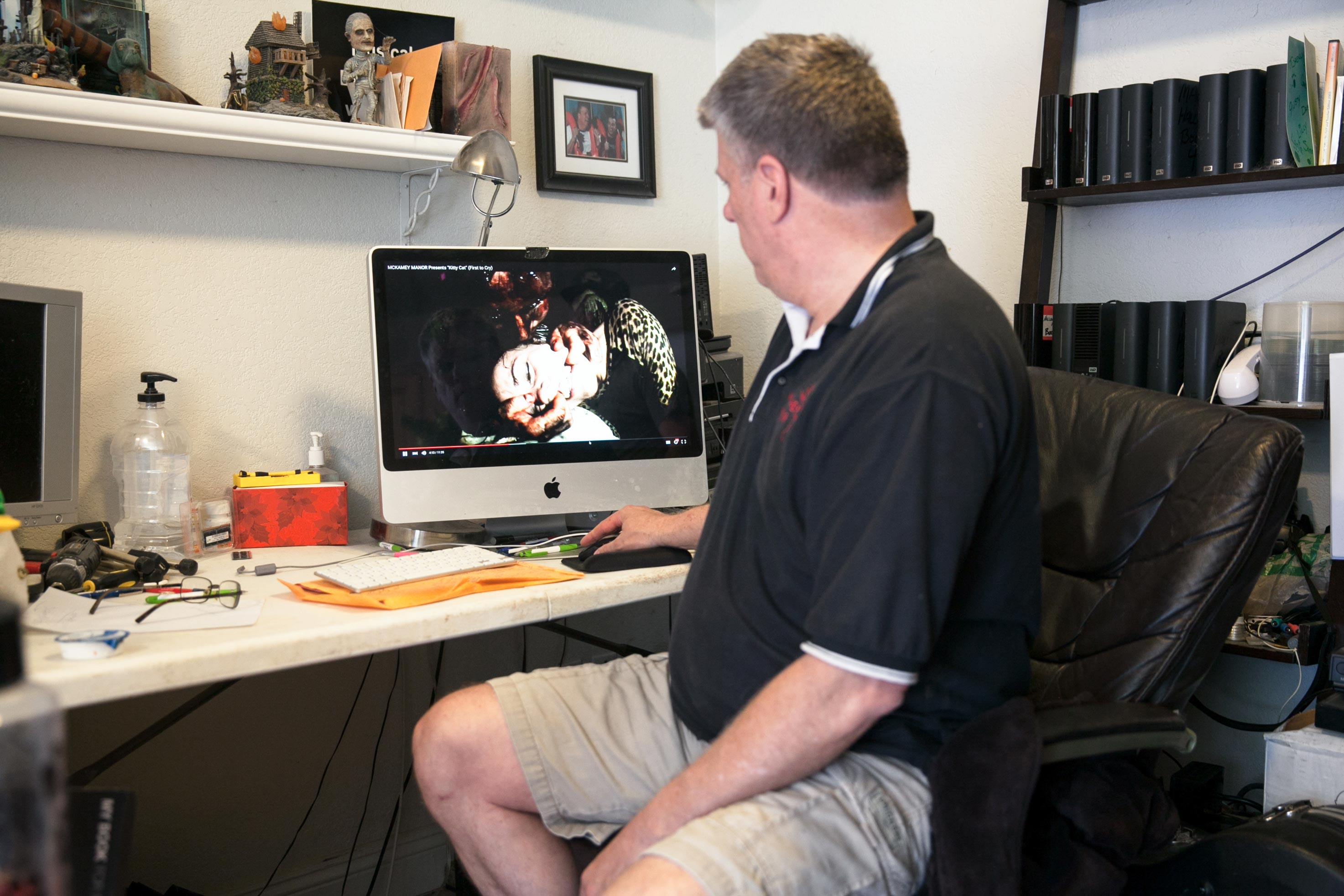 “I maybe get two hours of sleep,” Russ says. “All night long, I think of new stunt scenarios and rehearse them in my head, going over all these different options to find out what works and what doesn’t just by visualising it.”

Russ is determined to create the most realistic experience possible, believing that if he can’t instil genuine terror, he has failed. His love for haunts dates back to when his father used to take him trick-or-treating – he was entranced by one particular yard that featured a maze built from cardboard boxes – but the psychological warfare is something he picked up from serving twenty-three years in the Navy.

“Nobody is altering minds or brainwashing people but there are mind control tactics that you can do to make people more submissive,” says Russ, who still has a buzz cut. “That’s the name of the game: getting in your head and psychologically beating you down – fast.” 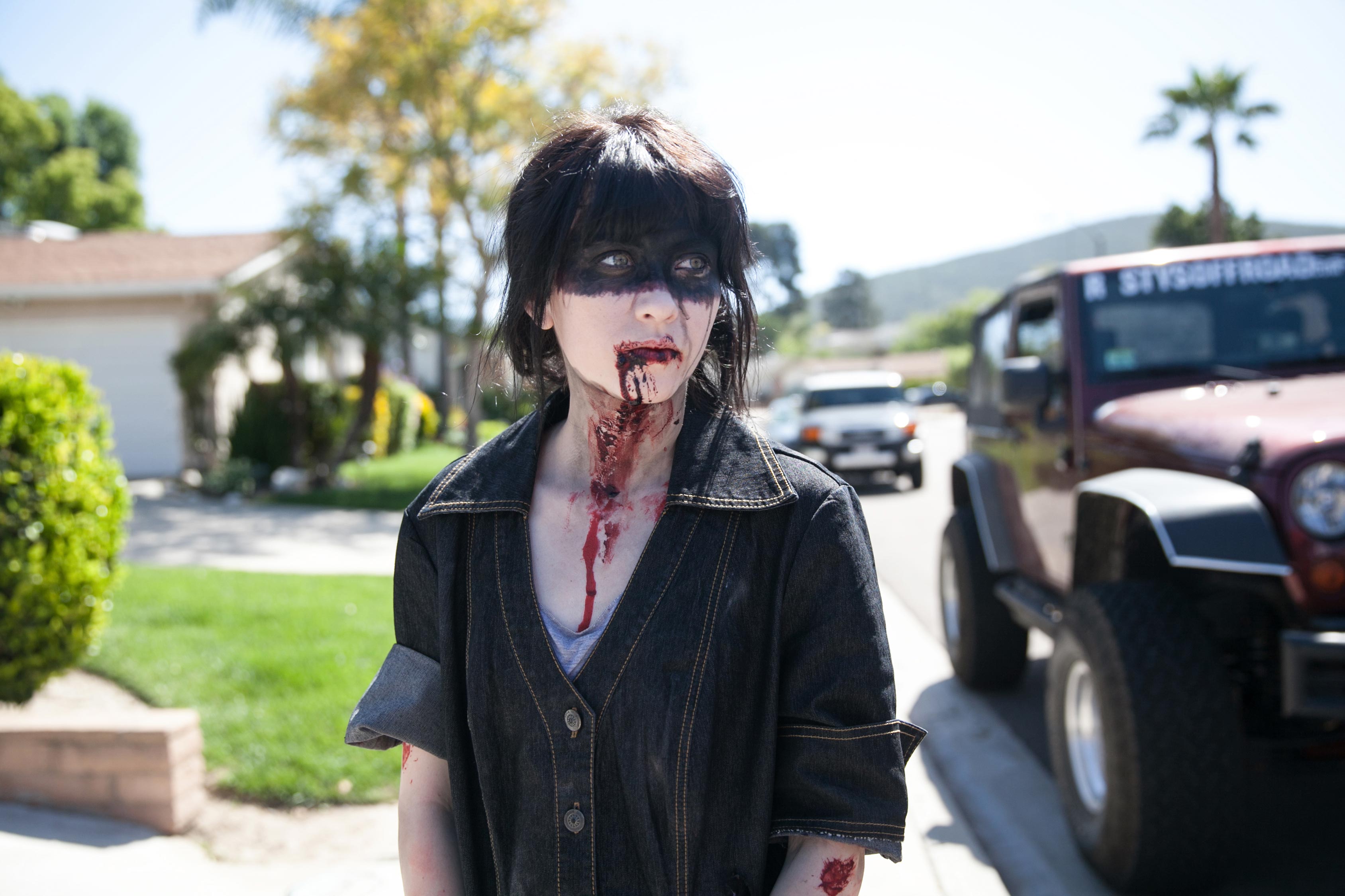 During pre-interviews on Skype, Russ begs prospective guests to reconsider the torture they’re about to put themselves through, while surreptitiously using that time to make note of any potential fears he picks up on.

If he finds out that someone is claustrophobic, for example, he’s going to make sure they can hardly move. Russ calls this the ‘discovery phase’ of building a guest’s personal horror movie, tailoring the nightmare to fit their character.

Like a team of private detectives, Russ and his volunteers comb the internet searching for any trail of personal information that might tip them off to fears and insecurities.

“My job is to have them confide in me and trust me,” he says. “I’ll be the guy talking nice and calm with them… but I’m instigating everything too.” 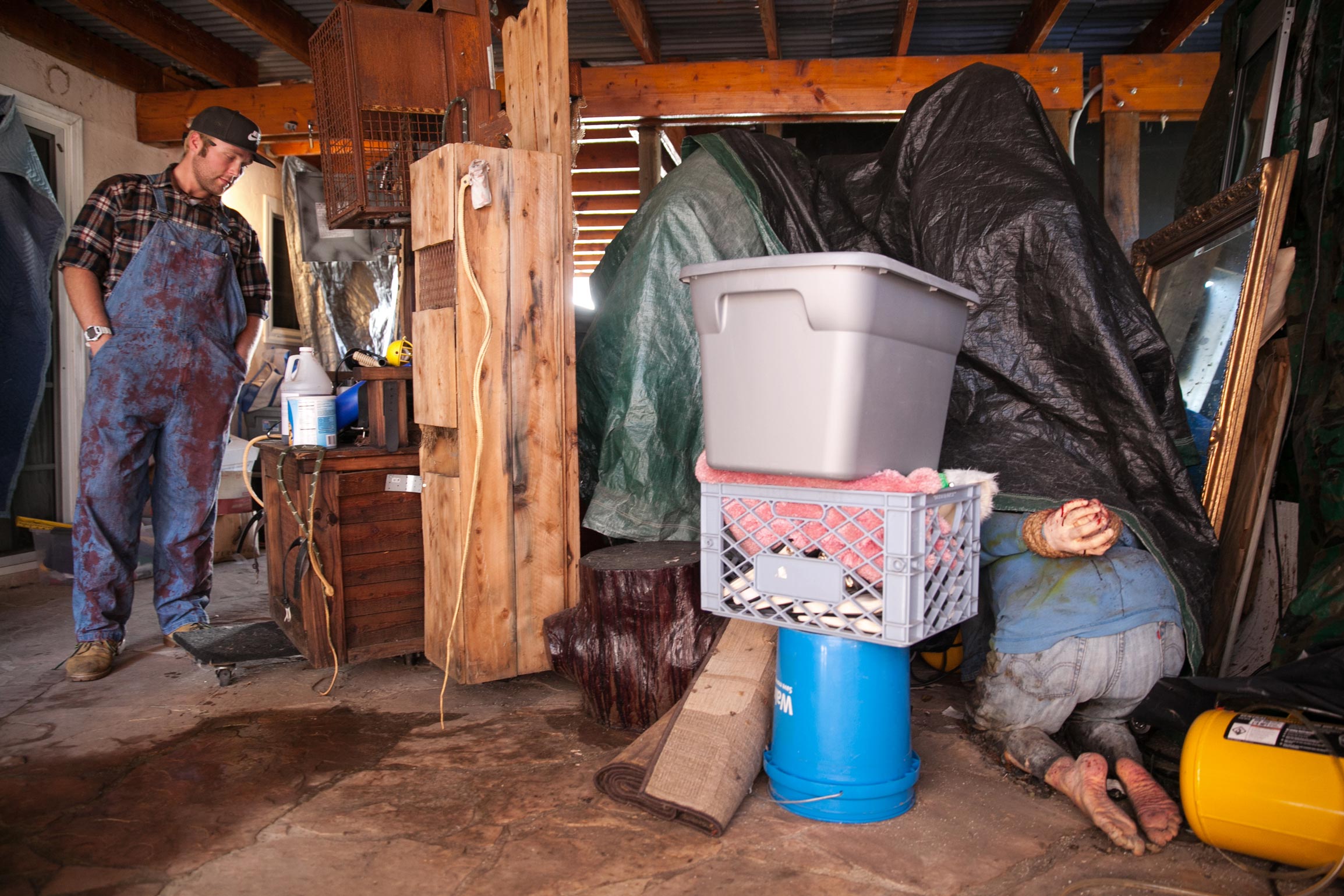 Pressed for more detail, Russ refuses to elaborate on his tactics. Rumours abound about what really goes on at the manor – there are several Facebook groups which monitor and criticise the haunt – and Russ has been accused of everything from organ harvesting to murder. He just chalks it up to free publicity and loves to troll his haters right back.

Russ is proud of the fact that McKamey Manor has never had a lawsuit or injury – except one heart attack. But that’s another reason the videos are integral to the experience: it’s handy to have exculpatory evidence just in case.

What does bother Russ, however, is when people assume that he’s some sort of sadomasochist manipulator, or that there must be a sexual element to the experience. The payoff for most participants, he believes, is the adrenaline rush that comes from getting as close to death as possible.

“It’s the mind games that get you. There is nothing sexual about it. You truly feel like you’re going to die. That’s a powerful emotion… a bonding experience.” 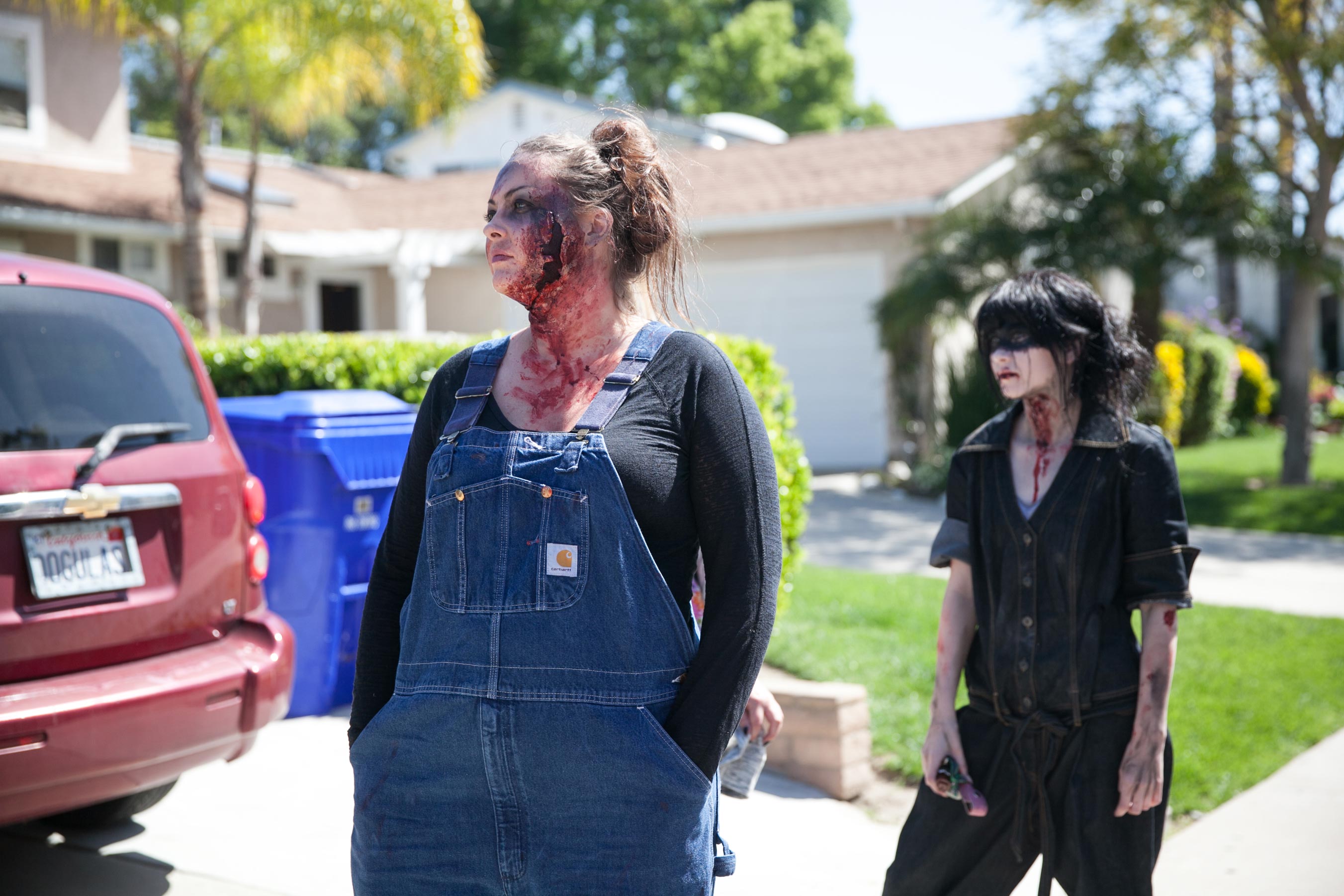 That bond is tangible when you’re among the volunteers. They laugh with each other and share war stories from different haunts, as if the fear they’ve both encountered and dished out has somehow turned them into a family.

“The reason we have this bond,” Russ says, “is that so many people know about [McKamey Manor] but so few have done it.”

That may be about to change, as a McKamey Manor TV series is in the works (one which Russ can’t reveal any information about). Though the fifty-six-year-old had to seriously consider how such a move may affect what has essentially been a lifelong hobby, he decided it was a risk worth taking.

Asked why Russ has invested so much time in the house over the years, his partner Carol doesn’t hesitate. “After he’s gone,” she says, “he wants people to say, ‘Do you remember McKamey Manor’? It’s about a legacy.”

Find out more about McKamey Manor.

Linkedin
RELATED ARTICLES
OTHER ARTICLES
Theo McInnes’s photos of the annual event provide an intriguing snapshot of contemporary Britain.
Activists and campaigners are fighting back against new laws that would seriously undermine the ability to take industrial action, calling it an attack on fundamental workers' rights.
AI companies that develop image-generators using copyrighted artwork from the internet are coming under fire from artists who say that it amounts to theft.
A new law change is enabling Britain’s donor-conceived children to know the truth about their origins – but campaigners say the fertility industry must do more to protect people.
Photographer Becky Tyrell went down to the fading banger and stock raceway to meet a community desperate to keep it alive.
The action took place in response to the 200 asylum-seeking children who were placed in hotels run by the Home Office who have gone missing.