Art & Culture / The internet’s substitute mothers are here to help 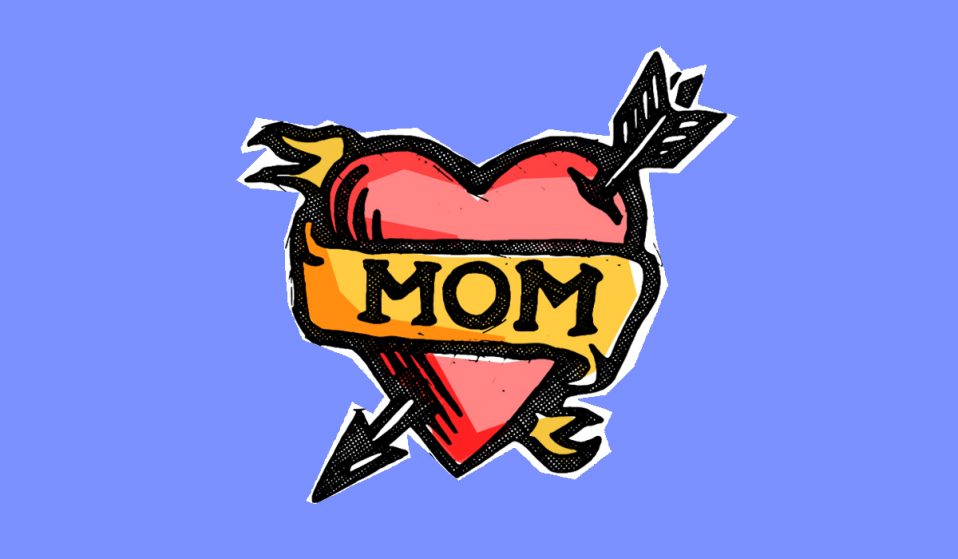 As the pandemic leaves people feeling scared and vulnerable, Reddit users are seeking out stand-in mothers for advice, love and comfort – but some experts suggest it might not always be the healthiest coping strategy.

As the pandemic leaves people feeling scared and vulnerable, Reddit users are seeking out stand-in mothers for advice, love and comfort – but some experts suggest it might not always be the healthiest coping strategy.

Rebecca was having a terrible day. She’d had an altercation with a stranger while out running and like many women put in that position, she was terrified. In a bid to find some comfort, she sent a message to her mother about her experience: “I’m so grateful that you’re safe,” her mother responded. At that point, Rebecca’s second mother chimed in: “You’re scared and it’s understandable, take your time.” Her third mother told her that she loved her, after suggesting that Rebecca should take a self-defence class in order to better protect herself. Mothers four and five gave her even more militant instructions than mother three – they wanted her to start carrying weapons. Each of them, in their own way, offered support while calling her pet names, such as ‘honey’, ‘sweetie’, and ‘love’. They were all very glad that she was OK.

The subreddit where Rebecca posted her concerns, r/MomForAMinute, is home to over 164,000 members. They use the community to cruise for advice, love and comfort from substitute ‘moms’, sharing anything from high test scores to breakups and cooking attempts. The number of members has seen a sharp rise during the pandemic – almost doubling in the space of a year. “Lots of people are scared and upset right now, and just need a virtual hug,” explains the group’s mod.

Each ‘letter to mom’ – the notes or pictures submitted to the community – is met by an anonymous, digital surrogate, eager to lend their support. Often multiple mothers appear, jostling for the attention of the reader: “I’m proud of you honey!” one might write in response to a stranger’s first attempt at cooking eggs, while another will offer some gentle advice on how to better cook the eggs next time. On offer are different types of mothers to choose from, although overwhelmingly, they write in a saccharine tone that reads half Soccer Mom, half Stepford Wife. The subreddit is run primarily for women and non-binary people by women – the alternative is r/DadForAMinute, which caters more to male and non-binary Redditors and with just over 28,000 members, is a significantly smaller community.

“The mother-child relationship is the bedrock of our ability to fall in love and form mutual, healthy, loving relationships in later life,” says psychologist and psychotherapist, Corinne Sweet. According to Corinne, in the context of a global pandemic, the issues that stem from disrupted maternal relationships are compounded. “The pandemic has made us vulnerable, has challenged us to look after ourselves, and be self-sufficient. Yet, if your mothering was interrupted or poor, this can be difficult. Learning to re-parent yourself in the pandemic has been a major challenge for many.” For those who are not natural self-nurturers, then, the world of r/MomForAMinute can feel like a safe haven.

Users of the community are often seeking out comfort they cannot find at home. “She’s not the huggy-feely type,” 28-year-old Sam*, who identifies as non-binary, tells Huck of their fragmented relationship with their mother, “I’m really into fantasy and she just doesn’t get it.” Sam has found solace in the Reddit mother figures who appreciate the toys and knitted creations they make, which they often share pictures of with the community. 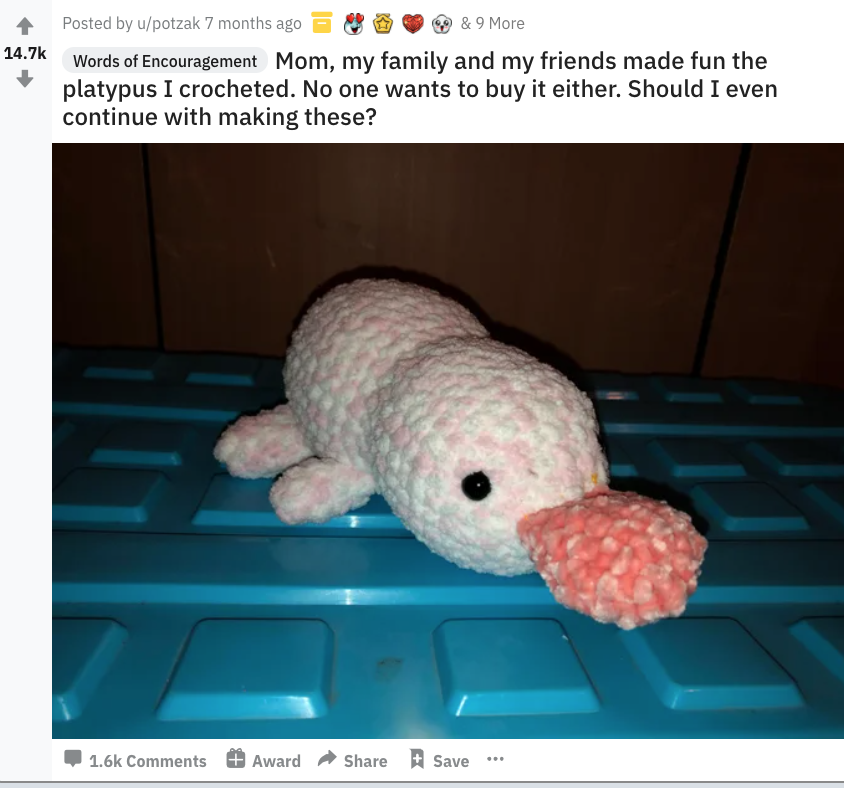 Another member, Georgia, 26, says she’s been more active on r/MomForAMinute during the pandemic. “I was brought to the sub because my mom doesn’t really know how to be nurturing,” she says. “I share my grief, my pride, the things I’m excited for, everything, and I always have someone to show me love through those moments.”

Another ‘child’ of the subreddit, 18-year-old Anna, explains that the need for the community has become more acute within the harsher climate created by the pandemic, observing that: “People on the sub just need to get some kindness because they aren’t getting that outside of Reddit.” This point was echoed by the sub’s moderator, who says: “If everyone you know is just as troubled [as you], it can feel intrusive to burden them further with your problems. This place provides people with that extra help.”

This is, of course, not an entirely new phenomenon. ‘Stand in’ mothers have always existed IRL, and drag ball culture and LGBTQ+ groups, in particular, have spearheaded the concept of ‘families of choice’ for those who have been abandoned or disowned by their biological families. Surrogate mothers have also appeared on different online platforms. On TikTok, ‘mommy’ influencer @bemagnificent has risen to stardom by releasing ‘point of view’ videos which show her doing everything from checking your temperature to buying you a new phone, to announcing family plans on a snow day.

What makes r/MomForAMinute different, though, is that these cookie-cutter stereotypes are sought out anonymously, which, according to Corinne, gives users the full freedom to express themselves. “We can often feel embarrassed about the level of need we feel for healthy mothering, as it takes us back to being very small and vulnerable,” she explains.

Aside from anonymity, therapist Sally Baker says that users drawn to this community may be looking for the validation they didn’t receive in childhood. “They are looking to be rescued or bolstered up by an external source, rather than having confidence that they are enough and can take care of their own wounded inner child,” she says. Sally explains that the need for this kind of comfort has been exacerbated by the pandemic: “People who have unresolved trauma are often busy distracting themselves with other things: doomscrolling, shopping online, lots of hobbies and activities. [In lockdown] there are people who’ve gone into overwhelm and meltdown because they’ve had to confront what they’ve been trying so hard to hold at bay.”

She adds that while there can be something “healing” about sharing in this way, therapy is a preferable option. “Specific therapy can offer inner-child work to resolve childhood trauma, which could obviate the need for external mothering. The adult is then able to step up and be their own mother, through pivots in self-compassion and self-love,” says Sally.

The ‘mothers’ of this online community cite similar reasons to their surrogate children for turning to anonymous mothering. “My family has been in a trauma cycle for the last three generations,” says 23-year-old Leah, explaining that she had become an internet mother herself to “pass on a little bit of sunshine” and to help protect other people from similar situations. Another Reddit mom named Amanda, 35, says that she was abused and “grew up lacking safety and unconditional love,” adding: “I don’t want anyone else to go through that.” 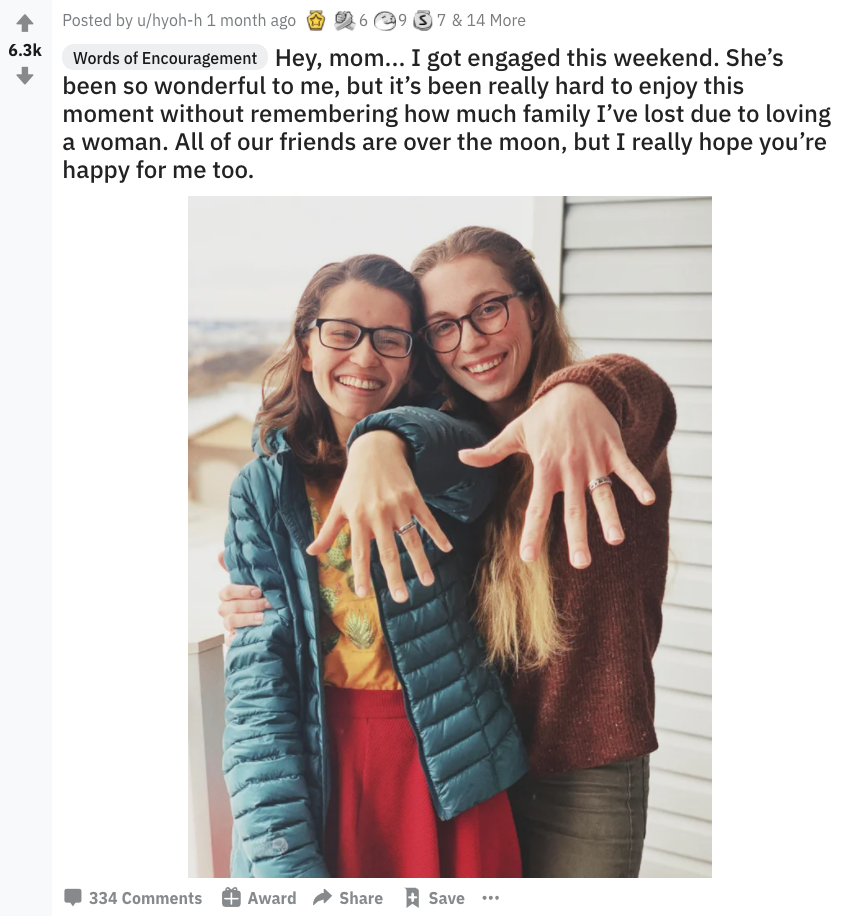 A third ‘mother’, Natasha, age just 17, has fully immersed herself in the world of online motherhood, regularly posting ‘mom-esque’ updates for others to see, such as dog pictures and snippets of Thanksgiving. Her own relationship with her mother is fraught, which is what led her to r/MomForAMinute. “I want other people to know they aren’t alone and have someone to listen to them,” she says, “to make other people’s days better – even if it’s just a little bit.”

Corinne explains that wanting to compensate for the past is a common route for people with difficult relationships with their mothers. “It can be empowering to give healthy maternal concern and care as you heal yourself,” she explains. Sally adopts a slightly different view, explaining that the women of the sub could be taking a lateral approach to tackling past traumas. “I call this ‘sideways activity’: you are deflecting your own needs and acting them out in another arena. So someone who is feeling very unloved or uncared for might adopt a caring role in society. However, the drawback is they’re not doing their own work – they are distracting themselves by trying to repair the damage that was done to them by helping other people.”

The line between mother and child is often blurred within the community, as many of the mothers themselves started out as children on the sub. This was the case with 30-year-old Fiona, who was originally a child of the subreddit seeking validation and kindness. During the pandemic, however, this began to change. “When the lockdown happened I started having symptoms of CPTSD [complex post-traumatic stress disorder],” she explains. “Part of my therapy for it was reparenting: thinking of my younger self, and what she would have needed.”

“Through reparenting, I was able to access this older side of myself – a motherly, wiser self. I started writing myself notes in this voice, and found it so incredibly healing, that I decided to share them with the subreddit – almost every day since February [2021],” she says of her transition to Reddit motherhood. “This sub is filled to the brim with people who are in need of a mother; the posts never stop coming. I imagine a lot of folks are separated from their families during the pandemic and need an extra boost.”

An ‘extra boost’ is perhaps the best way to describe the fluffy and fantastical world of r/MomForAMinute. While comforting and wholesome in its intent, it has to be acknowledged that this community, on its own, cannot rid people of their trauma or replace the benefits of proper therapy. But it is also a supportive, kind and often much-needed break from reality or difficult IRL mothers for those who desire it.

Linkedin
RELATED ARTICLES
OTHER ARTICLES
In the latest OFFF Dispatch, the enigmatic designer dives into his process, connecting the dots between his unique and varied creative output.
Government plans to make it harder for people to go to university will only entrench inequality.
In our first OFFF Dispatch piece, the Arce Studio founder shares her tips on standing out from the crowd.
The situation in Afghanistan remains dire, with many groups facing persecution at the hands of the Taliban.
Our new magazine is here, starring the inimitable Mitski. Order your copy now and join us on a trip around the world.
After news broke last week around an expected reversal of the 1973 landmark law that made abortion legal in the US, protestors gathered in the UK in support of American women.