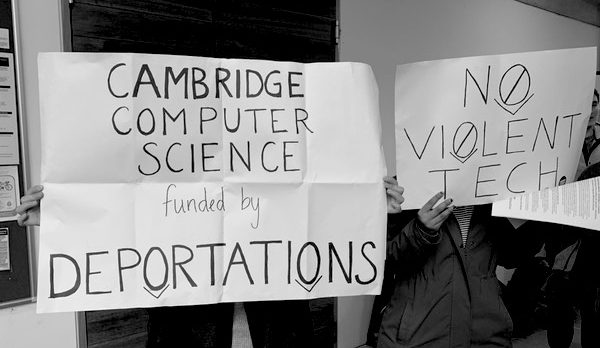 Photography © courtesy No Tech For Tyrants

A group of young activists are hoping to expose and undermine the links between education and technology companies.

Through a mix of protests, teach-ins and online campaigns, a group of activists are hoping to expose and undermine the links between education and technology companies.

Last year, after the pandemic threw the exam system into chaos for students across the UK, grades were awarded using an algorithm. Supposedly designed to be a ‘fair’ way of classifying students, it actually encoded biases into the grading process. This was because one of its inputs was the ‘historical grade distribution of a school’ (in short, a school’s past performance). Inevitably, this skewed results in favour of pupils at schools with a record of high attainment, which, unsurprisingly, particularly benefited those at private institutions.

The response to the fiasco was vociferous and widespread. Students up and down the country took to the streets chanting “FUCK THE ALGORITHM”.

It’s almost exactly one year on from those protests the day I speak to Mallika Balakrishnan and Dr. Matt Mahmoudi, two founding members of the student activist group, No Tech for Tyrants. This feels apt, given that the group was created to tackle the relationship between discriminatory technologies (and the companies that build them) and education. Since 2019, the group has targeted everything from recruitment fairs to computer science departments through a mix of in-person protests, teach-ins and social media campaigns. Wherever big tech is able to exert power and influence on campus, No Tech for Tyrants will attempt to expose or interrupt it.

“I would say that was a bit of a watershed moment,” Mahmoudi says of the A-Level fiasco. “I think we’re seeing more and more students engaged in this space. We see more and more mainstream human rights organisations coming forward, as well in the UK, addressing the issue of rights and digital infrastructure.”

Given the complexity of the systems of oppression the group are trying to dismantle, No Tech for Tyrants are focusing on where they can have the biggest impact. And because of the importance of higher education to the technology industry – whether that’s to recruit people to fill their ‘talent’ pipeline or to fund research which furthers their own unscrupulous interests – the group occupies a useful strategic position.

By disrupting large tech companies’ access to students, either by raising students’ awareness of their relationship to state violence or by putting pressure on institutions to end formal relationships with them (Cambridge Computer Science and Technology Department, for example, has a ‘supporters club’ which tech companies pay to join to make it easier to recruit students of the department), No Tech for Tyrants believe they can both undermine the ‘establishment’ status of such companies, and, more practically, prevent them from acquiring the intelligent and ambitious people they need to grow in the future. (The University of Cambridge has been contacted to comment on the supporters club but has not responded.)

Although the group was founded by students from Cambridge, Oxford, St Andrews, and Edinburgh, it’s constantly evolving and growing, fluctuating between 10 and 30 members. While the core group – whose ages range from 20 to 30 – remains at those institutions, Balakrishnan tells me they also have members doing work at Goldsmiths, the University of Kent, and UAL, among others. “Something that’s been really important to us is making sure that we’re not a bunch of people from elite universities, when so much of the work we’re doing is about breaking down that hierarchy.”

Their academic interests are diverse: Balakrishnan’s background is in migration and politics; she recently graduated with a masters in Latin American studies. Mahmoudi, meanwhile, has spent more time in tech. Having recently completed his PhD, he is now a researcher and advisor at Amnesty Tech.

If the interdisciplinary nature of the group is what makes it special, it also makes it hard to define. “[For] even just the two years we’ve been around sometimes people will struggle to determine if we should be called a tech group, or a digital rights group, or a human rights group, or a migration group, or a divestment campaign” Balakrishnan says. “That intersection of the kind of work we’re trying to do is really crucial, but sometimes, can be hard to put into a correct and neat box.”

No Tech for Tyrants’ beginnings coincided with the wave of protests against ICE in the US. This was in the Summer of 2019, which was, Balakrishnan remembers, “around the time of really high profile ICE Mississippi raids”. This led to a broader movement across the tech industry, with protestors and employees putting pressure on companies like Amazon and Microsoft to cancel their contracts with the border agency.

This was a catalyst for the group’s founders: “We also realised around the same time that the big companies that were underpinning the kind of work that ICE was doing in the US were also increasingly becoming entangled in government services in the United Kingdom,” Mahmoudi says.

One company whose presence in UK universities particularly concerned the group was secretive data analytics company Palantir. Founded by PayPal billionaire Peter Thiel – whose right-wing sympathies have been reported elsewhere – the company has been accused of aiding state violence. Migrant organisation Mijente has called the company the “most prominent supporter of the deportation machine in Silicon Valley” on account of the role it allegedly plays in the infrastructure that enables migration raids and deportations. (The company created ICE’s Investigative Case Management system, which allows the border agency to target and process individuals deemed to be in the US illegally). Palantir was contacted to respond to Mijente’s description and its work with ICE but hasn’t responded.

No Tech for Tyrants’ campaigning in the early months of its existence focused on tackling what it refers to as the ‘tech talent pipeline’ – where big tech companies court students at institutions promising them high salaries and ‘meaningful’ work. Mahmoudi explains that campaigns typically involved showing up at recruitment fairs with banners and posters. The aim was twofold: “It’s as much of a signaling to the students to not work for these companies by effectively telling them what kinds of violence these companies are involved with, as much as it is also telling the company that they don’t get to get away with it just because they’re in a new country or because they’re in an elite institution.”

Sometimes, No Tech for Tyrants would attend events “where Palantir pretends to be having an academic debate around privacy and civil liberties and it ends up being a recruitment drive,” Mahmoudi explains. The group would raise deliberately provocative questions, asking, for example, how many families the company helped to detain at the US border.

This isn’t to say No Tech for Tyrant’s work solely focuses on their fellow students or tech monoliths. They also put pressure on computer science departments at their respective institutions to cut ties with “racist tech.”  This work underlines the complexity of the relationship between big tech and higher education. Recruitment fairs are a big part, but influence can also be exercised more subtly in curricula and teaching.

Over time, the group has grown in numbers and become more collaborative. It worked, for example, with the University and College Union during a sustained period of strike action by the union. The group ran teach-ins and teach-outs “in which we talked about the intersection of the tech industry, computer science departments, [and] migrant rights,” Mahmoudi says. In March 2020, for example, they partnered with Oxford Migrant Solidarity and ran a session on the close relationship between surveillance software and universities. “It was a full house,” their Twitter account notes.

The group also worked with Privacy International on a report on the extent of Palantir’s embeddedness in the UK, and ran a concurrent campaign called #SendPalantirPacking. This was an important contribution in spotlighting Palantir’s relationship with the government and NHS, which ultimately culminated in the high-profile lawsuit by OpenDemocracy that exposed Palantir’s NHS deal.

Over the last 18 months, the group has had to move to a more virtual mode of campaigning. “We had a fairly high profile campaign earlier this year called #RecruitMeNot that was focused on similarly trying to disrupt that recruitment pipeline for Google,” Balakrishnan says. (This was in response to the firing of AI ethicists Timnit Gebru and Margaret Mitchell.) “That campaign happened completely virtually – and it was so different than, I think, a lot of the other tactics in which we had relied on in-person capabilities.”

Google relies on universities to recruit. They're betting that firing @timnitGebru & @mmitchell_ai will blow over. We demand better.

📢 Sign the pledge: https://t.co/FULIZEA85b
🔥Join us next week for 2 events you won't want to miss!

At its core, #RecruitMeNot consists of a pledge that “commits students to refuse working for Google until the company meets basic accountability demands set out by Google employees at Google Walkout For Real Change”. This helped to evolve and continue the conversation about the company’s practices after Gebru and Mitchell’s firings. The extent to which it will transform a company as big as Google remains to be seen, but with workers at the company also forming a union earlier this year, No Tech for Tyrants’ work should be viewed as part of a broader trend of political action against big tech.

No Tech for Tyrants’ fluidity as an organisation might make them hard to define or describe, but it’s clear that they have a strong sense of being connected to not only other activism and scholarly work, but also to broader historical shifts. “No Tech for Tyrants was born in a really tumultuous year” Balakrishnan says. “Right before the pandemic started, right before George Floyd was murdered – and then the entire world kind of felt like it was on fire… and then literally caught fire, and now we’re here and it’s somehow even stranger.”

But even if the world is on fire, she isn’t pessimistic. “We’ve been able to create a real community of people who are invested not just in changing policy but also building a movement.” That matters. When big tech’s power feels inevitable, recapturing this sense of collective agency is vital.

Linkedin
RELATED ARTICLES
OTHER ARTICLES
By turning a real-life crisis into daytime television fodder, TV bosses have once again shown themselves to be completely out of touch with audiences.
Rogue landlords are exploiting young and inexperienced renters and leaving them in mental and financial turmoil, reports Niall Hignett.
With skyrocketing rents, packed out viewings, bidding wars and more, renting in London has never been harder.
A 37-year-old woman shares how her abortion led her to become a clinic worker, and the abuse she’s received in that role.
Following the announcement of an 80% hike in the energy price cap from 1st October, crowds gathered outside the offices of energy regulator Ofgem to protest and declare their intention to undertake a payment strike.
A new project is documenting formerly incarcerated people as they transition back into civilian life.