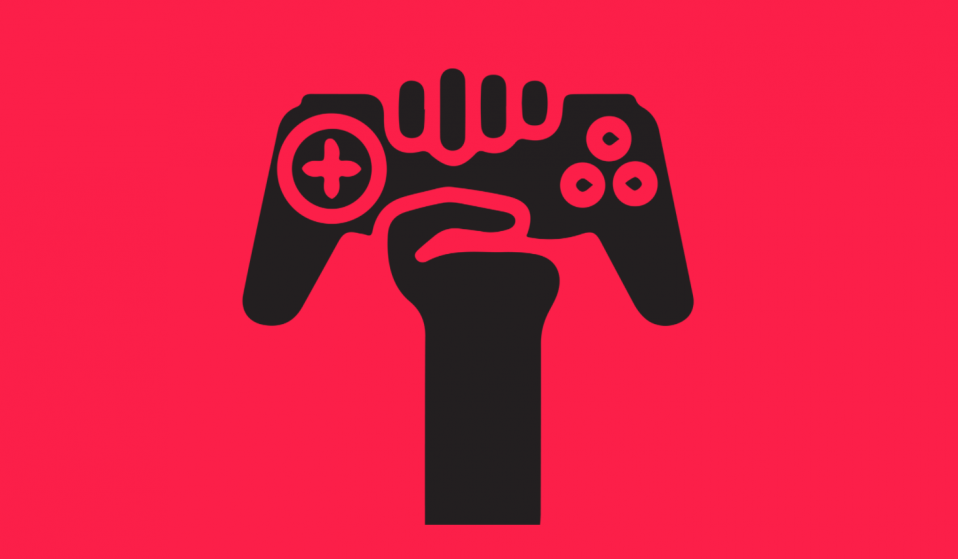 Workers are coming together and unionising in an effort to transform the gaming industry.

Racism, sexism and overwork have long plagued the gaming industry. But now, individuals are coming together and unionising in an effort to transform their workplaces.

Jessica Hyland has been playing computer games since she was old enough to mash her tiny fingers on a keyboard. She didn’t realise making games could be a job until she was a teenager, playing the ‘90s life simulation game, Creatures. “It’s a really magical feeling to see something you’ve made start moving around on its own,” she says. That solidified her decision to pursue game development as a career.

More than a decade later, and that childlike wonder has given way to dissatisfaction. “We end up being exploited because we don’t want to risk being fired,” she adds. “Then we can’t do this job that we love.”

This fear keeps people trapped under gruelling working conditions, too scared to speak out for fear of being fired and replaced. And these fears aren’t unfounded. The gig economy, zero-hour contracts, fire and rehire practices have all ballooned under Big Tech.

Hyland recounts how, in her first job in gaming, one of the company executives tried to blackmail her into quitting. “He was making vague threats, implying that I was replaceable. You have hanging over your head that there are people who would kill to be in your job.”

Tech companies are bastions of the myth that loving your job means you are immune to the toils of work. Companies have become ‘families’ and burnout has become a badge of honour. This has helped foster a culture of overwork, in which a growing number of tech workers say they are burned out and struggling to maintain a work-life balance. According to a recent report from Harvey Nash, mental health concerns among tech workers have increased by 75 per cent during the pandemic.

The hyper-competitiveness of Silicon Valley makes it easy to understand why the tech industry is still largely non-unionised. Why would people stand in solidarity with their coworkers when they’re desperate to prove they’re more committed than them?

For years, this has worked in the favour of bosses. In the gaming industry, unpaid overtime is legitimised through what’s known as ‘crunch’ – the rush to finish a project by working long hours. The latest GDC State of the Game Industry Survey found that, out of 3,000 workers, 69 per cent worked more than 35 hours a week. A few reported 90-hour weeks. In a separate 2017 survey from gameindustry.biz​​, 74 per cent of game workers said they weren’t paid overtime, but the majority (90 per cent) were expected to.

Most telling is that over 73 per cent of people in the 2021 survey said they worked more than 40 hours a week due to “self-pressure”, rather than from management. This internalised glamorisation of overwork is yet another barrier to unionising in the gaming industry.

Dissatisfied with the state of the industry, Hyland had volunteered with the not-for-profit organisation Women in Games. “I never quite felt like it was tackling the root cause of the problems I saw,” she says. It was only after the international pro-union campaign Game Workers Unite started gaining ground in 2018 that Hyland saw the urgent need to unionise. In the same year, Hyland got together with her London-based peers, and Game Workers, a branch of the Independent Workers’ Union of Great Britain (IWGB), was born.

The tech industry is, as Hyland puts it, “historically anti-union and dominated by capitalist interests”. This mean workers are often unconvinced by unions: “Everyone was a little bit anxious at first,” she reflects. “Many game workers who want to unionise worry that if they stand up for themselves, they’ll be fired or blacklisted. It’s sad, but they’re not wrong.” (While it’s illegal for an employer to retaliate against you for being a union member, some employers find other ways to legally dismiss ‘troublemakers’.)

But union meetings quelled fears, and IWGB Game Workers now has more than 500 members across the UK. “We’ve taken on cases of unfair dismissals, pay issues, and so many harassment and sexism cases,” Hyland says. Currently, the team is helping employees of software makers Lockwood Publishing who are facing “unlawful” layoffs. Their aim is to unionise specific workplaces like this one.

We stand in solidarity with the workers who must not be ignored.#LockwoodLockouthttps://t.co/ah8IN14hDu pic.twitter.com/6K8V6CxLQI

Gaming unions have also been at the forefront of taking on the industry’s lack of diversity. Men make up around 80 per cent of the game industry, and 75 per cent of game developers worldwide are white. In the UK, as of 2020, of the 10 per cent of industry workers that identify as BAME (Black, Asian and minority ethnic), only two percent are Black.

The industry was forced to reckon with this during the Black Lives Matter protests of 2020. Several gaming companies raised money for charities and publicly pledged support, but Black workers are still significantly underrepresented in the industry, particularly in leadership roles. Less than a year after the protests, Activision Blizzard, the mammoth developer behind titles like Call of Duty, World of Warcraft and Overwatch, refused to adopt diverse hiring practices. It claimed it would create “an unworkable encroachment on the Company’s ability to run its business and compete for talent in a highly competitive, fast-moving market”.

A few months after this statement, a lawsuit was bought against Activision Blizzard that detailed a grim “frat boy” culture where sexual harassment was “constant”. Male employees allegedly joked about rape and groped women during drunken “cube crawls” throughout the office. In one horrifying account, a female employed died by suicide during a company trip. The lawsuit alleges this was “due to a sexual relationship she had been having with her male supervisor,” who was found by police to have brought sex toys to the trip. (Activision Blizzard has called the claims “distorted, and in many cases, false”.)

Alongside the rampant sexual harassment, women, who make up just 20 per cent of the Activision Blizzard’s 9,500 employees, were paid less, discriminated against for childcare needs, promoted slower and fired more frequently. The dominance of white men in these spaces is reflected in video game characters, too. Black and Latinx characters are steeped in stereotypes, while female characters are hyper-sexualised. Activision Blizzard did not respond to Huck’s request for comment.

The reality is grim for women and people of colour across the industry. Hyland says she’s “had issues with male coworkers” in the past, and blames the “bro culture” pervasive in the industry on misogynistic managers who hire people just like them. “These guys end up failing their way to the top. Having this union helps us show them we won’t stand for it.”

Last year proved to be a landmark year for gaming’s labour movement. In the US, workers walked out, went on strike, penned petitions and open letters. Activision Blizzard were a key target of these movements. A few days after Microsoft acquired Activision Blizzard for a colossal $68.7bn sum, while workers at Raven Software, a subsidiary of Activision Blizzard, announced they had formed the Game Workers Alliance.

Collectively you have more power to negotiate than individuals, which is why they don't want you doing it!

Leading the Gamer Workers Alliance is Jessica Gonzalez, a former senior test analyst at Activision Blizzard, who also formed the Activision Blizzard King Alliance. Gonzalez resigned ​​from her role in December. “It’s been a difficult journey that caused me to leave the company due to a toxic culture and hostile environment of trolling, harassment and discrimination,” she told Huck. She chose to form the union because she wants better for her peers who still work for the company. “The culture tells you to be thankful. If you complain about work, you’re a problem.”

Activision Blizzard refused to voluntarily recognise the union, forcing the Game Workers Alliance to file a petition with the National Labor Relations Board. They need a supermajority vote from Blizzard workers to succeed. While they keep pushing, other movements plough on.

In December 2021, the workers of indie game developer Vodeo Games made history with the first certified video game union in North America. “We’re forging our own path, and hoping that makes it easier for others to follow,” says Myriame Lachapelle, one of Vodeo’s 13 employees.

We are workers at Vodeo Games, and today we’re thrilled to announce that we have come together to form Vodeo Workers United – the first certified union of videogame workers in North America! Organized with @CODE_CWA. 🎉

Lachapelle began organising before she came to Vodeo with Game Workers Unite Montreal. At her previous gaming company, she was spending months working 80 hours a week. “I had to stop working because I completely burned out a few times,” she says. “And as one of two women on the team, I wasn’t taken seriously.”

Thanks to the union, Vodeo is completely different, Lachapelle says. “When I say something, people listen to me, and it sometimes still takes me by surprise,” she admits.

“One of our biggest wins is that, because our founder Asher Vollmer voted to voluntarily recognise us, we have both employees and contractors in the unit,” Lachapelle explained. More than half of Vodeo’s workers are contractors, and they will now have a say in upcoming bargaining conversations.

Progress is of course gradual, but workers like Lachapelle are determined to transform their industry. “We believe that all workers deserve a union,” she says, “no matter their employment status or under what conditions they work.”

Linkedin
RELATED ARTICLES
OTHER ARTICLES
For over a decade, gamblers have won big by employing people to place live bets from the court. But does this dubious method still work?
Thousands attended the annual event this year to wheelie through the city and call for ‘knives down, bikes up’.
The idea that a younger generation is abandoning work has become a popular narrative online, but it doesn’t necessarily reflect reality.
Photographer David Corio’s archive offers a glimpse inside a revolutionary era of music and nightlife.
A group of young Palestinians have found temporary freedom in the act of parkour, reimagining wreckage and ruins as a series of high-octane playgrounds.
Financial turmoil is pushing people who work in the sex industry into more dangerous and desperate situations as a means of survival.