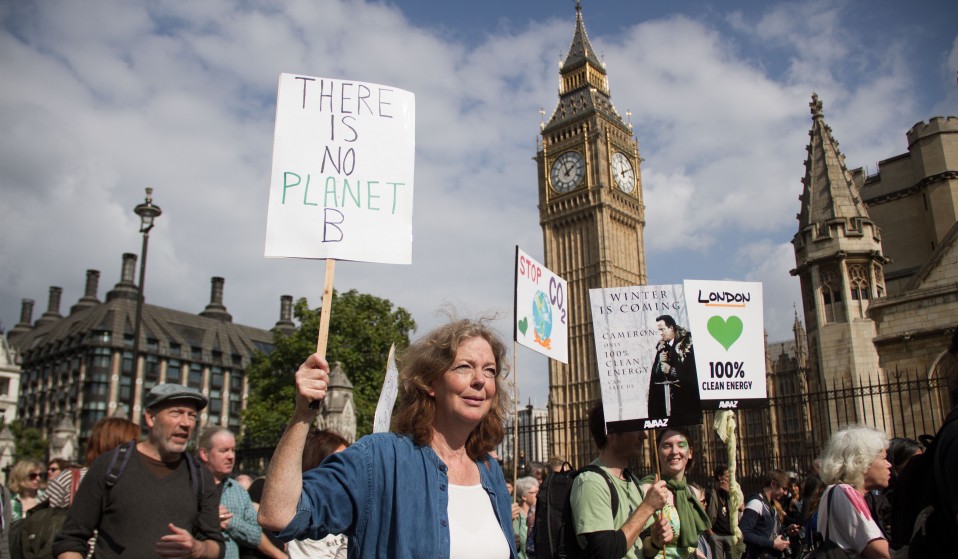 Huck hit the streets of London with protestors calling on world leaders to protect the environment.

Huck hit the streets of London with protestors calling on world leaders to protect the environment.

40,000 people took to the sunny streets of London on Sunday 21 September and joined hundreds of thousands around the world, from Papa New Guinea to Paris, who mobilised to make their voices heard and call for concrete action on climate change in the People’s Climate Mobilisation, the biggest coordinated environmental protest in history.

After the unravelling of 1997’s Kyoto Protocols and the failure to achieve binding commitments at Copenhagen in 2005, protestors were motivated by the need to send a strong message to world leaders before an important meeting at the UN in New York on Tuesday September 23.

The New York leaders meeting is the first step in a series of talks and summits that culminate in the UN Climate Change Conference in Paris in late 2015 and there was a clear sense among activists of the need to get this right.

If we are to limit a rise in global temperature to just two degrees celsius by 2100 and avoid the catastrophic social and environmental consequences scientists predict if temperatures increase above this level, concrete political action is needed over the next decade to lay the groundwork to move to a low carbon society over the next century.

Huck spoke to Avaaz, WWF and Oxfam to find out what motivated them to take part and what we can all do over the next days, weeks and month to help avoid environmental catastrophe.

Bert Wander, Media Campaigner at Avaaz and a lead organiser of the London march 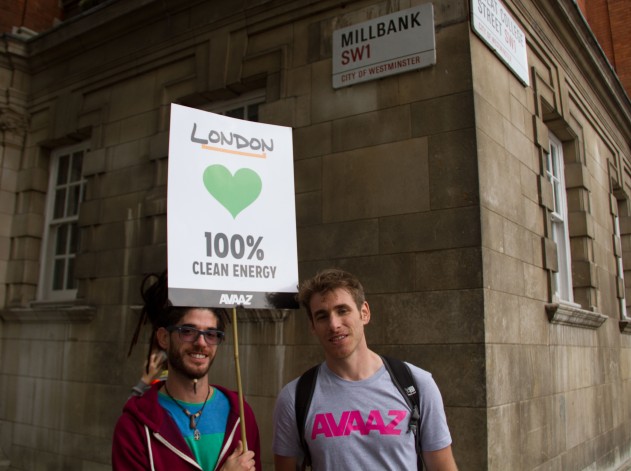 Bert Wander (right) with a demonstrator

Why did you feel it was important to be involved today?
Climate change is the defining issue of our time and it affects not just how we live, but if we live. What we’ve seen time and time again with climate change is that the science is very clear, but the policies from our leaders haven’t dealt with the problem that scientists have been very clear in telling us that we have. What we’re calling for is for the political elite and the world leaders who are meeting in New York on Tuesday to come together, start dealing with this crisis and stop burying their heads in the sand and hoping it’s not happening. Now what that looks like is a transition from our current energy system to one of 100% clean energy and that’s a big job, but it’s a job we can do. Already 20% of the world’s energy comes from renewable and clean sources, so we’re looking to grow that right up to %100 within a generation, because that is the only way we can stay safe.

How important are the upcoming round of political negotiations leading up to the UN Climate Change Convention in Paris in 2015?
It couldn’t be more important. If you read the science and listen to the scientists, we are approaching dangerous levels of carbon dioxide in the atmosphere which will have huge knock-on effects. Recent climate events have made it clear that this is happening now and it’s happening here. This isn’t an environmental issue any more, this is an everybody issue. That’s why we need urgent action at the UN. It is unusual for world leaders to meet so early in the process around this issue, usually they turn up to sign it off after the deal has been negotiated. So we’re sending a message to them to say loud and clear that we have an overwhelming mandate to move to 100% clean energy, we have the technology to do it and the knowledge of what will happen if we don’t do it. We need them to exercise their leadership and their power to switch us over to a clean energy track, which everybody agrees will save us and secure our future. 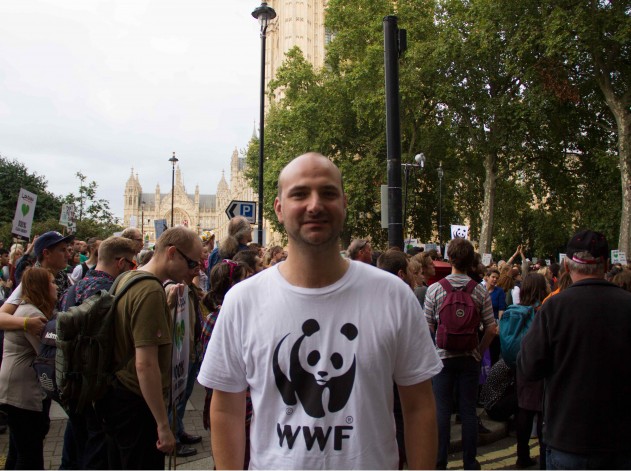 Why did you feel it was important to be involved today?
One of the main reasons is to show a diversity of solidarity around the world. This is just one of many different events and marches going on around the world and we wanted to show our leaders that climate change matters. It’s a risk but it’s also an opportunity. There’s a positivity to today, that decarbonising and moving away from fossil fuels doesn’t necessarily need to be the big, bad, scary thing, as many people have tried to present to us over previous years. There’s actually a moment of opportunity here where we can turn our backs on fossil fuels and move to a clean energy-based economy and that’s one of the key reasons why I wanted to be here.

How have we got to this point?
For a wide variety of reasons we haven’t got our act together collectively, as a species, as a global community yet. That’s despite knowing for arguably two decades that climate change is an issue, we are to blame and it will get worse if we don’t do something to reduce our emissions in the coming decades. I think we now realise we’ve got this pretty small window – but we have got a window, that’s important to to stress.

We need to urgently decarbonise our global economy, starting in a deep way in the next decade or so. If we don’t do that, the fear is that we will have lost the opportunity to stop the very worst excesses of climate change, and the 4-5 degree rise in world temperature by the end of the century that would have devastating impacts for many people and habitats around the world. The challenge is to try and not go to that place by keeping temperature rises at a manageable level over the decades ahead. 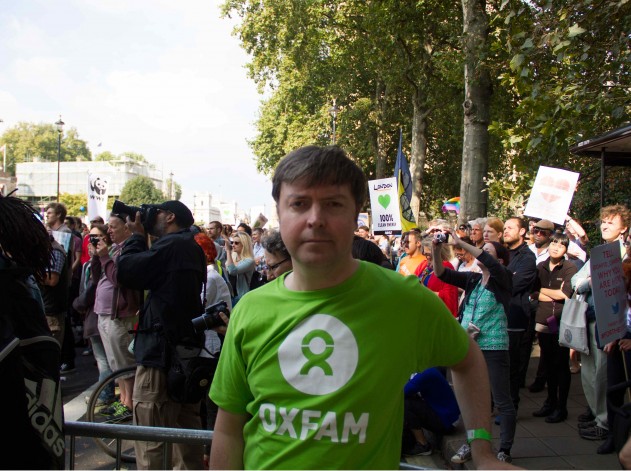 Why did you feel it was important to be involved today?
When disasters strike, when people are knocked out of their homes by what we call natural disasters but what are really unnatural disasters, Oxfam are the people who are left to pick up the pieces. I’ve met the people left hungry and homeless by climate change-related disasters and I hate seeing that suffering. I want there to be less for Oxfam to do, rescuing people from crises like that, not more. Since world leaders last met to talk about climate change, that was just five years ago, 112,000 lives have been lost in climate-related disasters. 650 million people have been affected and half a trillion dollars of damage has been done. When people think about climate, they rightly think about nature but first and foremost this is a human catastrophe and as human beings we have to act.

How can people contribute to the struggle over the next days, weeks, months, and beyond?
Keep up the pressure. Write to politicians. Visit politicians, tweet at them. Tell your friends and family. Talk to your kids about this. Get this being discussed in your churches or your Scout group, your mosque, your chess club, your football team or when you go out. It’s so important to gather more and more people to keep piling the pressure on politicians. We will not win this in one day but we can win this. This is today’s human rights struggle. It’s so amazing what people have done today and all we can ask is to keep the faith because if we keep on the pressure we will win.

Linkedin
RELATED ARTICLES
OTHER ARTICLES
Photographer Becky Tyrell went down to the fading banger and stock raceway to meet a community desperate to keep it alive.
At his West Bank restaurant, Fadi Kattan established himself as the voice of modern Palestinian cuisine. Now, he’s bringing his innovative, bold flavours to the UK’s capital.
Theo McInnes’s photos of the annual event provide an intriguing snapshot of contemporary Britain.
Following the release of his debut single, Deyaz talks battling addiction, dealing with his struggles through music, and building a budding music career from his living room.
After blocking the Scottish government’s gender recognition reform bill, Westminster is now devising further changes to the law to make it harder for trans people to self-identify.
Photographer Sean Maung reflects on documenting a small town in Pennsylvania afflicted by high levels of unemployment, poverty, violence, crime, and addiction.