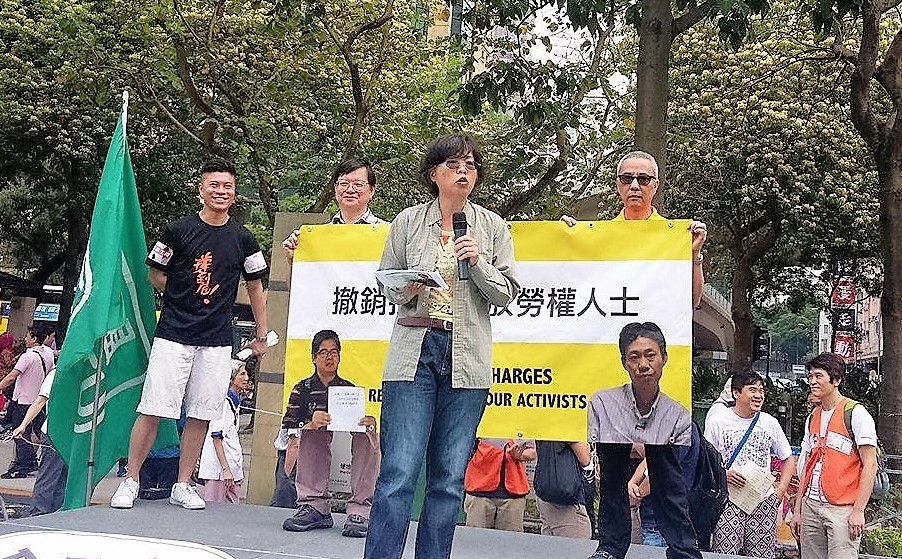 Protestors in Hong Kong took to the streets to demand the release of two labour activists.

This May Day, protestors in Hong Kong took to the streets to demand the release of two labour activists arrested for organising with workers in the garment industry for better conditions.

May Day demonstrations in Hong Kong this weekend saw thousands of campaigners demand better working conditions and the release of imprisoned union organisers in China’s garment industry. The May Day march was organised by the Confederation of Trade Unions (CTU) and saw protestors march from Victoria Park to the Central Government Offices in Hong Kong. According to local journalists, around 2,500 trade unionists, pro-democracy, migrants rights, and civil society campaigners attended the protest. 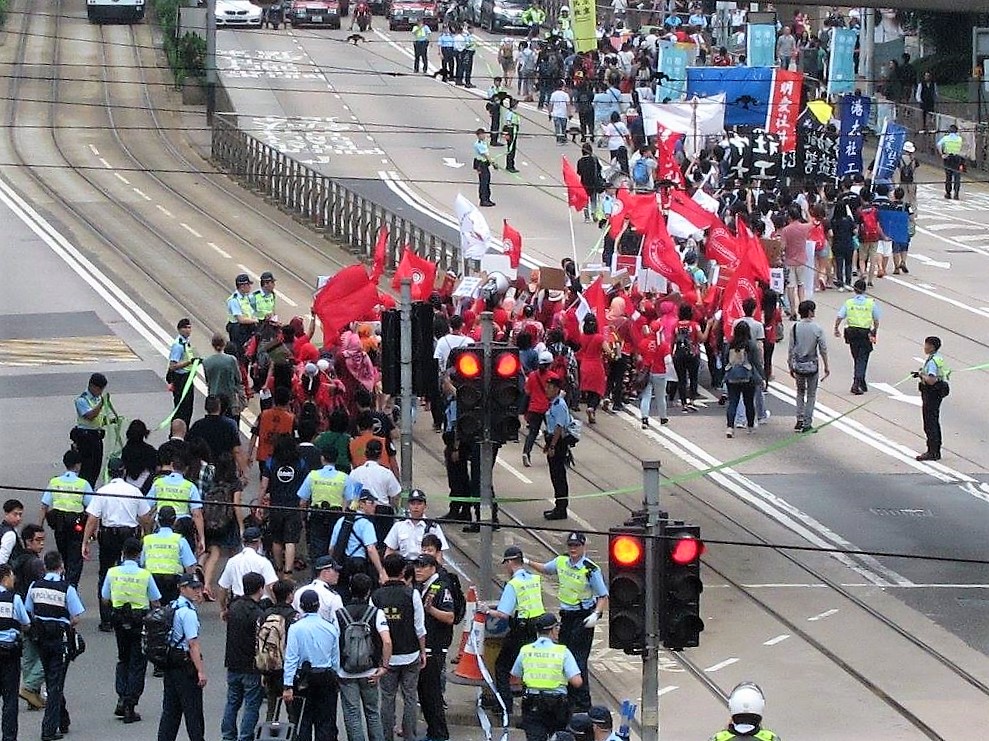 The protests – which called for working hours to be set at 44 hours and for the creation of a universal pension scheme -are also part of a growing movement of people demanding that the Chinese Government release two labour rights activists who were arrested in December 2015. Zeng Feiyang and Meng Han work for the Panyu Workers’ Centre in Guangzhou in the Pearl River Delta, a manufacturing heartland nicknamed the ‘factory of the world’ because of the sheer volume of goods produced there.

Zeng Feiyang and Meng Han worked with migrant labourers, many of whom came to Guangzhou to work in garment and shoe factories. The stated aim of the NGO is to provide legal aid for migrant workers and help these workers use the law to protect their rights. According to research by China’s National Bureau of Statistics there were 277 million rural migrant workers working in mainland China in 2015.

The economic slowdown in China has hit the Pearl River Delta hard. Shoes and apparel have been some of the hardest-hit sectors in China over the past two years, with many factories shutting-down, or merging together. Others have moved further inland, or simply left China for South and South East Asia to cut down on costs.

These changes have triggered a sharp rise in the number of strikes over factory closures, unpaid wages, neglected severance pay, and lost social contributions.

Zeng Feiyang and Meng Han were, according to experts, arrested along with other labour rights activists as part of a crackdown on labour rights groups in China that aimed to quell unrest and prevent social instability from spreading. 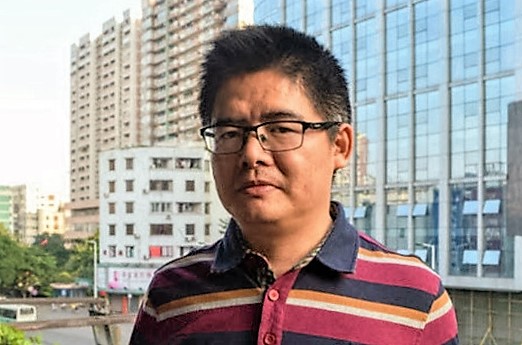 The two labour rights activists were involved in organising workers at the Lide Shoe Factory in Guangzhou which was facing relocation and closure. The Lide Shoe Factory was a Taiwanese supplier producing for companies like Calvin Klein, Ralph Lauren, Coach, and Chinese supply giant Li & Fung. Strikes and collective bargaining led workers to win around 120 million yuan in social security funds and compensation.

“They trained up the workers, supported them to elect their own representatives and then negotiate with their bosses for a better settlement,” says May Wong of Globalization Monitor, a non-profit organisation based in Hong Kong. “The detainees did not violate any law in China and to fight for labour rights is not a crime.” 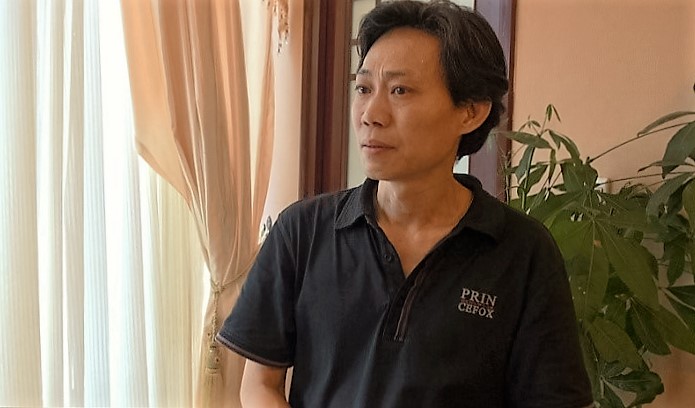 Now however the two men have been changed with ‘gathering a crowd to disturb social order,’ a charge which could potentially carry a life sentence.

On 1 May, Wong addressed crowds at a May Day demonstration in Hong Kong and called for their release. “The arrest of the labour activists is unacceptable and the Chinese government should release Mr. Zeng Feiyang and Mr. Meng Han immediately,” she argues.

“What the two detainees had been doing was to train and support workers to elect their own representatives to negotiate with their employers. Obviously, the government does not want to see so many workers organised to fight against their bosses and has thus tried to put a halt on labour activism.

There are also calls for the brands who used the Lide Shoe Factory to put pressure on the Chinese Government. “Given the high profile arrests in this case, brands sourcing from the Lide Shoe factory have a clear role to play in calling for an end to this injustice and for human rights to be respected in China,” says Anna McMullen from British NGO Labour Behind the Label.

“Calvin Klein and Ralph Lauren must use their economic influence to pressure Chinese officials to release the detained activists. Their shoes are a product of this struggle.” Labour Behind The Label is now petitioning the brands to use their influence on the Chinese Government. 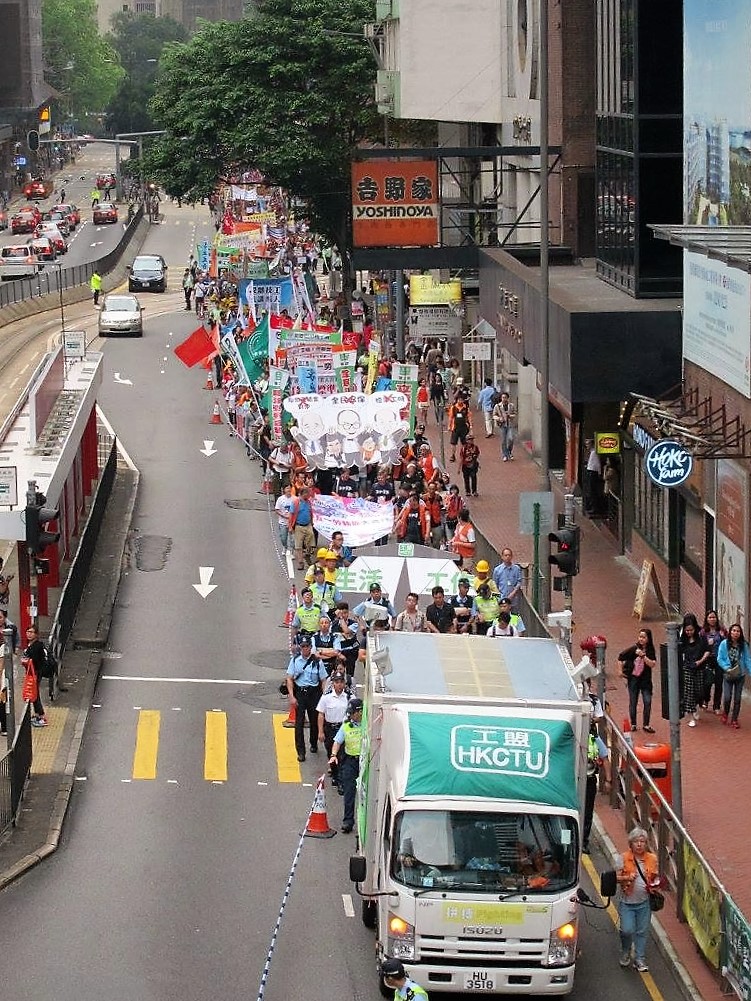 In Germany, a new report has been released to highlight the wider problem of violations of international labour law standards in the Chinese shoe industry. The report – Tricky Footwork – documents the difficulties faced by shoe factory workers: “Salaries are far below a living wage, they are forced to work overtime, have insufficient protection from health and safety risks, are faced with unpaid social insurance contributions and suffer state violence to suppress strikes” said the reports Co-author Anton Pieper, from German NGO Sudwind.

With the continuance of economic discord in China, and a crackdown on NGOs who help with disputes, there is more uncertainty ahead for factory workers in Guangzhou as they make shoes for some of the world’s best known brands.

“Brands should be responsible for workers who directly or indirectly produce their products,” Wong concludes. “The brands have a duty to ensure human rights are respected and that the political repression of activists comes to an end.”

Linkedin
RELATED ARTICLES
OTHER ARTICLES
Tristan O’Neill’s shots of dancers caught in moments of reverie at the height of rave’s golden age are a testament to the UK’s legendary club culture.
Theo McInnes’s photos of the annual event provide an intriguing snapshot of contemporary Britain.
A recent High Court ruling against the right to wild camp in Dartmoor National Park sparked the largest land protest in history – and campaigners say their fight is not over yet.
Photographer Sean Maung reflects on documenting a small town in Pennsylvania afflicted by high levels of unemployment, poverty, violence, crime, and addiction.
Since 2007, Gideon Mendel has made 20 trips to document floods in 13 countries. The result is an alarming record of what has already been lost to the climate emergency.
A new exhibitions brings together the work of photographers who documented the deep unrest of these pivotal decades.