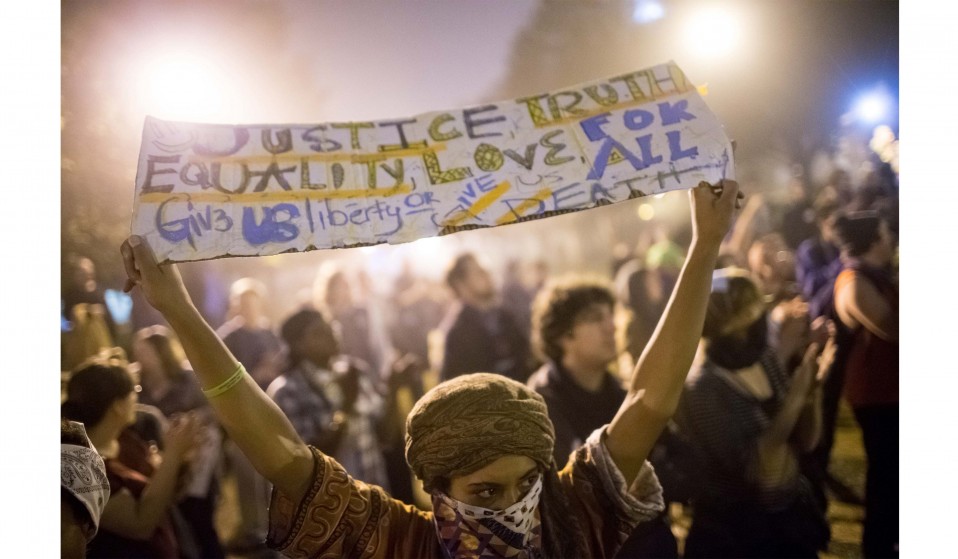 On Martin Luther King Jr. Day, Huck explores how institutional racism remains extensive in the US and worldwide.

On Martin Luther King Jr. Day, Huck explores how institutional racism remains extensive in the US and worldwide.

Last year was a bloody year in America. The killings of Michael Brown, Tamir Rice and Eric Garner by police achieved huge media attention, but they are just three names on a list of more than 100 people of colour killed annually by police (according to statistics released by the FBI) – most of whom never make the news.

When police officer Darren Wilson shot dead the unarmed teenager Michael Brown after an altercation in Ferguson, Missouri, on August 9 it sparked outrage in the local community and around the world. The tenacity of the Ferguson protesters and the police’s heavy-handed, militarised response have helped keep the issue of police brutality in the news agenda ever since Brown’s death, but it hasn’t stemmed the tide of violence. To date, no officer has been convicted for the death of Brown; or of Eric Garner, who police in Staten Island, NY, killed in an illegal choke hold on July 17; or for the shooting of twelve-year-old Tamir Rice who had been holding a toy gun in Cleveland, Ohio on November 22.

How can this be possible in a country that markets itself as the world’s greatest democracy? How did we arrive at a situation where, according to non-profit newsroom ProPublica, the per capita death rate at the hands of police for young black people is twenty-one times higher than for young whites? And will the wave of protests sparked by events in Ferguson bring about any real change? Huck spoke to some of the most respected academics on race relations to try to answer these questions, and figure out where the root of the issue lies. 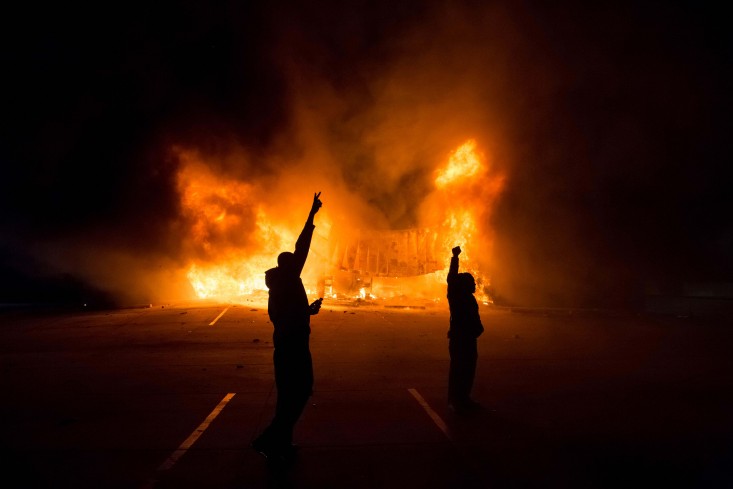 Cassandra Chaney, associate professor at Louisiana State University’s School of Social Work and Ray Von Robertson, associate professor of Criminal Justice at University of Louisiana at Lafayette, have co-authored a number of studies on violence in the US. Their 2013 paper ‘Racism and Police Brutality in America’ looked at how police/African-American relations have changed since Rodney King’s beating by the LAPD in 1991 and the subsequent riots after the acquittal of the officers involved. Their research has shown that police violence has increased over the last two decades and they point to a study by the Malcolm X Grassroots Movement that estimates an African-American is killed by a person in a position of authority on average every twenty-eight hours. “In short, things have gotten much worse from Rodney King to Michael Brown,” Cassandra says. “When one looks at the number of black men that are killed, we must realise that it is only through a miracle that very few stories involving the police’s mistreatment toward blacks sees the light of day through the media. There are literally thousands of ‘Michael Browns’ all over the United States, whose names and stories will remain untold.”

“These recent events have to be set in the context of a foundational, fundamental, extensive, systemic racism.”

Police violence towards people of colour is just one manifestation of institutional racism, which has been at the heart of the American system since the country’s earliest days, says Joe Feagin, professor of sociology at Texas A&M University and one of the leading experts on US racism. He provides a sobering reminder of how deep its roots go. “For over half of the US’s 408 years of existence we had slavery as our foundational economic and political system,” he explains. “This country did not even become an officially free country until 1969. So only for forty-six years have we been close, officially, to liberty and justice for all – to freedom. Essentially for about eighty-three per cent of our history we had a totalitarian system for the people of colour – for blacks, Native Americans, indigenous peoples, Asian-Americans, Latinos. So these recent events have to be set in the context of a foundational, fundamental, extensive, systemic racism.”

Among many historical injustices, Feagin highlights the exclusion of black people from the Homestead Act (which parcelled out cheap swathes of government land) and the GI Bill (which gave soldiers returning from WWII access to subsidised education and housing), as two major policies that have prevented black people from acquiring economic and social capital necessary to achieve equal citizenship with whites. He acknowledges that white families, like his own, have historically benefitted enormously at the expense of blacks and puts today’s violence in the context of American policing’s heritage. “The policing system in the US, and this is directly relevant to Ferguson and New York City, started with slave patrols in the slavery states,” he explains. “The first organised police forces were slavery patrols made up of ordinary whites, mostly not slave holders. Those ordinary whites worked for the slave holders to make sure the slaves didn’t organise and rebel and overthrow the system.” 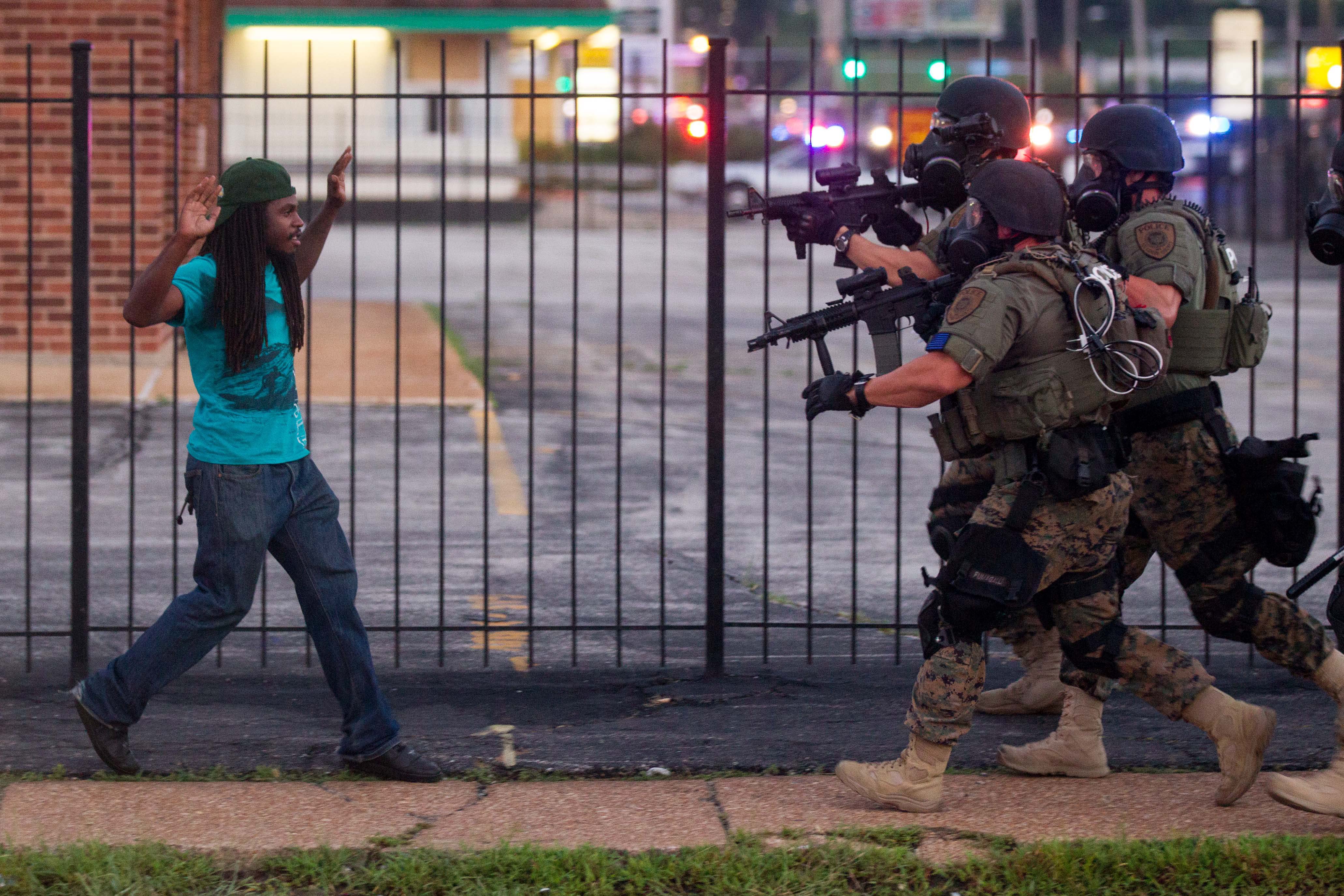 Although few countries were shaped so extensively by slavery, it would be a mistake to think institutional racism is solely confined to the US. All countries who held colonies around the world presided over a similar system. “Institutional racism in the world- system emerged in modernity,” Eduardo Bonilla- Silva, professor of sociology at Duke University reminds us. “Capitalism was racialised from the beginning and remains so. The West developed at the expense of the rest and has continued exploiting the people Frantz Fanon labelled as ‘the wretched of the world’.”

South Africa’s experience since Nelson Mandela’s election as president in 1994 and his triumphant victory against the apartheid system demonstrates the challenges of overcoming institutional racism, even when the black majority hold political power. “We’re watching events in Ferguson very closely because our society is very similar, with a history of slavery and segregation, followed by an eventual transition to democracy and human rights,” explains William Gumede, associate professor at the University of the Witwatersrand, Johannesburg, who has studied institutional racism at home and internationally. “The challenge in both our societies is that we’ve had racism ingrained for such a long time. Although the legislation and the laws have changed, it’s still in the social DNA. It is also in the DNA of very important of institutions like law enforcement agencies and that’s a problem.”

“The West developed at the expense of the rest and has continued exploiting the people Frantz Fanon labelled as ‘the wretched of the world’.”

The Missouri Grand Jury’s judgment on the legality of Michael Brown’s killing, delivered on November 24, offered an opportunity to end months of protests and civil unrest that have raged since the shooting. Instead, as the court announced its decision not to indict Wilson, protesters marched nationwide in opposition to the verdict and Ferguson once again erupted in flames. Media coverage has too often focused on incidences of violence and looting, but protests have been predominantly peaceful. “The looting and non-violent protests are, in my opinion, an unapologetic demand for justice,” Cassandra explains. “Although the looters are taking an anti-social stance to achieve this aim, many of them are doing so because they are frustrated with a judicial system that has consistently and brazenly failed them. The non-violent protesters want immediate change. The verdict sickens their mind, heart and spirit, and engaging in non-violent protests is a way to connect in the same space with individuals from various races, genders, and socioeconomic backgrounds who see this verdict as a miscarriage of justice.”

Peter Dreier, professor of politics, urban and environmental policy at Occidental College, LA, draws parallels between today and the 1955 murder of fourteen-year-old Emmett Till after he was believed to have flirted with a white woman in Mississippi. Rosa Parks later said that Emmett had been on her mind the day she refused to give up her seat on the Montgomery bus and his death is seen to have catalysed a generation into action during the Civil Rights era. As in the 1950s and 1960s, protesters have organised actions in cities around the world to show their solidarity with the protesters in the US. 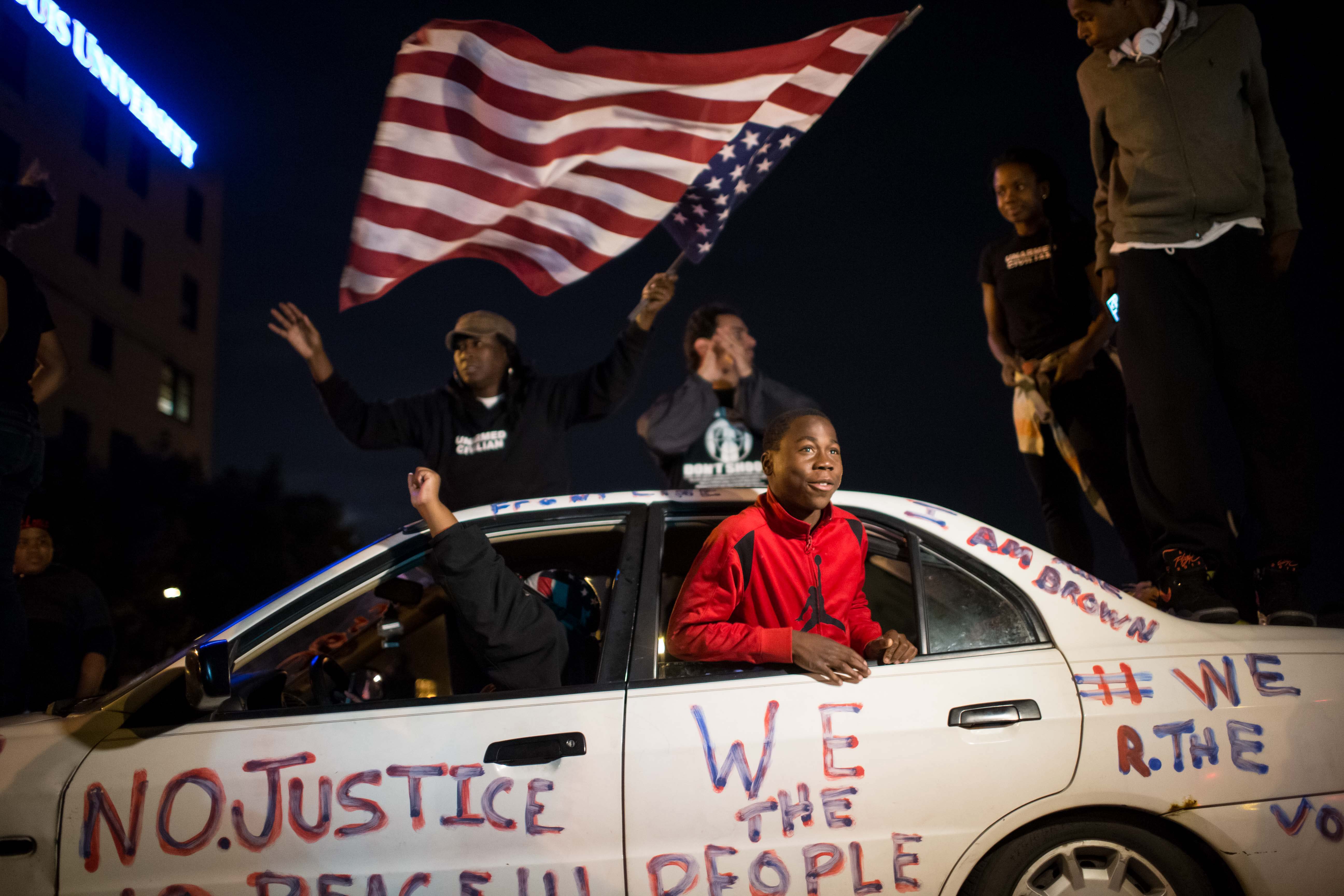 Public anger is a key driver of social change, but Ernesto Cortés, Jr., a community organiser and recipient of the MacArthur Foundation’s Genuis Grant, draws an important distinction between what he calls hot anger and cold anger. Hot anger drives people to act irrationally and misdirect their force, he says, whereas cold anger motivates strategic action, focusing efforts on structures of oppression, exploitation and injustice.

To reduce police violence, communities must begin to hold law enforcement accountable for their actions. “The various attempts at police accountability and citizen review boards have been completely useless, since none has really truly called into question police prerogative on the streets, as these grand juries prove,” George Ciccariello-Maher, assistant professor of political science at Drexel University, Philadelphia, argues. “The most important first step is to abolish the tools they use to shield themselves from public scrutiny, from laws like the Police Bill of Rights in California and elsewhere, to groups like the Fraternal Order of Police.”

“The challenge for our generation is to direct anger into considered, concrete action.”

Feagin argues for “aggressive affirmative action” to democratise police forces in order to ensure that their racial makeup reflects the communities they are entrusted to protect and serve, but cautions that reforms must go much further. “Sending white officers who discriminate against black citizens to jail would be a pretty good first step,” he explains. “But that won’t happen until blacks are represented among judges, prosecutors, district attorneys, top police officers and police commissioners in fair numbers.”

The challenge for our generation is to direct anger into considered, concrete action that will address not just symptoms – like police brutality against minorities – but the roots of institutional racism. It will require both organising online and coming to the streets to make demands and build coalitions for change on a local, national and international level. Mahatma Gandhi, Martin Luther King, Jr., Nelson Mandela, Stokey Carmichael and many other civil rights leaders were in contact with allies in other countries and all drew immense inspiration and practical guidance from one another. Global action appears like a daunting prospect, but in the age of the internet it has never been easier to debate, strategise and build multinational coalitions for change. Understanding the deep roots of institutional racism can make the obstacles to overturning it seem insurmountable, but in the words of Martin Luther King, Jr., “The arc of the moral universe is long, but it bends towards justice.”

This article appears in Huck 48 – The Origins Issue, out now.

Linkedin
RELATED ARTICLES
OTHER ARTICLES
Writer, musician and activist Bryony Beynon, who co-directs Hollaback London – an org to end street harassment – curates the most inspiring acts of activism in 2014.
In the aftermath of Ferguson's grand jury decision on Michael Brown's shooting, Ted Endo dynamites whatever crumb's left of the mythologised American dream.
Huck asks US police brutality experts if victims will ever get justice and what needs to change to end the violence.