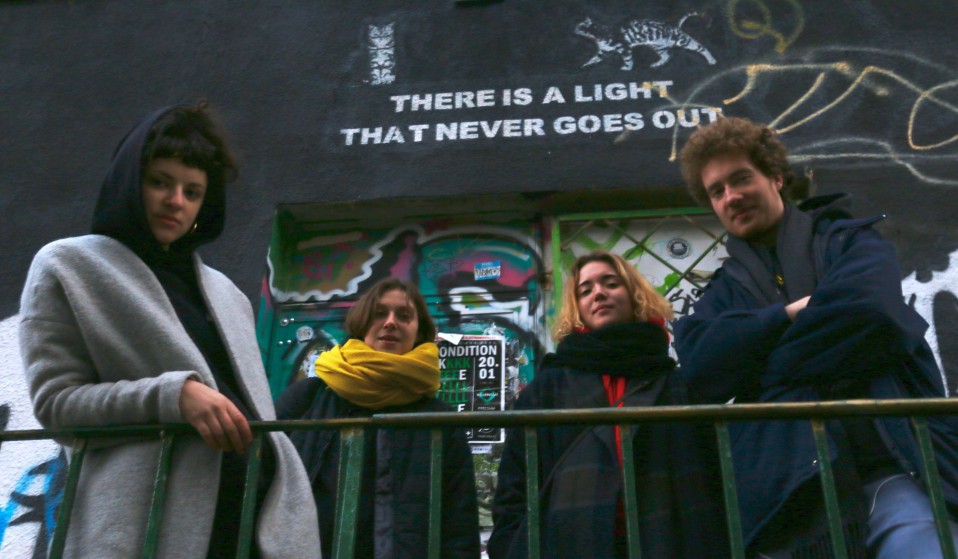 In a country with rising nationalism and some of the strictest abortion laws in Europe, the Polish youth are fighting back through grassroots initiatives and radical independent publishing.

In a country with rising nationalism and some of the strictest abortion laws in Europe, the Polish youth are fighting back through grassroots initiatives and radical independent publishing.

“It sometimes feels like the medieval ages here,” admits Ignacy Hryniewicz, who co-founded Synergia, a Warsaw-based collective that promotes social engagement, with his girlfriend Katarzyna Korytowska. His statement echoes a sense of frustration that a lot of Polish citizens have been feeling over the last few years. Since the Law and Justice right-wing party won the October 2015 elections, an increasing wave of nationalism and xenophobia has started to sweep away any hopes of progressive change in the country.

Poland is currently one of the only EU countries refusing to accept any refugees. It also has the strictest abortion laws (only permitted in cases of rape, incest, severe foetal abnormalities or the mother’s life being at risk). Plus, recent legislation passed in January, which threatened to jail anyone who suggests that Poland held some complicity in the Holocaust, has caused fears of increased anti-Semitism.

Still, restrictive policies have consistently been met with mass protests – often with effective results (the “black protest” of October 2016 is a notable example, as it forced MPs to U-turn on their initial proposal to fully ban abortion after 30,000 people took to the streets). But as protests continue to happen almost every week, like the recent march on International Woman’s Day that attracted more than 2,000 people, the country’s activists are looking for new ways to get their voices heard. 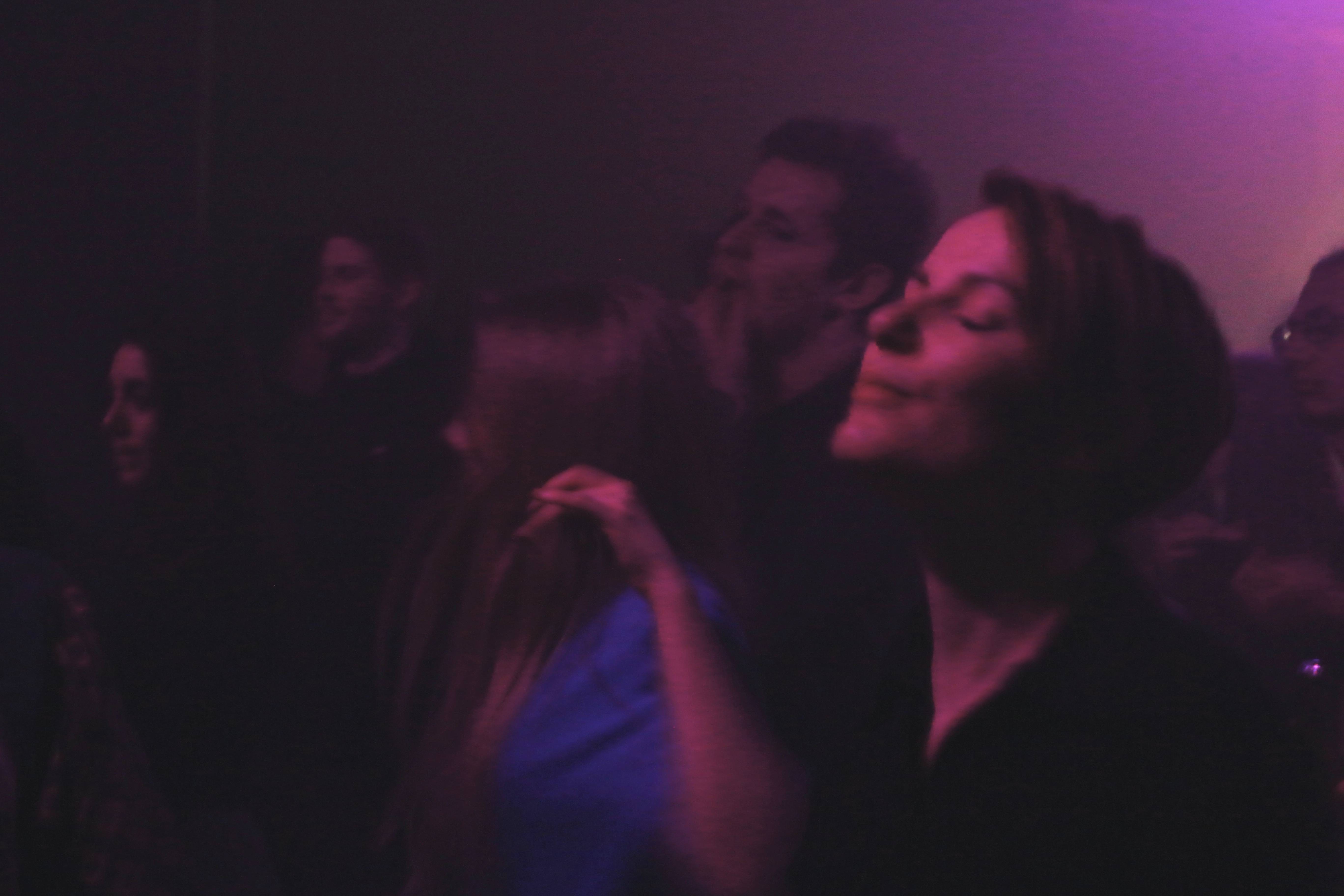 Dancers at the most recent Synergia fundraising party.

Synergia – which means “working together” in Greek – is one of many grassroots initiatives in Warsaw that were founded around the same time as the black protest. Along with collectives like Flauta and Girls to the Front, it is stepping forward to support groups neglected by the government.

According to Ignacy, Synergia was created to fulfil a “mission of sharing awareness and helping those in need, while using our passions of music, activism and cultural events.” Last week saw one of these fundraising events take place, as Synergia organised a party on Friday 9, a day after the Women’s March, themed “Music Therapy” which included a meditation session, an Indonesian Gamelan concert and a set by Hunee, the Berlin DJ gaining worldwide fame for his eclectic musical selection.

With more than 300 attendees in an intimate alternative venue Kommuna, the event was an occasion for Varsovians to relax and dance in a space free from discrimination. A significant 5,356zł (£1,121) was raised and donated to the Women’s Right Centre, which – according to the organisation’s founder Urszula Nowakowska – suddenly stopped receiving funding “after the present government came into power.”

Nowakowska explains that the centre is the largest NGO in Poland supporting women, receiving up to 150 calls per day from women in distress. However, like other human rights groups in the country,  it has fallen victim to a new law signed in September 2017 which saw the government give itself total control over the allocation of funding aimed towards NGOs, including significant annual funds by the EU and Norway.

Since then, the centre has been completely dependent on volunteers and donations, such as the one made by Synergia. Although these grassroots initiatives are only a start, Katarzyna affirms that “if more and more people use their resources and organise themselves, there will surely be hope for the country’s shift.” 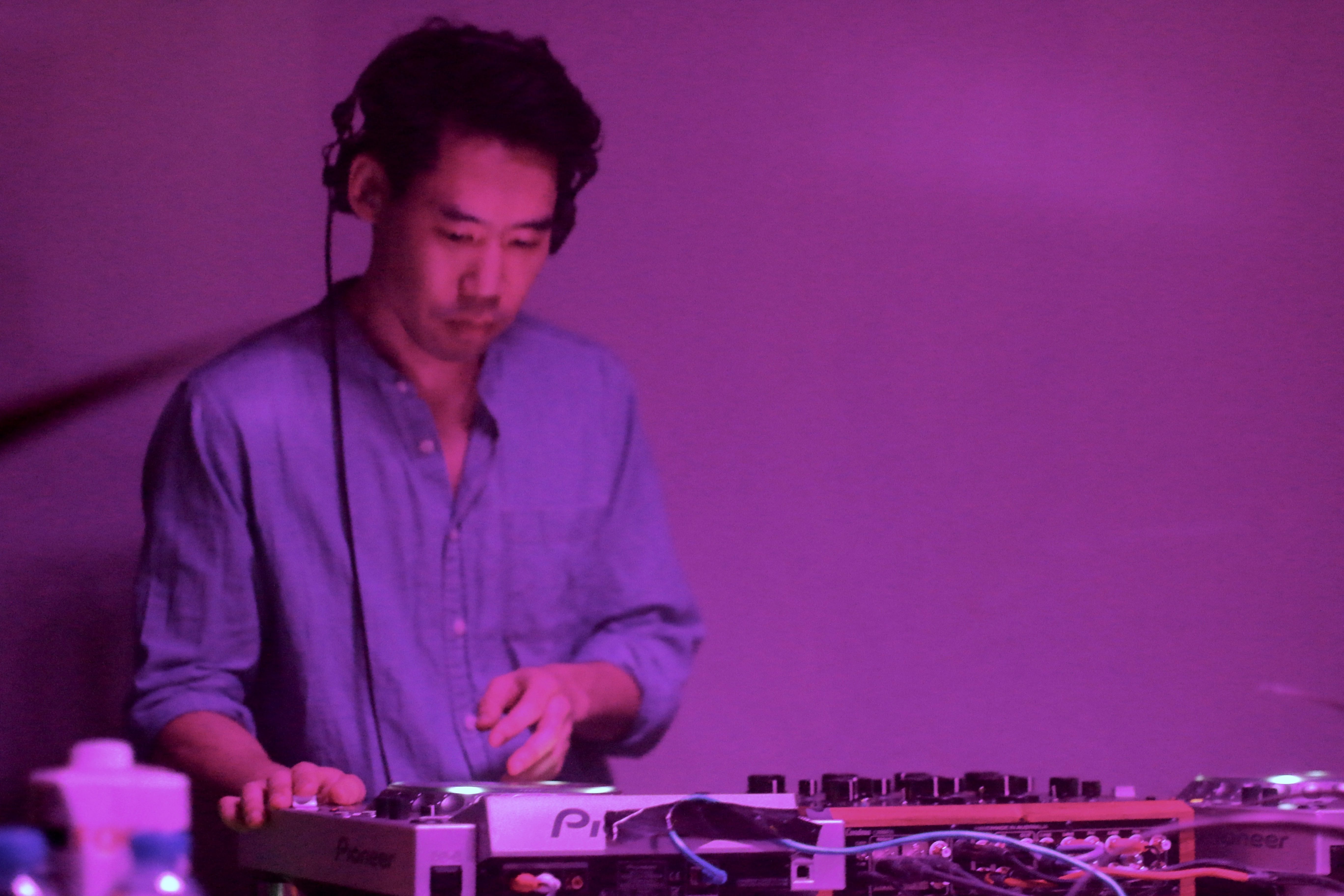 Hunee playing a DJ set at Synergia’s most recent fundraiser.

Katarzyna says that she has a sense of “responsibility as citizens to do good for the rights of minorities.” It’s a feeling shared by many other Varsovians who have teamed up in collectives. Flauta, whose members were present at the Synergia event, similarly organises fundraising parties, but sets all of them at the Przychodnia squat in downtown Warsaw to reinforce the DIY spirit of a grassroots initiative. The last event there raised 5,000zł (£1,046), distributed this time to support women and children refugees from Chechnya stuck in the city of Brest in Belarus, right by the Polish border.

“In Poland, in the last two or three years, there is a feeling of constant war,” confesses Tosia Ulatowska, one of the eight members of Flauta, while reflecting upon the human rights issues in her country. Founded in late 2016 when most of them were only 19, their initial ambition for Flauta was “to animate Warsaw’s cultural life” after their favourite clubs closed, but also simply “to help people.”

“We wanted to help refugees in some way, since our politicians weren’t,” Zofia Kofta, another member, explains. “I wanted to go volunteer abroad but I didn’t have time, so we decided to do it locally.” Regarding women’s rights, the female members recognise their privileged background yet remain adamant on showing solidarity: “We have money to go abroad if we need an abortion, but for other women it is still a horrible situation. Everyone is pissed off.” 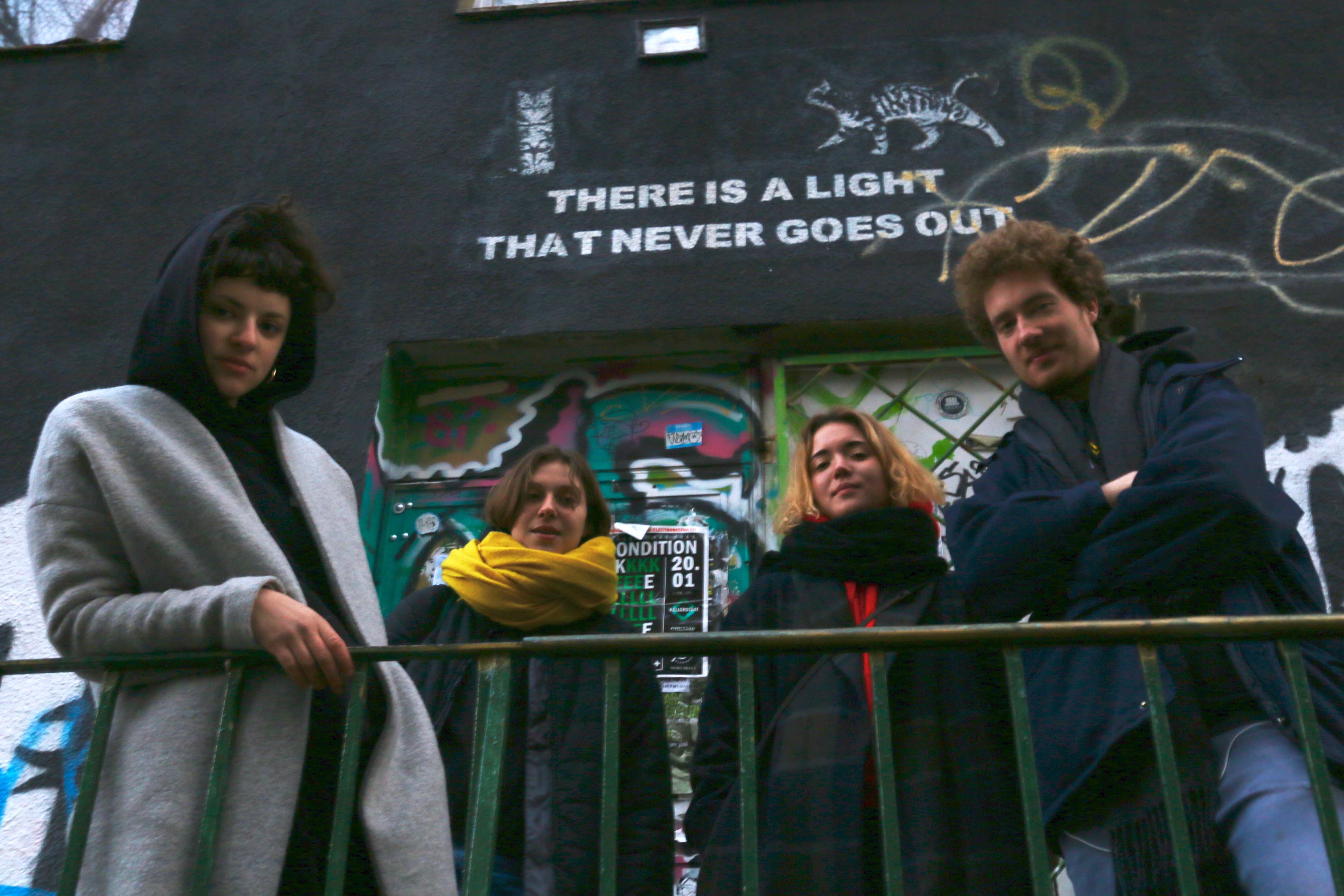 Four of the eight members of Flauta in front of the Przychodnia squat. From left to right: Zofia Kofta, Julia Niewiada, Tosia Ulatowska, Marek Tarnowski.

This sense of the Polish youth coming together in reaction to increasing xenophobia is mirrored by Ola Kamińska, who co-founded the collective Girls to the Front alongside Agata Wnu. “There’s a consciousness rising,” she asserts, confidently. Girls to the Front is the biggest independent printed zine in Poland devoted to women writers, and also organises gigs promoting female artists, with 18 events already to its name.

Although it started earlier than the other collectives, in January 2014, Girls to the Front has since grown extensively to accommodate an increasing number of women feeling alienated by the new government. “It was important to create a platform for girls to express their voices and encourage those who are never published,” Ola explains. A PhD student and teacher of Gender Studies herself, Ola is in the best position to recognise the importance of female empowerment, and says that she wanted the zine “to offer a space where women don’t get interrupted by men.” 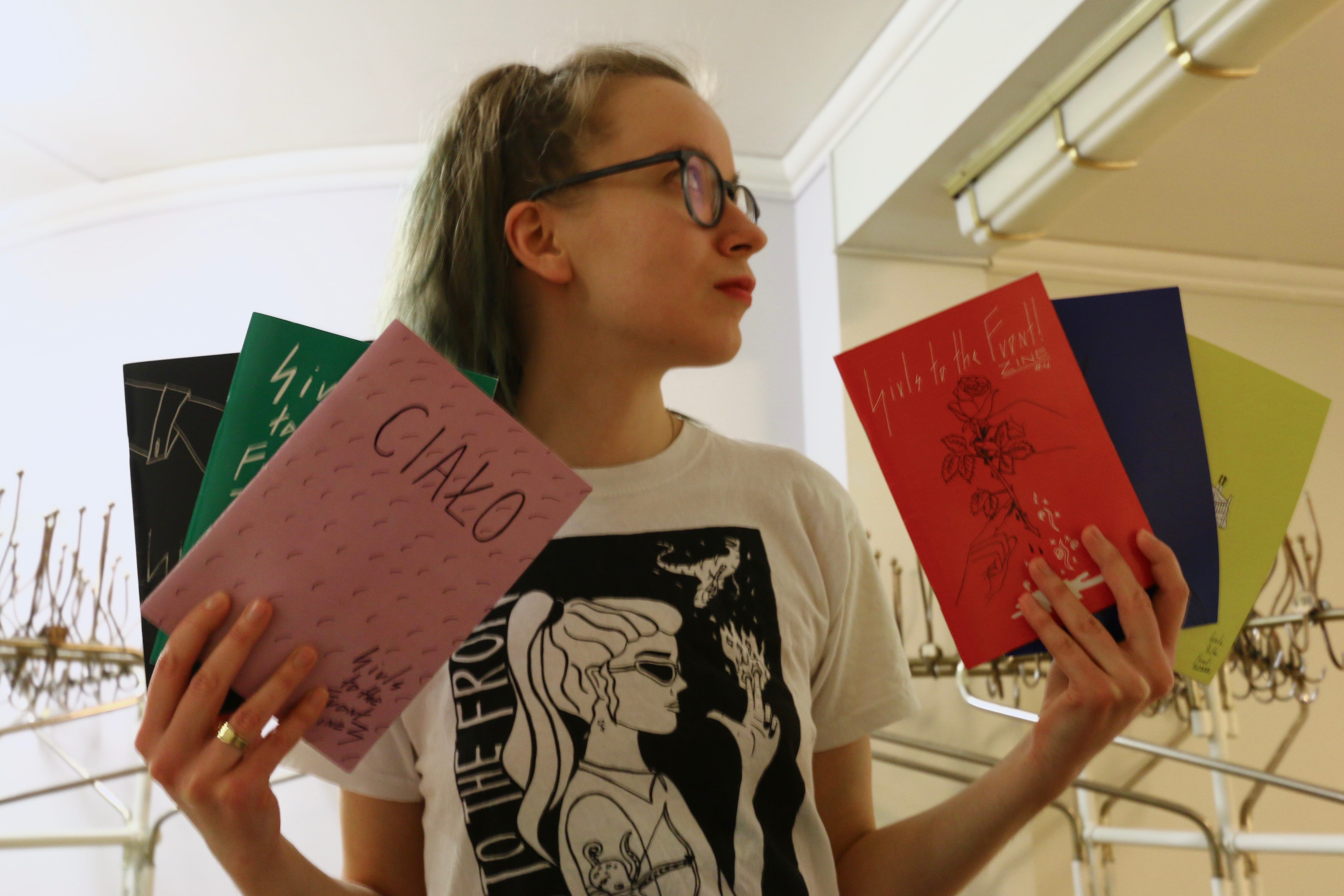 Ola Kamińska with the zine issues of Girls to the Front.

Taking its name from the Riot Grrl movement that fused feminism with punk rock, Girls to the Front channels this relentless energy in its projects. The fourth issue, Bonds between Women, responded to the “black protest,” and the seventh issue on Otherness related directly to new immigration policies.

With plans to expand events and send zines all over Poland, Ola has a message that rings out with the same sense of determination all these Warsaw collectives share: “To all the girls in Poland who feel different, we want to say: you don’t have to be anyone you don’t want to be.”

Linkedin
RELATED ARTICLES
OTHER ARTICLES
Birdy Chu reflects on documenting the historic moment in which the territory was formally passed back from the UK to China.
Financial turmoil is pushing people who work in the sex industry into more dangerous and desperate situations as a means of survival.
Rhiannon Adam spent three months capturing an ageing society wracked by division, isolation, and the aftermath of scandal.
Photographer David Corio’s archive offers a glimpse inside a revolutionary era of music and nightlife.
The two-day long event returned to London this year, showcasing a spectacular parade, steel bands and Caribbean food.
The idea that a younger generation is abandoning work has become a popular narrative online, but it doesn’t necessarily reflect reality.