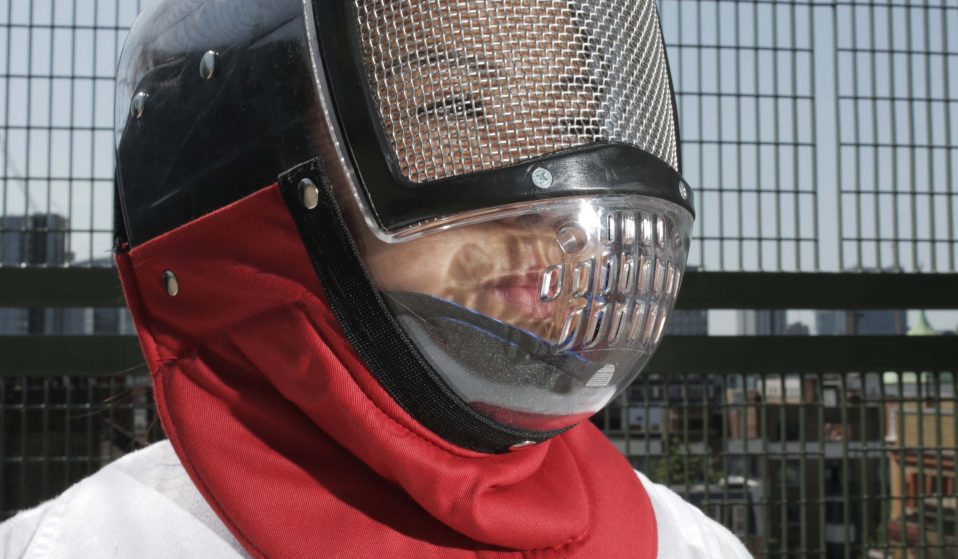 The sport – which has long been associated with the rich, white, and privately-educated – is now being embraced by young British Muslim women. Writer Niloufar Haidari finds out why.

The sport – which has long been associated with the rich, white, and privately-educated – is now being embraced by young British Muslim women. Writer Niloufar Haidari finds out why.

It’s a sunny summer afternoon in East London, and I’m in the rooftop gym at Wapping High School watching a group of 11-14-year-old girls fence. The group, known as ‘Muslim Girls Fence,’ is being instructed by International fencer and coach Lucy Johnson.

The image is an unusual one in an inner-city school. Fencing has long been the preserve of the rich, white, and privately-educated – a stereotype that both the people behind the project and the students themselves are very aware of. When I ask the girls what their conceptions of fencing were before they starting practising, their answers range from “men” to “French people.”

Muslim Girls Fence was set up as by Maslaha and British Fencing in an attempt to both diversify the image of fencing as a sport in Britain, and to raise aspirations among young Muslim women. 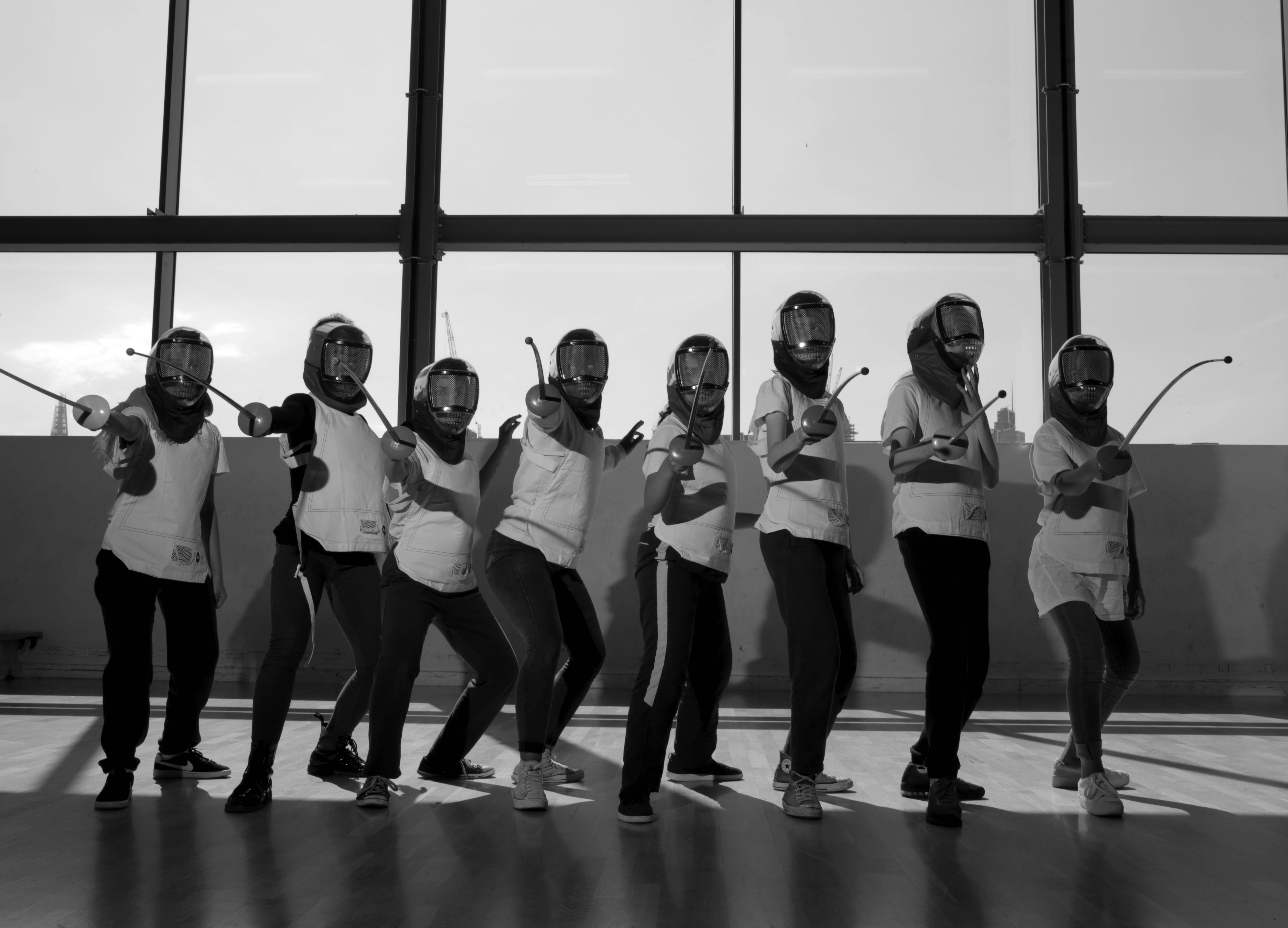 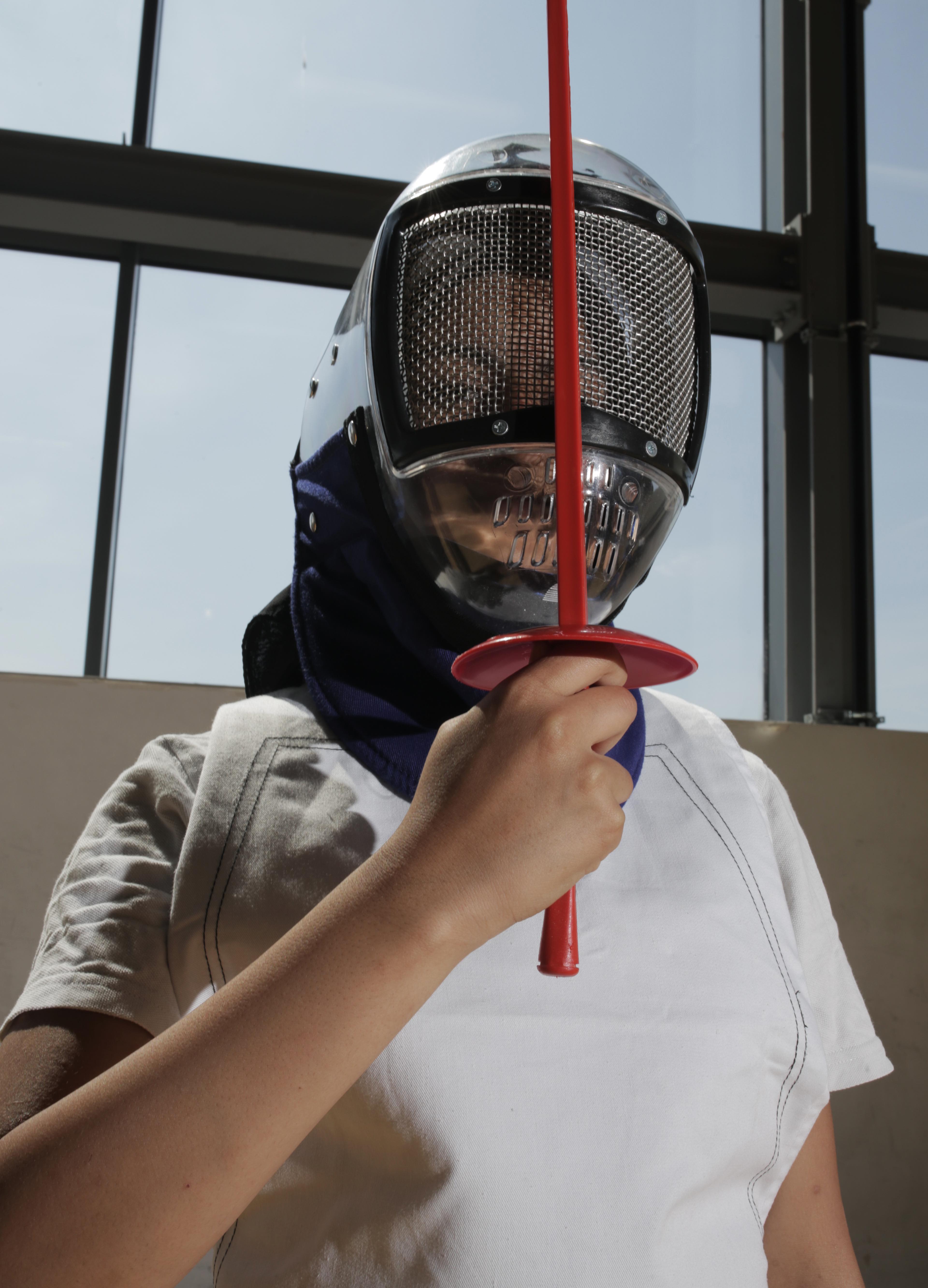 Muslim women face complex discrimination in terms of both faith and gender, with 58 per cent of reported cases of Islamophobic discrimination in the UK concerning women. This is particularly true in terms of racially-motivated attacks: Muslim women are more visible in their faith and also seen as easier targets. “Counter-radicalisation” strategies put in place by the government have done nothing to help, with policies such as Prevent only serving to further stigmatise and alienate an already-discriminated group from their peers.

To this end, the project looks to tackle misconceptions that surround Muslim girls, and provide them with a different narrative about their future and skills to tackle the challenges they face, both now and in the future. 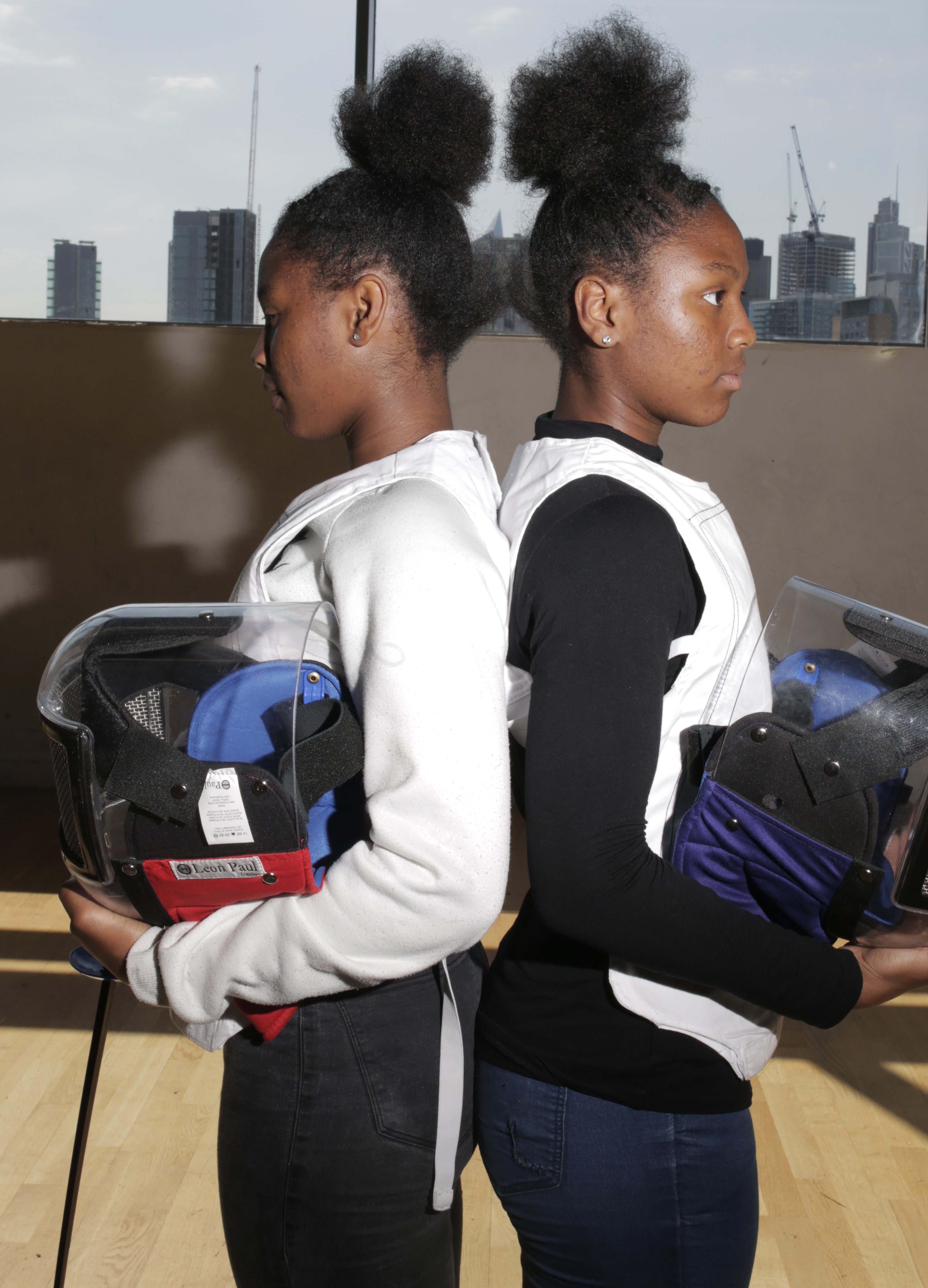 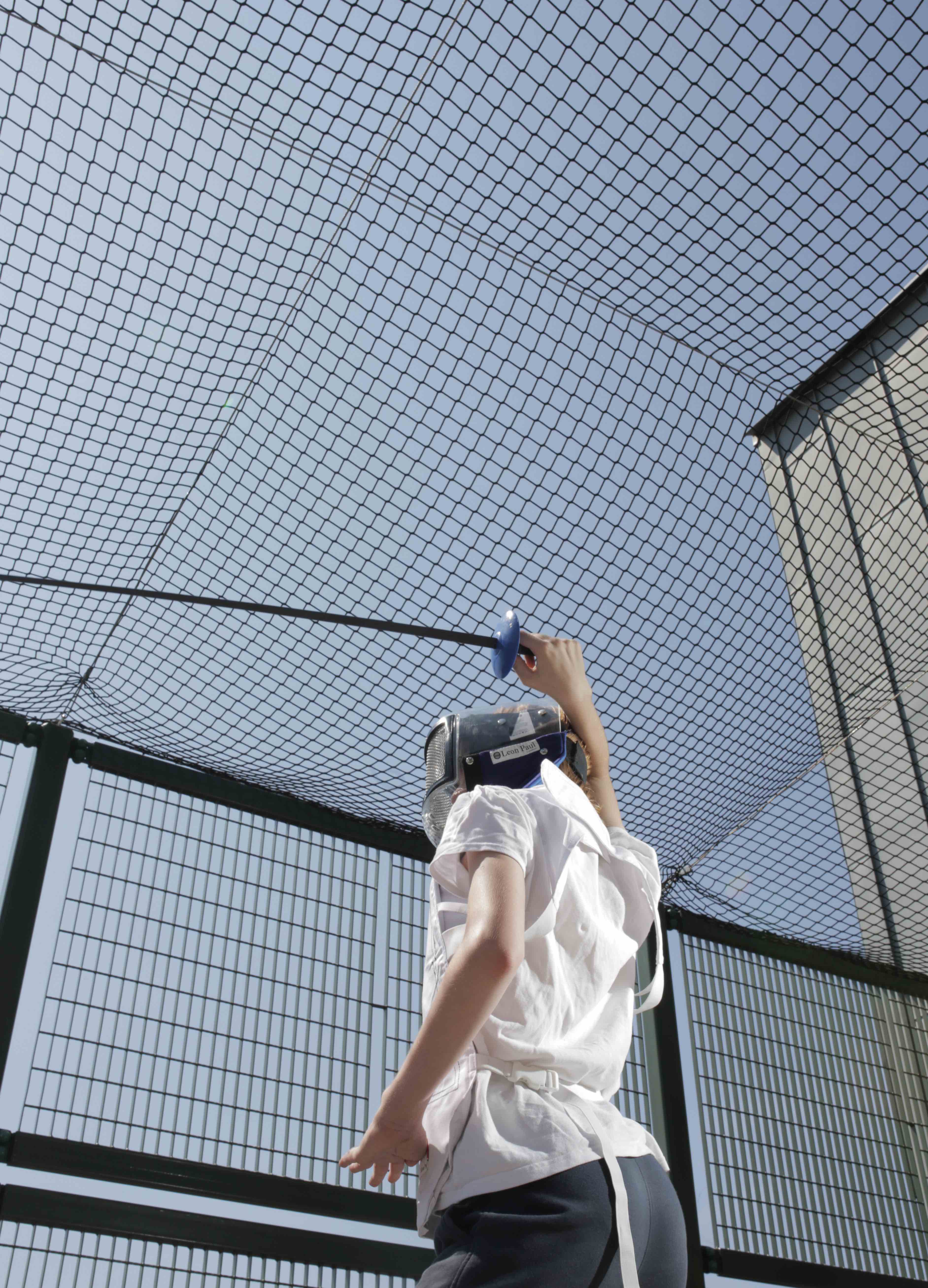 Logistically, the workshops last for 10 weeks, and spaces are limited. Project co-ordinators Alaa Alsaraji and Amena Amer are keen to keep groups small in order to be able to create a trusted circle, and give every girl “a chance to be heard and not fall through the cracks when they normally might do in their other lessons.”

Although the project is open to everyone, they aim for at least half of the girls to be Muslim. “This is something that we don’t shy away from as an organisation and as a project”, says Amena. “There is a lot of emphasis on experiences of Muslim women and girls in particular, but we also try and incorporate other broader issues, because a lot of things that Muslim women face aren’t specific to Muslim women. They have a range of other identities and experiences that overlap with many other communities, so we try to emphasise that as well.” 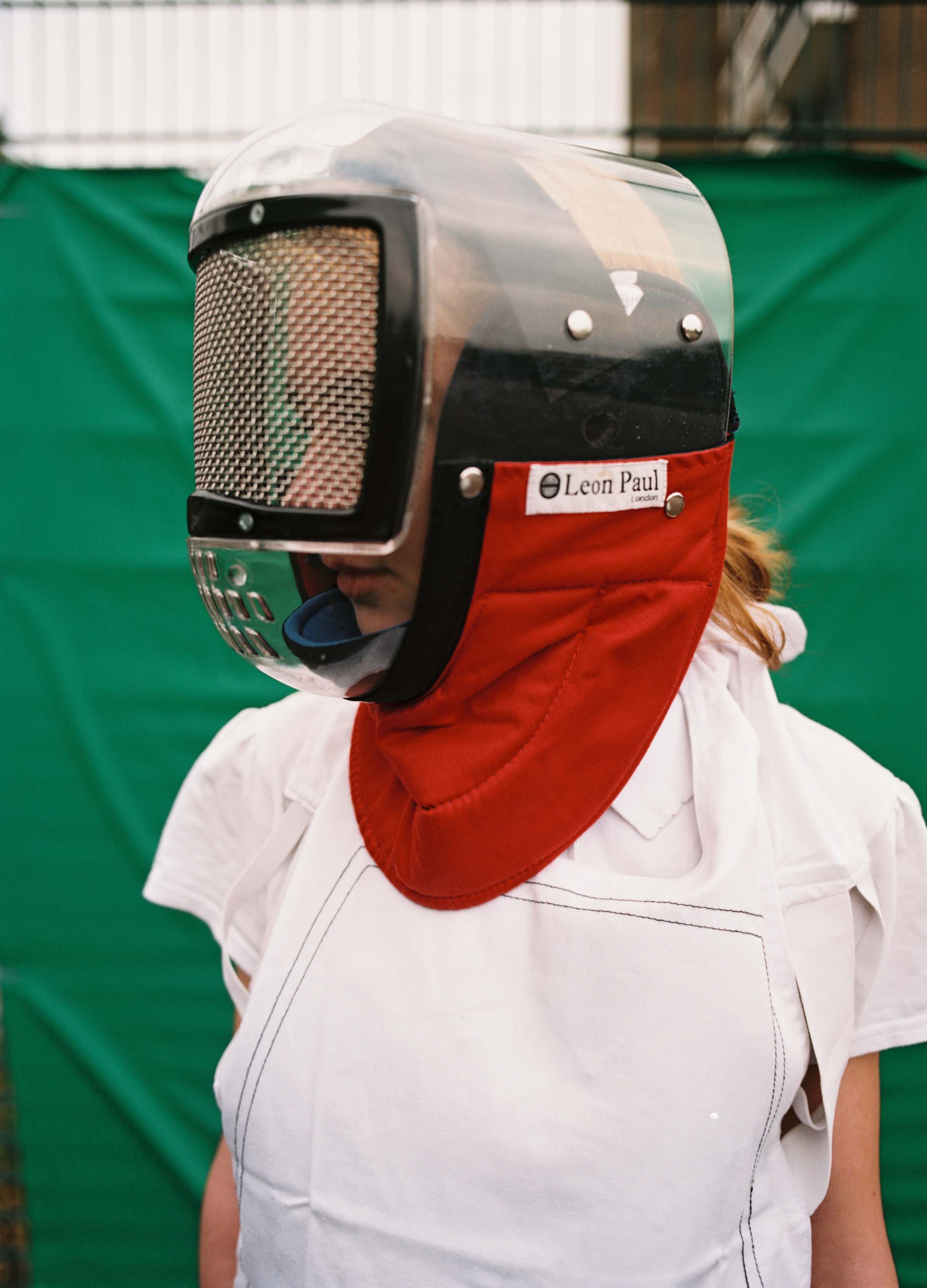 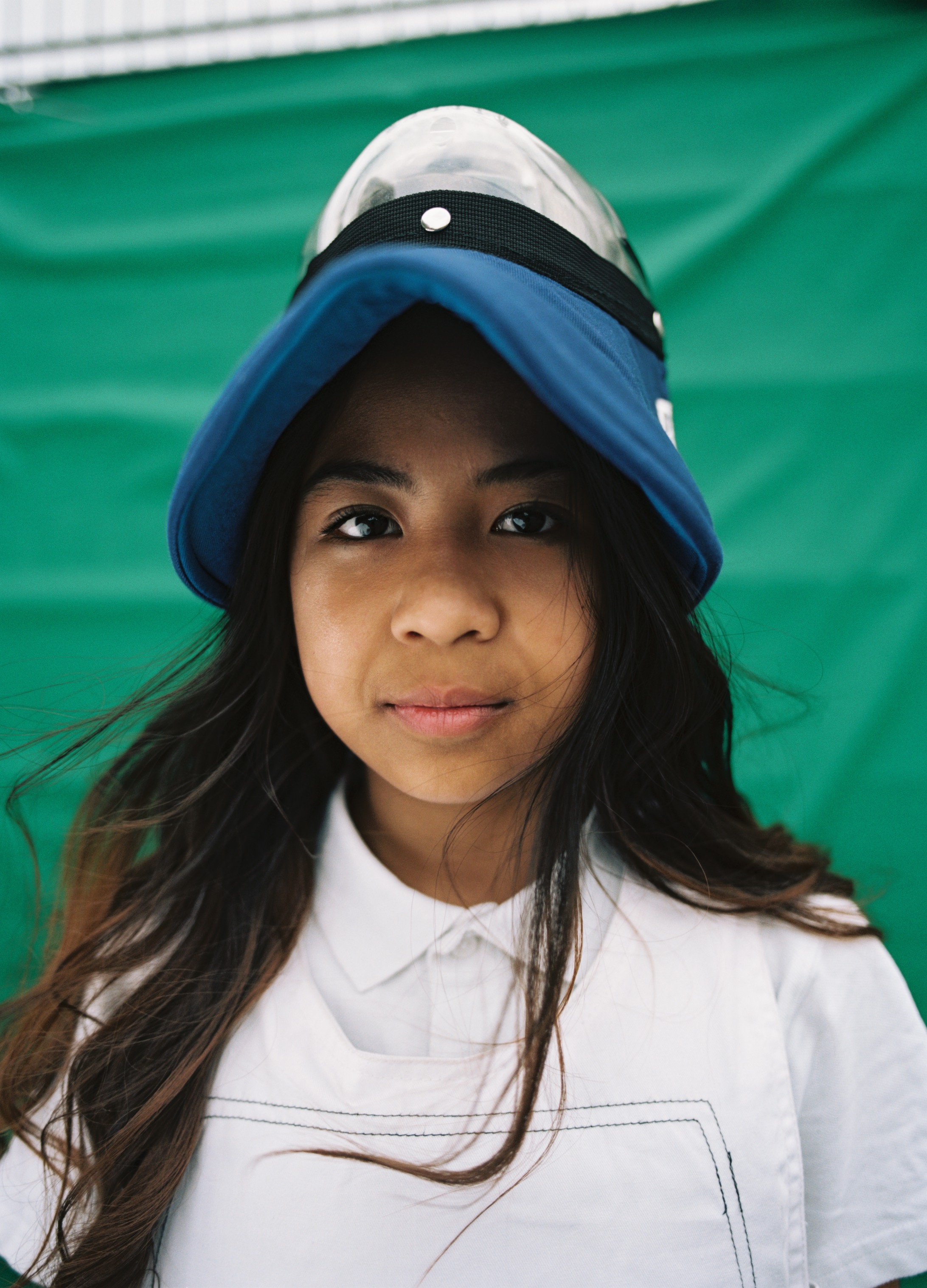 The participation of non-Muslim girls helps to break down harmful misconceptions around being Muslim, something that can only be positive in our increasingly multicultural but fractured world. The benefit is not just limited to the girls who take part either, and Alaa is vocal about the advantages the project has for teachers and schools as a whole. “[Muslim Girls Fence helps] to cultivate an environment where these things can be discussed that they might not necessarily be able to provide because of time constraints,” she says. “They’ve definitely said it’s a positive thing”.

Each session lasts two hours: the first hour is led by Alaa and Amena, and involves workshops, crafts, and discussion. When I visit, it is the final session, and the girls are reflecting on what they have learned over the past 10 weeks. In the previous session, they learned about the Suffragettes and used Risograph printing – a form of low budget printing historically used by activists – to print their own postcards, featuring photos of themselves fencing. 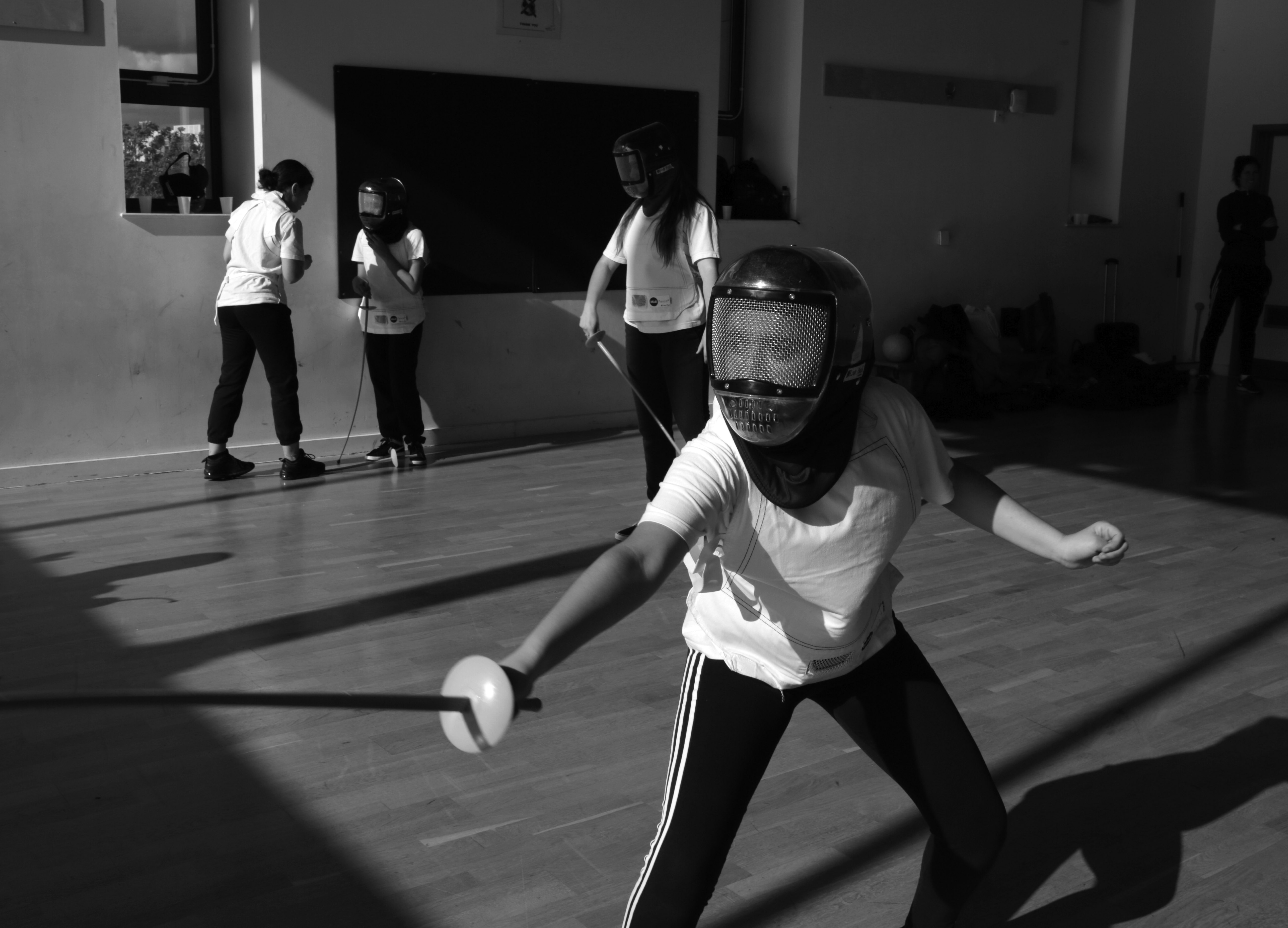 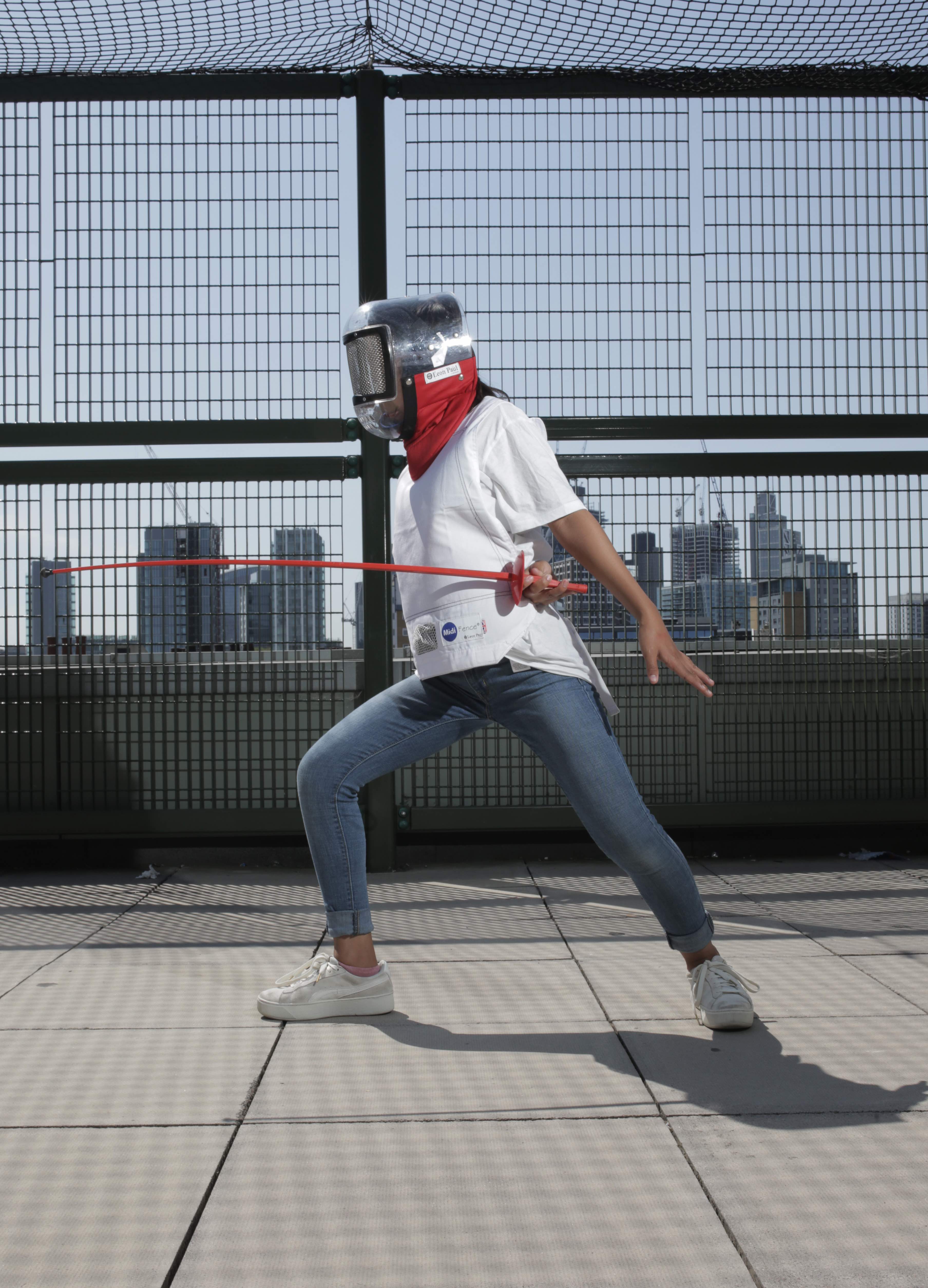 Fencing may seem like a strange choice of sport, but it is in many ways uniquely suited to the aims of the project. The sport is uniquely accommodating for Muslim women: firstly, due to its lack of physical bodily contact, and secondly the fact that the uniform is hijab-friendly. US international fencer Ibtihaj Muhammad has also touched on the fact, saying that with fencing she could wear the same kit as everyone else for the first time, meaning that she “truly felt like part of the team.”

The sport also links in well to the topics discussed in the workshops and the project as a whole. “How often do inner-city schools offer fencing as an option?” asks Amena. “It’s about your brain working as well as the movements that you have to make because you have to think and observe and predict, so it’s quite an intelligent sport.” 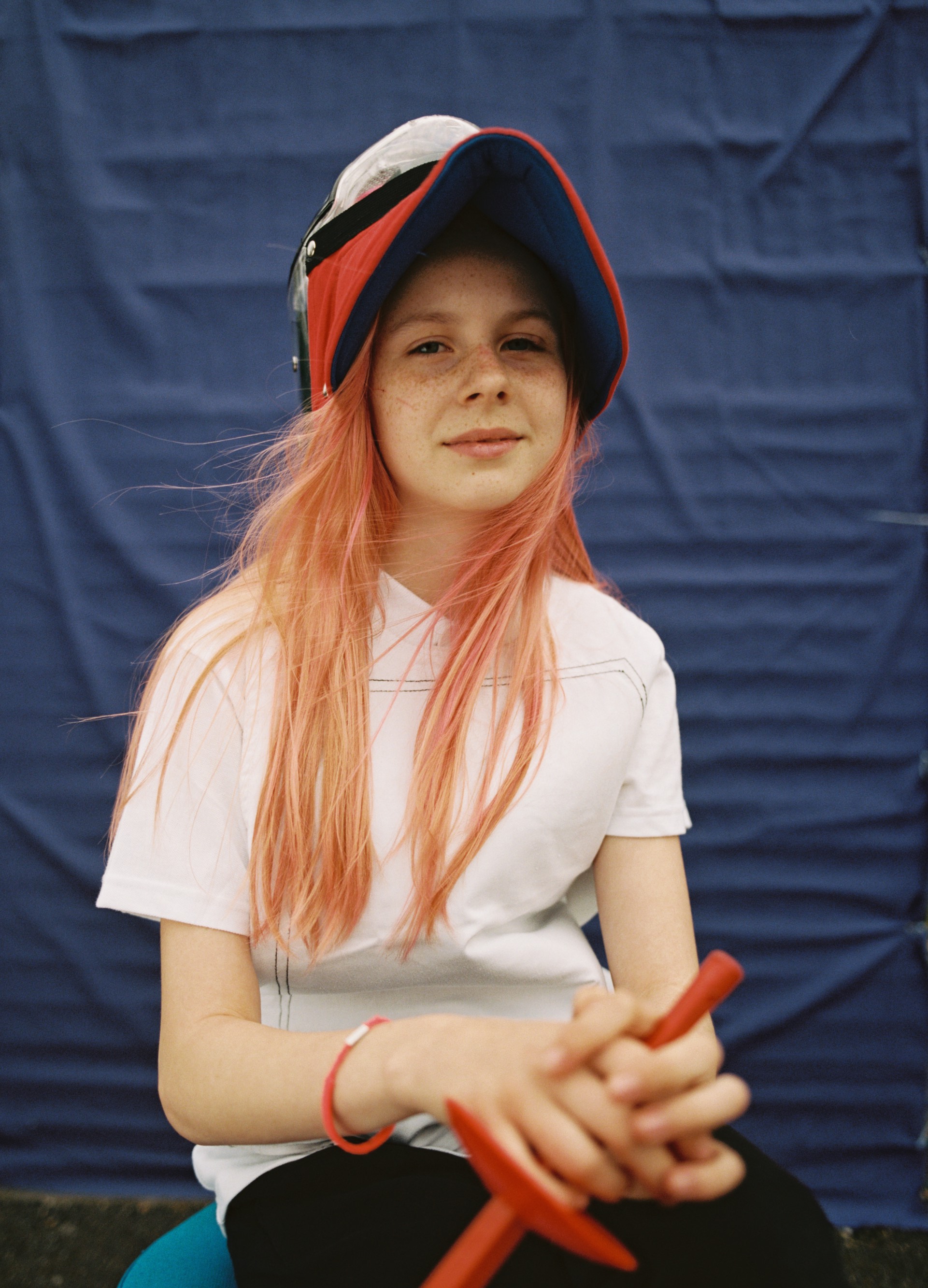 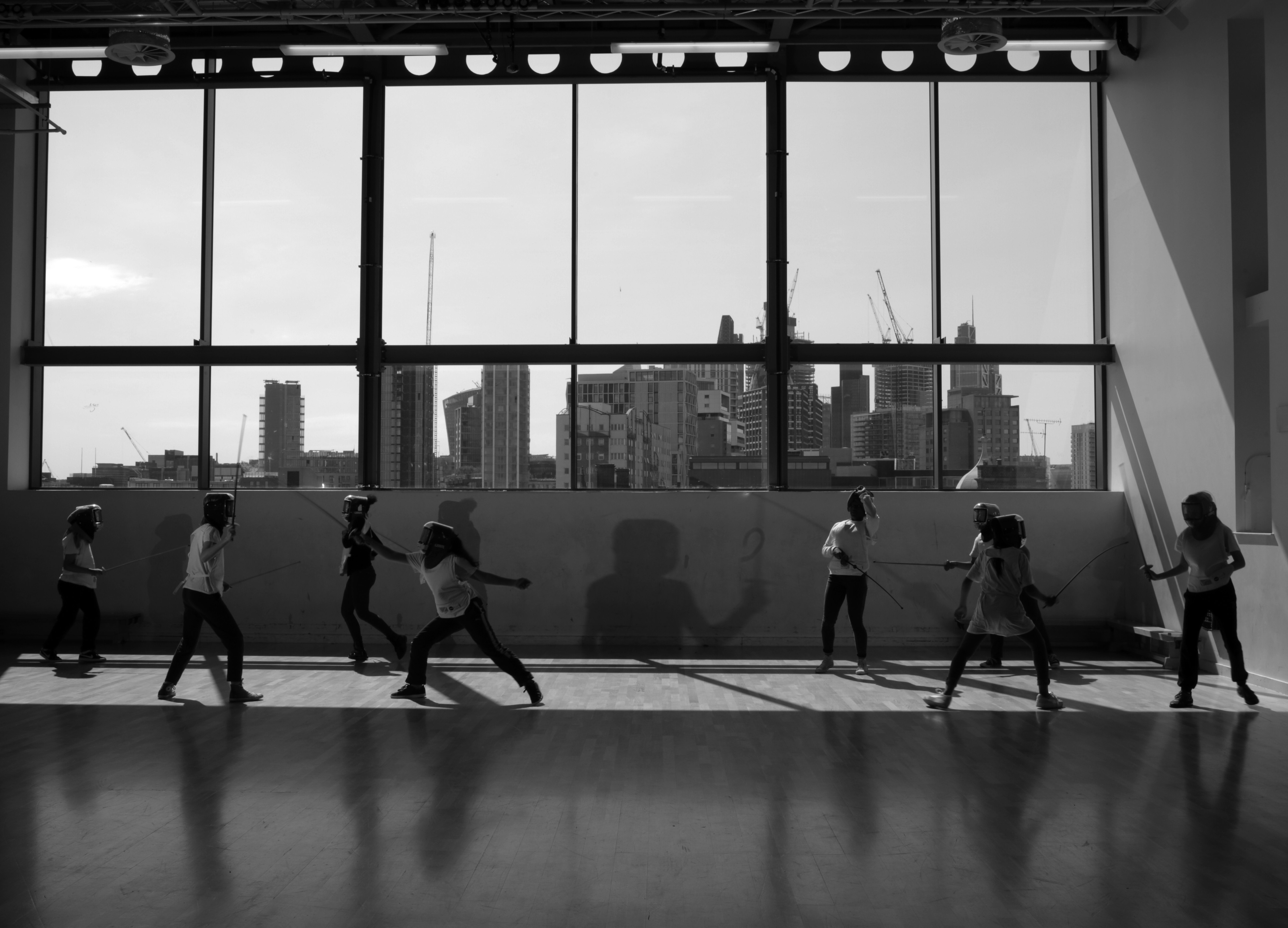 “A lot of the girls have made a parallel between the ‘lunge’ and the way they like to confront stereotypes or negative narratives around them as young girls: you step forward and aim in a strong pose as a challenge. It’s a powerful, strong pose, and if you take that into building confidence and challenging people even on a talking level, it all fits in really well.”

This idea is echoed by fencing instructor Lucy: “It’s not just about fencing here. I teach a lot of kids where it’s all about technique and winning competitions, but this is about finding yourself and your style. It’s about turning around and challenging someone on their opinion. I’m a great believer in fighting for what you believe in and this is a literal fight for what you believe in!” 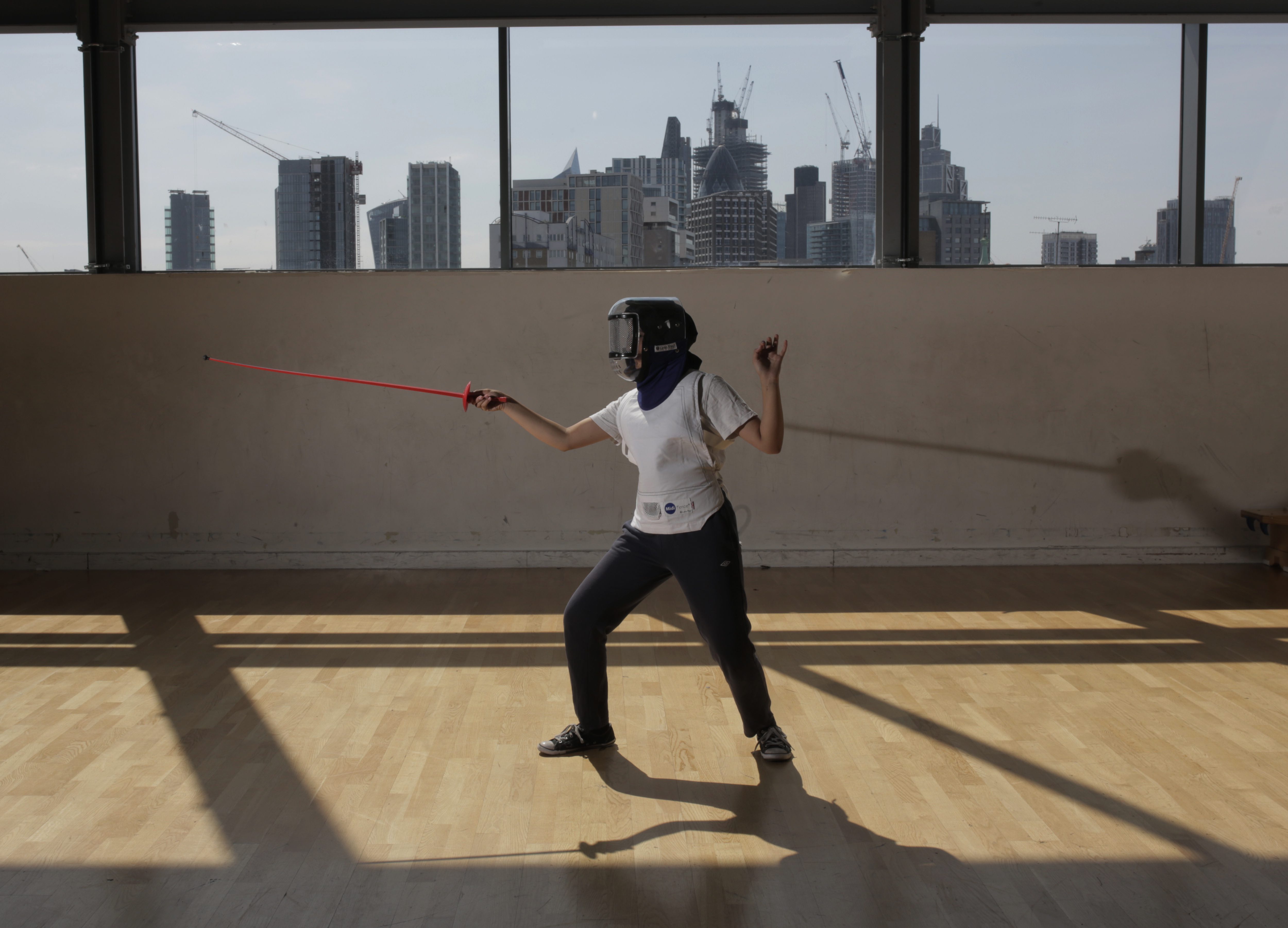 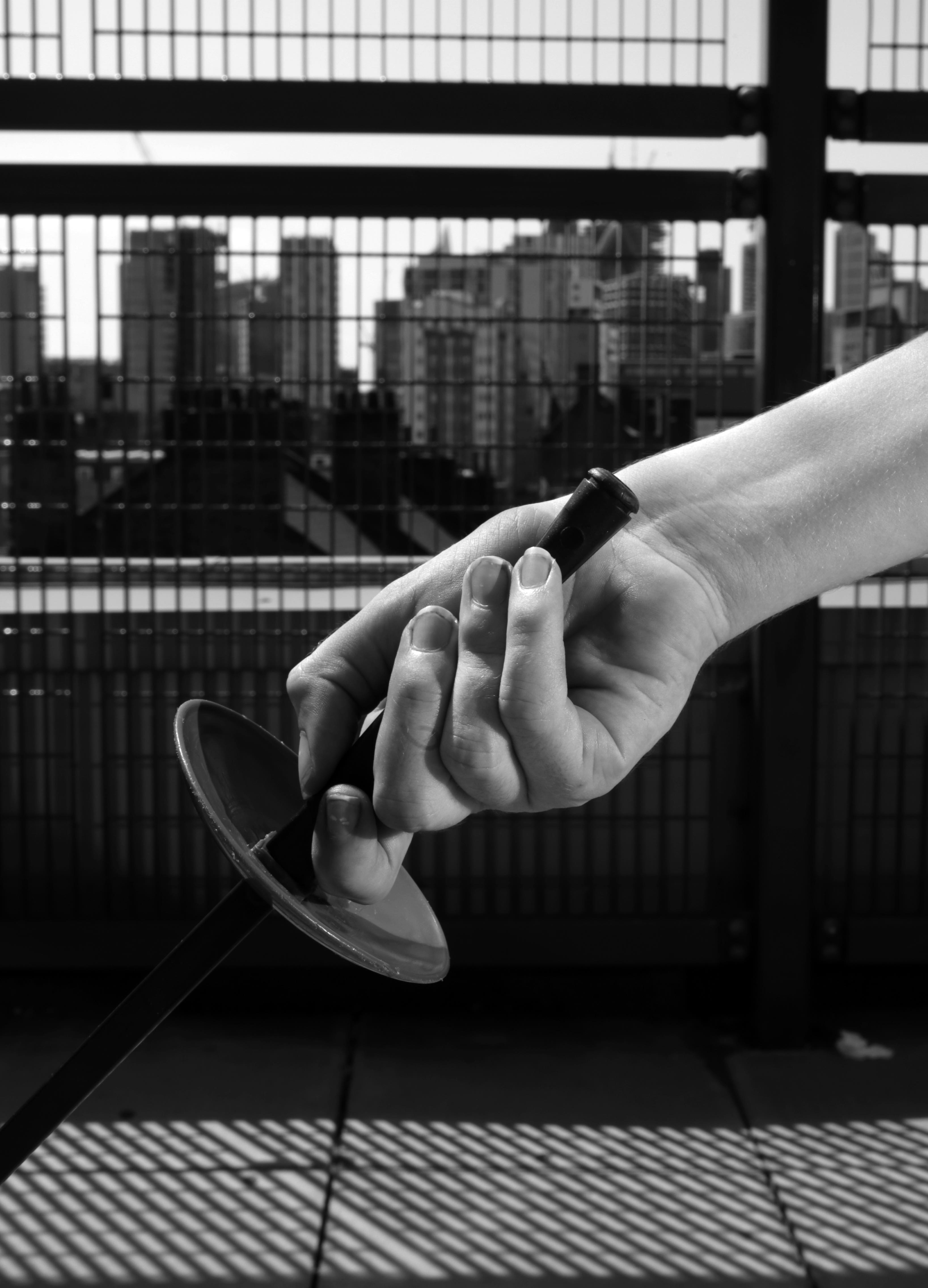 In terms of what they hope to achieve with the two project, Alaa believes the aims are two-fold: one is for the girls taking part to have something like a safe space where they can discuss issues they’re not necessarily pushed to think about otherwise, and the other is to present a different image of Muslim girls to the wider community.

“The stereotype of Muslim girls being oppressed and weak is hard to uphold when you see somebody coming at you with a sword!” she says, with a laugh.

It’s hard to argue with her, sword or no. 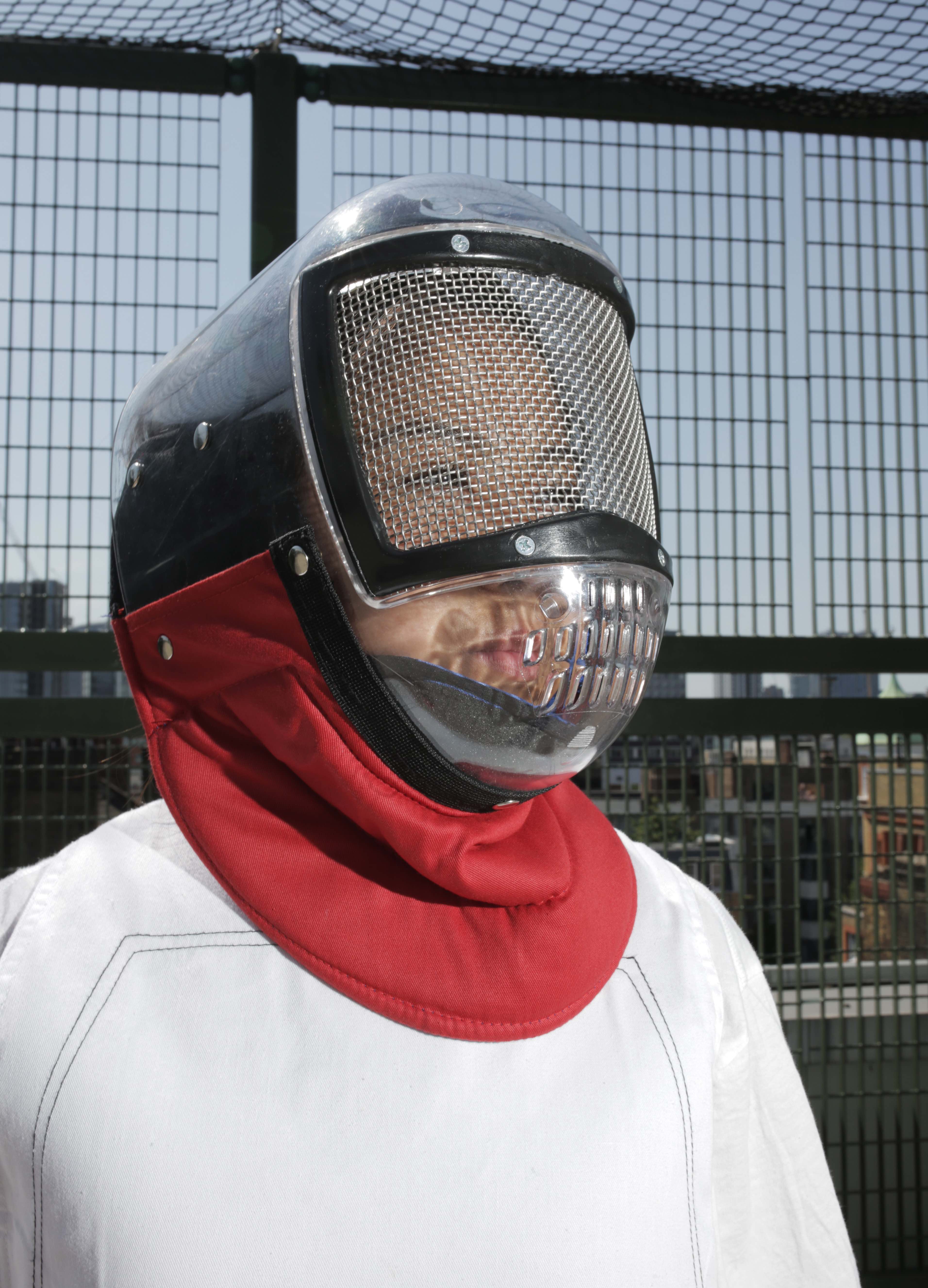 Learn more about Muslim Girls Fence on their official website.

Linkedin
RELATED ARTICLES
OTHER ARTICLES
After building his reputation covering the US civil rights movement in the 1960s, the photographer went on to produce some of the most enduring images of the past century.
The first-generation graffiti artist reflects on the tagging’s emergence as an art form and the players who pushed the medium forward.
A new podcast is opening up the conversation between trans women and trans amorous men in the hope of building coalitions.
A new film from Berghaus traces the story of Adam Raja, who left behind a turbulent upbringing to discover the healing power of climbing.
Campaigners reflect on what the supreme court’s decision to allow buffer zones in NI means for the future of reproductive rights in the UK.
From snake handlers to mardi-gras revellers, Tom “TBow” Bowden’s photos provide a snapshot of the wonderful and weird people who make up America.