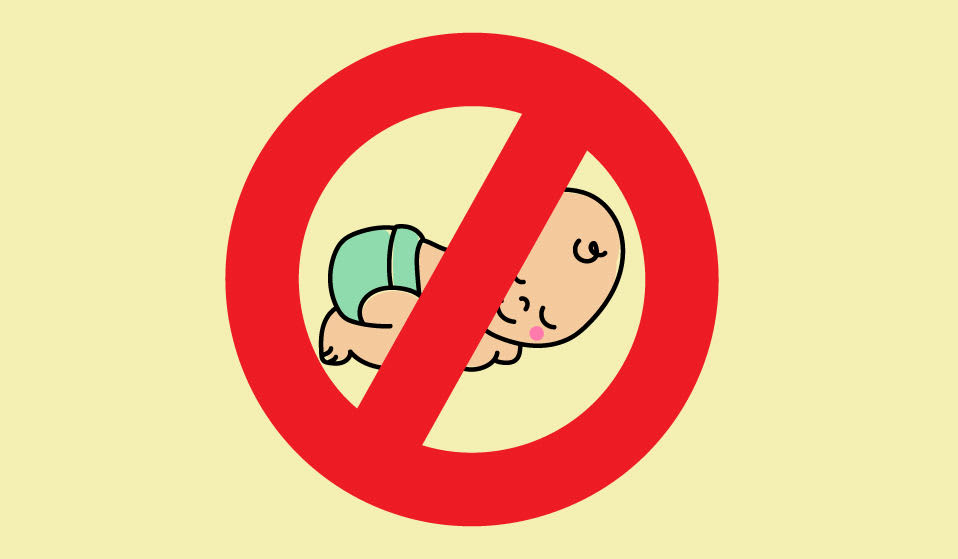 With more and more people concerned about the earth‘s future, many are flocking to a once-niche ideology that argues for universal childlessness.

With more and more people concerned about the earth‘s future, many are flocking to a once-niche ideology that argues for universal childlessness.

“Is anyone here sceptical that humans will ever voluntarily go extinct?”

This is a question posted in one of Facebook’s many antinatalist groups. Above it on the feed is a video of human waste being dumped into a river, and below, a quote from Sophocles on the horrors of human consciousness.

It’s a dark place – but also one that is becoming increasingly popular. Since the news emerged that the best thing you can do to reduce your carbon footprint is not procreate, debates around childbirth have amplified. Now, with more and more people concerned about the earth‘s future, many are flocking to a once-niche ideology that argues for universal childlessness.

Traditional antinatalism has been traced back to Ancient Greece, but the term is thought to have first been used by a Belgian philosopher, Théophile de Giraud, and made famous by academic David Benatar in his book Better Never to Have Been: The Harm of Coming into Existence. Giraud and Benatar, who both published their antinatalist works in 2006, fixate on the suffering inherent in human existence. They believe that to have a child is to impose on it difficulty and death, and that childbirth is therefore morally indefensible.

Social media has provided the perfect platform for helping to spread this message. The most popular antinatalist group on Facebook (whose name can’t be given due to risk of being closed down, or ‘zucced’) has around 7,000 members. On Reddit, r/antinatalism boasts 46,000 and counting.

Some of the movement’s new converts buy into Benatar’s traditional gloom. R/antinatalism is full of content like this (an example from someone known as @Voidp0ster: “From the moment we are ripped from the womb and thrust into existence we owe a debt paid only in suffering”). Other members hone in on environmentalism instead – one image doing the rounds on Facebook showed a circle of wildlife accompanied by the slogan “save the Earth, don’t give birth”. 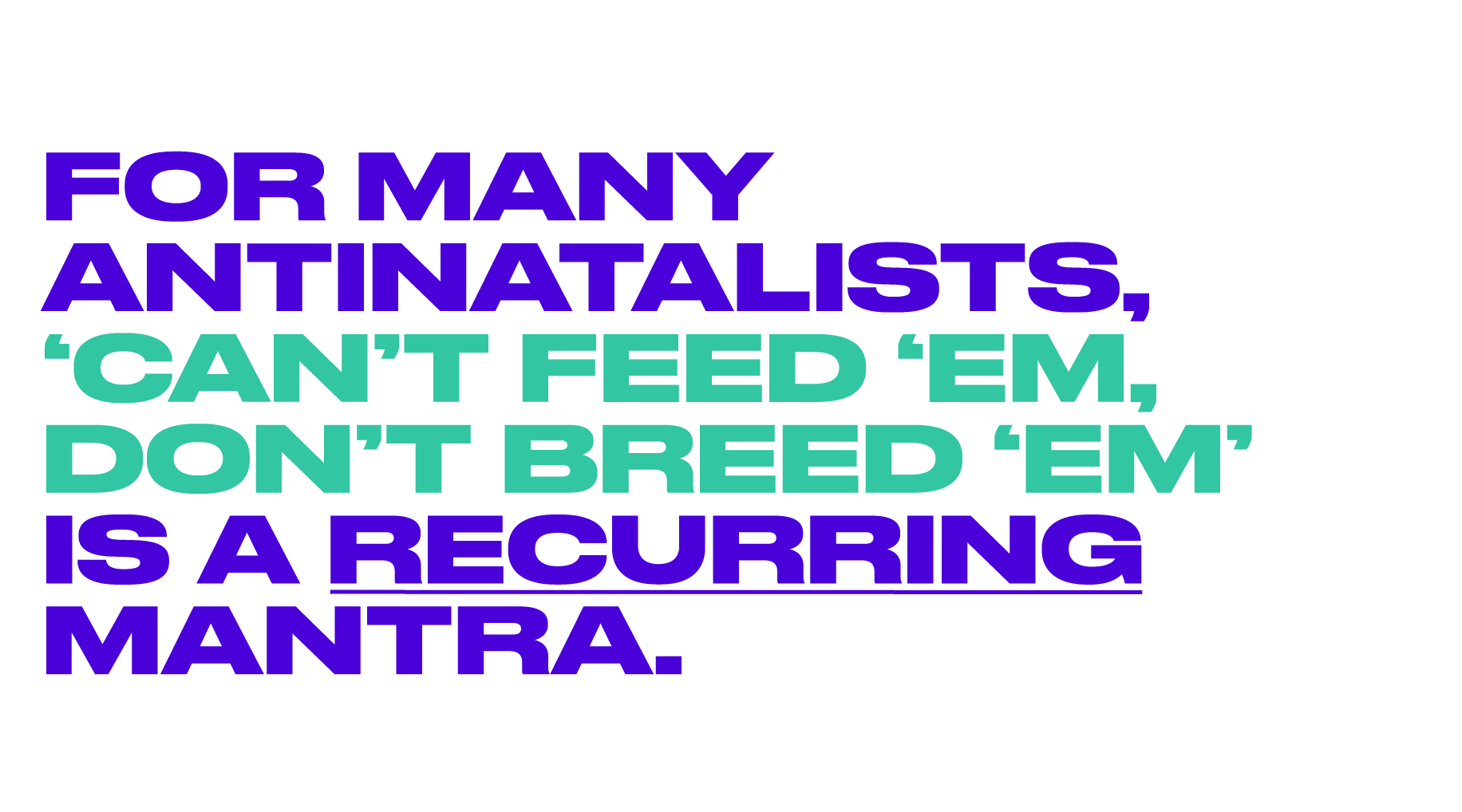 For Facebook antinatalists, the nature of their platform means that pregnancy announcements or baby photos are readily available for collective scorn. In one particular group, philosophy and ecology have been replaced by a sociological perspective. Members are heavily critical of the ‘pro-natalism’ inherent in human society, believing that parents (or, more commonly, ‘breeders’) receive a societal privilege over the child-free. Screenshots are regularly shared of parents expecting discounts or queue-jumps purely for the virtue of having children. One picture recently posted showed a restaurant bill on which the customer had written “Sorry, no tip, Christmas is coming with three kids” and drawn a little smiley face.

Scrolling through this page, it would be easy to think that antinatalism is an intellectualised term for people who just don’t like kids. But beneath the layer of salt, critiques can be heartfelt and occasionally illuminating.

On one post about a local buy-and-sell group being co-opted by mothers, a member pointed out that for those with certain histories or conditions, constant bombardment with child content can be traumatic. Others have predicted that the trend for parents posting ‘funny’ baby content will have negative consequences for the social lives and mental health of the children involved. Irrespective of personal views on the ethics of procreation, it’s impossible to unsee how overrun with ‘pro-natalism’ our public platforms are.

But it’s not all enlightenment. One of the pitfalls of these circles is the tendency of discourse to slip into political no-go zones without anyone seeming to notice or care. Pictures often appear of babies with genetic illnesses or disabilities, and the group’s comments invariably revolve around the “cruelty” of the adults who passed on those traits. Others rage at screenshots of parents-to-be asking for financial support: “can’t feed ‘em, don’t breed ‘em” is a recurring mantra. 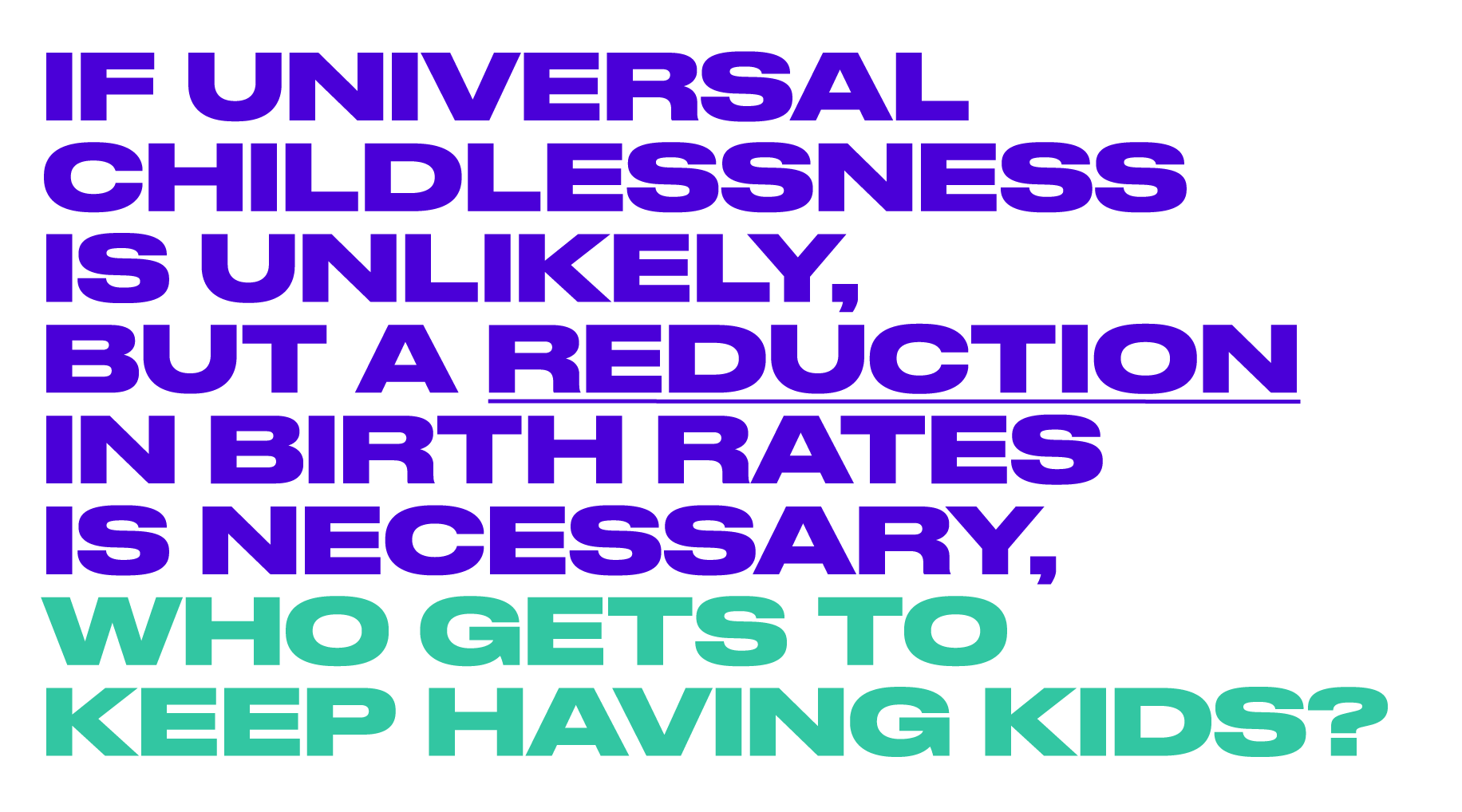 While comments like these seem like a logical extension of the antinatalist creed (if existence is already a struggle for the able-bodied and financially stable, bringing into the world someone for whom life will be more challenging must be even more of an offence), the implication is that rich, neurotypical and able-bodied people have more of a right to procreate than others. In this, those who adopt the antinatalist banner risk drawing connections between their movement and ideas about eugenics and social cleansing. It’s perhaps not surprising that the vast majority of members in these groups are white.

This is one of the central issues of modern antinatalism: if, as most accept, universal childlessness is unlikely, but a reduction in birth rates is necessary, who gets to keep having kids?

Tensions like these are predictable growing pains in a movement that grinds so hard against normal thought patterns. Daniel*, an admin for one of Facebook’s antinatalist groups, tells me disagreements are common.

“[There are rifts] between the philanthropic and the misanthropic, over whether antinatalism includes non-human animals or not, and whether to do ‘activism’ or not,” he says. “There are also consequential ethics versus deontological ethics, and views on death being good or bad.”

A lack of cohesion could be the reason that the movement is struggling to shrug off its characterisation as a theoretical curiosity rather than a viable belief-system. “Any person who expresses antinatalist views in public tends to be met with hostility or confusion,” Daniel says. “The typical knee-jerk reaction is the reply ‘why don’t you kill yourself?’” – a question to which different branches of the movement would have different responses.

Daniel thinks it’s unlikely that a majority of people will ever subscribe to antinatalism: “I’m sure most people on the street still have no clue what antinatalism is,” he says. But bigger waves of people join his group each time the philosophy pops up on VICE or the BBC, which, because of its initial strangeness and the worsening climate crisis, is becoming fairly often.

In 2018, an academic at the University of Oxford claimed that falling fertility rates should be received positively, and in February a man in India brought a lawsuit against his parents for having him. However counter-intuitive it may seem, antinatalist activity is moving beyond the computer screen and the philosophy textbook. Daniel might be pessimistic, but it’s still early days. And, as the climate crisis worsens, it’s hard to see how a belief-system based on the assumption that humans are bad can do anything but flourish.

Linkedin
RELATED ARTICLES
OTHER ARTICLES
Birdy Chu reflects on documenting the historic moment in which the territory was formally passed back from the UK to China.
Cindy Campbell recounts how her brother ushered in a new era of musical culture at a party she held in the Bronx in ‘70s.
Following the announcement of an 80% hike in the energy price cap from 1st October, crowds gathered outside the offices of energy regulator Ofgem to protest and declare their intention to undertake a payment strike.
By turning a real-life crisis into daytime television fodder, TV bosses have once again shown themselves to be completely out of touch with audiences.
A new project is documenting formerly incarcerated people as they transition back into civilian life.
For over a decade, gamblers have won big by employing people to place live bets from the court. But does this dubious method still work?