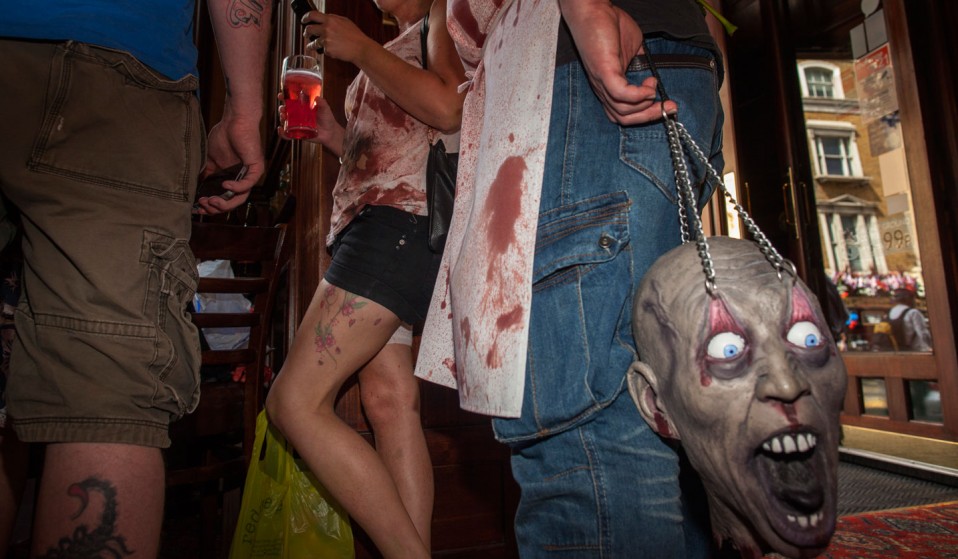 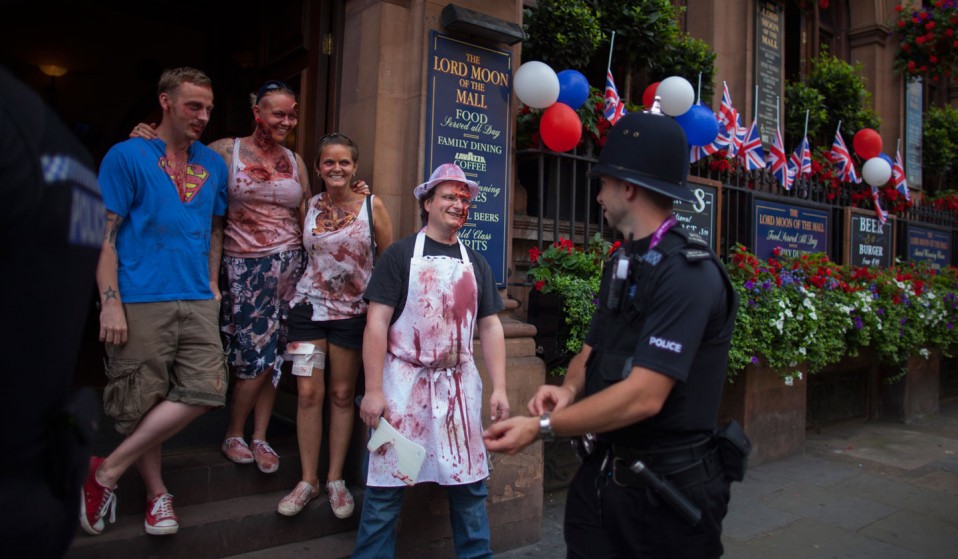 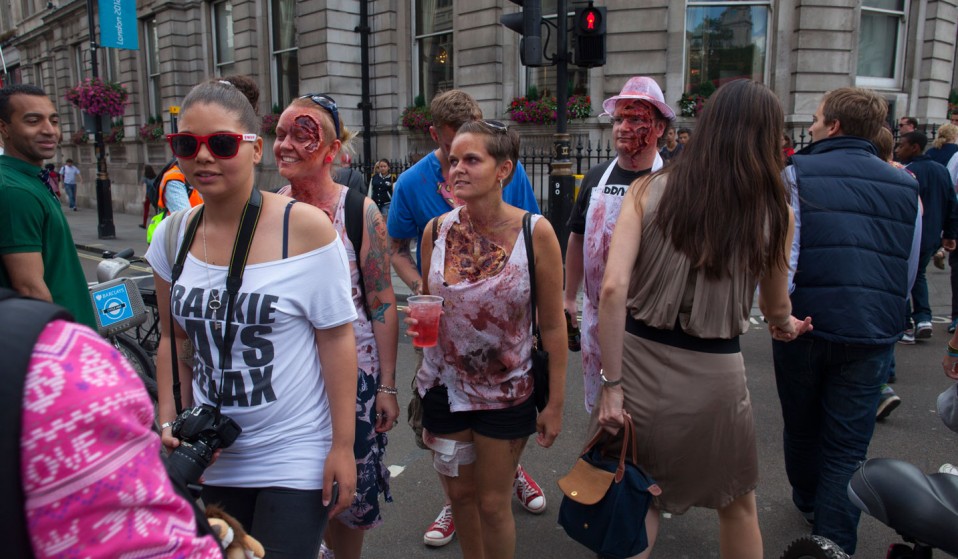 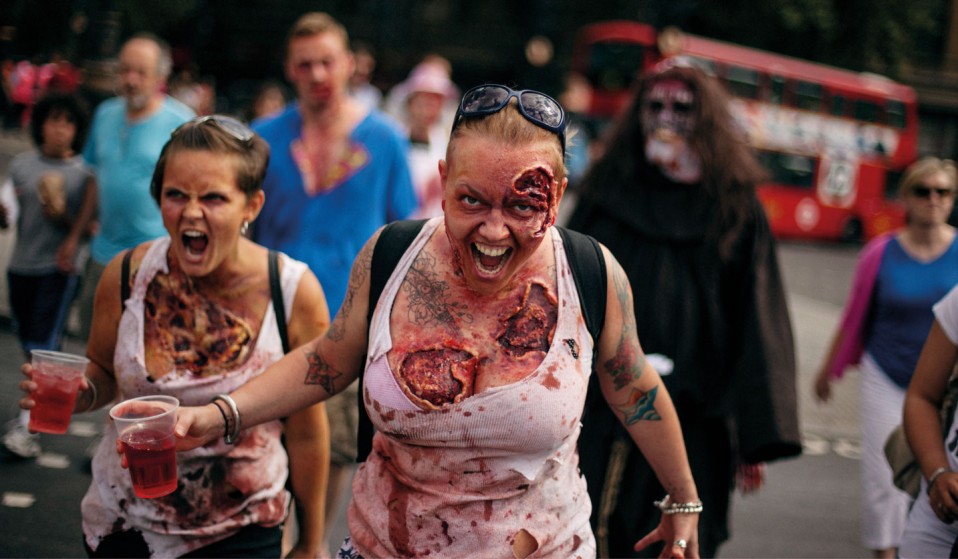 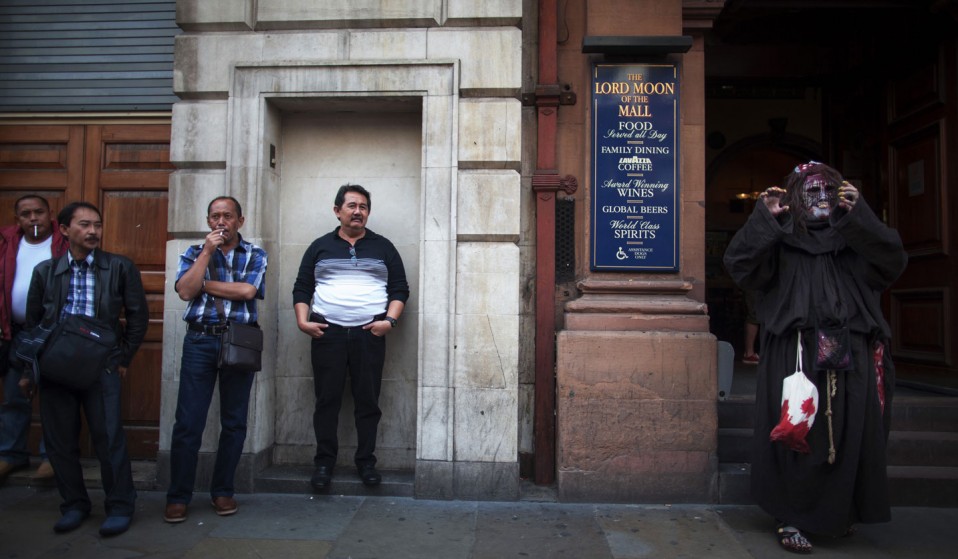 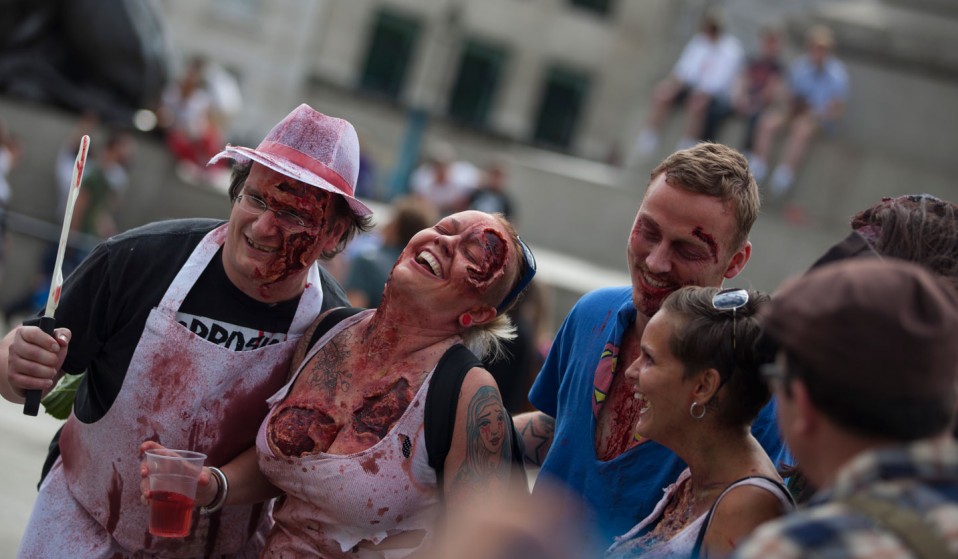 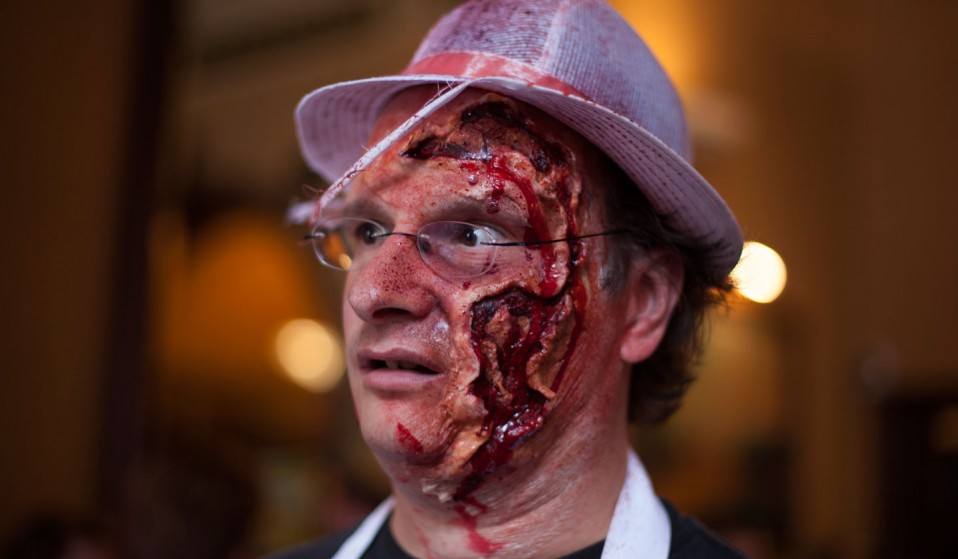 This community of Londoners live like it's Halloween all year-round.

This community of Londoners live like it's Halloween all year-round.

Leanne Hicks doesn’t just watch horror films, she reverse engineers them. “I wonder how they got that effect or what they did to make the blood jet like that. I’ll go research and we try to copy it,” the thirty-two-year-old men’s clothing store manager says. In a pub off Trafalgar Square, she’s upbeat despite her head looking like it’s been blown open and her chest looking like patches of skin were torn from it.

Meanwhile outside the pub, a passerby pays tribute to her work by stopping her brother-in-law Gary Hillier, who she has transformed into a zombie, to check if he’s okay. “It’s really rough in there,” Hillier says.

Hicks and her friends are waiting for more zombies to join them for a pub crawl through London’s West End organised through Meetup.com, a website that its founder Scott Heiferman says uses the internet to get people off the internet. The site helps local groups organise activities ranging from knitting to nude bike rides. The zombie event was organised by members of the London Cosplay and Harajuku group – Cosplay short for ’costume play’ for fans of dressing up as anime or video-game characters and Harajuku in reference to Tokyo-style experimental fashion.

“It’s not really an apocalypse when there’s only four of you,” says Konrad Abel, a zombie butcher with a head hanging from his belt. “But that’s how it gets started,” Hicks replies. This is a warm-up, she says, for World Zombie Day on October 13, when hundreds of zombies are expected to take to the streets. She calls up a photo on her phone showing possibly her most frightening creation: a costume comprised of doll parts that made her pregnant sister’s unborn baby appear to be tearing through her stomach.

“I usually bring a bag full of goodies so I can infect members of the public on the way if they want to get in,” she says. Her first victim today is Paul Little, a Meetup member who had only planned on taking photos. “I love the humour. Most people walk around London like zombies anyway,” he says.

Little joined Meetup only a few months ago, but since then he has played mandolin at folk music jam sessions, eaten out with Asian food aficionados and toured haunted corners of the city. “London isn’t a friendly town,” he says, but adds Meetup has transformed his social life. “Even if you turn up at a place for the first time, you’ve turned up to meet somebody,” he says. “It’s not like walking into a strange room as a complete stranger.”

Linkedin
RELATED ARTICLES
OTHER ARTICLES
To celebrate 10 years of Huck, we're digging through the archives to unearth stories that feel as relevant as ever. When photographer Janette Beckman started documenting underground communities in the US, she had no idea it would change youth culture forever.
The Bots may have been fresher-faced than your little bro, but they've never been babies in the world of punk.
The world's biggest art magazine goes back to its freaky roots for new book Juxtapoz Psychedelic, out now.
The fringes of Sydney culture are captured in Freddie Bonfanti's new Australian misfits zine Eora Country, launching in Doomed Gallery, Dalston, tonight.
Creepy comic art, 1950s B-movies and nature's underworld inspire Canadian illustrator Ryan Heshka who's in a group show at Atomica Gallery next month.
Rebecca Horn‘s kinetic sculptures and high-art films are proof that the act is more worthy than the object.