News & Politics / Where were all the protesters at the Republican Party National Convention? 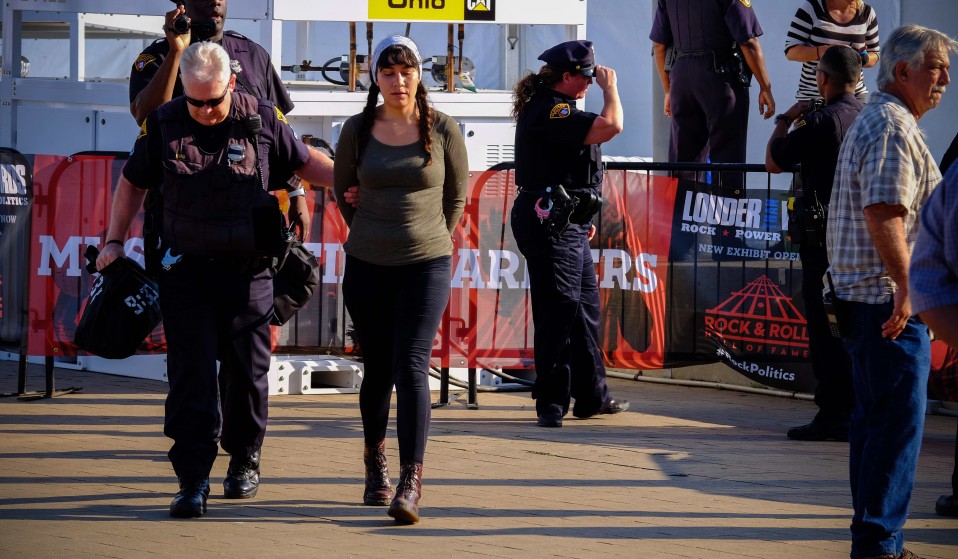 American politics right now is as volatile as it's been for a generation, and Donald Trump - the most volatile of all - has just confirmed his nomination from the GOP. But on the ground in Ohio at the Republican National Convention protests were smaller than expected; is this just the calm before the storm?

American politics right now is as volatile as it's been for a generation, and Donald Trump - the most volatile of all - has just confirmed his nomination from the GOP. But on the ground in Ohio at the Republican National Convention protests were smaller than expected; is this just the calm before the storm?

The Republican National Convention started quietly in Cleveland on Monday, with seagulls coasting in overcast skies above the Cuyahoga River.

Police were prepared with mounds of pre-clasped tiptoes on their belts, while Black SUV’s circled the blocks surrounding the outskirts of Quicken Loans Arena where the convention is taking place — streets were barricaded with 8 foot mesh fencing, dotted at intersections with the City of Cleveland’s Department of Sanitation snow plow trucks fencing in passersby — men in white collars and cornflower ties pointing out landmarks, scraggly protesters, jesus freaks, anarchists, paramilitary types, and all manner of weird zealots.

The city’s downtown is a conglomeration of skyscrapers cut in half by the Cuyahoga river. The Lorain-Carnegie Bridge is a rusty watermark jutting above the mounds of iron ore and decaying refineries, and torpedoing northbound from the city’s west side.

This is where the protests were to ostensibly take place, but as of Wednesday, halfway through the convention schedule, the Lorain-Carnegie Bridge was occupied mostly with law enforcement. Even Prophets of Rage, the supergroup of Chuck D and Rage Against the Machine, drew a paltry crowd of 60 on Monday.

The city of Cleveland estimates somewhere between 5,000 and 25,000 people — attendees, protesters, counter-protesters, delegates, fans, supporters, sycophants, and all manner of homegrown American freaks.

The Cleveland police department has dispatched somewhere in the vicinity of 600 police officers to cover the convention — this isn’t including out-of-state law enforcement or federal agents, which will bring the total number of police to well above 2,000 troops.

By midday Monday, the clouds had cleared and the bright hot sun shone down on the protesters, who began on the west side of the Lorain-Carnegie Bridge, marching along a designated parade route. It takes 50 minutes to cross the bridge. The turnout was subpar by the protester’s standards — by the second day, any scheduled protests across the bridge were cancelled due to poor attendance.

There is a huge geographical void between these opposing groups — and this is not a mistake — it is a carefully crafted strategy by law enforcement and the GOP. The serious, rank-and-file Republicans — the Alex P. Keaton types — and the elected officials are enclosed within a few blocks of the Quicken Loans Arena.

The Libertarians, wing nuts, Bikers for Trump, and paramilitary types are parsed a few blocks away near the Cuyahoga Flats waterfront at Settler’s Landing, and the protesters are relegated to the Lorain-Carnegie Bridge. Its almost impossible to get to the bridge from the arena — law enforcement has barricaded all roads and sidewalks so that pedestrians have to walk almost a mile to reach the arena area of downtown.

Sitting in the Clevelander Bar & Grill, drinking a cold beer and getting out of the sun while one subversive patron put the Dead Kennedys’ “Nazi Punks Fuck Off” on the jukebox, CNN and MSNBC report that “chaos erupts on convention floor”, while groups of Republican delegates from Colorado and California filled the bar.

Members of the leftist I.W.W. or International Workers of The World, brandishing red flags, chanted “Nazi Scum! Nazi Scum!” at Jones after he gave an inflammatory speech in the square. The I.W.W. members claim that Jones intentionally lost his balance in an attempt to appear victimised. Jones has claimed on his website that he was attacked.

Adrenaline was high on all sides as police blocked bystanders from entering or leaving the park, eventually forming a park-wide human barricade. At one point there were more police than civilians.

And that is the crux of the convention — more law enforcement than civilians. Law enforcement from over half the United States have been represented. The mood in Public Square, if one weren’t aware of the happenings, would lead one to believe this was a cop convention.

Open-carry protesters were few and far in-between. One young man by the name of Jesse Gonzalez came down from the affluent Cleveland neighborhood of Lakewood early Monday morning with his American made AK47 (minus clip) slung across his back, smoking cigarettes and wearing a Nintendo ‘Duck Hunt’ T shirt while reporters swamped him like sharks on fresh chum.

The only other instances of open-carry guns were from a small paramilitary group in Public Square on Tuesday afternoon, and Micah Nazari, a Muslim man from Yellow Springs, a burnt-out hippy town in Southern Ohio.

The banality of the crowds — the open-carry activists, the goateed Trump Train plebians dressed in their American flag garb, the sun-tanned rank-and-file Republicans in their expensive suits, the journalists scrambling to get their shots of the freaks and weirdos and interview the sycophants, the overwhelming law enforcement presence — creates a certain sort of sickly sweet aura of a county fair on acid. This is one of the main nerves of the American Dream that Hunter Thompson spoke about — a weird and frightening scene punctuated by whichever ideology one can deem more strange.

The largest contingent by far is the police — which calls to mind some sort of sanctioned American police state with a price tag to the tune of $93 million.

What is the underlying meaning? What is the reason for this mess? Chris Matthews — that horrible neoliberal commentator for MSNBC — is sitting in patio chairs outside of the Clevelander, wearing a yellow hat and reading some New York Times Bestseller I can’t make out.

And that, I think, is the crux of this whole situation — some corporatist journalist relaxing in a patio chair, while a bunch of shill journalists scatter and run towards the incendiary like flies on shit, while a bunch of authoritarians in waiting — Trump himself being the top dog — hope that their time has come. That America, greased and primed for world domination, is finally ready for its final curtain call.

Linkedin
RELATED ARTICLES
OTHER ARTICLES
AI companies that develop image-generators using copyrighted artwork from the internet are coming under fire from artists who say that it amounts to theft.
As she gears up for the release of her first book, the 24-year-old climate activist talks standing up to authority and building a more inclusive movement.
Filmmaker Laura Poitras discusses her new documentary which traces the remarkable life of the artist-activist and the impact of her battle against the US opioid crisis.
A recent High Court ruling against the right to wild camp in Dartmoor National Park sparked the largest land protest in history – and campaigners say their fight is not over yet.
Author Edward Banches dicusses his new book, which examines the hard rock and metal scenes in five African countries: Botswana, Togo, South Africa, Kenya and Ghana.
After blocking the Scottish government’s gender recognition reform bill, Westminster is now devising further changes to the law to make it harder for trans people to self-identify.