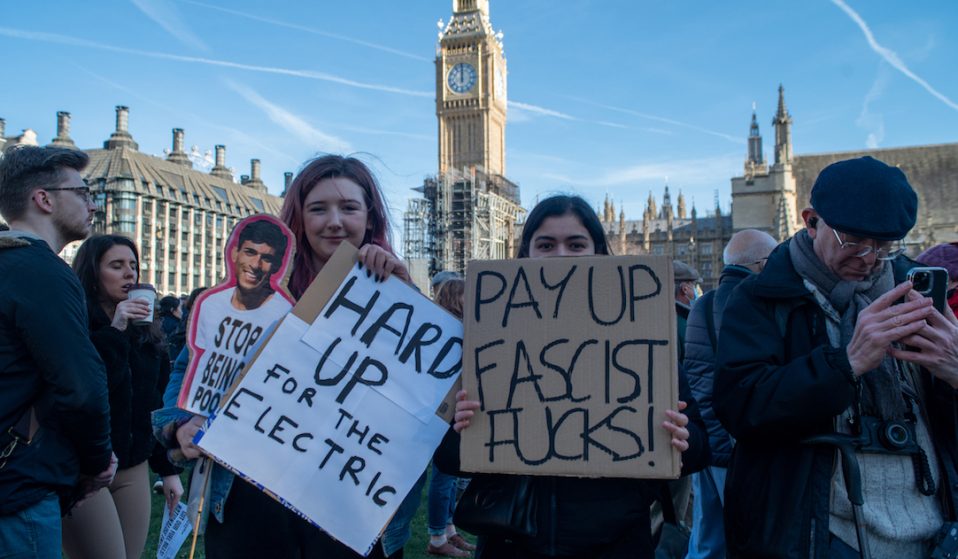 The Chancellor’s Spring Statement offers very little to those hit hardest by the cost of living crisis and soaring energy prices.

The Chancellor’s Spring Statement offers very little to those hit hardest by the cost of living crisis and soaring energy prices.

Today Chancellor of the Exchequer Rishi Sunak gave his Spring statement in the commons, updating the house on his budget, growth and unveiling a new “tax plan”.

The statement comes as inflation reaches 6.2 per cent – the highest in 30 years with warnings it will continue to rise, and increase costs, in the coming months. Alongside this, energy prices are currently soaring to record levels (the energy cap is due to rise but around £700 per year for average families from April). The government’s catastrophic handling of the pandemic and the lasting effects of a decade of austerity have all served as the perfect storm for working people.

Thousands have gathered on the streets while members of the commons and the Lords, civil society, campaigners and organisers have all tried to exert political pressure to get the Chancellor to act. This was his chance. So what did he deliver? Nothing.

Well, close to nothing. The much-derided rise in National Insurance has been slightly dulled by raising the threshold which people have to start paying it (to £12,500). It equates, Sunak says, to “a £6bn personal tax cut for 30 million people, and the largest single tax income in a decade”. Torsten Bell, Chief exec of the economic thinktank, the Resolution Foundation, pointed out that the cut was mainly for high and middle earners, with only one in every three pounds going to the bottom half of earners.

Elsewhere, Sunak introduced a raft of tax cuts for business. On the cost of living crisis, he announced a scrapping of VAT on solar panels, heat pumps and insulation as well as an extra £1 billion in the household recovery fund. (For context Sunak recently wrote off £4 billion in Covid finance fraud). Sunak also announced a 5p cut in fuel duty for 12 months – a move as environmentally regressive as it is minimal.

This was a budget for the rich. One that benefited those who already owned homes or cars. One that gave handouts to the rich but wilfully ignored the poorest in the country. A failure to uprate benefits beyond the 3.1 per cent rise planned this year, for example, will see a real-term cut for those already in poverty. This is before the impact of the cost of living crisis in its entirety is felt by working people. Many millions will be forced into poverty because of inaction.

The Labour front bench response, led by Shadow Chancellor Rachel Reeves, began with conversations about the implementation of a windfall tax on gas and oil companies, which have seen profits skyrocket as energy prices rise. The rest of her response was a relatively tepid affair peppered with cringe-worthy ‘jokes’. But elsewhere in the house there was fury.

Labour MP for Coventry South Zarah Sultana pointed out that Sunak was the richest member of the commons but was doing nothing for the working people of the country. Alison Thewliss, SNP shadow chancellor, gave a fiery speech in which she touched on the plight of the millions who use prepayment meters for their energy (and who already pay a higher rate). “I suspect the Chancellor has never had a prepayment meter, I’m not sure they fit them to swimming pools,” she said.

"I don't know if the Chancellor has ever had a pre-payment meter, I don't think they fit them for swimming pools"

Other members spoke of their disabled, elderly, and poor constituents, all of whom face a terrifying future with no material support from an uncaring government. Green MP Caroline Lucas pointed out that the statement failed to mention the climate once, despite the ongoing climate crisis and the government’s purported commitment to mitigating it.

The cost of living crisis will force millions into poverty. Money Saving Expert founder Martin Lewis, who has been consistently critical of the government’s response to the crisis, has predicted six million could find themselves in fuel poverty because of rising fuel prices.

Without support, the coming months will see the minimal living standards of those already below the poverty line fall even more. It will kill people, through starvation and through cold. There is another way. People are organising to fight back. Groups like People’s Assembly, Fuel Poverty Action, Disabled People Against the Cuts and others have come together to force the government into action. Now is the time to join the fight.

Linkedin
RELATED ARTICLES
OTHER ARTICLES
As the Criminal Bar Association enters its fifth week of action, criminal barrister Russel Fraser explains why the legal professionals have walked out and how action is likely to escalate.
With the UK now set to run out of vaccines, people working in the sex industry – particularly outside of major cities – have been left especially vulnerable, reports Brit Dawson.
From the chip shops, to the bingo parlors and burlesque dancers, photographer Mike Coles remembers capturing scenes of holidaymakers by the English coast.
With the virus now a global health emergency, we must take steps to fight misinformation and demand a swift UK-wide vaccine roll out, writes Phil Samba.
Photographer Bud Glick recounts documenting everyday life in the area, and what it taught him about the Chinese immigrant experience.
The government’s brutal crackdown on NGOs has left victims of rape without anywhere to seek help. And now, as the country plays a key role is Russia’s war, things are only getting worse.